When it comes to intensity, violence, big action set pieces and hyper masculine energy, nothing quite compares to the Gears of War franchise. With the original being released 10 years ago and several successful games in its lineage since, the excitement for this particular Gears fanboy to get stuck in to Gears of War 4 was palpable. While the additions to multiplayer and Horde 3.0 show how far the series has come with its understanding of team-based tactics, the campaign plays it relatively safe. A great introduction to the series for newcomers and a big hit of nostalgia for those of us that made Gears the success story it is today, it’s more of the same ballsy, in-your-face action, but it doesn’t push the envelope or tear through boundaries like it used to.

The game kicks off with a prologue designed to catch you up on what happened in the past during the Locust War, which was resolved in explosive fashion at the end of the previous trilogy. It reintroduces you to some old favourites and serves as an effective reminder of how far the world has come and the battles of old. Enter JD Fenix, son of the much-loved Marcus, who along with Kait and Del makes up your crew for the majority of the experience. They’re on the run from the Coalition of Ordered Governments, who are now essentially on a big power trip, while another threat known as the Swarm are looming ominously, getting stronger and more vicious with every passing minute. It’s not a ground-breaking story, but it sets the right tone.

What follows is a fun but formulaic adventure, beginning with the COG as your enemy who drop robot sentinels known as DeeBees from the sky, the trickiest of which will propel towards you before exploding. Then comes the Swarm, who are basically the Locust with a new coat of paint. While there is some variation in the types of enemies you’ll face, they mostly work the same way as in the previous games. Emergence holes need to be closed with grenades, and foes progress from basic Drones, to Hunters with snipers and torque bows before finally getting some variety. Pouncers leap from place to place before trying to pin you down and rip your face off, and Snatchers will hold you inside their body until you can be saved by your comrades.

The AI feels a lot more aggressive this time around; they’ll come right at you and force you out of cover, in some cases leaping over and right into you, especially on harder difficulty settings. Most chapters will have you moving from area to area, killing enemies until you hear the classic guitar riff signal that the area is clear, but the campaign does have some surprises to keep things interesting. I won’t spoil them, but some fast-paced chapters have allowed for the development team to have some real fun with the source material.

Also changing the pace occasionally are chapters that require you to fortify your defences, building turrets and barricades while defending a specific area, like in Horde mode. Overall, there are efforts that have been made to keep things fresh, but the campaign certainly feel comfortable and predictable otherwise, which is either a good thing or a bad thing depending on how much you love Gears in general. 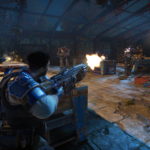 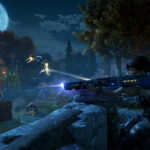 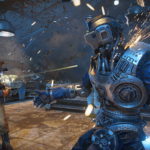 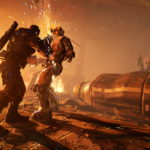 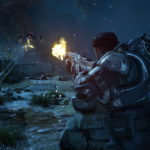 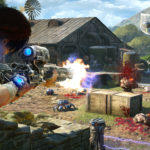 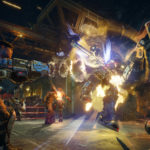 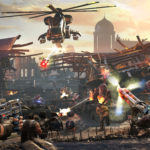 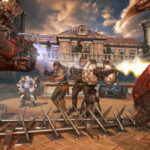 Where Gears has always found its longevity is within its multiplayer suite and the same can be said again now. Competitive multiplayer has always gone at a slower and more methodical pace than what you would find in a game like Call of Duty, with symmetrical maps, lots of options for cover and power weapons spawning in set positions. Along with your expected death matches, new modes enter the fray, like Arms Race that forces you to get kills with specific weapons one after the other and Escalation which has you controlling territories in an attempt to achieve total domination of the other team.

Horde mode is also back in Gears of War 4, much to the pleasure of fans everywhere. The 5 player mode works in a tower defense style, where you must build turrets, barriers and more, with the difficulty and volume of enemies increases with every wave. Every ten waves a random boss attacks, ramping up the tension, with the goal being to survive with your mates for as long as possible. The addition of a class system will have you considering your options within the team. The Fabricator that you can build from can also be placed anywhere, so you now have the option of where the best spot would be to dig your heels in.

“… the remains of your foes will get swept up and blown away in a delightful hurricane of debris and fleshy bits.”

Gears of War 4 is a great-looking game, although the effect is nowhere near as jaw-dropping as it was when the original debuted. It runs smoothly with a large amount of chaos happening on screen, and weather effects in particular look gorgeous, with Windflares and lightning storms happening at regular intervals, causing a literal change in the environment. Grenades and other projectiles stray off course in the wind, objects knock enemies around and the remains of your foes will get swept up and blown away in a delightful hurricane of debris and fleshy bits.

The sound design is also exemplary, with an epic soundtrack to match the epic scale of the battles. There is lots of back and forth banter between your squad and plenty of handy audio cues that let you know the types of enemies that are around, the weapons they are using and what to expect next. Once you’re familiar with all of the different sounds, they’ll make you hyper aware, whether it’s the buzzing sound of the new Buzzkill which shoots buzz-saws that can turn you to mush in a second or the beeping of the Dropshot that can land on you from above with a large explosion.

It’s difficult to be critical of a thematic experience that is as competent and well put-together as Gears of War 4. From the moment it starts, there is a level of focus and engagement that makes everything feel tight and with purpose; if this would be your first Gears experience, it’s a bloody good place to start. For long-time fans though, what you’ll have is a solid campaign that goes through the motions a little bit combined with a multiplayer mode that will have you fighting hordes and destroying other players for hundreds of hours. Gears of War 4 knows exactly what it is: An exhilarating and satisfying cover-based shooter that is aggressive, action-packed and filled to the brim with features that fans will love. When it comes down to it, that’s all this Gears lover could ever ask for.