Jakob: Dishonored 2 is the highly anticipated sequel to Arkane Studio’s initial masterpiece in 2012, and I am glad to say that it doesn’t disappoint. Set fifteen years after the events of Dishonored, Corvo has successfully restored Emily to the throne after being framed for her mother’s murder and Dunwall has seemingly flourished under her rule.  That being said, a gruesome series of murders, conducted by the “Crown Killer”, has been targeting Emily’s enemies, leading many of the populace to believe that Emily and Corvo are responsible.  You enjoy a brief (and I mean brief) moment of peace as Emily and Corvo before a whole new supernatural crisis emerges in the form of Delilah; a witch claiming to be Jessamine’s older half sister. Delilah proceeds to usurp the throne, you take your pick of either Corvo or Emily to play, and she promptly turns the other to stone. 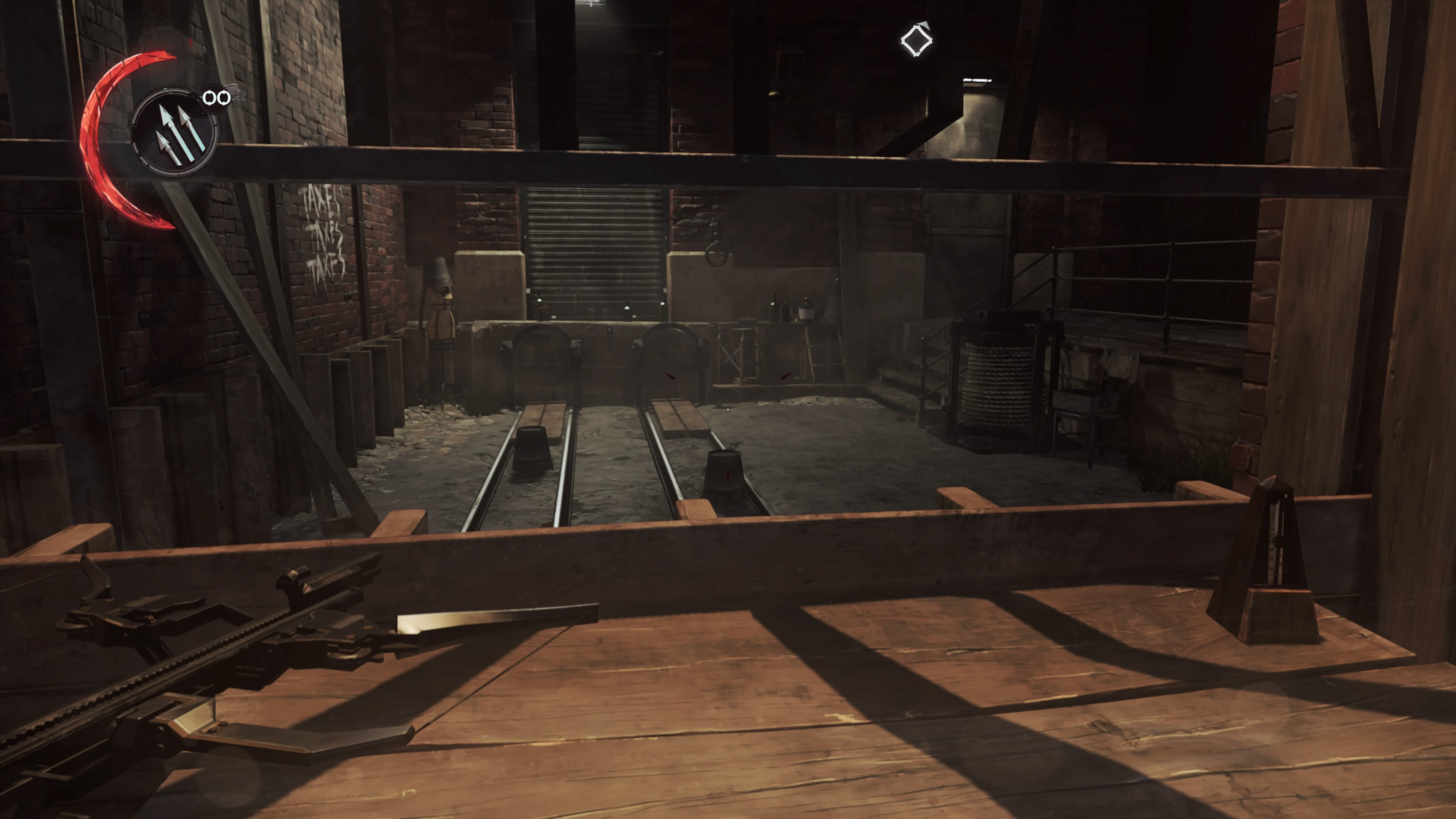 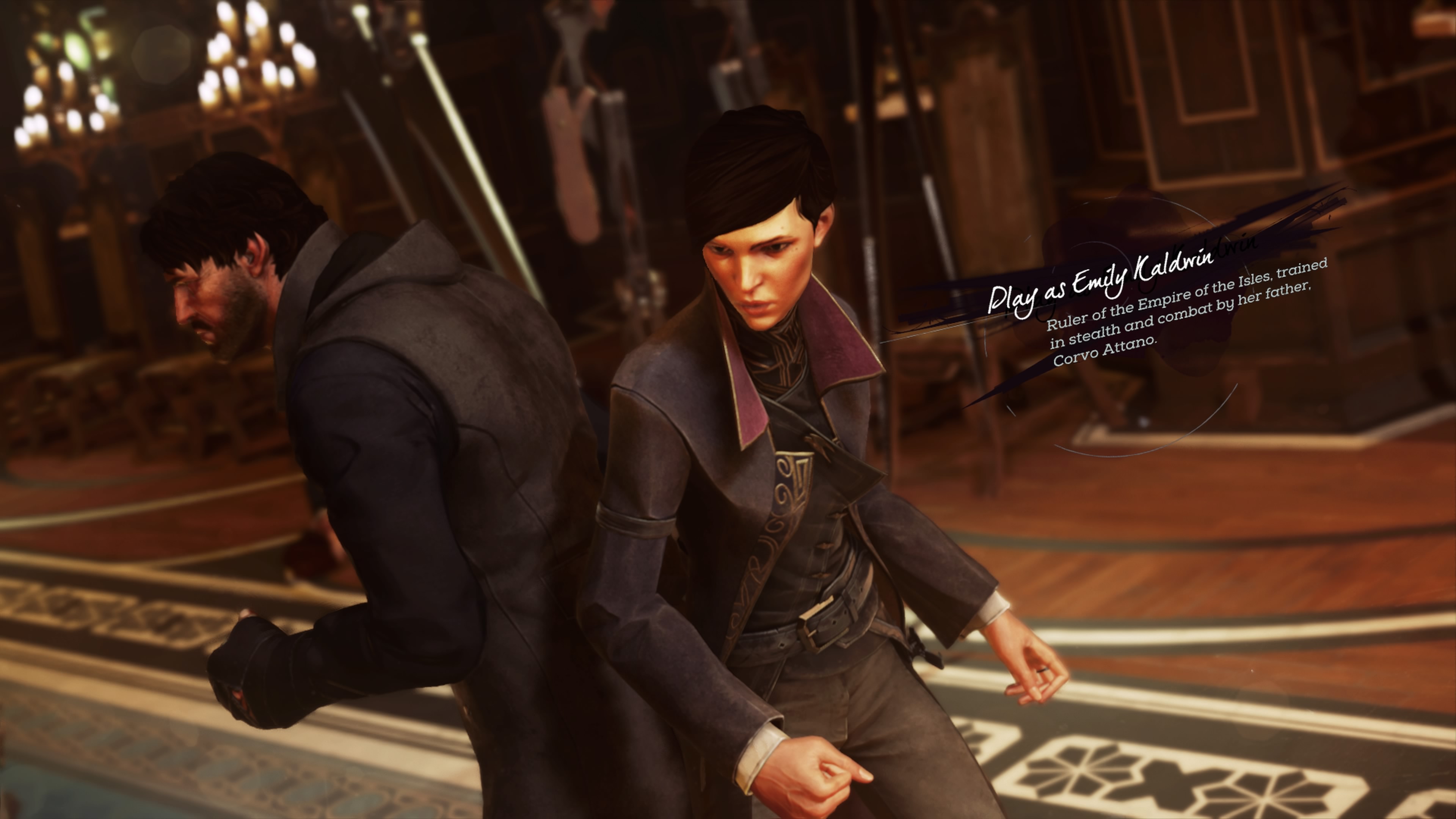 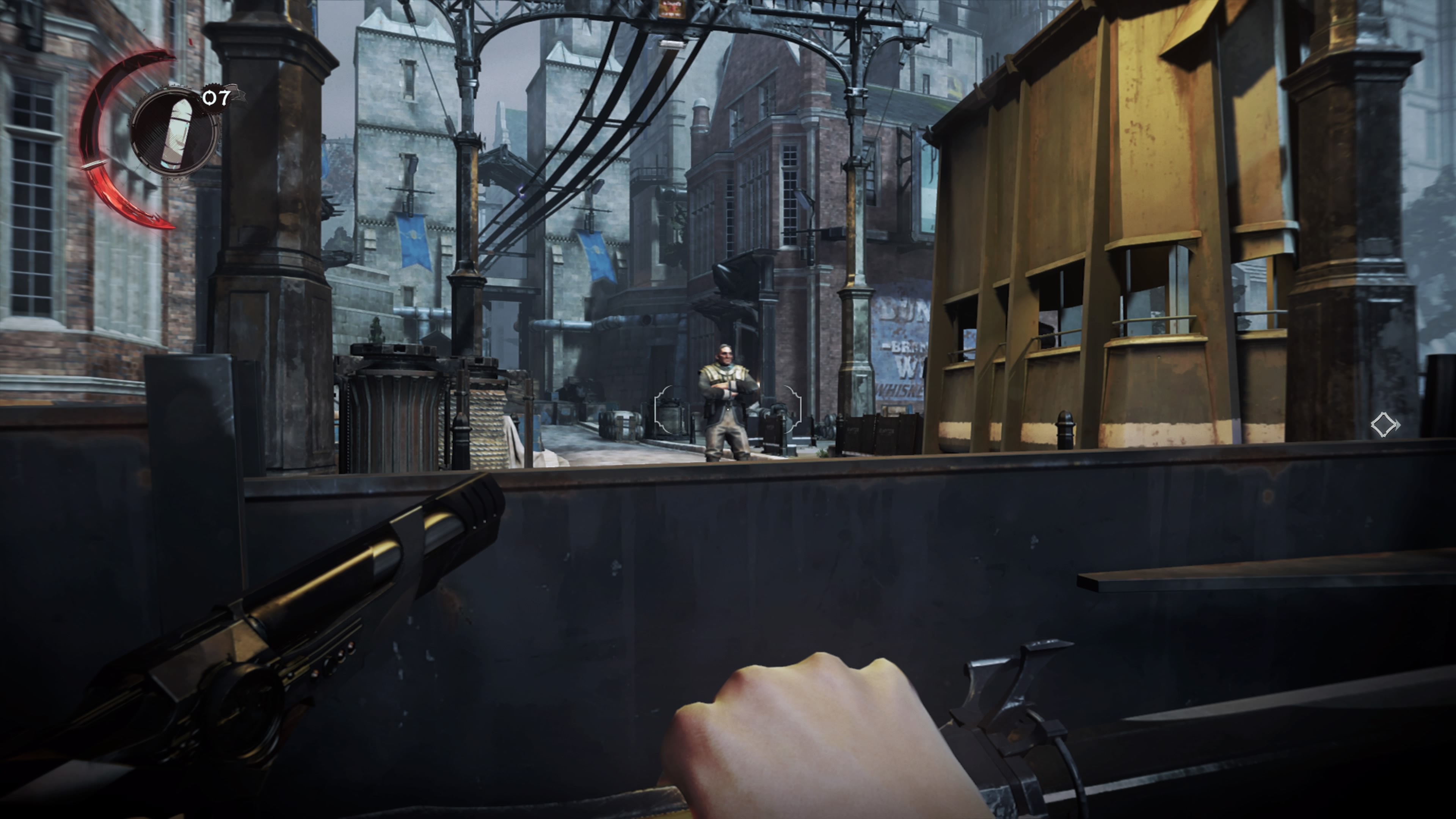 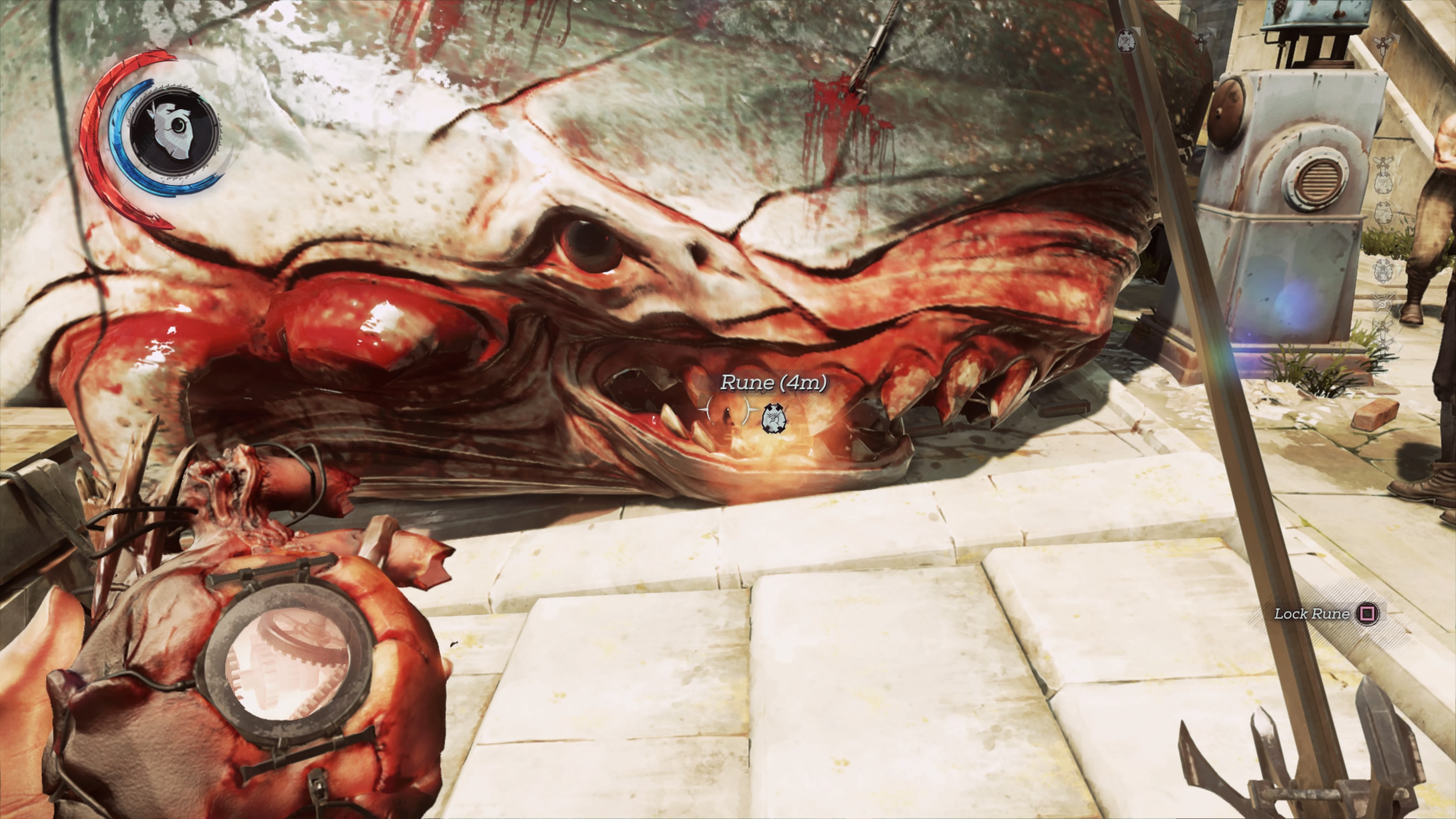 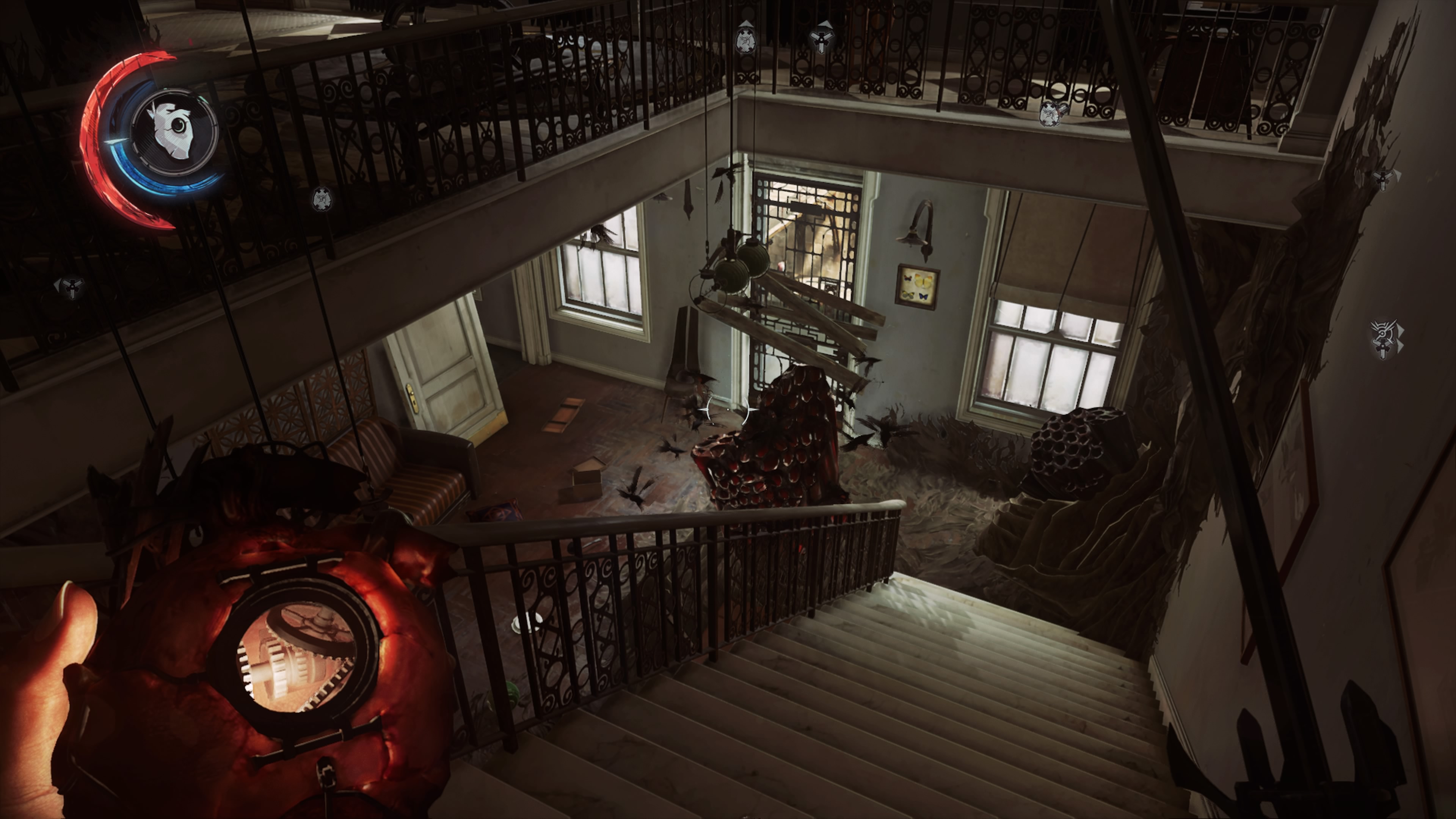 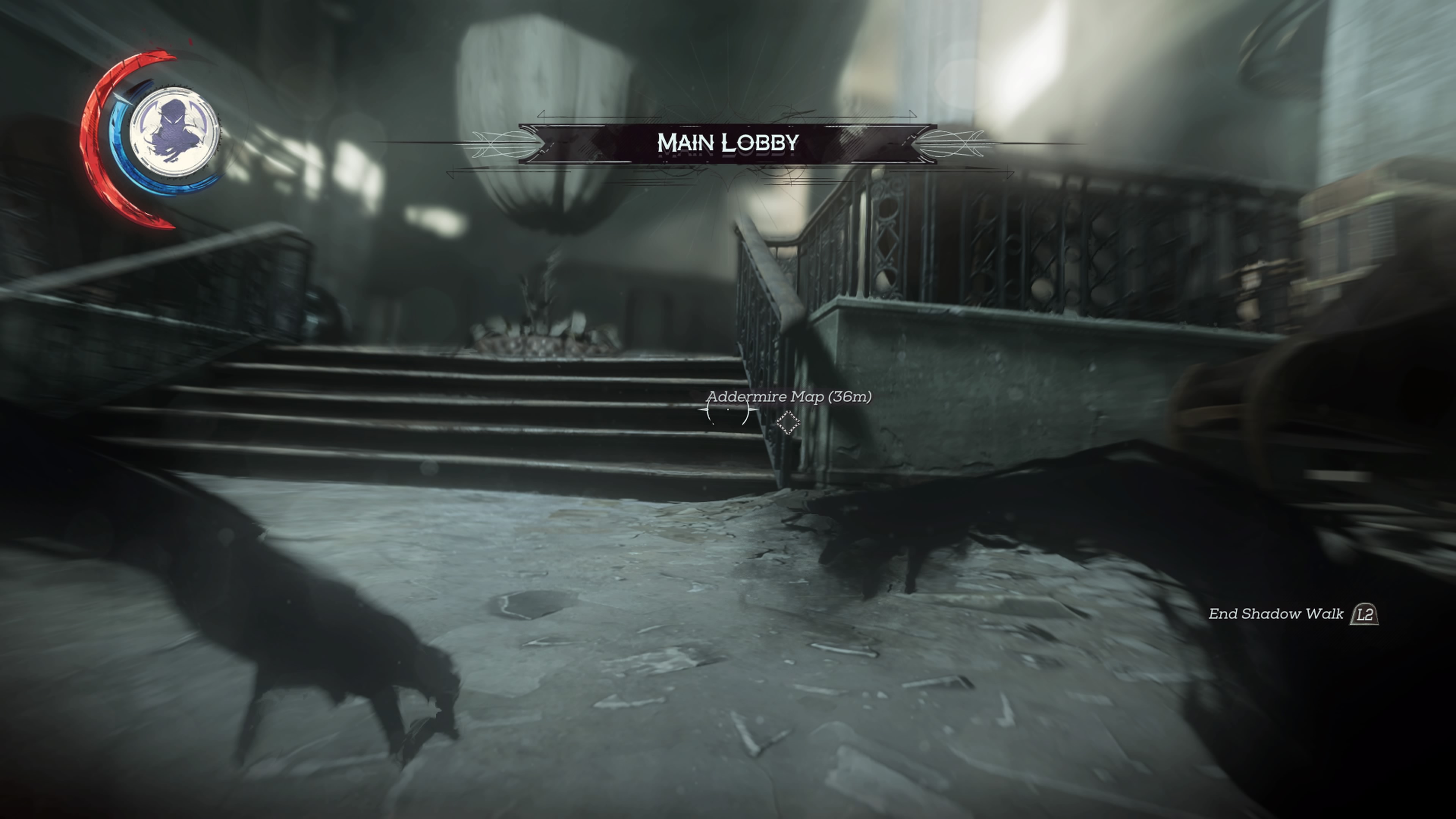 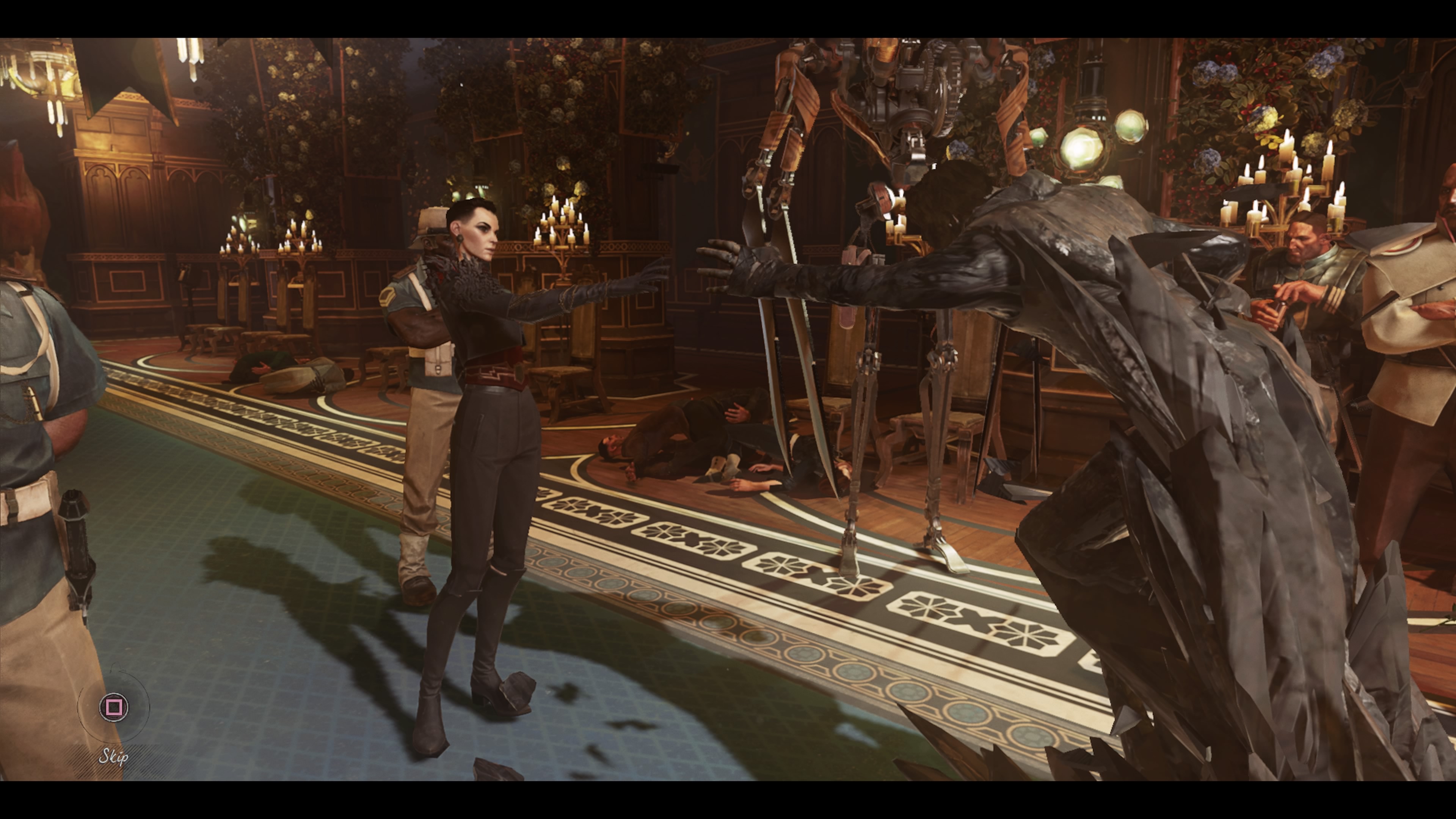 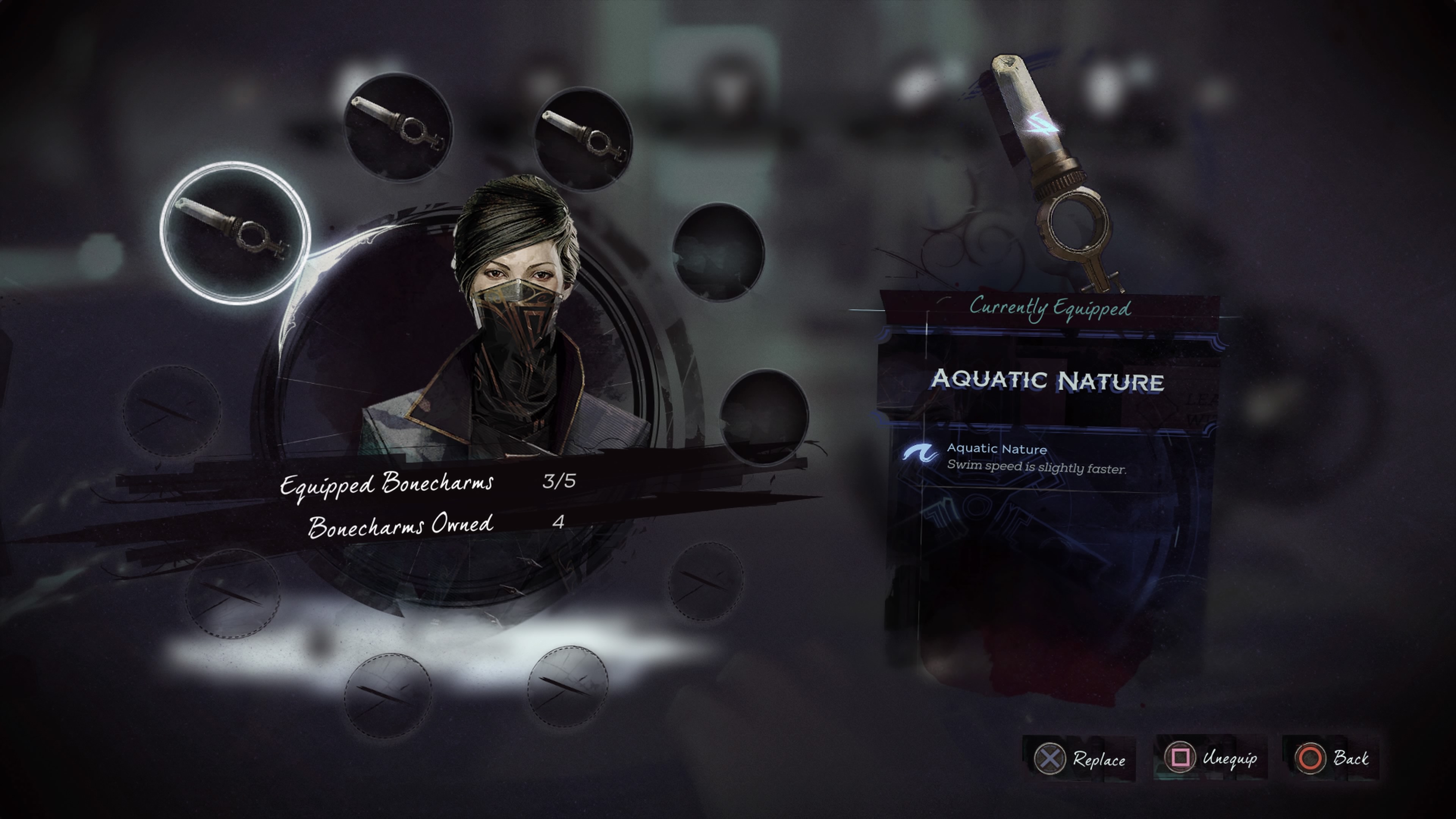 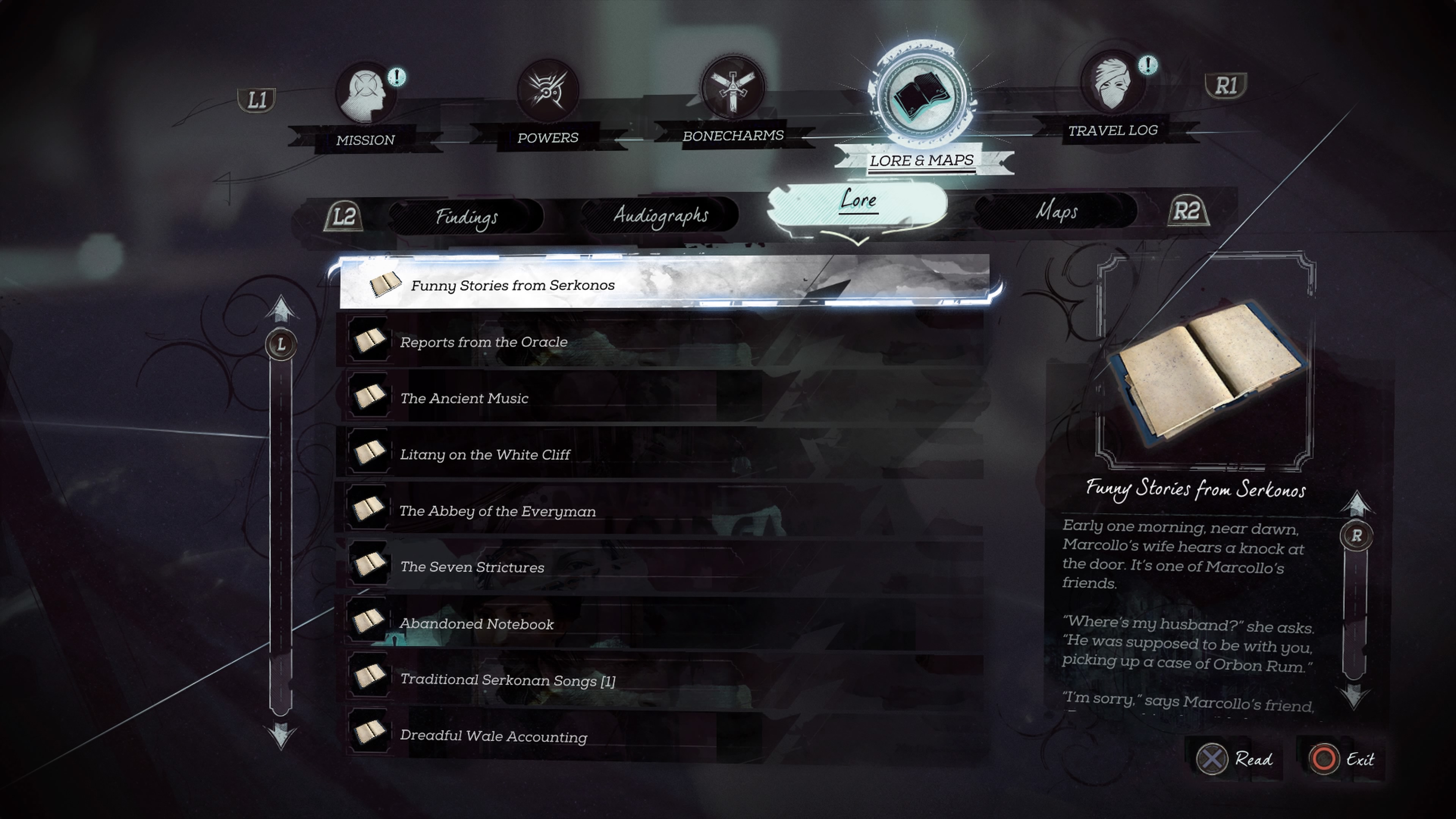 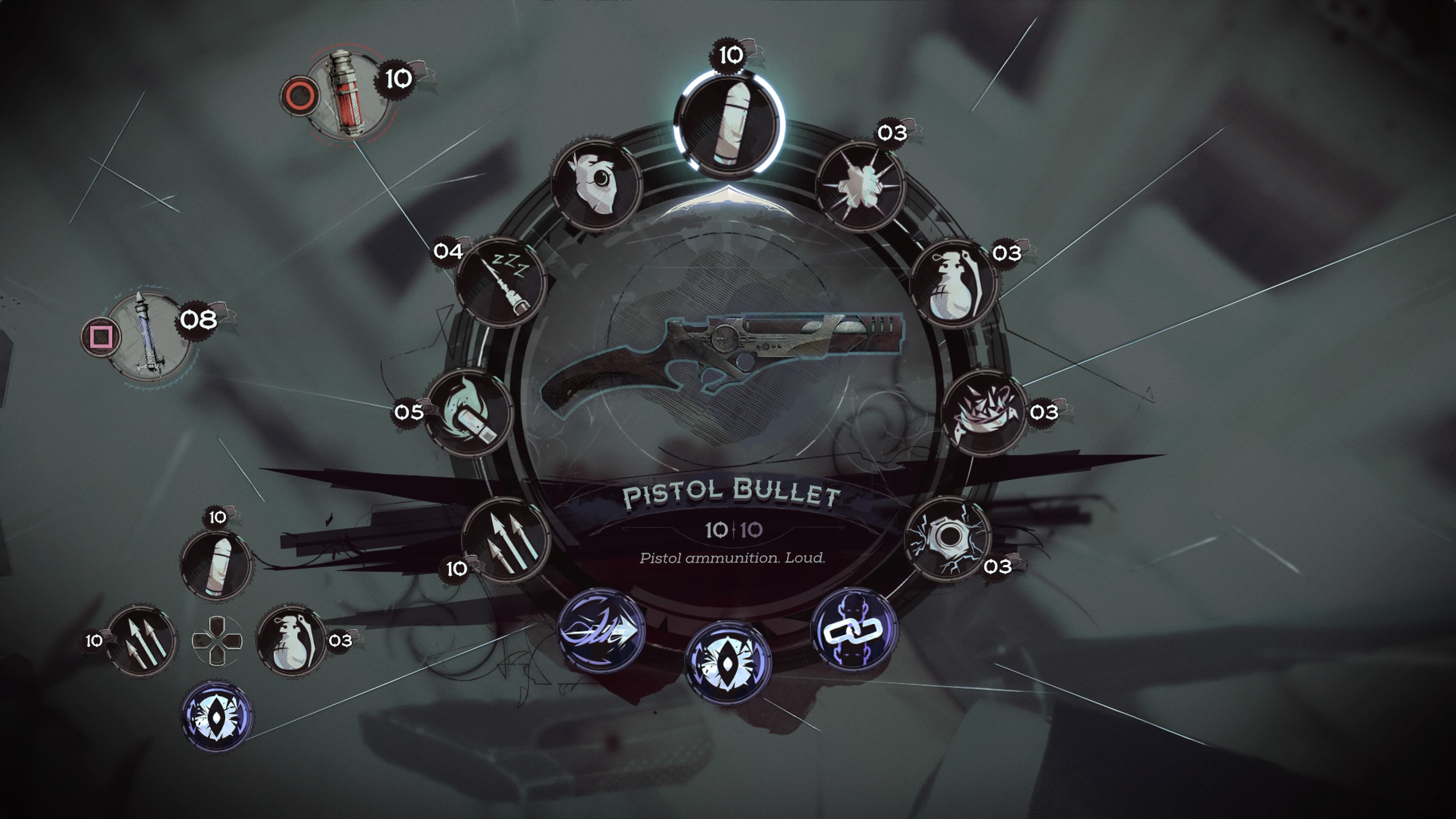 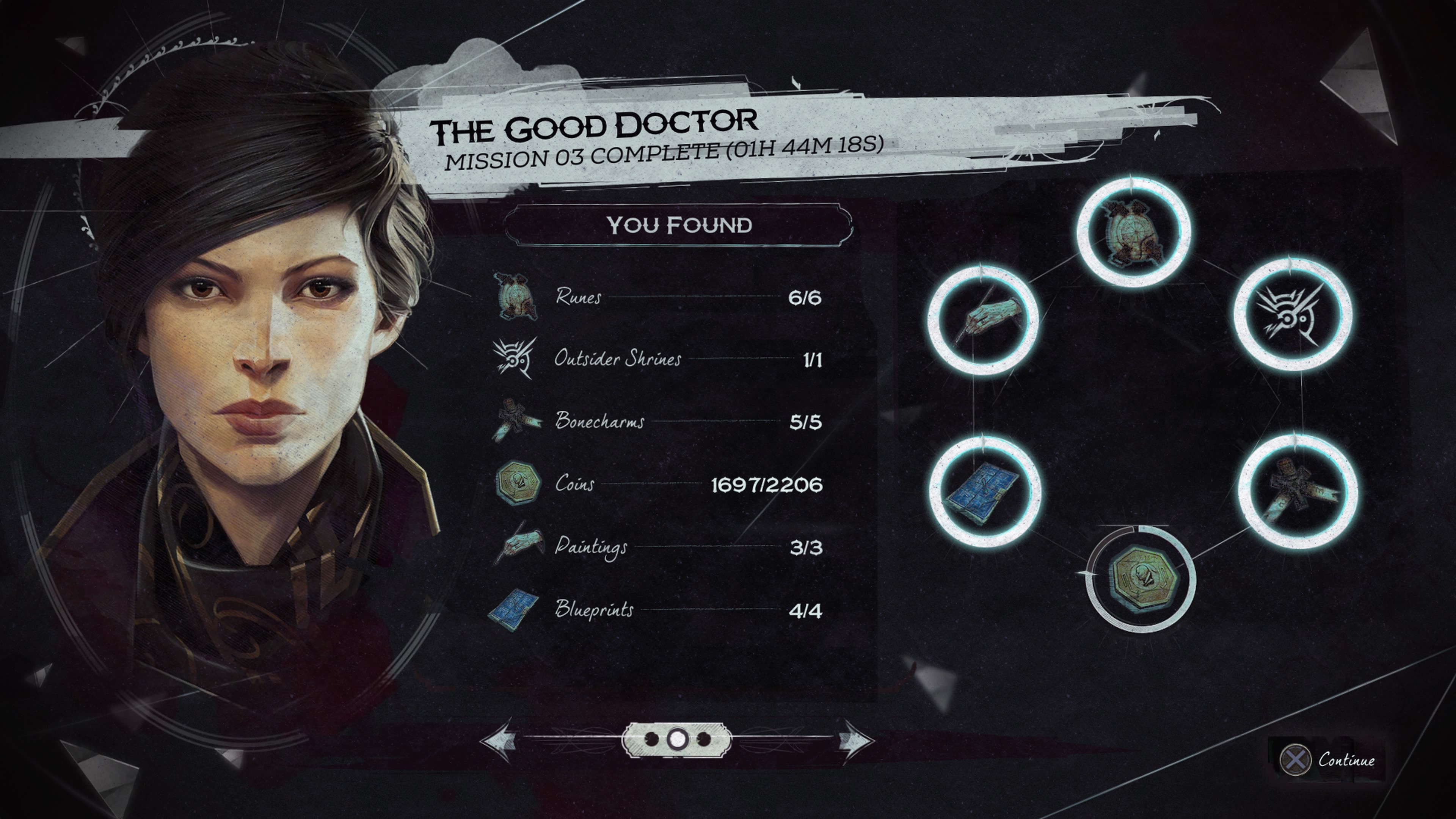 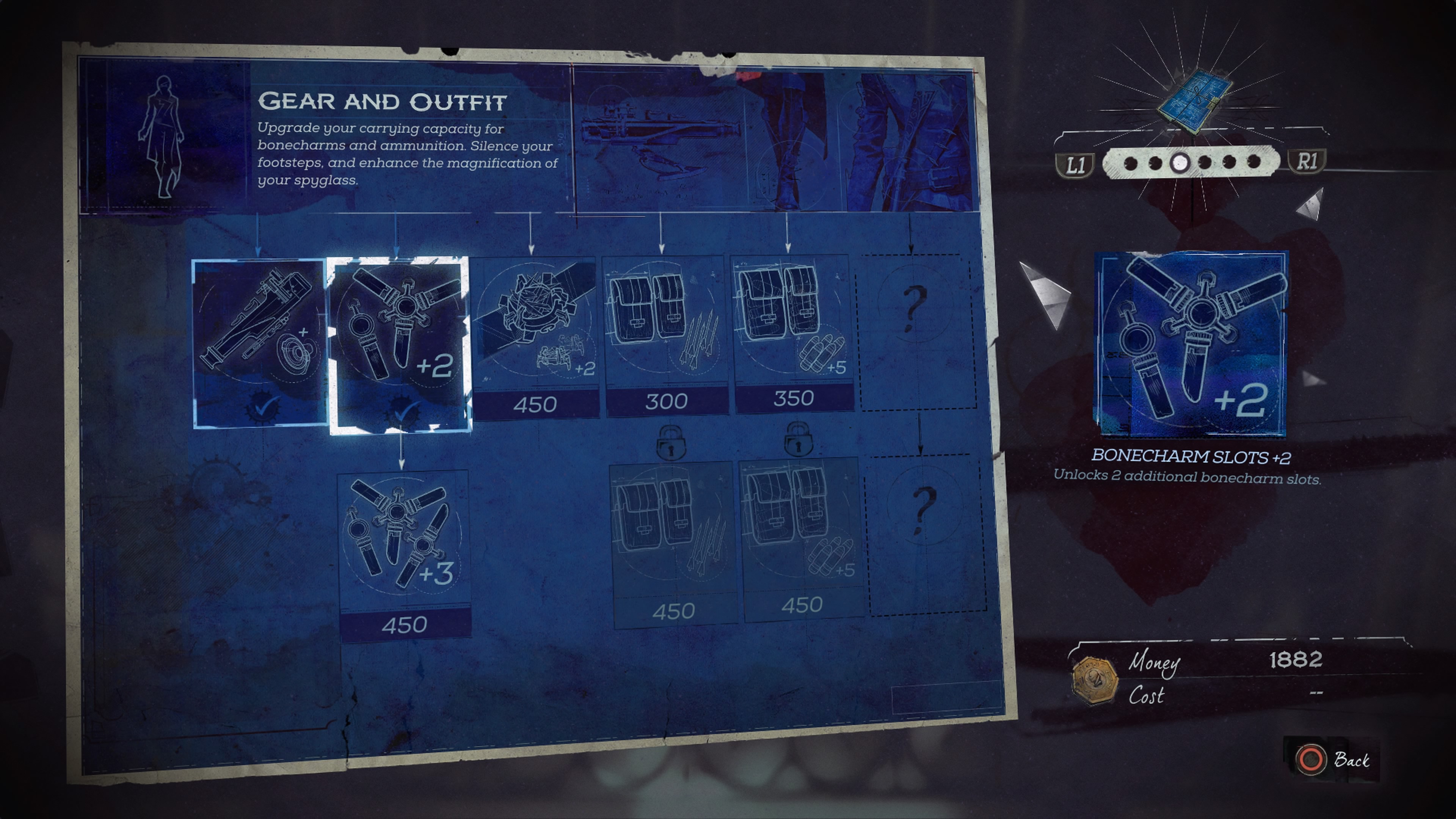 Luke: The game mixes a variety of different mechanics, including powers of the supernatural variety combined with your standard guns and your crossbow. The trademark freedom to play any way you wish is back, which means there are multiple different paths you can take. Going in guns blazing is certainly an option, killing all foes that you come across and assassinating your main targets for those who are bloodthirsty. You can, however, choose the stealthy approach; knocking enemies unconscious and trying your best not to really kill anybody. Dishonored 2 will grade you on this and give you a Chaos rating that impacts the end-game, but regardless of this it just feels fitting that with so many options at your disposal in terms of powers and weaponry that you can tackle missions via many creative paths. There’s also lots of secrets to behold thanks to the game worlds huge feeling that features lots of verticality and dense, detailed environments.

Jakob: Emily Kaldwin is the newest addition to the Dishonored family and is everything that a heroine should be. Both the rightful queen and an assassin of equal strength and supernatural power to her father, I really enjoyed the dialogue that accompanied her version of the storyline, she is someone who bears her responsibilities with grace despite the urge to run away from them. The dialogue also draws your attention to important things as you play, which is a clever technique, so listen carefully.

I felt that her abilities lend themselves well to the stealthier kind of approach, full of misdirection and illusion, and they did help to get a low chaos rating in my second run of the game. Your ranged projectiles certainly don’t give you much variety with stealth, and are rather restrictive in terms of the amounts you can carry. My favourite powers for Emily are as follows:

Far Reach is kind of like Corvo’s Blink ability, allowing her to instantaneously transport herself to distant positions. It can also be upgraded to pull objects such as runes towards you, or even enemies for a midair choke or assassination.

The godsend of stealth runs, dark vision allows you to see your enemies’ pulse and cones of view, even through walls. It can be upgraded to view objects and alarm systems, as well as enemies movement and destinations (if you have aroused their suspicions).

A really cool ability that allows you to link enemies together. This then allows you to target all linked parties with say sleep darts to knock them all out at once. Can be upgraded to link more targets.

Mesmerise allows Emily to open what appears to be a rift into the void and captivate her enemies. While they are drooling, you can sneak by. Can be upgraded to enthral up to 4 enemies at once and last longer.

Luke: The royal protector from the first game and Emily’s father, Corvo will feel very familiar to anyone who played the original. He can use Blink to quickly teleport from spot to spot and possess creatures such as rats. Windblast is a powerful ability that knocks enemies back quickly, but what really makes him fun to play is using his skill of bending time, which slows the world down and allows for moments of clarity amongst the chaos, along with some gloriously sneaky kills. I found Corvo to feel a lot less stealthy than Emily which made me feel better about achieving high chaos; certain areas are swarming with guards and the fact that I’m terrible at stealthy situations made me thankful for some of his more in-your-face powers.

Jakob: The game begins and ends in Dunwall, where the original game took place, but the vast majority of it takes place in Karnaca, the “Jewel of the South”.  Taking inspiration from southern European countries like Greece, Italy and Spain, Karnaca is stunningly brought to life. Scurrying through apartment buildings, research facilities and more, there is so much to take in, and the artistic style lends itself so well to this process.

“…it goes to show how clever the team have been in delicately placing each dark and twisted element.”

It felt to me like I was playing my way through a painting at times, the textures and surfaces of buildings and people often being quite portrait-like, while also being true to what they were. Swimming through water stained with whale blood in the early missions, I struggled to think of any other game where the movement of said water was so natural, and the reflections so crisp and clear.

I can only marvel at what the in house Void Engine has managed to create with the world of Dishonored 2 having replaced the Unreal Engine 3 used in the initial game. Changes in tech may worry some, but the original artistic identity is maintained, and indeed, enhanced in this sequel. 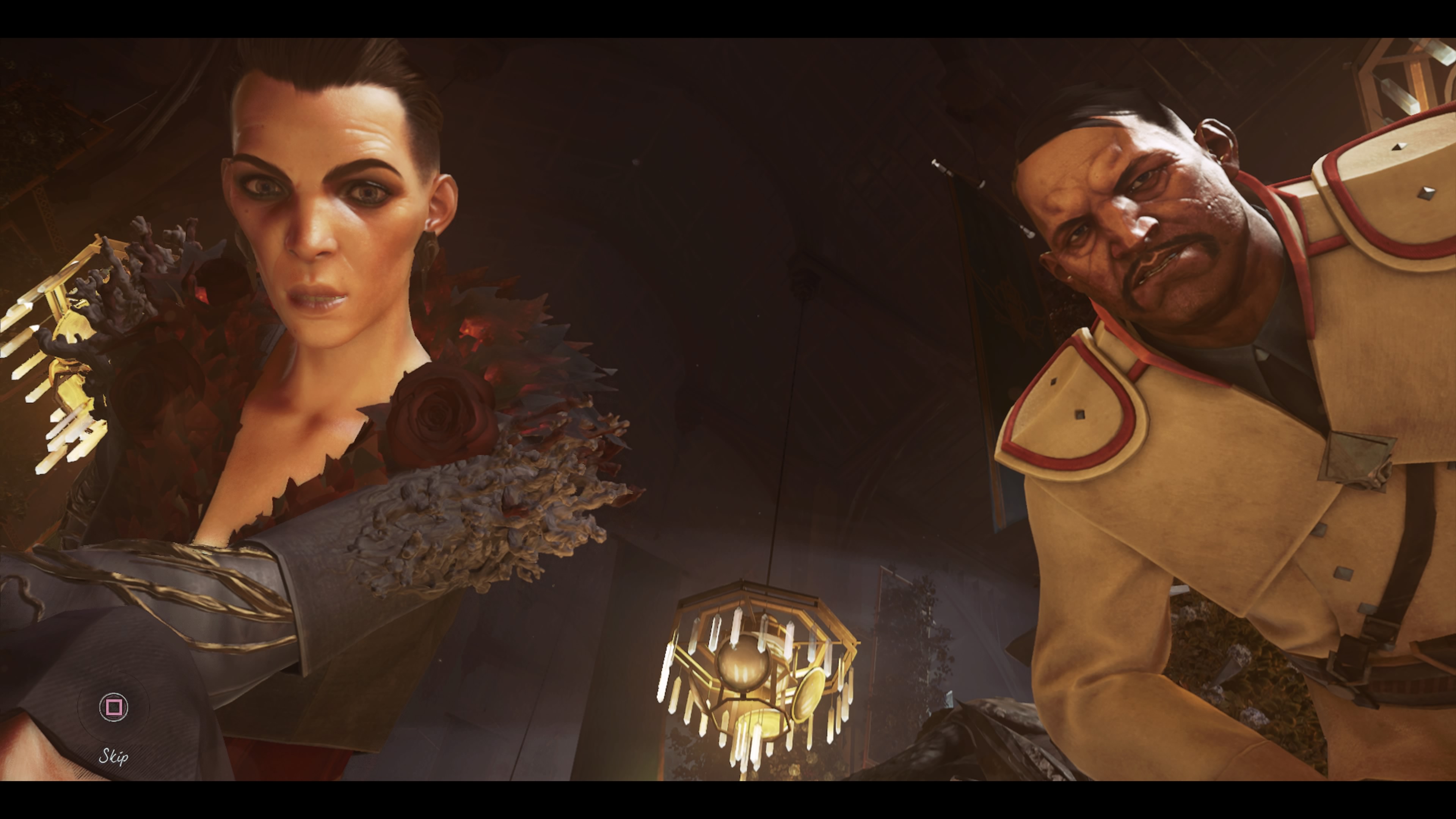 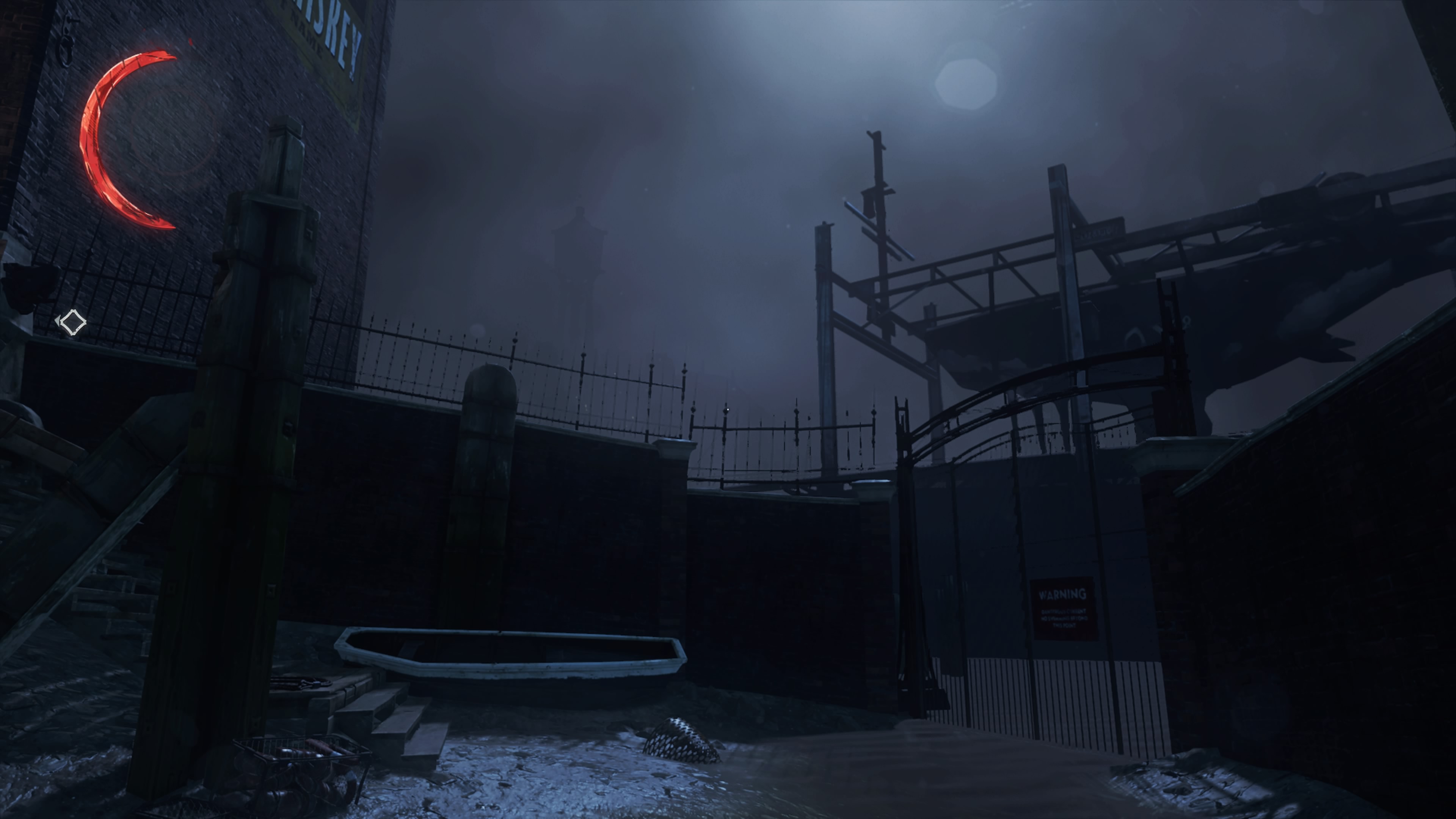 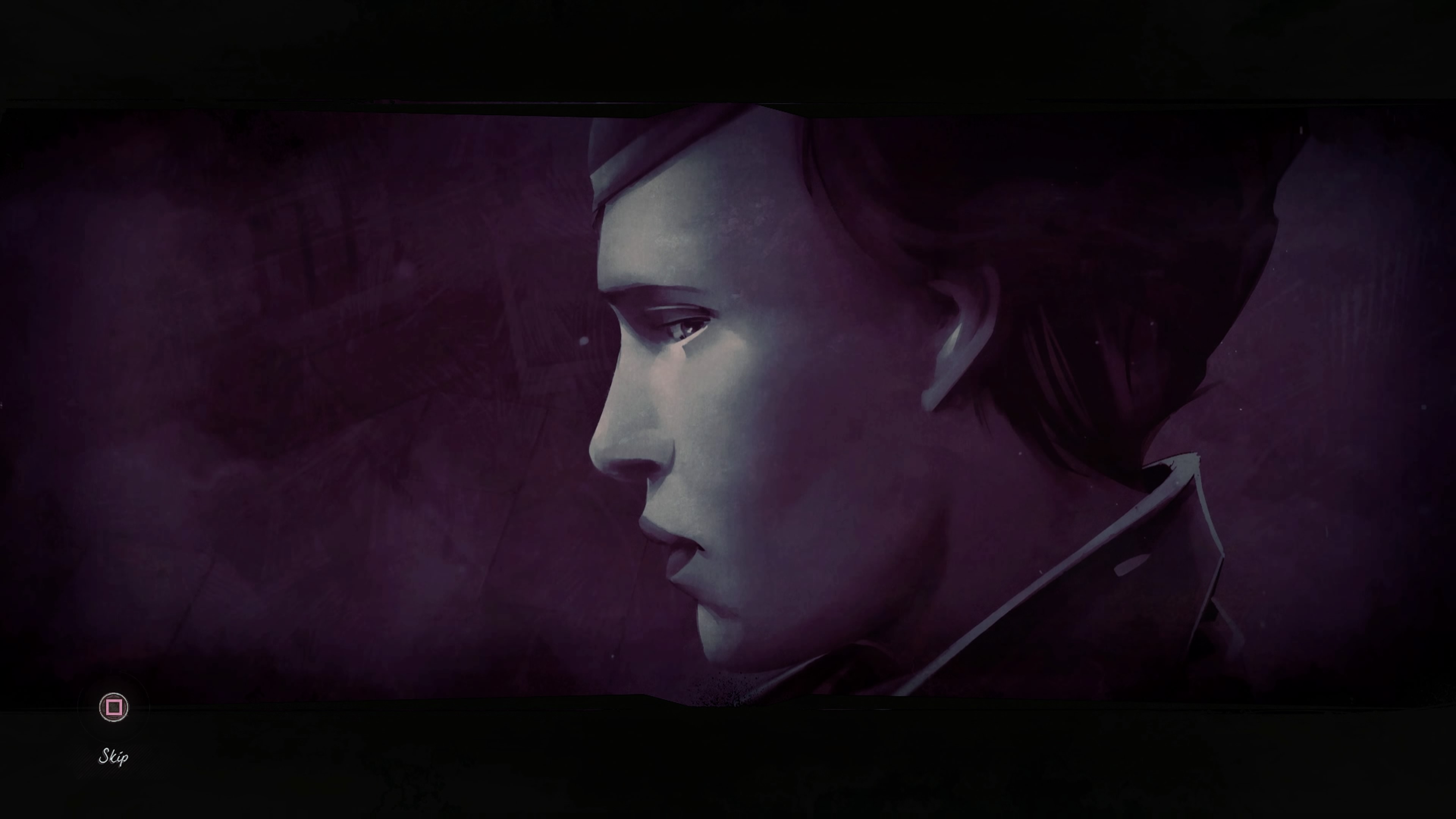 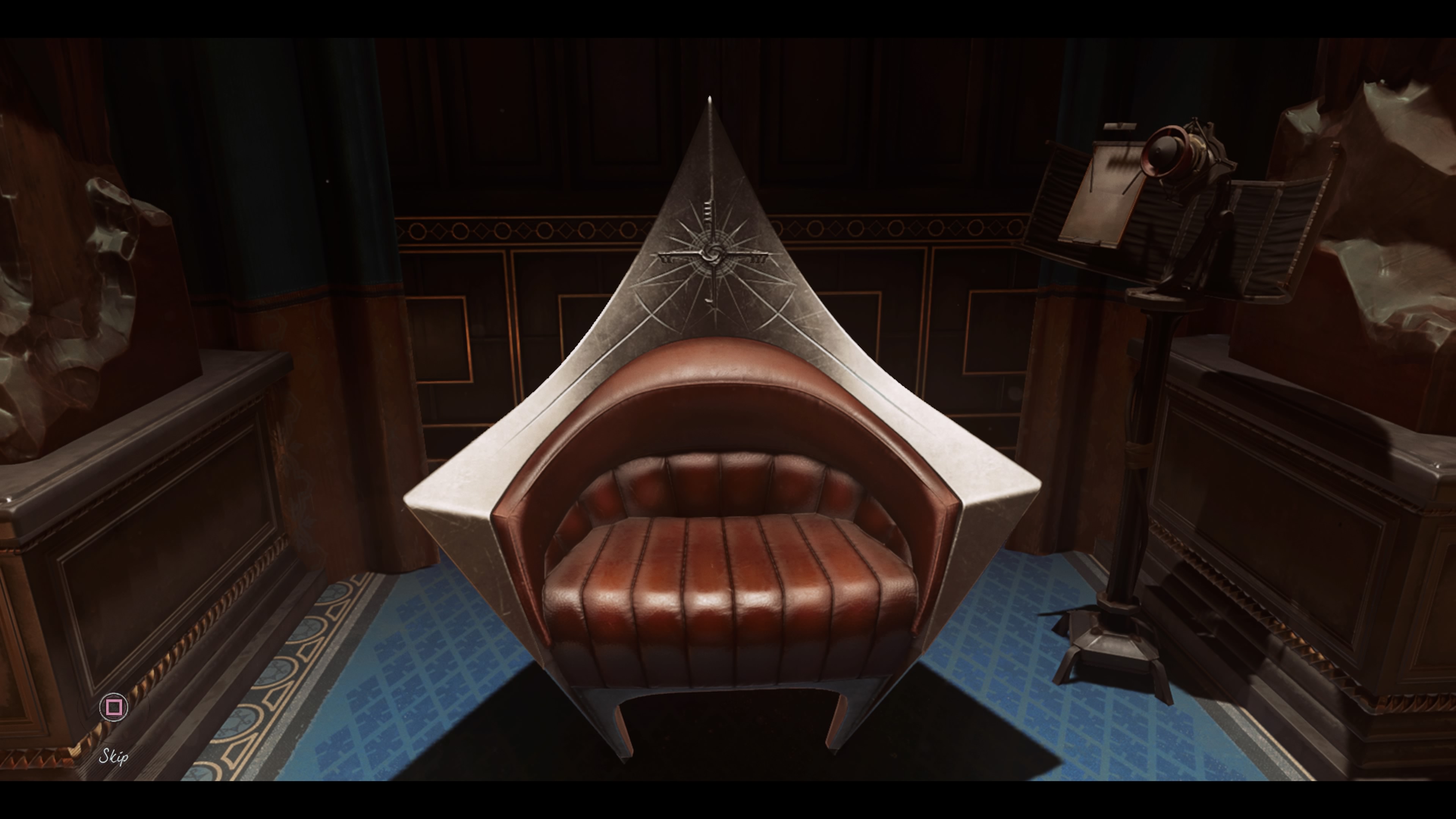 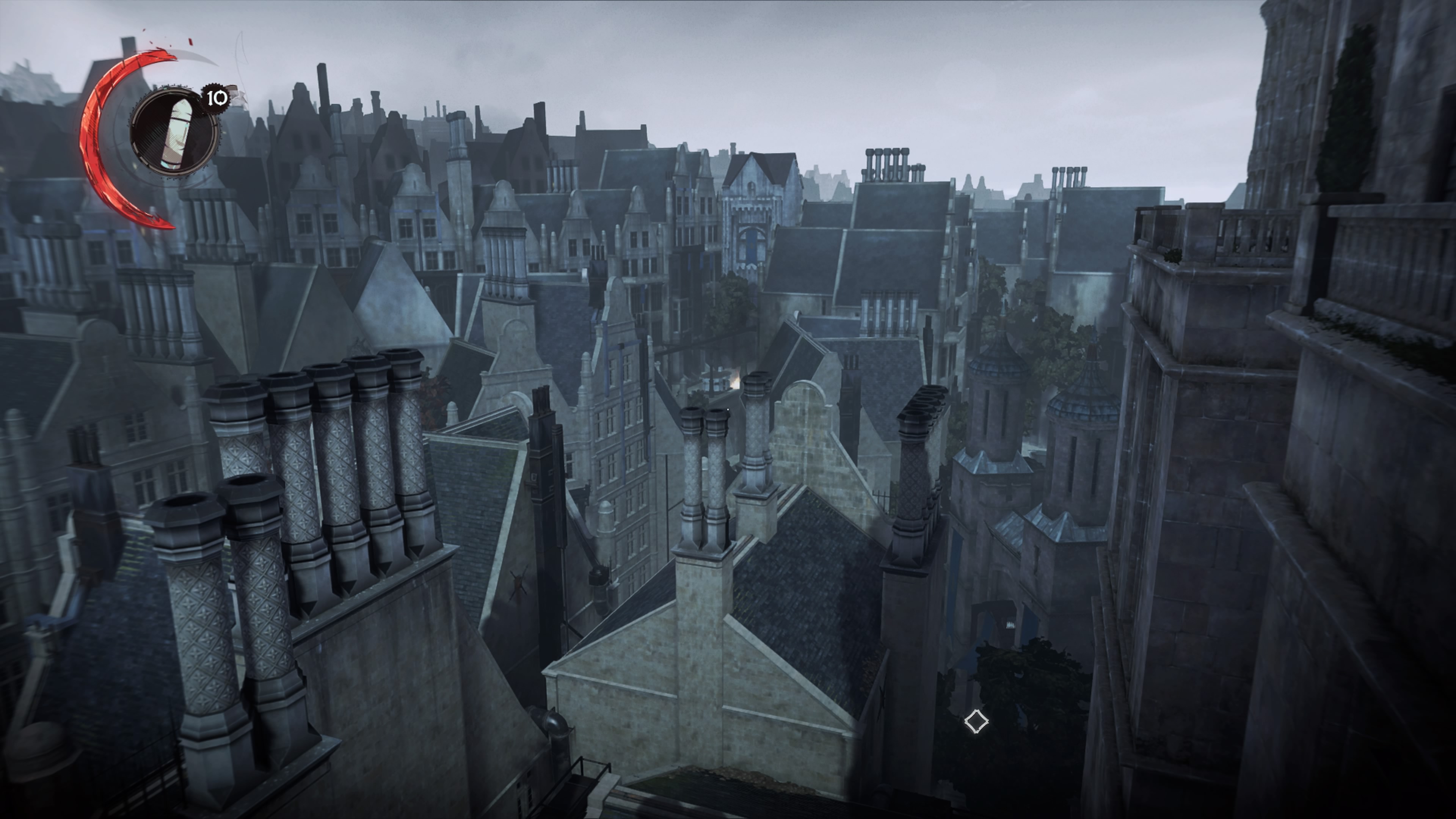 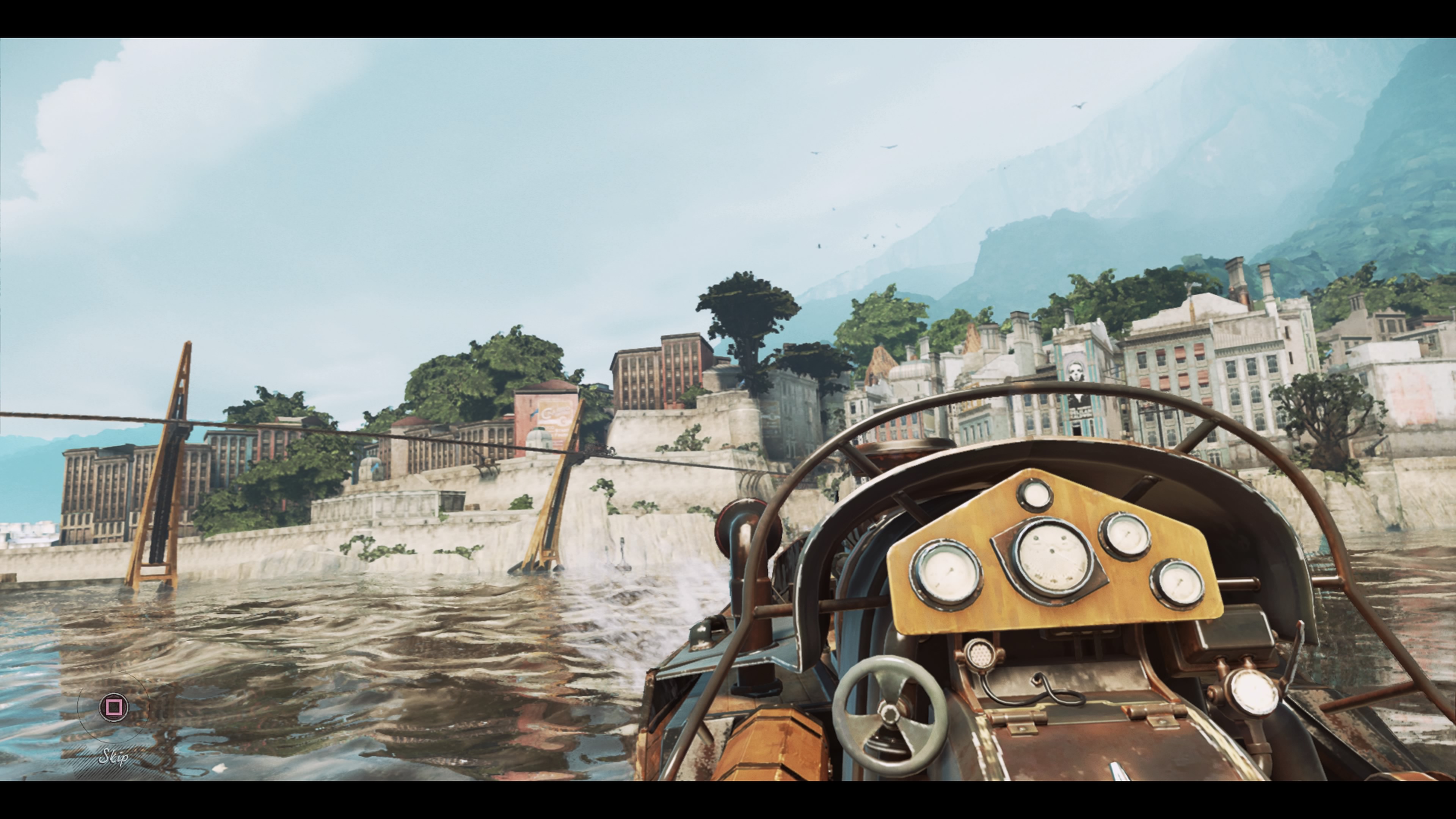 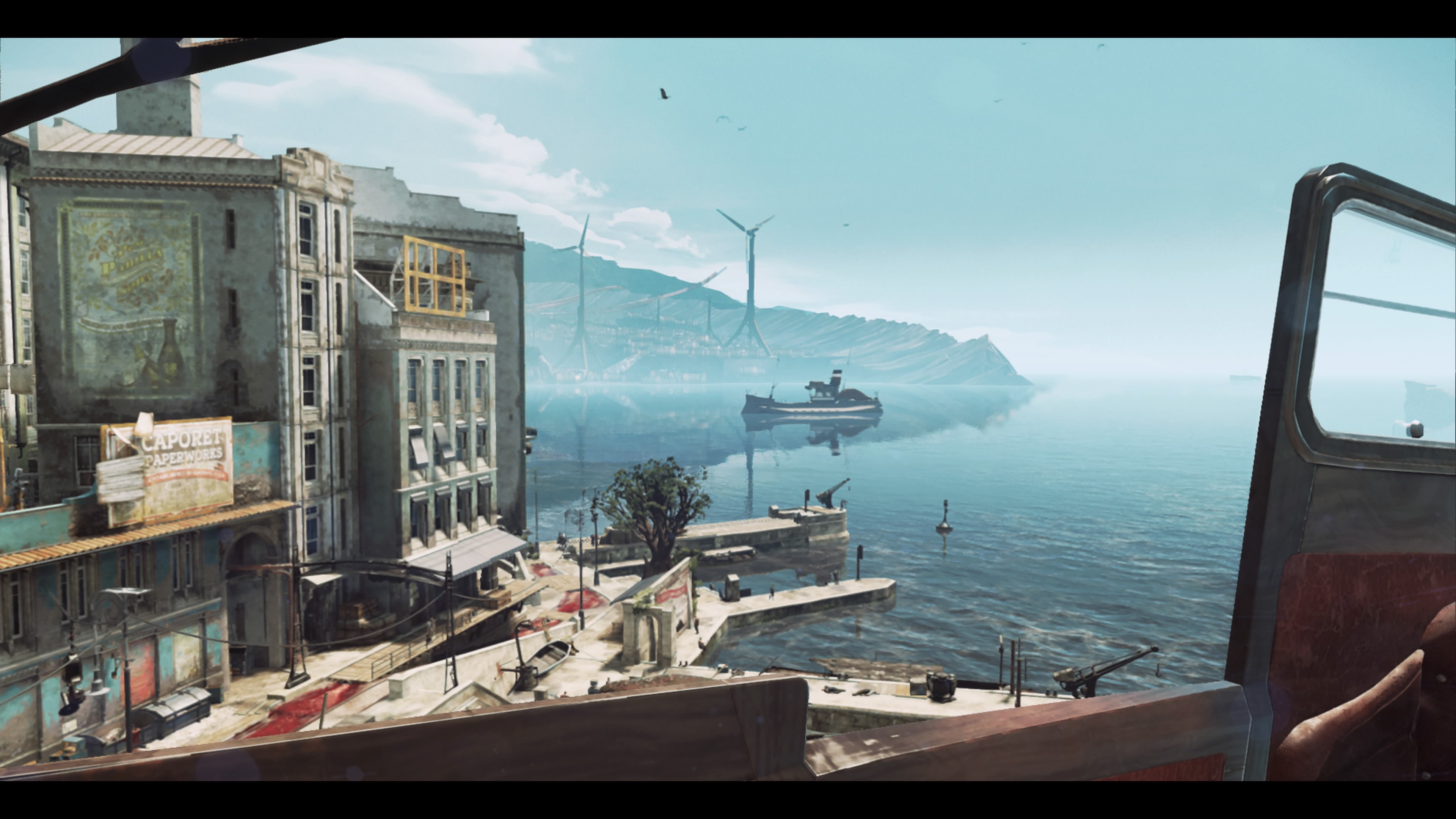 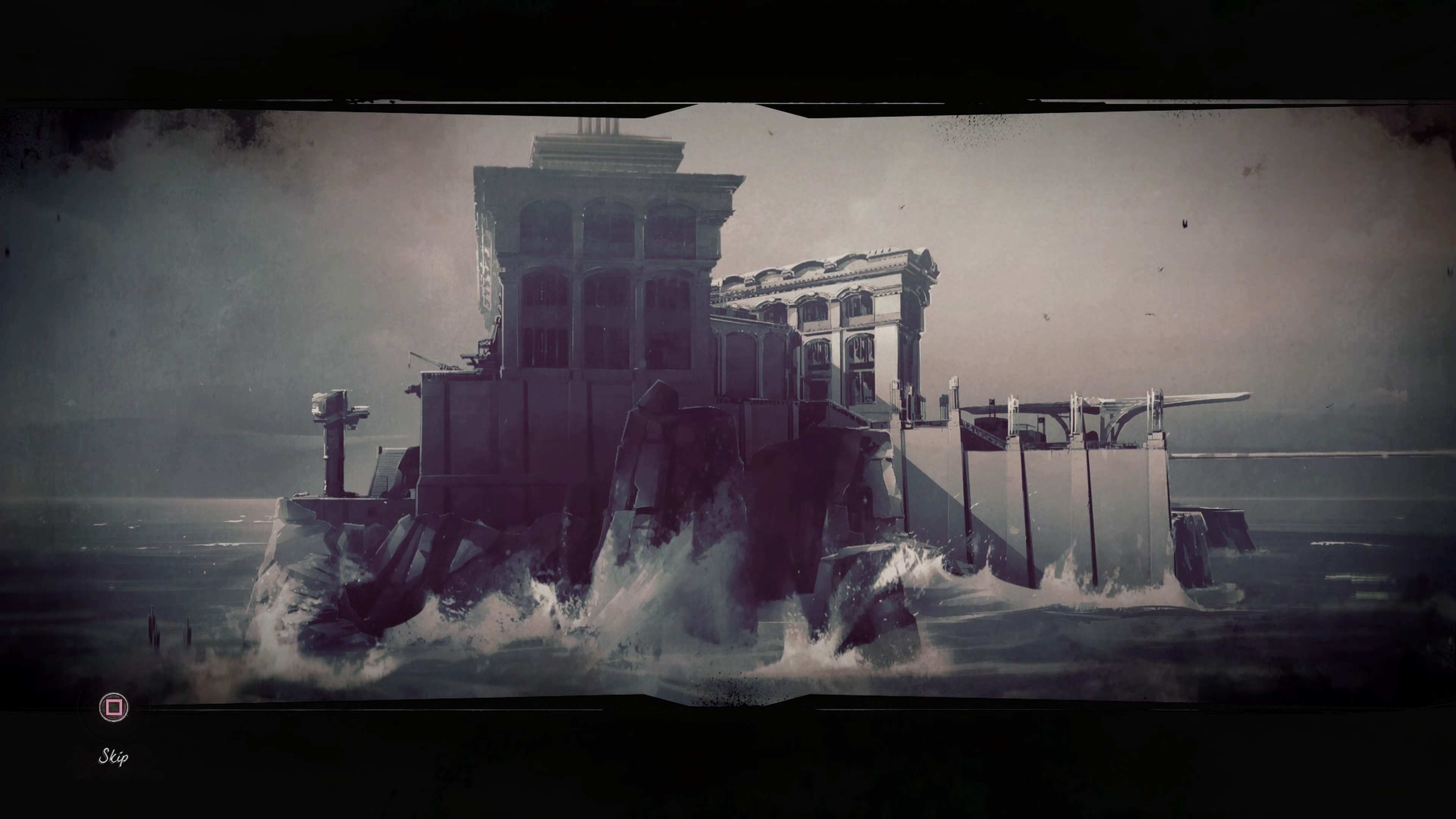 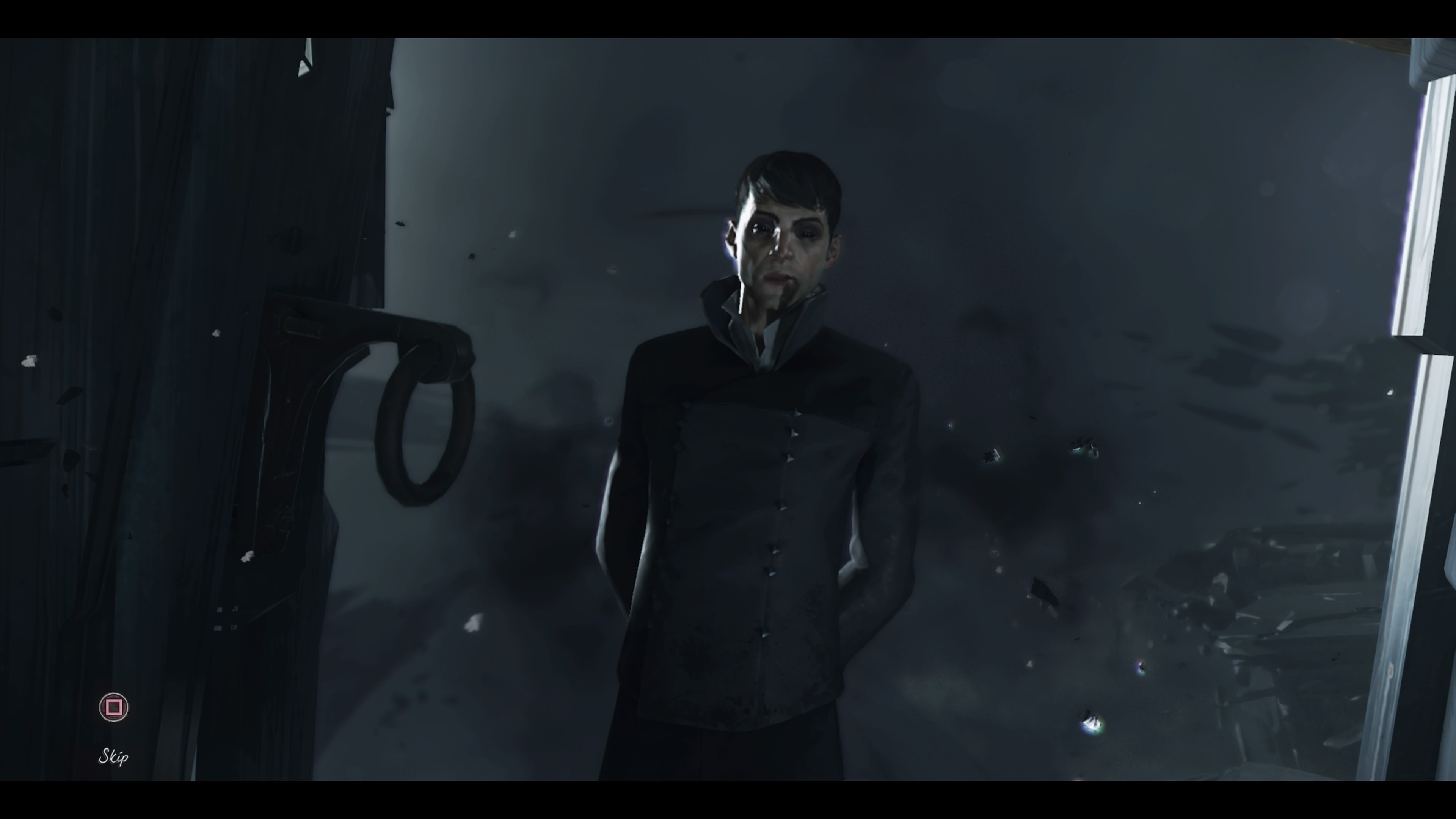 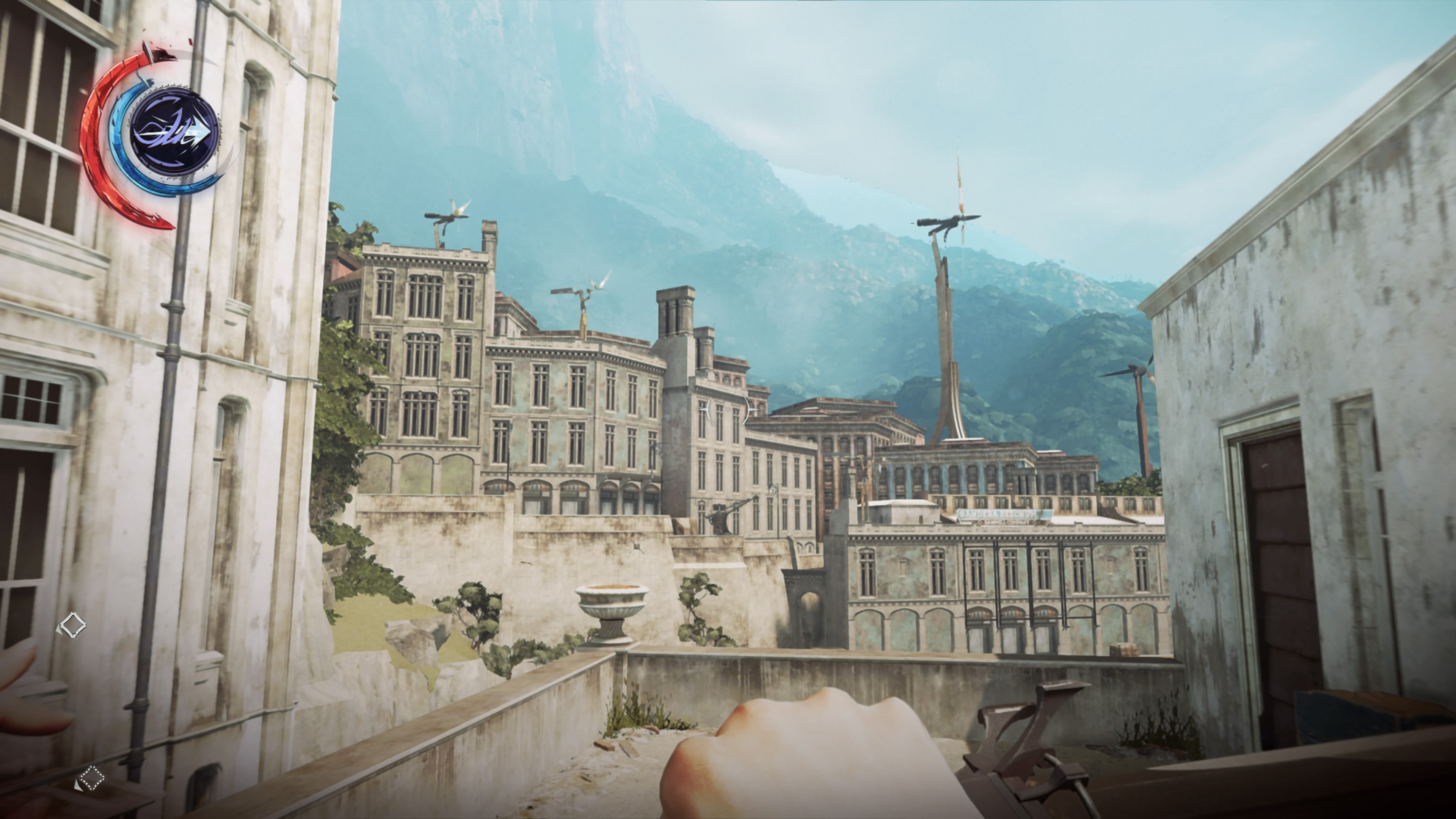 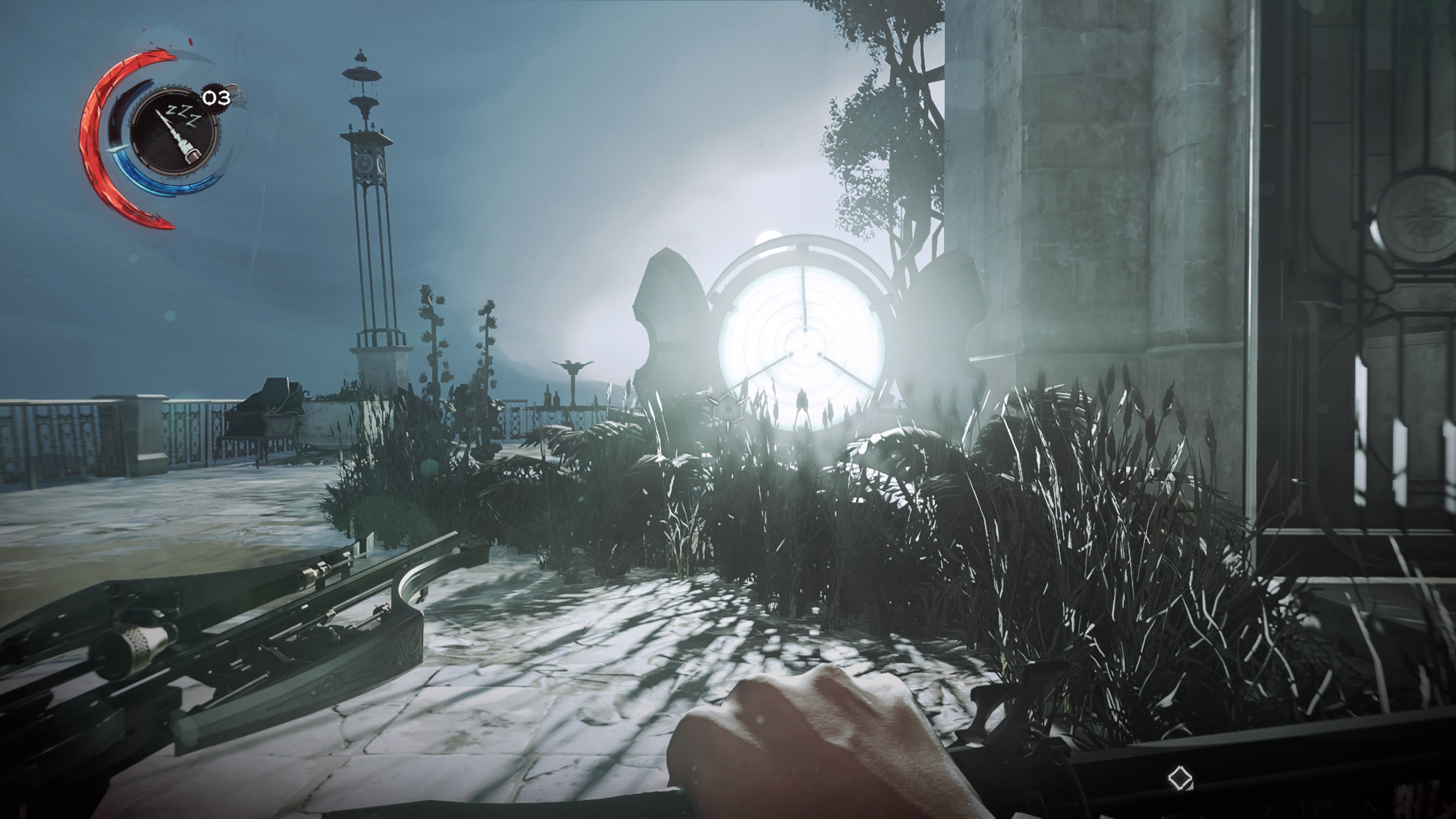 Luke: The entire universe is just so well crafted from start to finish. Chaos level, for example, doesn’t just impact the endings; it will affect the comments that civilians make as you walk past them and the city will be filled with more rats and blood-fly infestations if you’ve chosen a more violent path. Each mission holds a different style in and of itself, too. The Clockwork Mansion will have you battling robotic soldiers while pulling levers that modify each room in different ways, while another mission has you using a tool to actually hop back and forth between timelines.  It never feels like you’re retreading familiar territory despite an art-style with a very clear identity, which goes to show how clever the team have been in delicately placing each dark and twisted element.

Luke: For me, I have to mention that on my PS4 the game crashed out a couple of times. I also found some of the auto-saves pretty questionable; one in particular, I’d assassinated my target and unfortunately fell to my death when trying to leave the area, which caused me to go back to about 10 minutes before I’d first spotted my target to begin with. The story for me also didn’t feel like it had the same high stakes as the first Dishonored; perhaps familiarity breeds contempt after all.

Jakob: The auto save locations were a pretty big negative for me as well. The worst one that I experienced was in the Clockwork Mansion, which was hard enough in itself to clear (especially on a low Chaos rating). I had just activated a level that revealed an interior balcony that was also in clear view of some armed soldiers as well a clockwork soldier. I spend a couple of auto loads trying to sneak backwards with very minimal success before also having to load a previous hard save.

The other things that gave me the irrates were the inability to stealth assassinate any enemy leaning over a railing and having to pick up coins individually from cash registers.

Luke: Arkane Studios have definitely made another deep, varied and engaging experience that is as complex and interesting as you want it to be. Dishonored 2 is the kind of game that you’ll want to complete again and again just to see what you might have missed previously, and its style lends itself well to multiple playthroughs.

Jakob: I agree on all of those points, and I’m already well underway on a second playthrough for exactly those reasons. They have mastered the balancing act of choice and consequence in this game to result in a flexibility of play that surpasses so many other titles. I invite you to experience a world where the lore and potential chaos are palpable, and make your time in it all the more immersive.