Mario Party has come a long way since its origins, to the point where old school fans may barely recognise the franchise in its current form. In Mario Party: Star Rush, the second in the series for the 3DS, Mario and his friends have done away with the boardgame structure almost entirely; and with it, my interest in the series.

OK maybe that is unfair. I don’t actually hate this title, but I did at first. And while some elements introduced to Star Rush are a welcome addition, it is still not enough to help this title crack even the top 5 Mario Party titles to date.

“…it does tend to mean that WHEN minigames and boss battles are engaged, is purely on their terms.”

Don’t get me wrong, I know that Mario Party is really about the minigames, but my classic love of board games as well as the purist in me is offended by this current form. Where Island Tour, the previous 3DS Mario Party, returned to classic individual player movements, in Star Rush we see a strange new development, in which each player, either human or CPU, roll their dice and set their moves before all moving at once. While in theory this can make for strategic and subliminal game play, in practice, especially against CPU characters, what we instead receive is a messy hodgepodge of characters seemingly capable of predicting both your rolls and movements.

Anti-Toad-ites will be dismayed to hear that in the primary game mode, Toad Scramble, you all get to be Toad. In fact you have no choice in the matter. Instead, beginning in the second round other classic Mario characters begin to pop up, and can be recruited to your ‘team’, and it is at this point that the balancing begins to tilt.

Mario multiplayer games have always been famous for their ‘family friendly’, forced balanced game play, most notably the rubber banding in MarioKart. So it was strange to see a game where once an AI player deftly grabbed up one or two of these supporting characters early, each providing both extra dice rolls and special abilities, it was rare to have them toppled. While this largely doesn’t affect the minigames, the source of stars, collecting which wins you the game; it does tend to mean that WHEN minigames and boss battles are engaged, is purely on their terms. 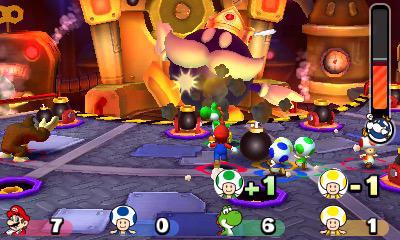 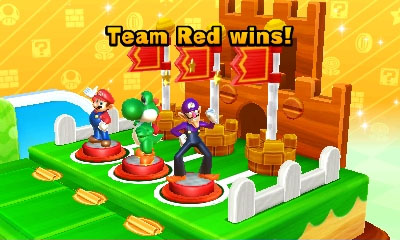 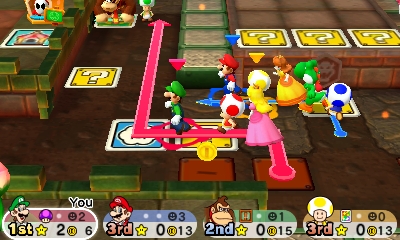 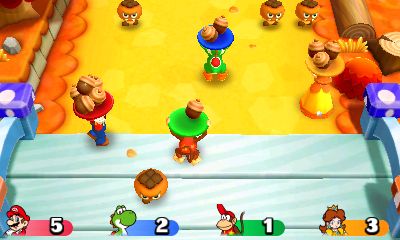 Which brings me to the boss battles. This is something that has bothered me since Mario Party 8 on the Wii.

Mario Party Star Rush doesn’t have the range of mini games of its predecessors. I’m OK with this, especially when the 50-odd minigames provided are dynamic and fun. But for the life of me I cannot understand why, when given such a range, we have to sit through 4 standard boss battles on high repeat. Some of them aren’t even new to this version of Mario Party, and soon became tedious.

In fact it was between these standard battles every few rounds, as well as the pageantry at the beginning and end of each game setup that soon had me begrudging Star Rush. While I could skip over the selection of game mode options that unlock through gameplay, sticking instead with just the Minigame mode, that seems to me to defeat the purpose of the overall game structure.

While gameplay is largely improved when playing multiplayer, being local wireless only, it’s rare for me to sit in a room with a group of people, all staring at their own screens while playing the same game. I get this is the very definition of a LAN party, however, and fully acknowledge it will appeal to some.

Mario Party Star Rush isn’t a waste of time, but does feel like a waste of potential. With players unhappy with the wait times between turns in portable versions I can appreciate their attempts to correct this, but I’m not sure the current solution is the answer. We may well find that with the announcement of the Nintendo Switch, future portable versions of Mario Party will be limited, if released at all.