As a gamer, the idea of racing down snowy mountain slopes on a plank of fibreglass with less than half a second between the reality of my face being smashed into a tree or staying how it is, has never really been something that appeals to me. However, if I can do that in the comfort of my bedroom in my track-pants with my blanket wrapped around me with little to no risk of face smashing, then sign me up!

Ubisoft’s new open world winter extreme sports game Steep delivers on this perfectly. Set in the Alps, the mountainous open world feels massive and daunting, and truly feels like you can explore them forever.

There is no time wasted in Steep. As soon as the game starts, you’re thrown onto the slopes ready to carve your way through the snow, with all your tools there at your disposal. A quick click of the R1 button brings up the sports wheel allowing you to switch your method of extremeness, from either skiing, snowboarding, paragliding or my personal favourite wing-suiting!

The two ground sports are roughly the same; skiing allows for some sharper finesse and a bit more speed, whilst snowboarding is a smoother ride and I found it much easier to nail stunts with. Paragliding is seemingly the slowest of the sports but because you’re up in the air you’re actually covering quite a lot of distance, it felt a little clunky to me though. Wing-suiting was much more suited (pun not intended) to my style of play, soaring down the mountain and taking risks by flying past jagged rocks or between power lines was extremely satisfying.

Steep has no set linear progression, so anything you find on the mountain you can do, be it checkpoint races, timed races, freestyle or snow parks. There are some parts of the mountain and some events that will only be opened as your level goes up though.

If you’re really into perfecting your run and making sure you get gold in everything it’s made really easy, as restarting any mission at all is as simple as holding down a button. If you want to give a mission on the other side of the map another go, you can open up your mountain view and just teleport there and jump right into it, which is slick and helpful.

The biggest surprise of Steep for me were the Mountain Story missions, where you find yourself completing task while being guided, spoken to, or sometimes even taunted by the spirits of some of the mountains peaks. Quite an odd addition to what I though was going to be ‘just a snowboarding game’, but are a refreshingly different way to utilise your sports and brings a different tonal shift to the game. These mountain stories would have you completing all kinds of tasks, by either following ghostly riders to the bottom of a peak, jumping through or over massive rock formations or following a long line of flowers leading to a big statue. 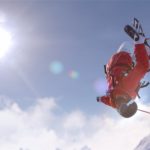 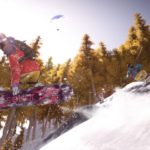 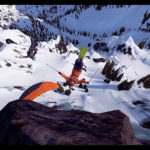 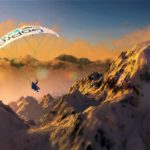 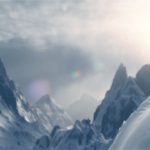 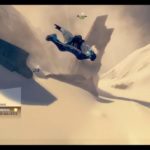 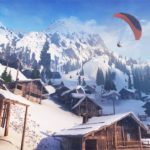 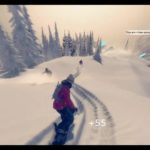 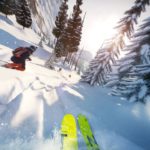 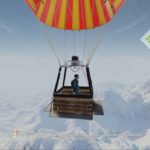 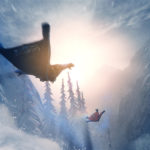 Although the game is beautiful and really sucks you into the action with the use of either first person, third person or go pro footage views. every now and then there is that frustrating moment of getting stuck on a rock and not being able to move off of it, or getting stuck inside half the mountain every time you re-spawn, which kind of draws you back out. Oh and there those pesky micro-transactions that Ubisoft just have to sneak in to every game, it seems…

“…soaring down the mountain and taking risks by flying past jagged rocks or between power lines was extremely satisfying.”

Steep really succeeds in bringing a breath of fresh air to the extreme sports space and is easily the best in the genre since Skate 3. I can see it becoming a mainstay in my collection, a perfect game to pick up and play for an hour or so to kill some time – hopefully you will as well.