If you love your classic real time strategy (RTS) games as well as being a sci-fi geek you are in for a treat with 8-Bit Invaders.

8-Bit Invaders (available now on Steam) is the third game in Petroglyph’s real-time strategy game series, with 8-Bit Armies having a more ‘traditional’ army approach, and 8-Bit Hordes a fantasy theme. 8-Bit Invaders, as the main suggests, involves an alien invasion with all overall sci-fi/mech theme.

The ongoing appeal for this game is that factions from any of the 8-Bit games can do battle in multiplayer battles.

I played the game for this review using the campaign mode (ie. extended tutorial mode), that gives you a choice of taking control of the Marines or Cranioids, with each completed campaign granting additional units and buildings.

I chose the Cranioids, an alien horde invasion with units inspired by alien-themed classics such as the Alien franchise, Mars Attacks, Starship Troopers, and I am sure countless others.  Upon starting the game, I was looking forward to building my army of xenomorphs, I mean xenodogs, to conquer the galaxy.

And thankfully I wasn’t disappointed.

The gameplay is quite simple and intuitive for anyone who has played a RTS game before.  You select unit(s) with a left click of the mouse and assign them to attack a target with a right click.  You need to build structures to allow additional abilities or units to be created, with these units predominately used for fighting as well as to collect resources that provide the currency in the game.

And of course, all commands have keyboard shortcuts to enable intense battles. 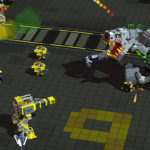 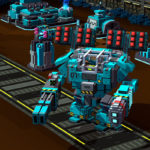 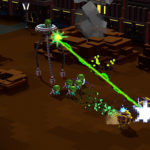 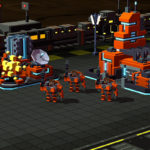 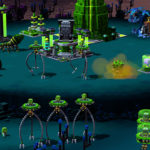 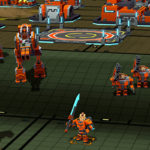 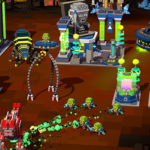 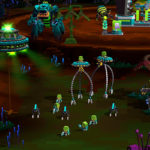 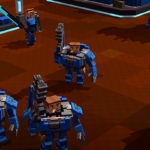 The gameplay starts off on a very easy level that allows you to explore the maps and enjoy the blocky landscapes and cute movement of the units.

Although the difficulty certainly increases throughout the campaigns, this game is designed to be played against other human/alien competitors.   Thankfully although the gameplay is simple, several strategies can still be applied (eg. swarm with infantry-type units, build fastest towards the higher end units, and monopolising the resources).

Only relatively new to the 8-Bit games series, I was drawn to this game purely on its sci-fi alien invasion theme.  The graphics have a delightfully retro feel and thankfully the music soundtrack has a great rock sound (from composer Frank Klepacki).

When choosing to play 8-Bit Invaders, the choice is crystal clear

As with many RTS games, the voiceovers can unfortunately become repetitive and annoying, and I must admit I left quite a few Harvesters to die with the incessant “Harvester under attack!” warning.

8-Bit Invaders promises value for money with a multitude of single player missions to keep your occupied, as well as two-player cooperative missions, AI skirmish maps and multiplayer battles allowing up to 8 players to battle simultaneously.

I loved this game because of its simplicity reminiscent of some “good ‘ol RTS games”, novel and quirky graphics, and the alien invasion theme that will have you calling out commands “Mars Attacks” style and movie quotes like “Get away from her you bit–“, and just embracing the sci-fi references.