The year is 1988, and its almost the holidays in the neon jungle of Kamurocho. As you walk further down the busy street, you stop to see an angry looking man breaking the jaw of another angry looking man by slamming his head into a vending machine.

Welcome to the world of Yakuza 0, the latest installment and prequel to the open world brawlers that date back to the PlayStation 2. This entry takes the series way back to before the events of the first game and to the early days of series protagonists Kazuma Kiryu and Goro Majima, telling two stories that intertwine in a plot based around deception and betrayal.

Kiryu’s story revolves around him being set up for the murder of a civilian, and a conspiracy surrounding Kamurocho’s notorious “Empty Lot” in which the murder took place. Majima is attempting to earn his way back into the Yakuza by working as manager of The Grand Cabaret, the most popular hostess club in all of Sotenbori.

While the story in Yakuza 0 is gripping and engaging, there are a plethora of weird and downright ridiculous side-quests that give Yakuza 0 the same charm as it’s predecessors. Sure, you could just breeze through the main story and ignore everything else, but you would be missing out on so many fun and interesting distractions.

The game gives you plenty of side-quests that roughly take up to 5 minutes to complete, and are a welcome break  from beating up tonnes of dudes. Of course, Yakuza 0 (and the series as a whole) excels in the field of beating up tonnes of dudes. Fights can happen anywhere and at any time, with the different environments allowing you to experiment with different approaches to combat.

“Kiryu and Majima each have different flavours of fighting styles which offer new and interesting ways to kick someones teeth out, and you can upgrade these styles too.”

The combat system makes for some rather brutal and eye-watering moments. There are your standard light, heavy and grab attacks which connect with bone-crunching intensity, but you can also build up your heat meter, which is when the fun really begins.

Your heat attacks trigger under certain conditions and some aren’t easy to pull off, but when you do manage to activate them, it’s super rewarding; for example, when I suplexed a guy through some metal railing, and then slammed his friends head into a car door multiple times. These are just a few of the ways the combat in Yakuza blows any other fighting game out of the water.

Kiryu and Majima each have different flavours of fighting styles which offer new and interesting ways to kick someones teeth out, and you can upgrade these styles too. You do this by buying upgrades from the menu, and going to the master of that fighting style to learn even better moves and abilities. 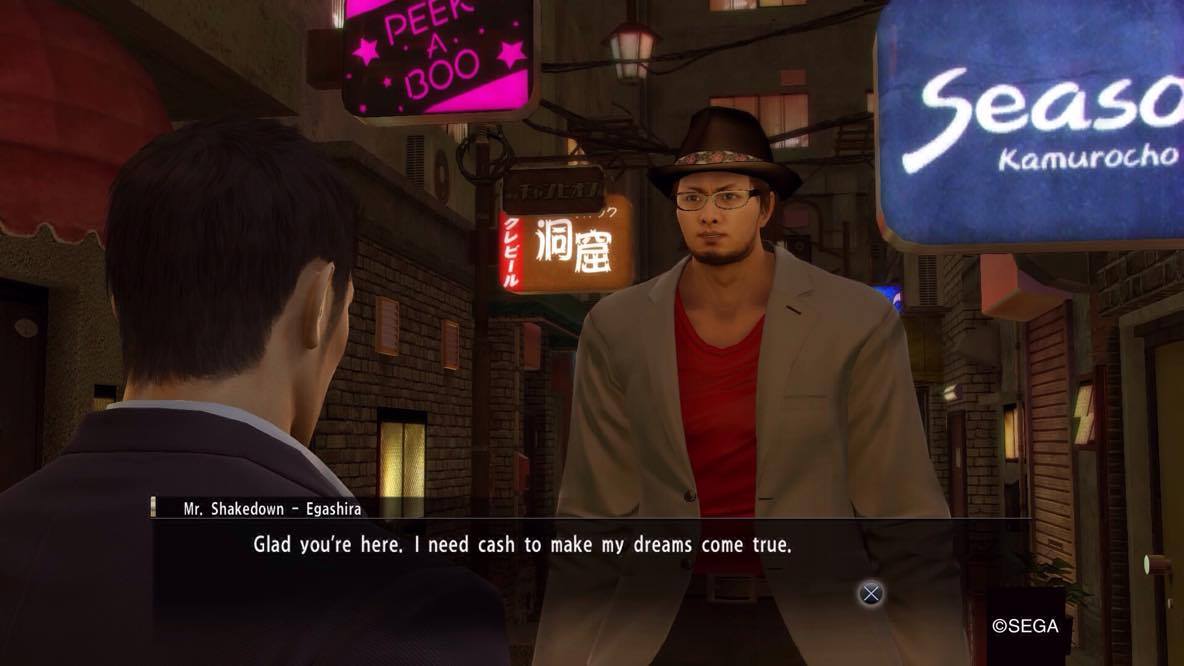 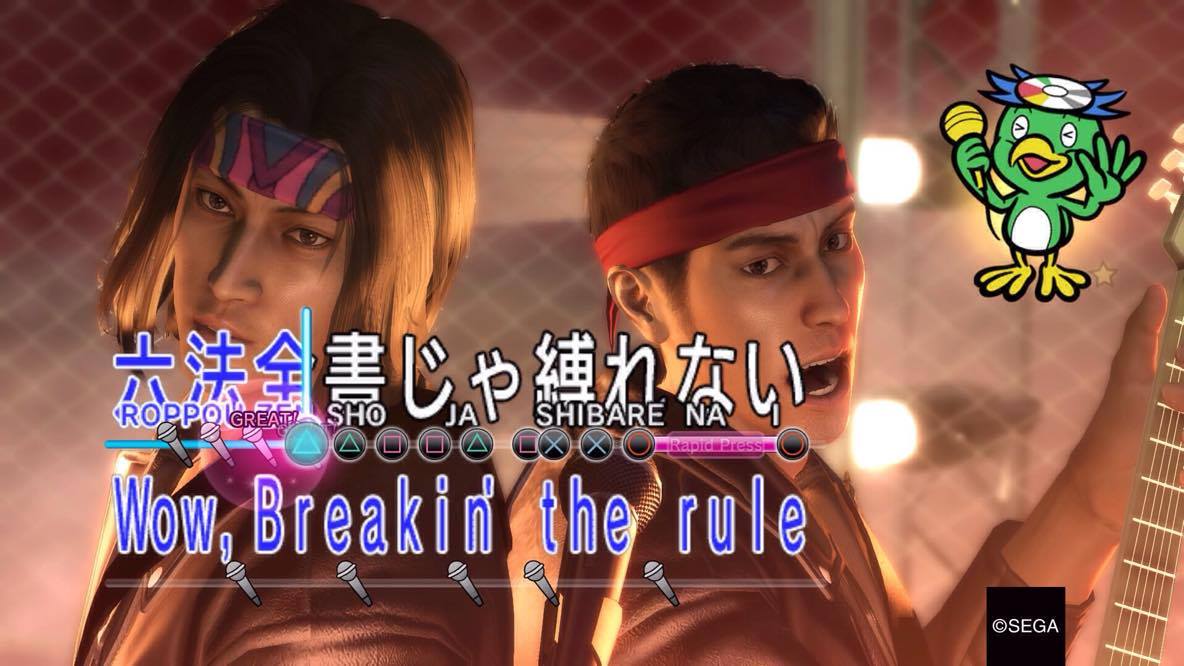 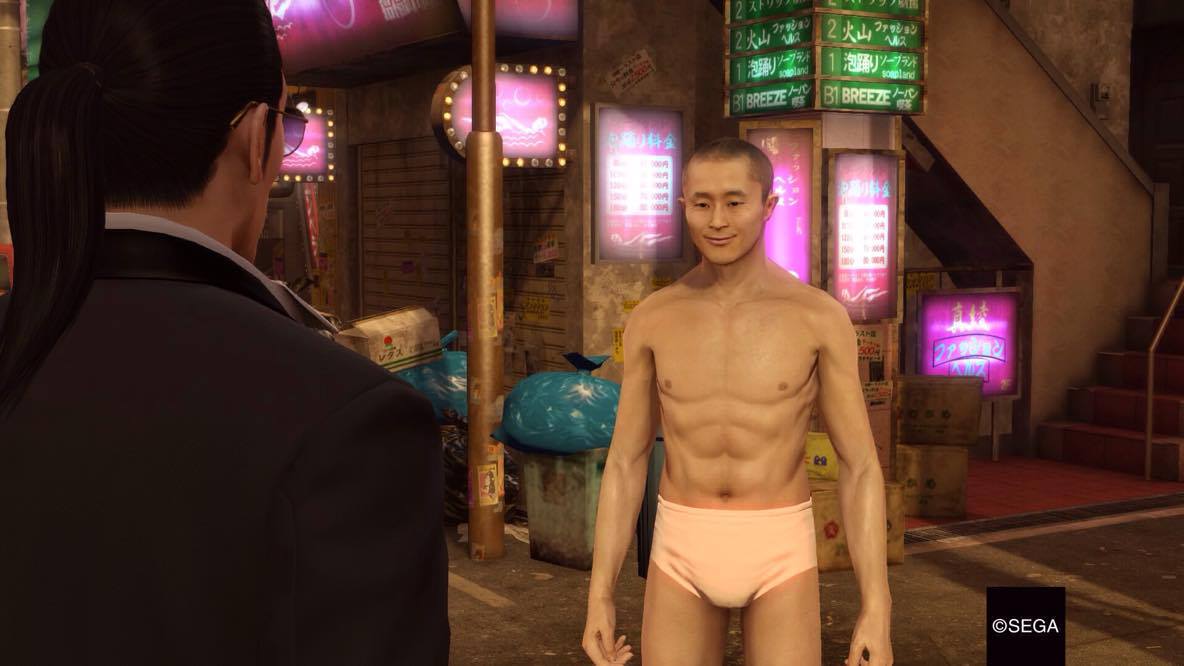 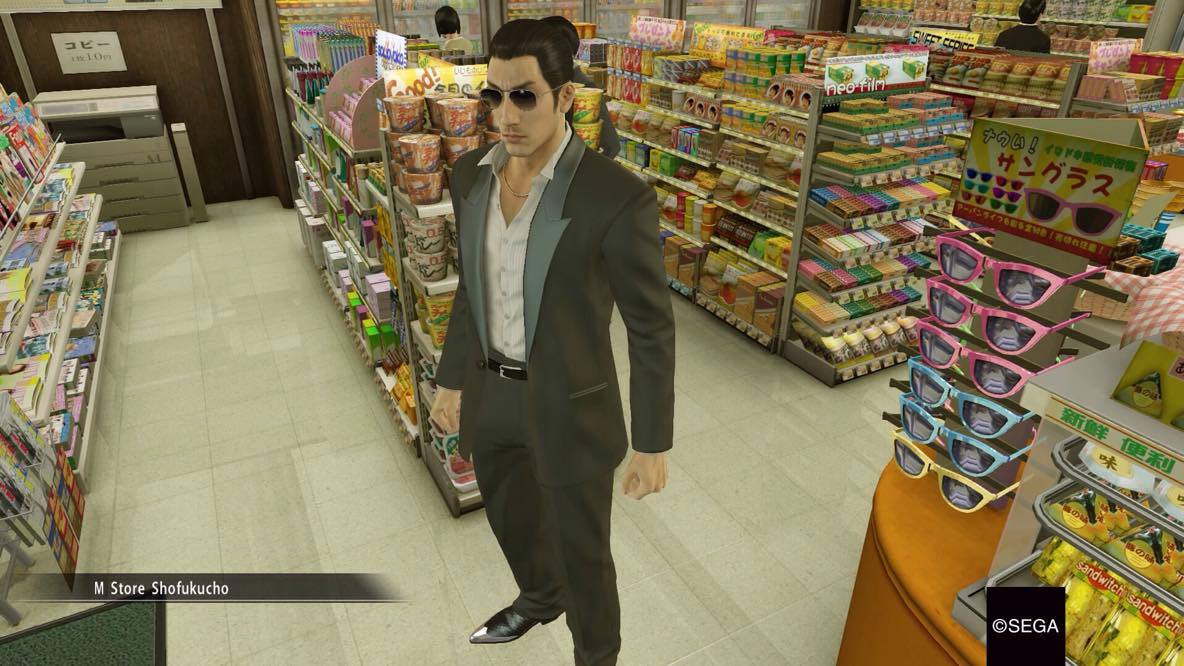 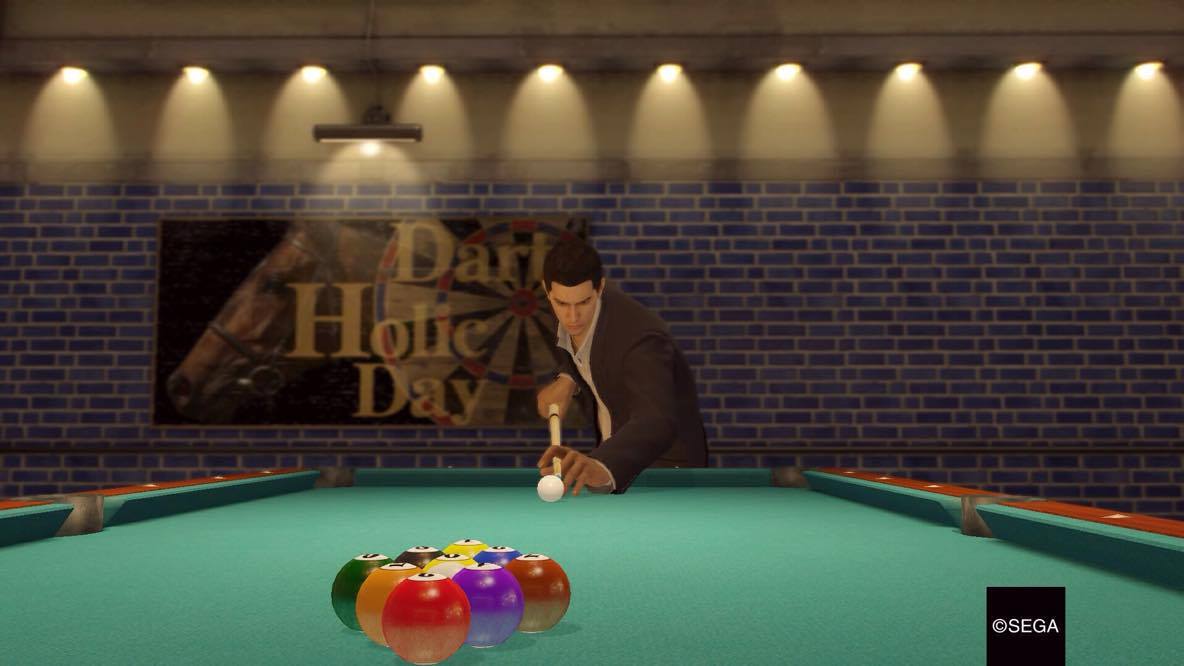 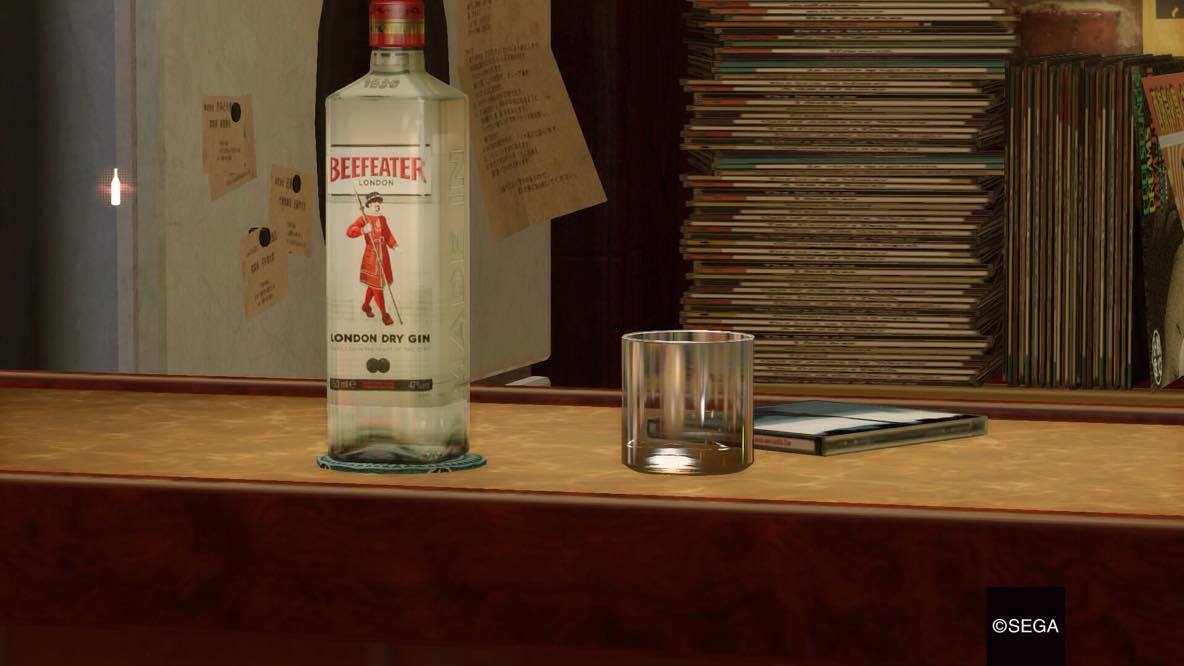 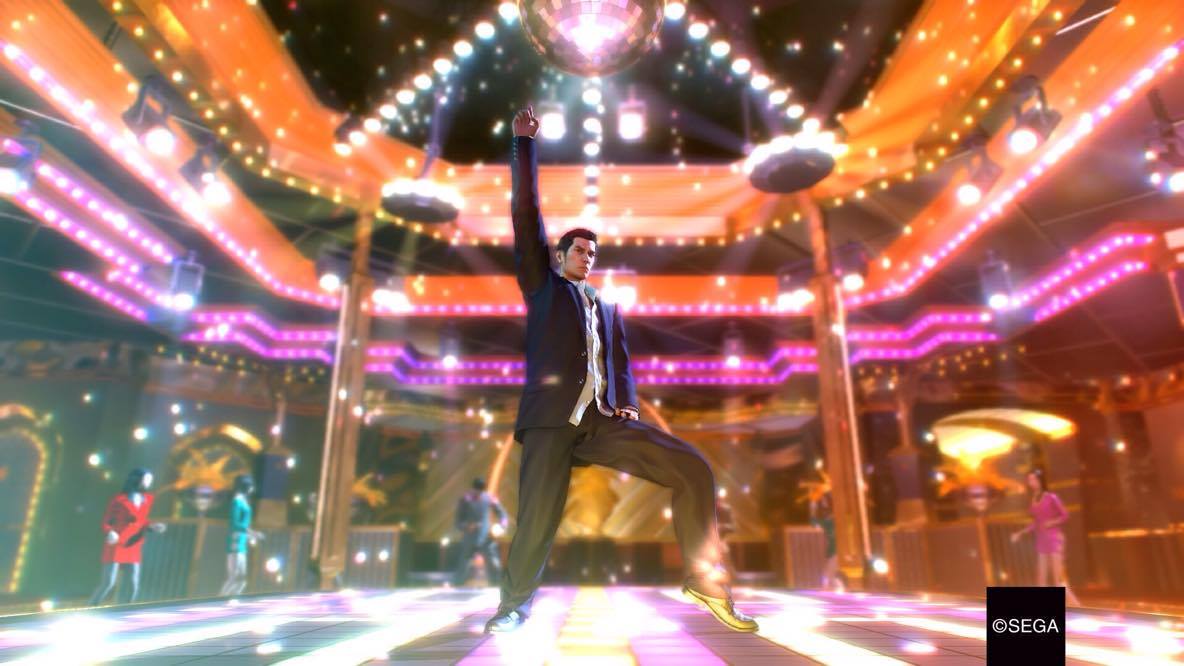 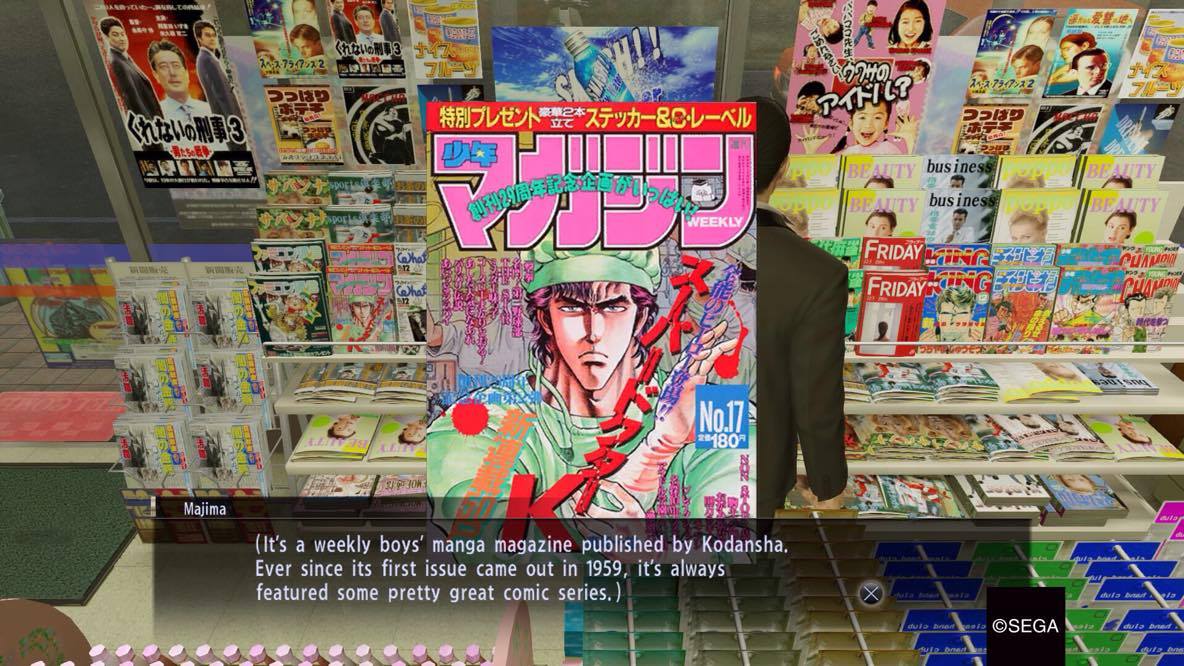 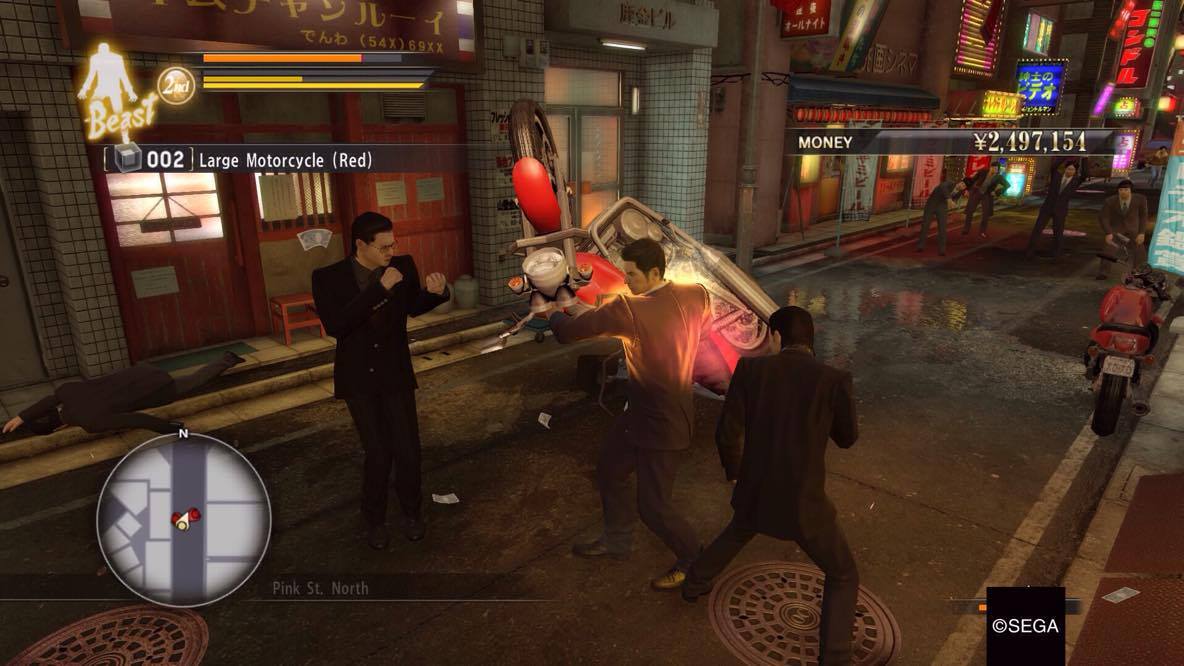 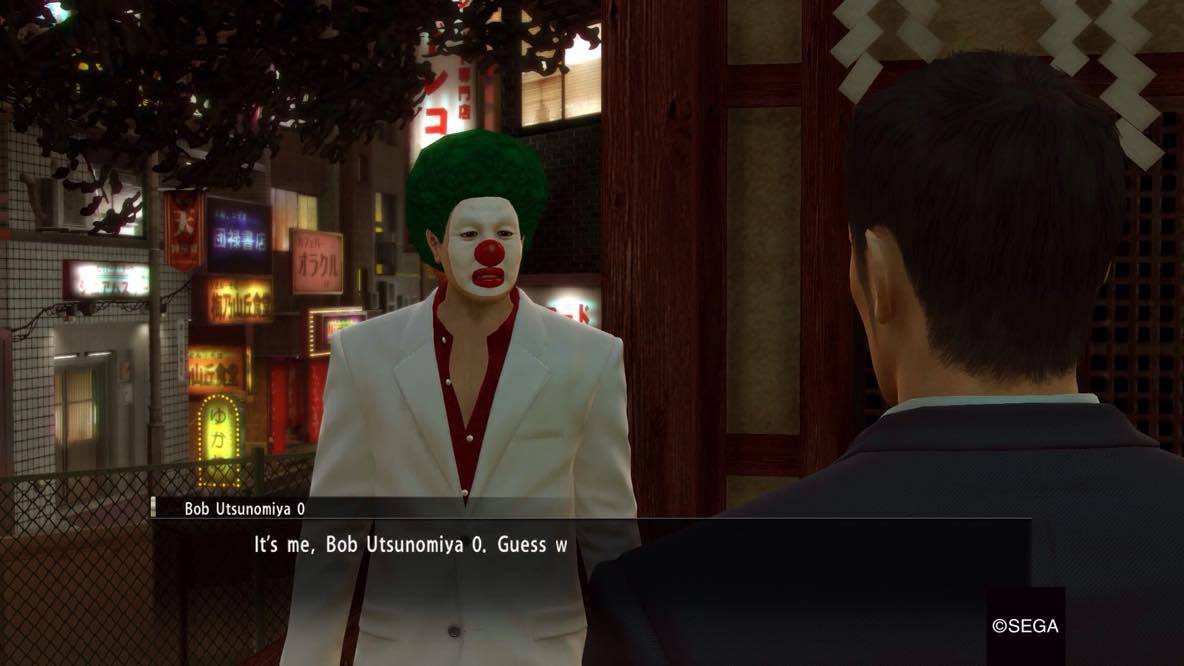 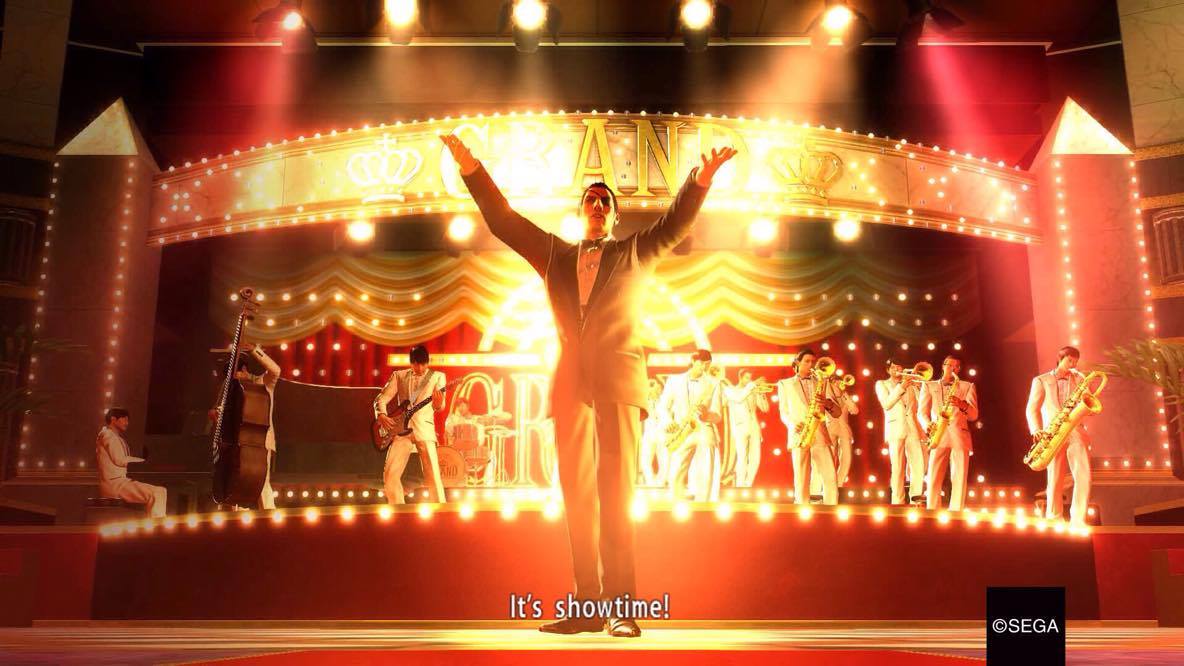 Making money is as simple as slamming a goons head into the wall like a blood-filled pinata. You get a chunk of money after every fight, but the amount you get can be substantially increased by meeting certain conditions.

Finishing a fight without taking damage or knocking out multiple people at once can greatly increase the earnings you receive. This gives you a reason to use more variety in your combat and experiment with every fight, instead of just always picking up the nearest pole and busting heads in.

There are plenty of things to do in Yakuza 0 than just beating people half to death with a well placed curb-stomp.

Activities are strewn throughout the game world, and you can partake in them as often as you’d like. Bust a move at the local disco, sing your heart out at a karaoke bar, win some money playing pool and then have it immediately stolen by Mr. Shakedown because he is an overpowered asshole.

Oh, did I mention there are fully working of versions of  Sega classics OutRun and Space Harrier which can be enjoyed in the game’s Sega arcades, alongside an annoyingly engrossing UFO Catcher machine, which I honestly spent a solid 30 minutes and several thousand yen on.

The audio and visual side of things are great. The soundtrack is exactly what I expected it to be, perfectly capturing the mood of each plot driven scene and the neon lit streets. And though the visuals are appealing, they’re not mind-blowing, which is forgivable as this game was released simultaneously on the PS3 in Japan.

Yakuza 0 is a great entry into the series, but I do have a few nitpicks. The combat occasionally feels a tad repetitive, with some of the heat actions being very samey, but this can be counteracted by the enjoyment of picking up the nearest bin and wrapping it around some drunkards nose.

Then there’s Mr. Shakedown, a big burly bastard that can knock you out in one hit, who roams the streets of Kamurocho and Sotenbori. As his name suggests, he exists purely to frustrate the hell out of you and  take all your hard earned money. Every time he beats you into submission, you lose ALL of your current funds, leaving you with a red hot zero Yen and just as much pride. Whilst you can avoid him completely, and beating him gives you all the money he ever took from you back, combat against Mr Shakedown is super infuriating as he can insta-kill you with one hit.

The story can also get a bit convoluted at times, but with every two chapters changing characters, it keeps up a steady pace for it to not really become a major issue.

Yakuza 0 is a solid reminder as to what made the series so popular all those years ago. With a strong fighting mechanic and engaging characters, you will find yourself absorbed in this 80 hour roller coaster. With a western release of Yakuza 6 potentially coming sometime this year, there is no better time to get into the Yakuza franchise.