Nioh is the latest game in the “so tough yet so rewarding” genre of action RPGs to be released. The genre saw a big push with releases like Dark Souls and Bloodborne, which this game is modelled closely off of when it comes to progression, style and difficulty level. However, Nioh does enough different with its interesting  storytelling and complex, faster paced combat, along with a brighter colour palette and varied environments, that it just might be my favourite challenge of this type so far.

I mention the story, which is still confusing, but at least has cut-scenes and characters moving things along, as well as a clear mission structure. In other games of this type, a lot of the story is implied rather than told, which leaves a lot of the experience feeling quite lonely and disconnected. Nioh has you meeting quirky, dark characters and helpers in the form of spiritual cats, wolves and other creatures that aide you on your journey. It’s all a little strange and hard to keep up with don’t get me wrong, but it injects much-needed personality into the proceedings.

Team Ninja are known for their quality combat in past games like Ninja Gaiden, so the development team have shown confidence here, creating a system that’s based on stamina, or “Ki”, as much as it is on the dodging and blocking tactics required to survive. Not only are you able to monitor your own, but you can also clearly see the Ki that your opponents have used, represented by a small bar above their head. If you are out of Ki, you can’t attack or block until it regenerates, so tactically speaking you can ensure that your enemies are out of juice before going in with more powerful attacks yourself.

On top of this, you can change your stance from high to medium to low during combat. Your stance represents the style of battle, so you can change to high stance for maximum damage, but that will expose you and leave you with little defence. The opposite of this is the low stance, which helps you to block and dodge with more ease but leaves you with quick jabs instead of punishing blows. Medium stance is the average of the two, but sticking with this won’t add value to your battles as you progress to more difficult stages.

You can also promptly recharge your Ki by correctly timing a button press, which also becomes crucial. All of these different combat elements come together seamlessly, even though they sound like a lot on paper. After several hours of play, I was able to change stances, recharge my Ki and chain together decent attacks against multiple foes at once, feeling pretty damn proud of myself in the process. 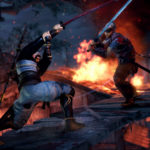 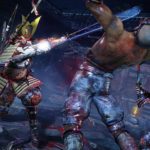 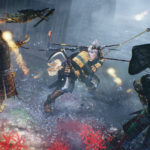 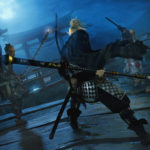 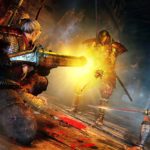 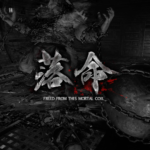 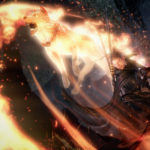 The structure of each level will be familiar for anybody who has played any of the aforementioned Souls games before; you start near a shrine, which is where you’ll need to trade in your Souls – err, sorry, Amrita – to be able to level up your character, increase your stats, break down gear etc. There are also Titles that are essentially additional side-missions that can add bonuses once complete and guardian spirits that you can find on your journey that also provide passive boosts and buffs.

The downside is, using a shrine means that all enemies will respawn, causing you to retrace your path, learning from your past mistakes and successes. Cleverly, as you access new areas, you’ll usually be able to find shortcuts back to the shrine, saving you from repeating more than about 30 minutes of gameplay over and over again. Once you’ve opened the shortcut path, it stays open even when you die, so you can pick up where you left off more easily.

“There’s a rhythm and flow that really brings together all of your skills in a harmonious, memorable way…”

Dying is a regular occurrence, and you must learn from these deaths to then be able to go back and retrieve the Amrita that you’d dropped. Enemies loom in hidden rooms and doorways, shoot arrows from unexpected places and some of them are, of course, ridiculously hard to take down. In particular, demons called Yokai can appear, which are not only more difficult to kill but create areas that stop your Ki from recharging, making certain battles even more taxing and tactical. 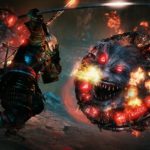 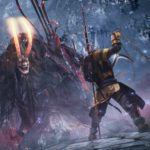 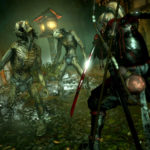 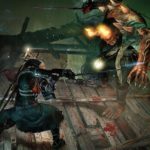 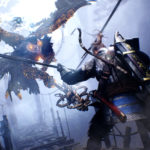 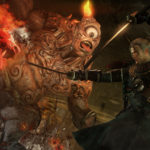 You’re able to shoot arrows or rifles and attempt to pick off enemies before they spot you, which is something that trust me, you will have to do if you want to make your adventure just that little bit easier. Even so, years of playing these frustratingly difficult games had me well prepared for my time with Nioh, but if this is an entry point into this genre, be prepared for what could easily be some of the most anger-inducing moments you’ve ever experience as a gamer. Don’t forget though, completing certain battles (especially difficult but incredibly well-designed boss fights) will also feature as some of the most rewarding memories you can have as a gamer, so it’s all incredibly well-balanced.

Enemy variety manages to always keep you on your toes along with being well realized in their designs, starting off simple with humans and basic zombie-like demons that speed up when crawling before escalating to giant lumbering creatures that can kill you in one swift combo and packs of possessed spiders. Each level has a distinct personality to it as well, from high cliff-tops to a village left in flames or a tricky ninja mansion; they’re all filled with surprises and well-placed shortcuts that made them a pleasure to explore.

Nioh also provides the ability to tackle areas with a friend via co-op at increased difficulty, along with asynchronous multiplayer that allows you to fight Revenants; spirits left behind by other players where they fell in battle. These extra challenges extend the life of the game even further beyond the main story and side missions, which will already have you occupied for dozens of hours on their own.

It’s the overall pace of Nioh that helps it shine through, with the fast combat creating a vibe and urgency that helps it to stand out above the rest. There are skills and abilities  I haven’t even touched on that you can combine and experiment with, along with multiple weapon types, so there’s plenty of ways to customize the way you play. There’s a rhythm and flow to the battles, particularly sword fights against opposing Samurai, that really brings together all of these skills in a harmonious, memorable way.

On paper, everything Nioh sets out to achieve looks like an attempt to replicate the success of the Souls franchise with its trademark difficulty, but instead, eclipses its reference material entirely by being faster, brighter and more replayable. It’s satisfying in the best way and has incredible depth in a classic “easy to learn but tough to master” combat system that will reward your success just as much as it will punish your failures. I have genuinely spent my recent days at work sitting at my desk, day-dreaming of the next epic battle that will take place when I get home to play it. It all comes together to create one of the most refined and well-executed action RPGs you can get your hands on.