Not for a long time has a game managed to draw me into the world and the lore in the same way as Horizon Zero Dawn. Guerrilla’s perfect execution, attention to detail and imagination shines through in every aspect of this stunning title; from the attention to visual detail, to the deep lore and flowing controls and combat. Horizon Zero Dawn is a defining game for 2017 which is made all the more impressive by it’s origin as a brand new IP.

Horizon Zero Dawn follows the life of Aloy, a young outcast of the Nora tribe in a fantasy stone-era world, filled with incredible robotic beasts who roam the lands along side organic animals. Immediately the title starts introducing hints about the wider narrative, clues and small revelations about the world that existed before and has now been lost to time. Following Aloy from a very young age; along with her mentor Rost, the player is guided into the world, they are taught the rules,  introduced to the combat and interactions,  and learn about the robotic creatures that inhabit the picturesque world of Horizon Zero Dawn

“You’ll quickly fall in love with Aloy and empathise with her struggles as she discovers an amazing world and fights for answers.”

Guerrilla have taken what many would consider to be an ageing formula, the RPG adventure set in bow & sword era where one hunts and explore the land, and have managed to make it feel oh-so-fresh again. Exploring ruins of an old, yet technologically advanced society, collecting logs and information about the beasts to unravel the complex story is incredibly engaging. Horizon Zero Dawn doesn’t rush you with information though; the player isn’t left saturated in the world’s history, nor overburdened with the  narrative unfolding in front of them. With the use of excellent narrative pacing, the game remains engaging whilst allowing for exploration and thorough analysis for those players who want it. With that considered; for players who are more comfortable with a superb action game and prefer to keep a way from the nitty gritty of the world, it avoids drowning the player in dialogue and walls of text, allowing them to take a lighter skim over the lore if they prefer.

Without wanting to spoil anything about the narrative because in case it wasn’t apparent, I highly recommend Horizon Zero Dawn; the game offers a quite unique approach to the sociological constructs it presents, with themes of matriarchy and motherhood running deep through every facet of the world, such stories are sadly left untouched by games for the most part. If you’re a fan of deep and original worlds with fine-tuned and perfected story, this is not a game to miss.

Whilst you’re not able to create your own character and immerse yourself into the world in the way a lot of RPG fans love, the characterisation is top tier; allowing for a blank slate character in Horizon Zero Dawn may have even done the narrative a massive disservice. You’ll quickly fall in love with Aloy and empathise with her struggles as she discovers an amazing world and fights for answers.

Horizon Zero Dawn allows a variety of different combat methods, and while allowing the player to go at it stealthy, get up close and brawly or hang back and go rangey; the game encourages you to blend your play style and use multiple different attack methods depending on the challenges in front of you.

I’m not typically a stealth kind of guy, but the way in which Guerrilla has implemented it into combat here is exactly how I want it and I was LIVING. Areas that you can stealth in a very easy to identify and find; whether you’re visible or audible to enemies is very clearly communicated, making it fun and seamlessly blended into the rest of the combat. The ranged combat is also some of the best I’ve experienced, with the addition of traps and other tools to keep yourself out of harm’s way, skills with your bow are essential to a fun play through. I highly recommend picking up the ‘Concentration Skill’ as soon as possible though, it’s invaluable for dealing damage to those critical weak points on enemies, while keeping the flow up.

Interestingly, well interesting for me anyway, the HUD is split into two separate systems. The standard game UI with healthbars and ammo is listed in menus, but the analysis of the world, creatures and people is handled by a holographic interface belonging to the character. I feel this diegetic interface, from a narrative perspective, helps realise Aloy as a character of her own. This separation allows the player to distinguish information that she as a character has, from that which you have as the gamer. The Holographic system, known in game as “Focus”, assists Aloy on her journey, providing specialised information on beast tracking, weak spots, waypoints and other information that help her become the formidable warrior she is.

As the game progresses, the world opens up and reveals more staples of the action adventure genre; there are tower points to explore new regions, and underground dungeons full of mystery and mini bosses. All these however have been beautifully crafted into the game world. Nothing feels like an afterthought or like it doesn’t belong. Guerrilla have crafted an incredible universe and perfectly maintained the intended feel throughout.

“…this diegetic interface, from a narrative perspective, helps realise Aloy as a character of her own.” 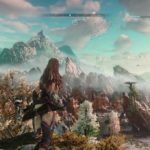 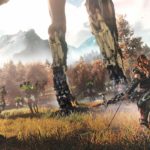 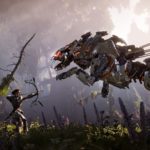 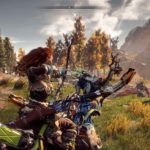 But what wilderness survival-ish title would be complete without a crafting mechanic? Now crafting systems are usually a major point of frustration for myself, but here it feels super easy to navigate, and not-at-all invasive. There aren’t ten-bajillion different resources you need to be collecting, and the ones you do need have straight-forward names, making it easy to keep track of what you need and where you can find it.

Resource gathering itself is also lovely and simple; plenty of things around that you need and easy ways to collect as you’re traveling. It’s exactly what it needs to be and doesn’t just end up frustrating the player by being a nuisance. Oddly enough you actually need to craft kits to fast travel. When I first came across this requirement I was sure it was going to annoy the living hell out of me, but in the end, I just felt it added the perfect amount of scarcity to the fast travel system, encouraging me to save my resources and just travel by foot or Strider-back where I could instead of just teleporting around the map as I saw fit.

If I had to nitpick at something, I will take issue with some of the boss fights. For the first time in a while I went out of my way to do some of the side dungeons, half because I wanted some more experience before pushing forward and half because I really wanted to find out more about the world of Horizon Zero Dawn. They were actually quite fun and incredible to explorer, but when I end up having to resort to online guides to help me get past a boss fight; I take this as a failing of the game, not myself.

I feel Horizon was let down on some occasions to adequately teach me what I was supposed to be doing in some encounters, leaving me to just die over and over again, building up frustration and resentment. But this is a relatively minor complaint; for the most part I found the game does an excellent job at tutorialising skills and abilities. I’d just have liked some extra love in some of the tougher fights, especially if it can see me struggling. In an age with so many tiles vying for the players attention; allowing them to leave in frustration is simply not an option.

Horizon Zero Dawn is one of my favourite games of recent times, in fact it’s probably up their as one of my favourite games period. Not since Tomb Raider 2013 has an action adventure title engaged, surprised, excited and thrilled me like Horizon Zero Dawn has. The narrative is engaging, beautiful and original, the characters are interesting, relatable and endearing, and the gameplay as a whole is exactly what I want. If you’re a fan of the genre: this isn’t one to miss and if you’re a fan of giant robot dinosaurs, and let’s face it, who isn’t; Horizon Zero Dawn is a game you should have started playing yesterday.