Styx is back and he’s back with a vengeance; oh and he’s definitely more opinionated and filled with a bunch of hilarious observations too! Cyanide studios and Focus Home Interactive have teamed up once again to bring everyone’s favourite goblin assassin to life in Styx: Shards of Darkness. Whilst 2014’s Master of Shadows was where we were officially and truly introduced to our greedy, blunt and humorous master thief of a goblin, he originally appeared much earlier in 2012’s Of Orcs and Men.

In Shards of Darkness we immediately jump in after the events of Master of Shadows. Styx may have just survived the battle and subsequent collapse of the Tower of Akenash, but of course this doesn’t mean you just go and give up your old life.The game starts off with Styx back on the road thieving and killing for coin and amber. Sweet sweet amber. (Wait, didn’t amber get us into this mess in the first place?).

Styx’s own unique brand of hilarious observations between and during missions is something which developer Cyanide has expanded further in Shards of Darkness. The end result is that you are regularly playing with a smile on your face, even during ill fated demise. Even in death you can’t escape our talkative goblin friend as he pulls a Deadpool and breaks the fourth wall, talking to you personally. Don’t be fooled into thinking he will be cheering you on like a happy little green cheerleader, though. Be prepared to get shouted at for letting ‘HIM’ down – and you’d better order in a pepperoni pizza with extra cheese for the poor guy while you’re at it please, because this is gonna take some time! 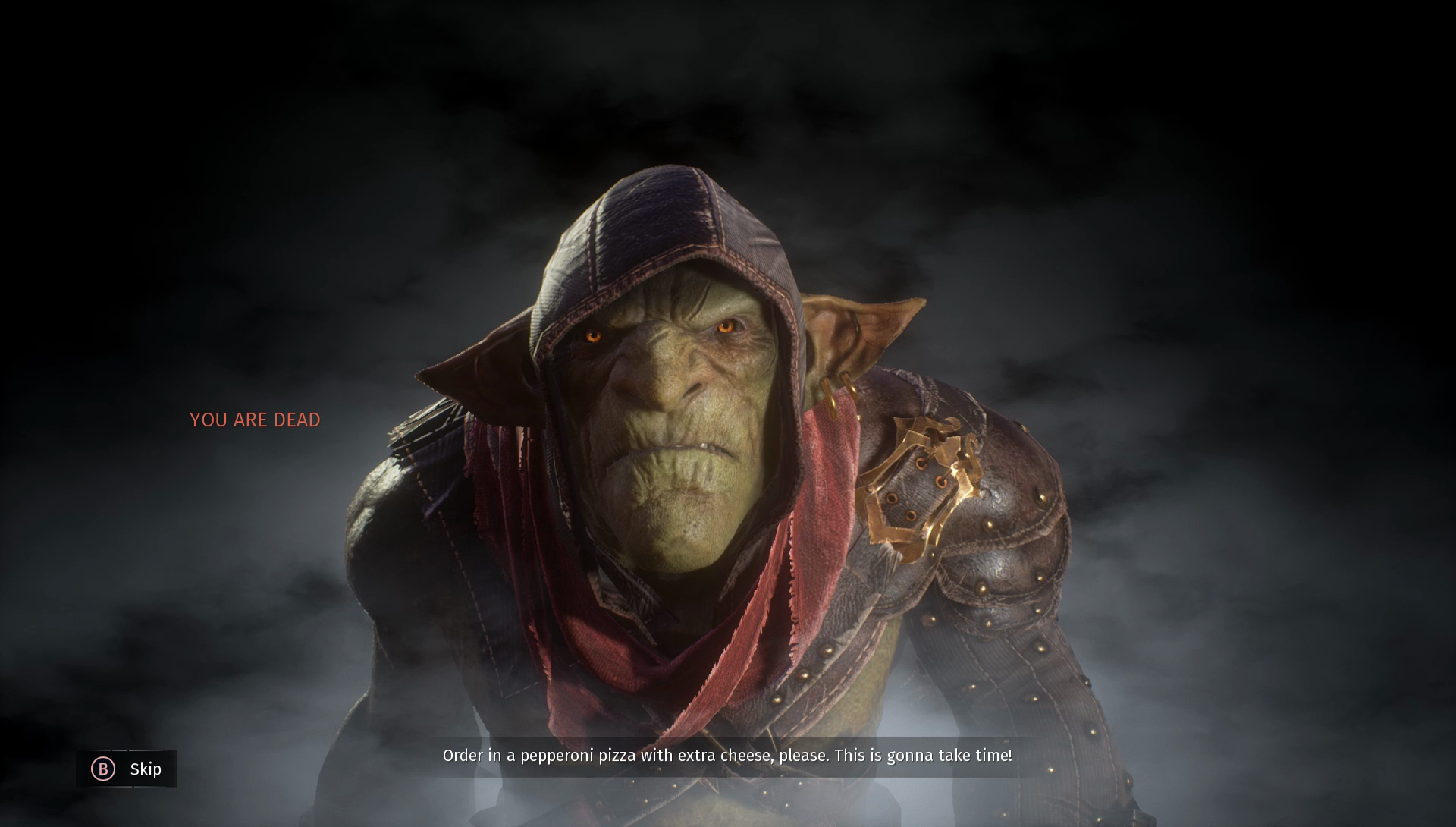 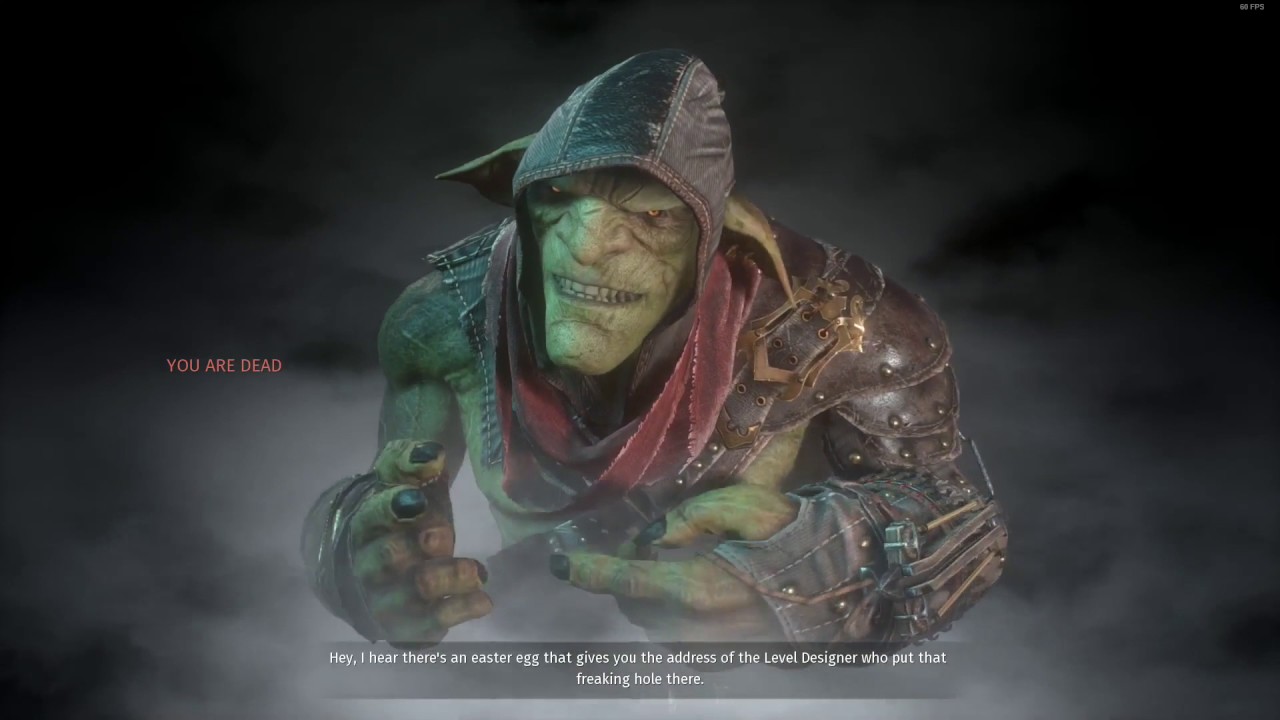 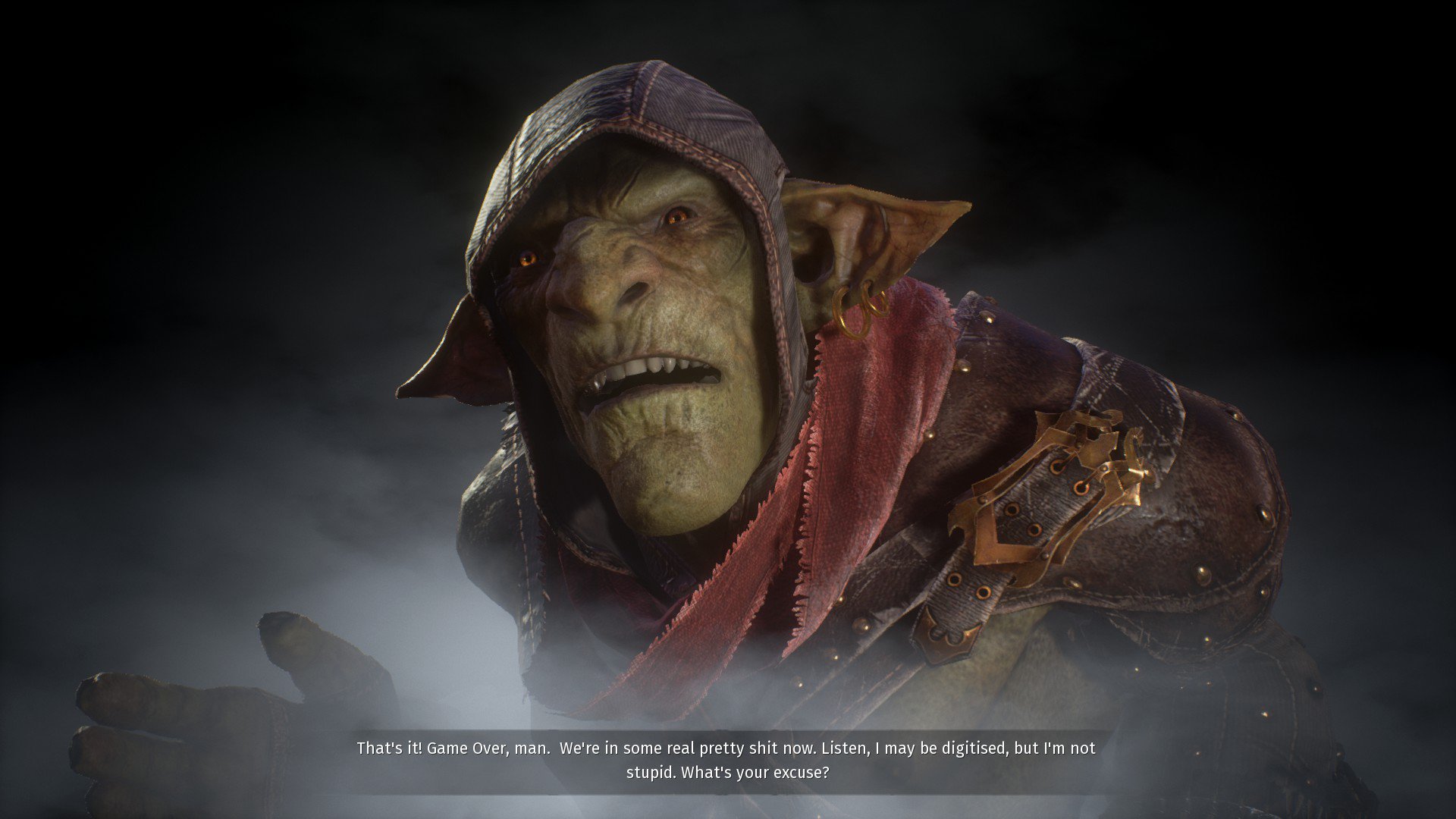 In terms of storyline and overall plot in Styx, don’t be expecting anything on the scale of Dragon Age or The Witcher here. Whilst there is obviously more core depth than your basic dungeons and dragons campaign, it lacks the deeper satisfying blend of history, culture and politics which is commonly found in more complex and profound fantasy world based games. Basically, Styx boils down to the standard tropes; goblins or the ‘Green Plague’ are bad and thus are persecuted, humans are supposed to be good however are kind of boring and elves, well elves are mysterious.

Speaking of the ‘Green Plague’ you’ll hear this mentioned a lot in the world of Shards of Darkness, because of an event which occurred during the prequel which lead to a huge influx of goblins to be unleashed upon the world, causing devastation across the human lands. This in turn causes the humans to create the C.A.R.N.A.G.E. squads (Combatants for Attacking, Reaping, Neutralising and Annihilating all Goblins to be Eradicated). The true irony here is while we see human goblin death squads and hear Styx himself even talk about the issue as he slinks through the slums and brothels, we rarely see a goblin in the game or get to witness how their so called ‘Green Plague’ status has become so destructive.

Moving onto combat, players who have formerly played Master of Shadows will undoubtedly notice you have the same ability to achieve your goal in numerous different ways. While the main premise of the game is stealth, this doesn’t necessarily outline your approach. As Styx, you have the ability to choose how you play: do you act more like a thief, simply avoiding guards, moving from cover to cover to obtain or complete your objectives, only killing when necessary? Or do you play more like an assassin, utilising darkness and cover and killing those in the path of you completing your goal?

The game does penalise you for choosing a path that is anything less than the perfect, no lethal, no detection run, so one would be forgiven if you felt the overwhelming temptation to reload for it. But if you do this, you could miss out on some other truly unique ways to play the game, of which there are plenty. From barfing up your “special green hot sauce’ on their food, poisoning their water or sabotaging the alarms, you’ll not be short on ways to cause murderous mayhem.

“Kill ’em all I say!
Damn shame about all those experience points though.”

I would normally gravitate towards the perfect non-lethal options in stealth games as personally I enjoy the challenge of it. But in Styx, everyone you come across is so instantly detestable. Kill ’em all I say! Damn shame about all those experience points though.

If you do choose to go the stealth approach rather than murdering and stashing everyone in your path, then depending on your ability and the level difficulty you choose you could find the game actually more difficult this way. 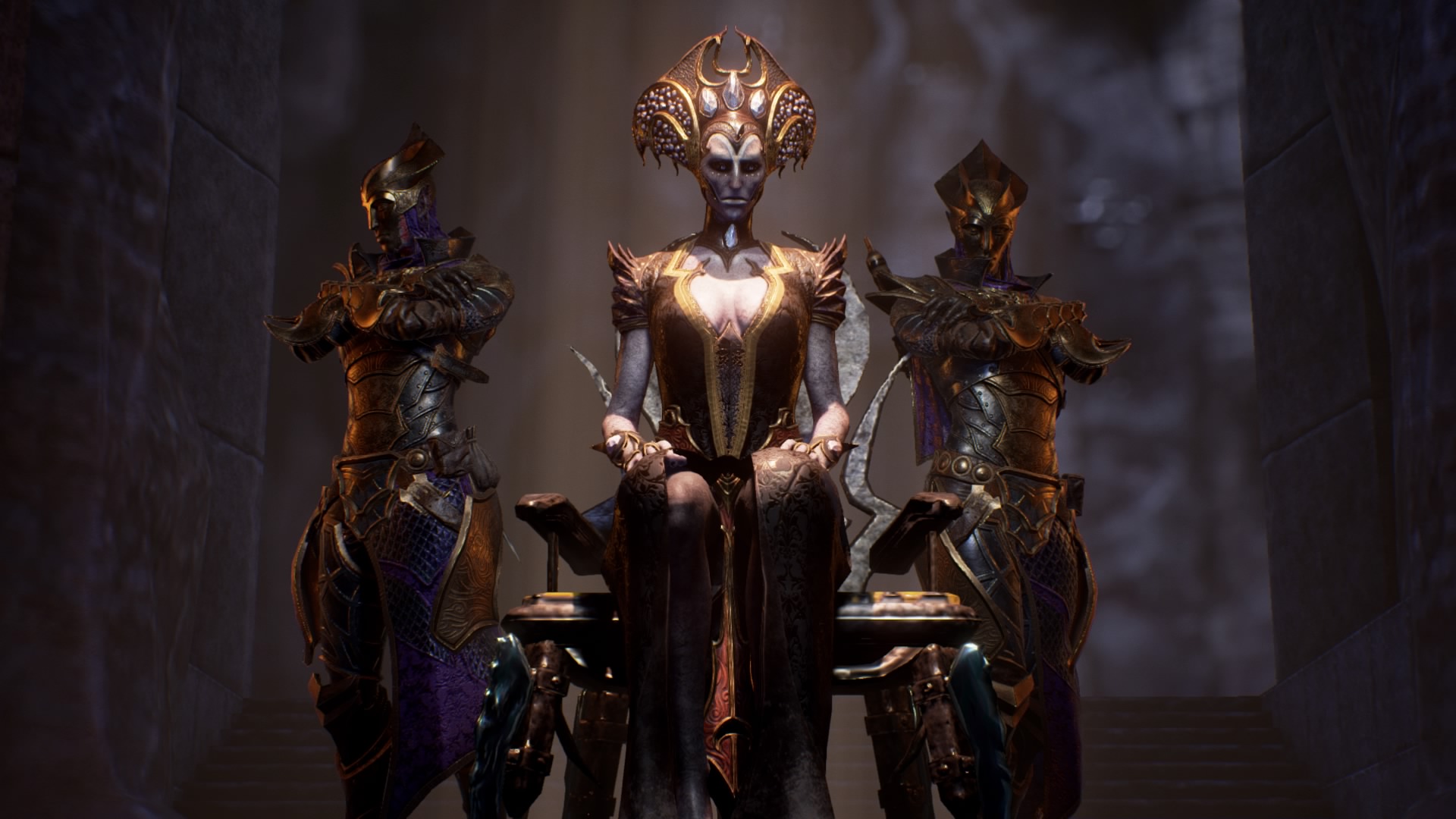 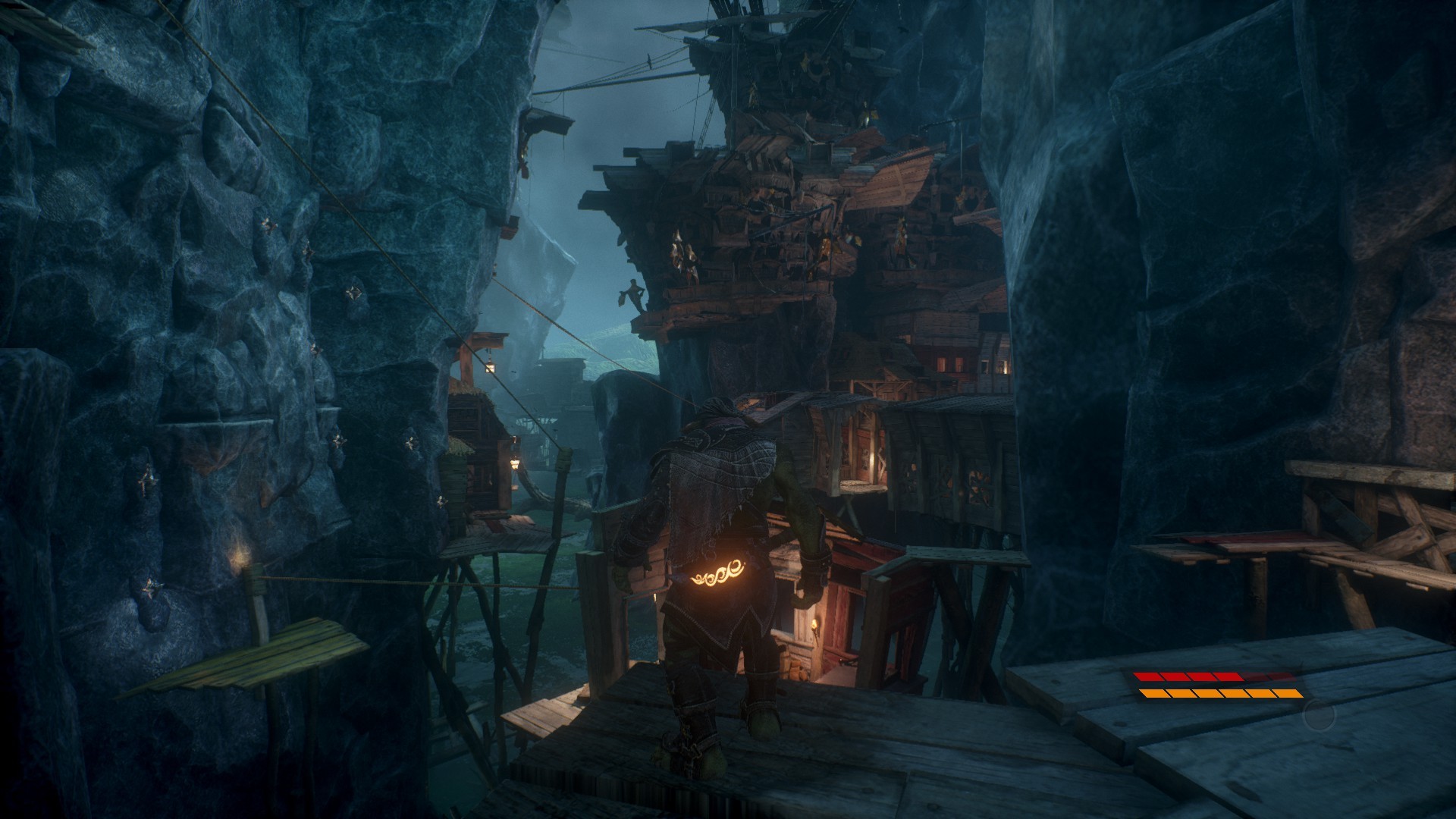 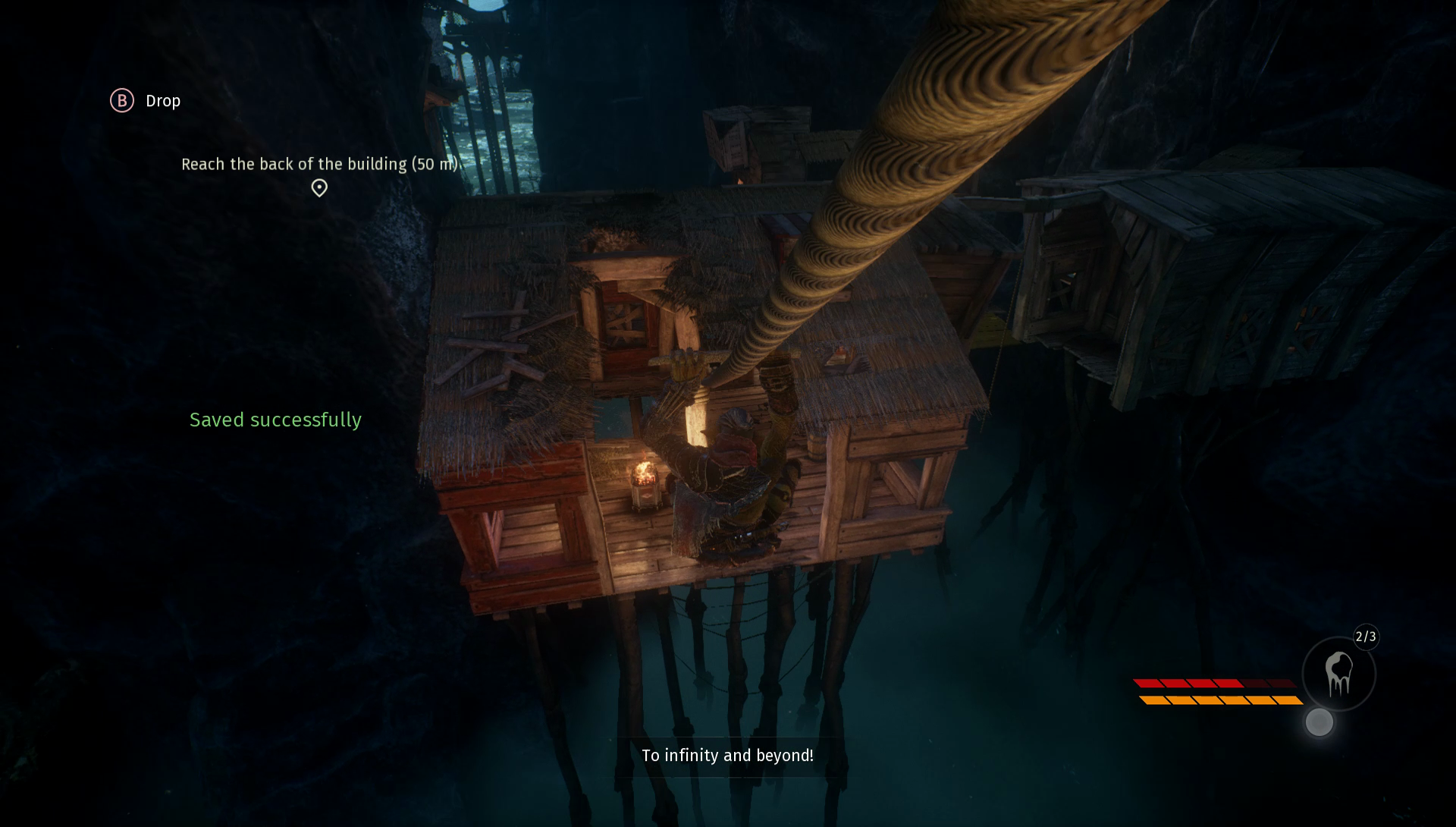 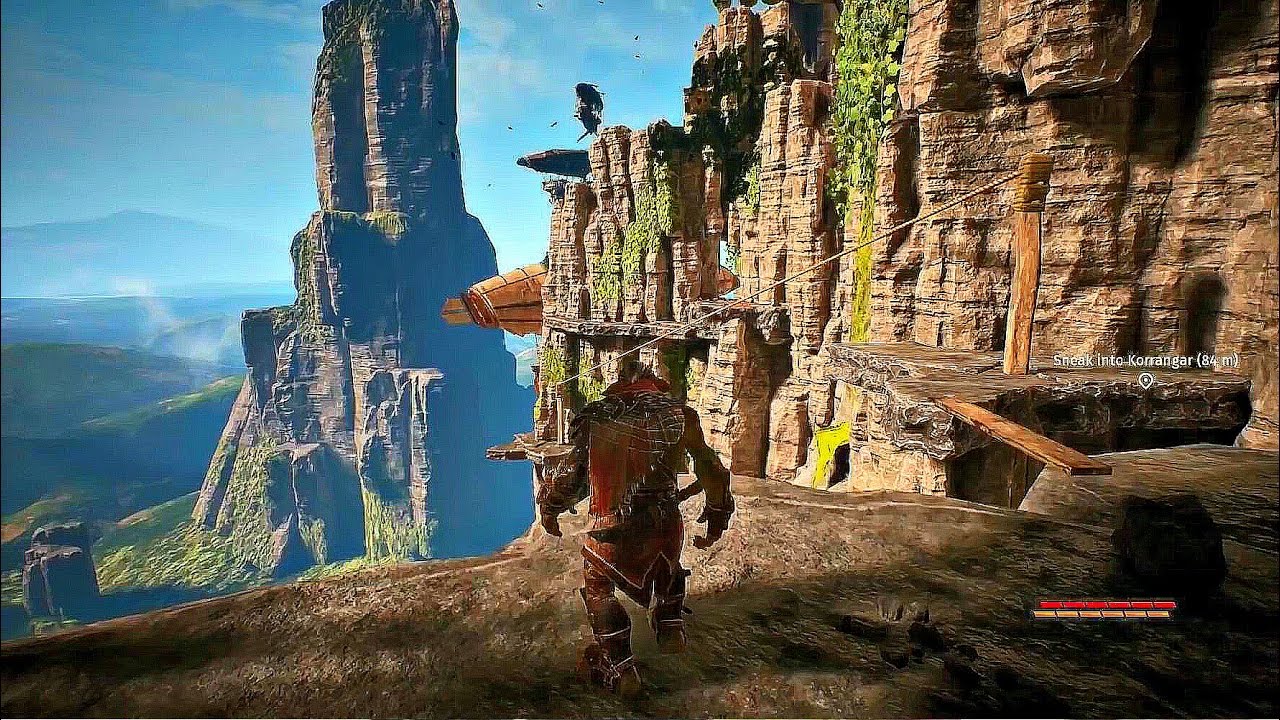 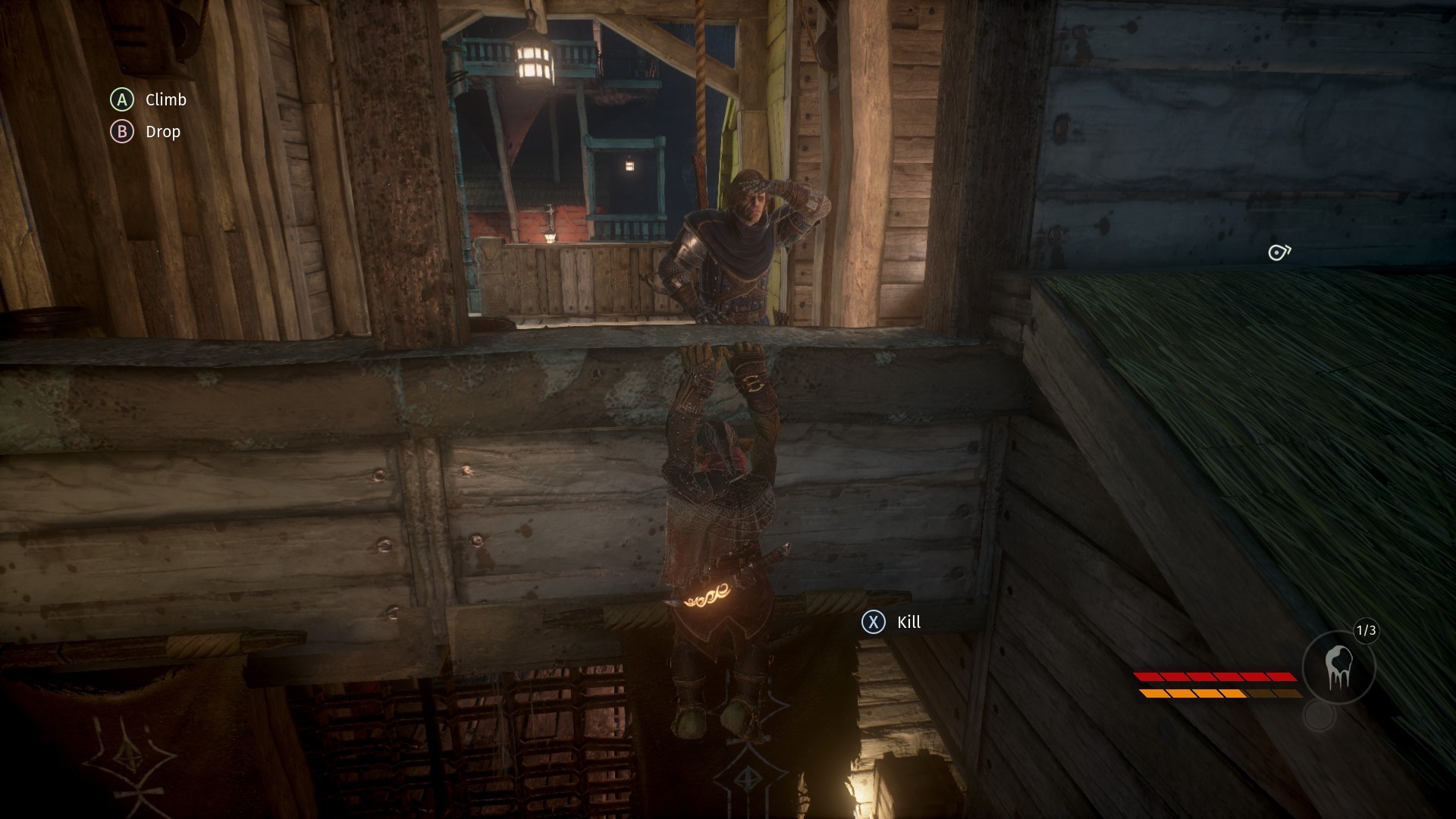 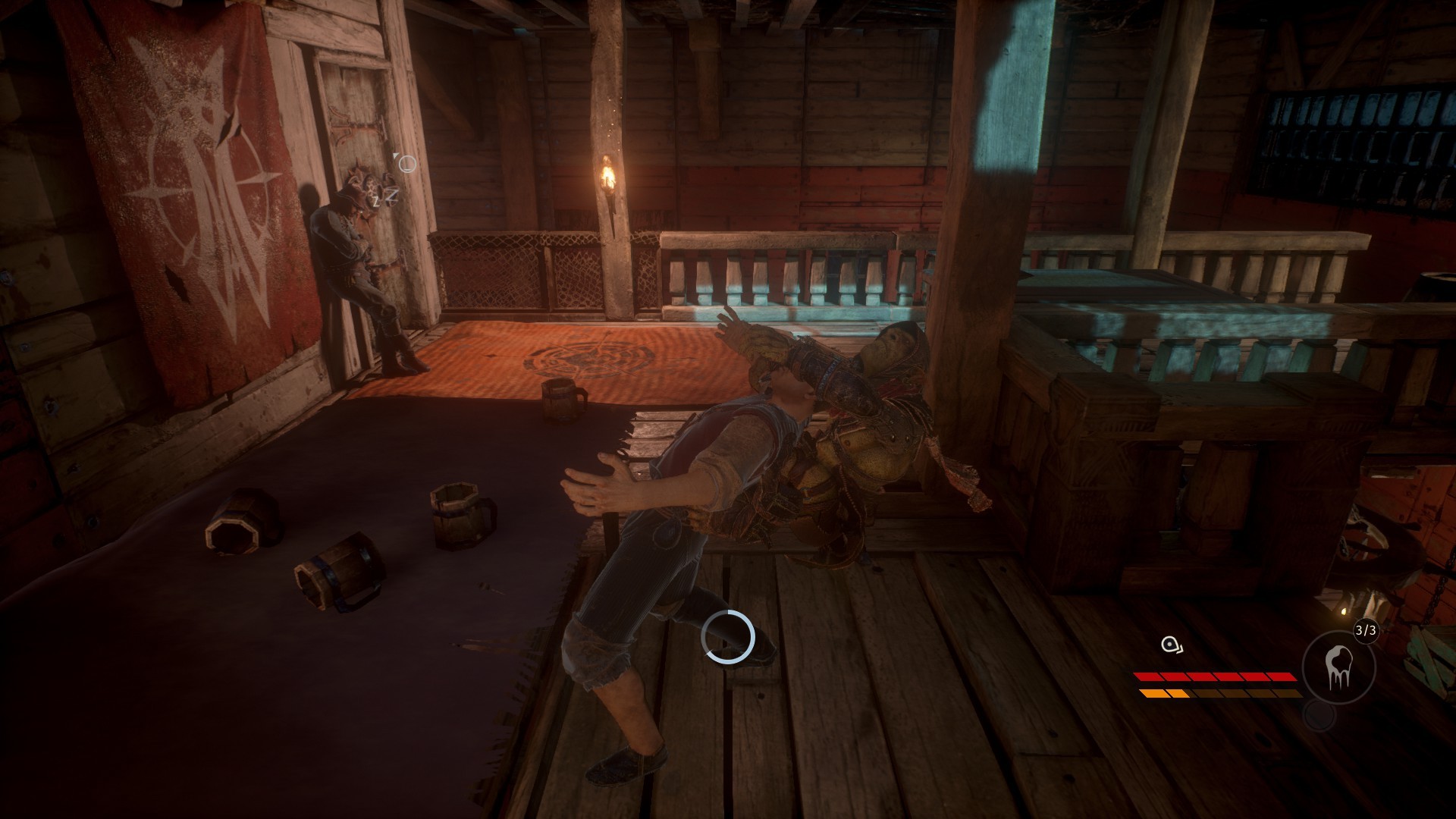 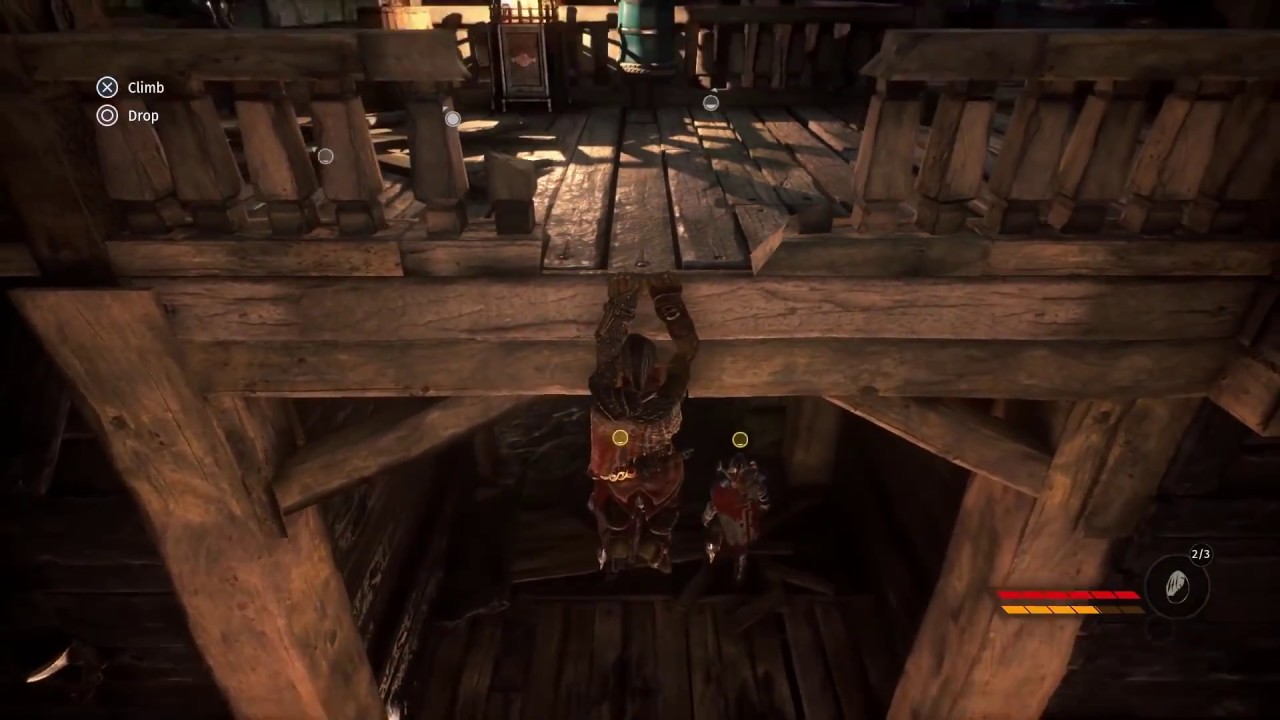 The controls for Styx are pretty much as you’d expect and running, jumping and climbing all work reasonably smoothly, but there are times when the game gives you cause for frustration. The parry system which Styx uses for attacking is my greatest headache. Styx can only attack in a parry attack if he’s been spotted, which means you have to time your attacks to perfection, this in itself isn’t the issue, it’s that the parry feature is simply only part one of the attack and you’ll still need to perform a kill attack after your successful parry. It’s not always reliable and is nigh impossible to pull off with any regularity, and becomes less reliable the more guards that show up.

Ideally you don’t want to be caught in these situations where Styx is forced to attack back, rather opting for stealth assassinations if you’re going on a killing spree like myself, but sometimes the goblin poop can hit the fan.

Even so, with your arsenal of goblin toys up your sleeve such as amber vision and magic goblin clones, there really shouldn’t be any obstacle Styx can’t overcome – even some slightly poor game mechanics.

One of the great new additions to Shards of Darkness is the addition of a co-op mode, with one player playing as Styx and the other his clone; now together with a friend you can finish the entire game. Playing with two people offers a new dynamic to the gameplay and more options to completing the game, but it also requires good communication. Your probability for detection and being hunted increases, and with health and resources reduced to help keep the balance, it’s not going to be an easy task just because you brought a friend along. This is definitely a great addition to the game and good fun to be had for you and a partner.

The story, while not amazing, is at least fun, combined with the humour and one liners being flung out by Styx it will see you smiling and laughing even in times of sheer frustration. Overall this is another great sneak and stealth game I’m excited to be adding to my stash (err, I mean collection) and one that will definitely be getting additional play-throughs.