Giant demons, fast paced battles, and RPG elements, all taking place in Feudal Japan? What more could a gamer ask for in Toukiden 2? This JRPG had a lot to live up to in my mind. After seeing an innumerable amount of trailers showcasing a diverse range of gameplay aspects. After playing Toukiden 2, it felt as though the game was coasting on the popularity of another well-known Japanese gaming series – Monster Hunter. Of course not a complete carbon copy, Toukiden 2 does its best to stand out as its own separate entity in this fun and often challenging game – and the thing is, it succeeds.

Toukiden 2 starts two years after the events of Toukiden Kiwami and follows the tale of young slayer who has taken up arms against demonic creatures known simply as Oni. During a battle, in which a horde of powerful Oni attack a Meji-Era Yokohama, the main protagonist is whisked away through an unknown vortex, only to find they have been rescued by an eccentric Professor. After introductions, it is made apparent the young slayer is no longer in Yokohama, nor are they in their own time, having been hurtled ten years into the future. The world is now overrun by Oni and only a few small pockets of humanity have survived since an event known as the Awakening occurred.

In a fairly obvious turn of events the Slayer is tasked with protecting the village of Maharoba and going out to explore the surrounding area, all while getting to the bottom of the Awakening incident and hopefully finding a way to save the world – all in a day’s work, really. Players will get to meet a colourful cast of party members to fight alongside and progress the narrative. Toukiden 2’s story is what really drives the game along, despite parts of it being a little predictable at times; you can’t help but want to see how the events play out. 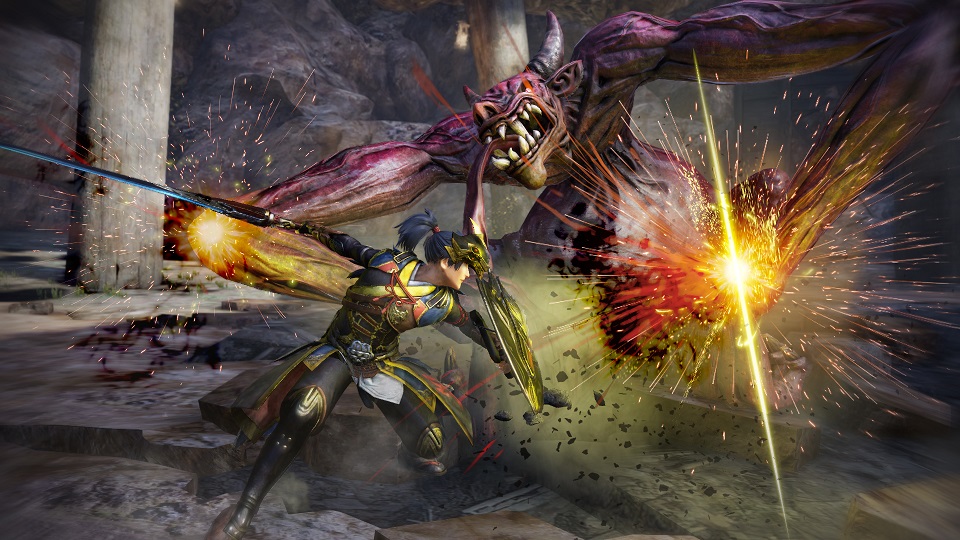 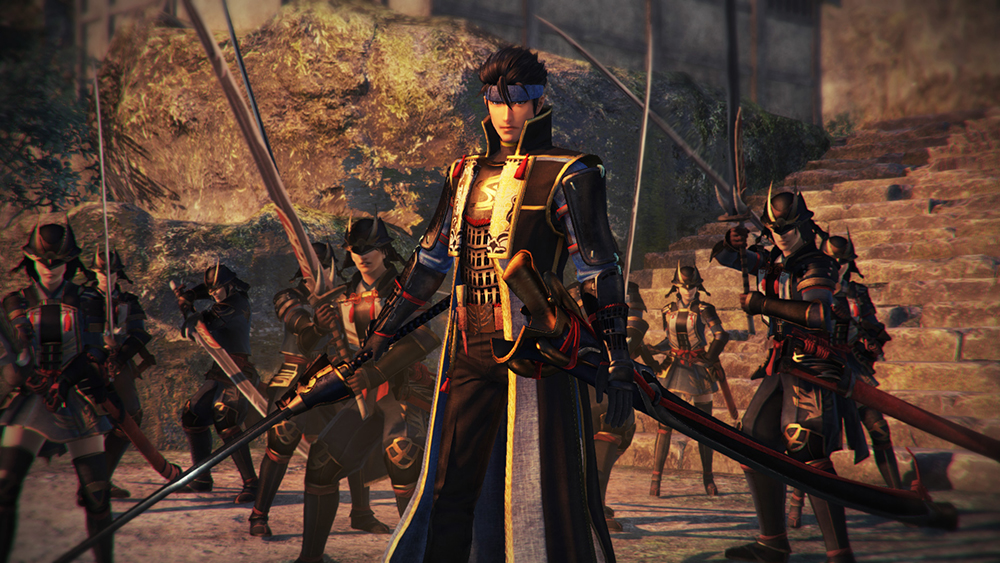 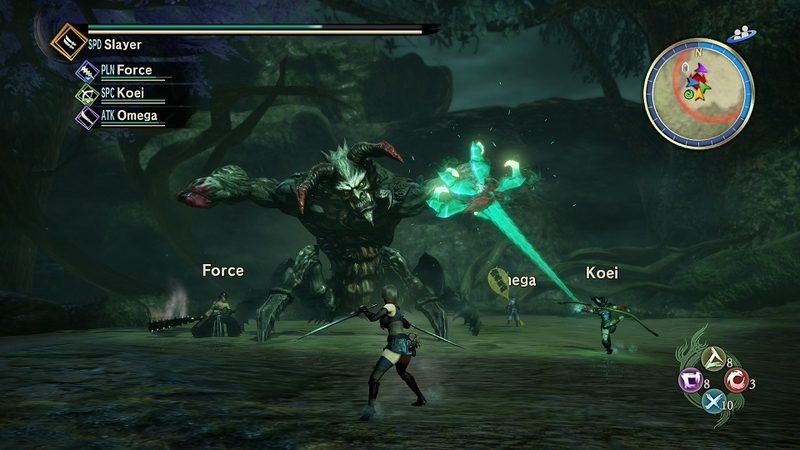 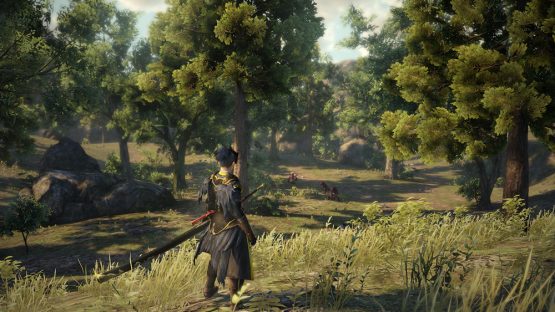 “…a mitama’s abilities will gain more proficiency and potency, and once masted becomes an invaluable resource. The combinations are practically limitless.”

Toukiden 2’s battle system plays like a standard hack and slash with your main character being used as team leader in all encounters. With two variants on attack, either light or heavy, the way you fight will depend on your weapon of choice, as players may choose from over 10 different weapons, including two-handed longswords, daggers, spears, and guns. Taking on smaller enemies in quick skirmishes is a walk in the park, but when it comes to larger enemies some method and battle assessment is needed. Giant Oni can take much more damage and time to bring down, and will heal themselves if players dawdle. Through attacks, players will be able to scope out a giant Oni’s weak points, exploit, and destroy them.

Toukiden 2’s new battle mechanic is the Demon Hand, a physical manifestation of a fighter’s spirit. It can easily close the gap between player and monster by grappling a part of the targeted Oni and propelling the player towards them. It is also able to remove weakened body parts of larger Oni to then be destroyed, making for an easier time during battle. The Demon Hand has uses outside of battle also; it can help players traverse high-up ledges that would normally be unassailable, or remove certain obstacles out of the way to reveal new places or release additional Oni to fight.

Players are able to equip the spirits of over 200 past legendary heroes to their weapons, armour, and Demon Hand for increased buffs, special attacks, and abilities. These spirits known as mitama and can be found all over the game, mostly through battle and victory over gigantic Oni, but can occasionally be obtained through certain side quests and missions. What’s fascinating about the mitama is that as a player progresses through the game, so does your mitama. Through battle experience, a mitama’s abilities will gain more proficiency and potency, and once masted becomes an invaluable resource. With over 200 to use the combinations are practically limitless.

Additional in-game content such as side-quests and monster missions are a fun distraction from the main story. Once progressing through enough of the game you’ll be given the chance to take on missions that require you to take down Oni under certain conditions that become progressively harder the further you go. Side-quests are found all throughout the game and usually consist of item hunts or the slaying of certain Oni breeds. 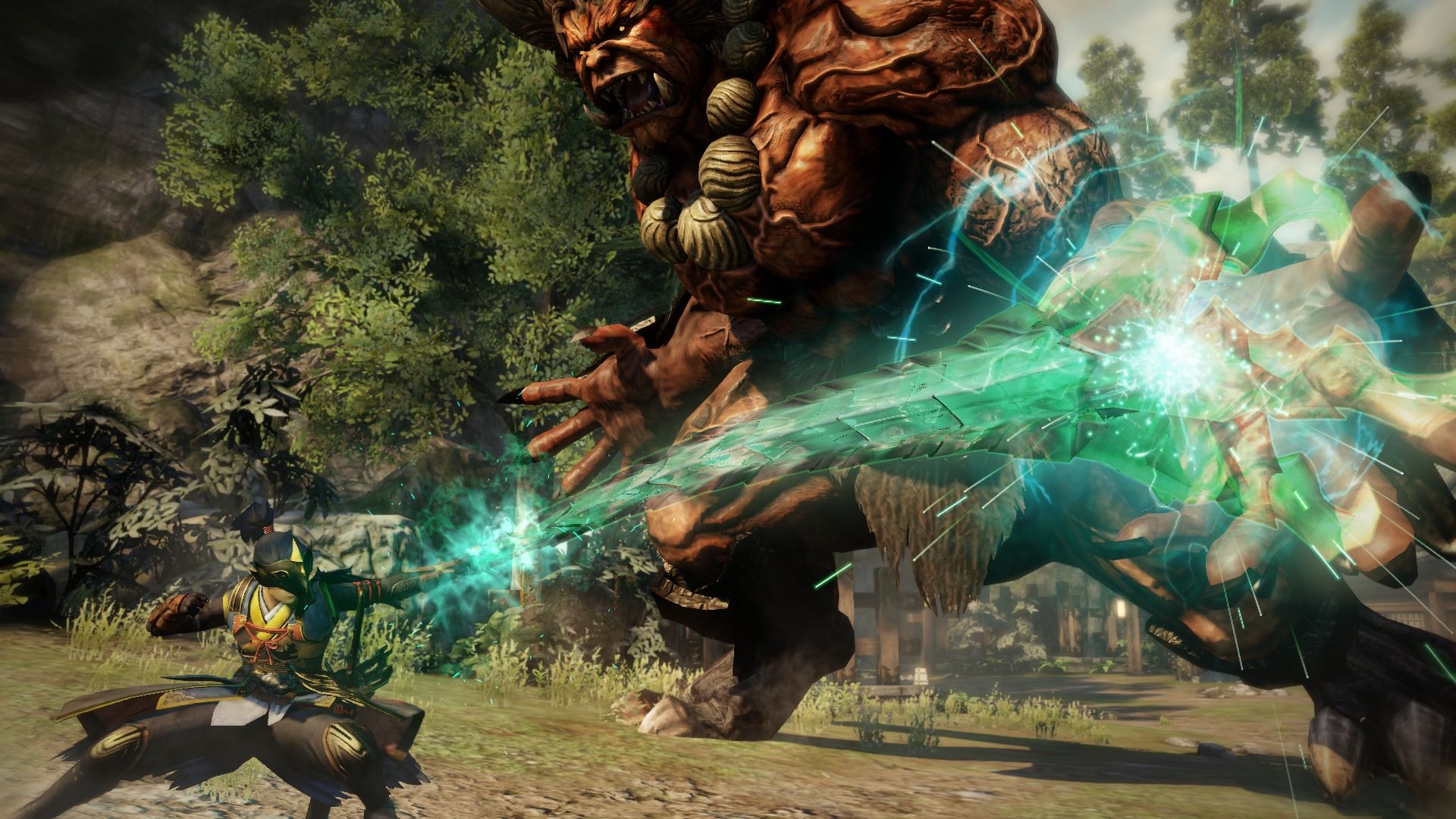 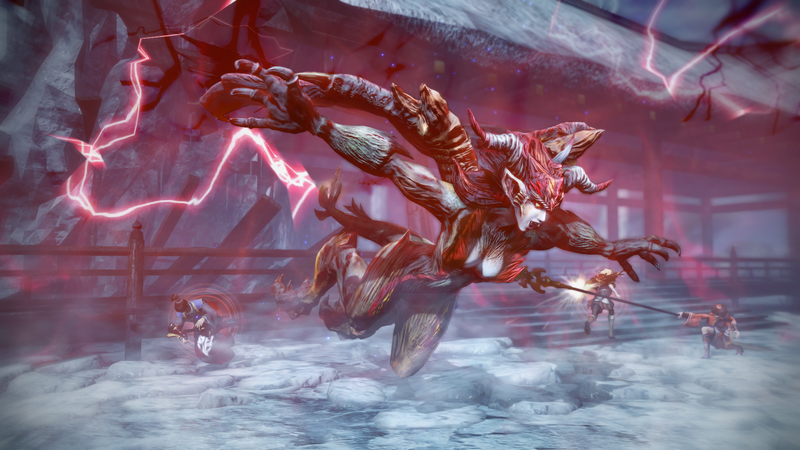 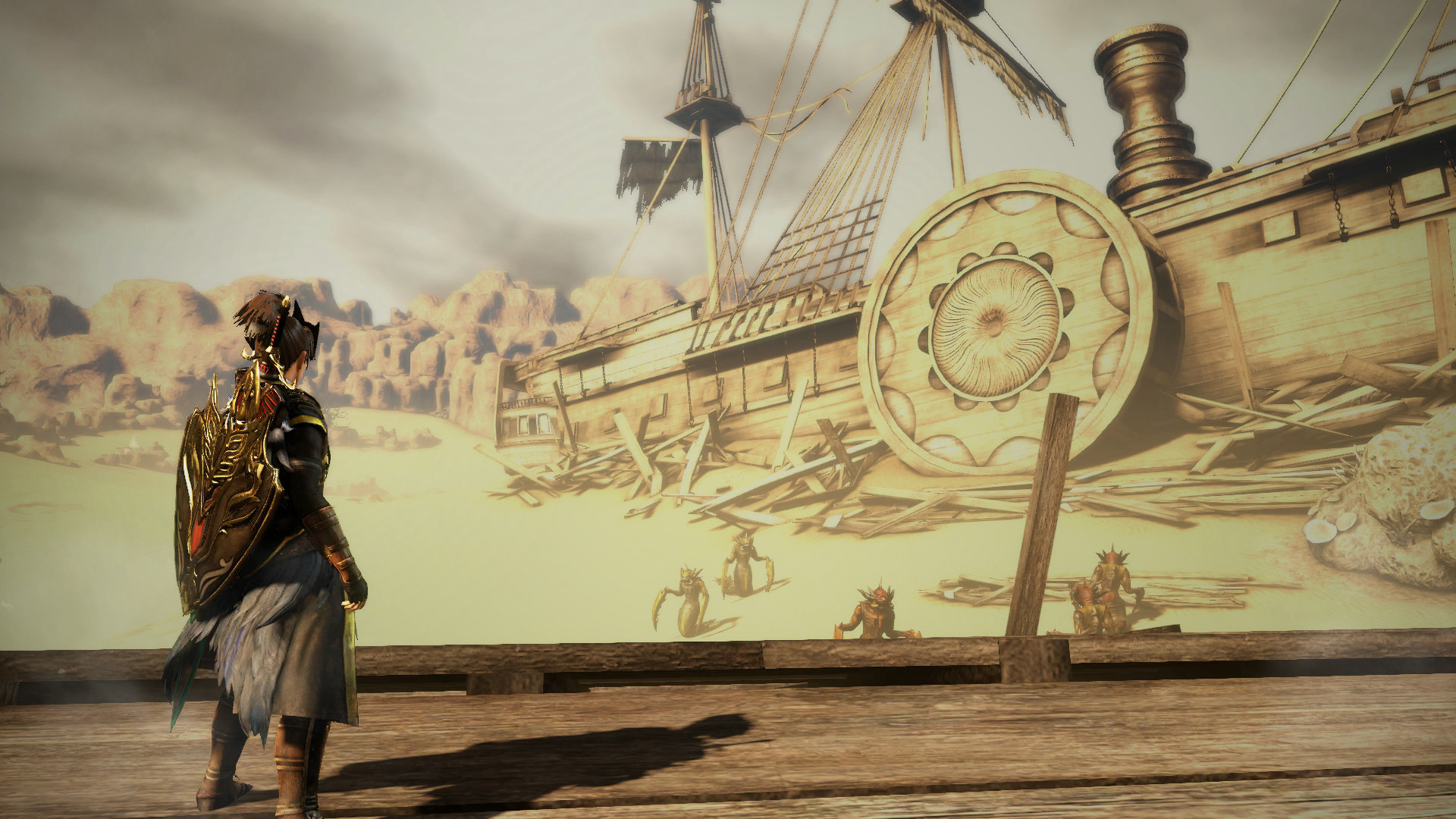 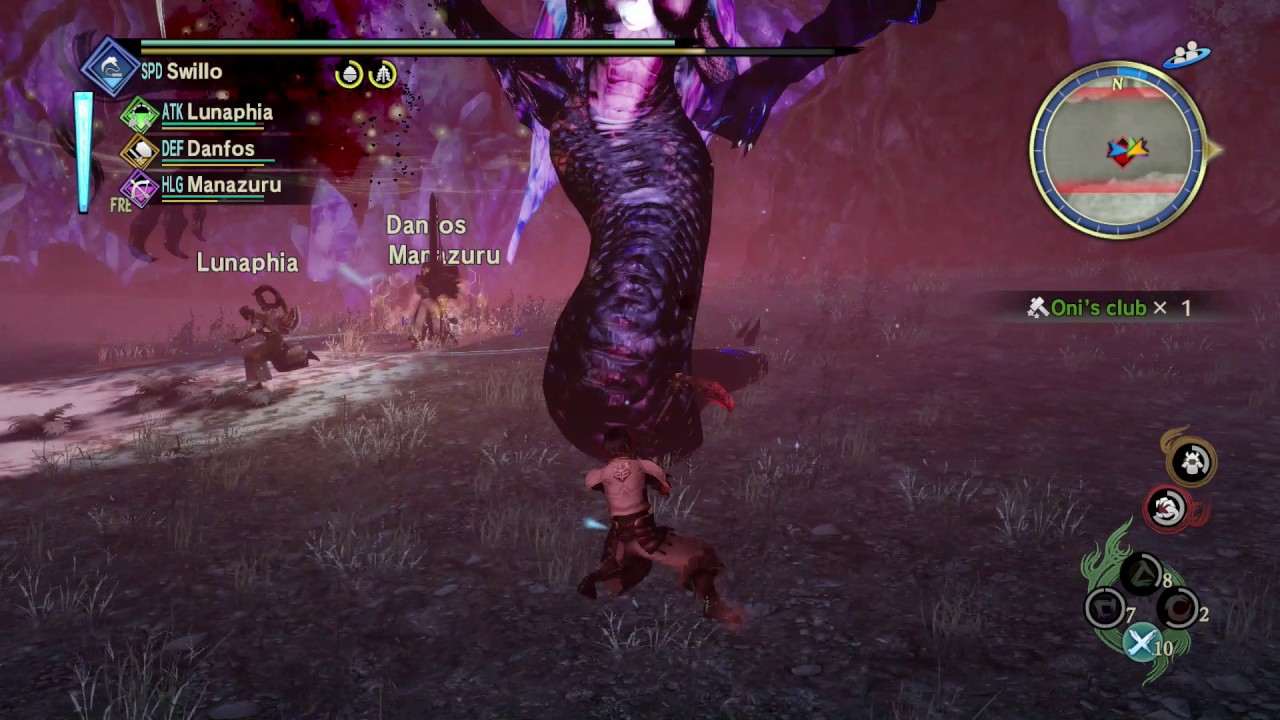 Players looking for online action won’t be disappointed either. Toukiden 2 offers battle-ready slayers the opportunity to team up with other players in the command hub where they can play with up to four other team members. These joint operations offer players the opportunity to acquire certain kinds of weaponry and armour that would be beneficial to them in normal gameplay.

Joint operations can also completed offline through a data doppelganger that mirrors the online version of a slayer previously played alongside with. Lastly, players can also share items with others by depositing them into chests known as reliquaries. By depositing an item it and leaving it there you are essentially giving away an item that you may no longer need, but in return you’ll receive a different item of equal value.

Despite the many interesting aspects of Toukiden 2, there are some issues that make playing this game a tad challenging. Toukiden 2 is only playable in a Japanese dialogue, which for some can be rather off putting. Even for someone like myself, who is a huge anime buff, it can occasionally be difficult to split my focus between battle and subtitles. What’s even more frustrating is when characters speak while exploring and no subtitles come up at all – it feels like I’m not getting the full experience. While I played Toukiden 2 I also couldn’t help but shake the feeling that I was just playing a Monster Hunter game with extra content. That’s not to say I didn’t enjoy myself, but it felt like I was going behind my other games back and was cheating on it.

As monster hunting JRPG’s go, Toukiden 2 tries its very best go above and beyond and it actually does succeed where many others would have failed. Again, this is due to the interesting story, colourful characters, and multitude of battle options made available to players. It does lack originality from time to time, making it hard to feel fresh and engaging on occasion. While Toukiden 2 doesn’t feel unique in a crowded genre,  it has achieved its goal of being a fun and engaging JRPG that is worth your time.