I’ll admit I was initially skeptical when one of the biggest new titles announced for the Nintendo Switch was a definitive edition of one of the Wii U’s most successful releases, but the more I play Mario Kart 8 Deluxe, the more I think it’s one of the smartest decisions Nintendo have made. Mario Kart 8 was, for my money, the best Mario Kart game to date. It refined the series in a way that was slick and modern while remaining brilliantly nostalgic, and now we get to experience it all over again, but better, on a console that it feels like it was truly made for.

Using the new hardware, Mario Kart has never looked this good. Each track features a gorgeous amount of detail, from riding along an underwater eel to the flashing lights of a disco arena, I was pleasantly surprised with how many times I got distracted by the updated visuals of a game I already put a hundred hours into back in 2014. Not to mention the inclusion of all previous DLC from the Wii U version, bumping it up to 48 race courses and over 40 characters; the value is already bursting at the seams.

The biggest new inclusion is the addition of a new battle mode, something that fans have been crying out for since it was omitted from the original. There are five different game modes here, with eight battle courses that have been designed specifically to capitalise on the mayhem. Balloon Blast is your standard elimination fare with all items on the table (along with some new ones), while Bob-omb Blast is the same, but bombs are the only choice, of course. These modes have the most “classic” Mario Kart battle vibe, and they are incredibly fun and chaotic. 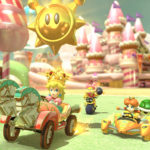 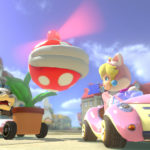 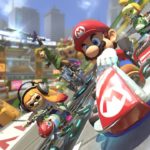 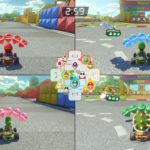 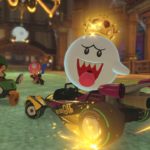 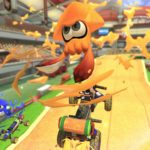 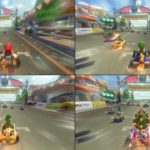 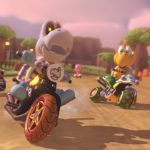 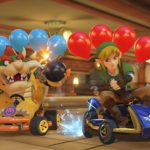 Shine Thief plays like a fast-paced version of ‘keepings off’ and Coin Runners has you stealing coins from your opponents; but its Renegade Roundup that stands out as the most successful new game mode by far. It’s like cops and robbers, with the outlaws trying to escape from the team of cops, who have Piranha Plants chomping at the bit to catch them. As the outlaws on your team get caught, they are placed in a cage, but can be freed if you are quick and clever enough to drive over and free them. It’s stressful as your buddies get caught one by one, and being the last one standing, making a play to get them back on the course is a massive buzz if you manage to pull it off.

“There’s nothing quite like pulling out Mario Kart from your bag quickly and easily for a racing session.”

Mario Kart 8 Deluxe is a perfect fit on the Nintendo Switch, due largely to the versatility of the console and how well-suited the game is to public multiplayer sessions. At home, the ability to play many ways with the Joy-Con controllers in pairs or separately is great, especially since it only takes two sets of Joy-Cons to allow four player split screen fun times.

As a portable game, it’s a dream. There’s nothing quite like being able to pull out a HD Mario Kart from your bag quickly and easily for a four player racing session. It was one thing having the popular franchise in your pocket on the 3DS, but being able to now share the experience out and about with your mates is a nerdy dream come true.

Even subtle changes, like the ability to carry two items at once and some additional assistance for new players, improve on the previous formula. It’s a shame then that there hasn’t been a major improvement when it comes to the state of online play. It still works, but with no way to partake in voice chat through the Switch and still no ability to invite friends into matches, it feels like a missed opportunity to instil confidence in the consoles online multiplayer functionality moving forward.

The allure of Mario Kart is still strong amongst fans and casual gamers everywhere. Mario Kart 8 Deluxe takes the original, includes a whole bunch of extra content, a fantastic new battle mode and allows you to take it with you everywhere you go. It looks stunning and injects a much needed boost into the console two months after launch; basically, this is the best way to play the best version of Mario Kart ever created, and is a must-have title for all Nintendo Switch owners.