Out of all the sports in the world, Aussie Rules has to be the most difficult to translate into a video game. Being able to kick the ball to anyone you want on the field, handball, mark, tackle, play on, different types of kicks and a range of umpiring decisions that are foggy at best means that there are a lot of variables. Despite this, developer Wicked Witch has done their best once again to recreate The Beautiful Game to the best of their ability with AFL Evolution, and while the production values aren’t exactly up to scratch, we’re pretty lucky to have such a niche game exist in the first place.

Firstly, to address the elephant in the room, this is far from an evolution. The gameplay is almost exactly as it was in AFL Live 2, which released last generation back in 2013. That game was not without its quirks, so it’s baffling that more has not been done to the formula to improve on the mechanics almost four years later. Things work much the same, with marking still coming off as the clumsiest aspect, a constant matter of good timing and jostling for position that feels stilted rather than natural.

The main trouble with the gameplay is that 99 times out of 100, going from one end of the field to the other doesn’t feel earned. What makes AFL so exciting to watch is when a tight passage of play mixes strong handball decisions, good kicks and finding holes in the opposing teams defence, leading to an exciting and creative goal. Here, you’re mostly just trying to move the ball forward from one area to the next, with no real understanding of which players are ahead of you or what your options are. When you do chain together an epic moment, it’s fantastic – but these moments are few and far between.

“This makes the variety of modes feel insignificant, as the matches often just turn out to feel the same.”

Once you’ve figured out the key things you need to achieve to consistently score, it becomes easy and repetitive, with no real adjustment to the AI in order to figure out which loopholes you’re using. This makes the variety of modes feel insignificant, as the matches often just turn out to feel the same. Going for a premiership is entertaining enough mostly because it’s nice to take your club and see them on the top of the ladder (for a change); the coach mode also fares better, making it more of an AFL manager simulation rather than the regular core gameplay, which is a good change of pace. 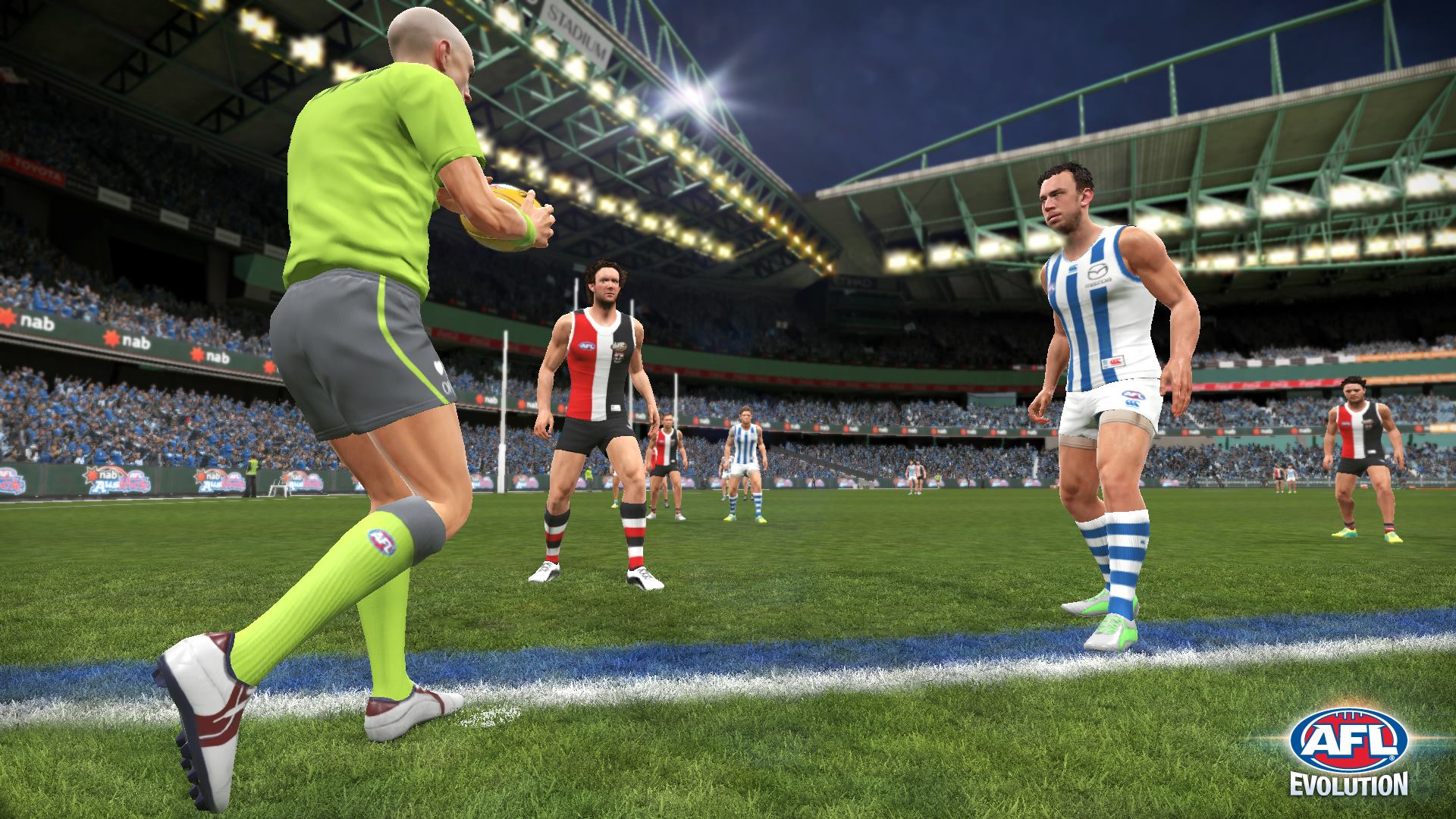 The new career mode allows you to create a player and build their skills from the ground up, but this often feels like a chore; putting on the boots of that player and taking to the field only as them means you’re left waiting around for the ball a lot, or simply running around hoping for a lucky opportunity. Often your rookie is so tired from all of this that you’re substituted off for the remainder of the game after just one quarter, which a) is not how AFL works and b) means that majority of the stats you’re trying to upgrade are left to be randomly generated. Ugh.

AFL Evolution is a pretty rough game to look at. Animations are awkward and unnatural, there’s lots of clipping, player models look a bit off and the field just feels kind of sad. There was a lot of talk about the capturing of player likeness in the build-up to this one, and I do have to say that being able to clearly recognize key popular players like Pendlebury, Murphy, Franklin and more does lend some credibility to proceedings.

Commentary, on the other hand, is just terrible. It’s always been bad in AFL games but this is somehow even worse. Dennis Cometti and Matthew Richardson blunder their way through their lines sounding relatively uninterested, and everything is chopped together so hastily that it comes off as robotic and strange at best, completely wrong at worst. Lines get repeated for no reason and one time the match had finished, victorious hugs all round, my clubs theme song playing, and Dennis very casually says “the rucks are getting ready for the centre bounce”. Are they, Dennis? Are they?

I do want to call out that the women’s league being included is wonderful. The WAFL’s first season only kicked off in February of this year, proving to be a big success for diversity and showing that the ladies can play just as hard and tough as the men. It’s a step towards gender equality (despite there being a lot of work to do when it comes to equal pay) and the inclusion of them in AFL Evolution, despite the tiny men on the internet having a whinge about it, is also great to see. Essentially they play the same as the men, so it’s more of a skin than anything else, but at least the commentary had some additional recording to include female player stats and the correct pronouns when they’re on the field.

The bottom line is that if you’re an AFL fan and want an AFL video game, you don’t have any alternatives. AFL Evolution has a small budget compared to what you’d see in FIFA, as its appeal is limited to just a portion of Australia and nowhere else. There are some real disappointments and missed opportunities when it comes to enhancing the gameplay, so this can only be called a cosmetic upgrade on current platforms rather than a true evolution of any sort. All of that being said, it’s still a fun way to kill some time with your mates, so if you’re starving for some more AFL action, this will have to do the trick.