Video games are an escape; a way to step into a world that is often unlike our own and experience something unique and exciting. RiME, the new adventure-puzzler from Tequila Works, evoked many emotions within me while I was playing through it, from joy and happiness, and then all the way to the other end of the spectrum to a sad loneliness. As I moved from area to area, solving whimsical puzzles and interacting delicately with the world around me, RiME gave me goosebumps repeatedly. It’s intended to inspire a feeling of recklessness and fearlessness that can only be found in an 8-year old boy… and this, it consistently achieves.

There’s no obvious story in RiME, and no sort of spoken word or written instruction to aide you on your journey. The game uses smart visual and aural cues that prompt your next steps, your only friend being a guide in the form of a fox who will run ahead, attempting to lead you in the right direction. At first, I did find her constant yapping to inform me of its whereabouts to be annoying, but as I progressed and the world around me got darker, I was relieved to have a friend by my side.

Strange statues are all over the island, frozen in time, and giant switches and structures indicate that there is more to this world than meets the eye. To say more is to ruin the joy of discovery for you, but RiME keeps giving small morsels to chew on, and you adapt to your surroundings as they evolve from sunny beaches and cute warthogs to dangerous predatory birds and mechanical mysteries.

It’s not going to push your hardware to its limit, but RiME is consistently beautiful with a minimalist style and colour palette that benefits from cel-shading. Uncovering a gorgeous view of the landscape after scaling a tall ruinous tower left my jaw dropping in awe on a regular basis, as did the clever use of lighting to indicate puzzle clues but also allowed shadows to bounce off the rocks and trees.

The soundtrack is also simply stunning. As soon as the game began, I was instantly transported, with a score that is truly uplifting, spurring me on and making me genuinely emotional during points where nothing specifically emotional was even happening. That’s how good it is. It gave me serious feels, especially as it swept in during moments of genuine delight as I solved tricky puzzles. 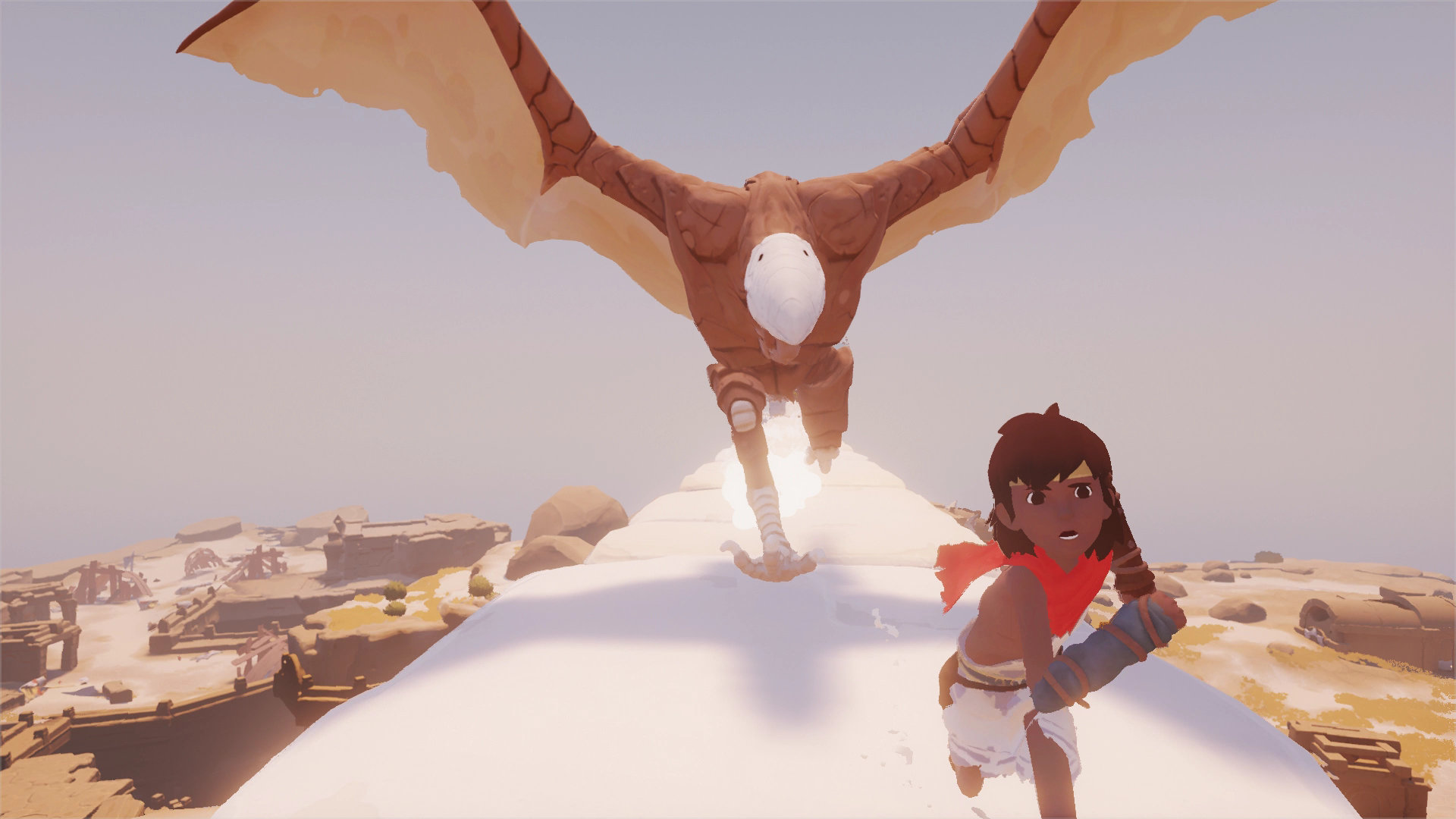 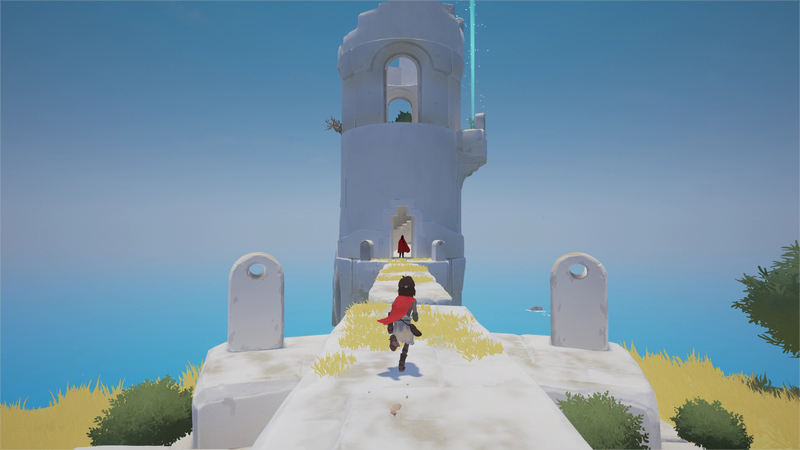 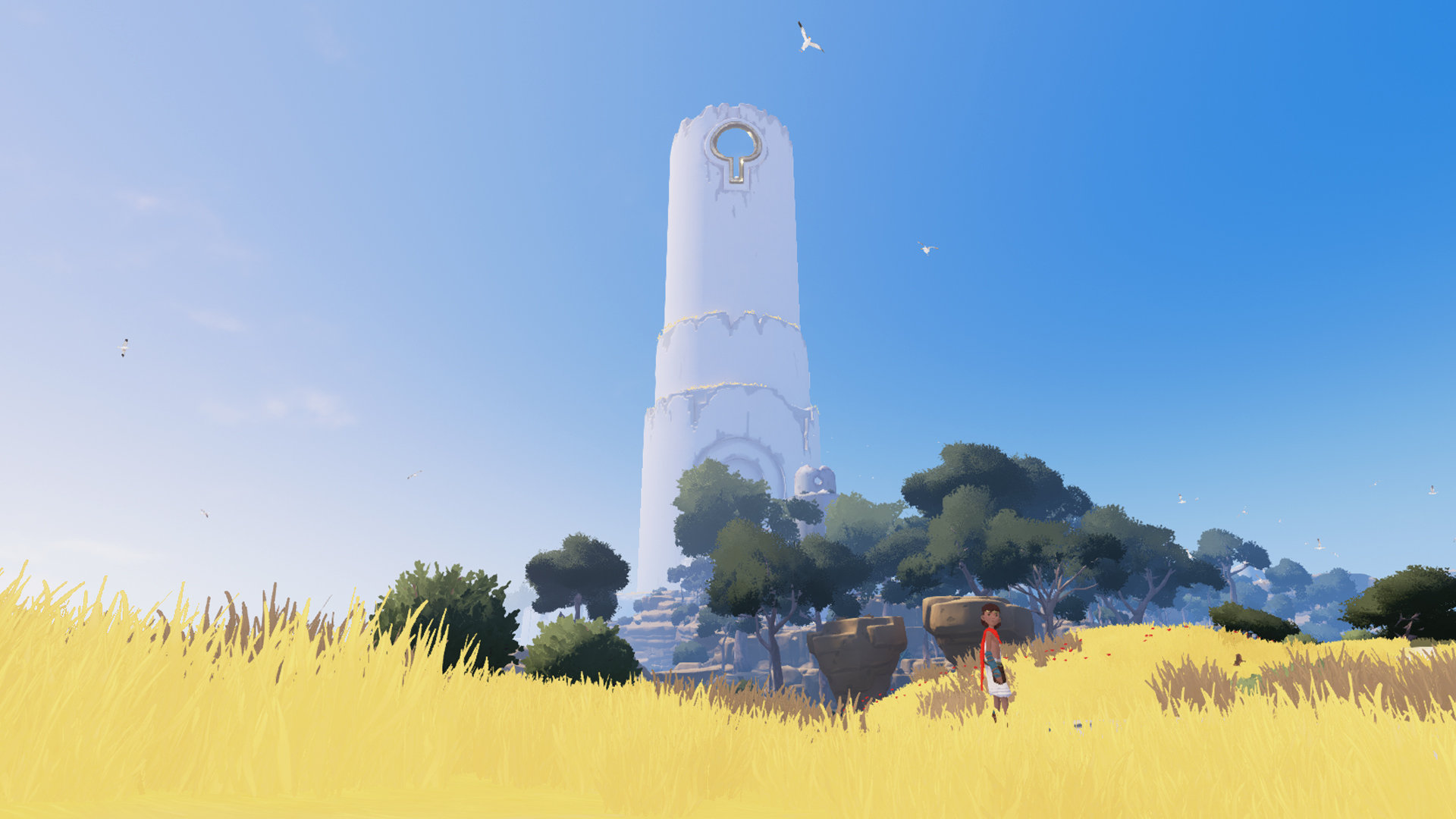 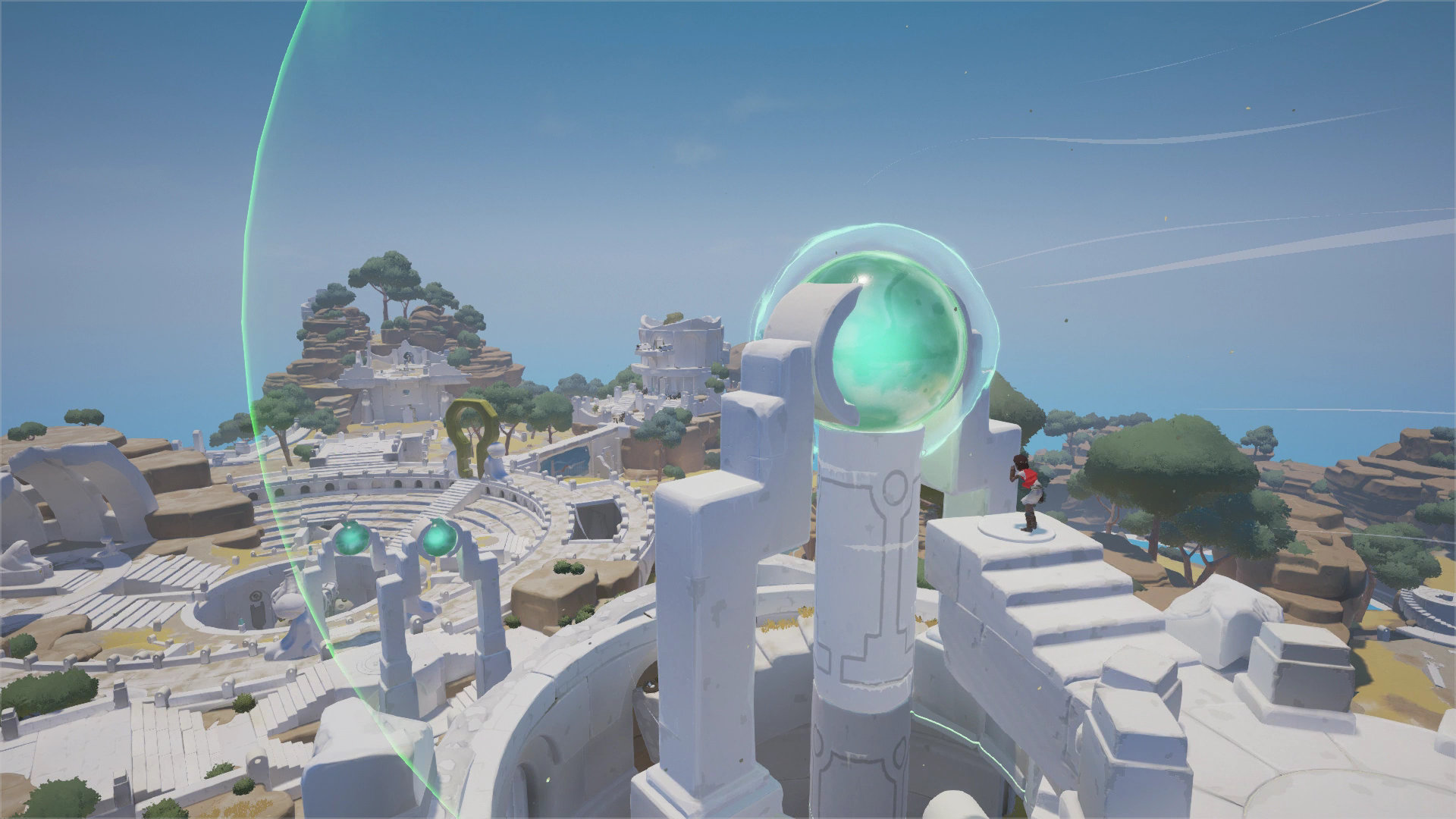 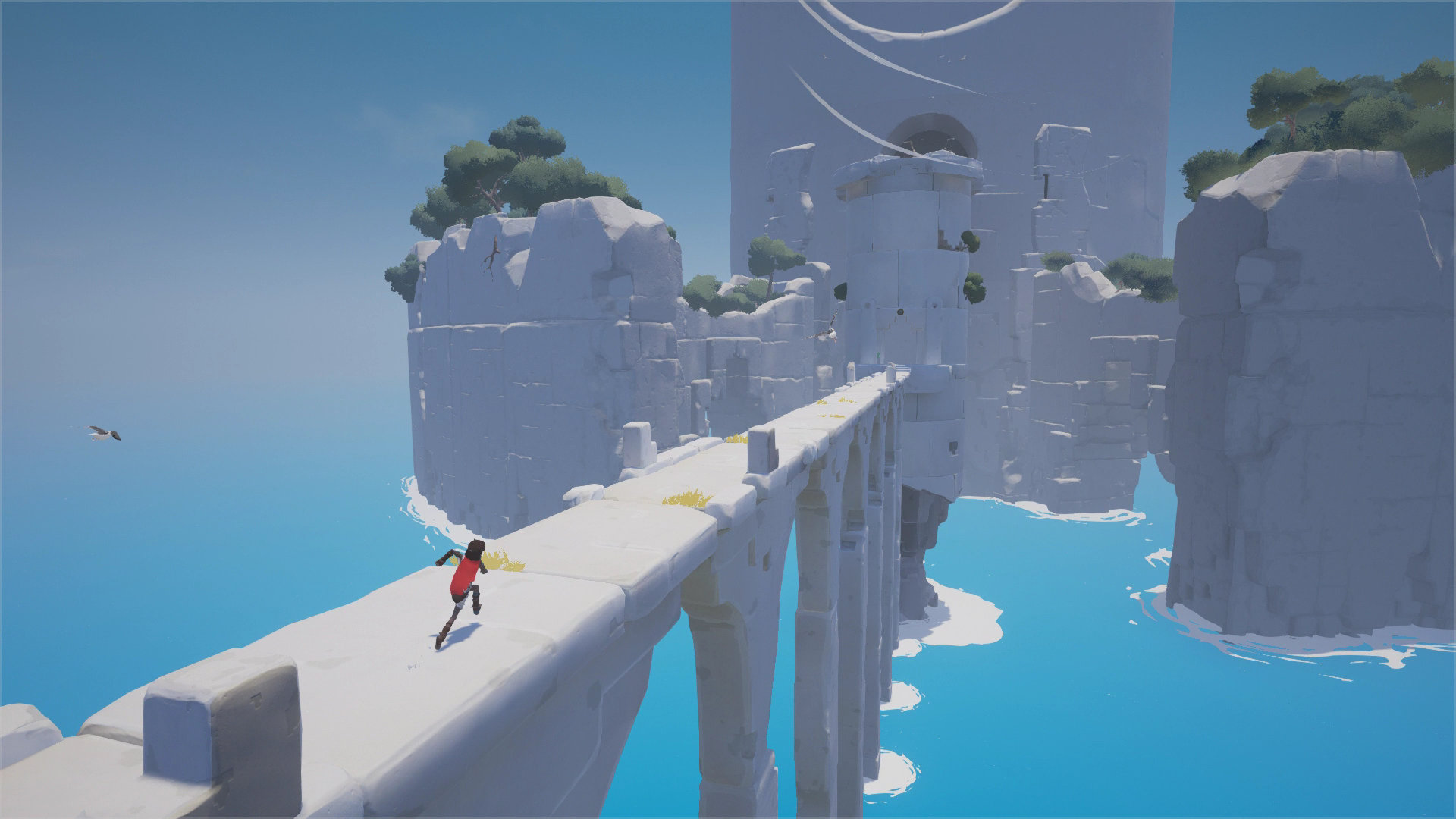 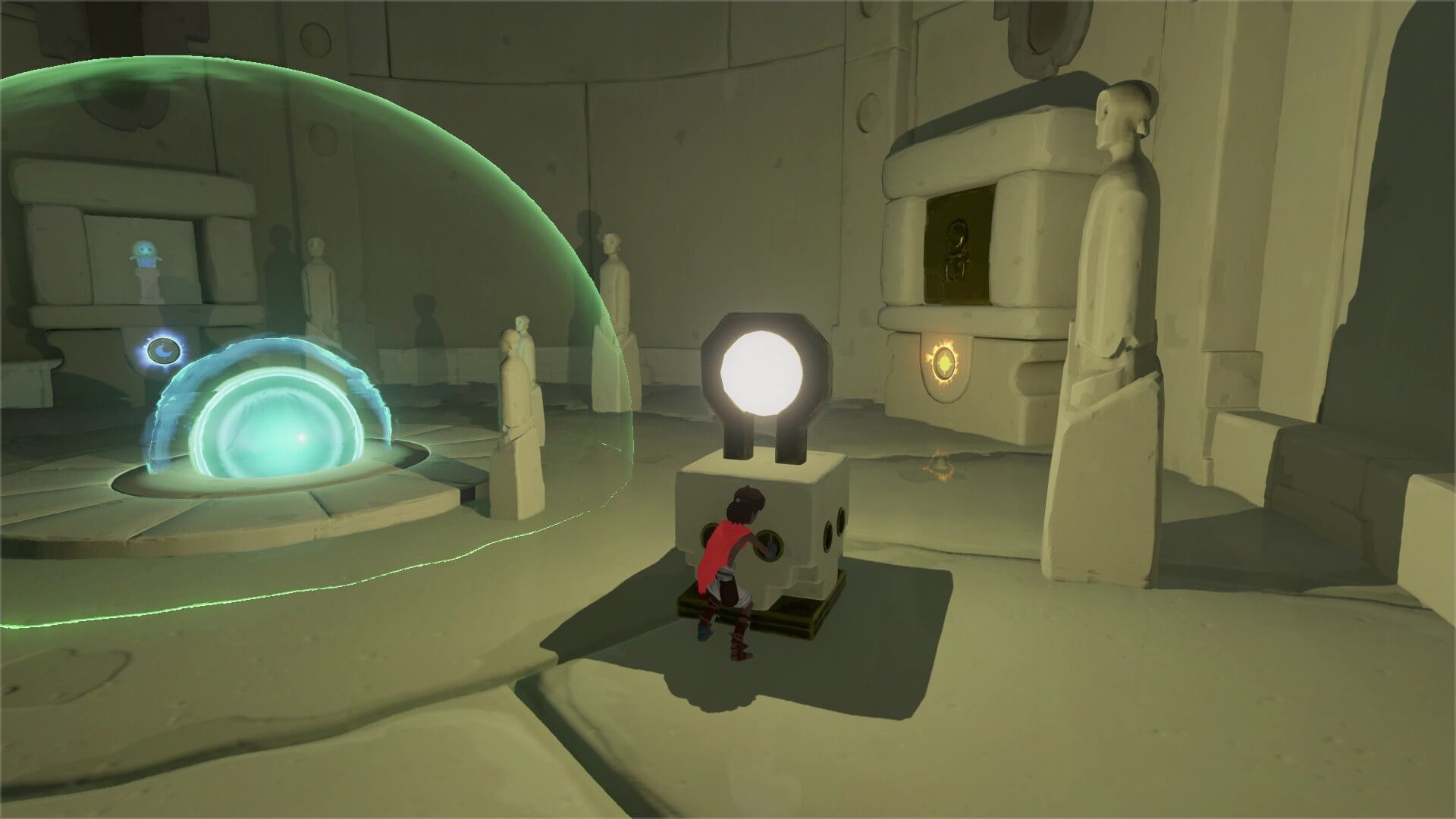 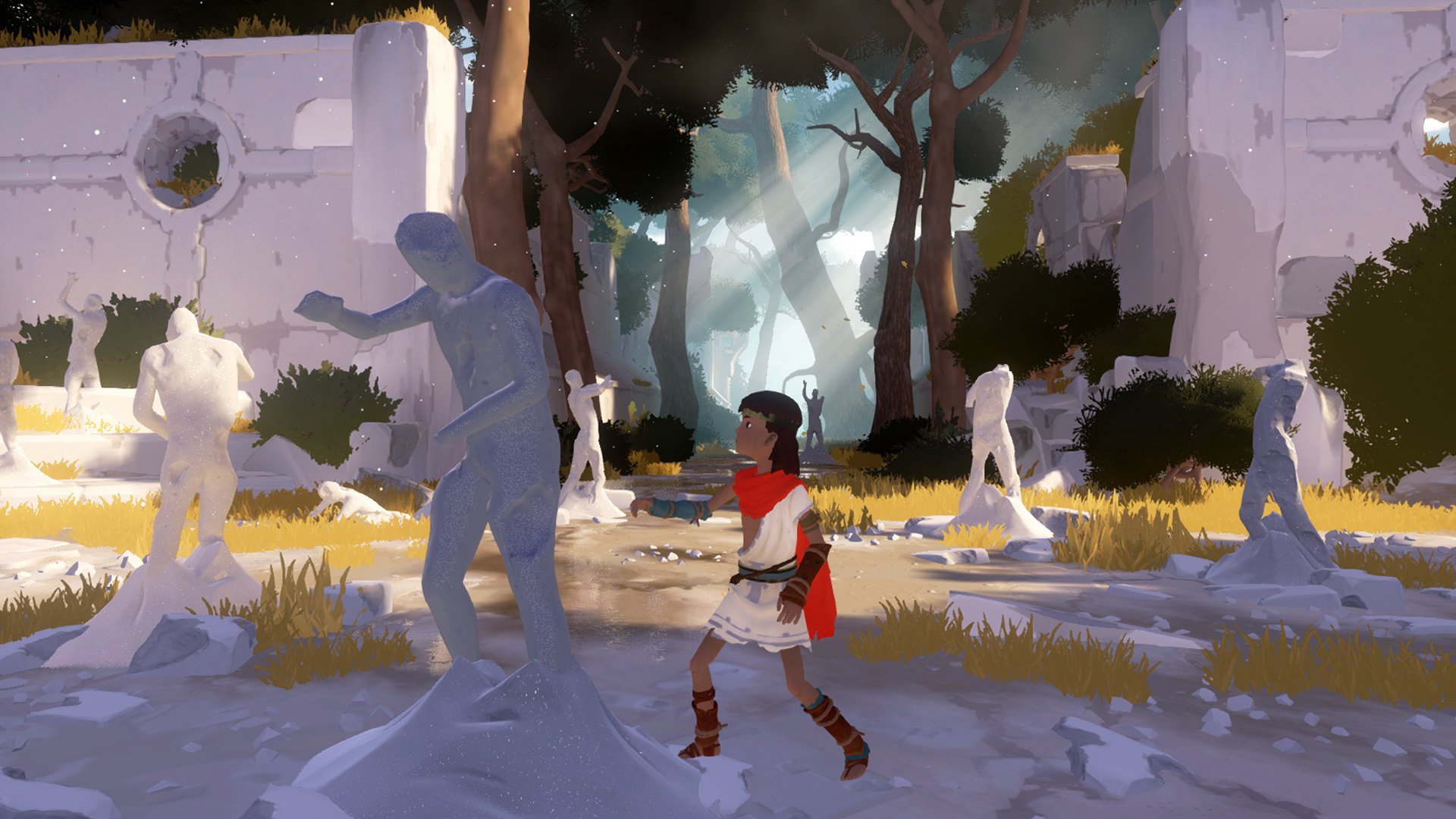 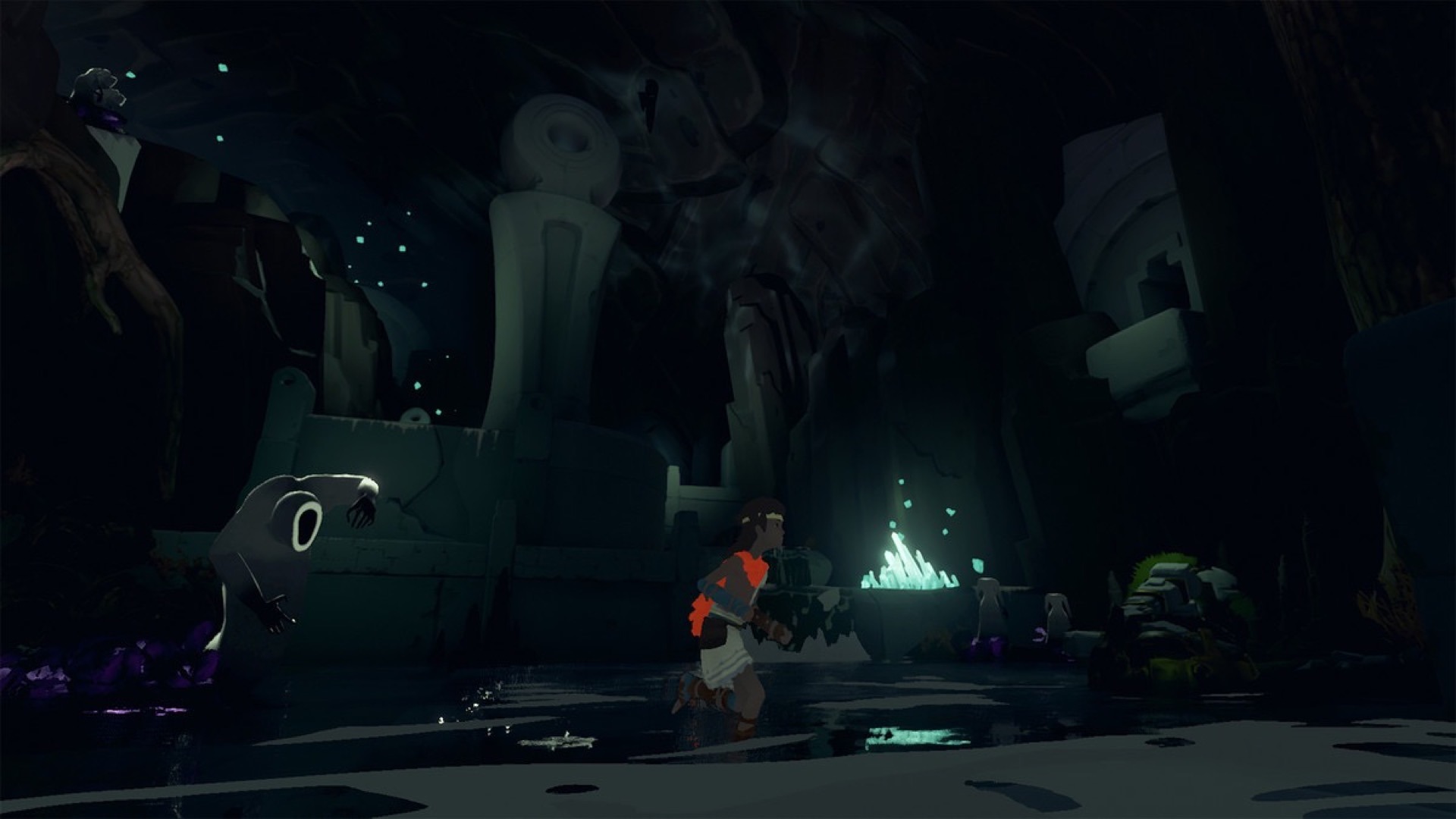 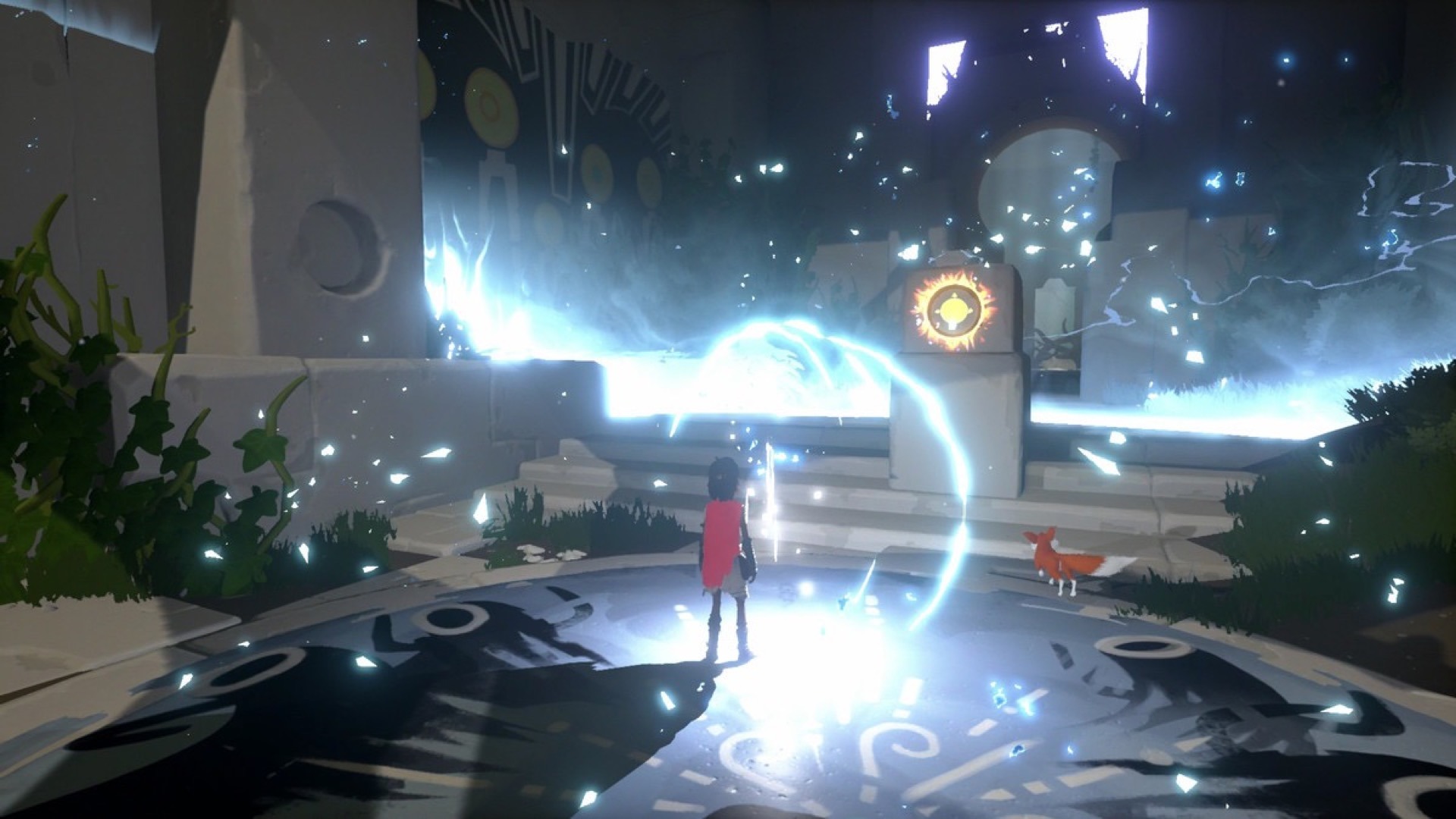 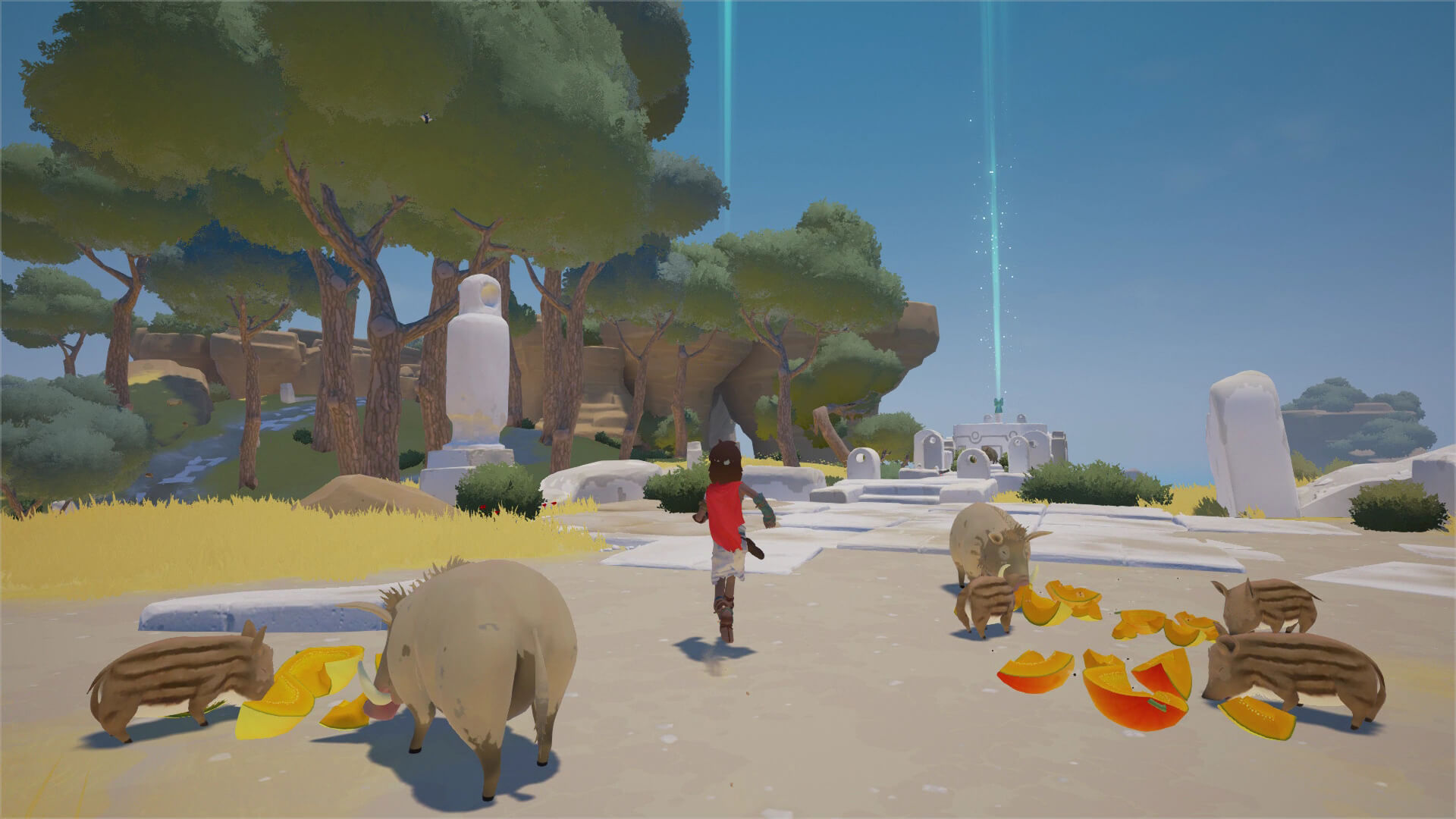 Traditional puzzles, such as leading a warthog around with food or collecting keys in hard to reach places are mixed in with more interesting visual puzzles, which get you to think about your visual perspective on things and manipulate the day/night cycle, for example. There are also some platforming elements, as you climb to areas and escalate tall structures, which all feel well balanced and appropriately weighty with every ledge you leap to. I never found anything overly difficult; perhaps I was stumped two or three times throughout, but there was a logic to most objectives that kept me from being frustrated or stuck for too long.

“It maintains its beauty, but threatens something potentially darker.”

There is no combat in RiME, but that’s not to say that there aren’t dangers and foes to be wary of. One memorable area has a giant bird that threatens to carry you away if you’re out in the open for too long, and shady characters are always seemingly watching over you in a creepy manner, threatening you merely by existing, causing concern when you get too close to them. For a game that has such uplifting highs and gorgeous aesthetics, it’s also fully capable of being moody and foreboding when called for. It maintains its beauty, but threatens something potentially darker.

The style reminded me of a mix between ICO and Journey; which I don’t say lightly, given that both ICO and Journey fall under the category of “all-time favourite experiences” in my book. There’s something about a video game that effectively leads you around using purely sight and sound that creates a genuine connection with the characters and the world you’re experiencing. It also makes progression feel all the more satisfying, and shows ingenuity from the developers in being able to craft a game that effectively tells its tale not with words, but with actions and environment.

RiME truly kept me hanging on with every new discovery, so much so that I couldn’t help but be disappointed when the credits began to roll after around 5-6 hours. It brings into question a conversation that I’ve had a lot recently regarding “value”. Do we judge a games worth by the time it takes to complete it, or is the way it emotionally resonates with us, the consumer, more important after all?

After finishing it and reflecting, I understand as a narrative why the game ended where it did, but I was enjoying myself so much that I was left craving more puzzles, more areas to explore and… well, just more. There are collectables to go back and find as I did miss a bunch of them, which extends the longevity somewhat, but knowing the solutions of each area is going to make that feel a bit like going through the motions, even though the overall production is something I certainly like the idea of experiencing more than once.

RiME is an enchanting game that regularly left me breathless. With its incredibly subtle story and simple but gorgeous style, I continued to be surprised and pleased by its hidden doorways, well-crafted level design and sweeping score. Looking from the perspective of the games child protagonist adds an even greater sense of wonderment and revelation in a world that is full of risk and uncertainty, but also full of happiness and discovery. I guess that’s what life is all about, and these are the feelings that RiME provides unwavering from its  optimistic opening all the way to its touching conclusion.