My excitement for ARMS (the Nintendo Switch’s new fighter and answer to the Wii’s Punch-Out!) has been pretty high since I was fortunate enough to attend the Nintendo Switch reveal earlier this year here in Melbourne. Getting to spend approximately 10 minutes with the game that evening, I was not only impressed, but also left with a desire to play more. Well now that desire has been fully satisfied and I can happily say that ARMS has hit me with its best shot!

ARMS is certainly one of the best games out at the moment for the Nintendo Switch. Not only is it an addictive fighter offering gamers the chance to beat up their friends for stealing that last slice of pizza, it also showcases the Switch’s Joy-Con motion controls in a way that brings new life into motion control gaming that hasn’t been seen since the early days of the Wii. But while the game was originally thought to be primarily played using the Joy-Con motion controls, it’s also playable without them. Even though it’s extremely fun in a group environment to play it this way, if you’re on your own or planning to play online, you’re going to want to put those Joy-Cons into the controller grip or pick up the pro controller for maximum control.

I would best describe ARMS as a wackier take on the basic boxing game premise Nintendo have done before. However, unlike most of its predecessors in this genre, ARMS is an exciting blend of skill and plain old fists of fury blindly springing forth in hopes of taking down your opponent. This might sound a bit ill-conceived or poorly thought out, but I can tell you now it’s clearly the work of an evil genius and incredibly fun.

With all this in mind, ARMS isn’t your traditional fighting game, the most obvious difference being the use of a 3D arena. Unlike most fighters where you’re locked into a 2D fighting style, ARMS takes full advantage of the stage. Combine this with the full range of motion on offer from its fighters and this elevates ARMS to something far more dynamic and wonderful.

Stepping into the world of ARMS, you’re instantly punched in the face (so to speak) with just how bright and peppy the game is. Its design, although simplistic, is charming, beautiful and full of personality. This is why I can’t help but wonder why there aren’t any Amiibo sets to come out for this game and work alongside it. It seems like such a lost opportunity not to combine the two and have in-game unlocks for the adorable and lovable characters.

Speaking of which, it’s those lovable characters that are one of my favourite things about the game. Without any backstory and with barely any effort, Nintendo have managed to create characters so endearing that you will be picking favourites right from the get-go. There are 10 fighters to choose from, each with their own special ability, and each can be customised with a collection of distinct ARMS able to be unlocked by earning coins. They also all have their own special customised arenas as a home base, complete with fans, some of whom dress like crazed football fanatics, in the colours and costumes of their favourite fighter. It’s little details like this that show just how much effort Nintendo have put into this game and why it’s so instantly memorable.

“…full of personality, with characters so endearing that you will be picking favourites right from the get-go.”

The core game in ARMS is its Grand Prix Mode which for all intents and purposes is the single player part of the game. Having you choose a fighter and then playing through 10 matches in a row to become champion is a great introduction to the game and an absolute hoot. You’ll be rewarded with coins for winning each fight and once you have 30 coins you’ll be able to unlock additional ARMS.

This “Coins for ARMS” system would have to be my only gripe with the game. Using your coins to buy time increments to play a mini-game where you punch targets to randomly win new ARMS or possibly the same ARMS you’ve previously unlocked is annoying at best.

The Grand Prix Mode helps to familiarise yourself with the concept of choosing the right arm for the fight. As I mentioned before, each fighter has an assortment of different ARMS on offer for customisation. There’s 7 arm attributes in total: Fire, Ice, Wind, Stun, Electricity, Explosion and Blind. These will have you feeling like a certain feisty air bender. Choosing your ARMS wisely is super important, as the right combination can make all the difference in battle, given you can mix and match your ARMS  with varying results. 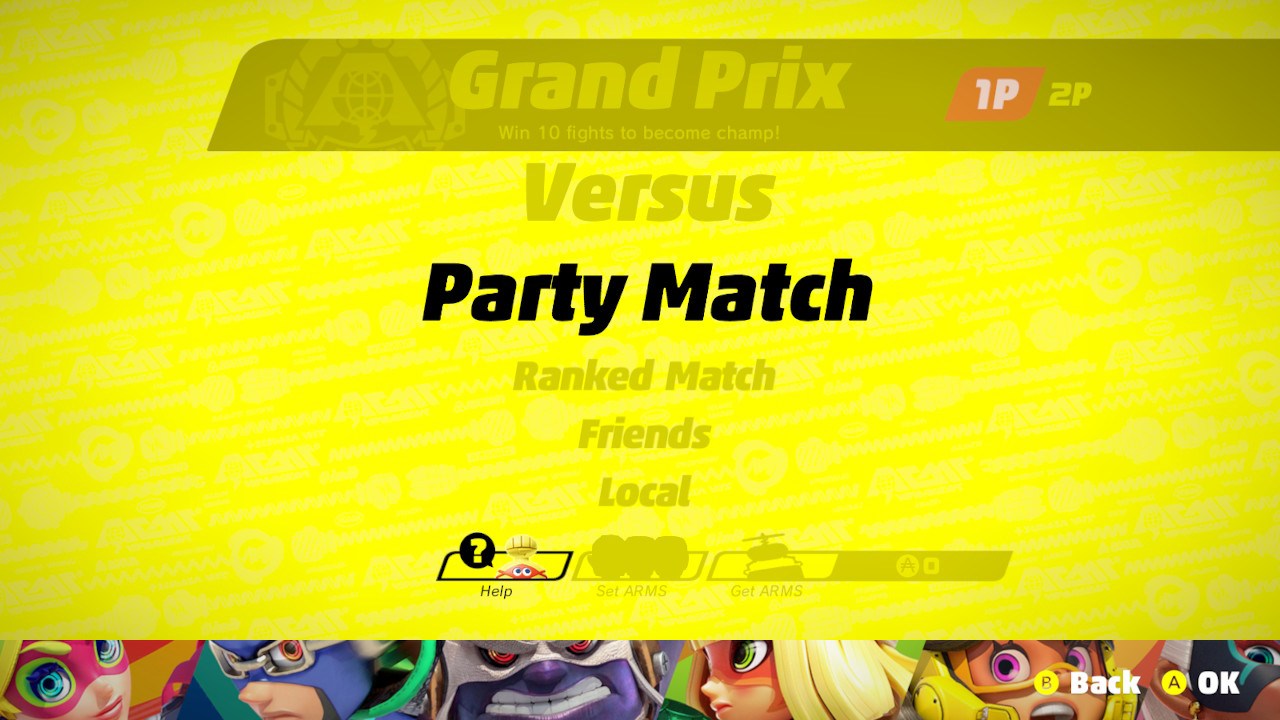 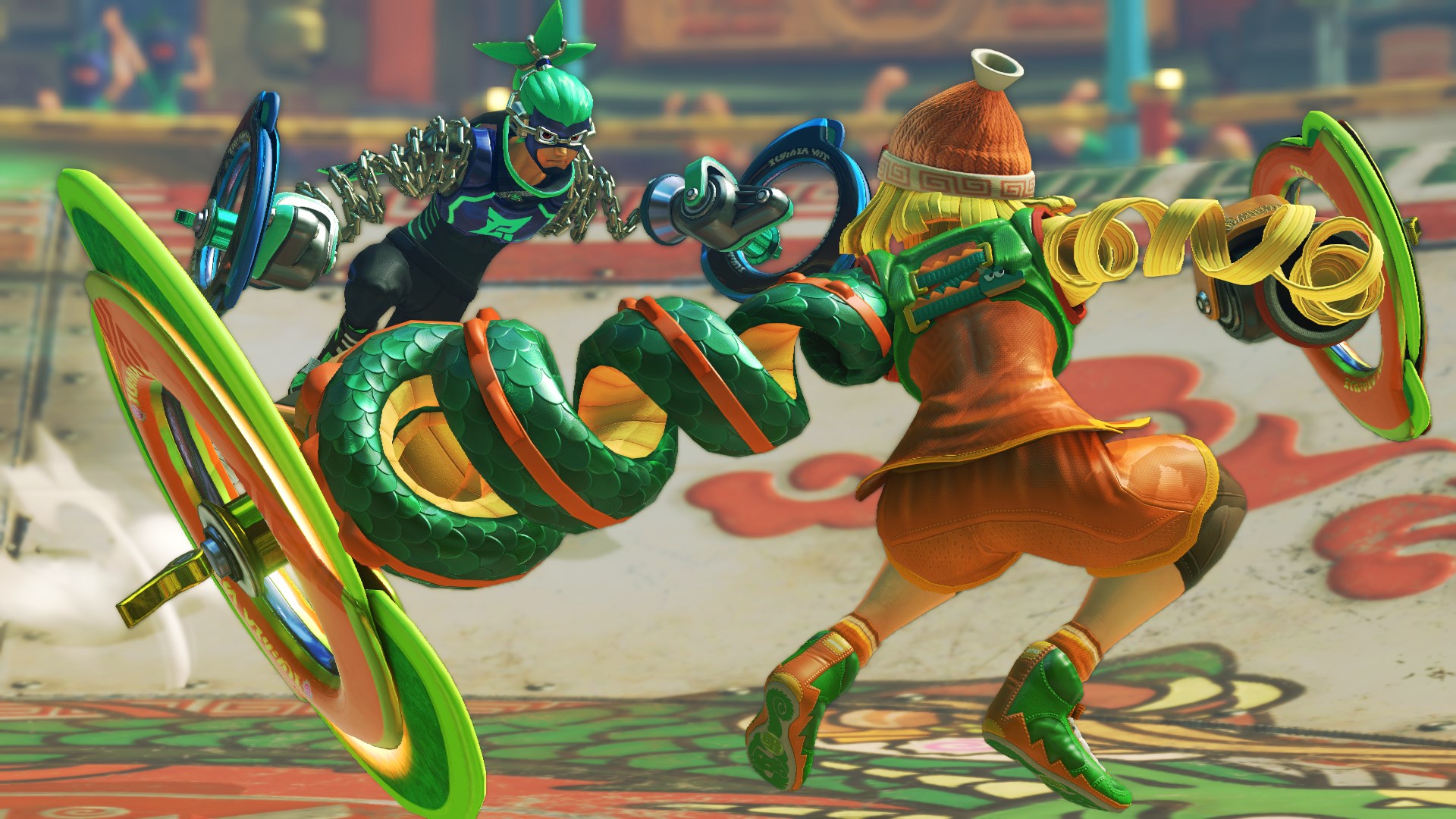 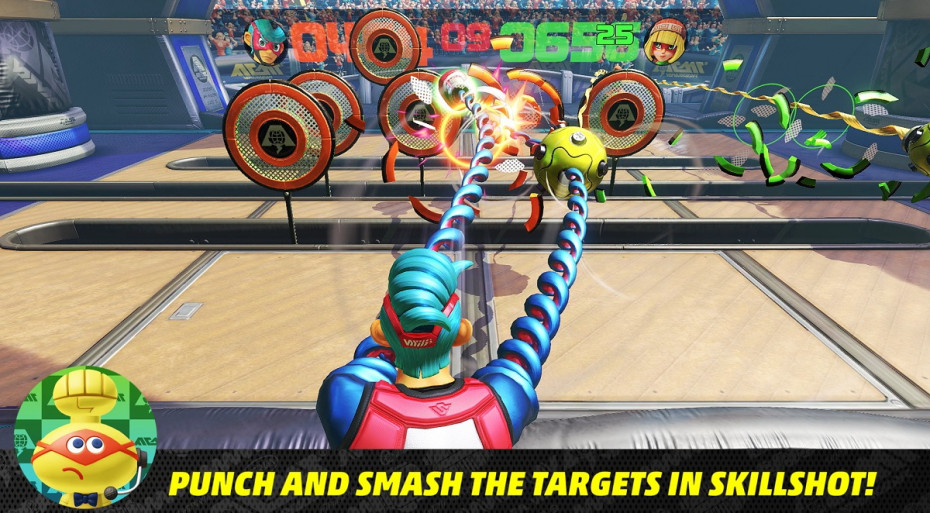 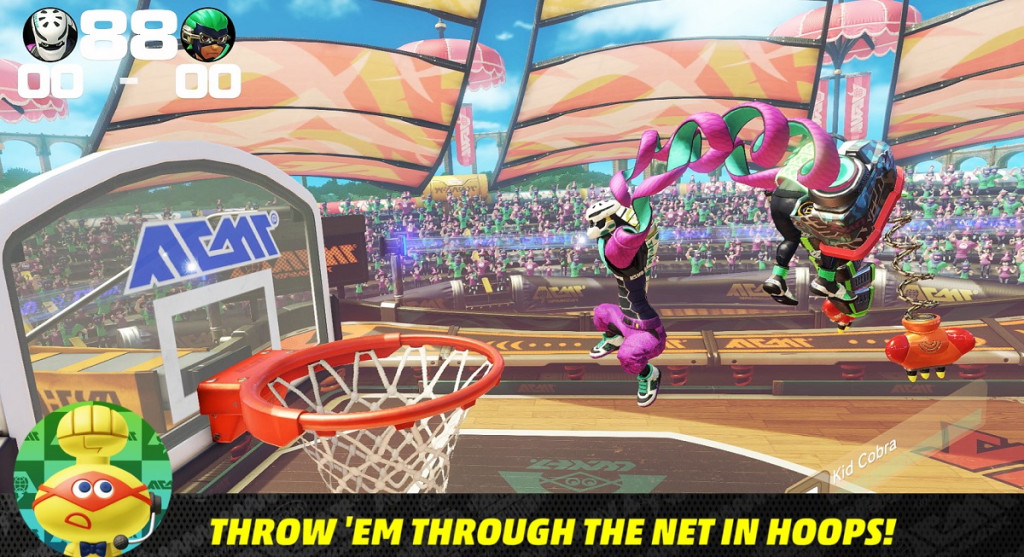 ARMS may seem to be a bit short in the single player department, but thankfully it more than makes up for it with its bounty of other game types on offer. Featuring a mix of some truly unique and creative game modes, it’s here where the game really wins my heart.

In VS Mode you’re gifted with a second menu offering a plethora of mini games to choose from. These range from a survival style mode in 1-on-100 to more crazy and fun modes like V-Ball (basically volleyball with ARMS and bombs) or Hoops (I call it dunking with friends). All of these games can be played single player as well as multiplayer which really expands on the whole experience. Sadly, even with all this, after a few hours of play, ARMS can grow a bit repetitive – as you would expect from any fighting game.

ARMS however has one more trick up its sleeve. The online multiplayer is a stand out and definitely shows what Nintendo are capable of with their online network. With two online modes to choose from, Party Mode for casual fun, and Ranked for those looking to make every punch count – ARMS appears to have everything covered. Party Mode will see you fight your way through numerous battles and match types for more coins, and is able to accommodate up to 20 players at any one time. Once you’ve finished playing around with the game in single player mode, Party Mode is where you’re going to be spending the majority of your time.

Ranked play however isn’t something you can just skip into. To take part in a ranked match you must complete the Grand Prix section of the game on difficulty 4 or higher. While this doesn’t sound that bad, it’s actually surprisingly hard and will see only the strongest competitors and more skilled players making use of the ranked feature.

ARMS is two entirely different games rolled in one. When played with the Switch’s Joy-Con motion controls, ARMS is the cardio workout you never knew you needed. It’s also a hilariously fun and addictive fighter with cartoonish combat. Play it with the Joy-Cons docked or with a pro controller and it becomes a refined fighter with amazing online potential. It’s intoxicating and addictive and unlike anything I’ve played before, which is exciting this early into the Nintendo Switch’s gaming line-up. I do have some concerns over the longevity of ARMS down the track, but it’s still definitely a game worth having now. And with Nintendo’s promise to add new fighters, ARMS and stages as free DLC in the future, it’s one I’ll happily add to my party games alongside Mario Kart 8 Deluxe.