Let’s be honest from the very beginning here, you shan’t find me grand marshalling the next “We Love JRPG” parade. What I can’t deny though is that 9 years ago I played Valkyria Chronicles and was immediately enamoured to how truly charming it was. So I was quick to put my hand up to play the latest addition, a spinoff — Valkyria Revolution. Unfortunately though, it seems the charm can only stretch so far.

Valkyria Revolution presents itself as flashbacks told by a teacher to her younger student as she tells you the story that the history books won’t, as she points out every time you trigger a new chapter and she tells you “This is a true story”. Developers Media.Vision have decided to free themselves from the previous narratives by creating a new universe. Returning are the themes of European imperialism, the inevitable war that such expansions triggers and the walking night light super women that the series take their name from, Valkyria.

You play the emotionally stunted leader of the Anti-Valkyria Squad, Amleth, who is also part of secret cabal who orchestrated the war for a personal vendetta. Amleth is accompanied by, Ophelia, the princess of the repressed Jutland who has chosen to wear her very best white lolita dress to battle — how very tactical. Jutland has decided it is time to rise up against the Ruzhian Empire who have expanded aggressively and put Jutland into an economic embargo.

In the face of overwhelming odds Amleth takes his mismatch team into a variety of battles against the comedically vaudevillian evil Empire. However while Chronicles crafted endearing characters with a believable bond, Revolution has instead opted for a generator that will pump out one generic JRPG character after another.

All of the usual archetypes are here — the serious woman, the womanising man, the starry eyed boy, the perky girl who is oddly violent, so on and so forth. They must have all been absent on the day that secondary character traits were being given out. So it’s extremely lucky that we get to spend so much time sitting through the back and forth of these characters as the game is just seems to be one cutscene after another.

This is made worse by the fact that almost all the cutscenes are of characters standing in a circle talking to each other, quite often with camera on their back — don’t have to reanimate mouth movement for localisation if you can’t see the mouth! Rather than let good and organic story telling build the world we are instead treated to expositional dump after expositional dump. Why show me the story when you could tell me the story, aye?

Characters have lost the grounded feel they previously had with beliefs and convictions that gave depth to each one of them separately. Instead every character sounds like it was their first reading of the script and they had done all of their lines not just in seperate rooms but on other ends of the earth.

“You’ll forgive me as I weigh up the strategic flaw of a man with a buster sword squaring off against an enemy force armed with rifles.”

Gone are primary weapons based around armament of the Second World War and instead we are given the generic JRPG over-sized melee weapons. You’ll forgive me as I weigh up the strategic flaw of a man with a buster sword squaring off against an enemy force armed with rifles. However, this brings us to gameplay.

It feels terrible to keep bringing this back to its predecessor but Valkyria Chronicles had an amazing gameplay style. Watching your stamina decrease as you dashed to cover, unsure if you should risk pushing that little further so you could peek out and hit that one enemy you couldn’t see. Picking the right class to flank the bunker you couldn’t move past. The game was hard but never punishing.

Valkyria Revolution has instead opted for a hack-and-slash style real-time battle system. You are able to pause the action with a radial menu that offers you one of four elemental spells for your character, a gun or a grenade — both with very limited ammunition. Before starting the mission you select the four characters you’ll play as with different classes and elemental strengths. In the heat of battle you’ll be able to quickly switch between your teammates or opt to issue strategic commands when things really start getting difficult.

Unfortunately, you won’t need those strategic commands, as the parade of same same enemy units never posed a threat to me. They literally stand there taking the occasional pot shot as you walk up and wail on them with whichever ridiculously over-sized Anime weapon your character is brandishing. The occasional boss battles manages to stretch out a fight long enough to see the game the team thought they were making but then that passes and you’re thrust back into a poorly textured stage to trudge around looking for a challenge. 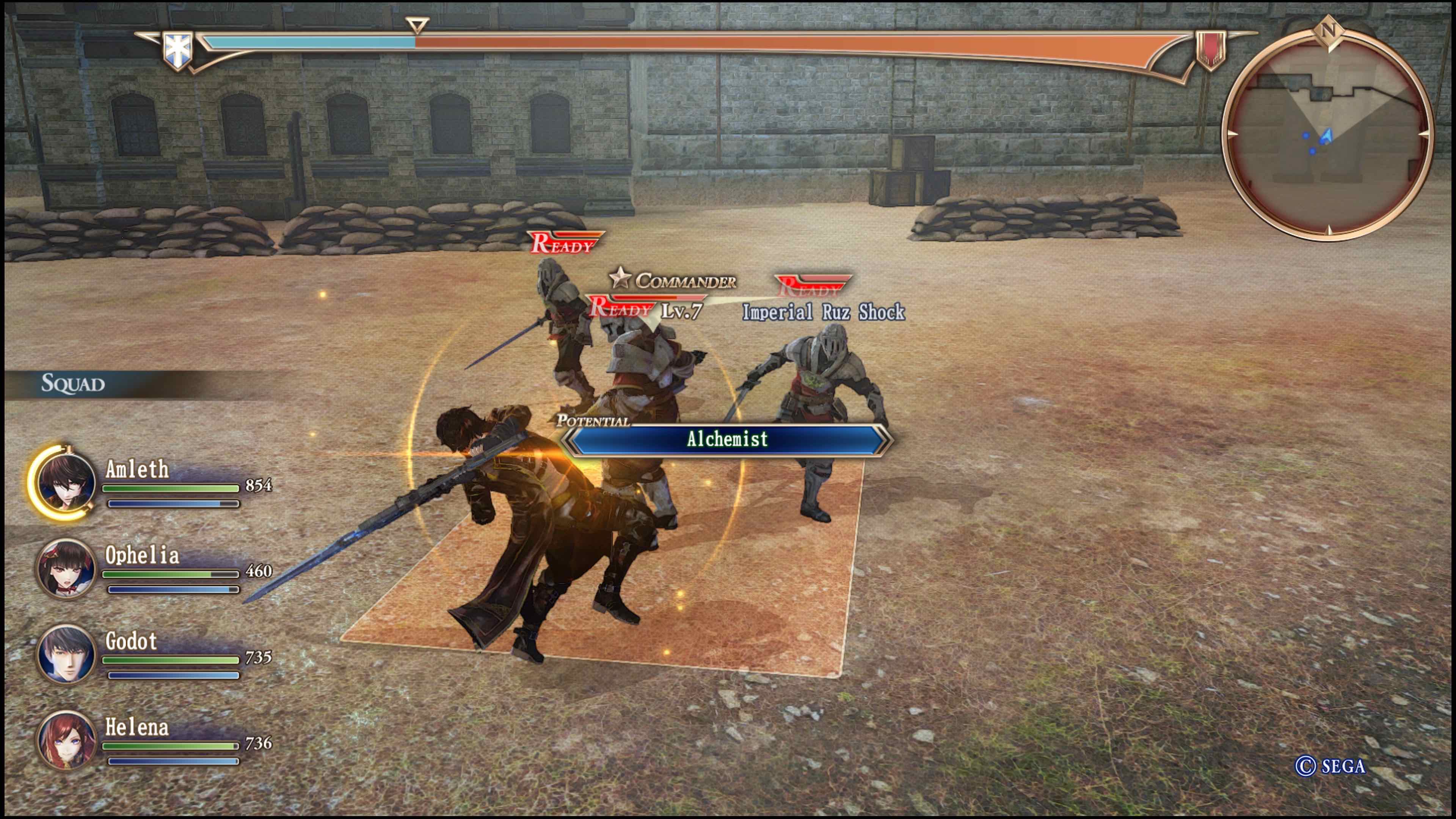 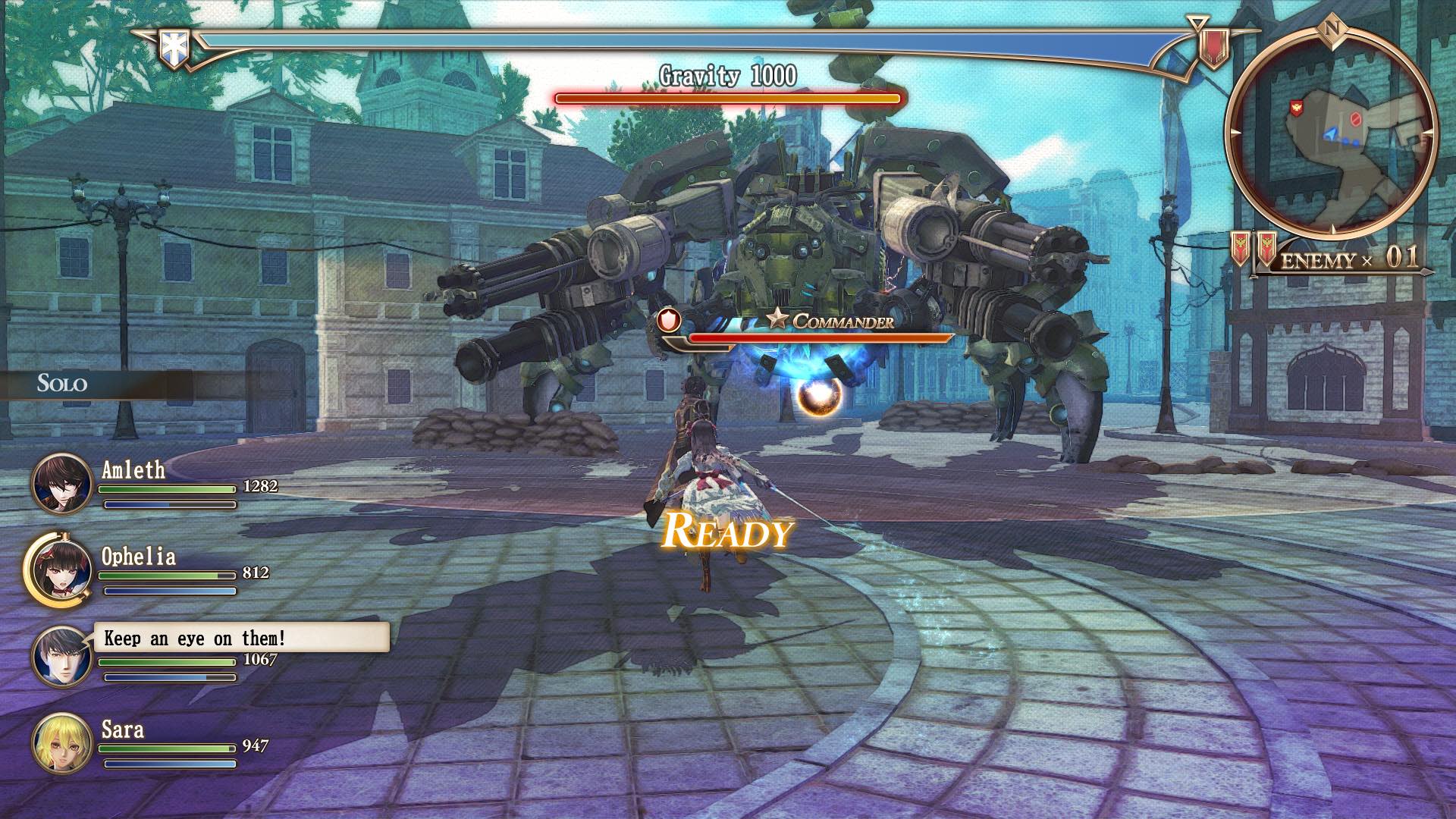 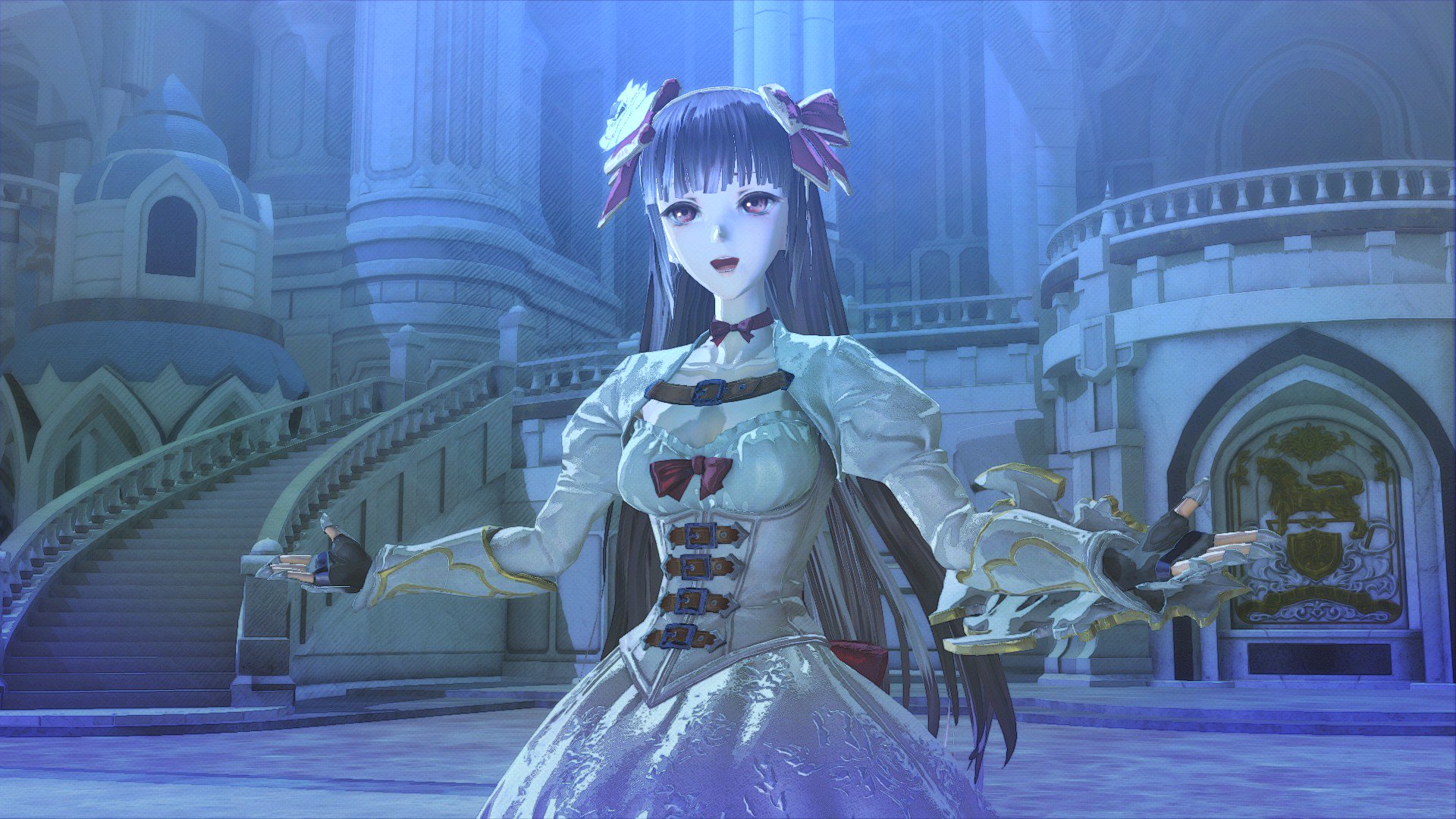 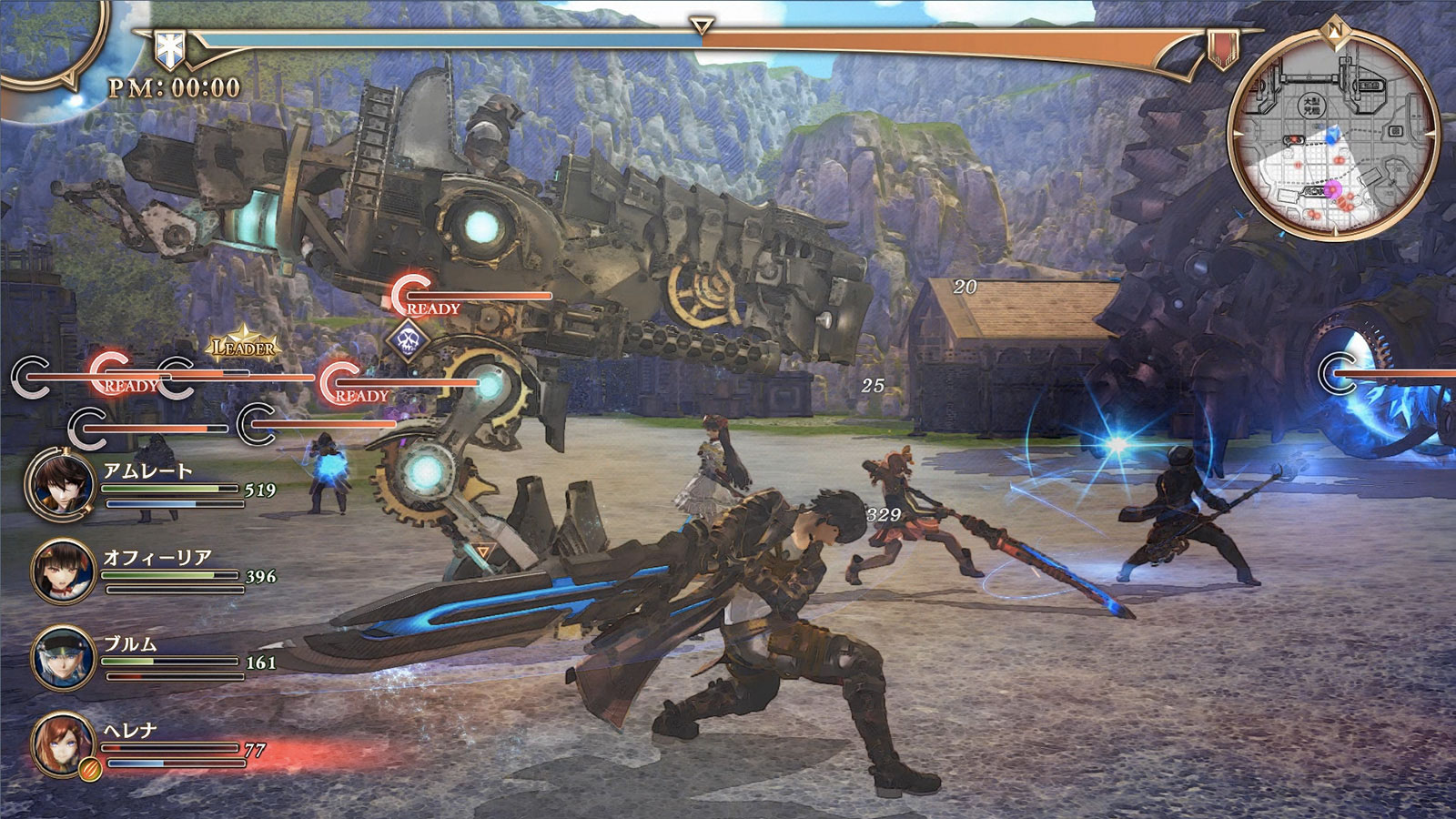 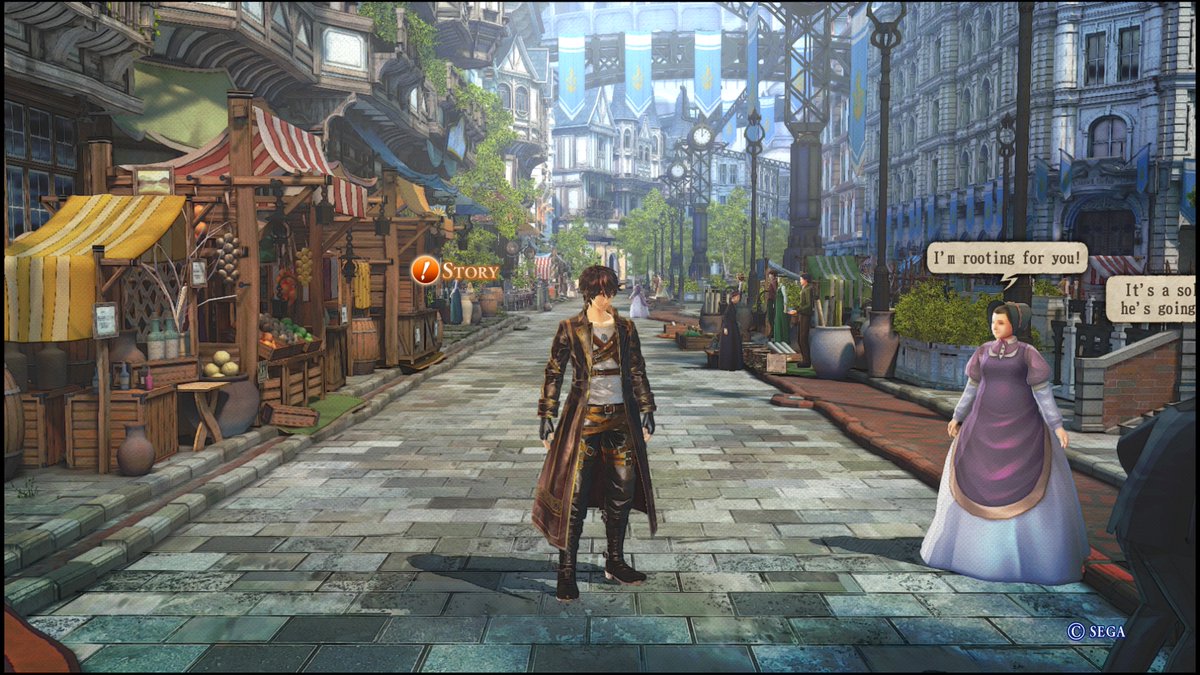 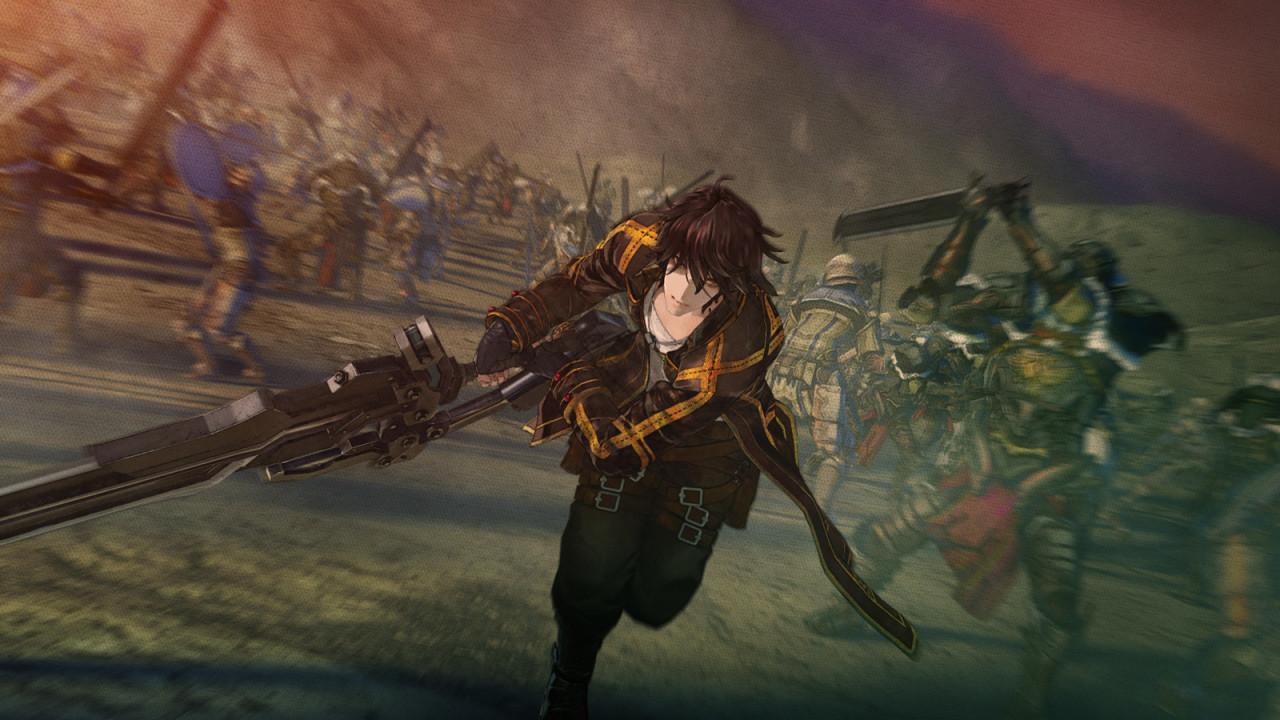 To break up the already minimal combat sections you’ll keep yourself entertained with the busy work of talking to locals in the same shopping arcade over and over to make sure they don’t hate you or the war — like that one really needy friend. Throw in RPG elements like skill trees and minor armor perk upgrades, all of which feel shallow and added merely to pad out a fairly bare-bones experience.

You’ll also get to visit previous chapters to read notes about the story, get familiar with the glossary or watch cutscenes that are essentially deleted scenes. Due to the amount of cutscenes I’d already sat through, I had come to the assumption that they had fired their editor and there couldn’t be any deleted scenes left to watch. Yet every time I opened a chapter I’d just played there was another scene of a side character going through a checklist of things to ruminate over; war, the Valkyria, how that one specific stuck-up hero will never have a love life… those kind of riveting plot points.

I played Valkyria Revolution on the PS4 and at first I hadn’t realised this was also a PS Vita title but it made a lot of sense after discovering this. While we’re always happy to see more games for the PS Vita, a handheld device that has been sorely forgotten by developers, the choice to make the title available for PS4 as well has highlighted how dated the game is. Environments are boring, character models are copy and paste jobs and the lovely canvas brush art style from the original comes across as muddy and under-utilised.

It is a genuine pity as I went in to this game with lots of excitement for an addition to the series and was rooting for it to wow me. However, instead of giving another gem that would find a cult following, if not a mainstream success, Valkyria Revolution has left us with another generic JRPG to become jetsam and flotsam in a sea of unoriginal ideas, boring gameplay mechanics and forgettable characters.