If Overwatch was a tabletop racing game, it might look a bit like Micro Machines World Series. It’s almost as if Micro Machines, as a franchise, woke up from a coma and was greeted with “its 2017 now, you need lootboxes… and skins, voice lines, and an ultimate ability that charges over time”. I know this is a negative way to kick off the review, but throughout my time with Micro Machines: World Series, I couldn’t help but think the game should have stayed true to itself rather than try and fit in with the “cool kids”. Nevertheless, Micro Machines World Series scores a few goals with some excellent co-op gameplay decisions.

Micro Machines: World Tour has the three essential game modes unlocked from the beginning: Race, Battle, and Elimination. Once you reach level 10, you can participate in Ranked Events where you can earn rewards at the end of the competitive seasons, and from time-to-time there are Special Events; a timed event where different rules are applied to the game modes, such as mystery vehicles every time you respawn. Additionally, there is the local multiplayer Skirmish mode, which is a real party-pleaser and is the mode that will have me coming back for more when I’m cracking a cold one with the boys. Skirmish is essentially a canvas for you to play around with the game’s three modes whilst enjoying some same-sofa multiplayer fun with some friends, a very enjoyable reminder of days-gone-by.

The game forgoes a single player championship mode in lieu of a levelling system that has become all too familiar: earn XP from each event to unlock loot boxes containing cosmetic and other bland rewards. One thing I love most about racing games is the feeling of accomplishment of completing a career mode, and the absence of one here resulted in a strong lack of motivation to continue. Getting the next random paint job or title for my profile isn’t a gameplay hook I associate with racers, and feels like an attempt to be relevant in the current videogame landscape rather than a meaningful gameplay decision.

Battle mode feels the most fleshed out, with 12 different vehicles each starting with 3 base abilities, and one chargeable ultimate ability. The abilities range from offensive weapons like lasers, shotguns, and flamethrowers to support and defensive perks like radar beacons, healing beams, and barriers. The ultimate abilities add some real flavour to the table with black holes, tornadoes, and snowmen wreaking havoc on the battlefield. The frantic 6v6 action across the 3 game-types, Capture the Flag, King of the Hill and Bomb Delivery, was truly enjoyable and is the standout feature of the game.

The most frustrating and punishing gameplay mode, Elimination, sees you participate in a last-man-standing style event where you race until only one player remains, and then rinse-and-repeat until a player has enough points to cross the finish line depicted on top of the screen. What makes this mode so cruel is the free-form camera which doesn’t lock on to your vehicle like the other modes, leaving you severely handicapped if the competition breaks ahead of you.

“Disappointingly, some of the characters have fallen into some tasteless stereotypes, like the Latino-voiced muscle car ‘El Incendio’…”

The environments in which you are racing and battling are vibrantly colourful, and the vehicles are superbly detailed and varied. The vehicles themselves are the characters, with some clever puns such as the monster truck ‘Hank N. Stein’, ambulance ‘Dr. Mel Practice’, and GI Joe sentry tank ‘Cobra H.I.S.S’ (because it looks like a snake, get it?). Disappointingly, some of the characters have fallen into some tasteless stereotypes, like the Latino-voiced muscle car ‘El Incendio’, the futuristic Japenese ‘Yu Saiko’ (a computer whiz with a hacking ability – original) and the Russian tough-girl ‘Viktoriya Tennikost’ (complete with an ice axe, because Russians are always cold I guess?). Call me a stickler, but I feel like we’re past the point of using racial stereotypes in an attempt to show character diversity, and some of the offerings here had me rolling my eyes pretty hard.

The maps range from workshop benches complete with electric saws and angle grinders, kitchen benches with spilled milk and honey, and backyard gardens with hoses and lawn mowers. The standout track by far, for me personally at least, is the Hungry Hippos map. Set around a giant game of Hungry Hippos, I really appreciated the clever inclusion of the Hasbro board game and the marbles rolling around made the action especially chaotic. Indeed, the hazards onscreen have a direct impact on the handling of your vehicle; drive over some milk and prepare to spin-out, or get caught in the lawn mower and watch your Micro Machine get blitzed. 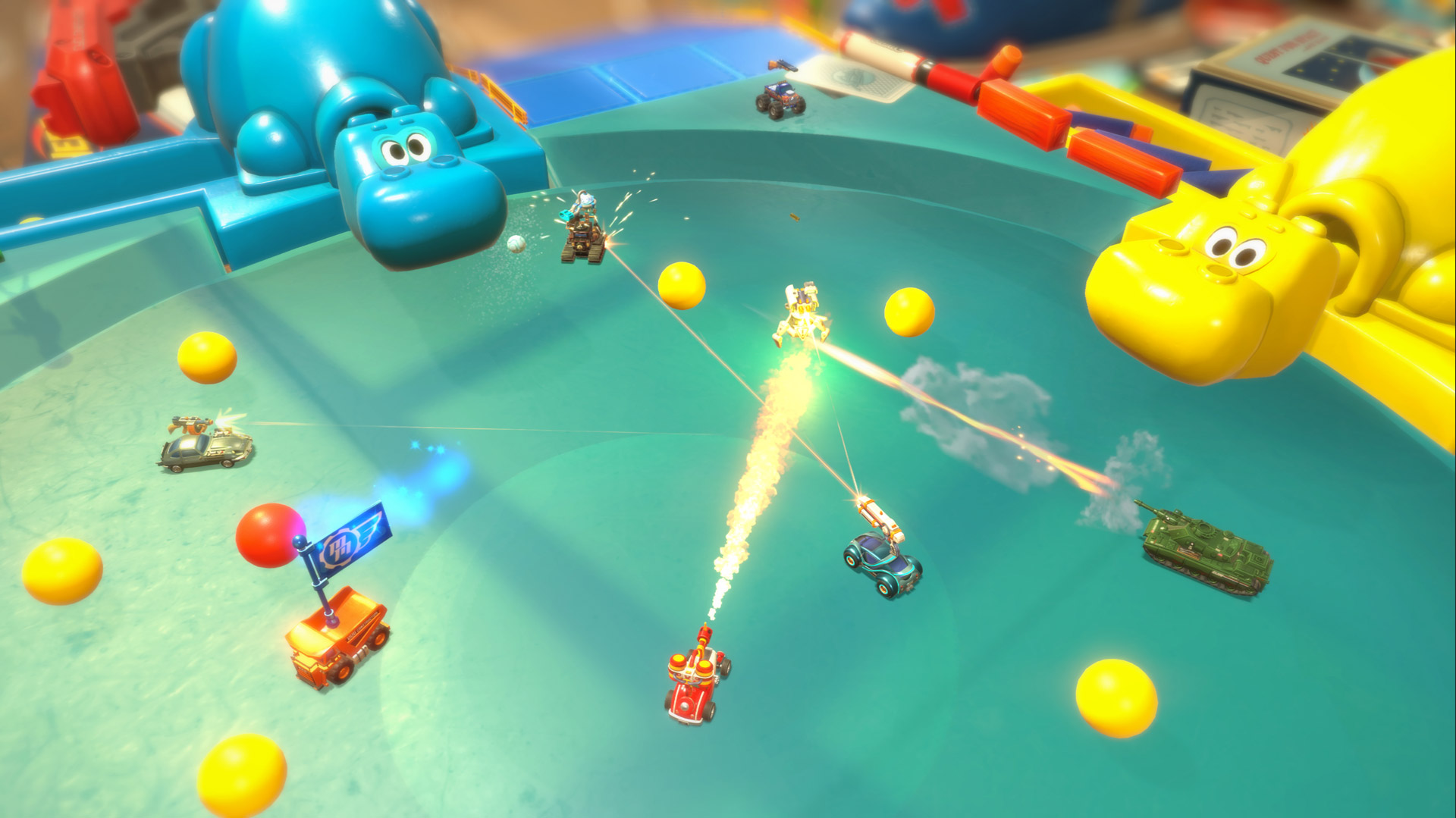 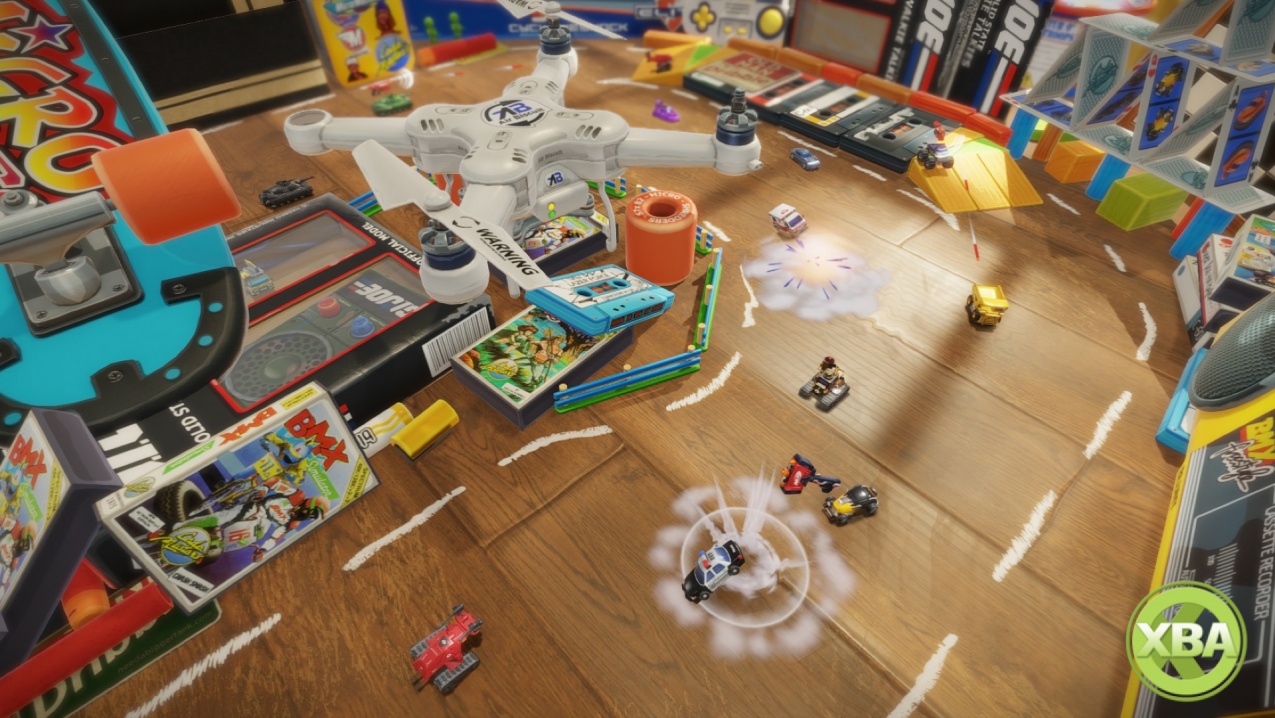 While each map has various hazards and roadblocks to navigate, by far the biggest danger is the floaty and slippery vehicles you are controlling. I appreciate a challenge in racers; I will even defend Mario Kart’s barrier-less Rainbow Road courses because they require proper skill, but this game is one of the most ruthless I’ve encountered when it comes to falling off the map. At almost every major turn on each map there is a very high chance you will either over or under-steer and fly straight off the edge. When you throw in mines that knock you every-which-way and 11 other vehicles careening around the same corner, you’ll soon get used to hearing your character’s screams of terror.

While Micro Machines World Series isn’t a complete failure, I can’t help but wonder if Codemasters have tried too hard to modernize their beloved franchise. The welcome addition of local co-op goes a long way, but the grind-focused gameplay, dull reward system, and overly floaty vehicles make World Series an unfortunate low-point in series.