Volition are at it again with their latest game, Agents of Mayhem. If you said the name Volition, most gamers would likely scream back at you “oh yeah, the people that made that Saints Row series of games.” Whilst the Saints Row franchise has definitely been a cash cow for Volition it never quite broke the stigma of being compared to GTA (Grand Theft Auto) no matter how many alien abductions and all-out parodies they might have tried.

Agents of Mayhem is an open world action-adventure game which loosely links onto the Saints Row universe and storyline. Let’s be honest here for a second, I’m not sure there are many of you out there that have actively followed Saints Row’s storyline in any kind of detail. I know I wasn’t following the story because I was too busy waving my double ended purple dildo in the air. But at any rate, here it goes. Agents Of Mayhem follows on from the ‘good ending’ of Saints Row IV’s expansion “Gat Out Of Hell.” Playing as members of MAYHEM (Multinational Agency Hunting Evil Masterminds) you are set the task of trying to thwart the plans of LEGION (League of Evil Gentlemen Intent on Obliterating Nations). With several plot and character crossovers from the Saints Row games, what could possibly go wrong?

Agents of Mayhem provides you answers to questions you probably never asked, such as… “What would it be like to play a single player campaign of Overwatch?” or… “What would all your favourite early 80’s and 90’s Saturday morning cartoon pop culture references smashed into a game look like?”

“To me it looked like a crazy theme park ride I just had to get on!”

It’s clear from the get go that it was heavily inspired by shows like G.I. Joe, M.A.S.K., and a whole range of other media from my early childhood, and I’m extremely OK with this. The games design and cartoon-like art style combined with its animated cut scenes help sell this concept particularly well.

And I’ll admit it now, I was on the hype train pretty early when this game was first announced. To me it looked like a crazy theme park ride I just had to get on!

Diving into the game there are a total of 12 playable characters or MAYHEM agents to choose from, with an additional 2 characters available as DLC. Each character has their own unique abilities which are suited to different situations. However, it’s not all lock and load right from the get-go because not all of the 12 characters are unlocked from the start. Instead you’ll need to complete the game’s missions relating to the locked agents to be able to summon them and add them to your team in the future. Along with your agents are a bunch of outfits and weapon skins which can be unlocked after completing various mission tasks or by finding chests located around the game map.

Every good hero needs a villain and the villains of our game are arguably just as lovable as our heroes. My two personal favourites would have to be August Gaunt, who’s clearly a play on Justin Bieber and has the ability to control people’s minds with his voice, and AISHA, an extremely vindictive, artificial intelligence, K-Pop singer with multiple personalities. What’s not to love here? But lets get back to our heroes shall we…

Your first introduction to the agents of MAYHEM is via the enigmatic trio of Fortune, Hardtack, and Hollywood, collectively known as Franchise Force. Kind of like the Avengers but with more copyright infringement lawsuits and superpowers than you can throw a stick at. Hot swapping between them you quickly come to grips with each character’s special abilities and unique play styles.

Tony Star… err I mean Hollywood for instance is a retired action movie star who had a slight mishap on set one day when he accidentally killed a co-worker. Seeing the potential for an intrepid front man, Hollywood was quickly recruited and now works for MAYHEM, still acting like the showboating ego-fueled action star he once was, keen to just blow everything up. 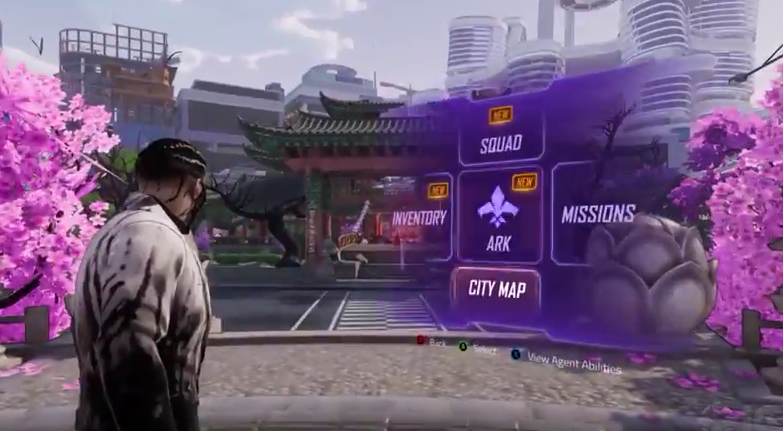 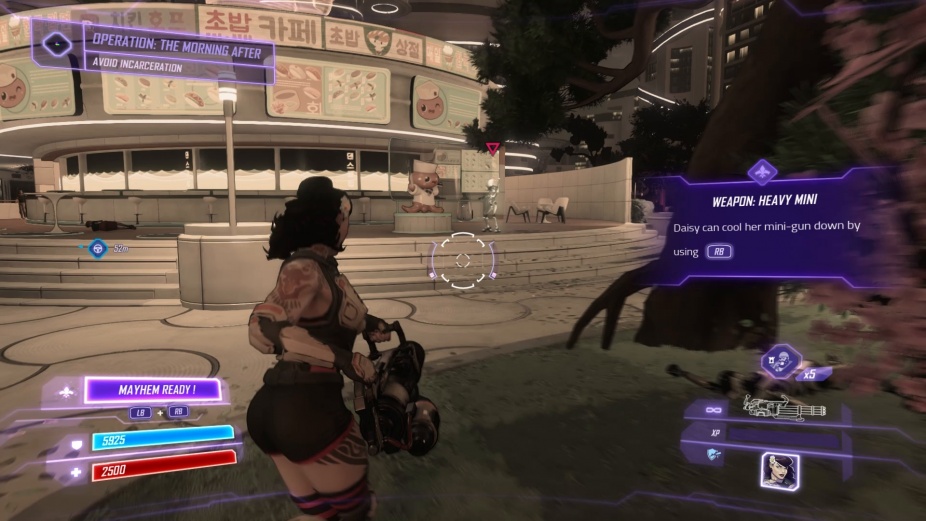 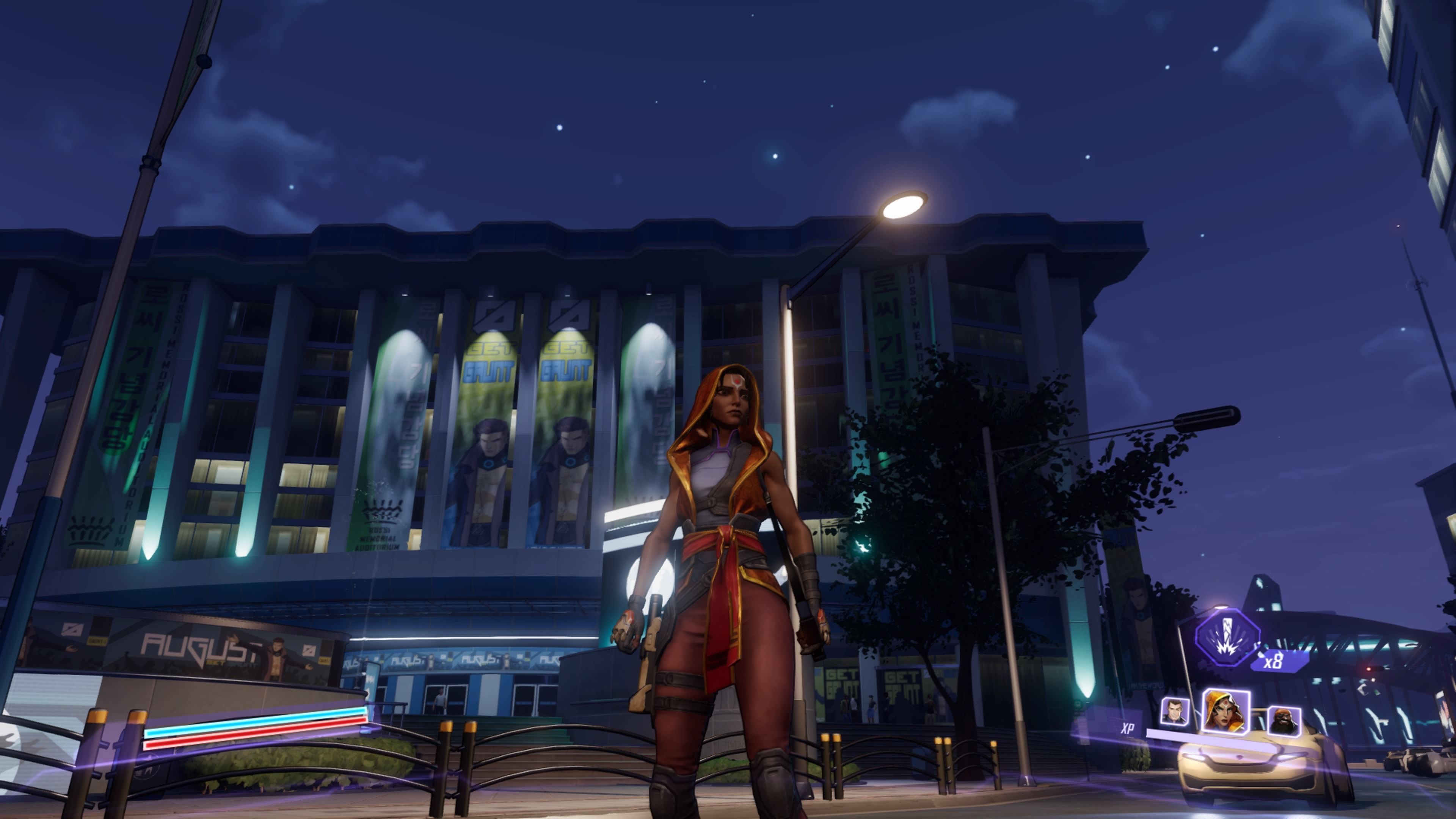 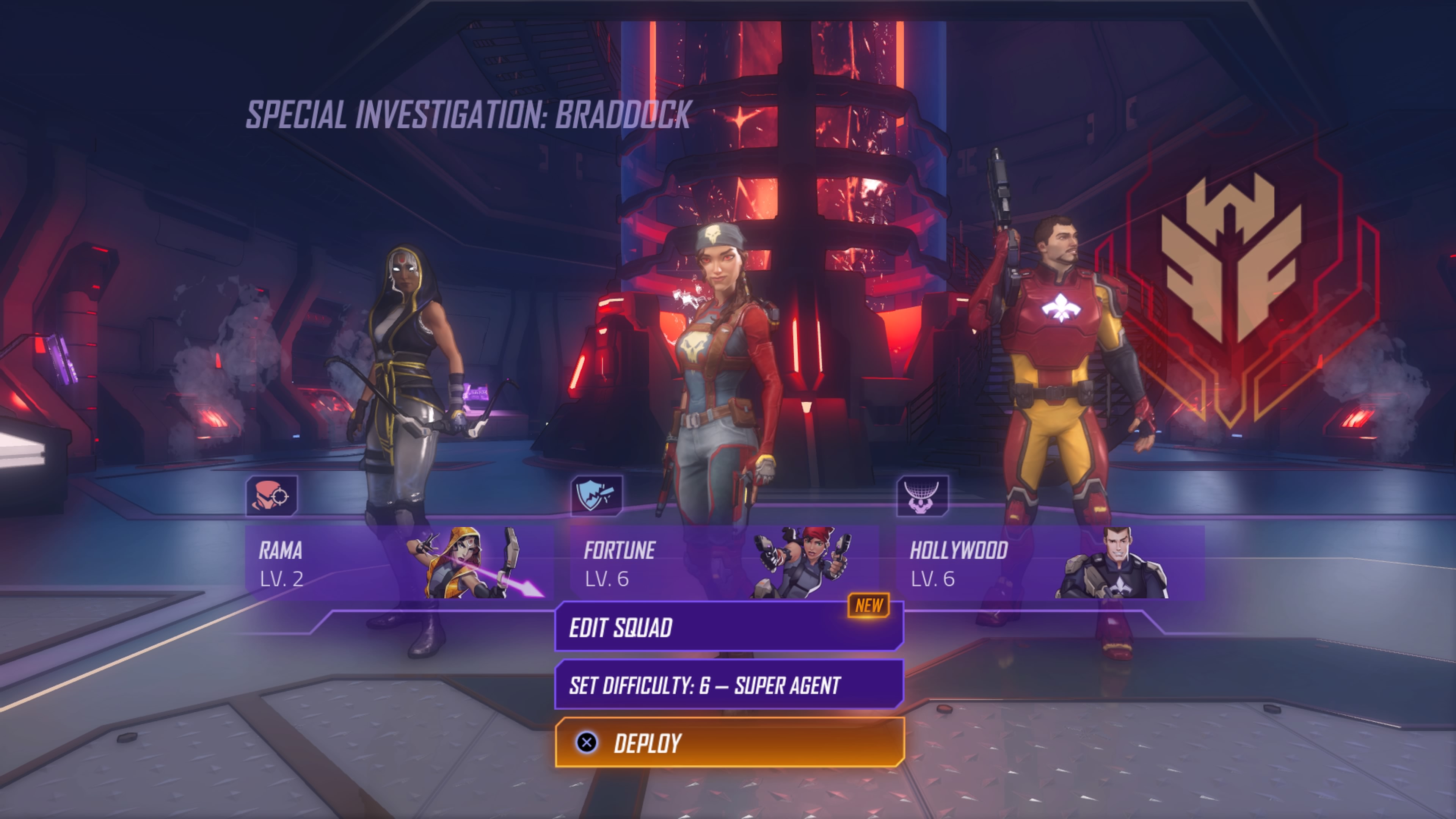 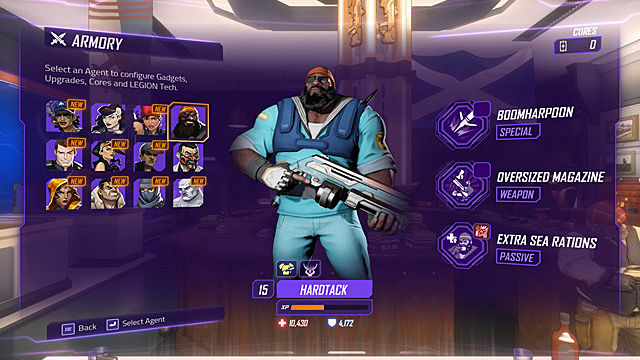 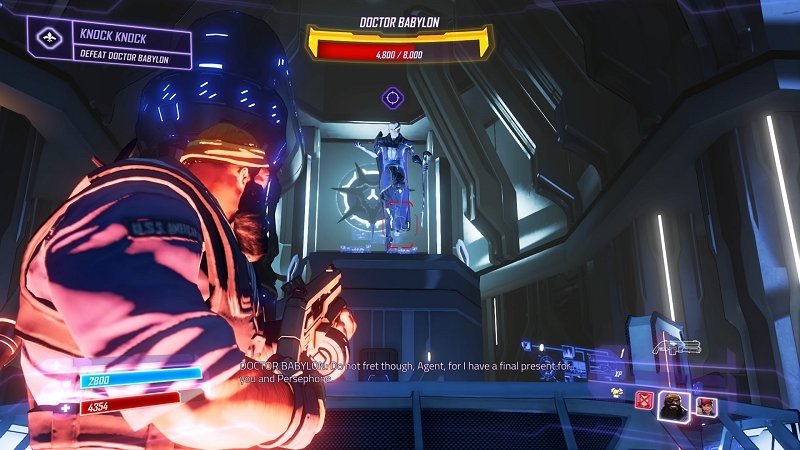 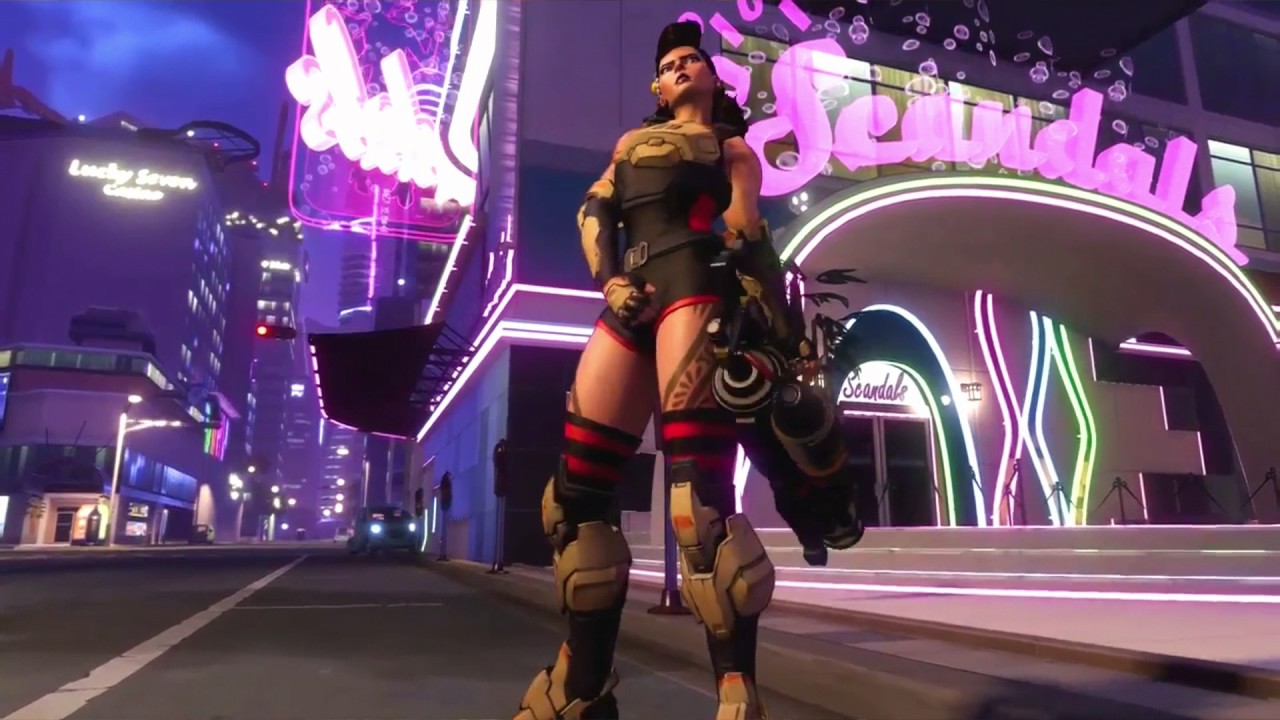 At its core, Agents of Mayhem is an open world game, so apart from the main story running at around 11-13 hours for completion, you’ll be offered up a bunch of side missions to fill the rest of your time with. This is where the game hits a bit of a snag though. Most parallel missions are just more killing (in the same places again and again) or extremely superfluous activities, such as destroying a LEGION vehicle or delivering a civilian car. There are also races to be done in the game, either on foot or by car but it all becomes very repetitive.

Everything can be done in numerous difficulty levels as well, with the higher difficulties offering better rewards, although rewards seem to have little use beyond what you can get from lower difficulties. Once you’ve set yourself up with a particular team there’s also no real incentive to switch between characters. Each agent has their own special abilities, strengths, weaknesses, and each character is leveled individually. With your party containing three agents which you can switch between at any time, once you find the ones you like best and work well with, it’s hard to find a reason to use any of the others beyond experimentation.

The background for all this explosive action is a futuristic Seoul, South Korea. It’s great to see a location that isn’t the obvious choice for once, particularly one that happens to be home to some of my absolute favourite things: K-Pop, Korean BBQ, K-Drama, the list goes on. Sadly Seoul is often overlooked by the developers here as a location and is more of a lifeless backdrop to the main event than anything else. The people of Seoul are basically collateral damage when you’re fighting the minions of LEGION and due to their everyday acceptance of the battles between the agents of MAYHEM and the LEGION, the city merely views this and other destruction that occurs throughout the game as a part of day-to-day life.

The city also suffers from a lack of locations being used. With such an expansive city on offer you’re unfortunately relegated to the same few locations time and time again when looking for LEGION lairs. This leaves a rather large portion of the city untouched by the player during main missions. There are a lot of randomly spawning challenges and side missions within the game (as is the way with most open world games) which use more of the map, although sadly these aren’t quite up to par either. Defeat one city-destroying target and you’ve essentially killed them all, leaving only minions for you to mow down in an endless buffet of carnage and loot pick ups.

An underutilised city and repetitive lairs can all be overlooked to some degree thanks to the game’s pop culture inspired brand of humour, but Agents of Mayhem is filled with little bugs that seem sloppy in this age of game development. On a few occasions I found myself stuck in an invisible floor or void only to have to reboot my game, losing all progress just to break free.

Driving offers some relief from this but not much. While your vehicle may be as cool as K.I.T from Knight Rider, you’re still able to glitch into a void if you boost too fast into the wrong spot.

Agents of Mayhem also offers you an amazing vehicle entry system, but that too is lacking or feels incomplete. Just call your car and stand in the designated circle for a cool, on-the-fly entry, saving you the effort of stopping to enter your car. Sounds great right? Except that as soon as you enter the car it comes to a complete stop anyway, thus making the whole thing feel rather pointless outside of a cool looking animation.

You’d be forgiven for thinking you were back in the 80’s while playing Agents of Mayhem. The game’s art style plays heavily into its pop culture parodies and its none too subtle throw back to the G.I. Joe, Knowing is half the battle! PSAs as you head back to the ARK are some of my favourite moments. This is all part of the charm that helps make the game both addictive, camp and playable long after its faults of repetitive hallways, game bugs and overused bad guys.

It’s a shame that such a promising game has to suffer through technical flaws and repetitive gameplay, but there’s definitely hope. The game hints at a continuation in the future which could be a great opportunity for Volition to learn from Agents of Mayhem, giving us a game that’s truly an unstoppable parodying force.