Scraping Bottom Games successfully met their $25,000 Kickstarter target to bring to us Fictorum, an action RPG said to be like no other. They also certainly set a task for themselves with a concept set to pique even the most jaded of gamer; a customisable and dynamic set of spell-casting tools which have the ability to destroy your environment.

Fictorum is a straight action RPG. You play a powerful wizard able to shape magic, stretching the limits of your power to unleash a destructive force against your enemies and surrounding environment. You are hunted by the Inquisition as the last standing Fictorum, and feared by all those around you. As the last of your kind, you fight to take vengeance against the Inquisition and anyone who stands in your path as you seek to avenge your fallen comrades.

As someone who pledged to the Kickstarter and had eagerly and patiently waited for access to play through the interesting concept and game features presented in Fictorum, I was almost instantly hit with a high level of disappointment when introduced to the main screen menu. It looks bland and slapped together, but I maintained hope when I found a character customisation feature.

You’re given the option to customise your character and select your wizard type (Tempest, Fire Brand, or Frost Bound).

There are a plethora of options to change the appearance of your character, but right from the get go my Fictorum didn’t seem legendary or powerful at all.  My character appeared more like a fresh character in an MMO game starting at level 1. This wouldn’t be an issue if Fictorum’s selling point wasn’t structured around being all legendary and powerful.

This broke the fantasy element for me right off the bat. I’m someone who quite likes knowing that my character is strong and thus likes making them look strong, so changing the colour of my skin and adding some facial hair doesn’t exactly scream “all mighty and powerful Fictorum”. At best it screamed “generic customisation feature goes here”. Ultimately the “legendary and strong” wizard storyline fell to the wayside very quickly.

Fictorum has a bland approach to presenting its story to you as well. You get an overview map of some mountains you have to traverse. To progress you click the next mountains, and use vague logic to work your way to the checkpoint on the map, proceeding to the next chapter/level. This is also the area where your character’s story is presented to you on a scroll. Initially I found it hard to get past this almost unimaginative approach to storytelling. But whilst these parts of Fictorum lack the AAA gaming feel, they stood out to me beyond the aesthetics because of how reminiscent it was of a Dungeons and Dragons gaming session. 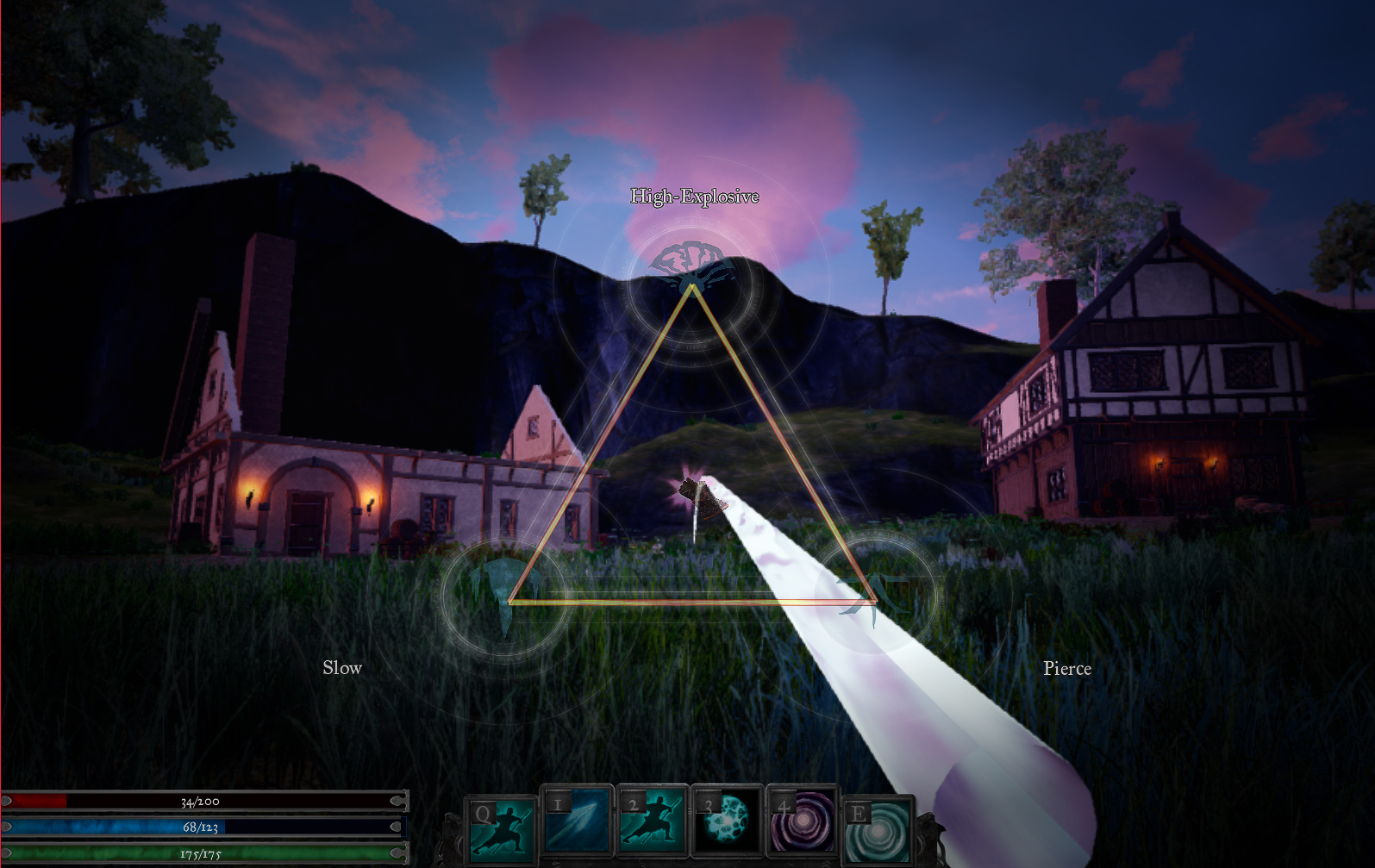 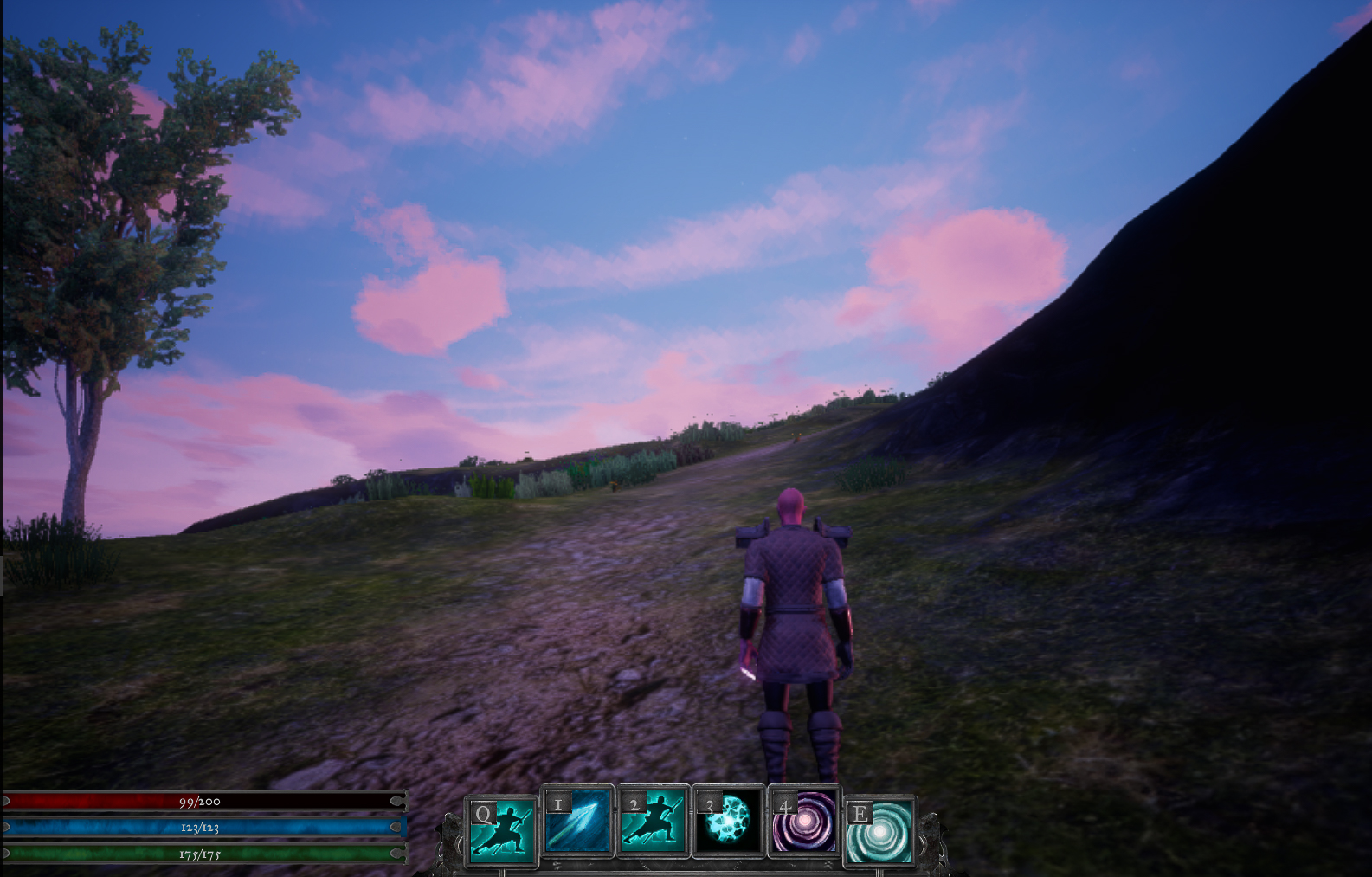 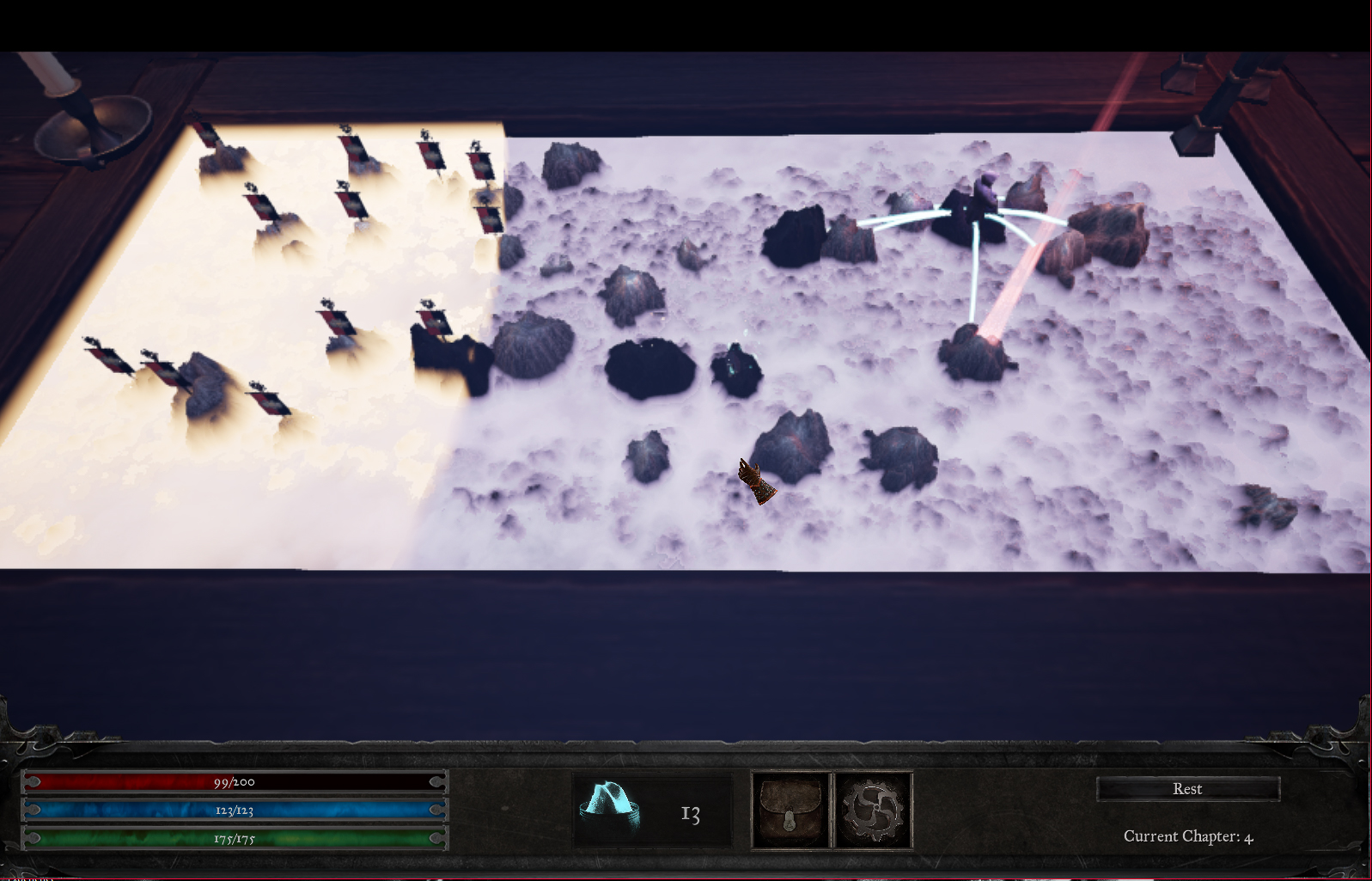 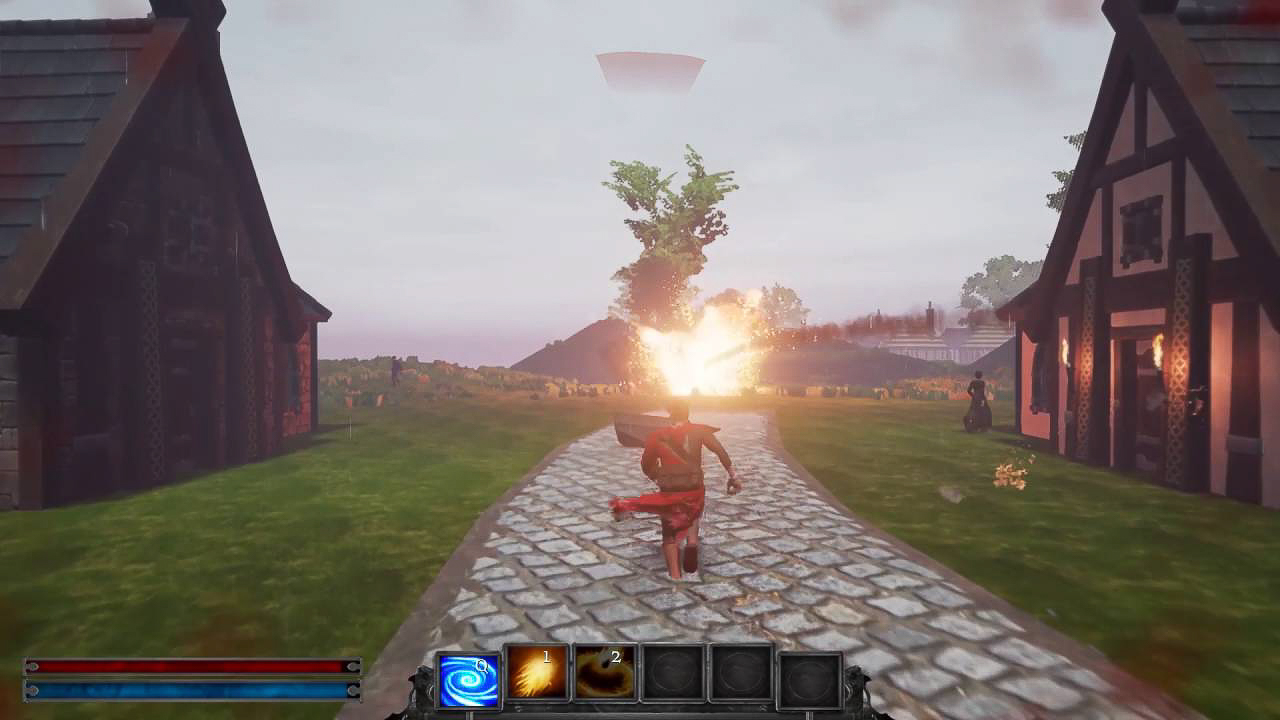 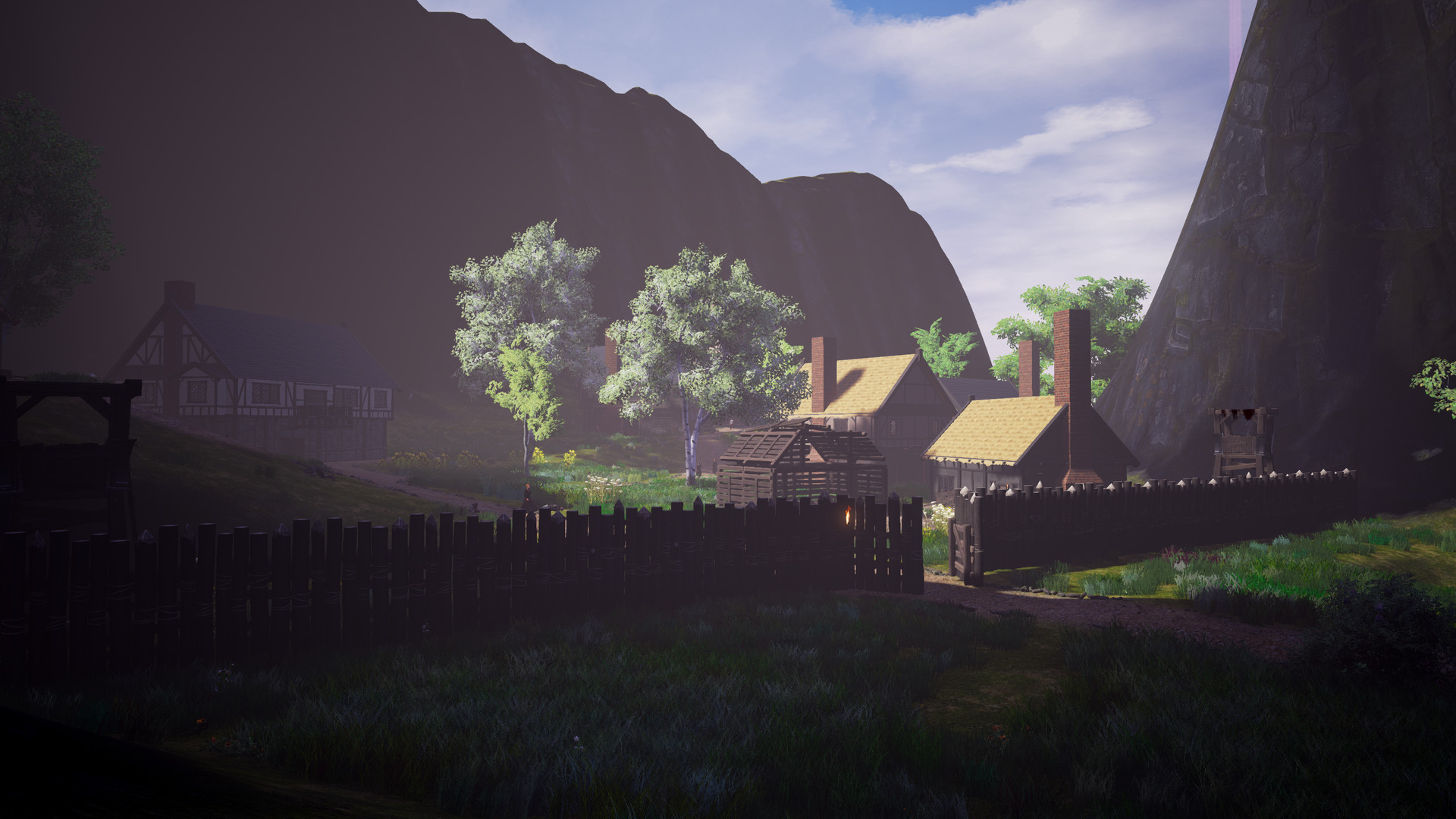 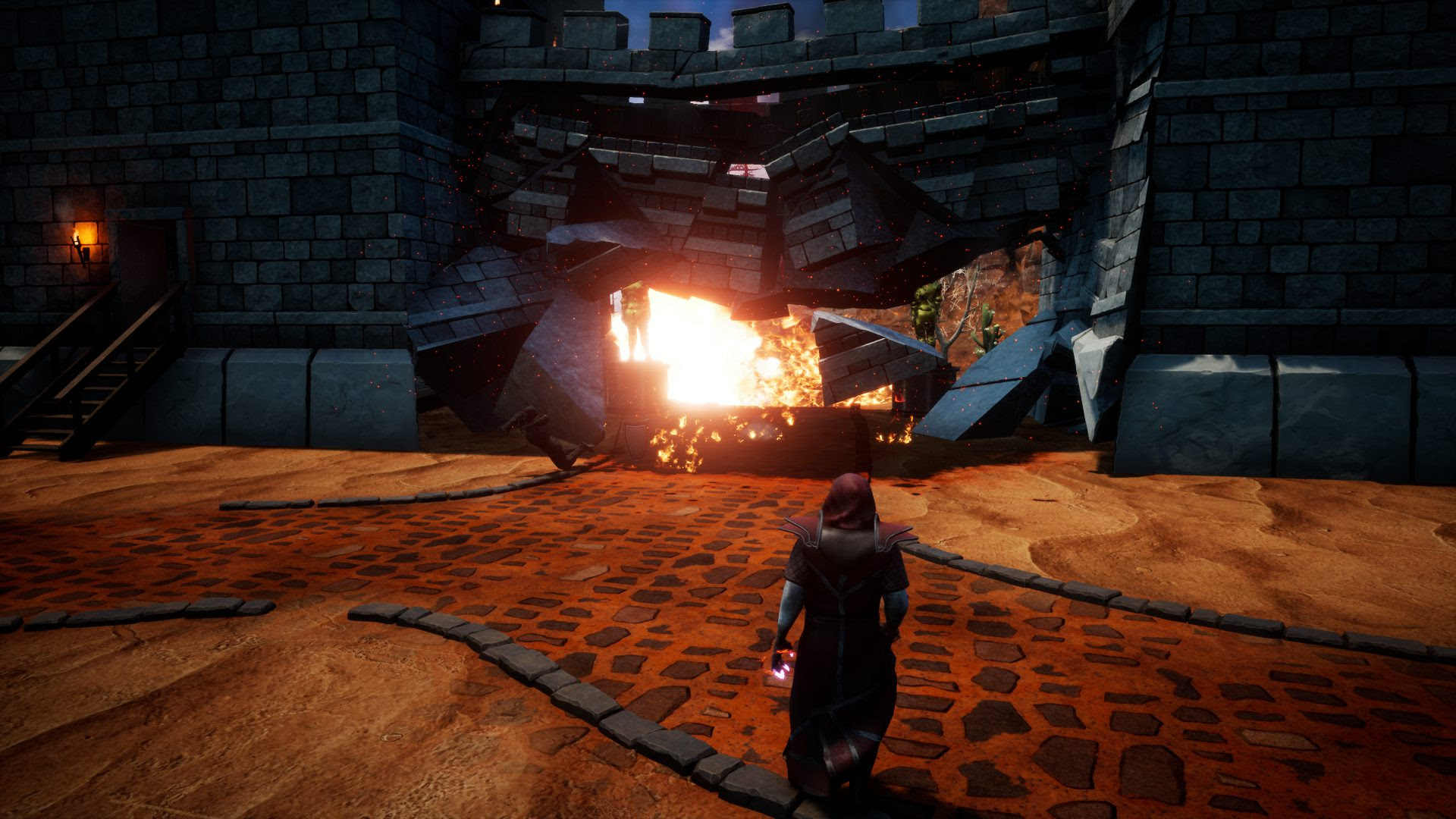 There was a moment very early in my gameplay that a different gamer emerged from within me and I was now at a round table rolling dice and quite frankly loving it. Albeit my initial introduction to Fictorum was not great, the more I played the more I enjoyed it. It was a little frustrating that the stories became repetitive, and constantly switched between action RPG and novel, but ultimately I found a balance between the two which allowed me to progress through different stories of my choosing. I very much appreciated this in the later stages of my time with Fictorum.

I must admit that it is frustrating to have the flow of the game constantly interrupted, even though I got use to it later in my play-through. It does break the fantasy elements that I found so intriguing, and this happens quite often too, making it hard to sit for longer than an hour or two before the constant stop/start becomes a hindrance.  There was always a sense of being rushed through stages when you entered them.  With a stop/start approach of telling stories mixed in with a rushed play-through of stages, the game felt confusing and the pace was hard to settle into.

I also found it strange that there is little by way of consequence to your gameplay choices. Destroy a bunch of buildings and kill innocents – doesn’t matter, don’t do that, but it also doesn’t matter. I find this strange. Normally in games where choices can be made there’s a game feature or system that adds challenges, consequences or some other element as a result of your decision. This element makes things exhilarating and I think it is hugely lacking in Fictorum.

The lack of such a feature almost makes the game less about being a wizard hellbent on revenge and more about it being a destruction simulator with some magic spells. And when you have a lot of cut and paste environments to replay through, things get a bit dull. Blowing up the same houses and traversing through the same castle walls is bland, and finishing a level to then wait for your story to appear on a scroll was just a bit of a vibe-killer.

I also find the hook of Fictorum, you’r ability to “shape” spells using special runes, a little unnecessary.  It is meant to make you feel stronger and control the pace of battle, but it just ends up never being used. When it does end up getting used it breaks the intense and dramatic feel of combat.  It also feels like a silly way to add attributes to skills when a passive skill tree is a well refined approach to achieve the same outcome.

Throughout my gameplay, if I managed to pick up a spell worth using, I never used the shaping runes because I didn’t need to. It took up too much time shaping the spell for very little benefit. Spamming my main spell without shaping runes seemed to be an effective enough method that didn’t slow down the game. With the accompaniment of either blink or dash, you could get across the map efficiently, wipe out your foe by spam clicking the left mouse button, and bam next stage or next Inquisitor boss battle achieved. It doesn’t contribute to gameplay the way it should and just ends up being a hindrance as it breaks the flow of battle and thus immersion. This again makes Fictorum feel like a destruction simulator more so than a game about a wizard trying to get revenge for his people.

“I can honestly say, however, that the gameplay becomes far more fun when you unlock better skills and different titles”

Ultimately, the first few hours of running through repetitive maps is a little dull. It actually takes a good 10+ hours of effort to even find yourself wanting to run another stage in Fictorum. I can honestly say, however, that the gameplay becomes far more fun when you unlock better skills and different titles (mage types). Once you’re able to kill everything in one hit on medium difficulty and above, playing through the stages, even when the Inquisition catch you and you’re facing a horde of soldiers, actually becomes a fun mode. You’re easily able to outflank them and wipe them out in mass for bonus essence and loot. It feels very rewarding but it’s a shame that too much effort has to be invested to achieve this result given technically you’re meant to start out all powerful and legendary.

I’m quite comfortable to look past the plethora of problems I’ve mentioned about Fictorum because to me Fictorum re-ignited my interest and passion for games that try to tell stories in a unique way. That being said, for many I think Fictorum will be the destruction simulator they’ll get bored of after a few hours of gameplay and the realisation that a lot of the assets and even levels are cut and paste jobs.  I found tiny cracks of amazing within Fictorum and so I gave it the time of day due to that, but for many working so hard at a game that can easily be replaced with a well rounded MMO may leave Fictorum fan-less.