Team based hero shooters aren’t anything new. In 2007 the most recognisable and long lasting addition to the range Team Fortress 2 was top dog, and for close to 9 years there was nobody else to play with in the playground. However in the last year if you were to throw a rock in the playground you’d have no trouble hitting a hero shooter — but why would you do that? Who throws a rock in a playground? Get help, but before you do that welcome to LawBreakers.

Set in an alternate future, an event called “The Shattering” has made permanent changes to gravity on Earth. Recovering from the event, humanity has made huge leaps forward in technology, especially in the field of gravity manipulation.

In this alternate future a powerful organised criminal syndicate is terrorising a planet experiencing an age of peace, the Breakers. To fight this scourge on society a peacekeeping team was formed — and you guessed it, they’re called the Law.

Being a player versus player hero shooter though you’re not here for story, you are here for hectic gameplay. To get things out of the way early this is a multiplayer only game; there is no single player campaign and there is no option to take on bots either. With multiple modes to play you will always be playing in a 5v5 composition again real life humans… terrible, terrible humans.

Players have 9 different classes to choose from ranging from Assassin, Titan, Gunslinger and so on with each having its own strengths and weaknesses; however they may need a little more balancing. Each class has a specific hero for the side of the conflict you’ll land on, Law or Breaker. Regardless of your heroes allegiance they will both play identically with the only difference being their aesthetic.

Your hero will have a primary attack with majority also having a secondary attack. On top of that you’ll have a grenade or projectile that will play to your characters particular play style. You’ll also have a much more powerful super ability that can be devastating, but is much slower to charge so you never want to waste them.

LawBreakers however has put a large emphasis on its gravity manipulating roster and it’s your final skill that will take advantage of that as a movement skill. These skills can range from a sprint, a teleport or having a character take flight.

Your ability to wrap your head around using these movement skills effectively will make or break you performance. Areas of the map are populated by anti-gravity zones which see the battles take on a lot more verticality. While in some maps this works quite well, others see the action funnelled into enclosed spaces that muddy the movement and combat.

Matches are fast and frenetic with a huge reliance on twitch responses and accuracy. However while other hero shooters rely on team composition I felt that LawBreakers was less about characters coordinating their attacks and more about solo players performing well. I can guarantee that most of my deaths were at the hands of a Wraith or an Assassin, extremely fast and precise enemies who I’m sure are being controlled by teenagers half my age.

Game modes offer a range of objective based battles, your usual zone and asset control each with a minor change to how it would play that makes things interesting. My two favourites were easily Occupy, which sees the zone you need to control move to a new location every 30 seconds, and Blitzball which has you escort a spherical AI voiced by Justin Roiland of Rick and Morty fame into the enemies defensive zone. The modes are a lot of fun, and once you’ve found a character to master you’ll start to see the impact you have on the battlefield.

Unfortunately this is the kind of game that you’ll be learning in the trenches. This is sink or swim gameplay, but the problem is that if you sink you are sinking on someone else’s game time. The tutorial has two facets, one a map with lazy target practice and an unstable UI trying to teach you the basics.

The second facet of the tutorial is even lazier — embedded YouTube videos explaining classes and game modes, both of which actually glaze over important details. The amount of time I spent jumping around trying to figure out how to claim the Blitzball and the entire time I literally just needed to stand on it, it was infuriating that I had to search a forum to learn that.

“This is sink or swim gameplay, but the problem is that if you sink, you are sinking on someone else’s game time.”

Design-wise is where I am torn the most. On one hand the game has fairly effortless diversity with majority of characters being people of colour. However, I can’t look past just how overly designed everything feels. LawBreakers advertising and marketing even mocked games like Overwatch, Paladins, Gigantic and Team Fortress with their “childlike animation” but fail to see that these animation choices are made because the simplistic art style makes character instantly recognisable on the battlefield. The same can not be said for LawBreakers outside of a couple key classes.

You can also expect to see the return of Loot Boxes… sorry, I mean Stash Boxes. However half the stuff you’ll unlock will mean nothing. Boot prints to inflict on enemies you kill with a swift kick that are so similar it is inconsequential, gun and hero skins that are all so “edgy” I’m worried that if I unlock one I’ll cut myself and lastly stickers for your guns that are so small I see no way that anyone would know they are there — even you! 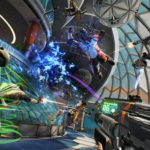 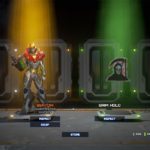 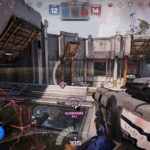 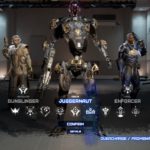 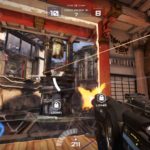 Lastly there is the elephant in the room: comparisons to Overwatch. I’m not crazy — I see that Overwatch once again dropped an update and made a fairly large announcement the same week that LawBreakers was released. It’s smart business on their part. People seem to tote all new hero shooters as “Overwatch killers” but do they need to be? LawBreakers isn’t a bad game by any means, but it just seems to be trying so hard to be so edgy and hardcore that you’ll eye-roll yourself into a coma.

I had fun with Lawbreakers, but unlike its competitors like Gigantic and Overwatch, when I stepped away I wasn’t being pulled back in by its world, characters or community. The fact that the game was a free to play model until earlier this year really shows and it is already starting with a fairly sparse community of players. Games like this live and breathe on player community and I just don’t know how long it will last when it doesn’t really have a personality to share with the world.