Ever since they broke free of Rayman, the Rabbids have been causing no shortage of mayhem all over the place. With a string of games in their wake and even their own TV show, these rascally Rabbids have got it made. Now with the release of their latest endeavour, Mario + Rabbids Kingdom Battle, they’ve hit the jackpot when it comes to entertainment.

I’m not going to lie, right from the moment Mario + Rabbids Kingdom Battle was announced I was excited – no that seems like too small of a word… I was ecstatic! The combination of the Mario universe and the Rabbids just seemed to be a match made in heaven, for not only myself but a lot of Nintendo fans. In fact if I’m being honest I was kind of surprised this hadn’t been attempted sooner.

Right from the get-go it’s clear that Mario + Rabbids Kingdom Battle isn’t like any of the other Mario games out there. It’s a turn based strategy game built around the XCOM combat system with a delightfully accessible and visual world. Add to this a hefty dose of humour thanks to the Rabbids and you’ve got yourself a game with more layers than an onion.

The story for Mario + Rabbids Kingdom Battle is a hilarious introduction to the Mario universe from Ubisoft and is a wonderful foundation to start the game on. The game starts with a Massive Mario fan and programmer (who just so happens to look a heck of a lot like Tracer) along with her trusty robot friend Beep-O who have designed a visor called the SupaMerge capable of merging two objects together. Sadly it has a slight glitch and isn’t quite ready for use yet. Meanwhile, time-travelling Rabbids in their washing machine stumble across the visor. One of the Rabbids dons the device and begins merging everything it lays its eyes on. All havoc breaks loose and before too long the lint hits the dryer fan and they find themselves in the Mushroom Kingdom with everything out of order.

Kingdom Battle’s main premise has our eternal plumber hero Mario leading a band of misfit cosplaying doppelgangers on an adventure to fix the Mushroom Kingdom. The game’s playable characters include Nintendo’s original fantastic four – Mario, Luigi, Peach and Yoshi, along with their Rabbid counterparts. You’ll quickly realise that both Ubisoft and Nintendo have gotten a little bit more creative with their personalities in this game. And it’s simply brilliant!

You’re able to have up to three characters in your party at any one time (Mario plus two others). For the most part this is your typical Mario world game where you’ll walk around collecting coins and solving puzzles for various collectibles and new weapons. However, during combat it turns into a turn based strategy game where on your turn each of your three characters can move, attack and use one special ability, in no particular order. You also only start the game with three characters available having to unlock the others as you progress through the story, so you’ll be hot swapping your team as you collect them to best suit the current battle situation.

As I’ve stated before this is an XCOM style game and that means it has cover and half-cover, line of sight, chance to hit, overwatch, criticals and supers, skill trees, and whole lot of calculating to be done for movement to be spent across its grid layouts. Whilst all these squad based tactics and skill trees are normally quite complex in turn-based tactics games, here in Mario + Rabbids Kingdom Battle they’ve been simplified to some degree.

A simple UI and clean presentation go a long way to helping beginners understand the intricacies of team strategy and the turn based tactics genre. Focusing on just the core combat and character customisation means there’s nothing to distract you from figuring out the basic concepts of this exciting genre. A bunch of funny Rabbid references splattered through out and no permadeath is a particularly nice bonus as well.

Not wielding a fiery flower this time, Mario and his friends have guns… a lot of guns!  Should we blame the Rabbids? At any rate there’s lots of fun, goofy named and particularly kooky looking guns and other odd weaponry that you will spend your time finding and then unlocking. Your decision on which weapons to go after will be based more on cosmetic or comedy value rather than strategic value if you’re anything like me. 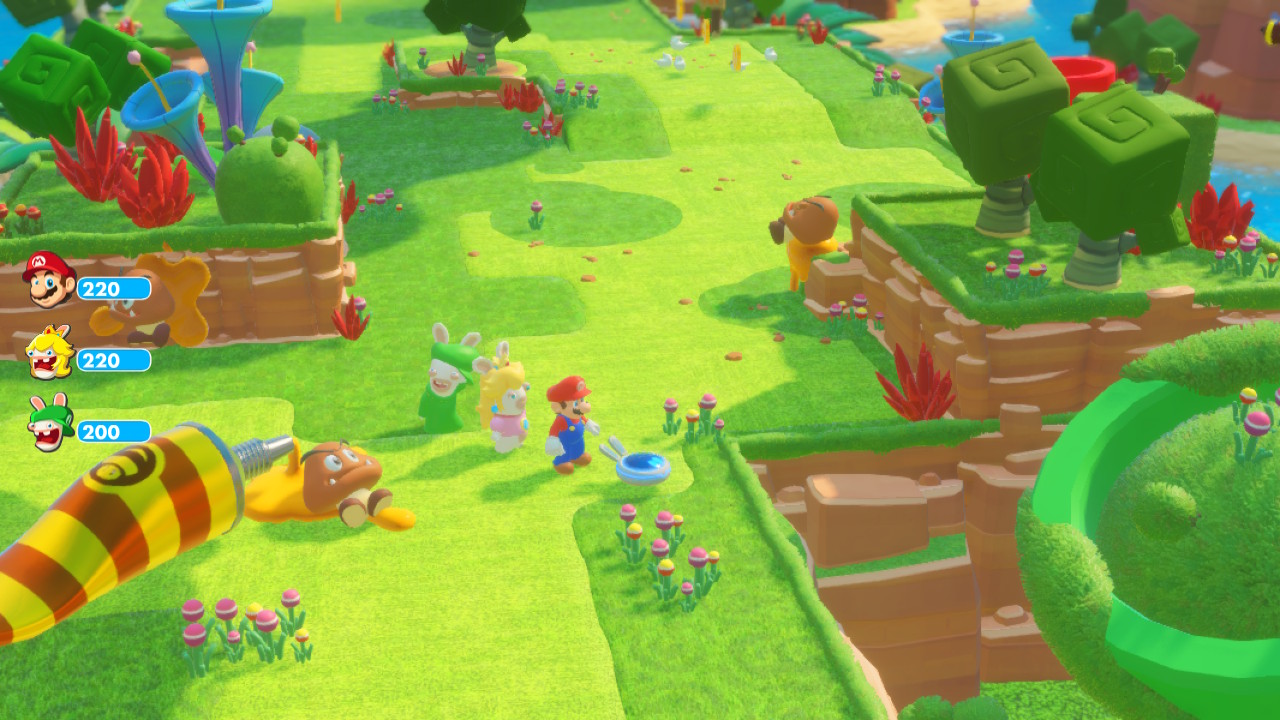 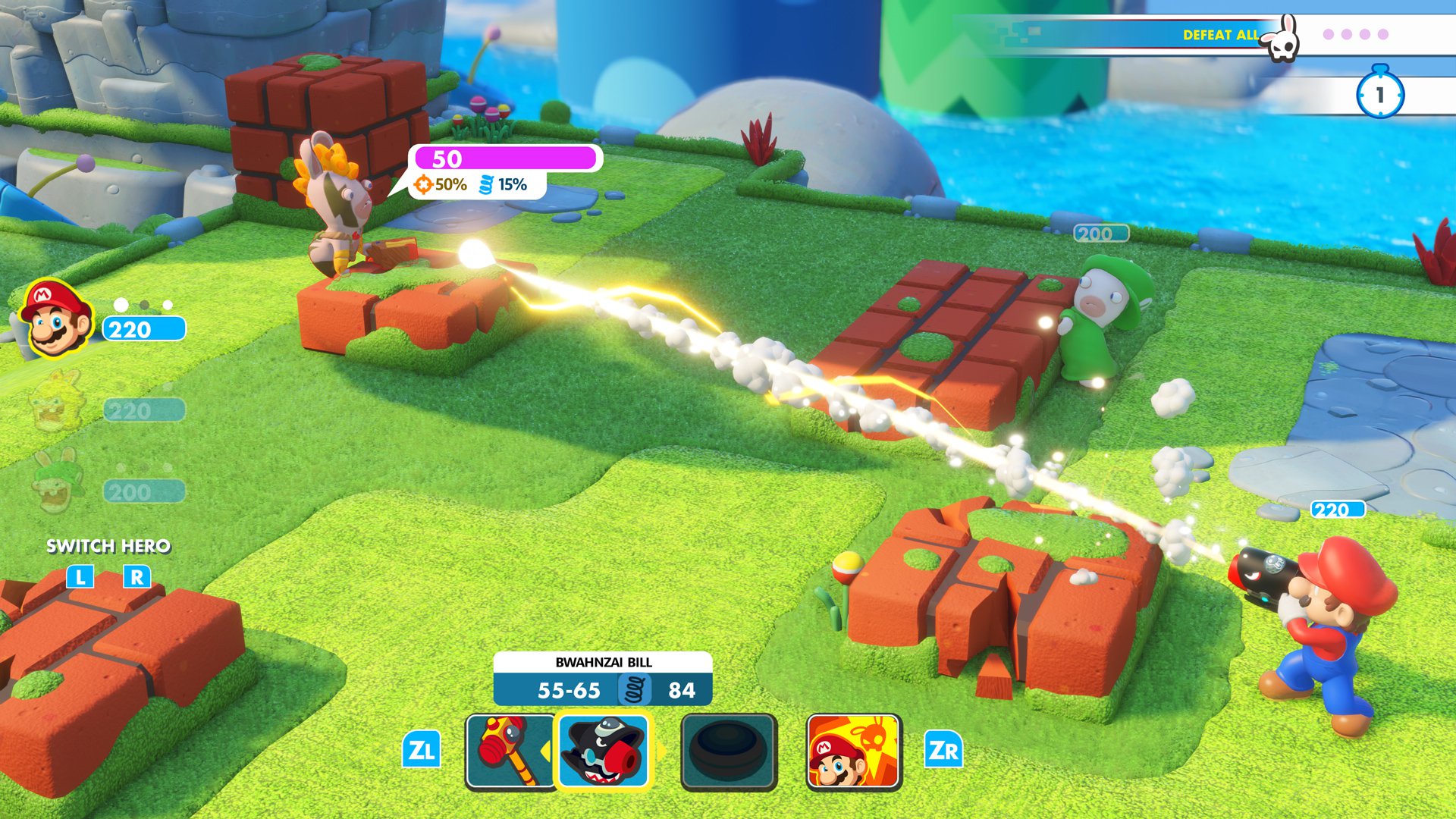 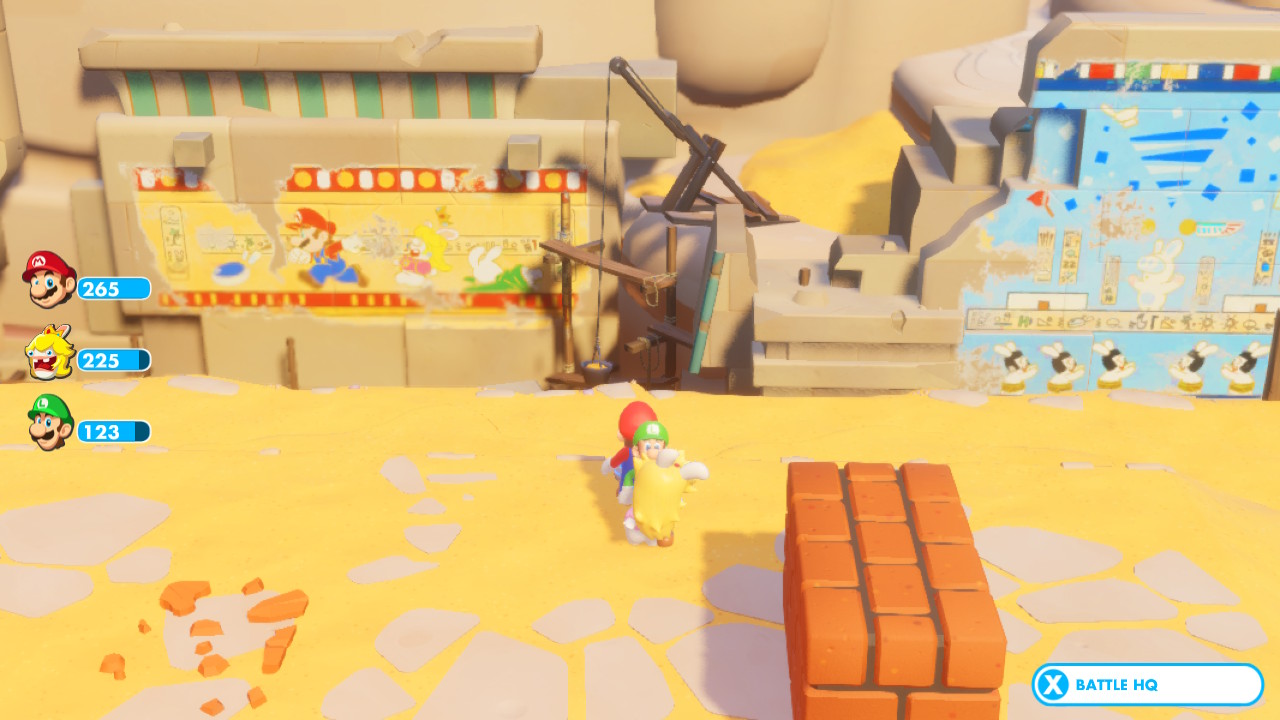 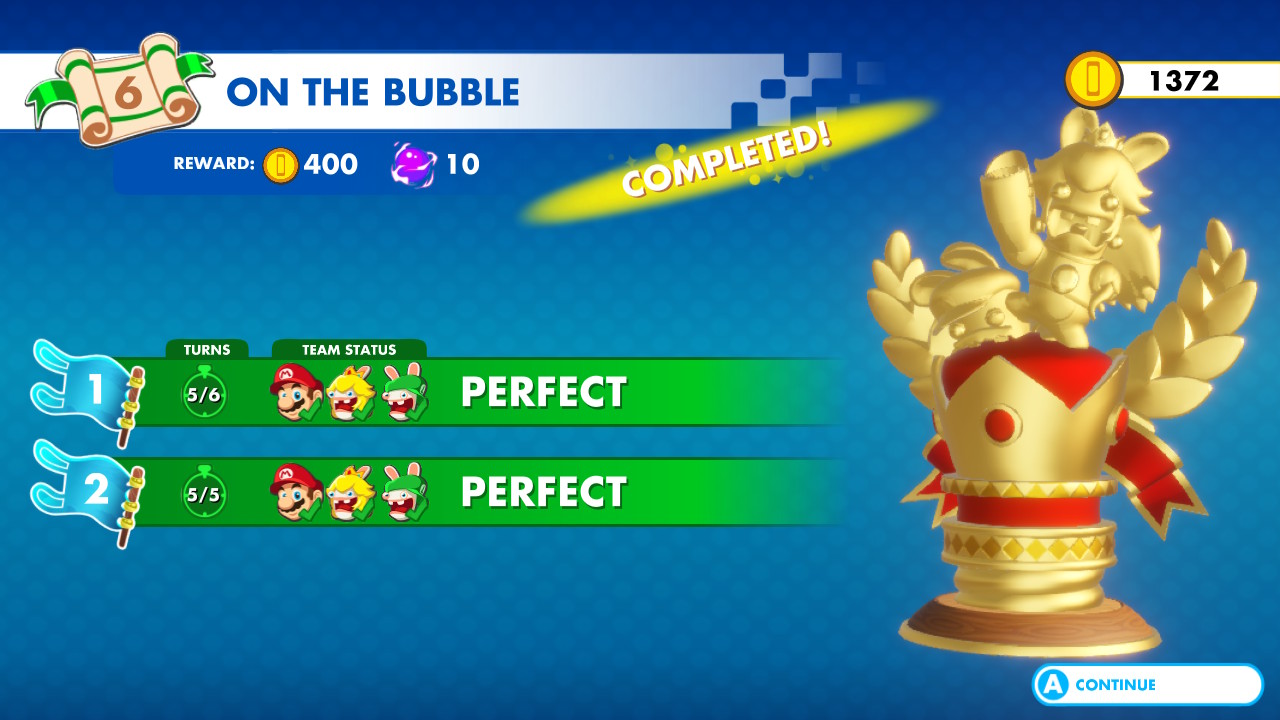 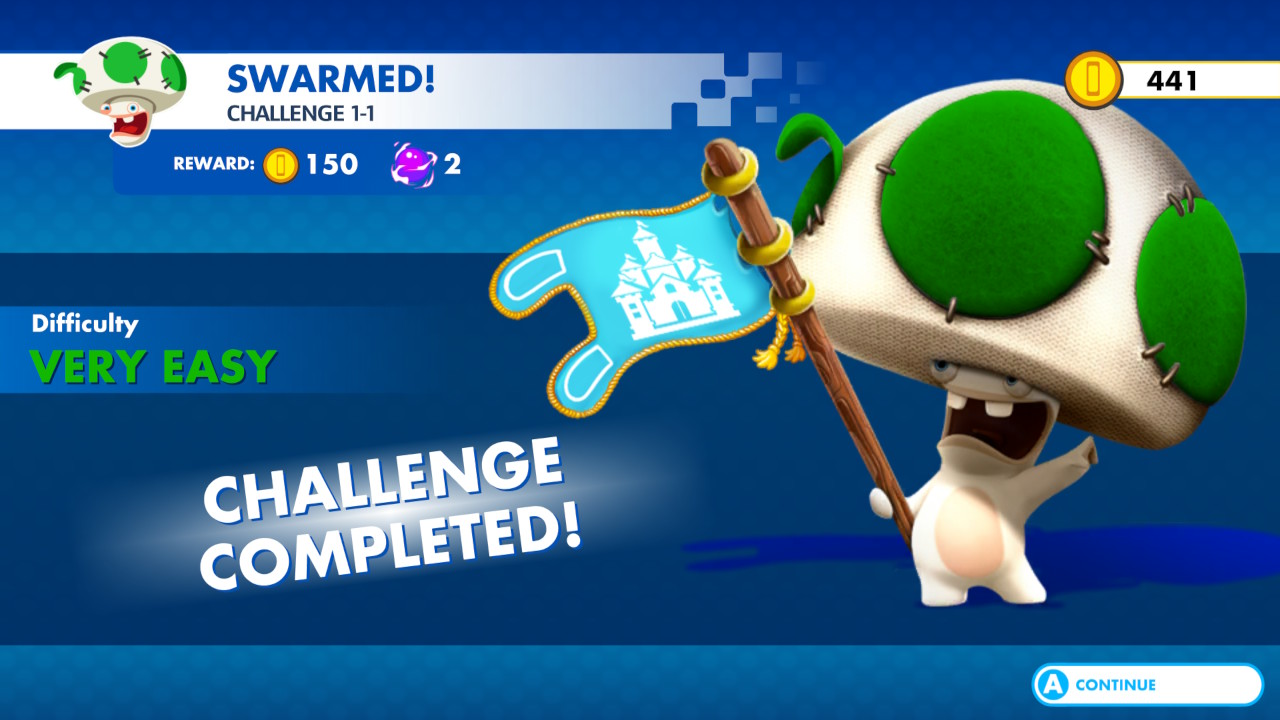 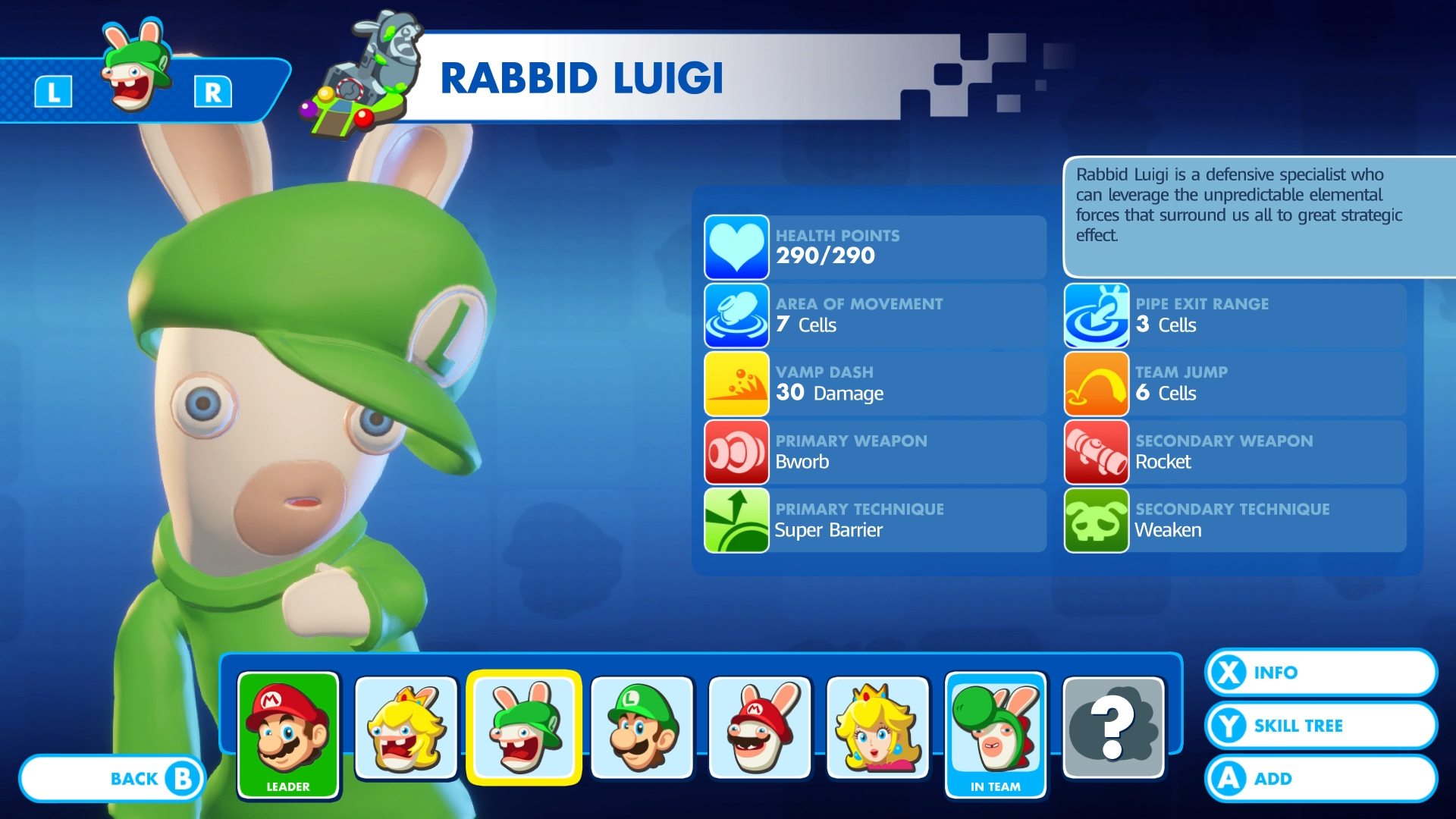 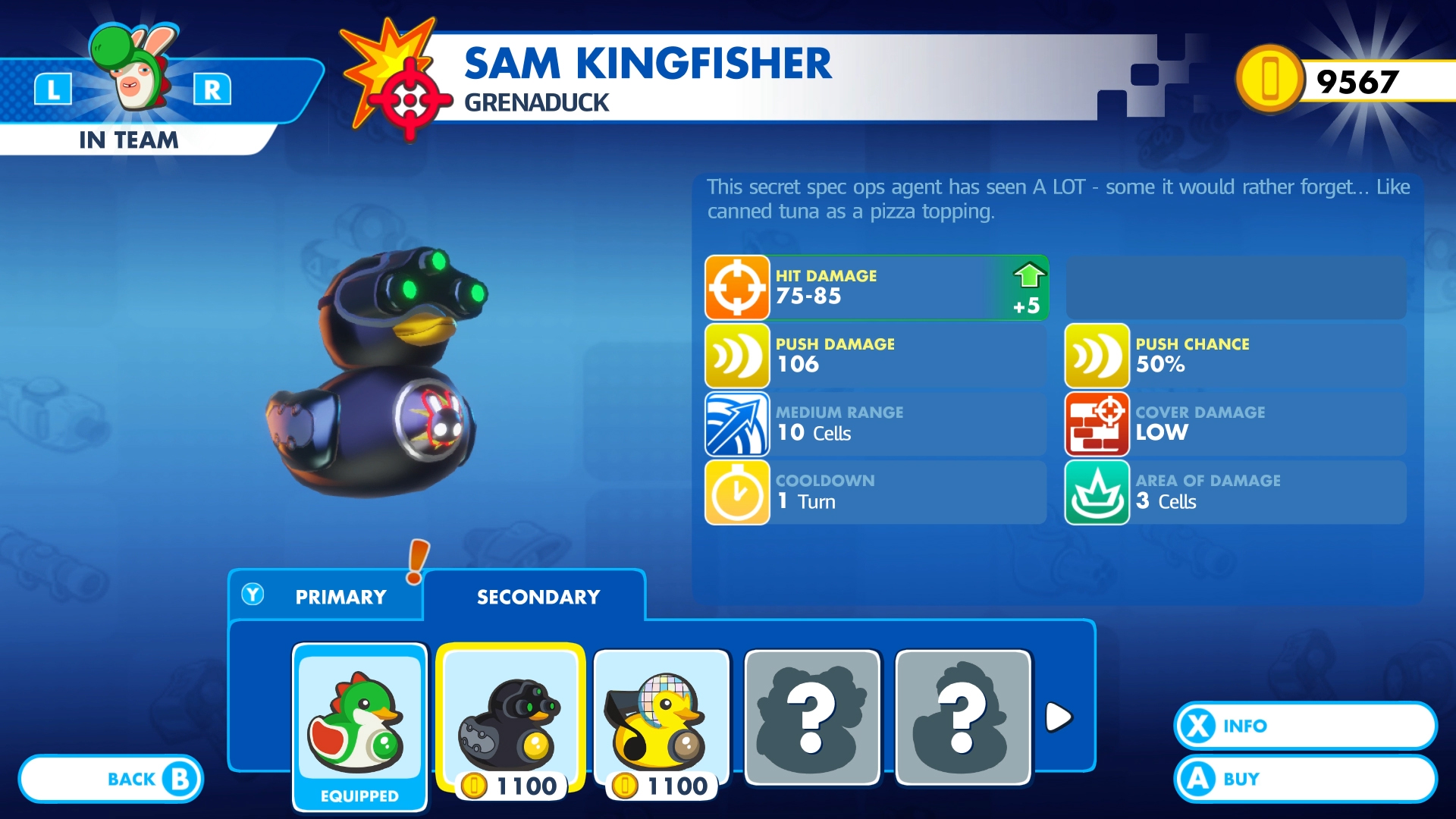 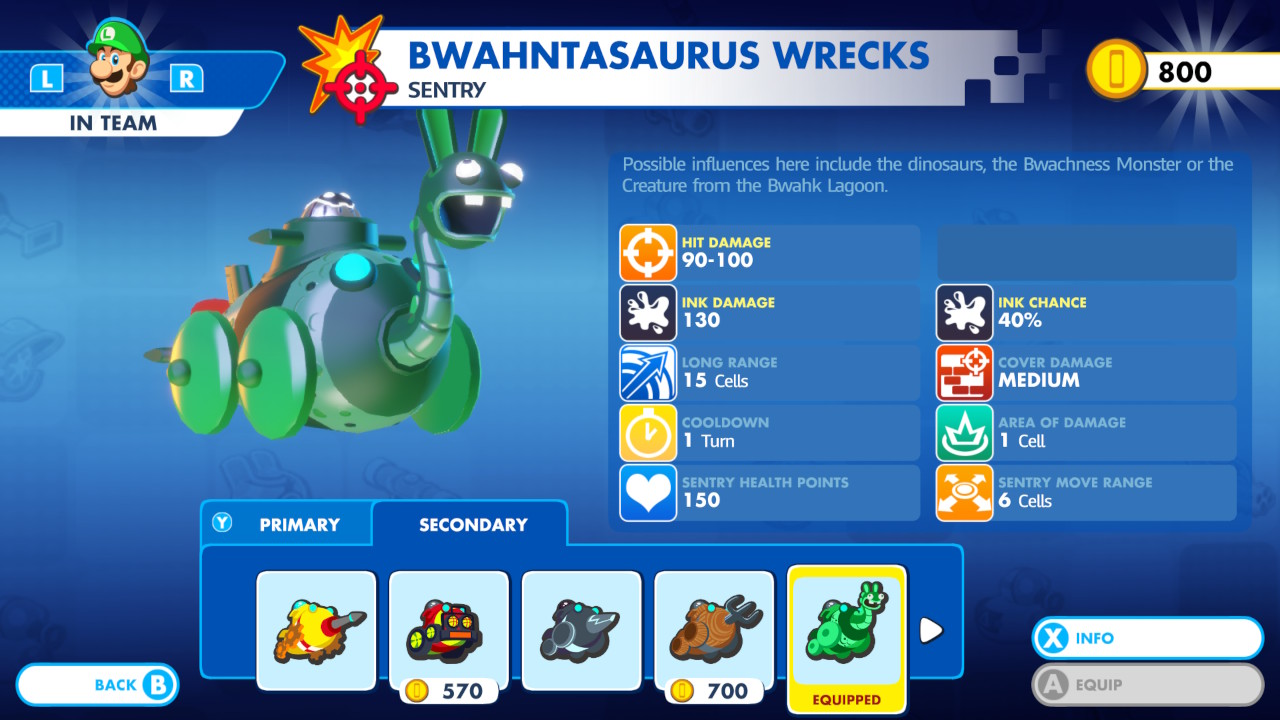 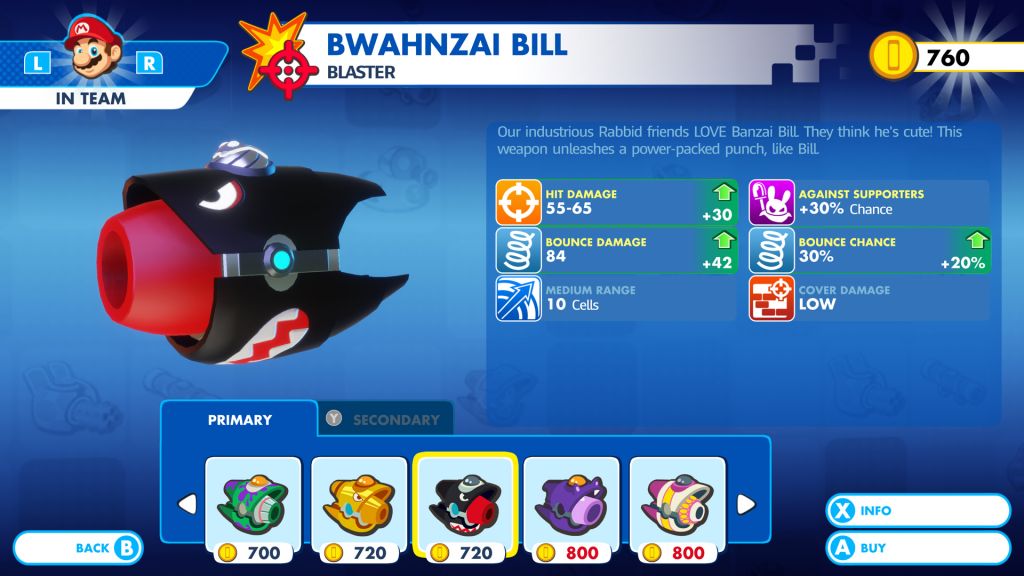 Despite being a simplified XCOM, the actual turn-based battles aren’t necessarily easy. Mario + Rabbids’ difficulty spikes rather quickly as the game progresses. At first it may seem like a cake walk to the experienced gamer, simply flying through the earlier encounters. But it isn’t long before you’ve unknowingly been flanked by various types of enemy Rabbids who wipe you out in only a few turns. This is where the game makes it crucial to develop new strategies to take advantage of the various talents and abilities of each character, cycling them around for particular battles and boss encounters.

With new enemy types constantly being added as you progress through the game you’ll need to know how to heal, when to taunt a melee-heavy brute to take pressure off your sniper, or learn to go straight for the enemy healers before taking down the boss. It’s all crucial to victory and is the perfect warm up to Mario + Rabbids Buddydome and the end level challenges!

The Buddydome is where you and a friend can play together (however if Nintendo don’t make a battle Buddydome at some point I think this is a lost opportunity) each controlling a team of two heroes to complete a campaign involving lots of challenges. Challenges are unlocked by finishing a world in story mode and are available when you walk back through, pin pointed by a mushroom hat wearing Rabbid.

“Rabbid Peach will stop at nothing to get her main squeeze Mario and the perfect selfie whilst she’s at it.”

Whilst there are 8 playable characters in Mario + Rabbids Kingdom Battle, there’s only one that truly stands out, and she’s had her own Instagram account since the games announcement back at E3 earlier this year.

From the moment Rabbid Peach showed her face in the trailer for Mario + Rabbids Kingdom Battle I was smitten. Her unique blend of sassiness, vanity and lens loving attitude all had me hooked. Since being graced by her presence in the game I’m now working on a 32 metre statue and getting religious rights for the First church of Rabbid Peach from the government.

Described as sassy but easily bored, with a fondness for the camera, Rabbid Peach will stop at nothing to get her main squeeze Mario and the perfect selfie whilst she’s at it. Unfortunately for Rabbid Peach the real Princess Peach just so happens to be around and she’s definitely no damsel in distress any more! 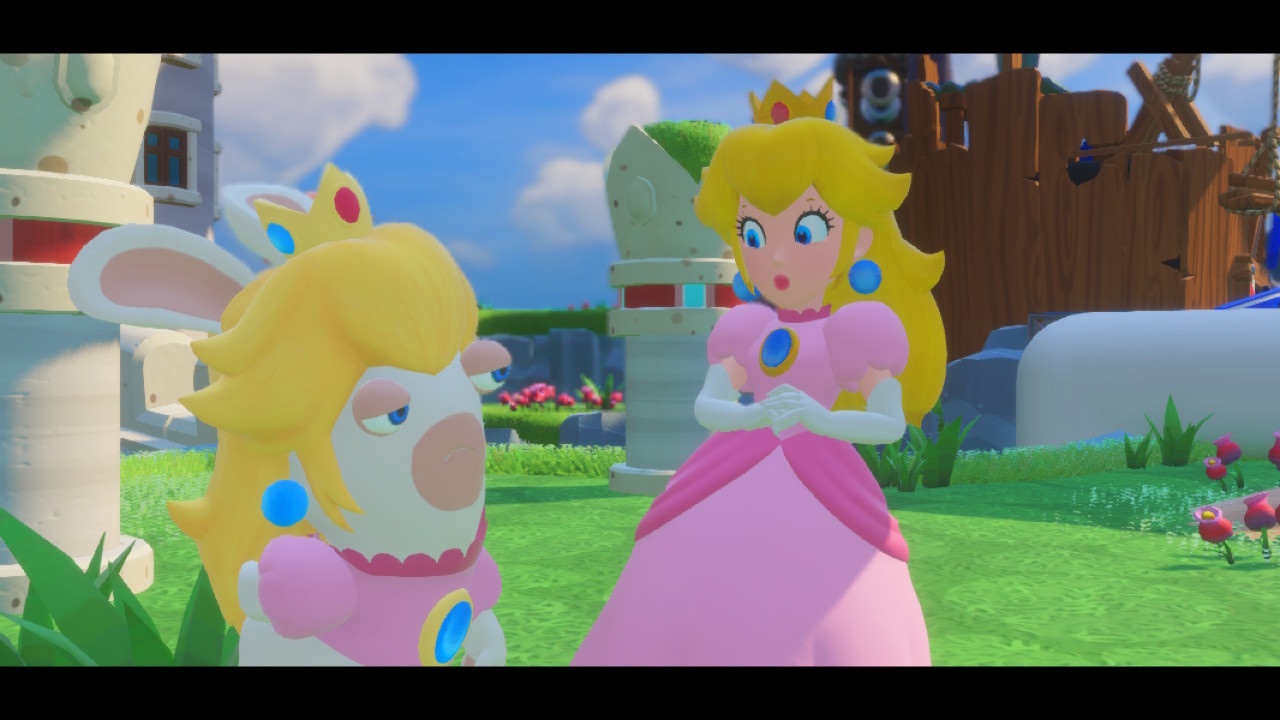 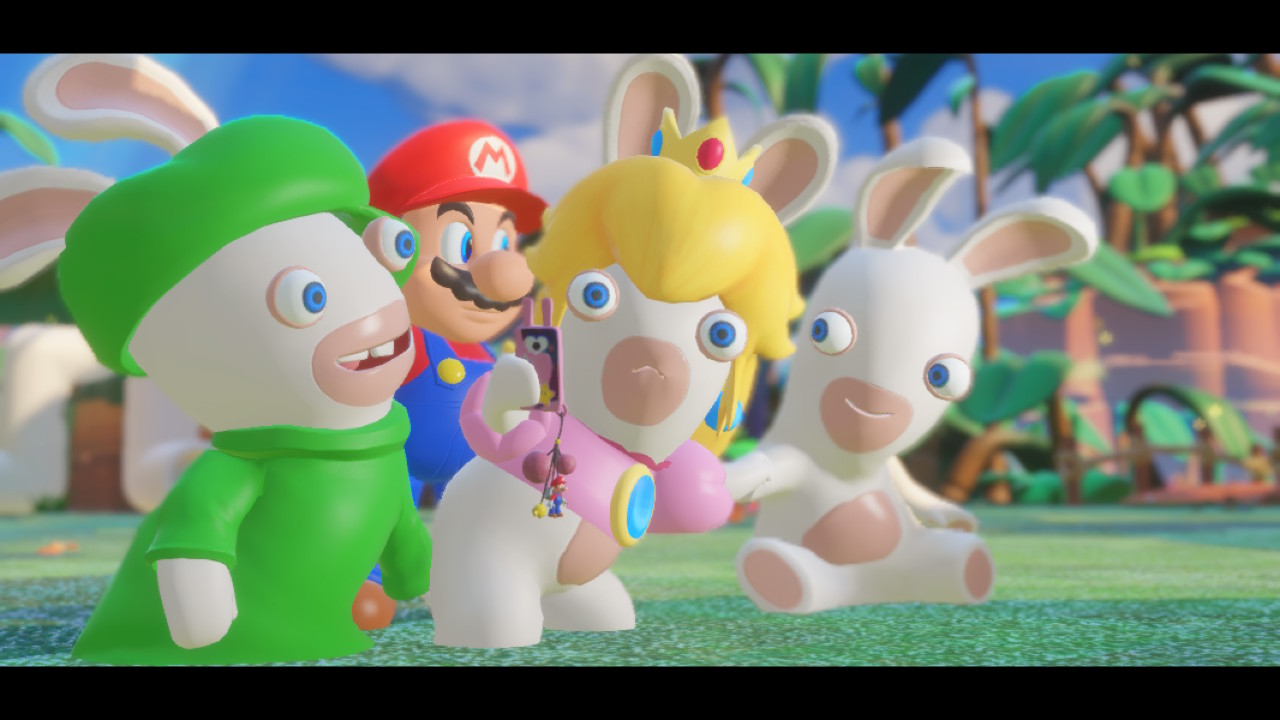 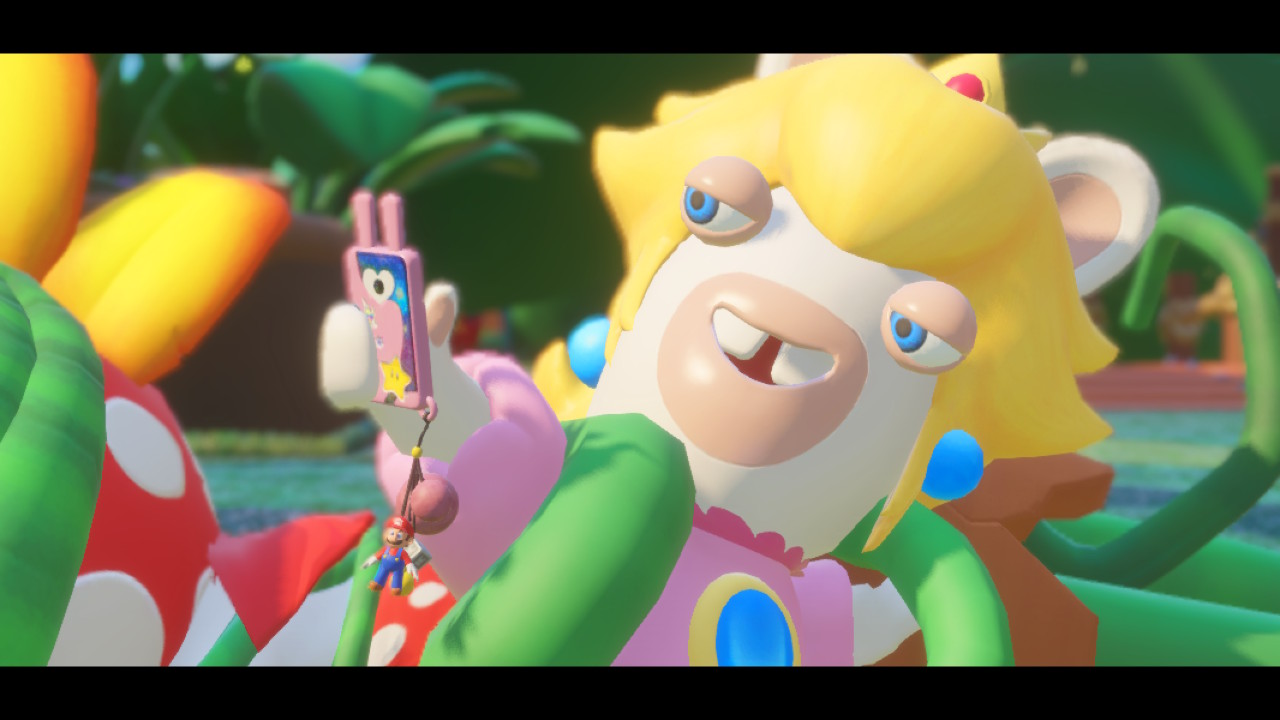 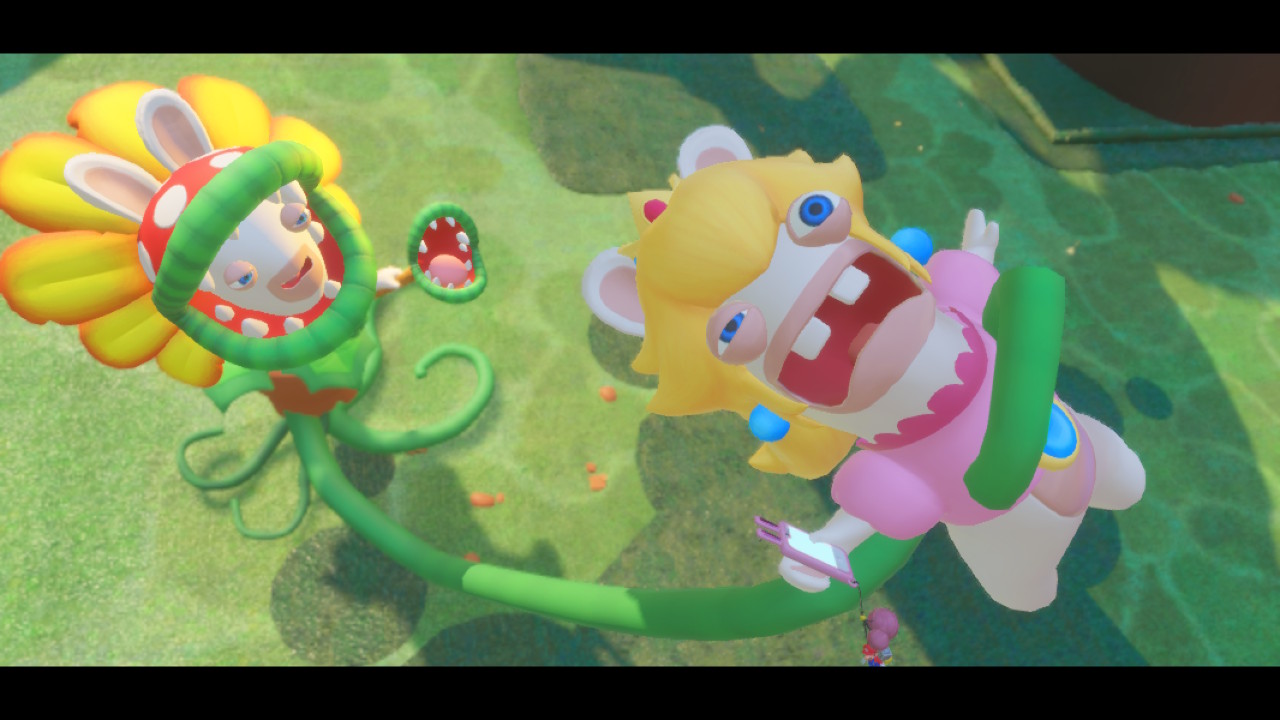 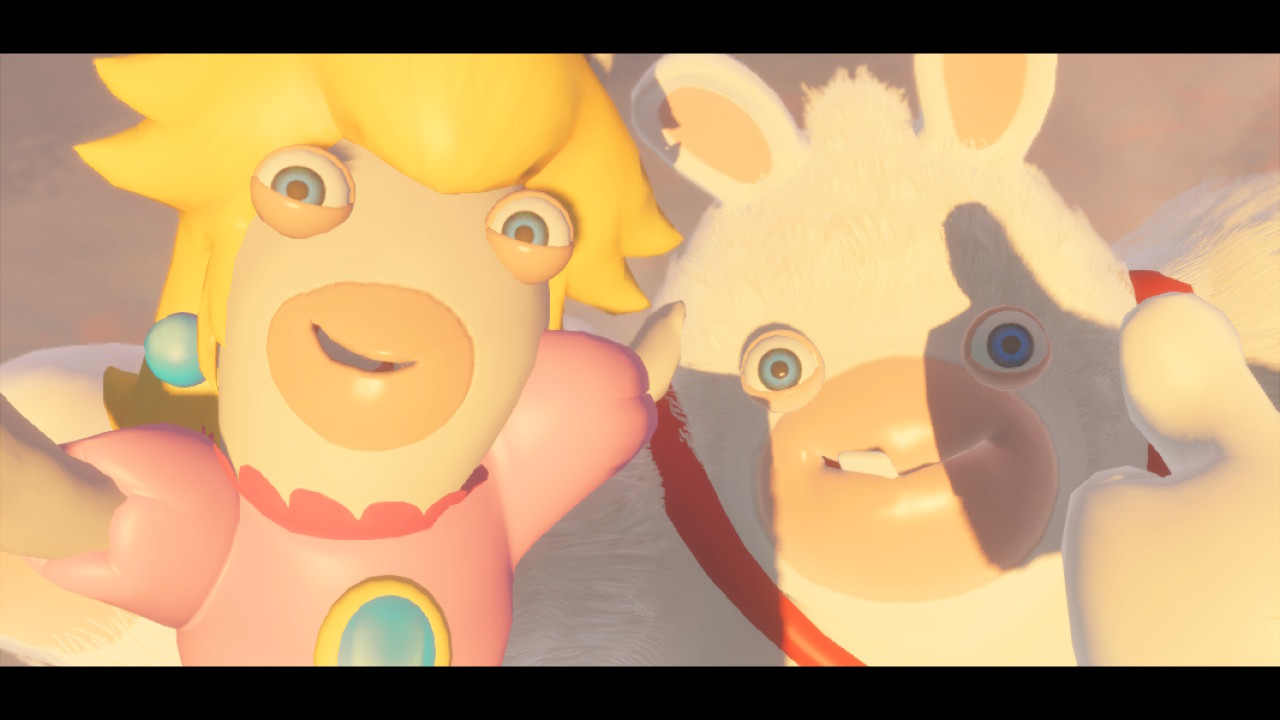 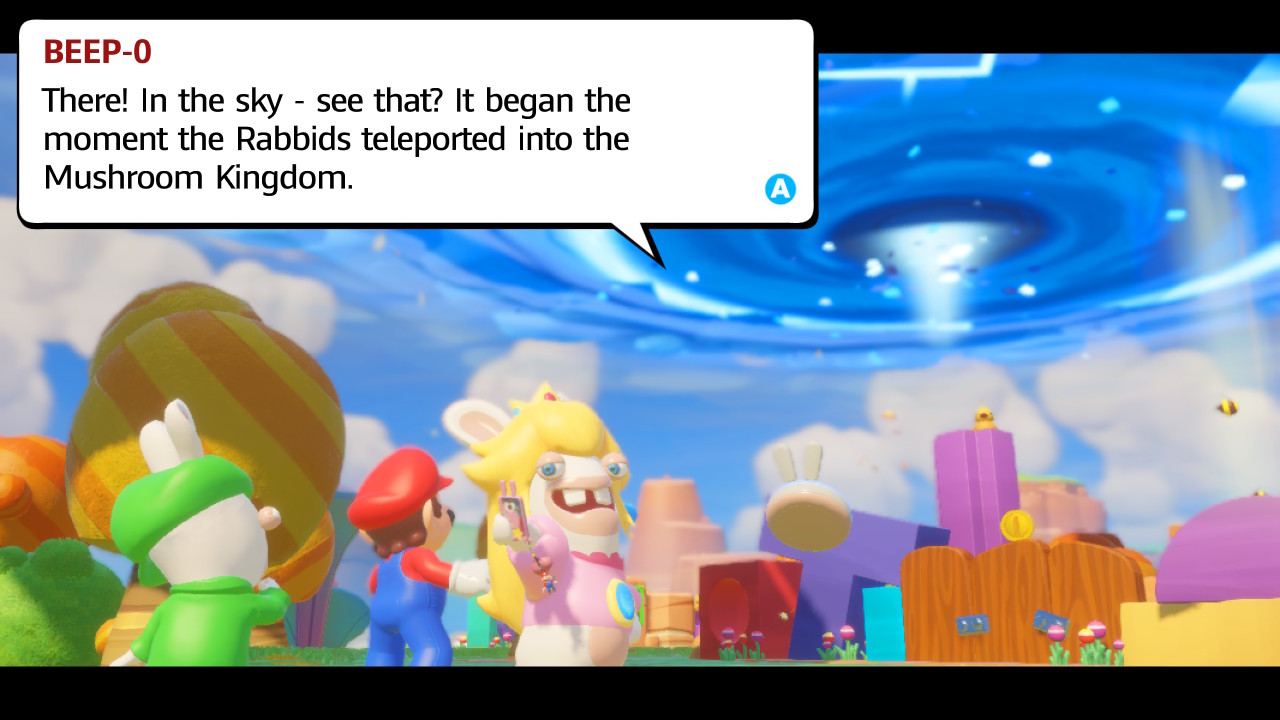 Although I have a lot of love for Mario + Rabbids Kingdom Battle, that doesn’t mean it isn’t without its faults. I felt that the whole moving around the explorations zones was to a degree underutilised here by Ubisoft, with you simply being moved from battle to battle in a continuous fashion unable to jump or explore the path. I cant help but think how much more exciting this portion of the game could have been had they taken some more inspiration from the Mario RPGs.

I also found the coin system irksome. Collecting coins as you walk around the exploration zones like crumbs from Hansel and Gretel or earning them as you win battles and complete challenges, it all feels a bit slow to me. Particularly when you use them to unlock and buy the weapons you equip to you characters. The slow trickle of coins meant I never went crazy and bought cool and fun things to experiment with, instead choosing to hoard my gold like a crazy leprechaun.

Mario + Rabbids Kingdom Battle has definitely become a gaming obsession for me. Although I still have issues with the game’s coin system and lack of a competitive multiplayer, those do nothing to take away from the games overall success.

It’s worth noting and praising just how well Ubisoft have managed to make a Mario game. Although this game has been developed by the French studio, it still feels like its come from Nintendo’s own Japanese studio. The levels are colourful and cheerful, and the characters are eccentric just as they are in all Nintendo games, making the atmosphere almost impossible to distinguish from other recent Mario titles. This is one of my stand out games of the year and I’ll be playing it well into the future; it’s exactly the boost in content the Switch needed.