Masquerada: Songs and Shadows is the debut PC and console title from Singapore based Witching Hour Studio — having previously worked on only iOS and Android games. The game had already launched on PC back on September 30th 2016 after they reached their modest Kickstarter goal in only 12 days earlier that year. Now the game is set to bring its isometric, action based role-playing to Xbox One and PS4.

The game takes place in Citte della Ombre, a city that has very clear Venetian inspiration. Just like 15th Century Venice, the Citte della Ombre is suffering from a pretty obvious class division. Sitting at the top are the Masquerada who wield the Mascherines (gilded decorative masks that imbue their wearers with magical prowess). The city is a hub of magic, political intrigue and a strong religion fuelled through music.

The game opens with a prologue. While acting as a tutorial to the basic gameplay mechanics, the prologue also gives us an idea of the current political state of the Citte. We play as Cyrus Gavar for the tutorial and are dropped into the action as he and his team have begun an assault on the White Spire, where the vault of Mascherines is located. Cyrus has instigated a class war in the city and his team are ransacking the magical weaponry to arm the lower class. Unfortunately as the prologue wraps up Cyrus is separated from his fellow combatants and is executed.

Now begins the game proper and we get an introduction to the real protagonist, Cicero Gavar. Younger brother to Cyrus, Cicero is returning to the Citte after exile for his minimal part in his brothers rebellion 5 years prior. Quickly we learn that the head of the city has summoned us back from exile to assist in a kidnapping investigation. However what starts as a simple investigation quickly drags you into the still ongoing class war, political intrigue, revelations of ancient history and a cultist worshipping an otherworldly presence.

Luckily though you aren’t doing this alone as you slowly put together a team to assist in your investigation. Kalden, Amadea, Tiziana and Vasco all seem to have something their hiding but have thrown in with Cicero’s cause for better or worse. It is in these characters as well as the rest of the cast that we come across that the game finds its strongest suit.

Unfortunately the one downside to the world building is that it suffers from what a lot of modern RPG’s suffer from, a reliance on in game codex to explain concepts instead of organic storytelling. What this can mean is that sometimes you are left with characters using dialogue bogged down by in world terminology. It can leave the story a little murky when they begin speaking about the different political sects of Ombre as well as some of the other concepts the game is based on.

In modern RPGs it is very rare to find a fully voiced cast outside of AAA titles. Thankfully Masquerada doesn’t just voice all of its dialogue (aside from overhearing NPC conversations while wandering zones), they also bring an A+ cast. Lead by voice acting juggernaut Matthew Mercer there is a bevy of recognisable voices here: Jennifer Hale, Felicia Day, Rick D. Wasserman, Catherine Taber and the list goes on.

While nothing in the script ever calls for an award winning performance you can clearly hear the effect that having a cast of experienced voice actors makes. Having all conversations voiced really helps in bringing this world to life, it moves the story at a good pace even with the aforementioned clumsy in world terminology. As well as the enjoyable voice acting the game continues to be an audible gift as the musical score offers some enjoyable, if not memorable, tracks.

Visually the game utilises an isometric camera angle to give a raised view looking down on the world. This lets the game utilise pre-rendered backdrops that are colourful and distinct. The 2D line work with 3D character models give Masquerada a distinct art style amongst other RPG’s.

Dialogue is acted out on banners alongside their subtitles to give the characters more personality and cut-scenes are reminiscent of motion comics. Panels move in and out of the scene and offer small movement to give an idea of the action taking place.

Menus are ornate to match the setting and I was especially enamoured with the screen that allows you to select your team mates with beautiful artwork that reminds me of Art Nouveau. While the rest of the game does have lovely colourful backdrops, I can’t help but feel a little disappointed on the occasions when characters mentioned beautiful views. This is because the top down view does limit that view and the comic book like cut-scenes don’t make up for this limitation.

The gameplay is in no way bad but it does feel much more frenetic than was intended.

While the story, artistic style and audio are all strong aspects of Masquerada, it does have a falter in gameplay. The gameplay is in no way bad but it does feel much more frenetic than was intended. There is a fair amount of strategy in how to face a fight but that all seems to fall away mid battle and the screen becomes a mess of area of effect attacks and a mass of characters piling up together.

Cicero is given a Mascherines early in the game and you are asked to pick an elemental adept: Water, Fire, Earth or Air — each has its own strengths, weaknesses and preferred art style. Thankfully characters do not have specific weaknesses to elements and each of your four characters will control one of the four elements so you’re never at a disadvantage for taking the character that matches your own elemental choice.

Classes essentially fall into a tank, a melee DPS and a ranged DPS role. Cicero luckily has the ability to swap between the three classes and your fellow teammates are made up of 2 tanks, one melee and one ranged DPS. Each mission you will take with you two teammates, occasionally locked by a necessary character — thankfully your ability to swap class instantly means that you are able to mix up your teams as you need.

In battle you will be reliant on direction based combat. Both your allies and enemies will have a semi circle in front of them acting as a  guard metre that will diminish when taking direct damage before loosing health points. This sees you using tanks to take enemies attention while the DPS attempts flanking manoeuvres. With this you also have four abilities based on your elemental powers that help change the flow of combat. Lastly as your Mascherines builds up charge you will be able to launch a special attack which is based on the Mascherines your team have equipped.

While the game does offer you the ability to pause and issue orders as well as switching between players, I found more often than not I would rely on my companions AI and focus the attacks I had mastered. While there is a level of tactics to this it can become a screen filled with effects and enemies that start to become difficult to tell apart. The skill tree for characters does offer the chance to really hone the skills you’re after but once I unlocked the earth ability that created a vortex of mud that healed allies and damaged enemies I would simply rinse and repeat that on a regular basis.

Outside of battle the levels and story are very linear. Levels comprise of many corridors leading you from one battle to the next. Small amounts of exploration will normally find you another codex entry, a new Mascherine or other consumables you’ll use to make small stat boosts.

In my time with Masquerada I found one puzzle in the first few hours, however I must admit that while I did solve it, I essentially just had to keep moving to eventually get the solution. Unfortunately I also found that I would quite often have to hit a prompt button a couple of times to interact with the very blatant items that either provide codex or move the story along. 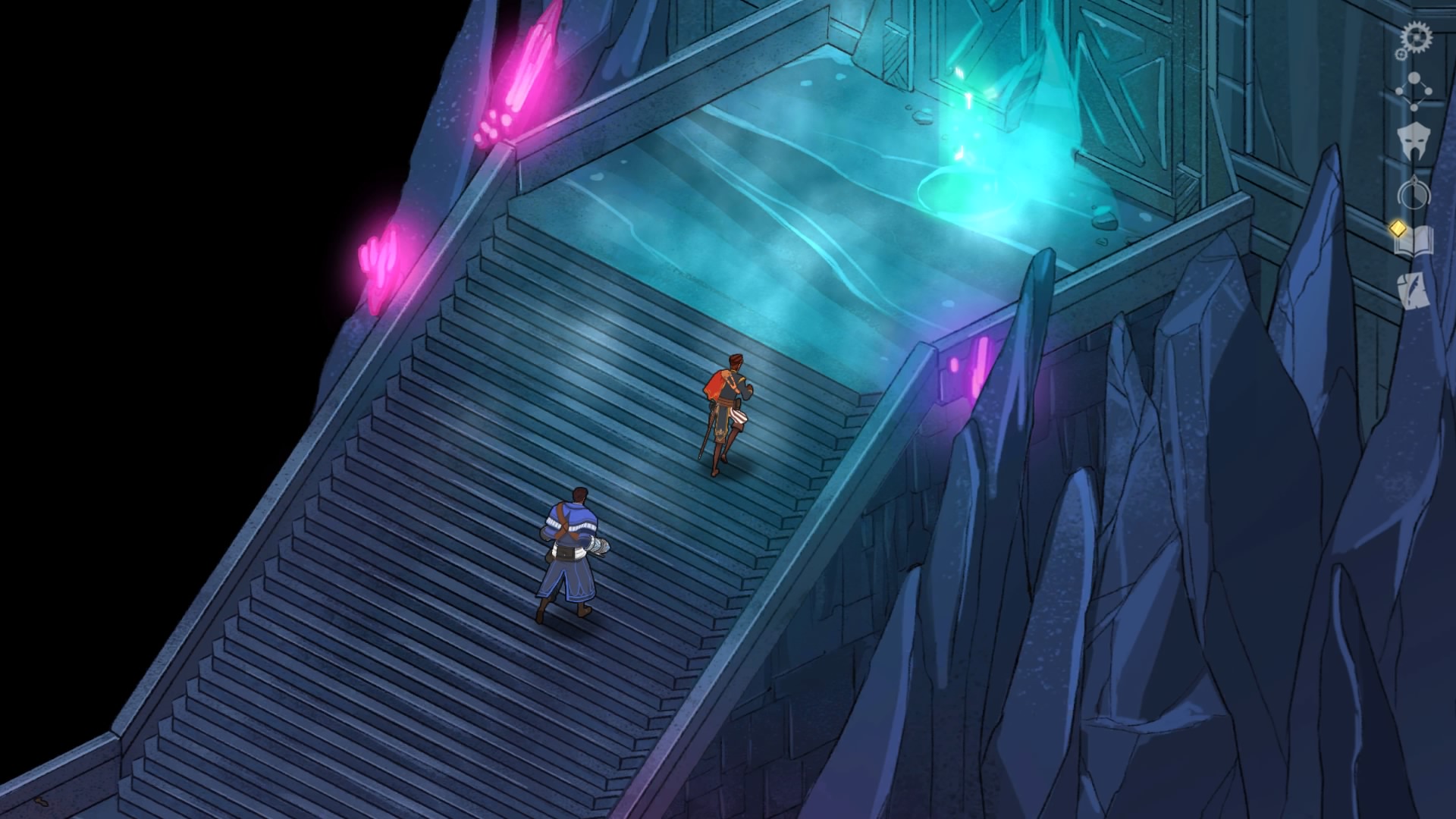 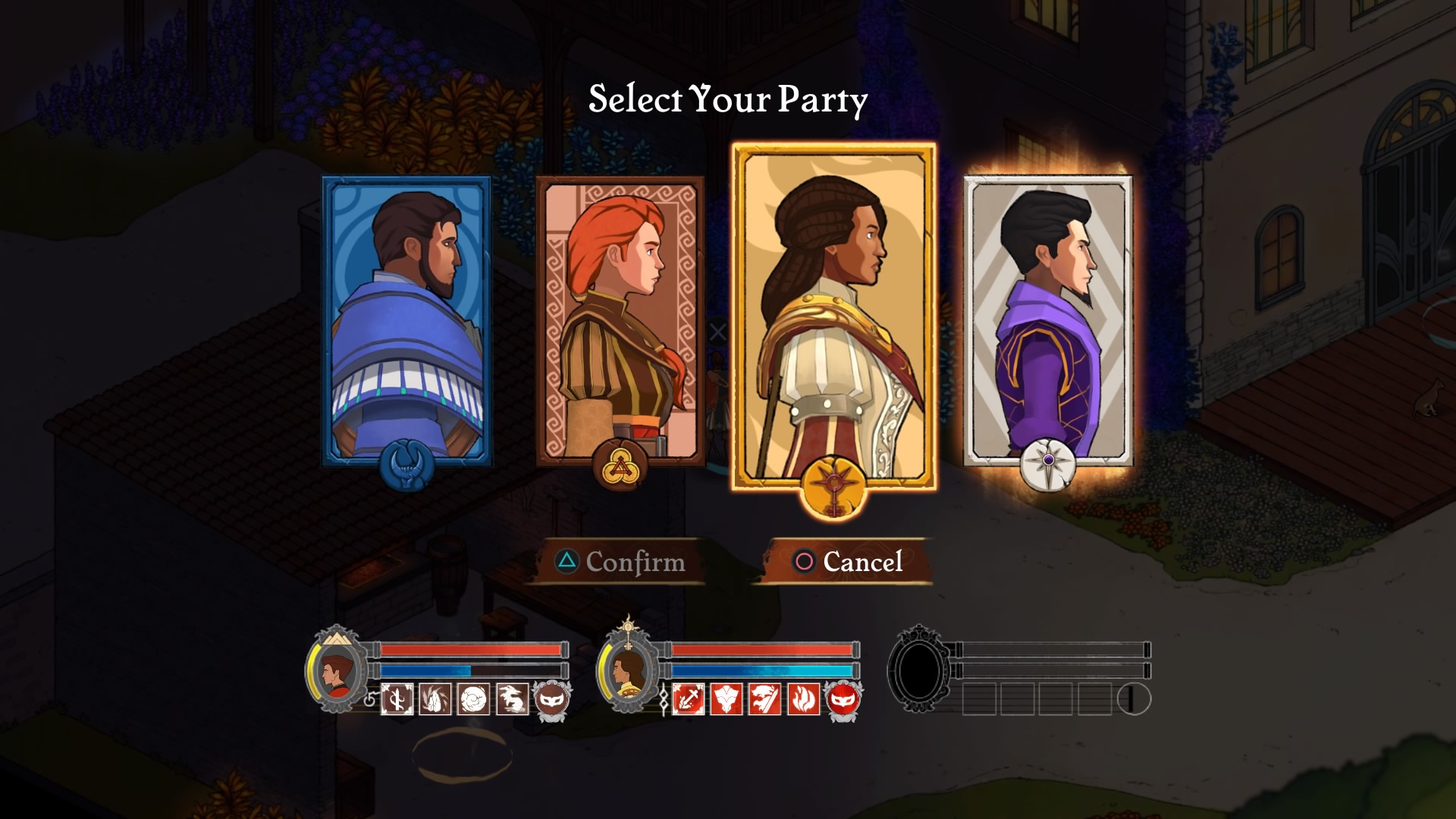 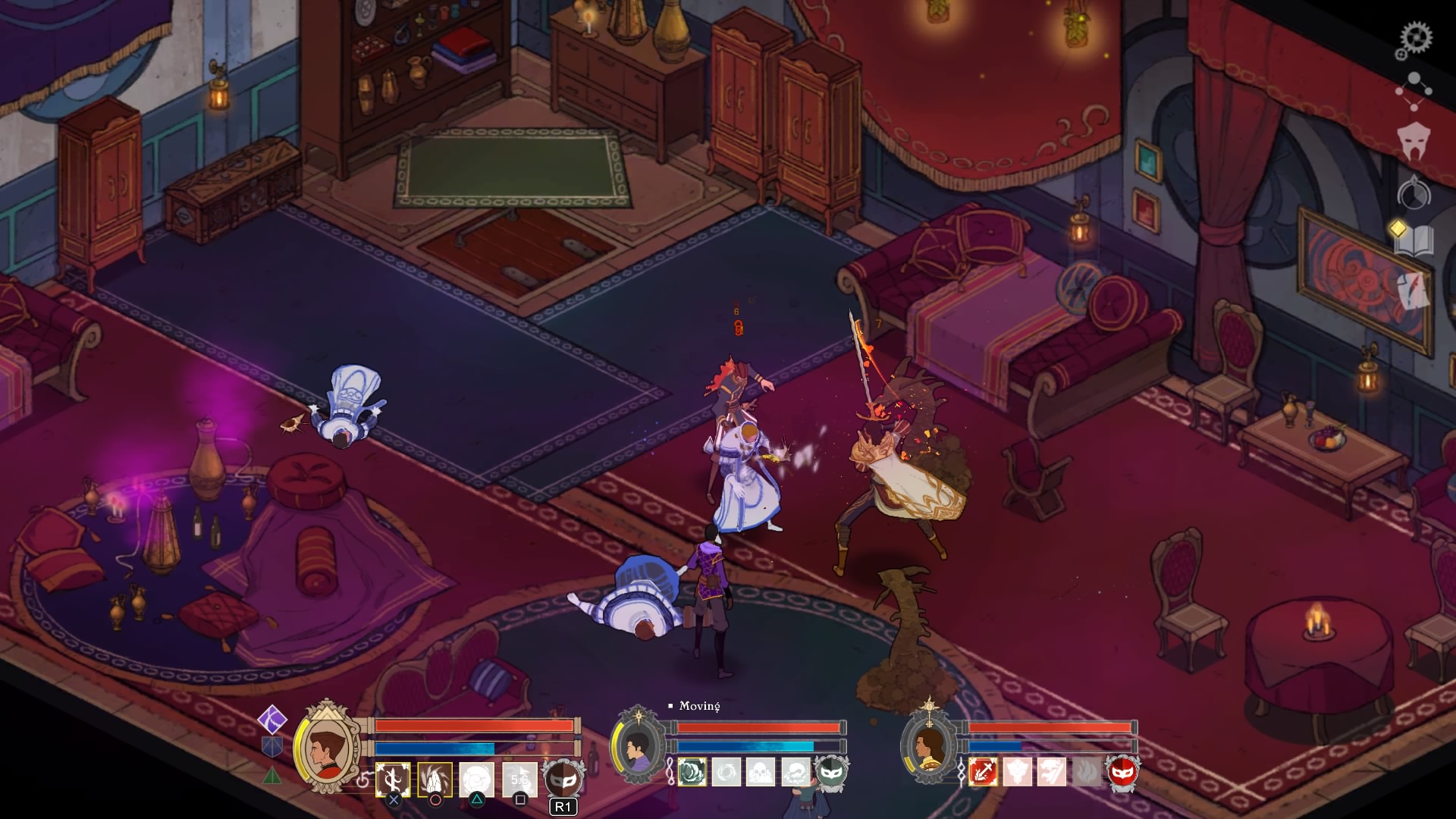 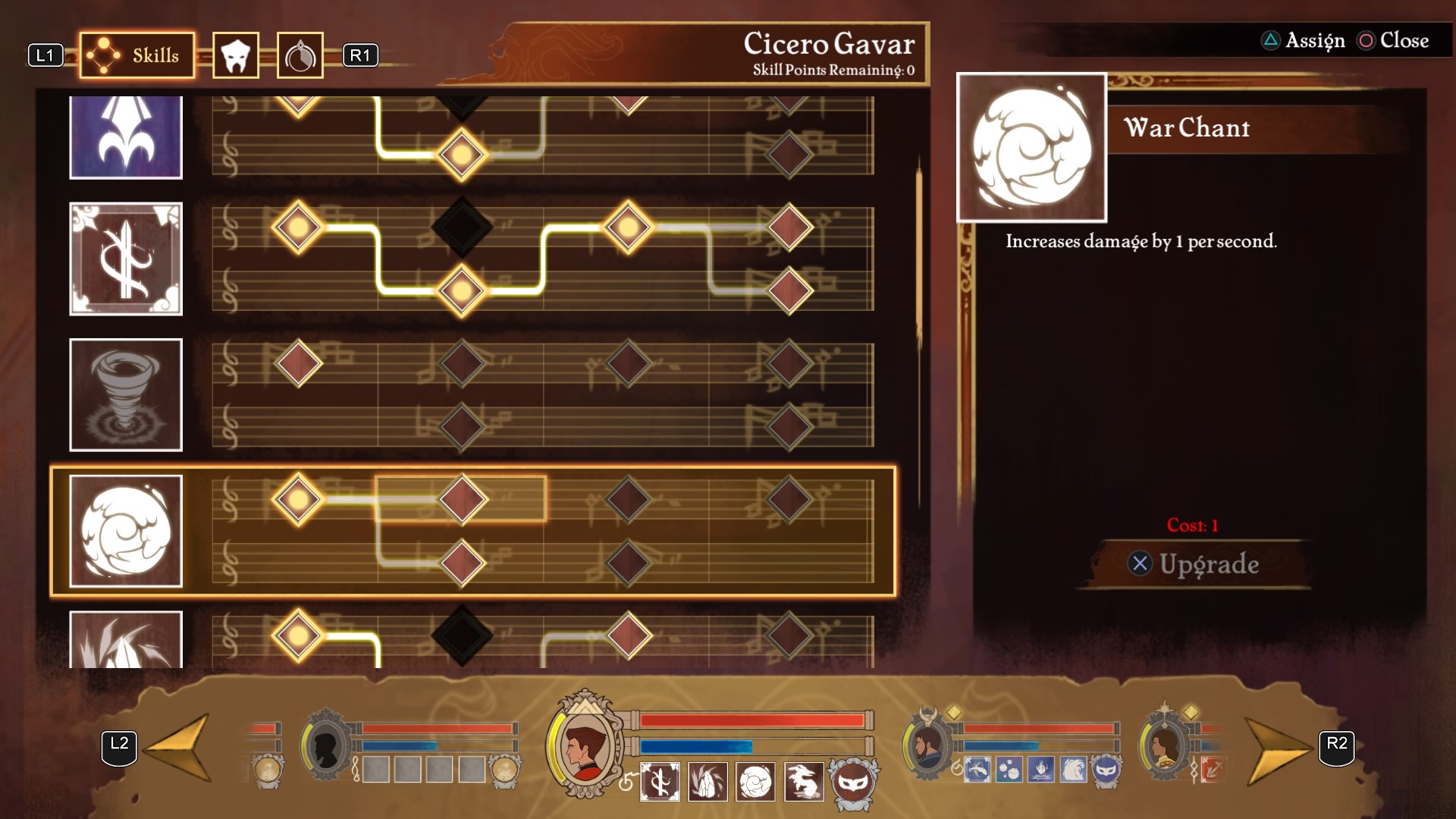 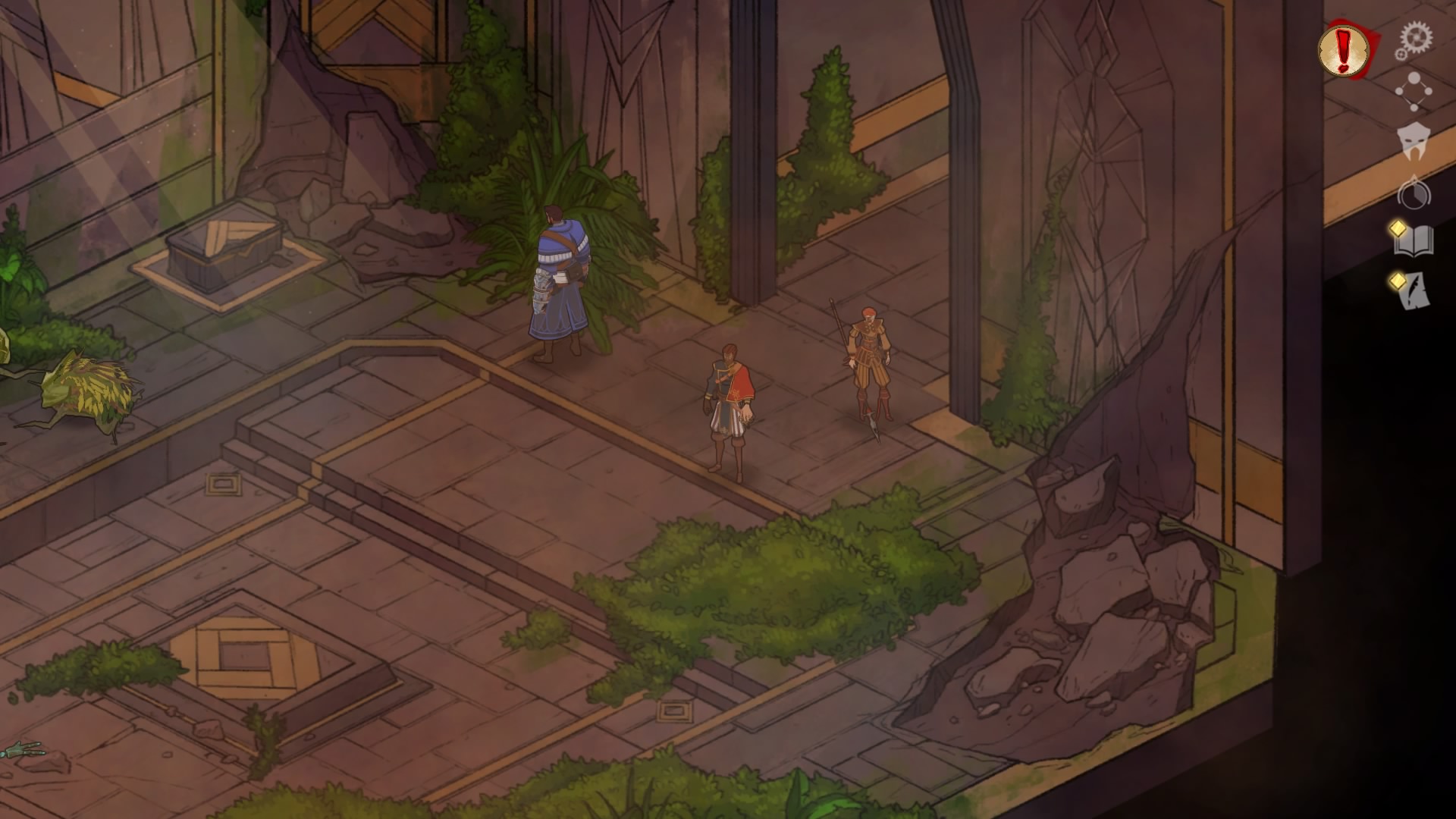 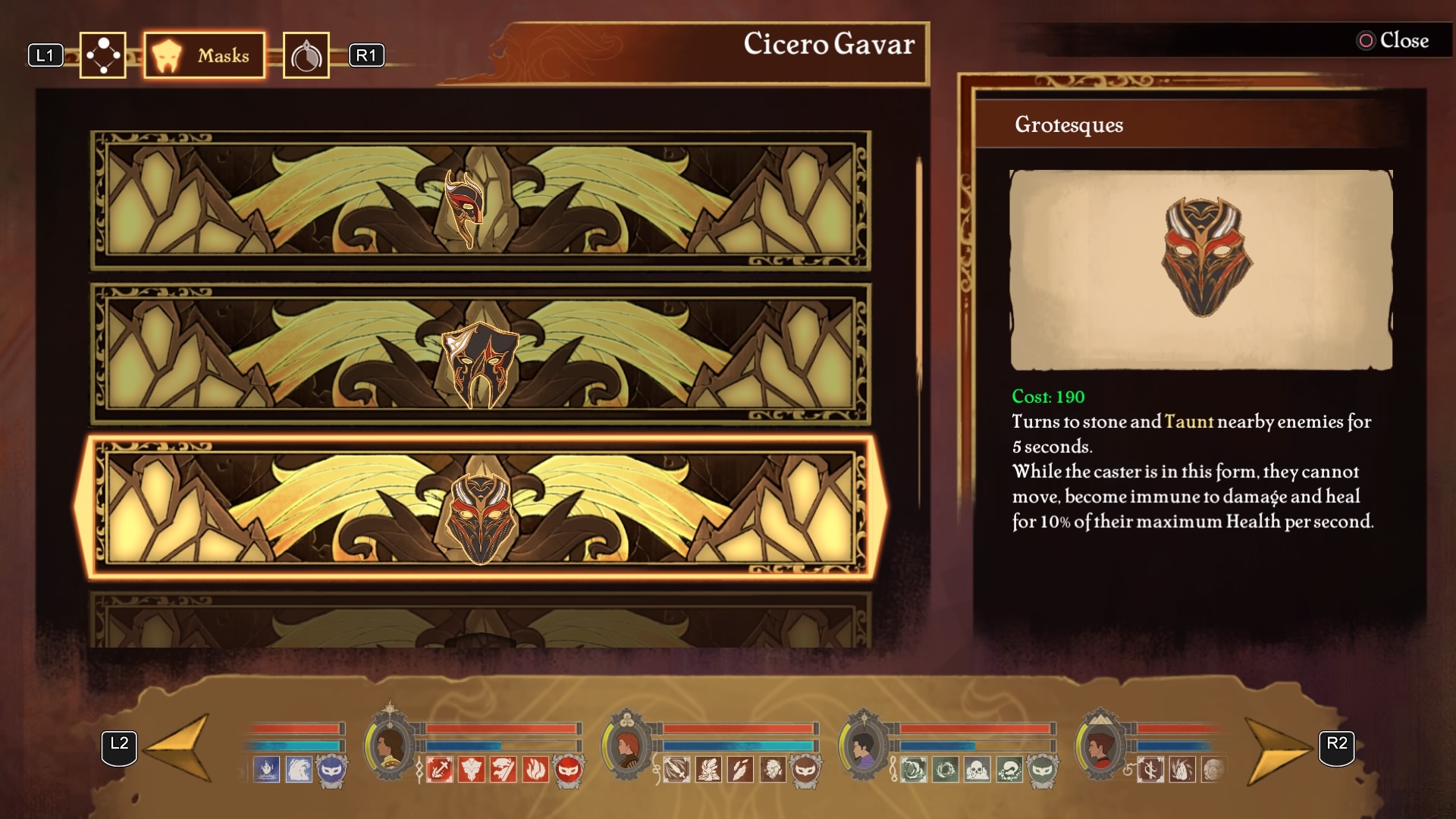 My complaints with the gameplay aside, I found that while I was playing Masquerada I was engrossed and enjoying it. I think most of all this is a testament to the world they’ve brought to life and how likeable the characters are. I was also caught quite off guard when discovering a queer character with a plot line about them and their relation to Ombre’s church. Surprisingly it was both heartbreaking and heartwarming and the character quickly became my favourite teammate.

While the less than challenging gameplay might leave hardcore RPG players asking for more, Masquerada does offer an enjoyable narrative based game set in a distinct world. I enjoyed playing and happily returned to it time and time again. Despite a slightly slow start the pace didn’t make anything feel like a chore. With a diverse cast of characters and a fairly well handled queer character I’m hoping to see more from this world. Masquerada: Shadows and Songs is out on Xbox One and PS4 on August 8th and hopefully sees enough success for a squeal that can address some of the smaller issues.