Shadow Tactics: Blades of the Shogun first released last year on PC and was well received. Now console players can also enjoy this story of sneaking and stabbing on a feudal back drop. Developed by German based Mimimi Productions  the game was awarded Best German Game, Best PC Game and Best Game Design at the 2016 German Developer Awards. What’s great is that every pixel of this game shows a love for art direction and tough but balanced gameplay. If you think you’re amazing at stealth games then Shadow Tactics is here to prove you otherwise.

Shadow Tactics’ setting is loosely based on Japan’s Edo period. A new shogun has unified Japan after years of war, but now a mysterious new warlord named Kage-sama has emerged, jeopardising the country’s stability. The shogun turns to a samurai in his service, Mugen, who recruits a team of misfits specialists to investigate Kage-sama’s growing threat and throw their plans into disarray.

But who is our team? As previously mentioned you’ll work with Mugen, a samurai; but joining him will be Hayato, a ninja; Yuki, a thief; Aiko, a spy; and Takuma, a sharpshooter. This team will come together with their specific set of skills to overcome each mission and bring stability back to the country.

Gameplay wise Shadow Tactics is broken up into 13 missions, each with its own very specific objectives ranging from eliminating targets to extracting prisoners or vital documents. Missions have a set cast that you will be able to use each round and as each character comes with specific skill-sets, it means levels are built around those specific elements.

Once in a mission, gameplay is a top down isometric stage that you’ll navigate, avoiding enemies sight lines and eliminating opposing soldiers. The characters you have in the mission will greatly change how you play. Aiko is able to utilise disguises to distract guards, Takuma is able to snipe enemies from great distances, Mugen is able to take out closely grouped foes, Yuki can place traps and lure enemies and Hayato is a nice middle ground amongst the characters. You’ll need to utilise all these skills to overcome greater numbers and enemies that if they spot you will make short work of your fairly squishy team that can only ever heal itself once.

Missions will throw a bunch of different challenges at you; night time levels lower the enemies sight range but lanterns make you easier to see, while a temple level sees a large number of innocent monks that you need to avoid as opposed to eliminate. The level that drove me to insanity was the snow level that saw enemies track you back to your hiding place, or a well placed trap.

The mix-up in stages means that even though you only have a small pool of characters with about three to four skills each, I never felt like I was using them the exact same way each time. Each mission was fun and different, however difficulty can spike suddenly and you can find yourself stuck at a single choke point that no matter what you do you can’t force your way through. This is where two of the most important parts of gameplay rear their heads.

“This throws in a whole new level of challenge; many times I would get spotted and have reinforcements arrive, deciding to reload my last save only to realise I’d been set back much further than I anticipated.”

The first is Shadow mode. By selecting this for a character you are able to allocate a single action for them; it can be to use an item, move to a location or eliminate an enemy. You aren’t required to do this for all characters at the same time so after setting one character to create a distraction you can take control of the second character, execute the shadow plan and manoeuvre the character you’re controlling once the distraction is made. This obviously becomes more and more important as your team must work as one unit to remove obstacles in one swoop.

The second is the games save mechanics. Gone are autosaves and instead welcome manual instant save. By touching the save button the game will save that moment for you, should something happen you can reload back to this, however you can only ever have three active saves. A timer will appear at the top and go from green, to yellow and finally to red to let you know how long it’s been since your last save. This throws in a whole new level of challenge; many times I would get spotted and have reinforcements arrive, deciding to reload my last save only to realise I’d been set back much further than I anticipated.

In my time with Shadow Tactics I did experience bugs on one or two occasions where enemies somehow spotted me from literally the other side of the map for seemingly no reason. However, while Shadow Tactics was difficult at times and I was left questioning my prowess in the stealth genre a lot, at no time did I feel like the game seemed unfair. Mistakes were made because of my impatience more often than not — but not always, sometimes it was 100% the cameras fault.

This game has so many things going for it… but the camera is not one of those things. The main reason for this is that the right analogue stick will pan the camera, while holding R2 on the PlayStation will rotate and zoom the camera. Often in the heat of battle I was left frantically trying to move the camera to properly see where an enemy was coming from, only to be dead long before I could even find where I had accidentally wandered off to. This, as well as a slightly uncoordinated character and item swapping system, are the only real complaints I have. 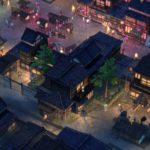 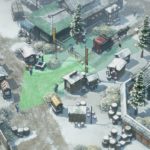 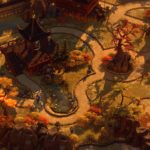 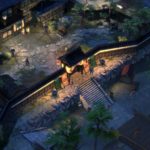 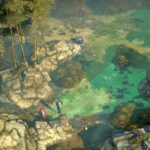 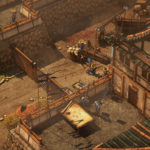 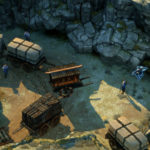 Voice acting is all very solid amongst characters and NPC alike, however Yuki once or twice had a questionable accent against her co-stars. Characters will often have banter mid-mission to properly expand on their identies and I was surprised on how well developed they made these personality traits. Mugen especially has a wonderful character arc and I loved his interaction with Aiko. While the music never particular grabbed me it all had a lovely authentic sound to it as well.

The art style is nothing revolutionary but there is some really beautiful imagery in each stage, with the back drops and lighting really gorgeous. Character are all distinct colours and shapes to make them instantly recognisable on the screen and the same can be said for enemies. Sight lines and area of effect graphics are easy to understand and feel extremely intuitive.

Shadow Tactics: Blades of the Shogun

I had a blast with Shadow Tactics: Blades of the Shogun and can’t wait to head back and make a dint in the extra challenges for each mission, although I don’t think I’ll ever achieve the speed run medal. Gameplay has a lot of variety and will have you thinking long and hard about your next move in the hopes to avoid making an enormous mess. Shadow Tactics is already available to play on PC, PS4 and Xbox One so be sure to pick it up if you’re looking for something that you can chip away at a mission or two per night.