It’s certainly no secret that I’m a fan of the Uncharted franchise. Nate’s final adventure last year checked all possible boxes when it came to crafting a compelling and memorable action-adventure experience. One of the things that has always stood out is the way Naughty Dog delicately creates its characters, and there have been several since the series inception that have stood out as being interesting enough that they would benefit from their own story. Uncharted: The Lost Legacy gives this opportunity to two badass women, Chloe Frazer and Nadine Ross, and they come together to take part in an adventure that is very familiar but also stands confidently on its own.

Chloe has always been one of my favourites, since she brought her charm and wit to Uncharted 2. An Indian-Australian treasure hunter and thief for hire, the charismatic Claudia Black is at her absolute best voicing Chloe, bringing depth, enthusiasm and attitude to bounce off of the far more stony-faced Nadine (Laura Bailey), one of the main villains in Uncharted 4. That’s not to say Nadine is without emotional beats; in fact, it’s the relationship between the two women that helps to cement this as a worthy spin-off.

The camaraderie begins purely professional, as it’s clear that there are key differences in the way each character operates. Nadine speaks with her fists, while Chloe relies on her charm and her wit to get out of sticky situations. You’ll spend the majority of the experience with the pairing, allowing for the back-and-forth banter that the series is known for to really shine through. The writing is as stellar as ever, with both sharing back-stories, thoughts on the world and imparting cultural knowledge as you travel from temple-to-temple, solving puzzles and traversing difficult, obstacle-filled climbs.

With this being the sixth Uncharted in the last decade (not including the card game spinoff, of course), The Lost Legacy certainly feels familiar, and wastes almost no time teaching you the ropes before diving into the main narrative. You’re expected to know how this works by now, though there are a couple of new mechanics like lock-picking that don’t land as confidently as others. Taking photos with Chloe’s phone at certain moments seems gimmicky at first but opens up some additional dialogue and animations that makes them worth seeking out. 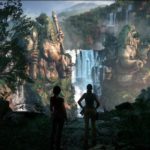 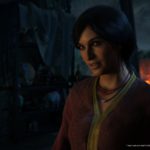 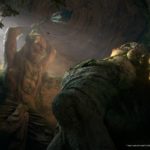 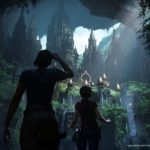 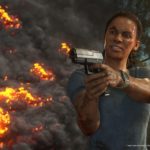 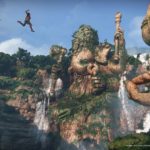 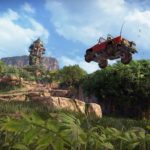 The Lost Legacy also provides the opportunity for a bit of open-world exploration, something the series is certainly not known for. Marking a map with points of interest, you can drive around from temple to temple, completing the key tasks required to move on but also solving some side-puzzles that ultimately lead to a bonus ability. You’re not required to do these additional areas, but I’d recommend you do for the benefit of your own enjoyment and to flesh out the experience.

The key points of interest are really the only things worth travelling to in this open-world section, which is where it’s a bit of a missed opportunity. I really liked the freedom of tackling things in any order I wanted, stumbling across challenges that were guarded by goons and solving clever puzzles at my leisure. It was a taste of a treasure-hunting game that I really liked, so it would have been nice if it was more detailed, with more secrets and hidden temples, a-la Rise of the Tomb Raider.

My criticisms of the game are almost exactly the minor criticisms I had of Uncharted 4, namely a need for more larger-scale puzzles and less shooting of wave-after-wave of bad guys. The combat mechanics have always been a little bit frustrating as they escalate to tougher enemies with overpowered weapons and grenades flying everywhere, but at least they aren’t usually particularly long sections.

“…drawing your eye into every little detail and distracting you with gigantic, breathtaking vistas…”

I have to talk about how gorgeous The Lost Legacy is, too. Each location is stunning, with an incredible amount of detail that has become the trademark for the series. India’s jungles and ruinous landscapes are incredible to wander around in, often causing me to stop and just enjoy the view. Naughty Dog have proven to be king of their craft when it comes to drawing your eye into every little detail and distracting you with gigantic, breathtaking vistas, and this is no exception. 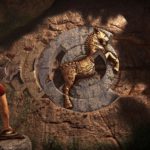 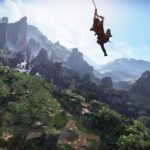 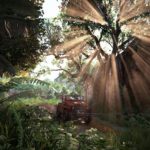 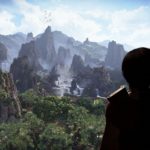 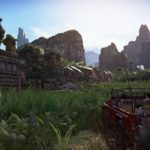 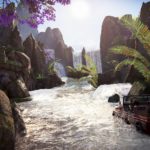 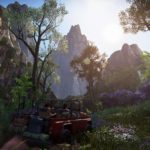 Big action movie set-pieces are back, and remained thrilling throughout, often having you feel like every jump and flying piece of debris could easily be your last as you triumphantly escape with your life. It’s another masterful touch that remains some of the most exciting and enjoyable gaming moments I’ve had all year.

Your enjoyment here is going to get different levels of mileage depending on your love of the Uncharted franchise. Getting to know Chloe and Nadine was a delight and at no point did I even consider the charismatic Nathan Drake and what he was up to. The issue is that there isn’t anything particularly new feeling about The Lost Legacy. No moments that I truly felt were 100% unique, with puzzle, platforming and action sequences that are purely fun to play, but not raising the bar any higher than A Thief’s End. I didn’t find this too problematic, as I loved every moment to be honest, but I can see how gamers looking for an entirely fresh-feeling action adventure game could come away a little disappointed.

Uncharted: The Lost Legacy is familiar but incredibly captivating thanks to its two strong female leads. The chemistry and banter is perhaps the strongest it’s ever been here, with more emotional complexity to both characters than I was expecting, and I’m very thankful for it. Even though it doesn’t reinvent the wheel, I found the combination of gorgeous visuals, seamless platforming, tricky puzzle-solving and engaging characters to be incredibly worthwhile. I truly hope this isn’t the last adventure we’ve seen with the lovable, sarcastic Chloe and the enigmatic, tough-as-nails Nadine, as I want to spend a lot more time with both of them in this fantastic universe.