Ark: Survival Evolved is as brutal as it is tedious.  This action survival game promises and gives a lot, but you need to work for it.

Growing up as a child of the 80s, I was a huge fan of the cartoon Dino-Riders.  Sure, the show was a bit basic, but the toys were quite amazing, and one of my most prized toys growing up was my Quetzalcoatlus with its rider Yungstar.  But who cared about the rider really – it was all about the dinosaurs.  And I wanted to ride a dinosaur.

So, when first hearing about Ark: Survival Evolved back in 2014, I was already its target clientele.  Unlike many though, I didn’t participate in the Early Access period and patiently waited for the fully developed game to be released for my dino riding pleasure. Did I say this game was about riding dinosaurs?  Eventually yes, but even then, it is not the focus of the game.  No, this game is about survival, and all the action and tedium that can bring.

You start off by creating your male or female survivor and can choose a look that ranges from a Neanderthal to Robinson Crusoe. Then you start surviving.  No introduction other than your character looking at your arms with a mysterious device embedded in one. Controls? No, there is no tutorial, you are alone in what looks to be a mash-up of several prehistoric eras with a bit of fantasy and futuristic citadels thrown in for good measure.

Did I say alone? Well alone until a dinosaur or beast starts attacking you.  Almost anything you can imagine Ark having, it seems to have, from blinding Dilophosauruses and giant bees to, let’s just say certain fire breathing mythological creatures if you proceed far enough into the game. 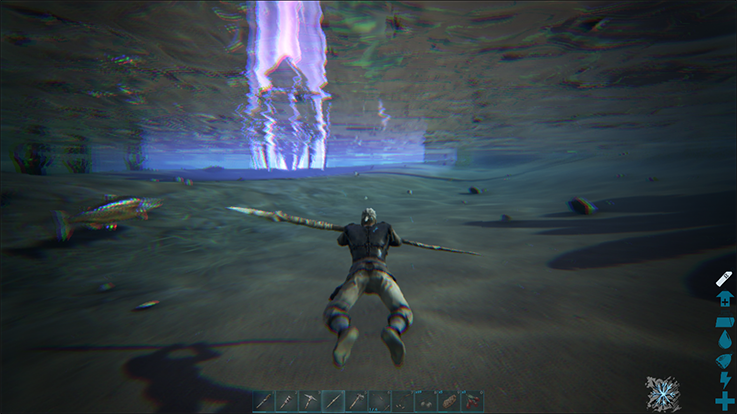 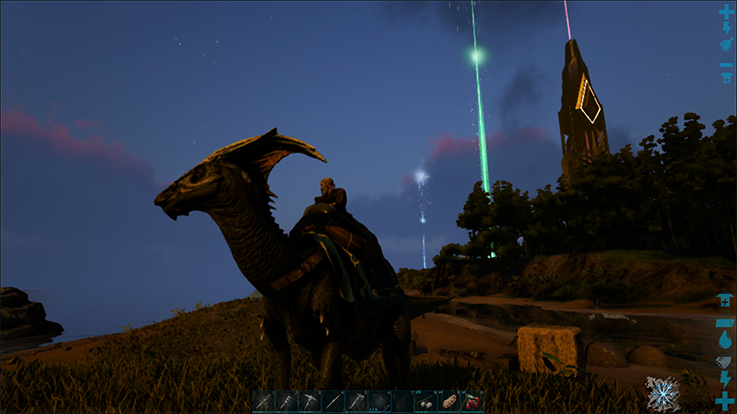 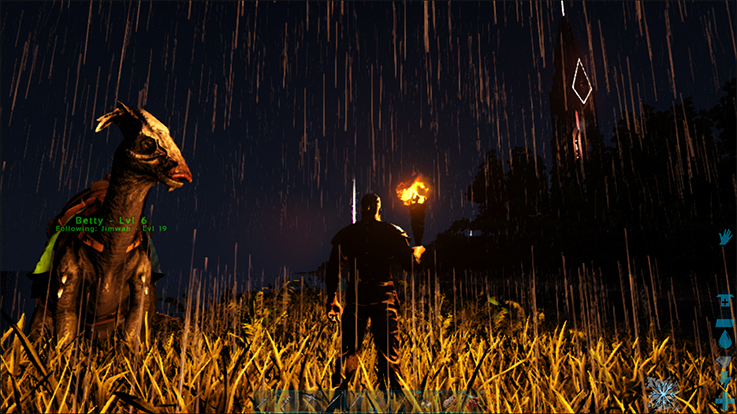 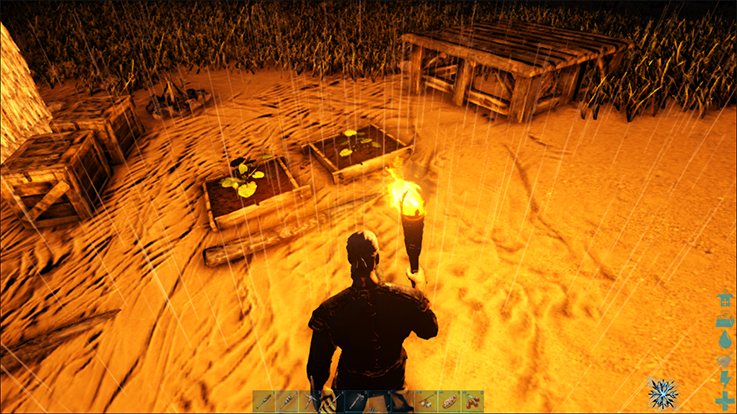 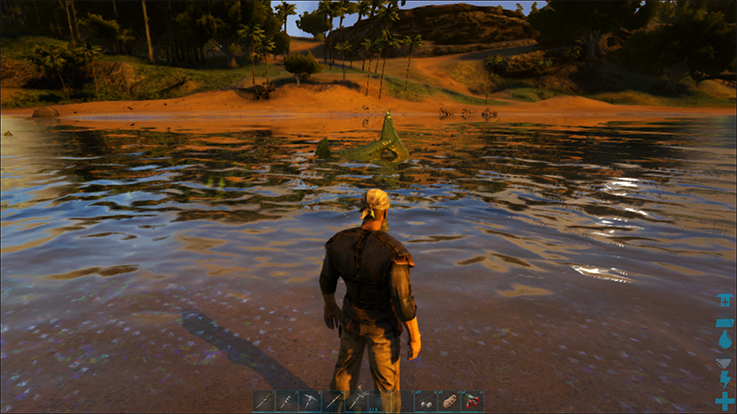 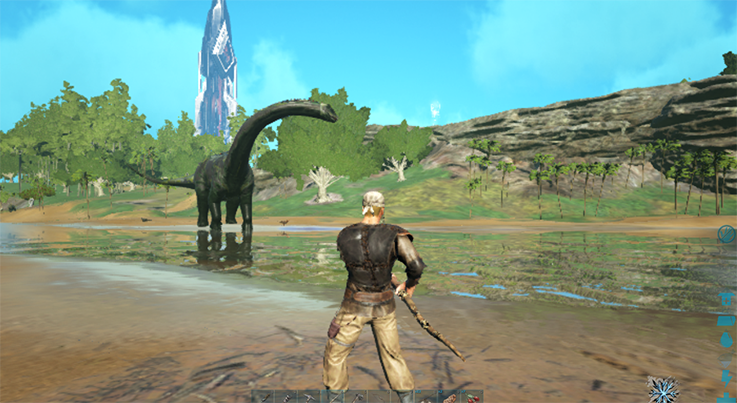 While the action parts of the game are quite thrilling, this is a survival game. With only a few possessions you must forge tools to scavenge food, eating as many berries as you can before you die of starvation.  As much as you need to eat and drink, you need to create weapons to defend yourself.  You must also make your own clothes, build a shelter against the elements, farm food, and think about such things like collecting dinosaur poop for fertiliser and planning irrigation pipes and dodo farms long before you can even think about riding a dinosaur. Yes, your dream and mine of being atop a raptor or Tyrannosaurus rex with a gun blazing is possible, but will take a very, very long time.

“I never knew dinosaurs could have Stockholm Syndrome until now.”

And the glory is lessened somewhat by the method you need to take to domesticate your pet which can include tying it up, knocking it out and feeding it narcotic substances.  I never knew dinosaurs could have Stockholm Syndrome until now.  Oh and do not get too attached… domestic dinosaurs are easy prey.

As you may have guessed, with the many, many ways you can die, you will certainly die in Ark – a lot. This is your first hint to the overall plot as you are respawn in a random location, minus your equipment but still sporting that growing beard and your experience and skills.  If you are quick enough you can even find your old corpse and collect possessions.  Or someone elses.

There are a few ways to play Ark, each with its own challenges.  You can play cooperatively with other players against the environment, player vs player, or in a single player mode to explore more of the game’s storyline.  The technology tree however prevents you from learning every skill, so your choices do shape how your game will develop.

I have not mentioned much of the storyline as there really isn’t much to it.  It was quite disappointing that such an in-depth and detailed game can have such a basic story arc.  Then again, the game is designed for multiplayer, for people to form communities or strive for conquest, and the ability to include mods and pretty much customise every element of the game makes this more a sandbox-type game where creation is the goal.

The music is fairly standard for such a game, and if you can ignore the occasional choppiness, annoying controls, server issues, and weird bugs such as dinosaurs getting stuck in trees, Ark is a beautiful game.  In particular, the transition from day to night brings with it the sense of danger as many predators come out to hunt.  Underwater, the game is simply breathtaking, filled with dinosaurs and prehistoric versions of sharks looking to eat you, and for good measure, giant piranhas – because why not?

Ark: Survival Evolved sounds like a large and complex game because it is.  Be warned, playing this game is a huge investment of time. And while the time invested does pay off with some pretty cool features – I have to question the overall pace and lack of story that to be honest are major letdowns.  It is game of endurance and survival for the player as much as it is for the character you control.

To describe Ark: Survival Evolved simply would be that it is a game of trial and error.  With no instruction, you either need to slowly test things yourself or resort to wikis and message boards.  It is also a game of many trials and many errors. Although the ‘end game’ rewards will keep many players going, you will soon learn the comparative time it takes to do certain menial tasks becomes the bulk of the entire experience.  Ark is destined to have a cult following consumed for some time to come, however as a gamer who does not wish to commit so fully to a single title, I say this game is good and addictive, but not great or an all-time classic.