Check out PART ONE of our Destiny 2 Review in Progress HERE.

And then be sure to check our PART TWO of our Review in Progress HERE.

So far I’ve talked about starting out in Destiny 2, the story, the general gameplay, portions of the end game and how community is playing a much larger part of the Destiny 2 framework. From here on our we are going to be dipping our toes into some very spoiler-ish content — it’s unavoidable and you’ve been warned. I’ve taken my first dive into the first raid, Leviathan, and had my face dragged up and down The Trials of the Nine by players much more skilled than I.

But where is Destiny 2 going and is this the game we thought it was when we started playing?

Destiny has made a name for itself with its fun and frenetic raids. Coming off the back of Wrath of the Machine, the final raid for the original Destiny, I was pretty excited. Wrath of the Machine was something I thoroughly enjoyed and it had some jaw-dropping moments and fun mechanics without ever feeling unfair. The first raid from Bungie that appeared in the release of the franchise suffered from not being very approachable. Reaching the required power level to even make an impact on the raid made it an uphill climb for quite some time. Thankfully Bungie learnt from that and subsequent raids, including the Destiny 2 entry Leviathan, have been a lot easier to get into if you can put together a 6 guardian team.

First things first, let’s get this out of the way. I have not finished the raid yet and I am not ashamed. Leviathan has proven to be a slightly different take on the tried and tested formula. While gameplay is still focused on coordinating your six man team with some interesting mechanics, gone are the “room after room” of boss battles. Instead we have challenge rooms presented to us by our host, Emperor Callus who also acts himself as the final and only boss fight — in a way.

Leviathan is the first raid to feature voice acting with dialog and cutscenes and that opening shot as you and your fellow guardians land at the rather monuments entrance to Callus’ palace of exile. Being greeted by passive enemies can be a little unnerving and the slightly trigger happy teammate in your fire team will quickly turn the enemies on you. One you make inside the palace the first thing thing you’ll realise is that unlike previous raids Leviathan doesn’t offer the same continuously forward momentum we are accustomed to.

Instead you will find yourself traveling to three different challenge rooms off of a main hub room: The Baths, The Gauntlet and The Pleasure Gardens. Each room has very different mechanics that will send an unorganised team for a real loop. Also I am that guy who really enjoyed the challenge of The Pleasure Gardens; it’s a really different game mechanic and is so reliant on good communication skills. Once you’ve cycled through the three rooms you’ll open up your path to meet your gracious host.

This modular room clearing has already proven with this weekly reset that the order in which you complete tasks will be changed, while week one saw you begin in The Baths, week 2 opened with The Pleasure Gardens. This mixes up your approach each week which is a lot of fun. Also a great little treat is the secret entrance that lets you go from the opulent halls of the challenges to the dank hallways of the underbelly of the palace. Moving through trash rooms, staff quarters, irrigation systems and a labyrinth network of pipes, you can unlock secret chests, but also move between the challenge rooms. It’s a great little addition that will lead to plenty of arguments as everyone insists we should have taken a left at the hallway of whirling death fans.

Not long after the Raid dropped however we got our first look at the Trials of The Nine, taking over for the predecessors Trials of Osiris. This is where the truly competitive PVP players go to test their skills. The setup is simple; win seven games to rake in the big bucks but lose three games and you are back to square one. To make things even more fun, gear and powers are locked and respawns are in the trash. Teammates will still be able to revive however there will be a cooldown before you are able to do so and even those will have a limited use.

Our first week saw us flung to the far reaches of space in a mysterious location to take on the Countdown game mode. With so many things that players need to stay aware of I’m not sure if the added stress of the bomb defending and disarming was the best way to introduce Trials of The Nine. I am in no way amazing at PVP but I’m competent enough, however launching into match after match of teams who have completed a seven win run sometimes three times already can be… sobering. I’m not sure if matchmaking is a better option then randomly pairing teams against each other but I would say that the matches that actually felt even were by far the best fun.

“Hit all seven wins though and you’ll get to visit a second location within The Spire and things get really weird.”

One win will open up the new social space,The Spire, where you’ll meet the enigmatic Emissary who has raised more questions then answers. Hit all seven wins though and you’ll get to visit a second location within The Spire and things get really weird. While the second week of Trials is yet to begin it has been confirmed to be Survival. I think this would have been a better way to start things off so that people wouldn’t get to overwhelmed and scared away in the first week of competition. Regardless, the opening to the new Trials is worth any price of admission but make sure you’ve equipped an emote that you love.

We’re still waiting on one last release with the Faction Rally and eventually Iron Banner but until that releases in the coming weeks this is the content we have to work with right now. Unfortunately, this early on with a small pool of Strikes and missions means that eventually your end game will feel a little repetitive, but nothing compared to Destiny’s initial release.

So how does Destiny 2 shape up two weeks in? Many of the positives I have spoken about do still exist. The clan system is a fantastic addition but small errors and glitches do still exist in the game. The debacle with broken modifiers on Nightfall seems like an error that never should have reached the final product. That the broken modifier was rolled into a second week because it’s replacement modifier was even more damaging to the game is just mind-boggling.

Nothing can change the fact that the game is still fun to play just exploring the maps — although Io feels fairly unloved and could use much more action. Thankfully we are already aware of the next DLC coming for the series with Curse of Osiris which will also introduce Mercury as an explorable map.

Osiris has been a figure of mystery for the last few years for any fans of the series so the chance to meet him and possibly learn about his connection with Elis Morn and The Reef is exciting. Our second expansion we don’t know anything about except for the fact that the logo is for the ancient AI warming, Rasputin, another figure from Destiny history.

In terms of story, the final battle with Ghaul seemed fitting as he took on the power of the light he had taken by force. The death of The Speaker was vague and could have been handled better but demise was fitting for his character arc. The biggest shakeup for future instalments though is that as the final battle with Ghaul comes to an end, The Traveller awakens from his long slumber to defeat the tyrant. How this will effect future stories is unsure but it opens up a new post story social space along the wall under the awakened deity. All of your vendors will join you in the space which unfortunately makes The Farm a fairly empty and pointless place in the end. 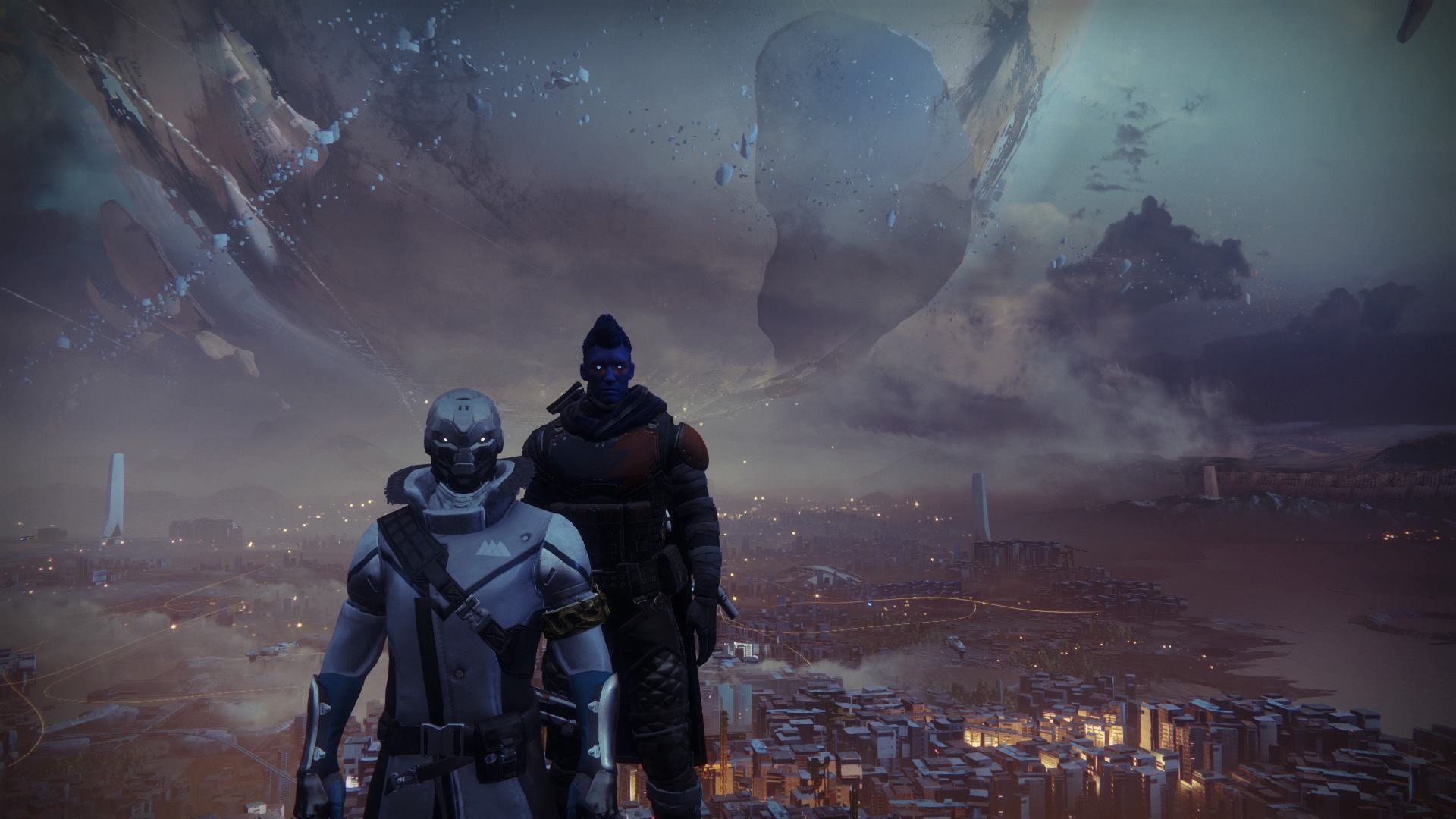 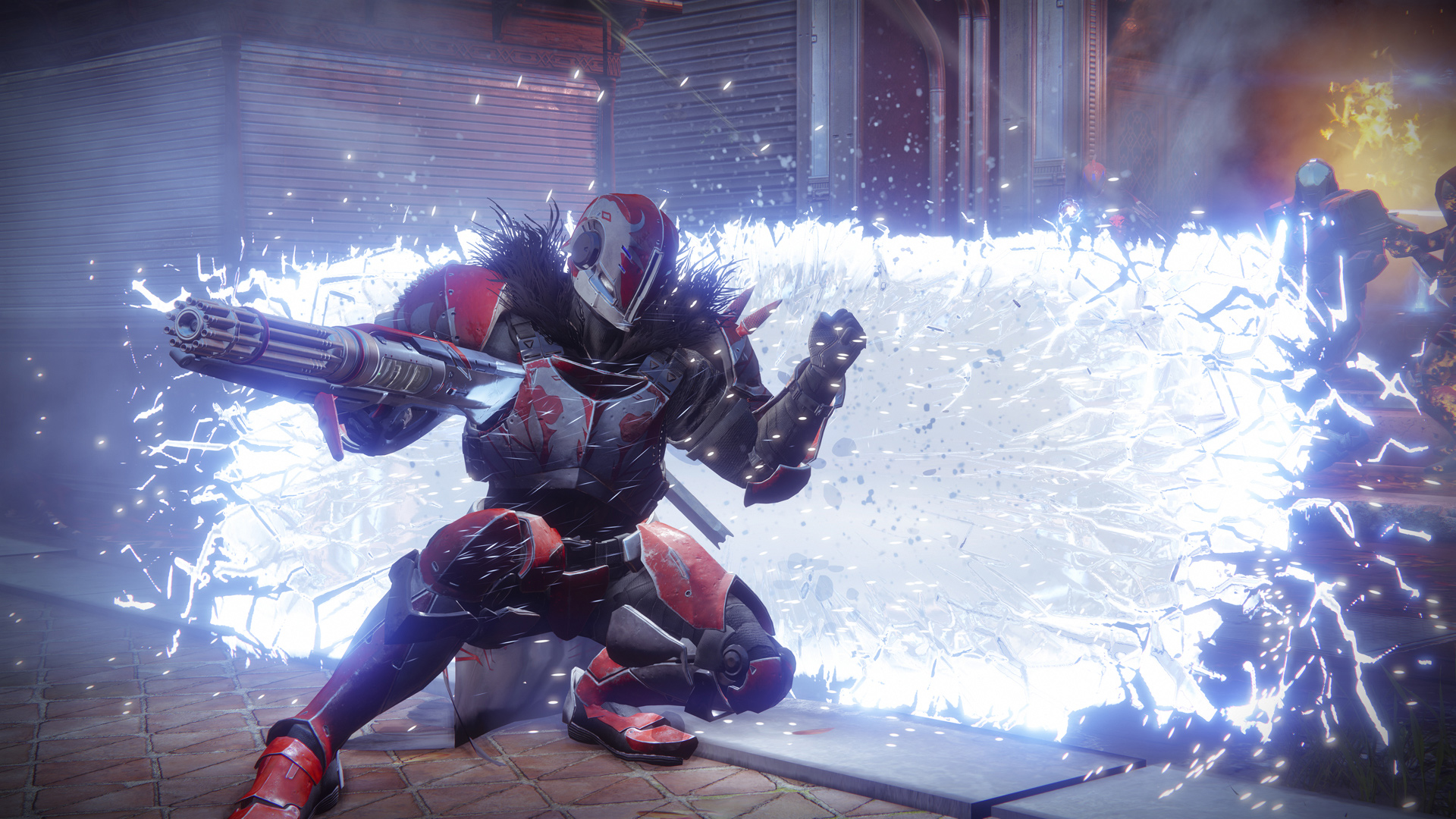 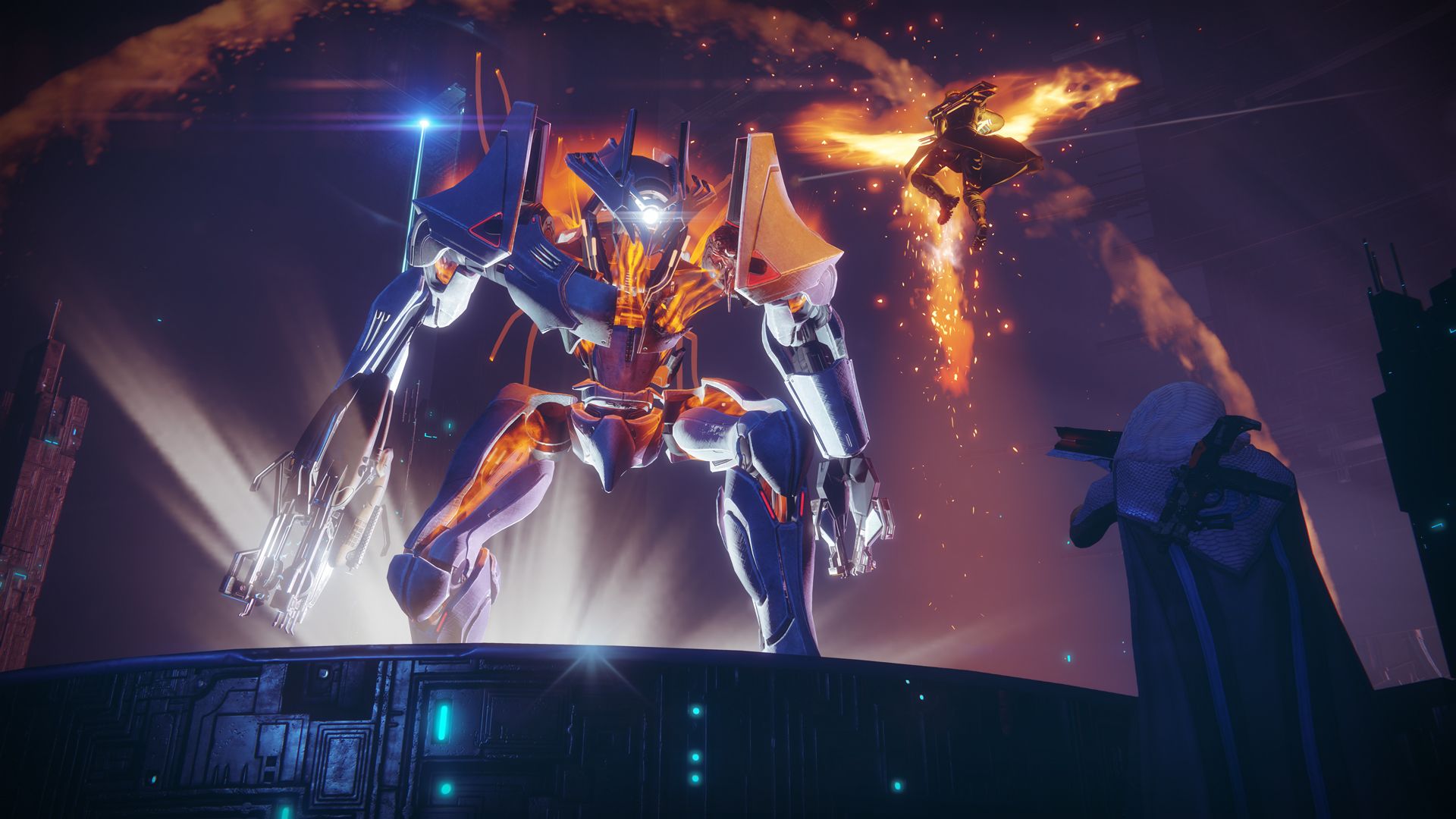 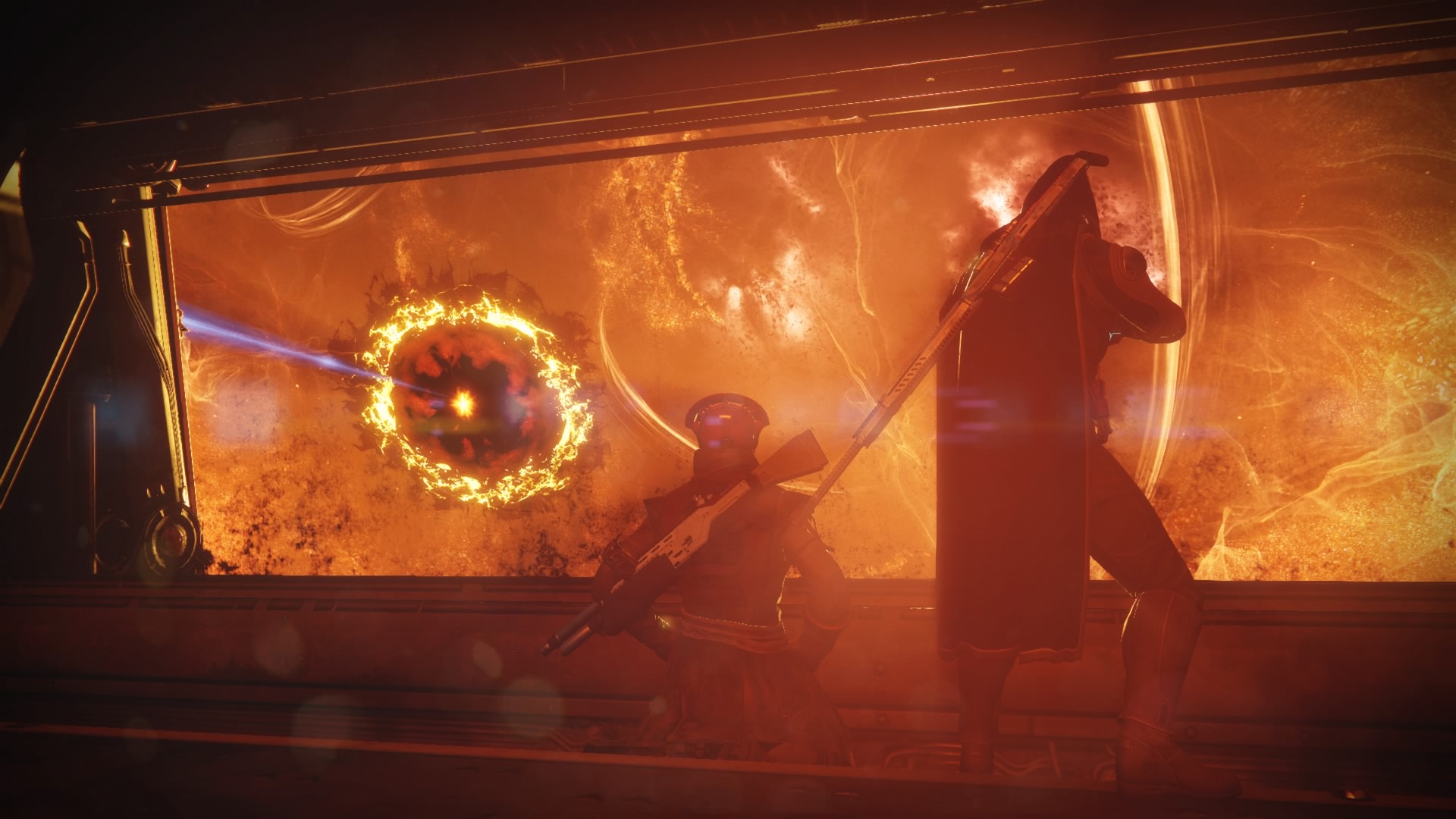 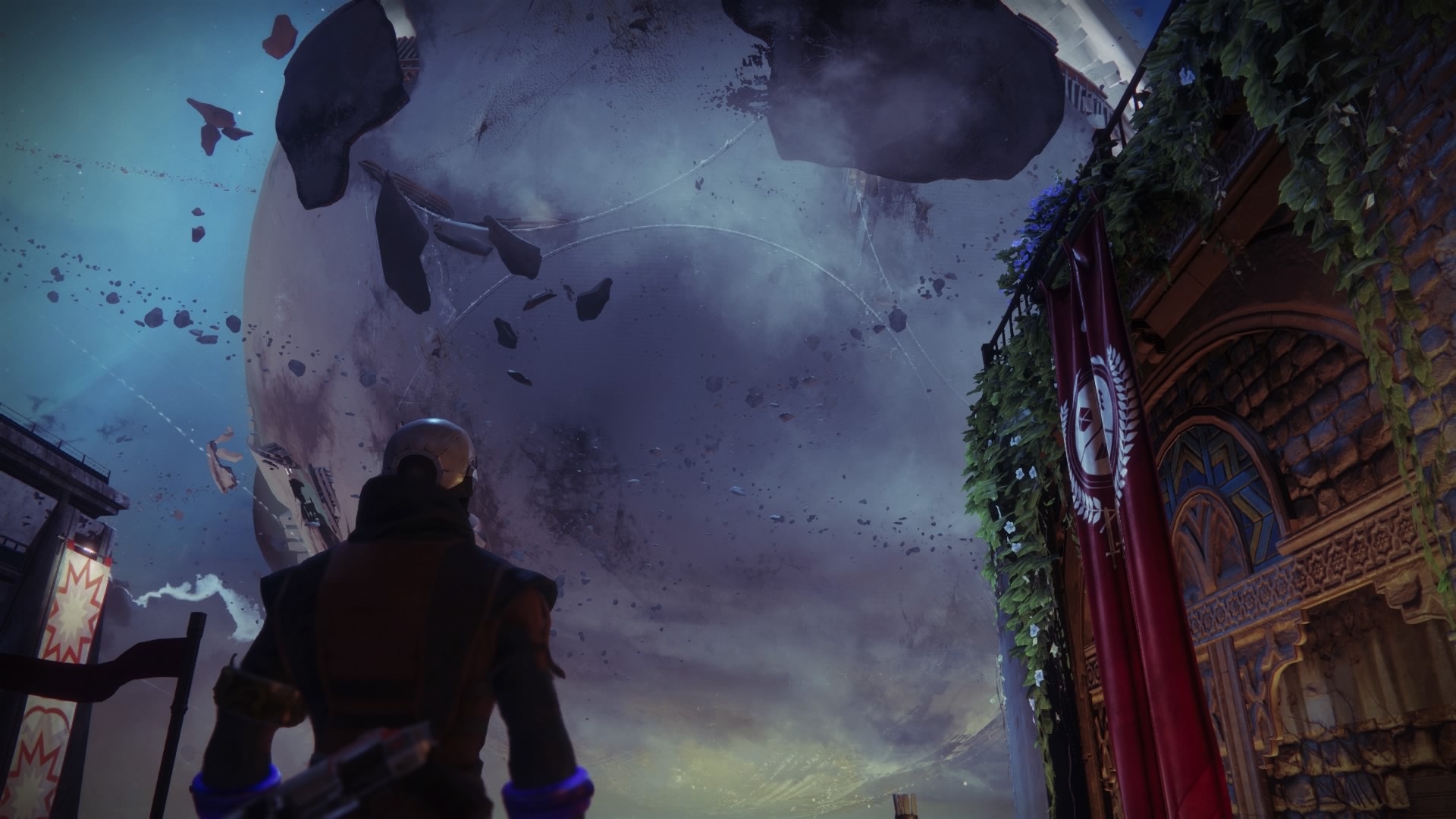 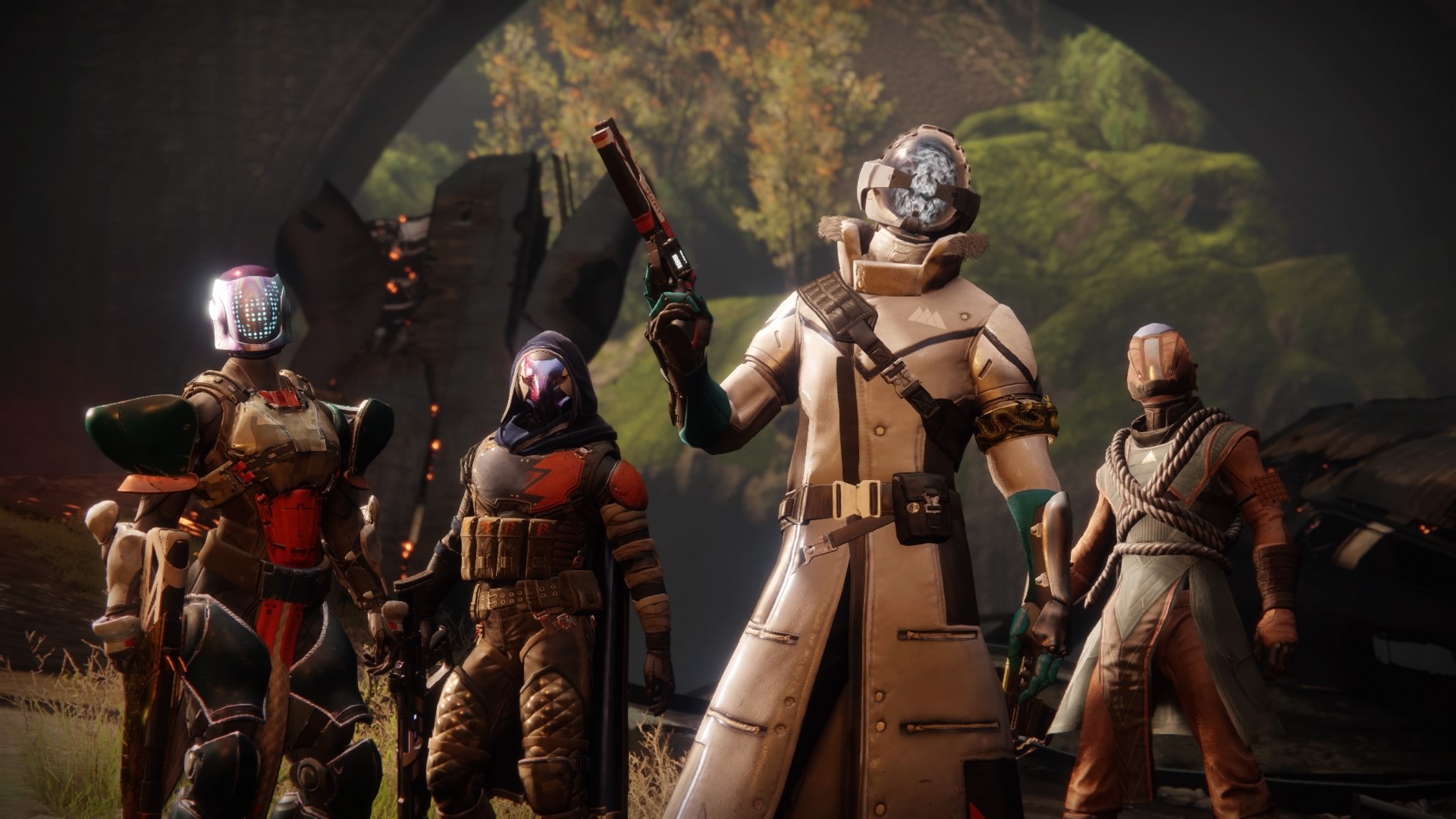 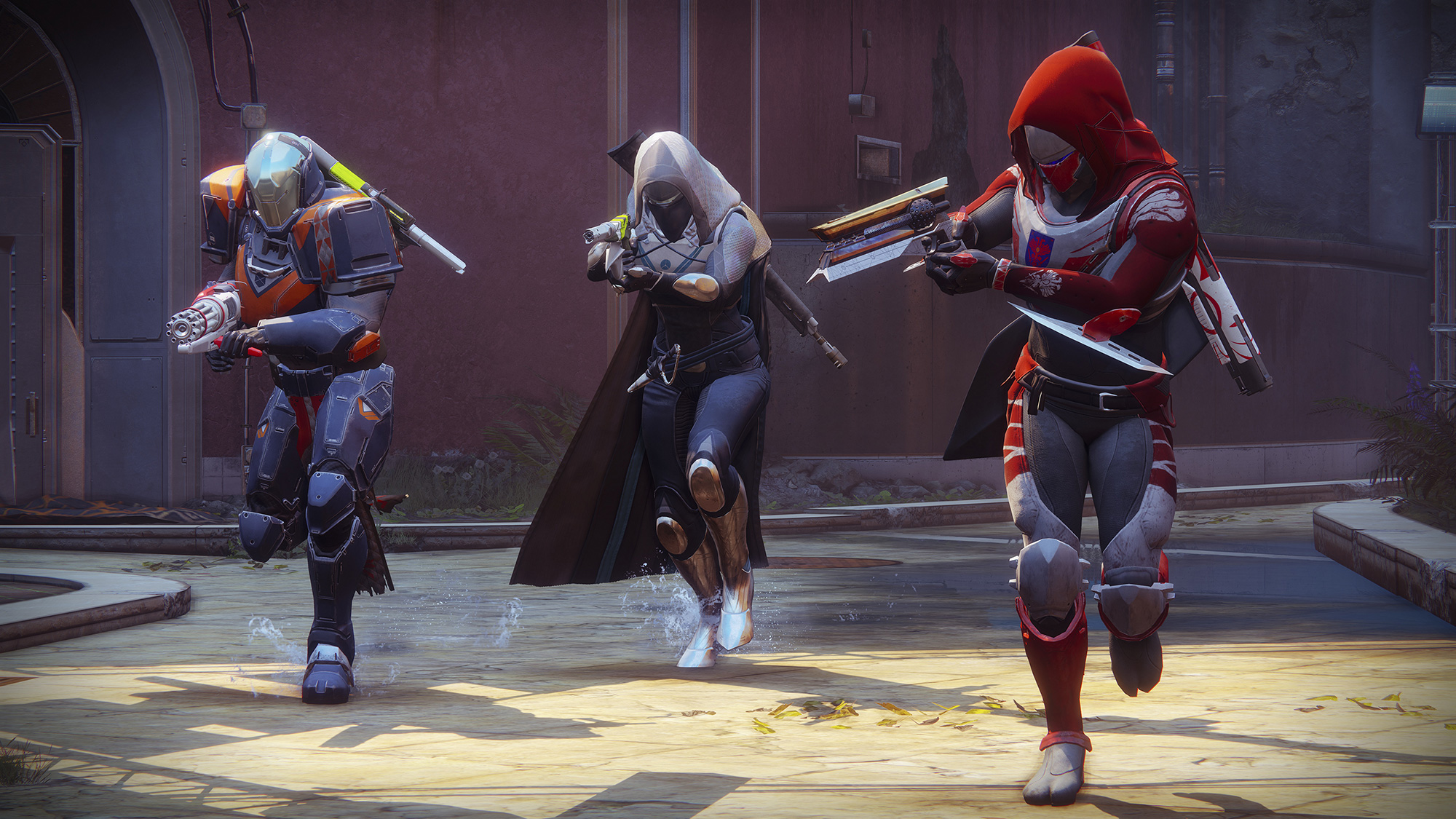 While the new massive social space is buzzing with life and sports a gorgeous view of The Traveller, the end of the story also offered up one more tidbit for fans. A post-credits scene showed the spreading of the Travellers light as it left our solar system passing over planets and stars. Eventually we see it cross shapes in dark space that begin to emit light and return to life. Longtime fans of the series will recognise these ships from concept art for a fifth yet to be seen species, the art first being shown when Destiny was first announced 5 year ago.

It shows exciting things for the future, but there falls maybe one of the shortcomings of the second instalment. There is certainly enough to keep you busy but I am once again left feeling I’ve reached a little bit of a grind pretty quickly. In saying that though I’ve never known a game to have such an addictive grind; I find myself consistently saying “just one more strike” or “just one more Public Event” and that is genuinely a good sign for a game like this.

Ahead of its October 24th release on PC, hopefully Bungie make the necessary patches to fix bugs and balance one or two guns. They’ve had no problem doing this in the past though and they seem to keep an eye out on the things that bother the majority of players.

At the end of everything I can recommend Destiny 2, but I can almost definitely only recommend playing with people. Playing alone you will quickly run dry on enjoyment as the grind can start to wear on your patience. Find a clan, play with friends and make new ones — it is the best way to experience this game. Now excuse me — I’m going to fit in one more Strike before I finish for the night.