Everybody’s Golf is just delightful to play. I want to get that out there before I start this review because there are some issues that must be addressed. As a game, however, it is so satisfyingly simple and engaging that, despite its flaws, I consider it to be one of the greatest sports titles in recent memory. It’s not the most pretty, innovative, or genre-defining game, but it satisfies a hunger and scratches an itch and I am so glad it came when it did.

Now, with that disclaimer out of the way, let’s get to it. Golf is a sport I have only dabbled in both in the real world and in game form. I’ve had a crack at Mario Golf, a few PGA titles, and a handful of mobile golf simulators. In all of these, bar Mario, I yearned for something simpler and more rudimentary. Even the mobile titles got convoluted and messy with different modes, skill shots, and systems that just didn’t grab me. Everybody’s Golf strips back all the noise and brings to the player a simplified, streamlined golfing experience. Progression is natural, the learning curve steady, and the difficulty balanced as you rank up so you never truly feel at a disadvantage or too ahead of the competition. That said, I always felt suitably challenged every time I went up a rank and played my first tournament at that level.

Progression through the single player campaign is played through the aforementioned tournaments, earning XP and challenging boss golfers for loot and access to higher ranks. Each tournament comes with different rules and modifiers, but the basic gameplay premise is consistent: score as far below par as possible. Consistently hitting birdies (1 below par) and eagles (2 below par) can unlock secret bosses to verse and unlock a variety of awards and cosmetics, which was a nice surprise and definitely fueled the fire to continually score low. I’ve included screenshots of my own victorious shots below to prove I am not terrible (and show off those sweet trophies). Herein lies one of the game’s issues with direction: this gameplay mode alone would have been sufficient. Instead of focusing on this single player campaign, Everybody’s Golf has gone on to shoe-horn in other gameplay modes that simply fall by the wayside and don’t add up to the depth of the tournaments. 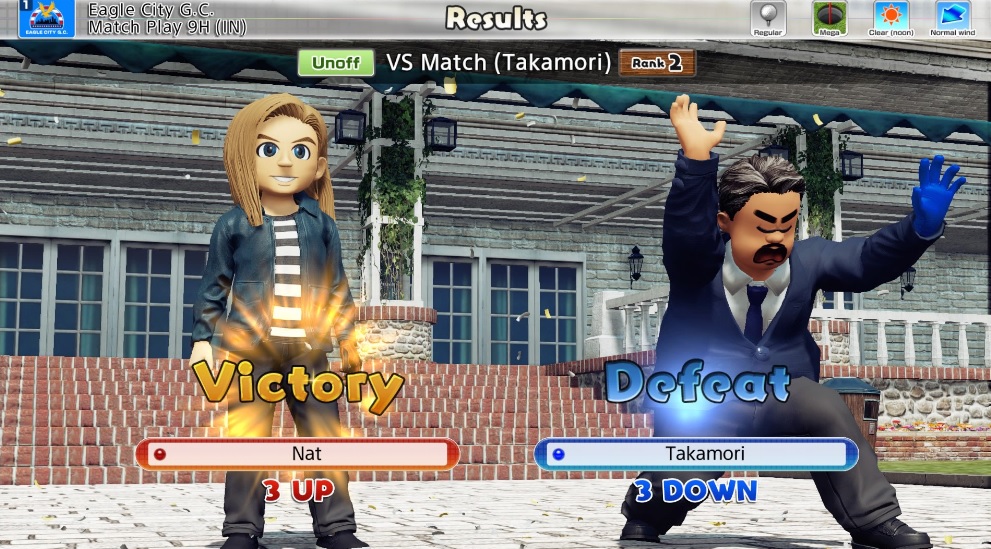 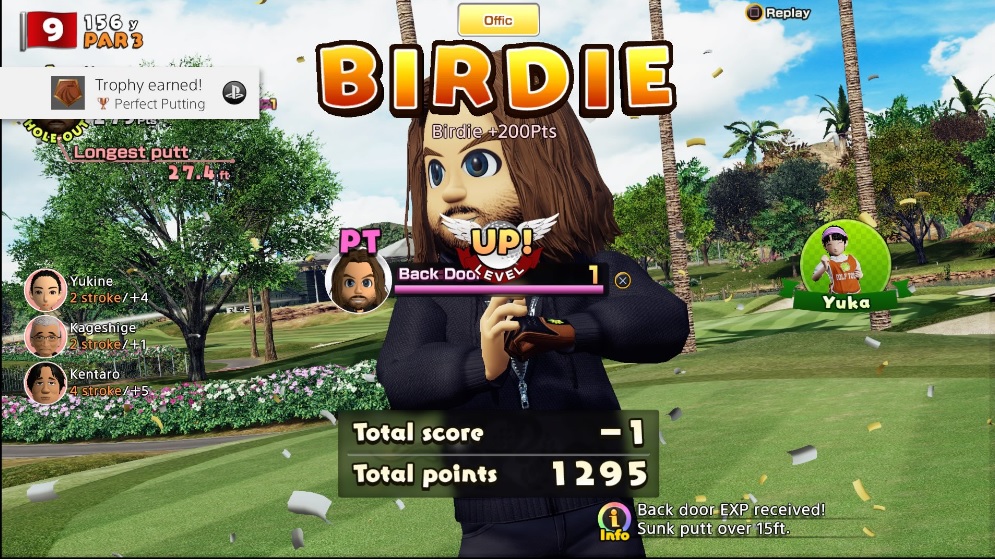 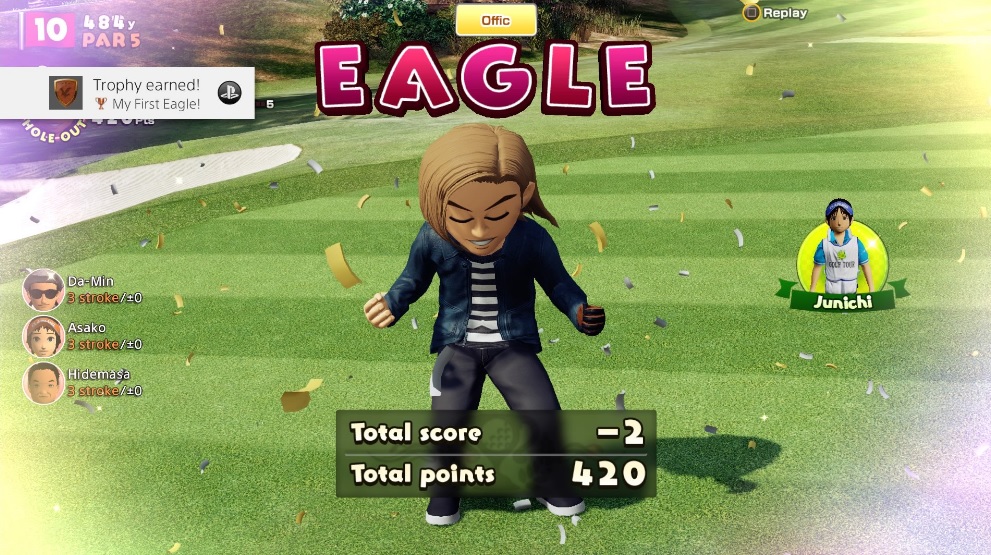 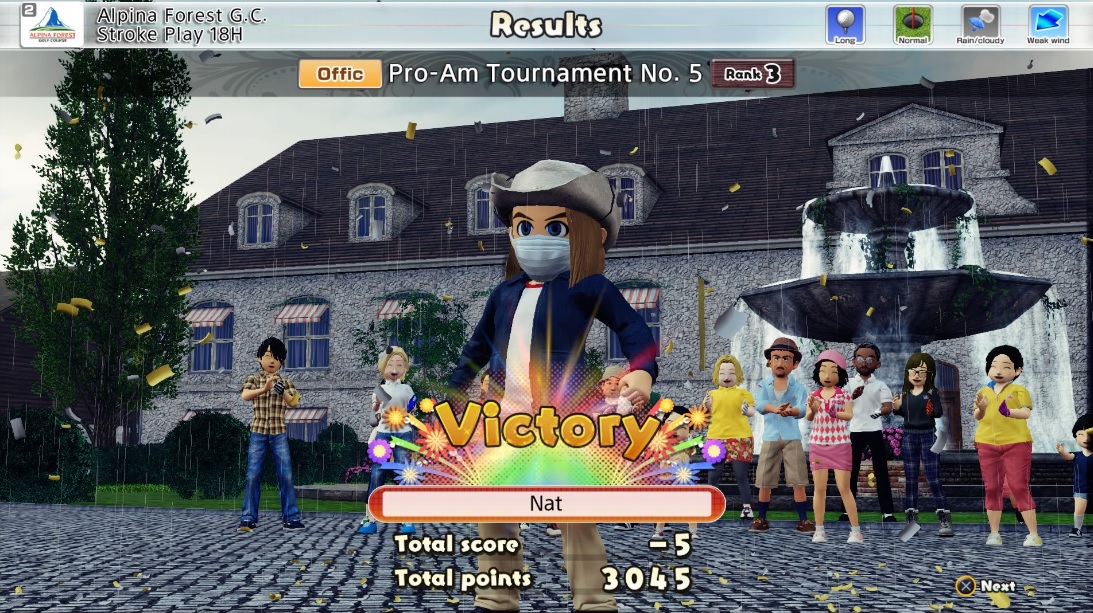 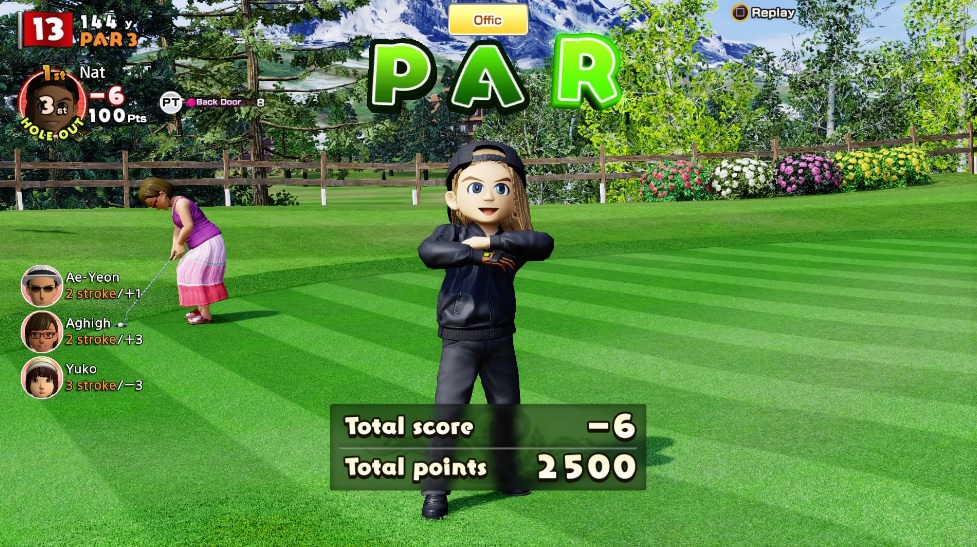 At times, Everybody’s Golf becomes an addictive character creator. Acquiring prize items in tournaments and winning entire costumes from bosses led me to spend an embarrassing amount of time in the customization menus to try and create the coolest looking golfer. As you can see in the screen shots above I have experimented with a few different looks, and I’m sure many reading this can agree that your in-game avatar is never perfect, and the cycle continues on and on customizing my golfer dude. This is one of Everybody’s Golf’s strongest side-offerings, and I’m glad Clap Hanz fleshed out the system and made acquiring new items, voices, swings, and accessories as compelling as they have.

“Level up high enough in the ranks, and you will be taught how to drive golf carts. Defeat a certain secret boss, and you’ll be able to swim faster and explore the courses further.”

Alongside the titular golf and the addictive character customization, there are other small activities on offer in Everybody’s Golf. Level up high enough in the ranks, and you will be taught how to drive golf carts. Defeat a certain secret boss, and you’ll be able to swim faster and explore the courses further. Level up even more (beyond what I’m yet to achieve) and the illusive fishing mini-game will be unlocked. Overall, these mini-games offer little substance or relevance to the overall gameplay experience. A word of warning for the trophy hunters out there: they have attached a trophy to the fishing mini-game that requires you to complete the fish encyclopdia… no thanks.

If you’re strapped for time, or just feel like some casual play, you can do single stroke play. In this game mode you can select any unlocked course, add whatever modifiers you want, and go wild on the green. It’s a little redundant in the grand scheme of things, but useful to practice those tricky backspin or sidespin shots.

A big element of Everybody’s Golf marketing was focused on the online world. There are two main features to the online multiplayer: the actively competitive “Turf War”, and the passively competitive “Open Course”. Turf War sees you teaming up with other players to score as many points on a selected number of holes. Once your team has the high score on that hole it becomes yours, and when the timer stops whichever team has the most holes wins. A little thin and repetitive, but it is cool to see how you stack up to other players in a live multiplayer setting.

Open Course is a casual and relaxed approach to online play, where you can play on any unlocked course and compete in the leaderboards, drive carts, fish, discover items, and explore. Once a day you can make an entry on the daily leaderboard for each course, with the potential to earn prizes if you are one of the top golfers that day. Additionally, there is a local co op mode for some quickfire gameplay, with the some options as the solo stroke play available for some unique and self-driven experiences.

Visually, Everybody’s Golf is a mixed bag. One one side the courses and environments are beautifully rendered, the golfing equipment looks spot on, and the colours are bright and varied. On the other side, the character models look like they belong in the Wii Sports titles, the online world is sparse, and the objects in the environment don’t react to what is happening around them. I admit, in 2017 we are spoiled when it comes to graphics with games like Horizon: Zero Dawn and Forza Motorsport, but is it too much to expect a golf ball to leave a trail in the sand or ripples in the water? NPC characters pop in and out at the most random of times, often when I’m trying to line up a precise putt, and their golf balls zip around and into my own with physical impact. This led to some jarring moments that pulled me right out of the immersion, which is disappointing considering the time the developers have spent on the game.

I’ll say again though, these courses DO look great. 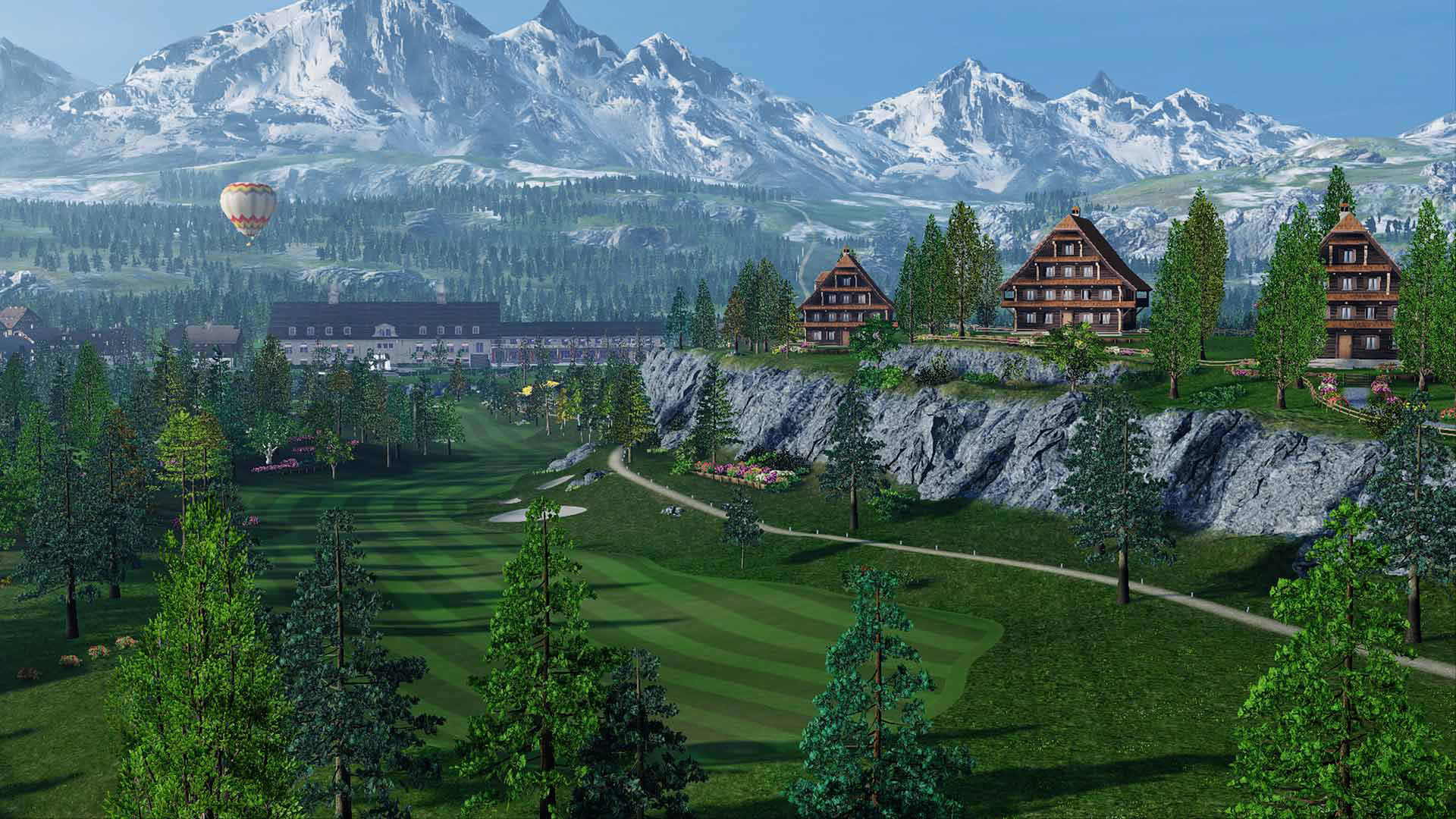 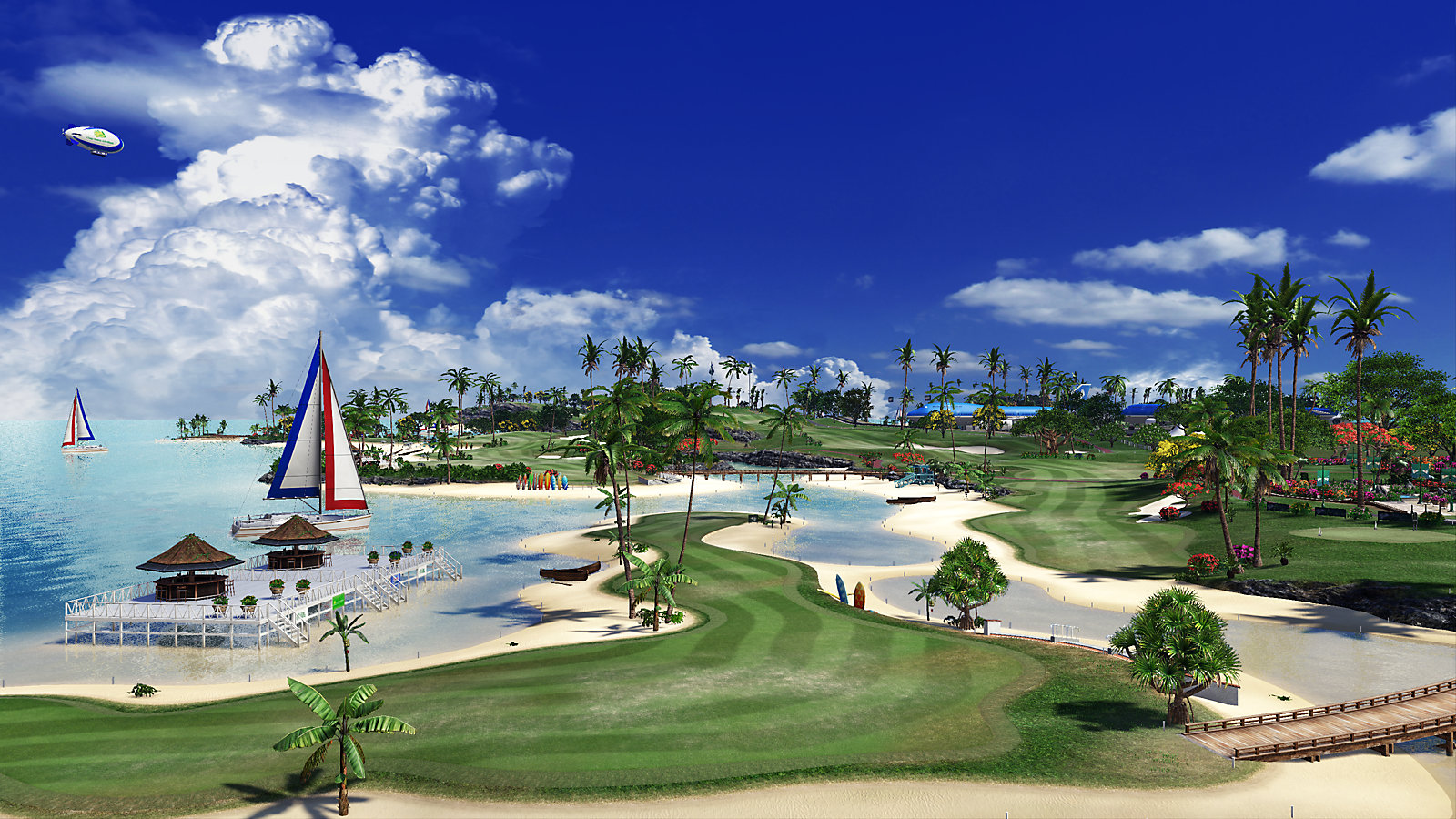 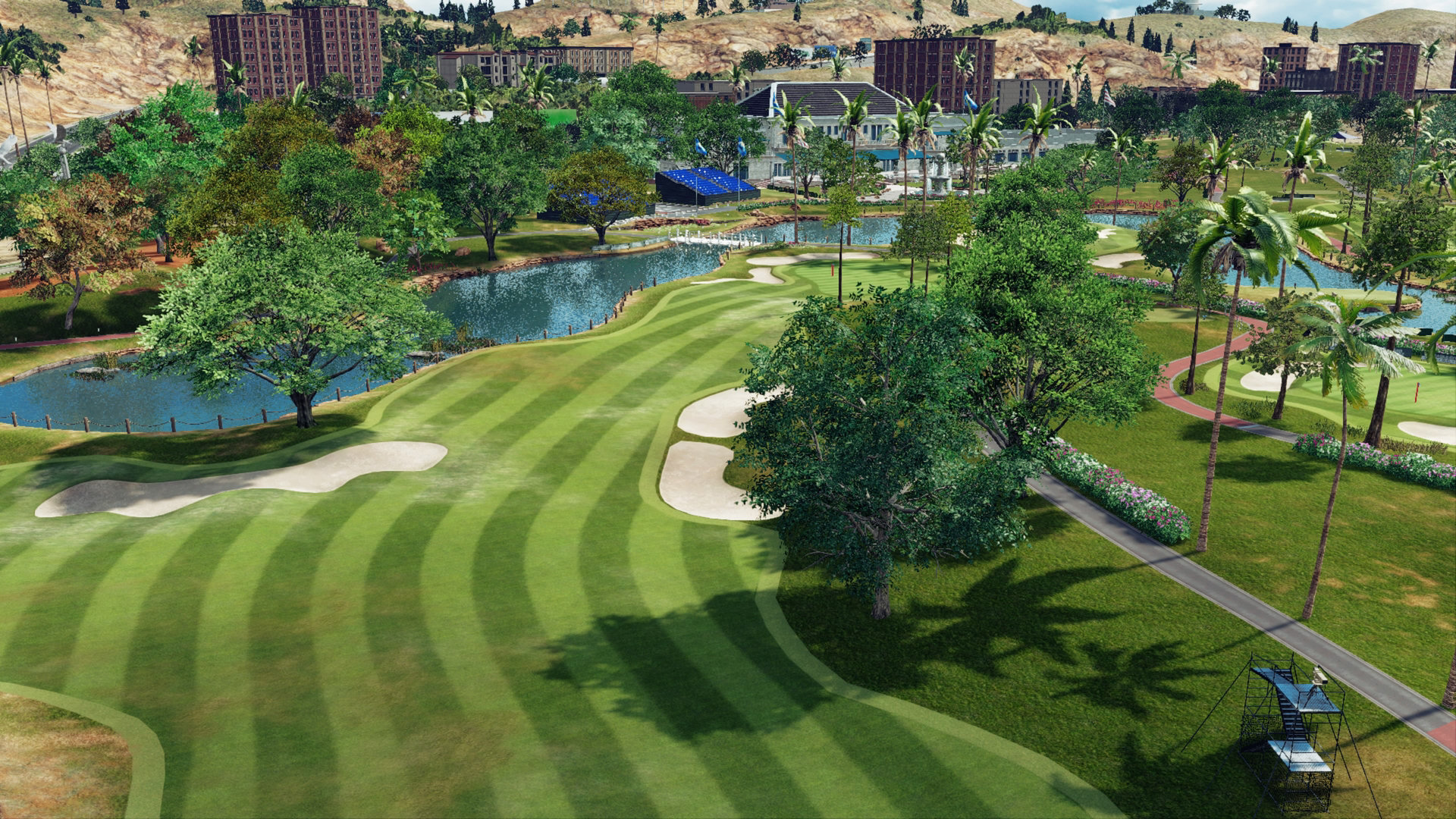 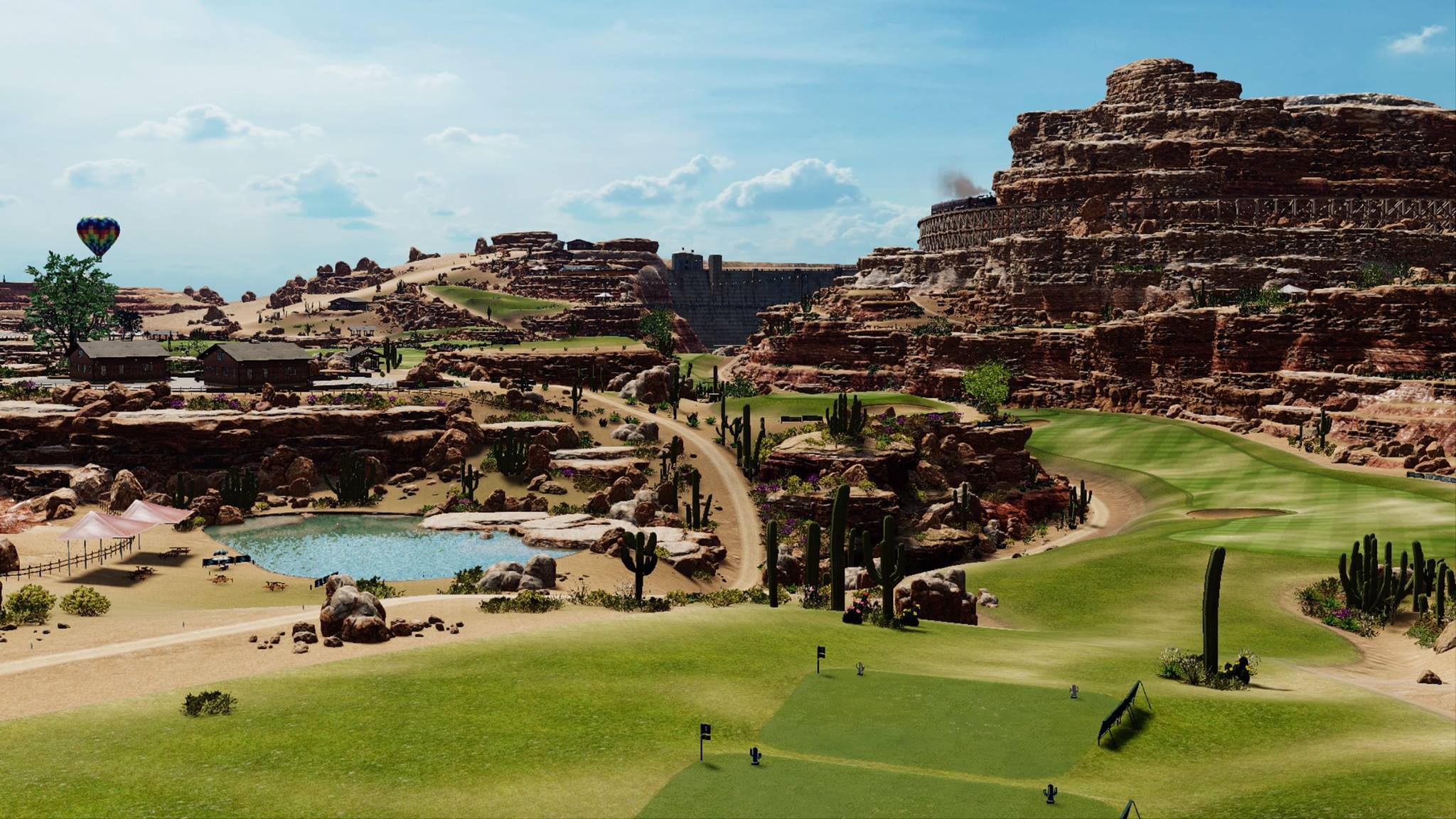 I was not only gripped by the progression and customization systems, I was gripped by the whimsical, fun, and colourful approach to the sport that Everybody’s Golf took. The whole experience is dripping in humour, relaxation, and adventure, and provides a well-needed break from the serious and competitive tone of other sports blockbusters out there. While there are some flaws in the scattered direction the game tried to take and some annoying visual issues that could easily be patched out, Clap Hanz have released a wonderful golf game that I’m sure will hit a hole-in-one with many out there.