Marvel vs Capcom: Infinite Review – What is half of infinity?

Marvel vs Capcom: Infinite has infinite possibilities, but does not quite yet live up to expectations.

Back in 2013, the Marvel vs Capcom fighting game franchise appeared to be over – digital versions of Ultimate Marvel Vs. Capcom 3 and Marvel Vs. Capcom 2 were removed from online stores and as an avid fan I was hoping one day these games would reappear, but never expected a sequel to emerge four years later.

For those who haven’t heard of the fighting game franchise, Marvel and Capcom teamed up back in 1996 to combine characters from the Street Fighter series with another fighting game, X-Men: Children of the Atom.  The result was X-Men vs Street Fighter, and started a series of fighting games which expanded to include many other characters from the Capcom and Marvel universes where players can pick two or three fighters with the ability to combine attacks and super moves in a fast-paced flurry of action that created a near cult-like following of fans.

For those familiar with the games or the Marvel universe, Marvel vs Capcom: Infinite is based upon the six infinity gems, each granting different powers, with total control over the universe for those in possession of all six.  This unfortunately was not an original concept for the franchise with Marvel Super Heroes also featuring these gems. The fact these gems feature in the current Marvel movie series is certainly no coincidence, and you will gather very quickly that the characters chosen are very closely tied to the Marvel cinematic universe.

The storylines for all the Marvel vs Capcom renditions are fairly constant:  super-powered villain seeks to control or destroy everything, and as a result, different worlds collide and unlikely folk have to band together to save the day.

In Marvel vs Capcom: Infinite the big bad boss is Sigma Ultron, a joining of Sigma from the Mega Man game series, and Ultron from the Marvel universe.  As far as a simple storyline for a fighting game goes, this one was actually interesting albeit very silly, and the jokes were funny – there just needed to be more of them. There was a definitely slant towards the Marvel universe, which is to be expected, but the merging of worlds does end up with groan-worthy combinations, such as the A.I.M.brella corporation which combines Marvel’s evil scientific organisation A.I.M. with the Umbrella corporation from Capcom’s Resident Evil franchise. 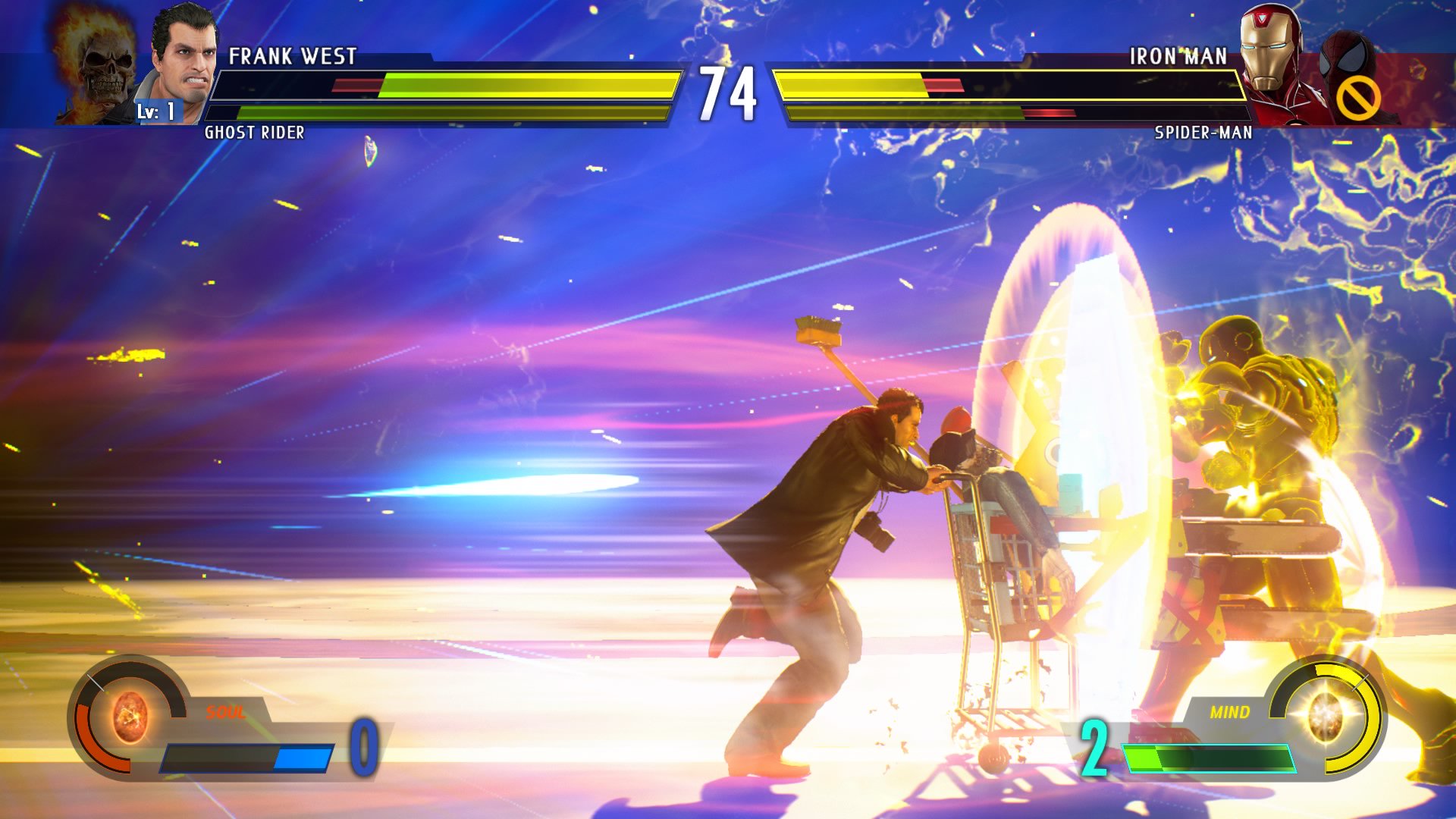 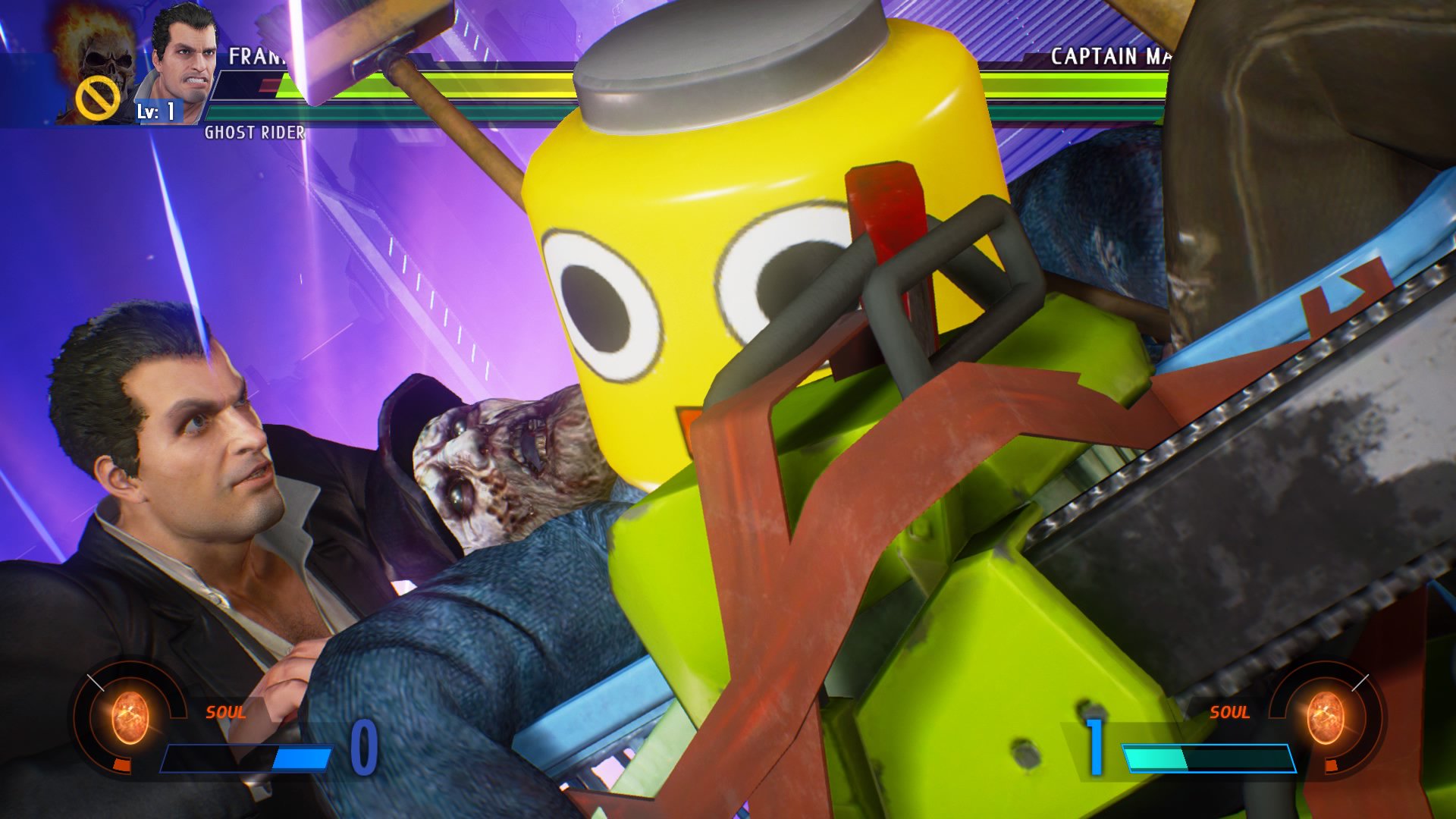 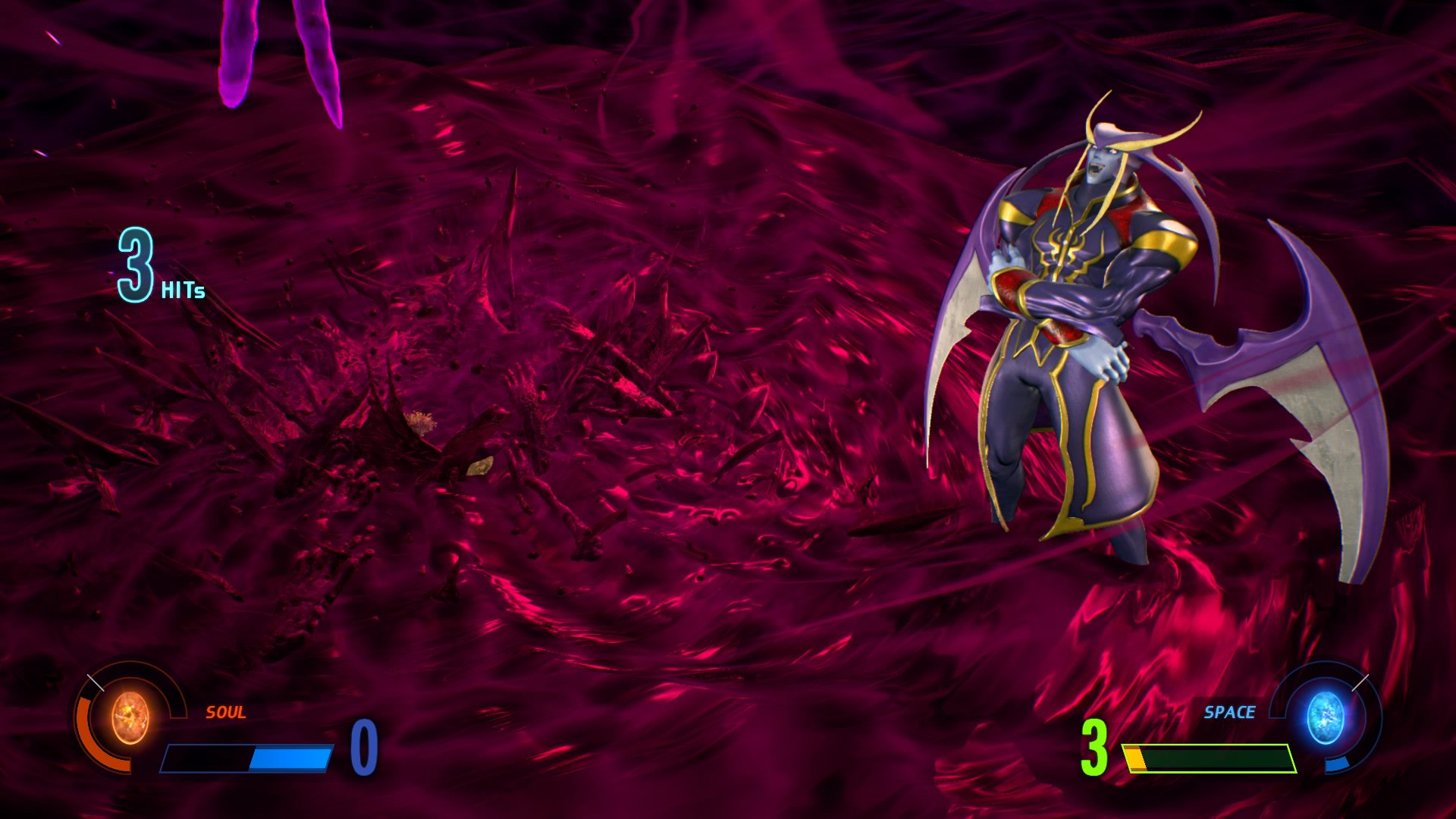 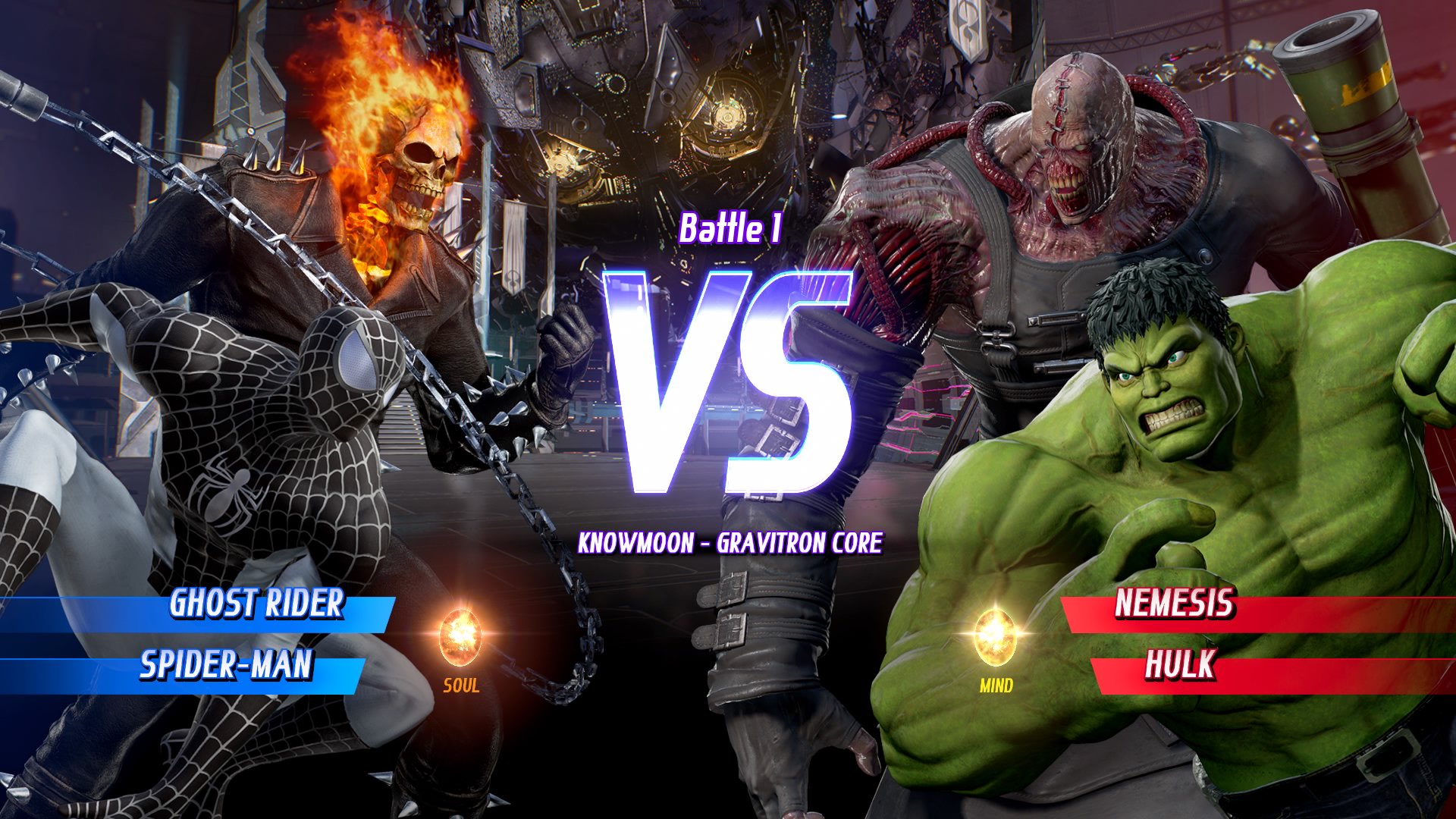 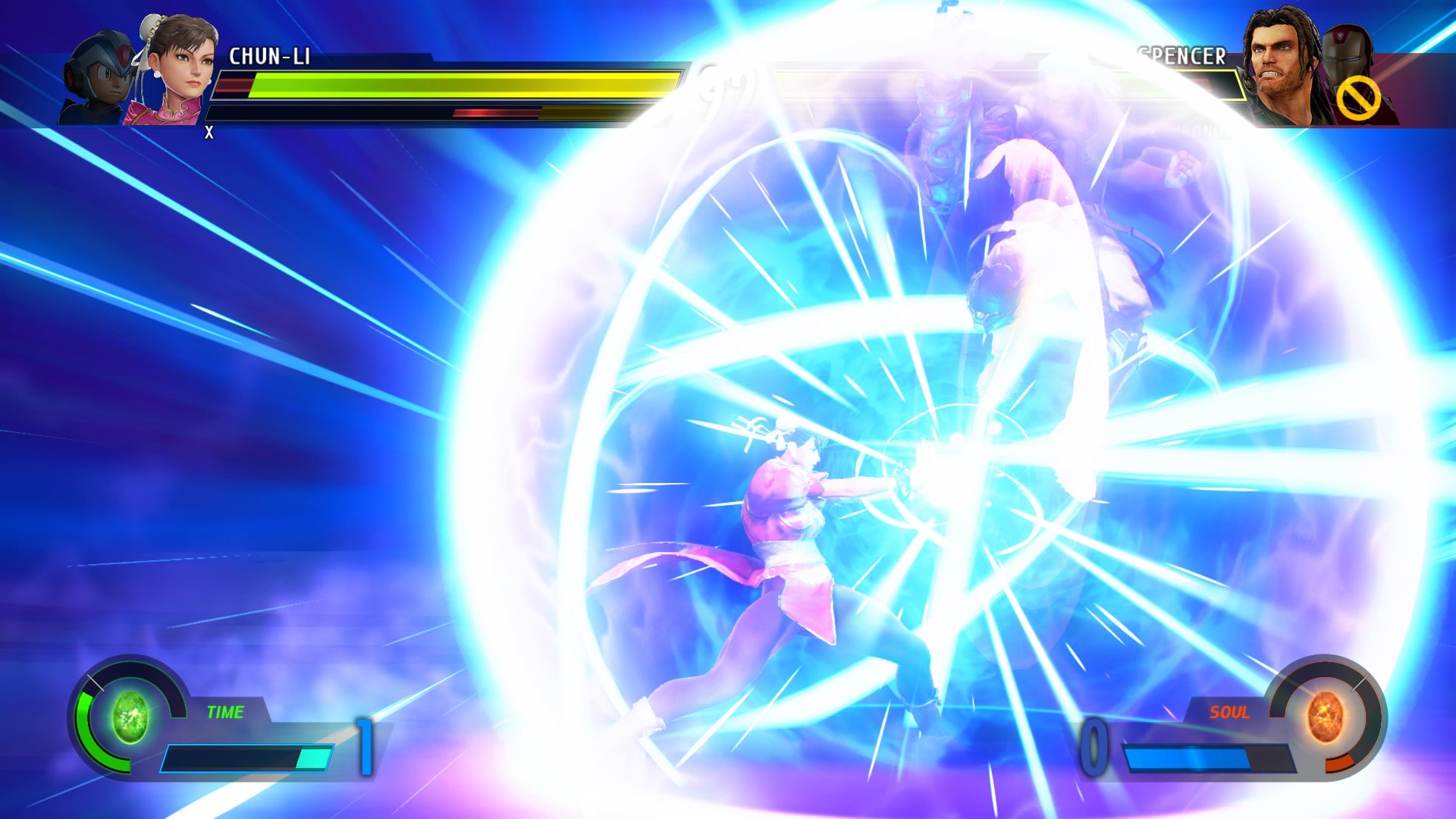 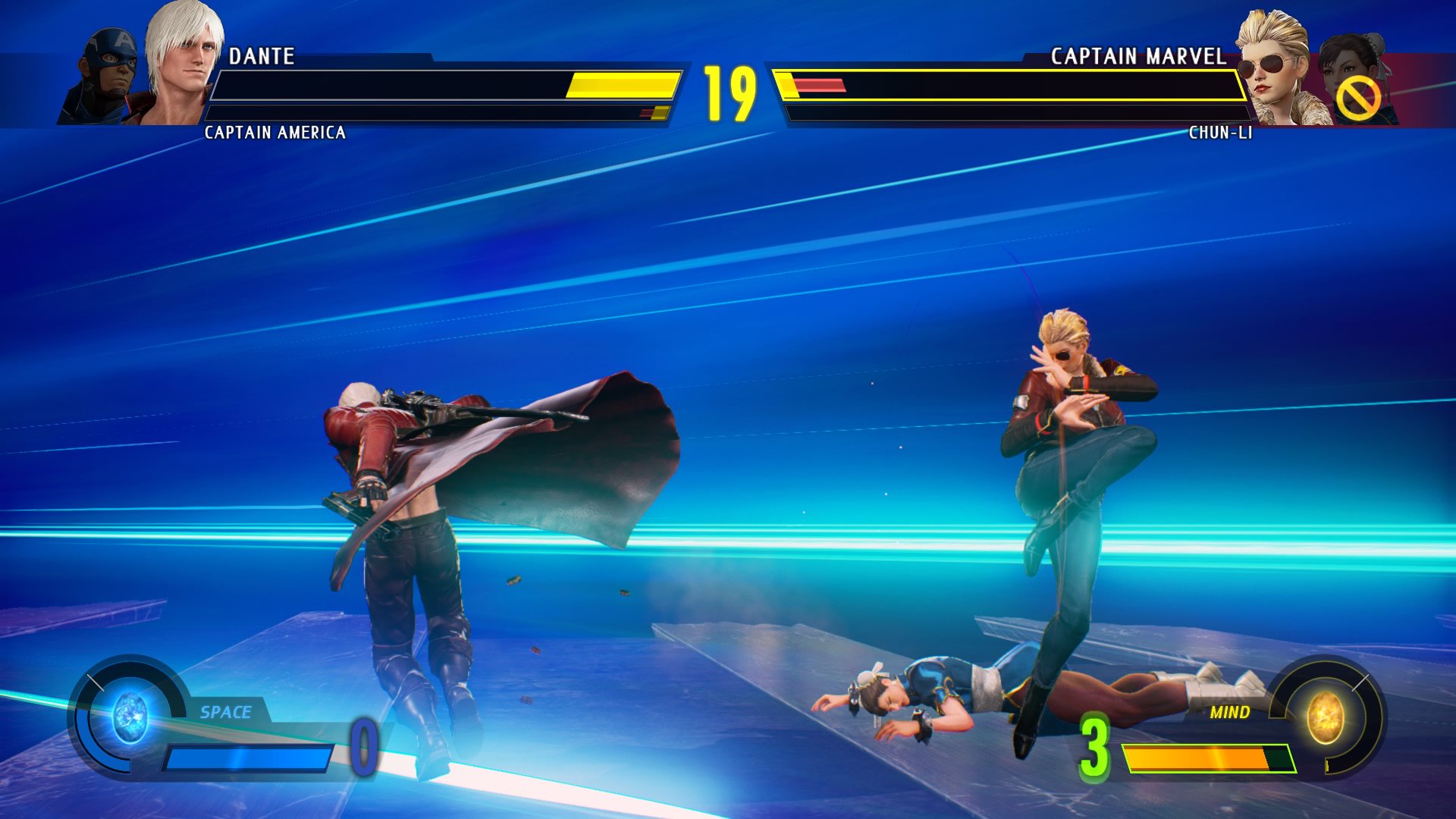 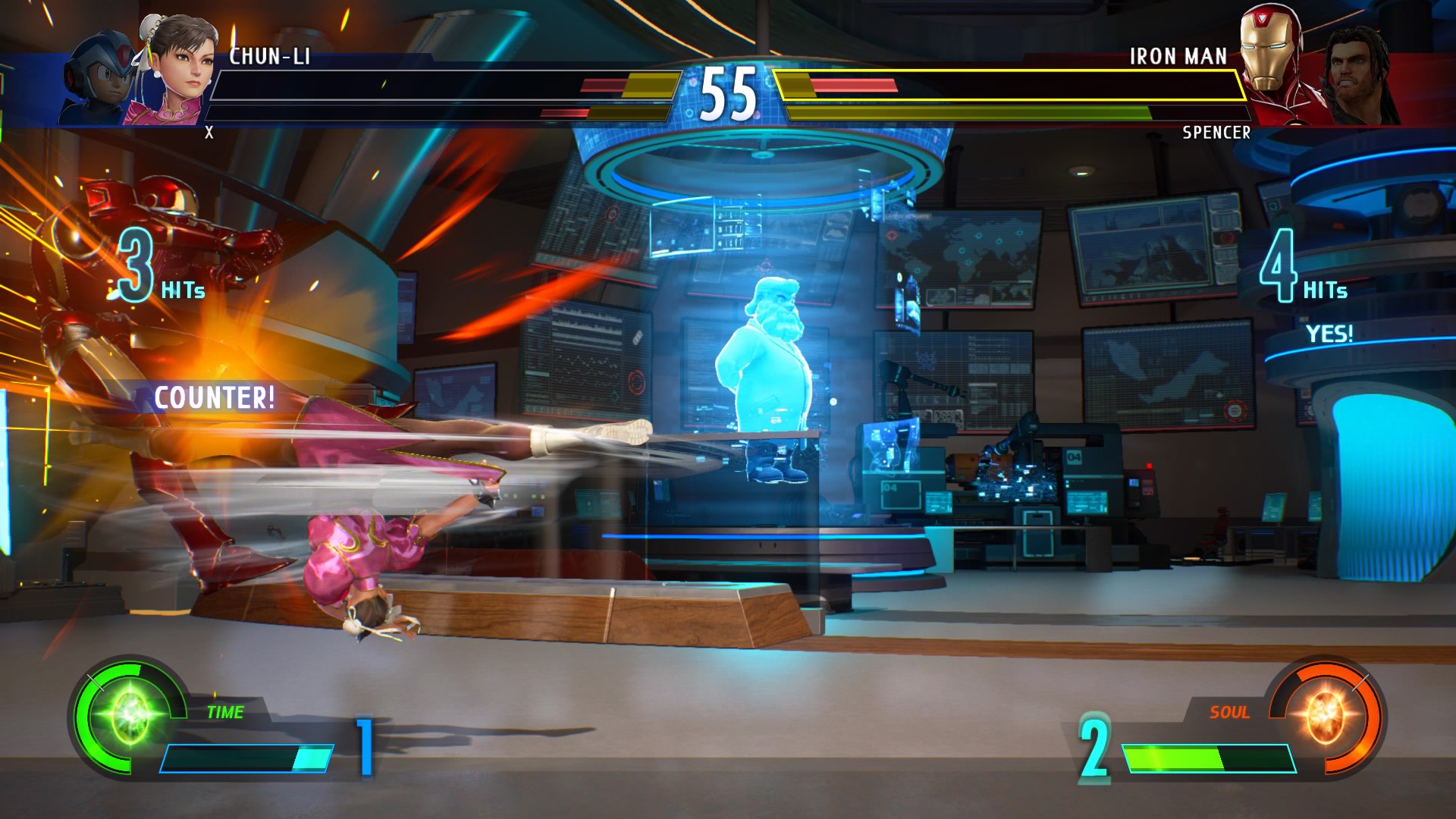 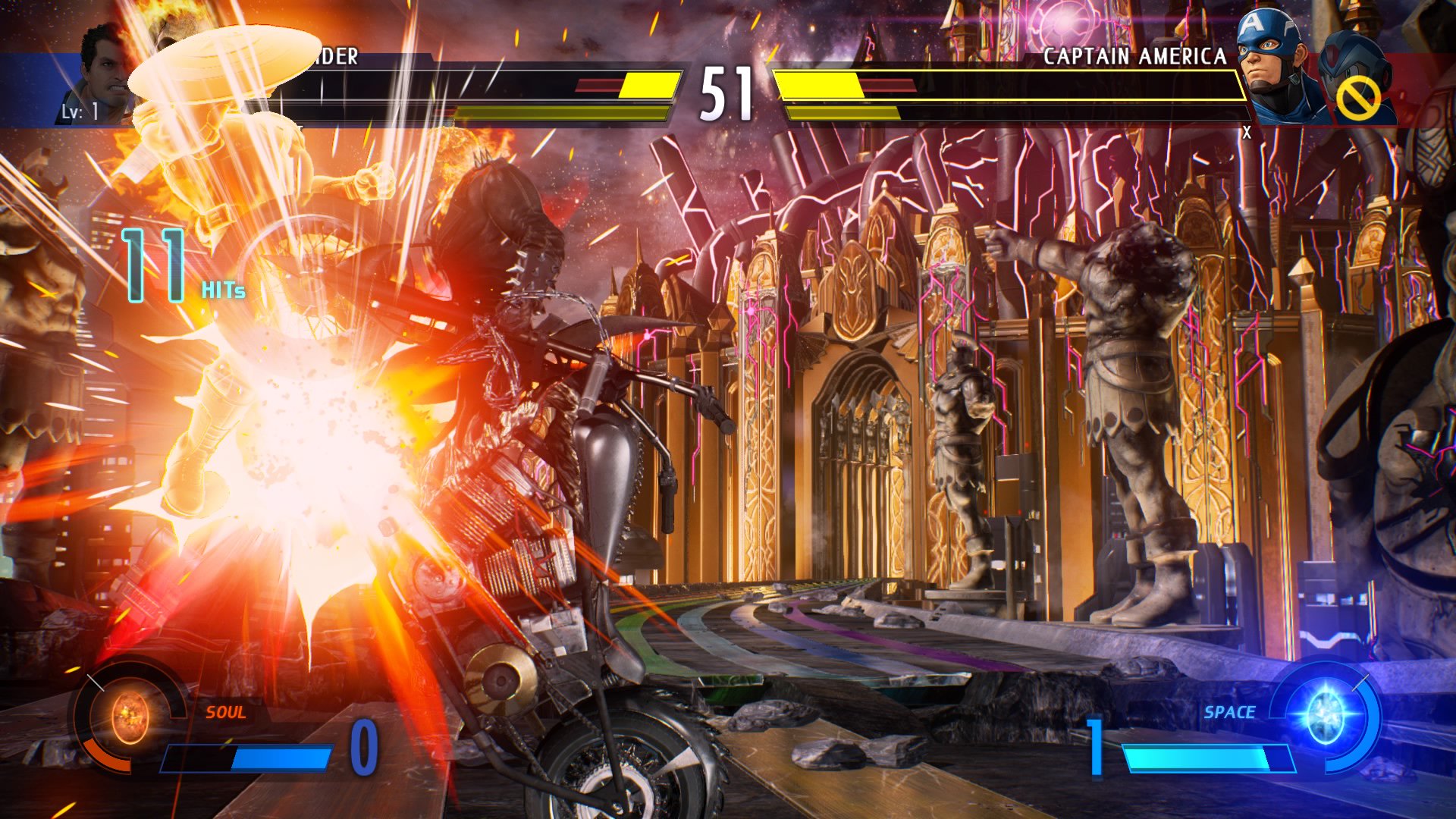 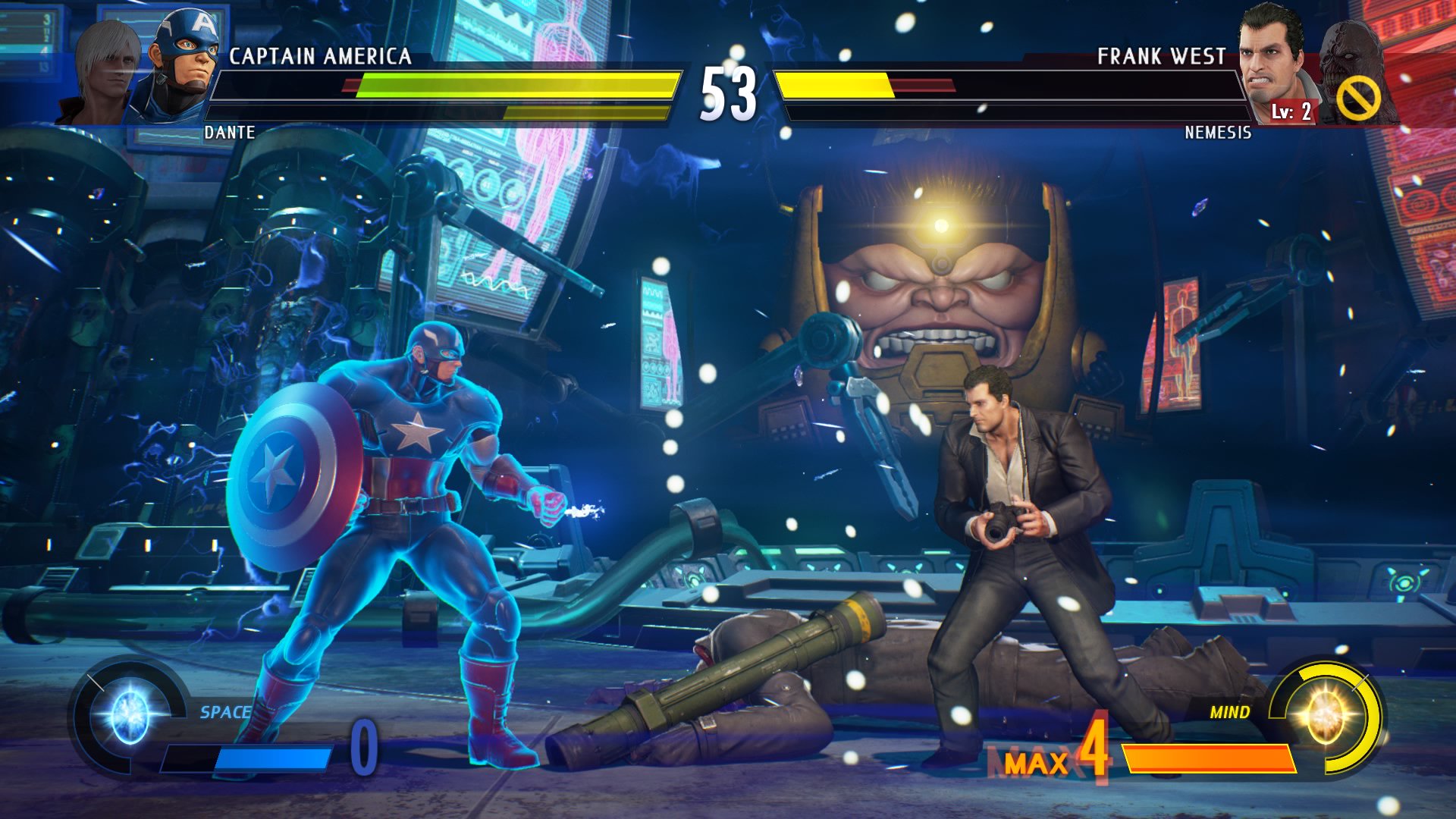 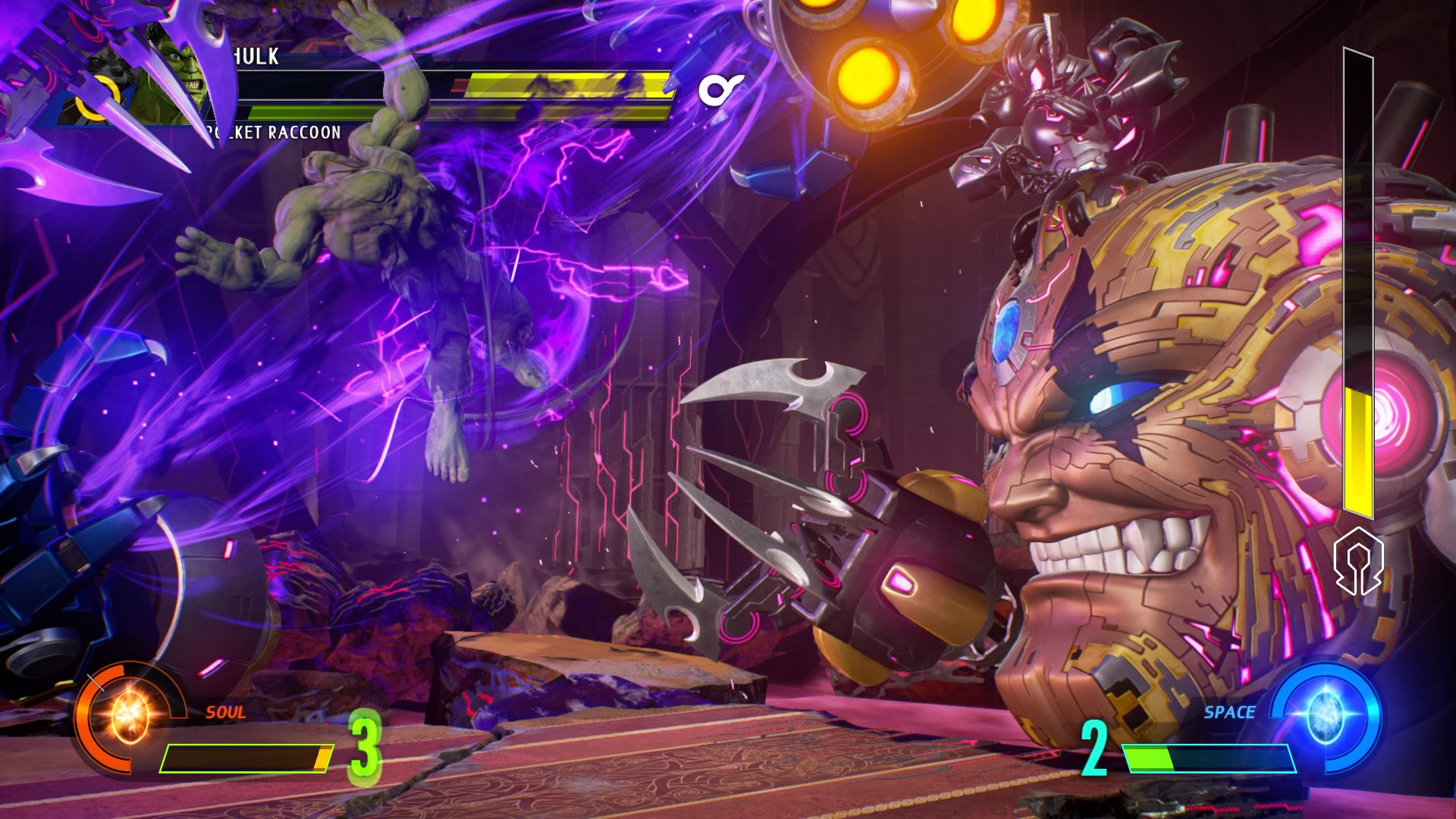 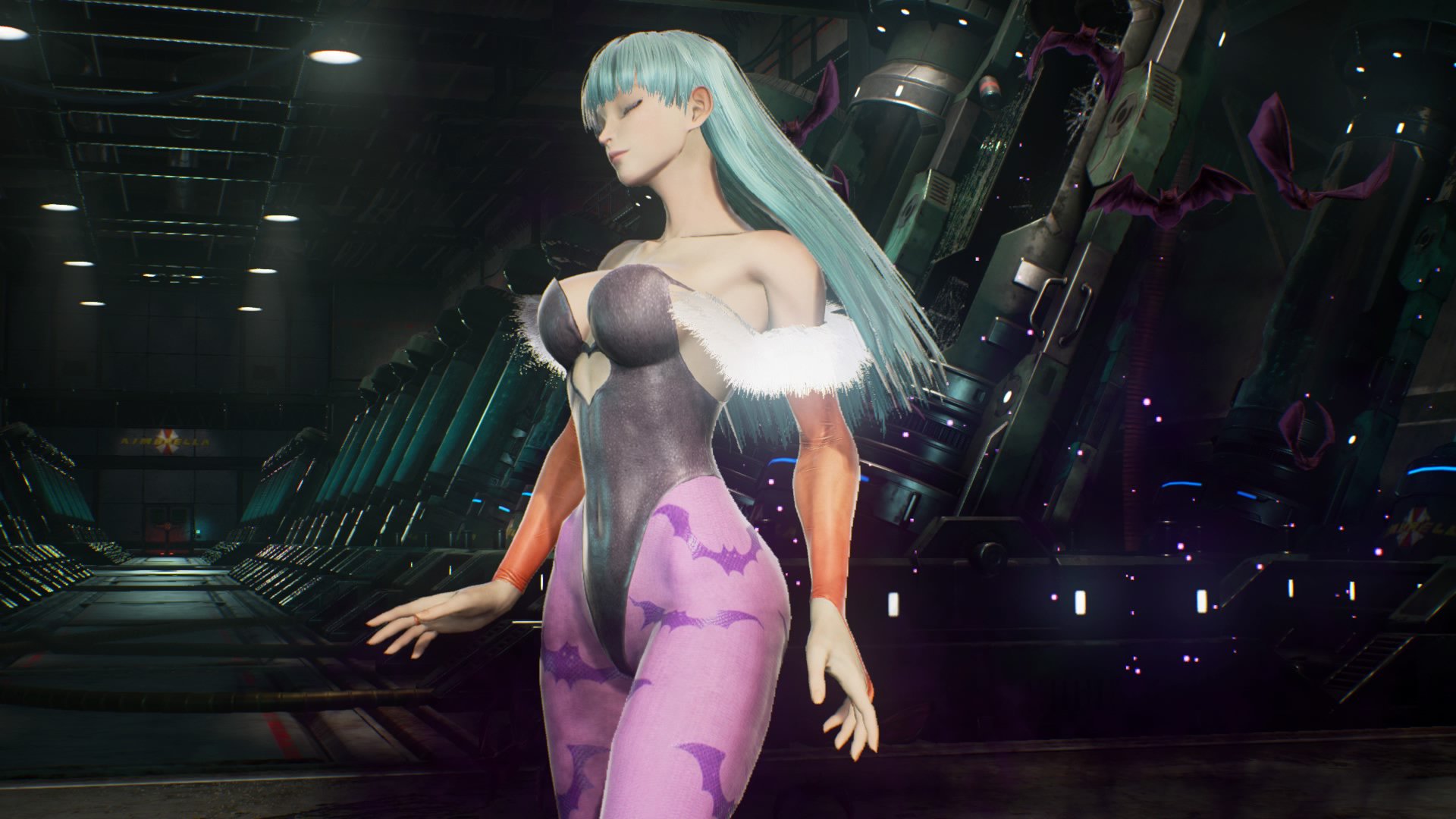 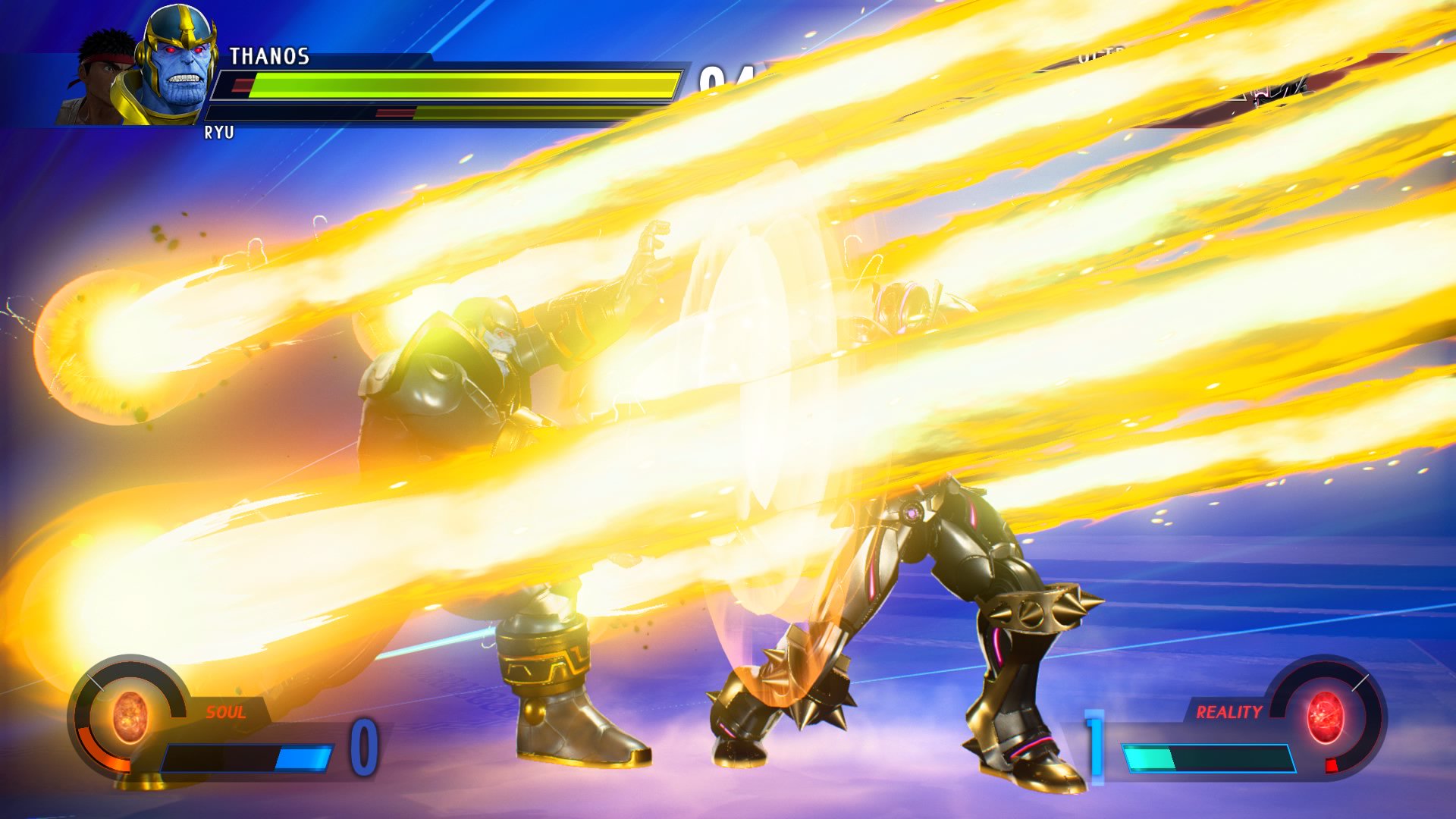 The graphics are mostly well done, at times excellent, but a few characters such as Dante and Captain America have been hit a few times with the ugly stick.  The voices for some during gameplay are also a bit questionable with bad lip syncing, and it is a bit irritating and out of character for Thanos to be yelling out gems as he uses their abilities.  Characters also communicate to each other during combat and yell out each other’s names, apart from the Hulk who comes up with hilarious substitutes such as calling Chris Fedfield “Rock Puncher”, a reference to a ridiculous moment in Resident Evil 5.

Those familiar with Marvel vs Capcom will have no trouble getting stuck into the action immediately.  Combos seem a bit easier to pull off than in previous versions, and I managed to beat the AI using only the Square button and maybe a super move or two, because they are cool to watch.  A new feature is the ability to select an infinity gem which grants additional powers during the match.  For example, the time gem allows you to dash forward, even through projectiles if timed correctly and the soul gem can steal a small portion of life from your opponent to add to your own.  A meter charges as you use your gem, enabling you to unleash the gem’s full power in a fairly pretty fashion. Not overly devastating at first – but pretty.

You can get away with not focussing on these gems against the computer, although using the soul gem against the final boss Sigma Ultron makes the battle almost too easy.  The gems have the potential of adding another layer of epic battling when playing against other players, though I feel that most people will choose the soul gem based on its ability to control both of your characters at the same time.  This is a game designed for online multi-play action and before you say it, yes Marvel vs Capcom: Infinite is dripping with cheese, and the challenge lies in being able to avoid the cheap tricks.

One definite improvement is battling the final boss Sigma Ultron.  In other games in the franchise, the final boss is almost a bit of an anticlimax, with certain characters able to instantly beat the boss’s final form with a group super move.  Although I wouldn’t say Sigma Ultron is particularly difficult, it does take considerably longer to defeat than the bosses from other games.

The most notable aspect of this game is that you only control two characters, rather than the three introduced in Marvel vs Capcom 2.  I am still not sure why this change was made, and it does feel like a step backwards.  I can only guess it is to make battling online less prone to errors. There was also no X-Men characters to be seen, making this the first game to be missing Wolverine, and the absence shows. Based on all the licensing kerfuffles with the X-Men franchise it is not surprising, but given this I would have expected, or hoped, that Inhumans made their way onto the roster in their absence, or at least an effort to include more characters missing from the previous games such as Street Fighter’s Blanka or more from the Darkstalkers universe.  Ryu and Chun-li are now the only characters who have appeared in each game in this franchise.

This is not to say there is a bad line-up of characters, it just feels a bit limited. Jedah, the demon boss from the Darkstalkers franchise, is simply awesome, and the return of Frank West from Capcom’s Dead Rising was an unexpected, but hilariously welcome inclusion with attacks include camera shots, a plunger and a shopping trolley super.  But given we now live in the day of DLCs, many more characters have and will be revealed.

“…this game needs to have a huge roster of characters, in my opinion more than any other in the series.”

As a game designed for online multiplayer action and being such an anticipated release with a name such as ‘infinite’, this game needs to have a huge roster of characters, in my opinion more than any other in the series.  For a comparison, Ultimate Marvel vs Capcom 3 had 50 characters, and at the time of writing Marvel vs Capcom: Infinite has a base roster of 30 plus 6 additional DLCs.

I also hope for more female characters, as the starting line-up contained only four female fighters (Captain Marvel, Chun-Li, Gamora, and Morrigan) with Black Widow and a female Monster Hunter as DLCs, which is pretty pathetic considering even Ultimate Marvel vs Capcom 3 with its poor representation still had 11 female humanoid characters (12 if you include Amaterasu).

If Marvel vs Capcom: Infinite doesn’t eventually deliver on these fronts, then this game is a failure for long term playability.

Marvel vs Capcom: Infinite is a fun addition to the franchise but feels like a step backwards, with many of the characters I love being missing and the infinity gem aspect not making up for a lack of a third character.  It is as though we ordered the Supreme, but were delivered a Hawaiian minus the meat. A lot of cheese and a bit of sweetness, but not everyone will want the pineapple.

Time will tell if our original order eventually arrives.