It’s been a couple of years since I first played Cuphead at PAX AUS, and it’s been one of the most anticipated indie titles since it was announced. It’s inspired by 1930’s cartoons and nostalgic in a different way with its no-nonsense difficulty that doesn’t hold your hand at all. Despite a long development cycle and a lot of hype building behind it, the game is a resounding success. With tough-as-nails gameplay and an aesthetic that is one of the most effective and well-executed in recent memory, Cuphead is a triumph in game design.

The story is a simple setup; Cuphead and Mugman pay the ultimate price by literally gambling their lives away, but do a deal with the devil in order to survive: Capture the souls of others who are in his debt. This triggers an overworld map with a range of bosses that must be defeated in order to complete the game… but these aren’t just ordinary bosses, but super-challenging entities with a range of attacks that must be taken seriously.

With only three lives for the entirety of each sequence, any projectile that hits you or accidentally connecting with any of the enemies on screen is quite the setback. Battles are never simple, with each boss featuring multiple stages that must be progressed through, and you’ll need to learn the best path each time. It’s the kind of gameplay that is old school in nature; there are no warnings when the vines of a flower shoot quickly upward from the bottom of a stage, no indicators when a giant boxing frog decides to shoot projectiles for the first time and no mercy when a rollercoaster of death comes at you at full speed.

It’s frustrating to a point, but it also consistently teaches you tactics which are essential for your survival. Death means replaying the entire stage, so it will definitely take you a few attempts usually before you really know what attacks to avoid and where you should focus your energy, as they all follow patterns and get progressively harder as the fight goes on. 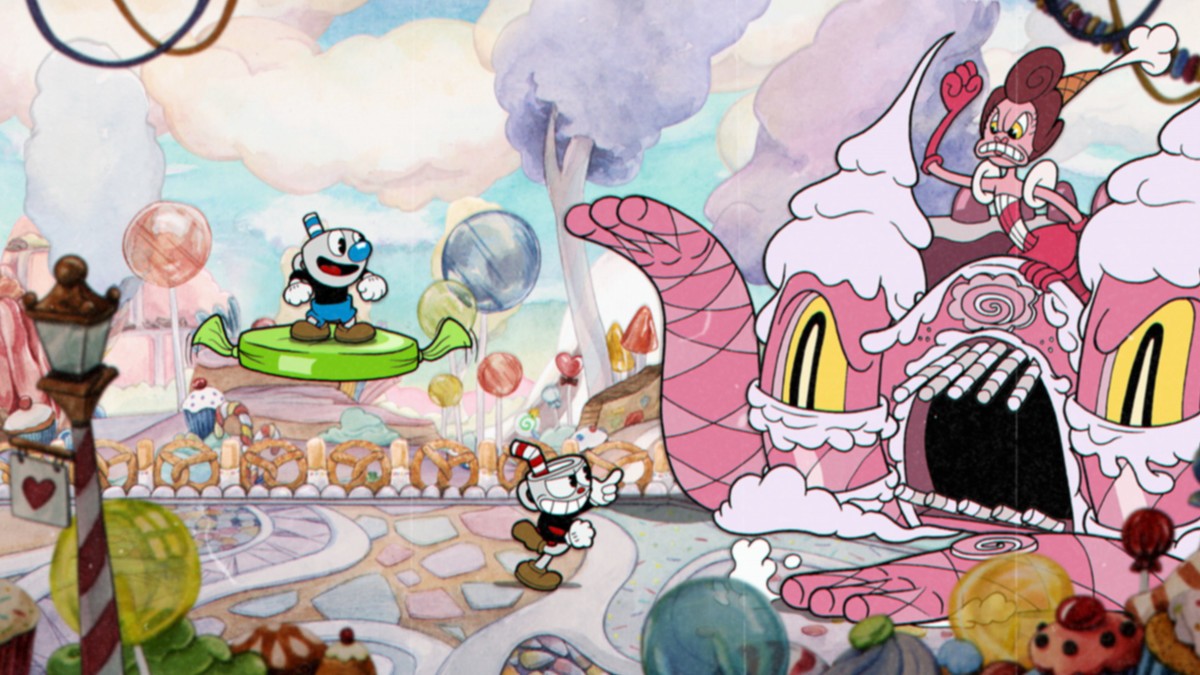 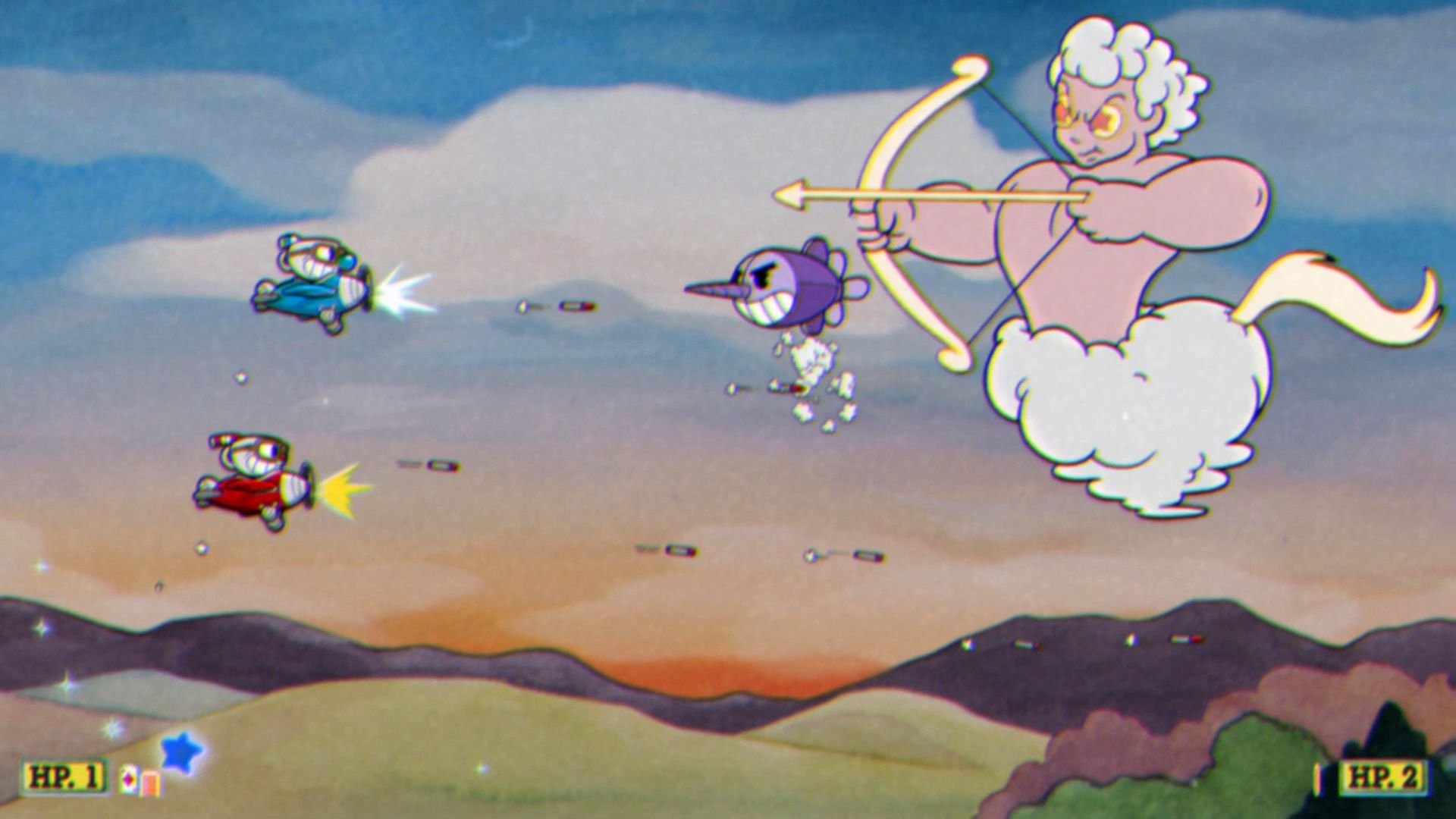 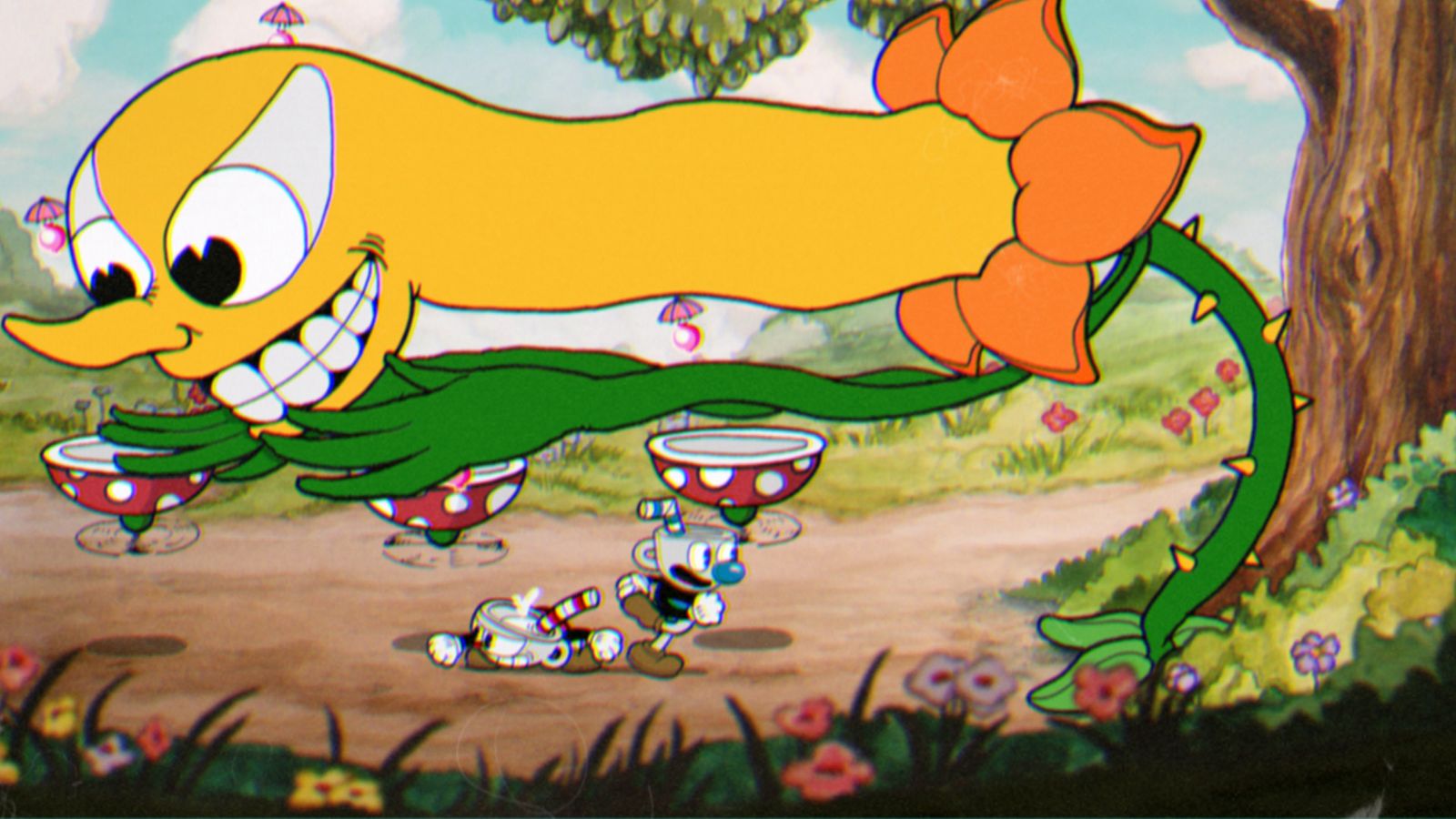 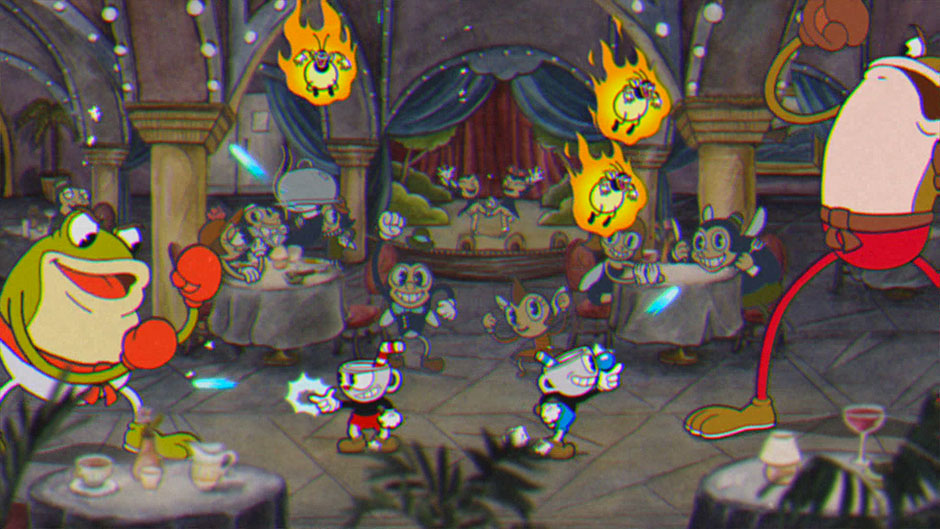 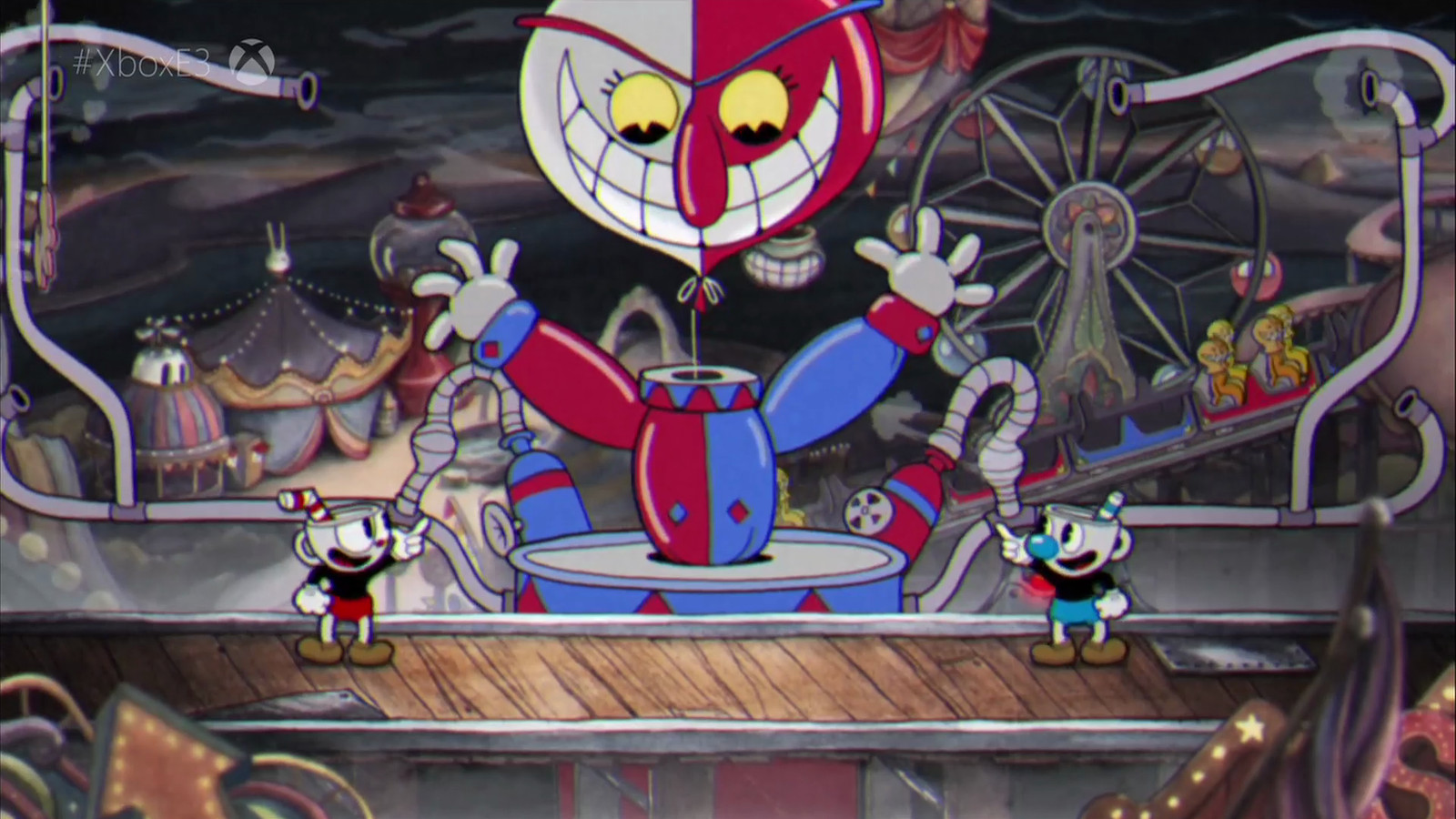 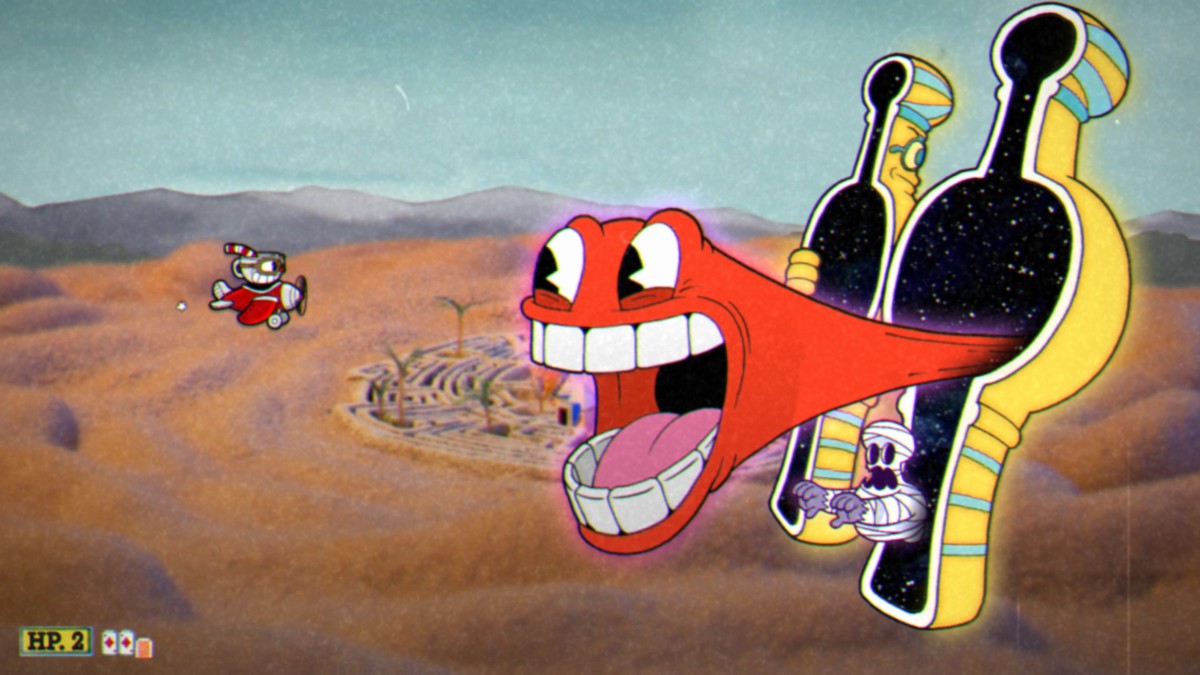 The absolute elation when you do actually achieve victory is a large mix of relief and achievement; combined with the sharp visuals and perfect soundtrack, it’s a package that never upset me, even when I was getting my arse handed to me over and over again. The grainy film-like quality of the loading screens, the way the slightly out-of-focus colours and styling completely reflects the era and the very detailed, evil expressions on the faces of your foes had me grinning with delight.

They’ve managed to pack so much character and so much detail into every hand-drawn battle that it’s almost a shame that you’re so focused on staying alive, as you don’t get to stop and take it all in. The world map is less impressive but still has heaps of personality, with the ability to get better weapons and other upgrades to assist you; but you’ll never feel overpowered even with these earned advantages. Sometimes it’s tricky to know your progress within each fight but I attribute that to part of the challenge of always keeping on your toes.

“After countless deaths, I still want to go back and play more – it’s just that captivating.”

Even the way the shopkeeper greets you and the announcer bellows at the beginning of a battle is on point, with a soundtrack that combines jazz, swing and big band to keep the mood feeling nostalgic with positive vibes. It’s completely charming and gave me a retro-inspired buzz that I haven’t felt since experiencing the Fallout 4 soundtrack. Straight out of that era but not out of place in the slightest.

Playing Cuphead couch co-op style might seem like a good idea to double your chances of survival, and I’m not going to deny that playing with a mate by your side definitely provides a whole heap of laughs. It does however make the game even harder than it already is (and trust me, it’s already bloody challenging). With an extra person to keep track of, keeping an eye on whether they need reviving and seemingly double the projectiles to avoid, the screen fills with obstacles quickly and the similarities between Cuphead and Mugman often had us confused and tracking the wrong character, which always led to a swift defeat.

Regardless, this is the perfect example of the “just one more go” mentality that these hard video games aim to inspire. When you lose, it’s because you made a mistake, and were perhaps not quite quick enough to avoid that incoming projectile or take advantage of your super attack when you had the opportunity. I wouldn’t recommend fighting the bosses in “simple” mode as the accomplishment is definitely less. After countless deaths (oh, turns out they are counted in-game and you can see just how awful you are, thanks for that), I still want to go back and play more – it’s just that captivating.

Normally when a game is this tough it can be off-putting, but the combination of intense difficulty and the skill required to learn each pattern is incredibly satisfying. It’s a fine balance that Cuphead is able to achieve with every single boss you’ll encounter, and even when you’re feeling frustrated, the brilliant soundtrack and completely unique art direction will keep you smiling with every new attempt. The standard for combining style and substance in this genre has well and truly been set.