Sci-Fi and Acid Trips go hand in hand. The fantasies of far flung space and pushing the boundaries into psychedelic imagery found in the back of your imagination. Not all of it will change your world but will bring with it a lot of fun and distractions from the mundane reality we live in. Somewhere in the latter you’ll find Songbringer — a retro top down action-RPG game from indie studio Wizard Fu Games.

You take on the role of the topless space-explorer Roq who, along with his AI drone companion Jib, finds himself stranded on the unfamiliar planet of Ekzera. Roq is tasked with finding the rest of the ground crew and getting everyone back on board their starship, the Songbringer. Things quickly go south though as Roq, against the suggestions go Jib, goes full folklore after removing a mystical sword from the earth and awakening space demons — I honestly don’t know how else to describe them.

As the game opens you’ll be asked to enter a five letter “World-Seed” and that will help create the layout for your procedurally generated planet, Ekzera. With nods back to classic Zelda you’ll find yourself traversing your personalised overworld hunting for 9 seperate dungeons that will offer progression, upgrades and new gear. Taking your sword, your bombs and your “boomerang” top hat you’ll unlock new areas as you learn the abilities you need to get through and take on small mobs of enemies.

The real challenges you’ll find in the demon infested dungeons, whether it is one very quick enemy that will make you work for victory or a room so full of enemies you’re not sure where they end and you begin. Thankfully between battles you’ll have the special ability to meditate, healing from damage at a slow rate — but meditation will also open up the ability to interact with the world and unlock hidden treasure rooms. Should you ever find yourself in the position that you don’t have time for a quick sit down you can chow down on the well known healing item, a cactus. Be warned though this quick fix comes with some psychedelic hallucinogenic effects that will be pretty unhelpful in the middle of a big fight.

The art style reminds me of my early days in gaming; think original Kings Quest. It has a simplistic charm but with a much deeper colour spectrum. I won’t lie that this sometimes can be a lot for the eye to take in at once and some areas can just feel far to complicated for the pixel art style. The music has a heavy leaning on psychedelic electronic tunes which goes from a great track to a repeating beat that will grind your gears.

As the game opens I found myself running into dungeon after dungeon that took me to task and left me dead. The game rewards your exploration and once you finally find the items you need to you start to see results that makes you feel like your making good progress. The fights are slick and fast but again sometimes the far to busy screen can mean your death is at the hands of an enemy or area of effect you never even saw. 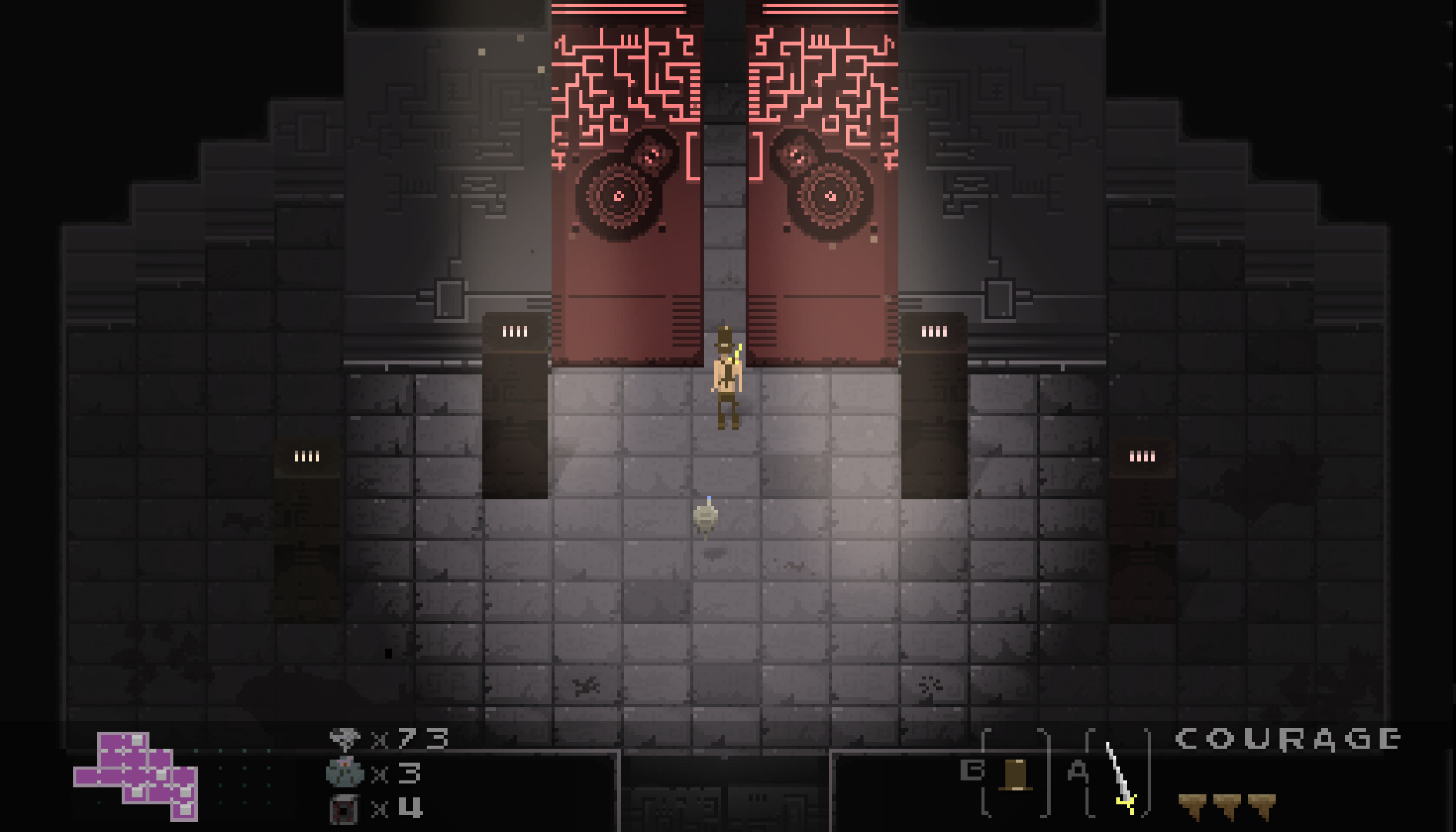 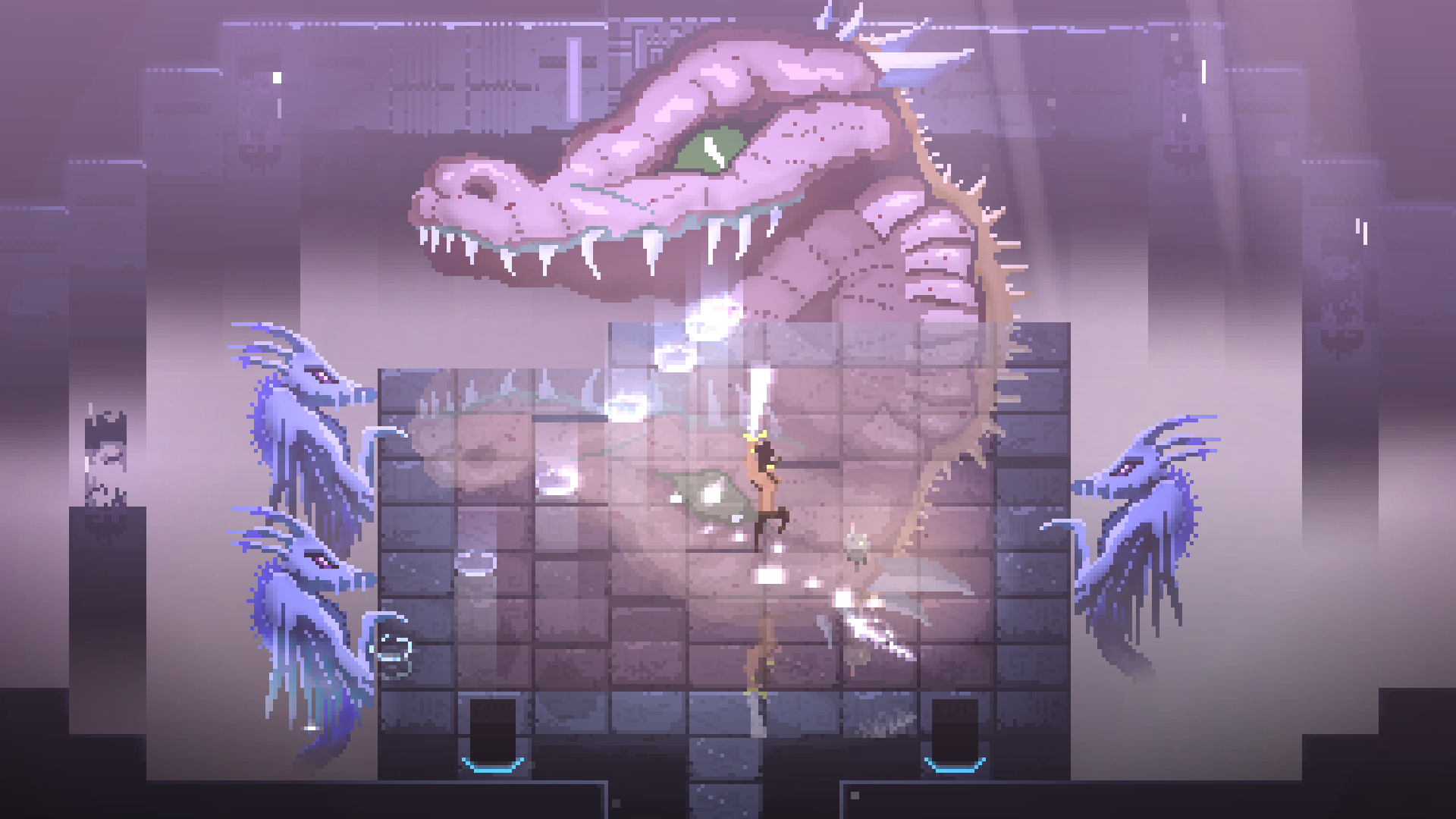 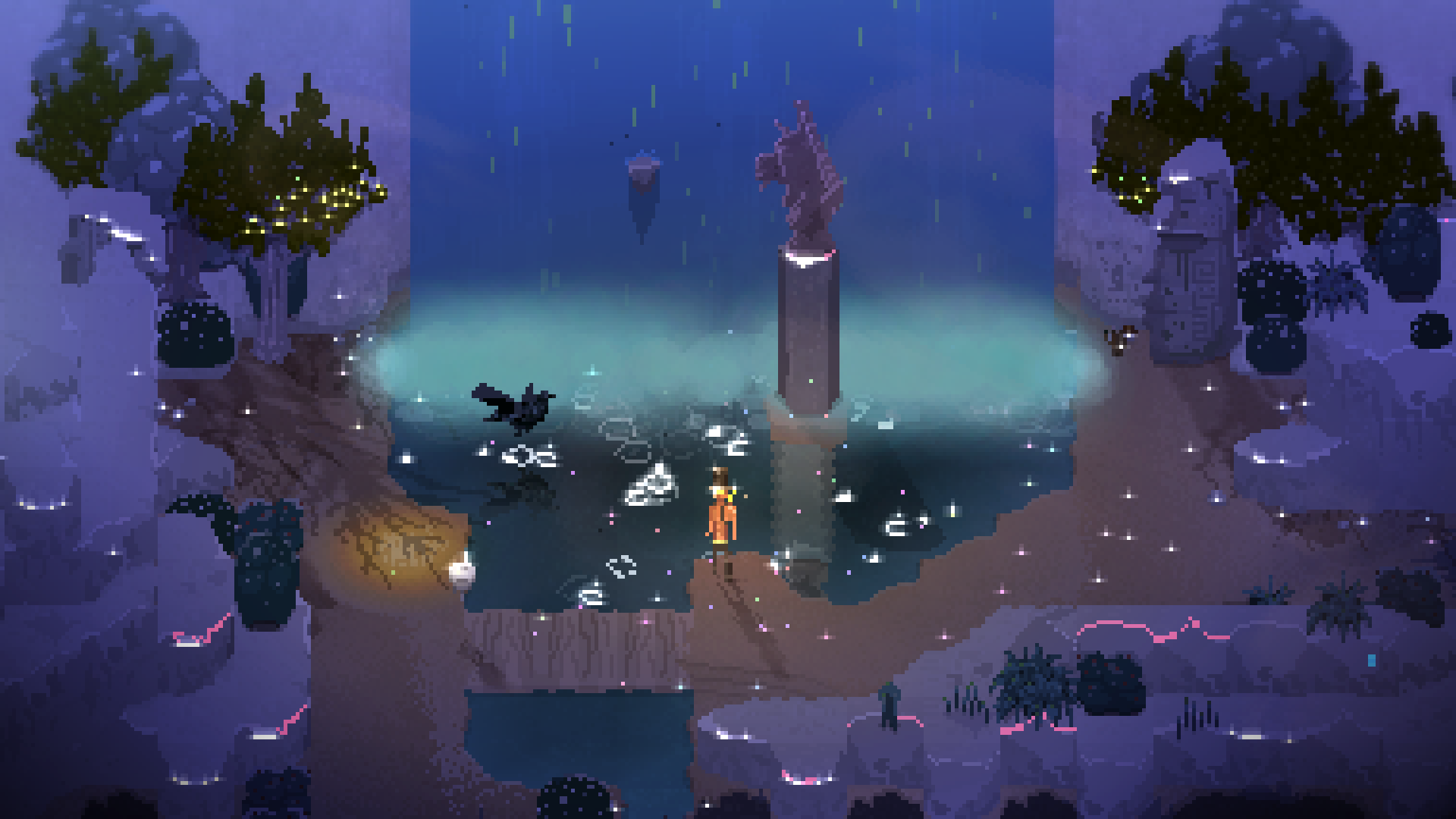 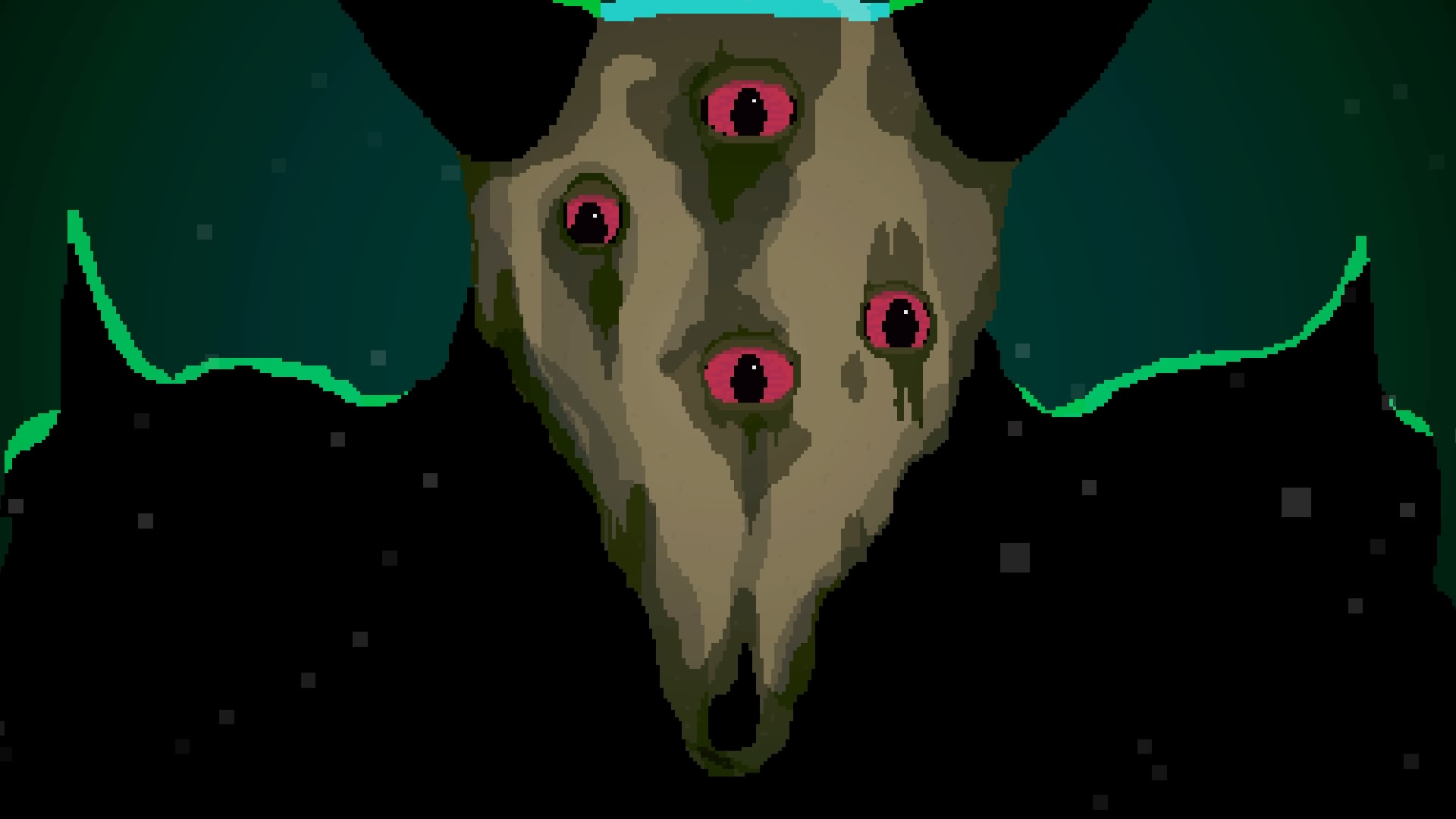 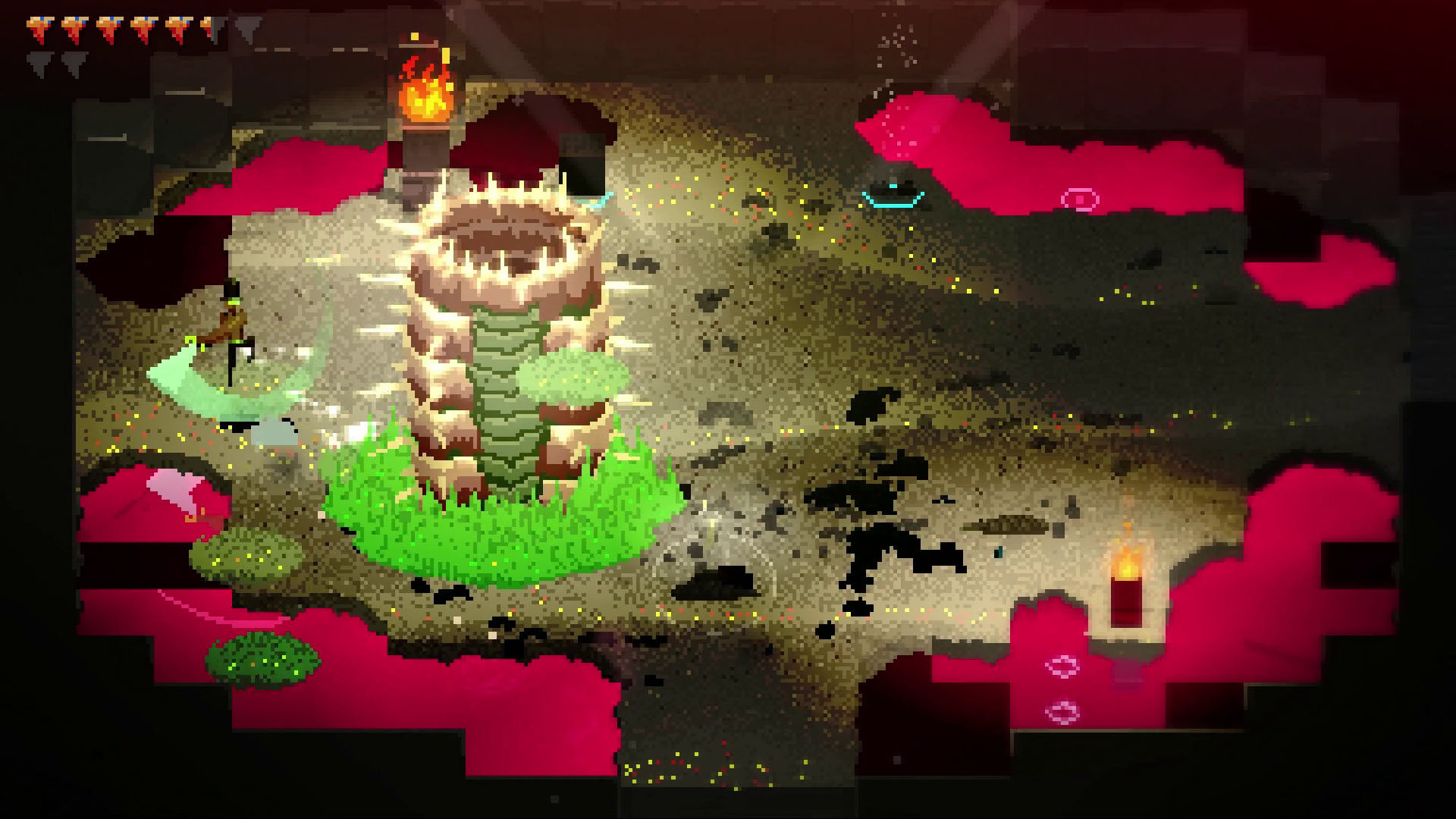 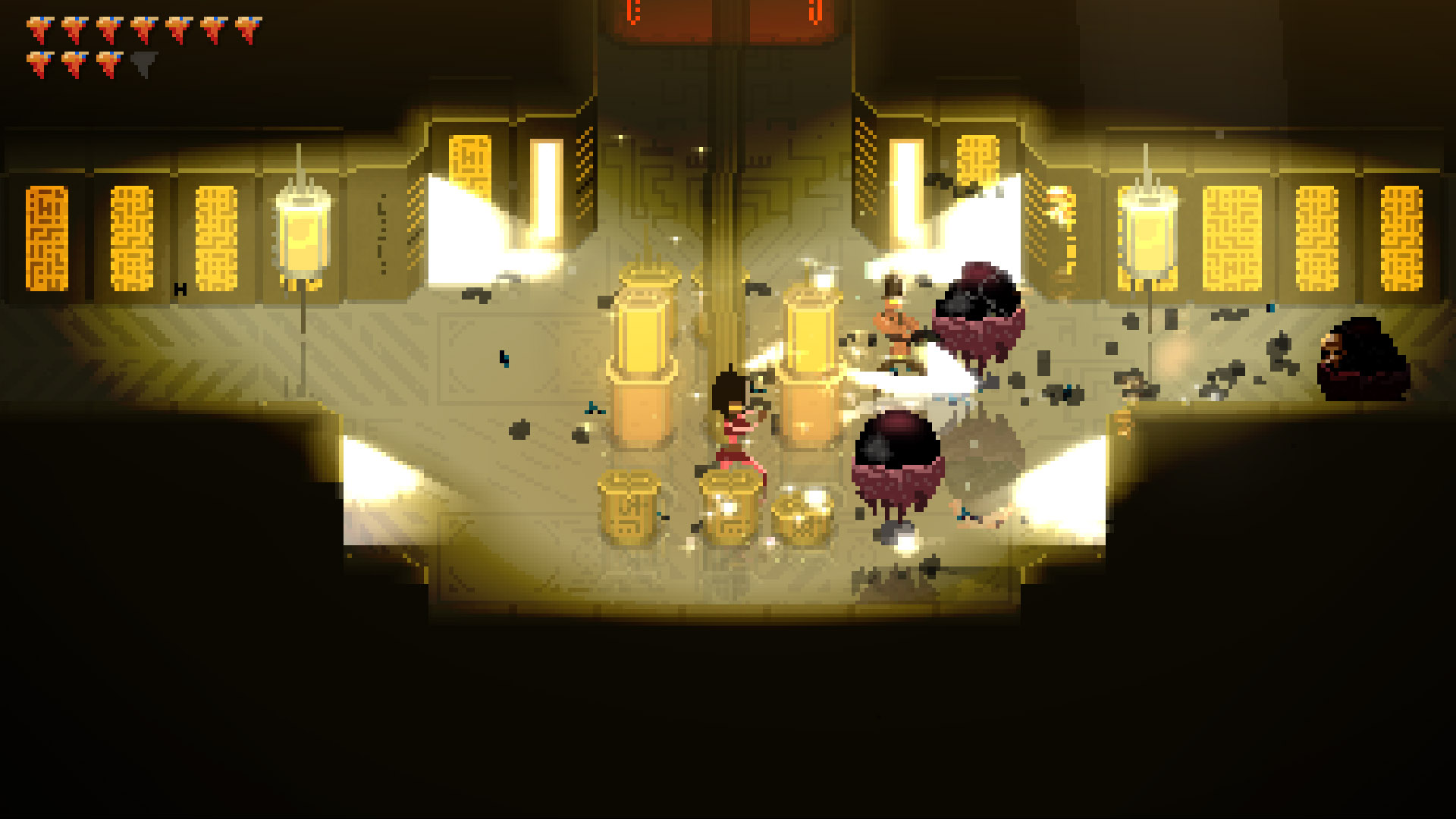 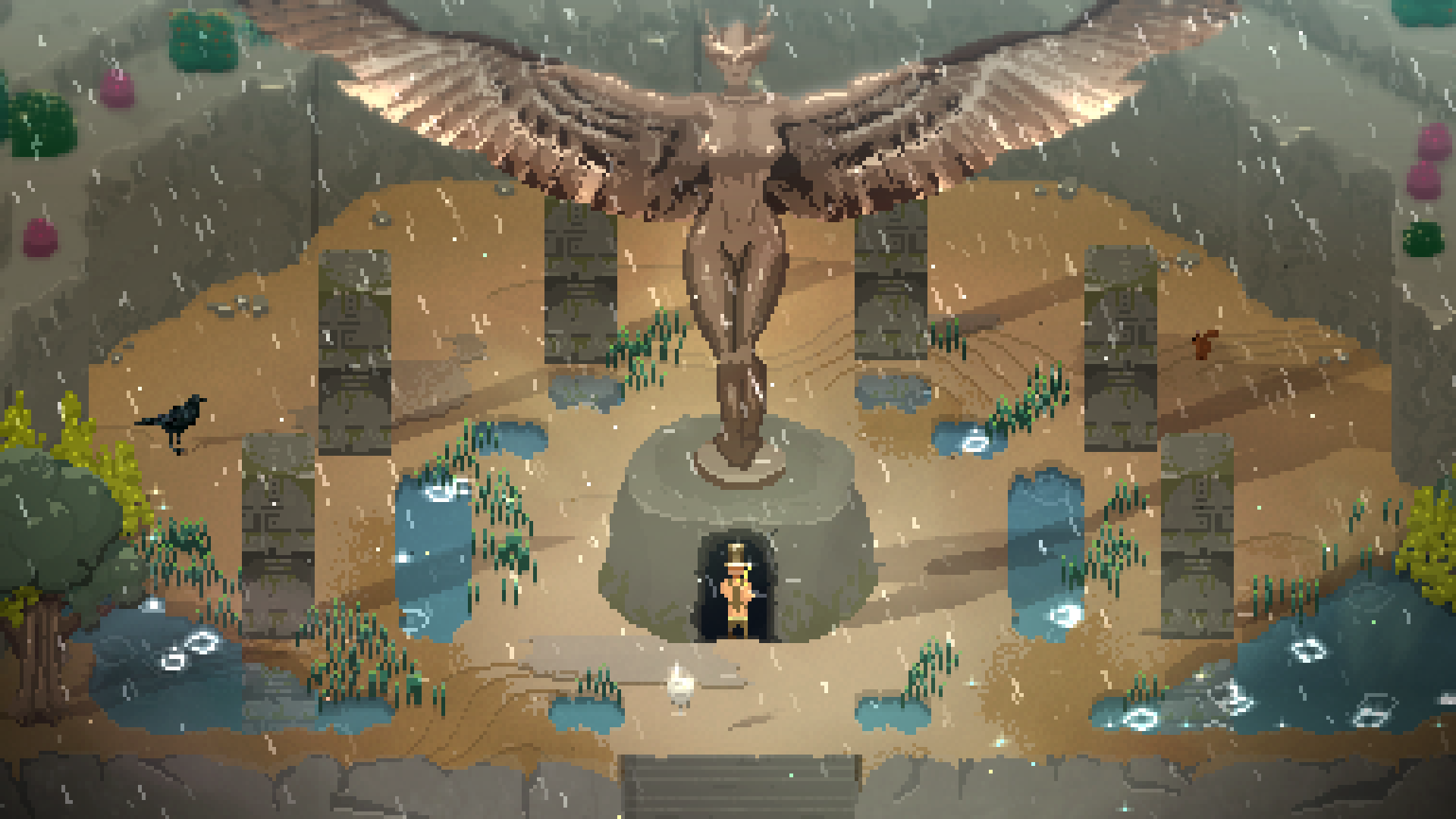 My first world in Songbringer was with the word LEMONS and it was terrible. There were so many enemies and the world was boring so after a couple on dungeons I decided to start again after I met a demon flesh wall that kept glitching and wouldn’t die. This time my world was built on UHOHNO and I got a lush swamp land filled with sea monsters that kept spewing poison at me. I stuck it out and found that upgrades were dropping plentifully. This was the world for me.

While the story in Songbringer is the same across all the worlds it’s obviously something that means a lot to the head creator, Nathaniel Weiss. The story delves into the downfall of the race of Ekzera and how Row fits into the story, unfortunately I felt like maybe I was a little too… grounded…for the philosophising the story gets into.

Songbringer is a lot of fun, gameplay is quick and the world is fun to explore for the most part. It feels like it is created for multiple playthrough’s but once I made it through my second world I didn’t feel the need to go again. Had my first world not left me stuck, I may not have ever seen a second world. Fans of retro style indie games will find a space for this in their library, but again I can’t imagine even those fans going through the slog on a second world… and if they do it will be to just have a look at what else they could have ended up with.