South Park: The Fractured But Whole Review – Get ready to be offended

When people think of South Park most assume it’s a show about seeing who can be offended the fastest and the worst. However, as the years have progressed, creators Trey Parker and Matt Stone have honed the series to be more of a comedic and satiric commentary on todays’ social subjects. Their latest game The Fractured But Whole is a combination of both with a return to their classic storytelling, appearing to have fun with the South Park franchise and its themes, but also using their platform to address subjects of racism, transphobia, and a world gone mad with political correctness (albeit in their own ‘special’ way). Of course, it is a South Park game so for those who are squeamish and easily triggered, player discretion is advised as it is definitely not a children’s game, despite the way it looks.

Immediately following the events that took place in The Stick of Truth, The Fractured But Whole, follows ‘The New Kid’ and Cartman’s cohort of pint-sized superheros as they search for answers, and money, after South Parks cats all go missing. It’s up to you to explore South Park’s seedy underbelly of organised crime and bring down those looking to disrupt the idyllic peace all while building up hype to help Cartman realize his dream of creating his own superhero franchise, with The Coon at the forefront. While it’s inessential, a basic viewing history of the past seasons will help you keep up with some of the more farfetched themes of this game.

The battle format of The Fractured But Whole has been updated to feel more like a role playing tactics game where you’ll have limited number of spaces to move your chosen players around in, before executing a move. In the beginning this felt slightly tedious, but as the game became more difficult and I received more players to aid me in my pursuit of answers, it actually became rather enjoyable. Because there are several different hero classes with Brutalist, Blaster, or Speedster being the first three I could choose from while playing, I found myself taking longer deciding what path I’d like to take. Luckily a player can change classes simply seeking out The Coon and requesting a change, so if you find a certain class doesn’t fit you well; it’s very easy to modify. 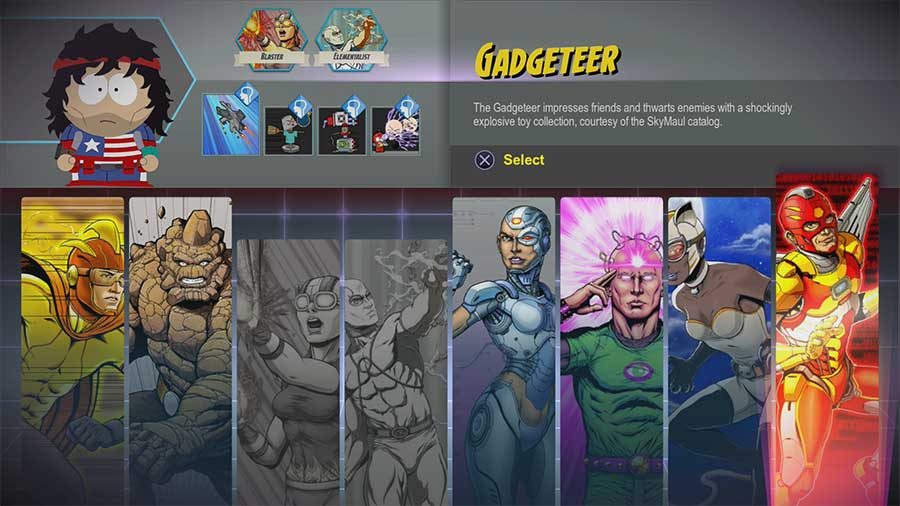 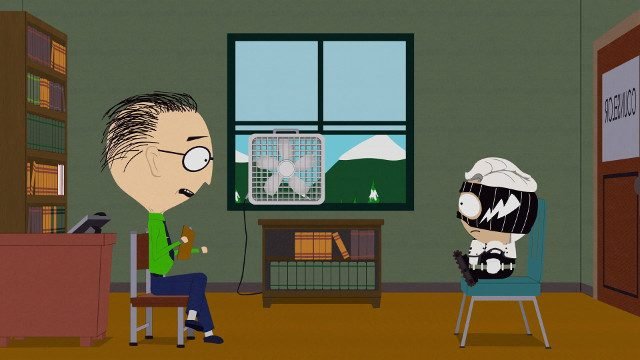 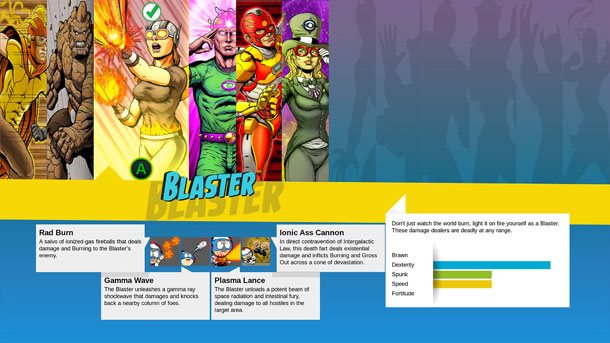 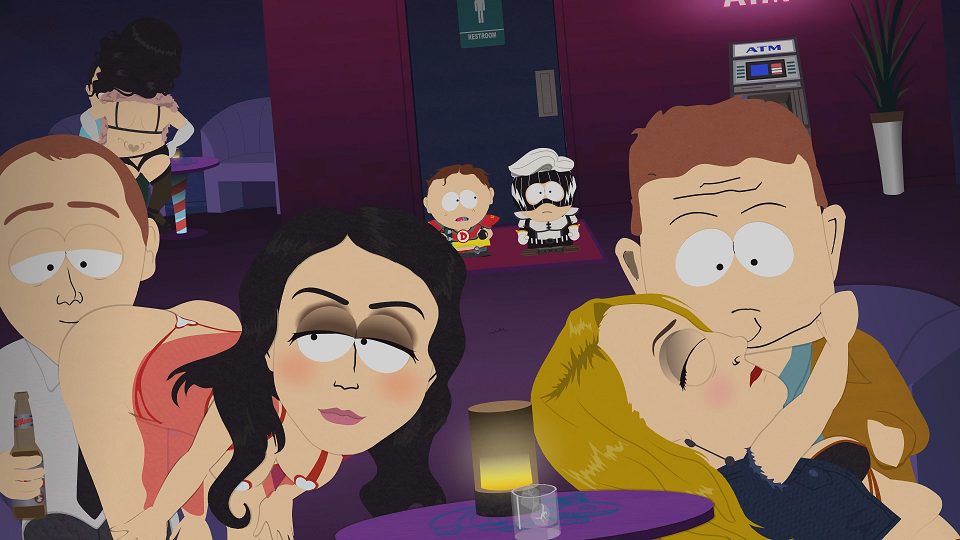 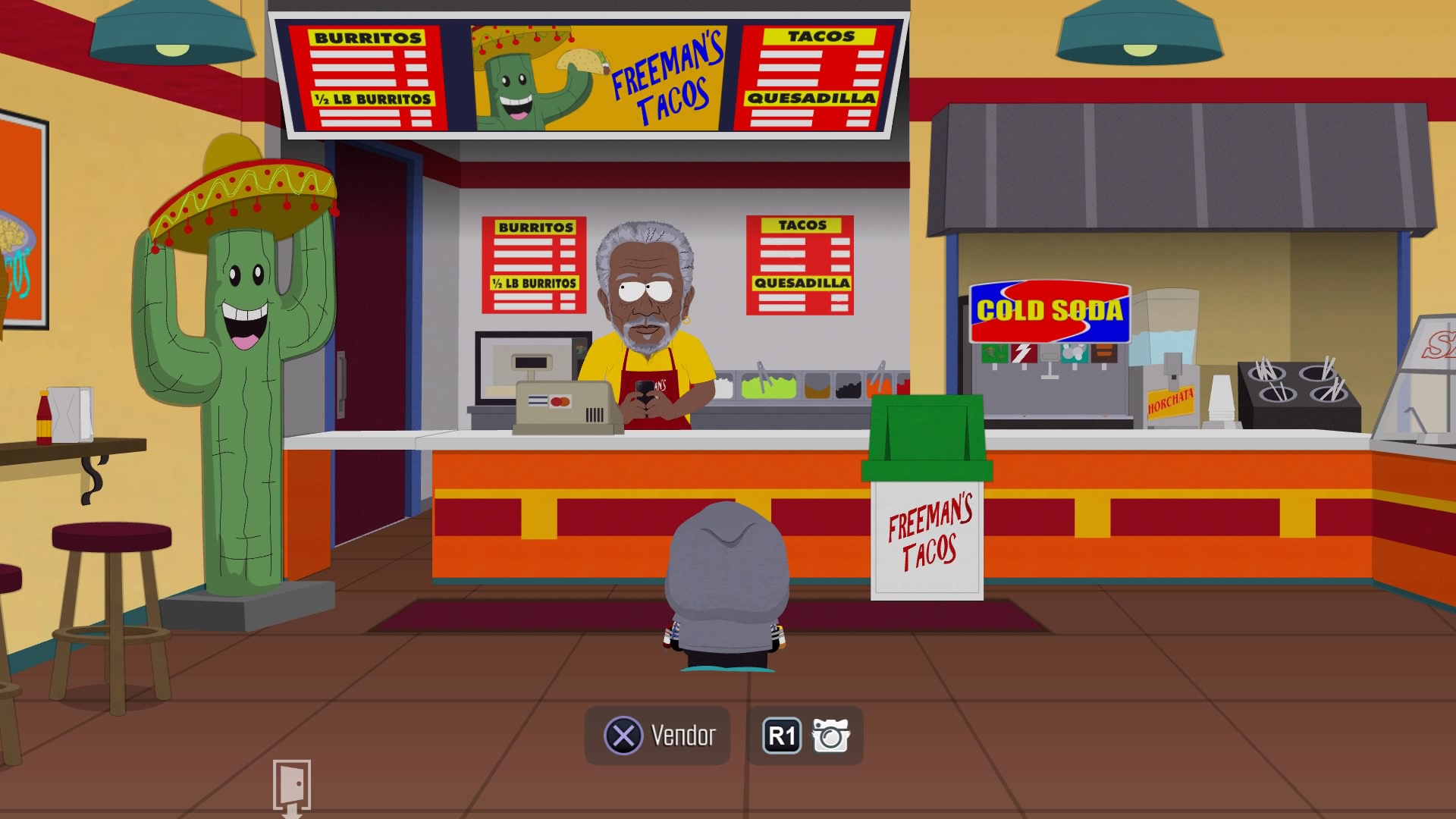 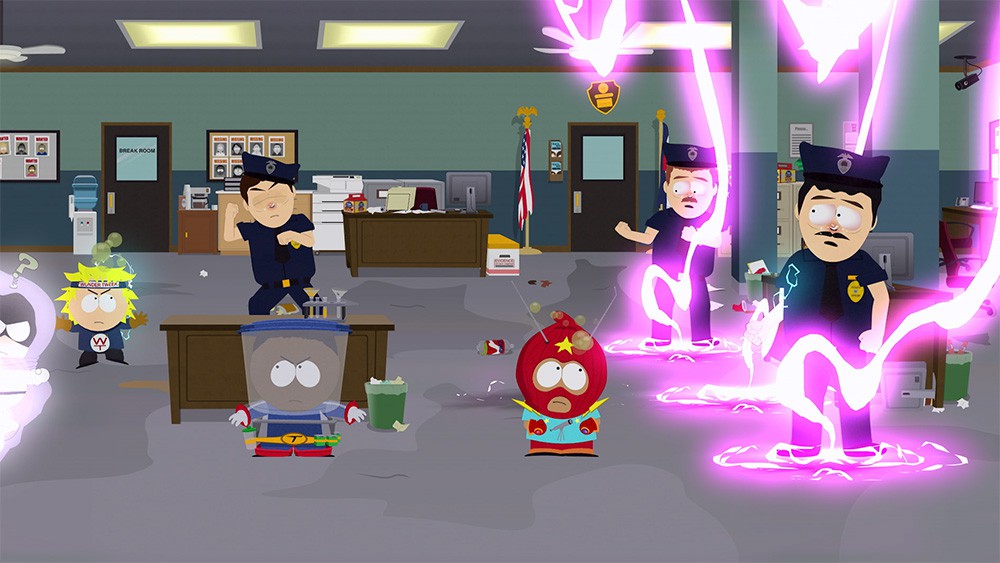 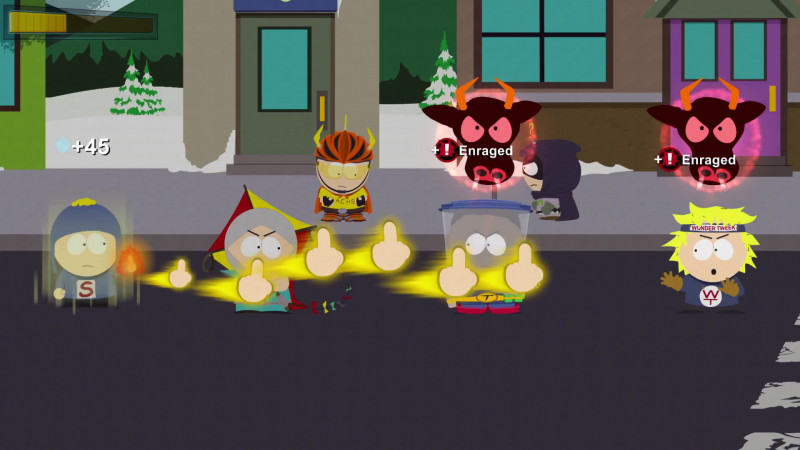 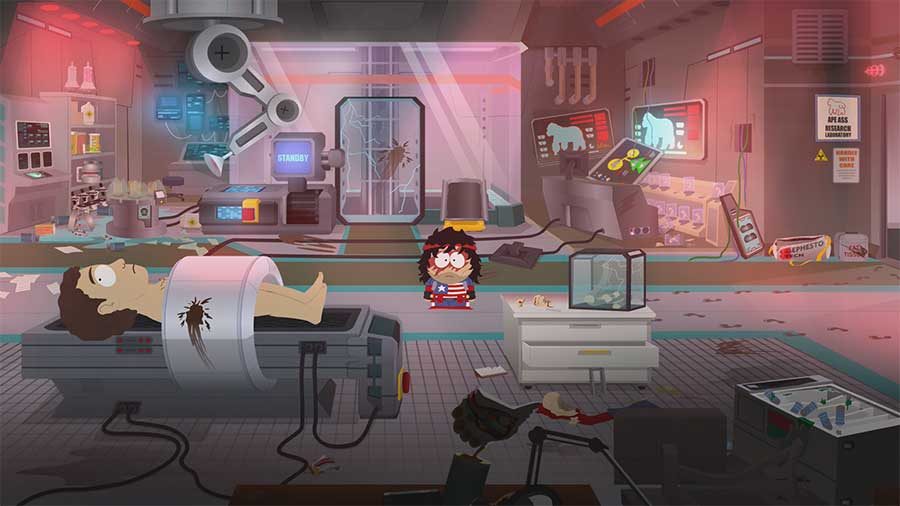 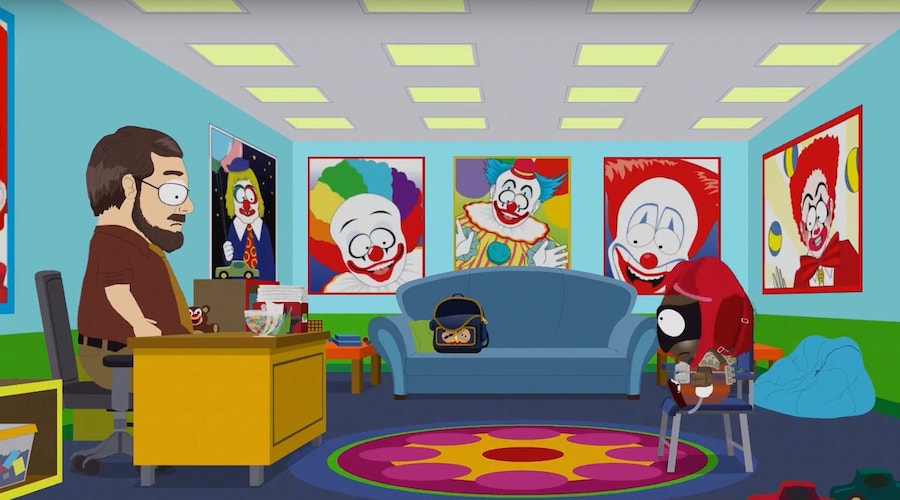 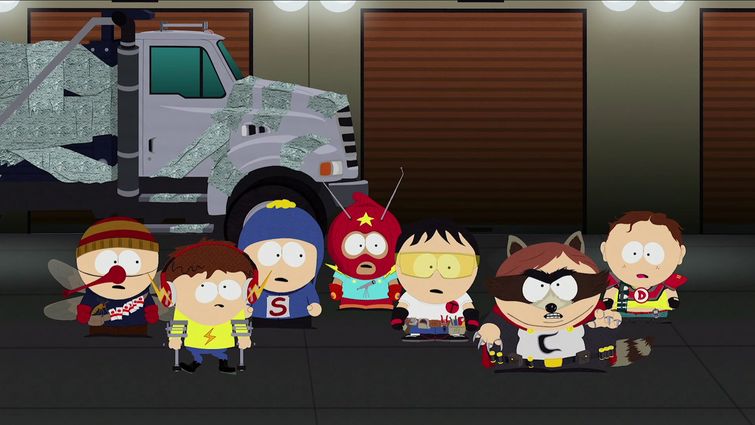 During combat you’ll have a number of attack options to choose from including mental, physical, projectile along with buffs to cast on allies and debuffs to cast on your enemies. I swiftly learned that to win in some of the harder battles you need to formulate a plan of attack and can’t just go in guns blazing, otherwise you severely pay for it. Depending on who your enemies are, it becomes essential to choose your four man team with care and balance; simply attacking would mean an early demise in several cases. This made gameplay much more interesting as I was never overpowered as the game progressed and I always fought with an air of caution.

As you level up you are able to equip certain items to both increase your stats and attack abilities, allowing you to gain the upper hand in combat. It takes some getting used to however, as each item came with both pros and cons to adding them, but I enjoyed working out beneficial combos. Of course it wouldn’t be a South Park game review if I didn’t mention the ability to attack an opponent with the power of your farts. Like in Stick of Truth, The Fractured But Whole grants you the ability to use your gassy expulsions to distort and reverse time when in dire situations or instead use them to explore hard to reach areas.

“What really fascinated me throughout the game, after selecting my gender, was the way in which dialogue was handled.”

One of my favorite mechanics of The Fractured But Whole was the freedom to constantly change my characters appearance. At the beginning, I selected a male avatar and built up their look in likeness to my own, but after deciding to elect a non-binary gender my look constantly changed and evolved as I delved into more androgynous looks. What really fascinated me throughout the game, after selecting my gender, was the way in which dialogue was handled. There were both subtle and not-so-subtle comments made about my appearance and also some battles that were clearly made to happen if you selected a gender option that was not male in the beginning. Of course the difficulty slider was no longer linked to the color of your skin in the end but from what I saw, the way in which people interacted with you changed based on it.

Item hunting and money collection, while slightly tedious at times, proved to be very important as I required certain items to help progress through the game or gain additional followers on ‘Coonstagram’, the social media mechanic that helped bolster my influence. It was through this that I got to explore a lot more of South Park and enjoy some hilarious side quest moments that really helped to flesh out the storyline, which was slightly shorter than I had anticipated.

The best and worst thing about The Fractured But Whole was the fact, that when played, the game was like one big South Park episode. This essentially means that if you consider yourself a fan of the series and watch it on a regular basis you are going to get more out of it, conversely if you don’t watch the show, then you’re bound to miss out on several nuances that only a South Park fan would recognise. Another issue I found while playing was that despite the change in battle style and mechanics, the game felt at times a little too simplistic. Your attack repertoire was limited and became slightly predictable as time went on. Thankfully the option to switch classes helped to alleviate some of the monotony within it. Finally, it wasn’t made clear to me when certain side quests were unable to be completed, and sometimes had me pulling out my hair wondering “why make it available to me if I lack the necessary skills to complete it?”

South Park: The Fractured But Whole is an enjoyable game that certainly has made me both laugh out loud and uncomfortably cringe all the way throughout. The battles against questionable priests and over-exaggerated sex workers did sometimes make me think, “ohh they really went there with that”, but honestly I wouldn’t expect anything less. It’s certainly a game made for fans of the series, and while it doesn’t shy away from controversial topics, it also has some more touching and sentimental moments creating a great balance and making it much easier to simply laugh off some of the more crude aspects. If you’re a fan of the television series or simply have a wicked sense of humour, South Park The Fractured But Whole is certainly a game you’ll spend several hours enjoying.