Aloy has returned to Gorilla Games’ smash hit, Horizon Zero Dawn, with the release of the games first expansion, The Frozen Wilds. Not only is she back but she’s reminding everyone exactly why we fell in love with her and this game in the first place. There’s no denying that Horizon Zero Dawn captured gamer’s hearts and blew critics away when it first released with its beautifully designed and expansive open world. Not to mention a strong female protagonist and a diverse supporting cast that work to create an empowering and positive example of women in gaming. The game not only set standards for positive representation but set standards for open world RPGs in general.

The Frozen Wilds takes place within Horizon’s main campaign and is accessible around the middle of the game. For this reason alone it’s worth noting that The Frozen Wilds is NOT end game content, but rather an extension to the main story itself. Adding a new location called “The Cut“ where the nomadic tribes of the Banuk live, the expansion very aptly suggests that you be level 30 before attempting to venture there. With this I can fully agree. After coming across the first new creature of The Cut (A Scorcher) I struggled, even with my end game character. It was definitely a shock to the system and something I wouldn’t want to attempt at a lower level. Also included in the expansion are new items and a new skill tree called traveller.

“One of the things Horizon did exceptionally well for a new IP was establish deep and interesting lore, and it’s the same again here in The Frozen Wilds.”

One of the things Horizon did exceptionally well for a new IP was establish deep and interesting lore, and it’s the same again here in The Frozen Wilds.

As you play through the story and generally search around you once again unlock sound files and logs filled with information (for those dedicated enough like me to read it all). Every character you meet is a rich source of knowledge which help build on the history and expanding storyline of the game.

In The Cut you’ll be faced with icy winds and snow so deep it buries almost everything. You’re also fighting to save the day from the new mysterious ‘Daemon’. You head off to meet the nomadic Banuk only to receive a cold reception as an outsider. But as always you’ll soon make some fantastic bonds and friendships that were honestly amongst some of my favourite moments from the main game and have again been some of my favourites in the expansion.

As I mentioned earlier, my first experience in The Cut was against one of the new creatures, a Scorcher. Essentially the Scorcher is a giant wolf like machine that spits fireballs. This makes for a deadly combination for those not levelled high enough to traverse The Frozen Wilds or for players returning to the game after an end game hibernation like myself. It was at this point I was suddenly extremely thankful that I’d taken the time in my previous playthrough to get the shield-weaver armour that is obtainable in the main game via the Ancient Armoury quest.

Despite the allure and danger of these new creatures, there’s also a bunch of familiar ones from the game’s main campaign to worry about as well, however they aren’t as you remember them. Now hyper aggressive and tagged as Daemonic Machines, you’ll do well to keep your wits about you.

The introduction of the Daemonic taint upon the machines is a premise that Horizon players will recognise and be familiar with from the main game where Aloy was battling the Corruption. Although here in The Frozen Wilds it’s Daemonic Machines Aloy must be concerned with and all this disturbance and machine aggression appears to be linked with the mysterious Daemon. 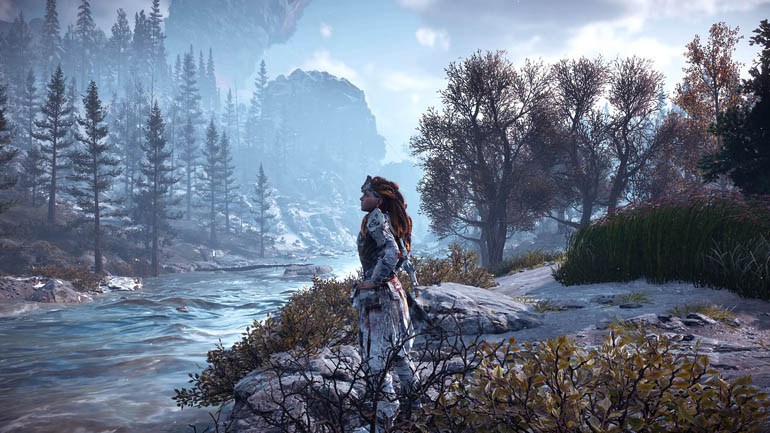 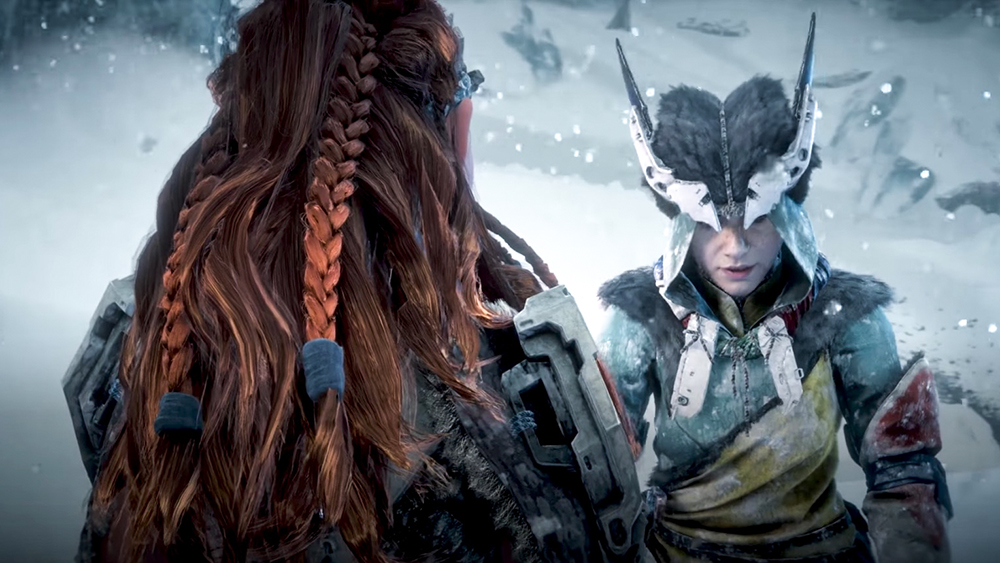 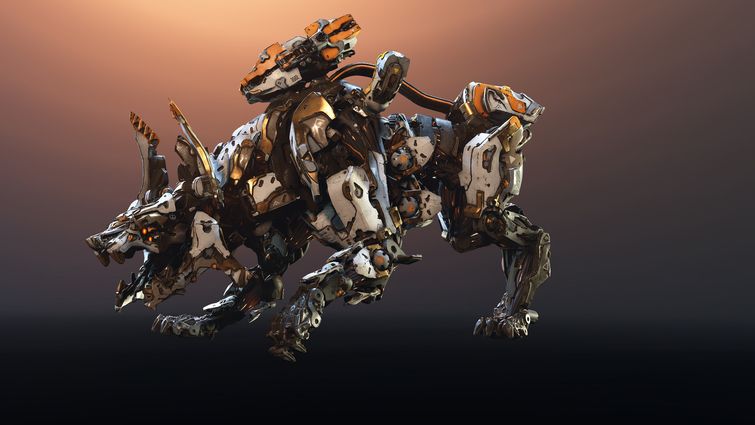 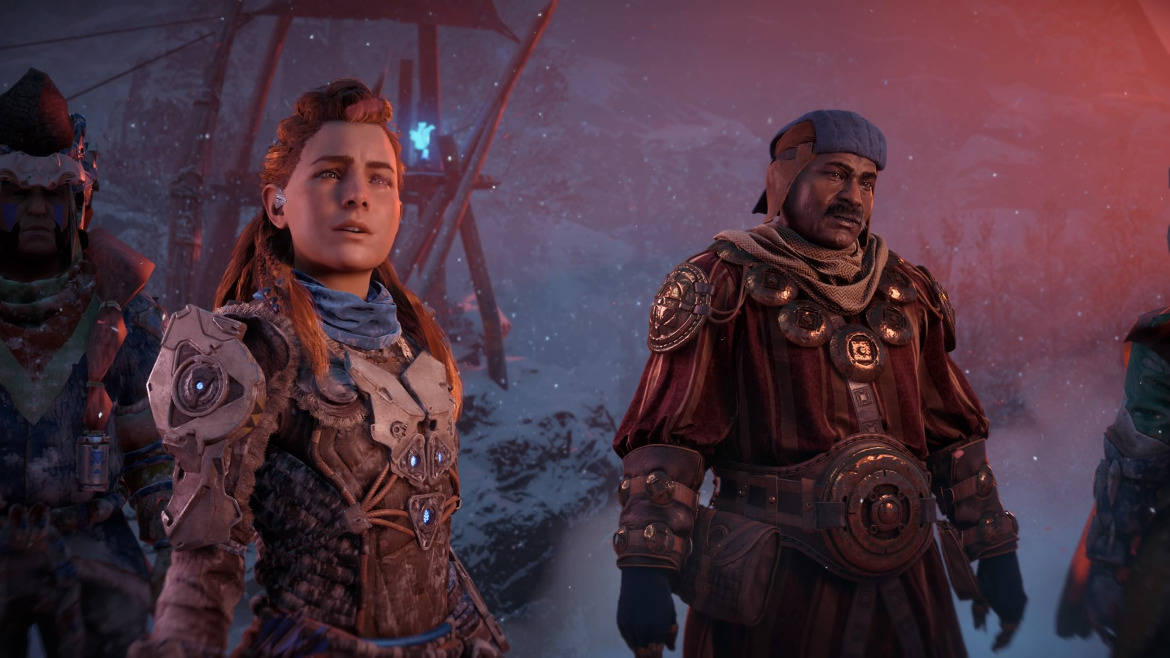 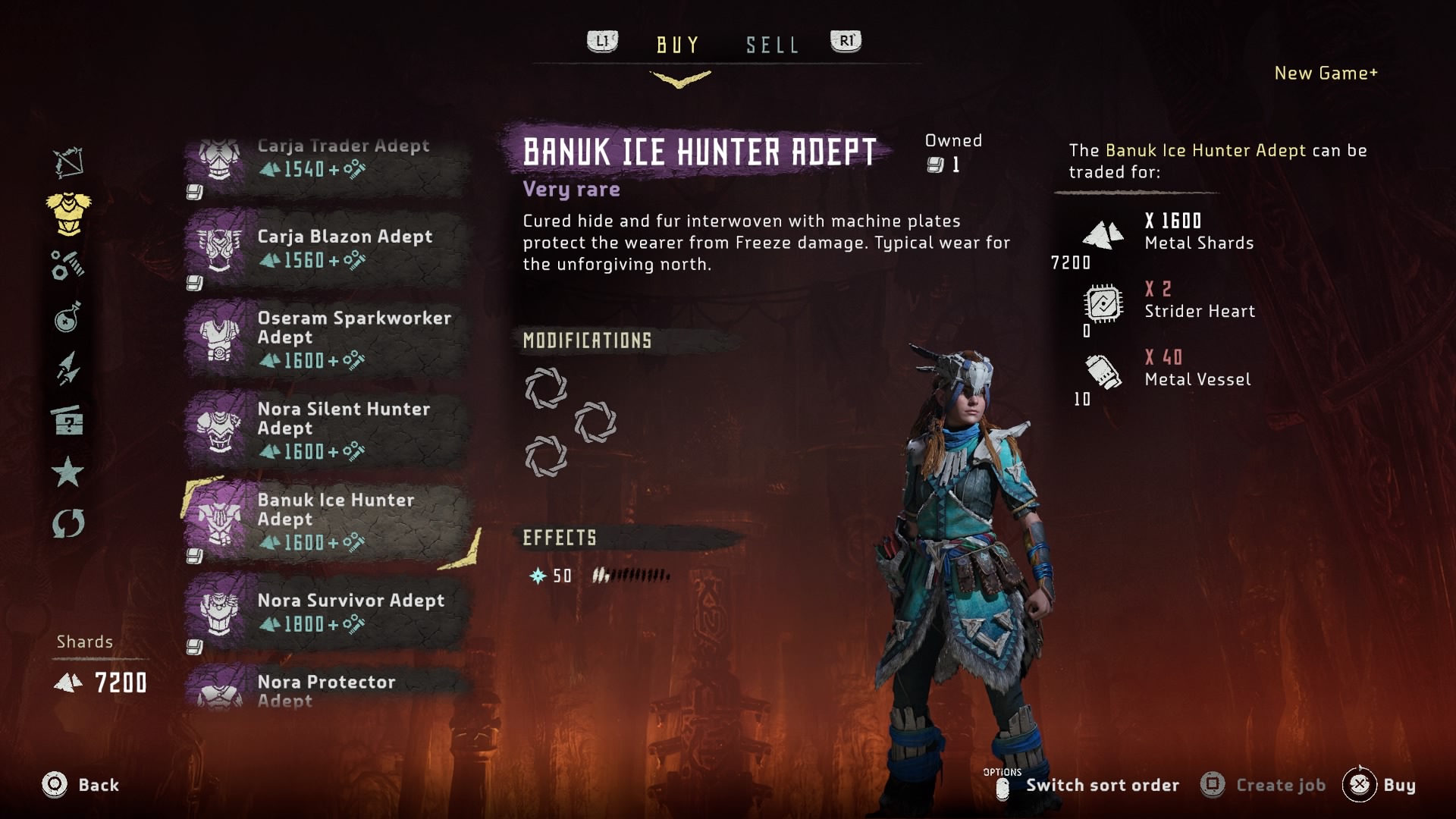 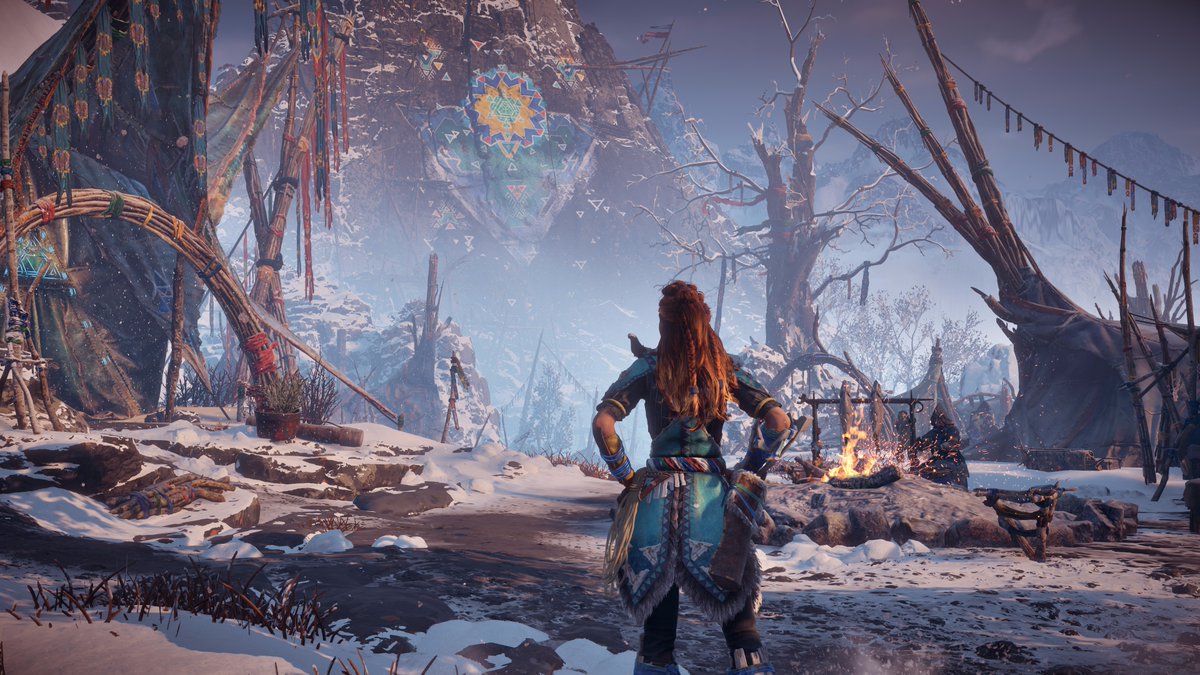 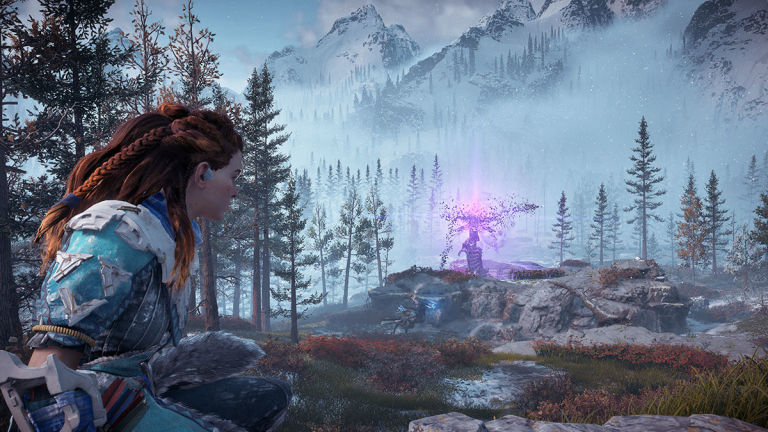 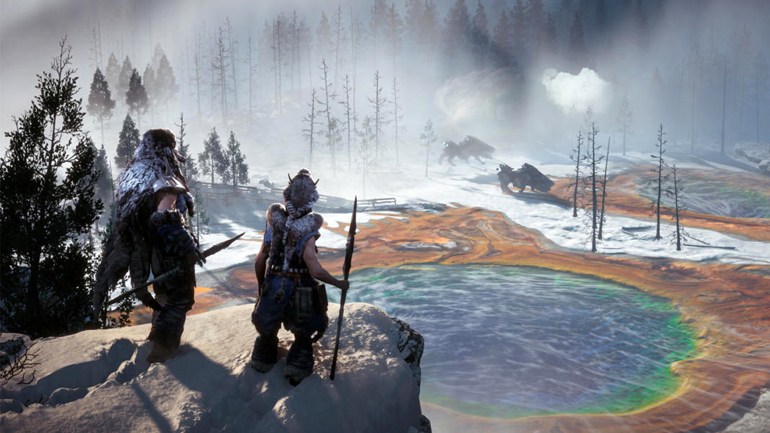 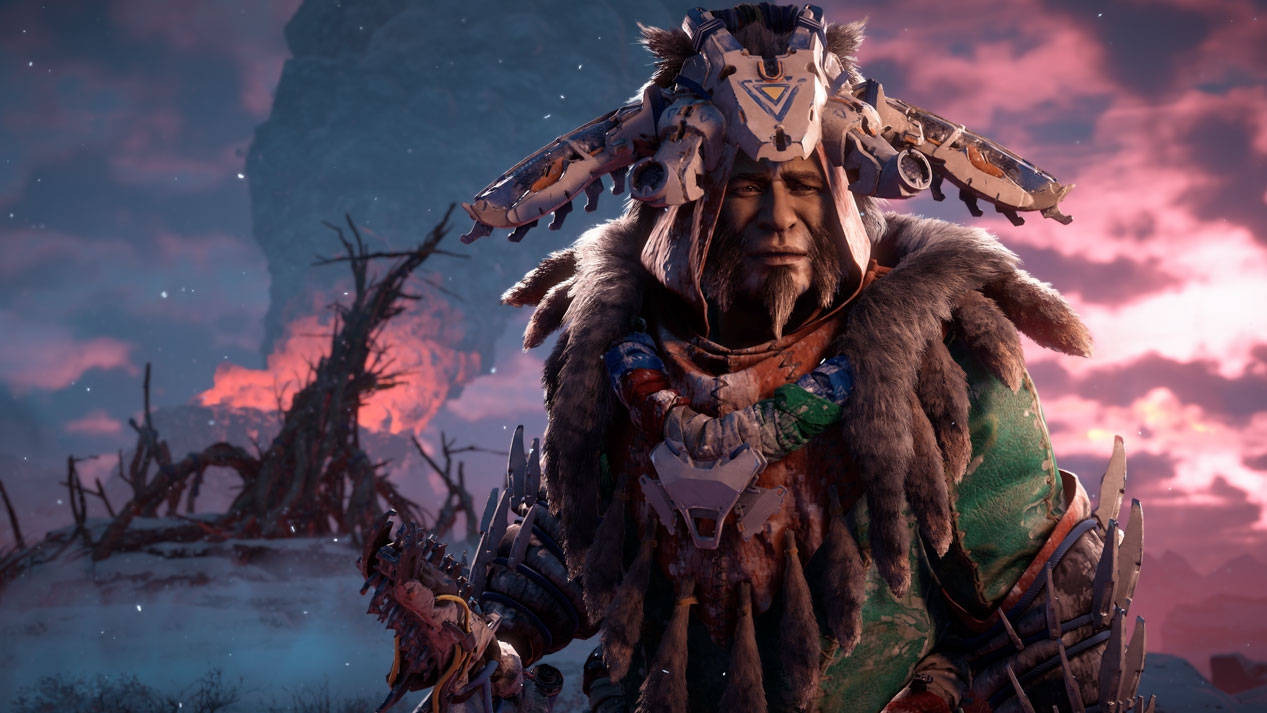 Horizon Zero Dawn: The Frozen Wilds’ new cast of misfit characters has particularly captured my heart this time around. Whilst there were particular stand outs in the main game, characters in The Frozen Wilds definitely have a much better sense of humour and seem more endearing. It’s true that it’s simple enough to forge on with the main game of The Frozen Wilds, however the side quests really shine through with some excellent comedic moments which for me were lacking in Horizon itself. Moments such as  a haphazard and lovable explorer called  Gildun and a bumbling yet hilarious new Werak of Banuk trying to make good on a deal and looking to make a name for themselves, temporarily known as ‘The Burning Turkeys’.

As you progress through these quests and the new locations you’ll begin to notice that the Banuk deal mainly in a currency known as Bluegleam. This is a pretty frozen gem that’s located on fallen mechanical beasts scattered through out the Frozen Wilds. Sadly it also renders the hoard of shards you’ve been stockpiling away since the main game basically useless. Thankfully Guerilla Games have made up for this by providing enough Bluegleam in The Cut for all your needs, you’ll just have to get a map first.

Looking at that map of The Cut and the world laid out before you in The Frozen Wilds will have you awestruck by how much detail the developers have put into the environment here.

These new snowy expanses look fantastic and the wilderness is absolutely filled with new wildlife from badgers, squirrels, owls and mountain goats (I’m yet to find a rabbit so make sure you’ve got all the rabbit you need). Every inch of the snow covered lands has been carefully thought out here. The large snow drifts that cover the ground differ in depth in places and Aloy’s movements look more laboured as she makes her way through them, deforming the perfectly laid snow around her feet. The sound is even perfectly calculated as you crunch into the snow as you walk and the way the wind kick up particles of snow looks simply amazing.

All this frozen beauty encouraged me to take endless photos of the beautiful winter landscape and with the addition of Aloy getting some adorable new emotes I can see many of you out there doing the same and taking either endless photos to capture the frozen beauty or simply make adorable and cute snow angles with Aloy.

For all that I’ve raved about the graphics and visuals of Horizon Zero Dawn: The Frozen Wilds, graphics do not make the game. Whilst The Frozen Wilds doesn’t contain the same level of depth in its story as the main game did, it’s most definitely filled with enough powerfully written and emotional moments to satisfy.

It’s going to take some time for you to get back into the swing of things, you’ll likely use your materials all too fast and have to return to more arid locations to do a hunting restock. This is a good thing as it will also give you time to become familiar with the flow of things once again. Overall though Horizon Zero Dawn: The Frozen Wilds is a strong addition to an already strong game. It feels like a natural extension and isn’t at all ill placed if you do it mid game or after game completion like myself. For those who are paying attention, the timing for The Frozen Wilds does place nicely for Horizon Zero Dawn and the Game of the Year Awards, but for me it was already a perfect contender. I’m simply happy I get to spend more quality time with one of my favourite gaming female protagonists.