Sonic the Hedgehog first debuted in 1991 a mere 26 years ago. Anyone that has grown up will tell you that by the time you turn 26 you have faced all sorts of challenges. One of the key challenges everyone faces is identity, and Sonic has been no different. Sonic sat out the innings that were the 32 bit era and by the time he returned, Mario was already 64 bits strong and the world Sonic knew was gone.

Sonic tried to make the jump to 3D with Sonic Adventure and its sequel. Both are great games in their own right but they just didn’t capture the magic that was Sonic. What followed have been a bunch of here and there titles that have received a mixed reception at best. Sonic Generations came the closest but it just didn’t quite reach the bar Sonic had set for himself originally. Then we make it to 2017.

Two titles released, Sonic Mania earlier in the year and Sonic Forces towards the end. Sonic Mania is critically acclaimed but treads the familiar ground that was the 90’s. Sonic Forces however is a full sized and full budget Sonic Game. Four years in development for any game is cause for a concern. The question is, has Sonic finally made the transition? 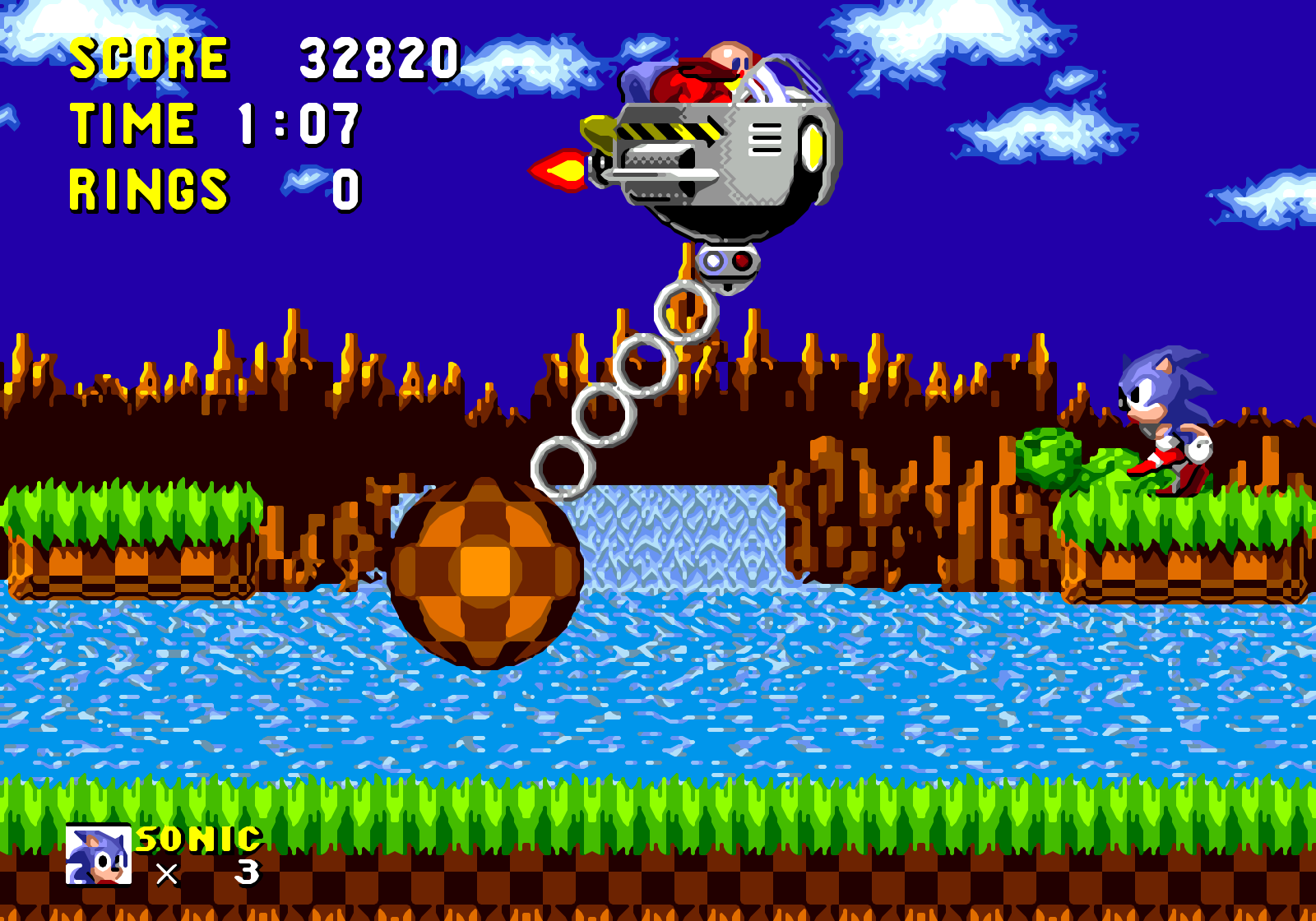 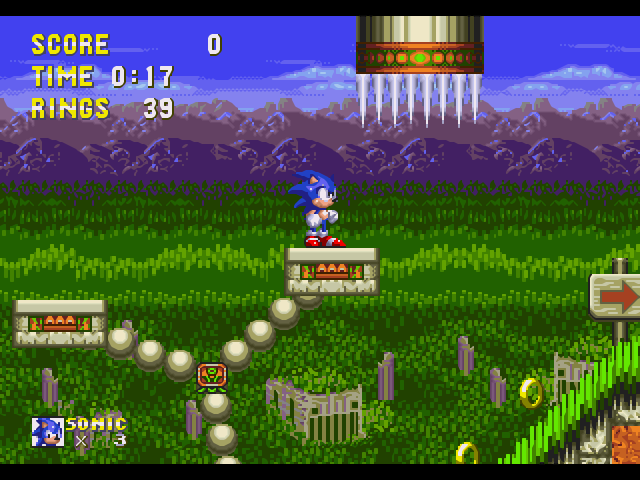 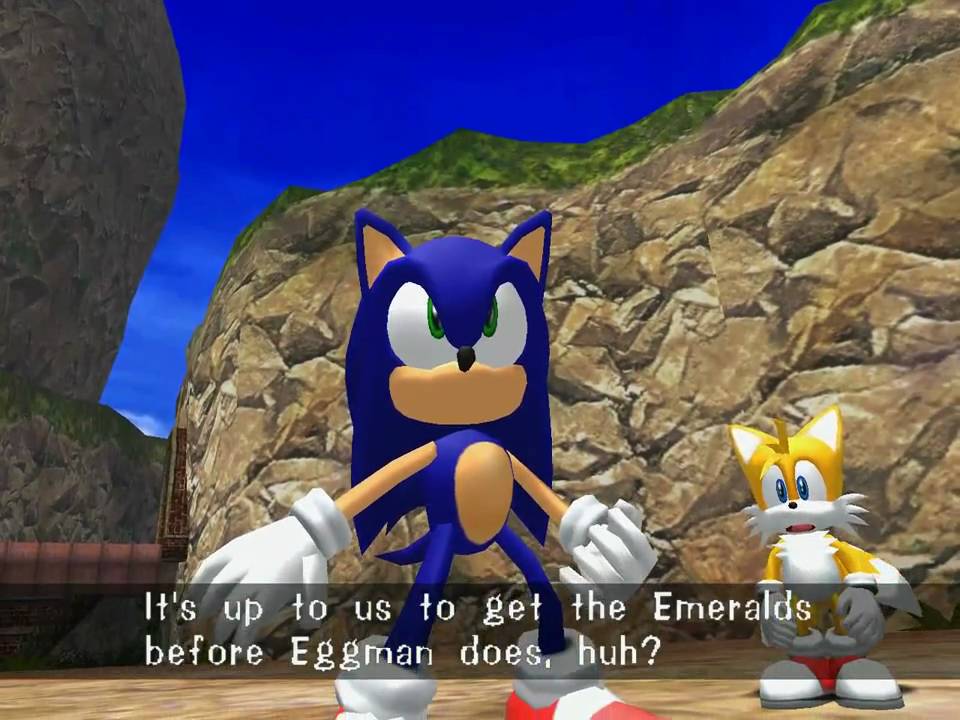 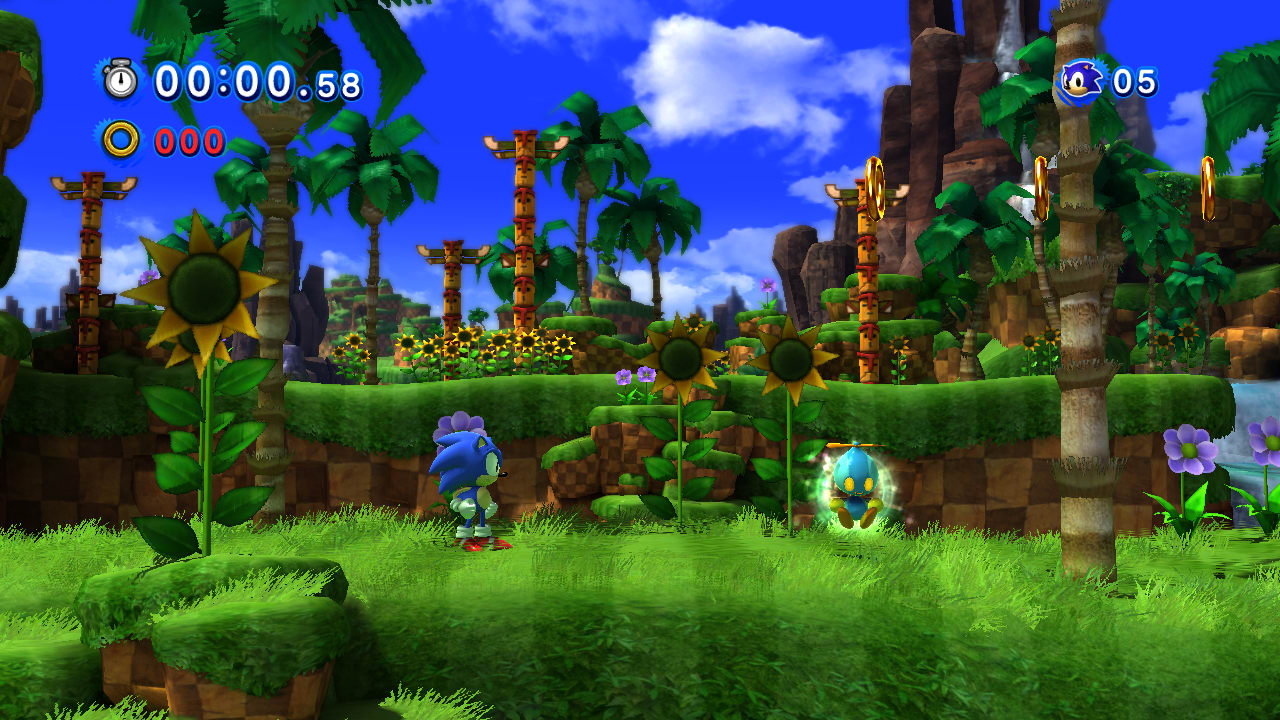 Without giving too much away, the premise of Sonic Forces is as follows: Dr Eggman has discovered a power source that has allowed him to make his ultimate creation, Infinite. As a result he is the closest he has ever come to actually taking over the world. Luckily, there is a resistance made up of characters from the Sonic universe (including classic Sonic) and you. You create a character and join the fight. The gameplay is split essentially across three kinds of stages. Your character/modern Sonic stages, classic Sonic stages, and boss battles. Sonic Team clearly are aiming high, but how does it play?

Graphically, the game looks amazing. Particularly the third person avatar/modern Sonic levels. There is always a lot going on in the backgrounds. The stages are almost on rail runners with spectacular set pieces set throughout and side scrolling sections. With modern Sonic, you hit the boost button and scream through the levels. With your avatar, you replace Sonic’s speed with a range of weapons, from a Flame Thrower to a Lightning Gun. Each have their own special moves.

As far as the Soundtrack goes, it sounds great. The tracks are well matched to the levels and the bosses all have their own theme song. Sonically, the game’s tunes range from rock to electro and enhance the speedy vibe that is characteristic of a Sonic game. Almost worth purchasing and downloading to put in your good morning playlist.

Visuals and sound aside, the gameplay is a mixed bag. You go forward and face an odd branching route. Ultimately the tendency is to hold down the boost button and just run through your enemies whilst dodging obstacles. The levels play like the first 3D Sonics, which are now 16 years old.They miss things that are now standard. Controllable camera is missing from Sonic Forces and its severely missed. Skills such as the homing jump are still present, originally designed to assist gamers with hitting enemies when distance perception is an issue.

The classic Sonic side scrolling levels should be a welcome addition. Stages such as Green Hills are present with nicely updated graphics and tunes. There is a problem though. After spending a few stages wondering why it didn’t feel right, I realised they had fixed Sonic to the centre of the screen.

If Sonic moves even a step, the screen does too. You jump and the screen moves. The result of this is that if you are trying to jump and change direction (to land on a platform) the screen scrolls back, making it quite disorientating. It feels like the stages are moving around Sonic not the other way around. Once you notice this fact, it just becomes impossible to miss. To be really blunt, my opinion is that the programming on these levels is lazy, disappointing and it ruins what should have been a retro treat.

The game also brings along boss battles. Interestingly enough, for me these are a high point of the game. For the most part they are absolutely spectacular and enjoyable to play. One of my favourites involved chasing Infinte along a snake. The screen spins 360 degrees as you curl from its tail to its head and back again.

Another features an enemy that uses reality altering weapons that give the appearance of crossing over into another dimension for a few seconds. I was chased by a giant crab piloted by Eggman and there are many more stories where those came from. I’m not sure if Sonic Team used that old ‘one team does levels, another does boss battles’ formula. But whoever made these, should get to design the next Sonic. 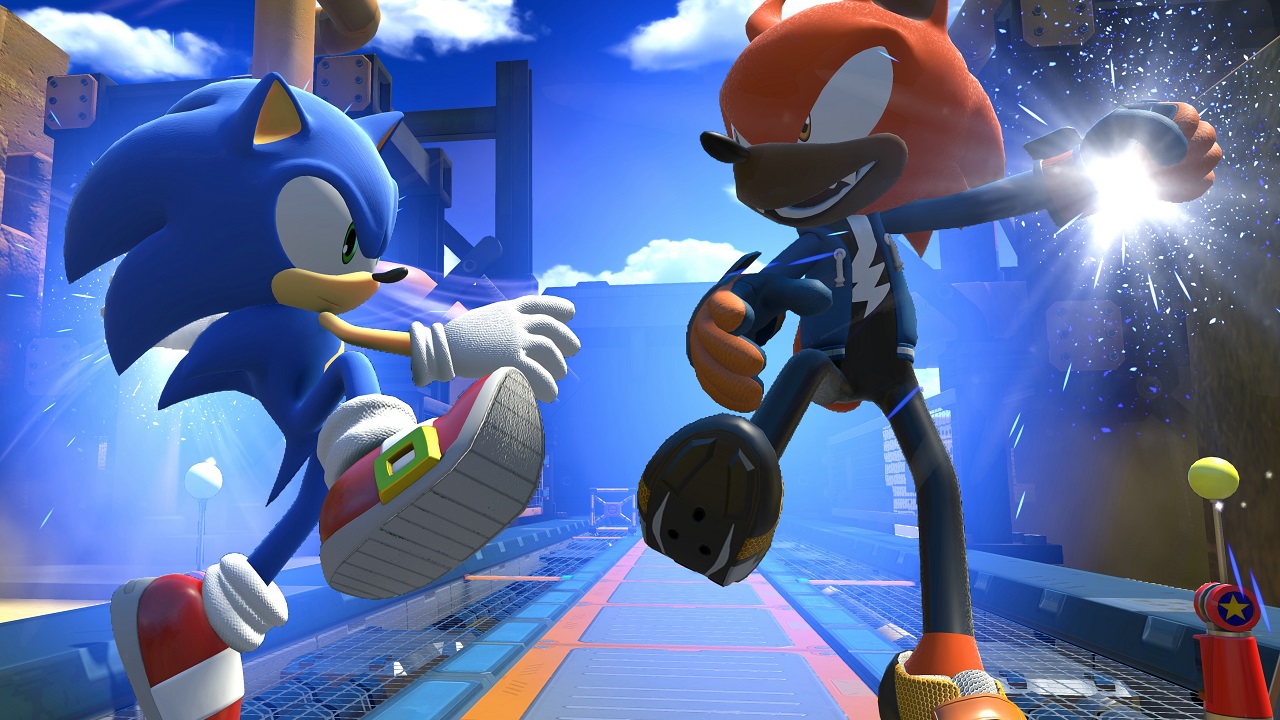 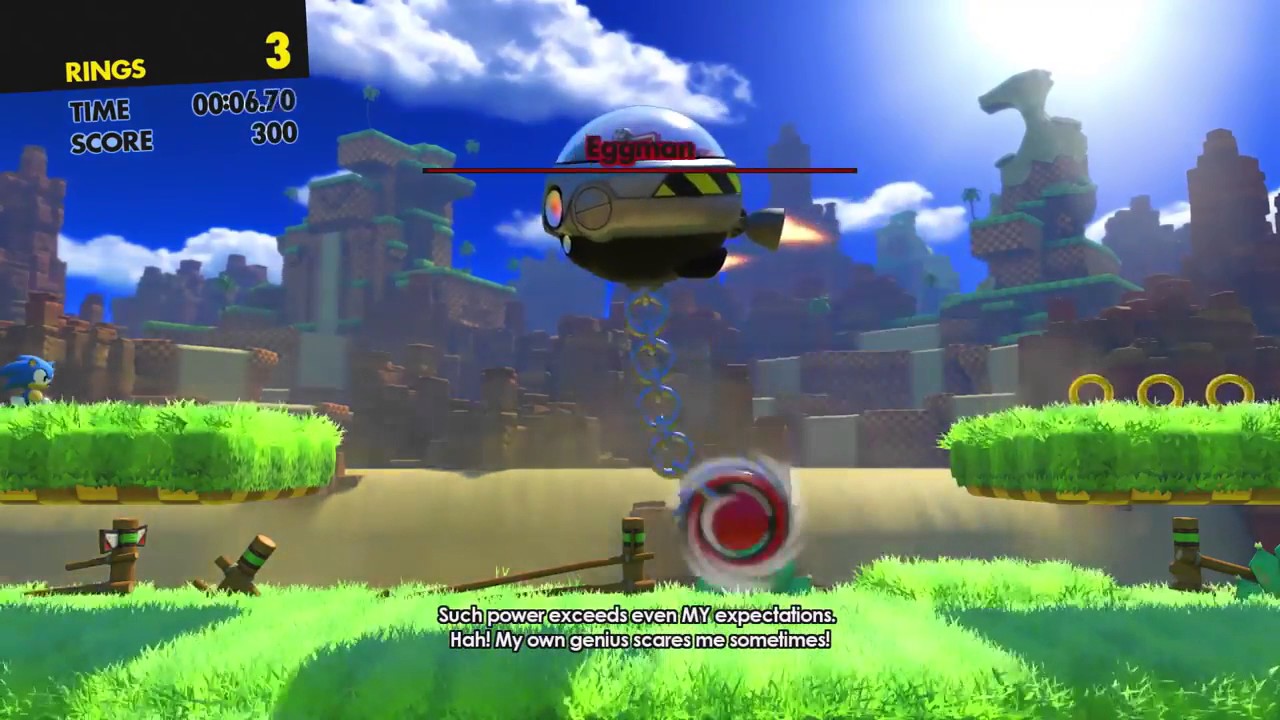 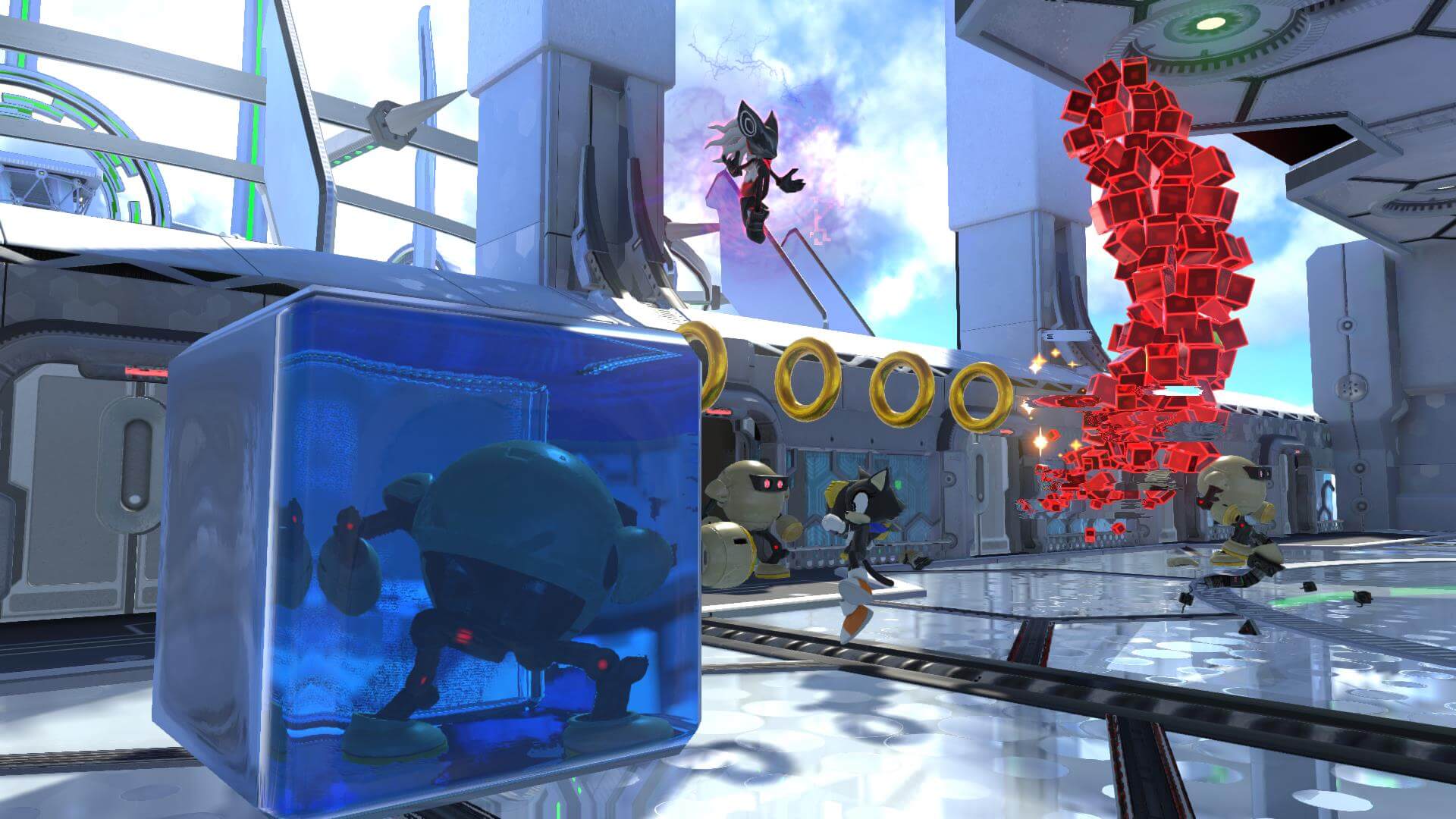 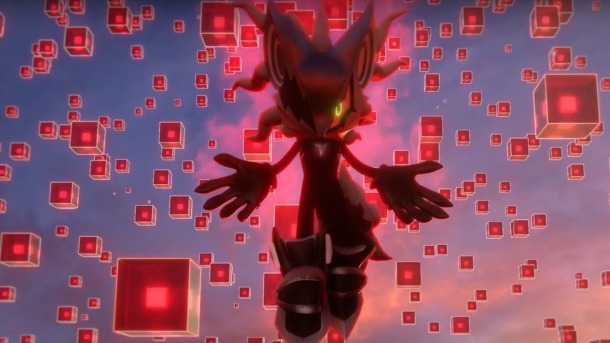 A key feature of Sonic Forces is that you get to create your very own character, a custom character to join the fight with the rebels. You get to choose from a number of different animals, choose colours and outfits. An interesting point is that this is not optional. In fact, you will play most of the game as your created character.

Created characters move slower than Sonic and this is compensated by the use of a weapon. This was a little jarring at first. Why buy a Sonic the Hedgehog game and not play as Sonic? Initially the choices of customisation are quite limited but then as you play, each level unlocks more items to customise your character and some of them are really cool. Despite the initial shock of not being Sonic, eventually I grew to like my character and as I customised it more, I grew attached.

The only negative I can attribute to this is that Sonic Team should have made many of these options available at the start of the game. Sure, special items for getting an S score on a level would be great but if you are creating a character let the player go all out and build one from the start.

When you mix all of the above together you have a game that is classic Sega. They have big ideas and a willingness to roll the dice and take a risk even with their flagship franchise. But also, as is typical with Sega, ideas and vision is only one thing. Executing them as a coherent product is another. So what we have here is a game that when you play it feels like they are reaching for something, but in their quest they overlooked the little things that could have turned this game into something special.

When you play, you get what they are trying to do. But you also feel like the four years has resulted in a mash up of ideas that probably should have been in different games. It’s the classic case of where you make an average triple album, but in reality you could have distilled the tracks into one or two excellent ones.

Ultimately, Sonic Forces is a game that feels like an ambitious project that was obsessed with an idea but wasn’t willing to compromise when it came to execution. In that sense, it is an admirable and brave game to make. But also it again demonstrates that Sega will make the game it wants to make, not the game that that they are capable of making and will appeal to the masses. Sega outsourced the greatest hits because they don’t want to play those songs anymore. Sonic Forces takes more chances than its peers sometimes to its detriment. Overall a step in the right direction and it will be exciting to see where Sonic goes from here.