Spelunker Party! Review – Time to cave into your retro gamer

Spelunker Party! is an adorable little multiplayer classic arcade game with semi modern graphics by developer Tozai Games and published by Square Enix, that’s available now on the Nintendo Switch. A revamped version of Spelunker World, Spelunker Party! carries over many of its gameplay elements however does away with the free-to-play microtransaction model featured in Spelunker World and also makes use of a 4 player split-screen co-op instead of the previous 6 player, which is available both online and locally.

These aren’t the only changes to come to Spelunker Party!, the protagonist of the story is now Spelunkette instead of Spelunker, the overworld has been fully redesigned and is now separated into a world map with five stage maps and player lives have been extended to 5. The game also features all 100 stages from Spelunker World which are included alongside new extra stages and even the main menu has received the overhaul treatment. For those wondering about good ol’ Pooch don’t fret though because Pooch is still there to help you dig up equipment and whatever else Pooches nose can find.

Although the Spelunker series has gone through a few modifications and versions over the years Spelunker itself harkens back to the early days of Atari and games such as Dig Dug and Boulder Dash. A platformer that first debuted in 1983 developed by Timothy G. Martin and MicroGraphic Image, I might be dating myself a bit here but I remember actually owning the original Spelunker on my Atari back in the day and it was most definitely in the rotation of games I loved.

Whilst many years have passed since 1983 one thing has stayed the same and that is the core premise of Spelunker. It’s still the same game I played when I was a child; I guess you just cant mess with perfection. Set in a giant cave with the player starting at the top of the cave’s entrance, the objective is to get to the treasure at the bottom. In all the games the player must walk and jump through increasingly challenging parts of the cave, all the while working with a finite supply of fresh air, which can be replenished at various checkpoints. Delving into the cave’s the player will be confronted with hazards including bats, which drop deadly guano that the player must avoid, along with ghosts which haunt the cave and appear randomly, attempting to take the player to the shadow world.

But lets not spend anymore time in the past in the realm of retro, its time to cave dive right in to Spelunker Party!

“…don’t be afraid to die, death will happen a lot so get used to it!”

Although not a Triple A title, on the surface Splelunker Party! is actually quite an addictive little game, which becomes even more so when played with friends. It’s a fairly straightforward platformer, with light puzzle mechanics and some treacherous hazards thrown in for good measure that you’ll need to avoid. If there’s one piece of advice I can offer you if you’re planning to play Spelunker Party! on your own, it’s don’t be afraid to die, death will happen a lot so get used to it! Let me explain…

Spelunkette and Spelunker are particularly fragile. Jumping from too high of a height, falling bat guano, short falls and an ever decreasing oxygen supply all make for a cave grave and should you spend all of those brand new 5 lives Spelunker Party! offers, it’s a one way trip to the afterlife. This is all void however if you’re planing to play with friends as the 4 player multiplayer allows you to revive a fallen player (something that comes in very handy, trust me). 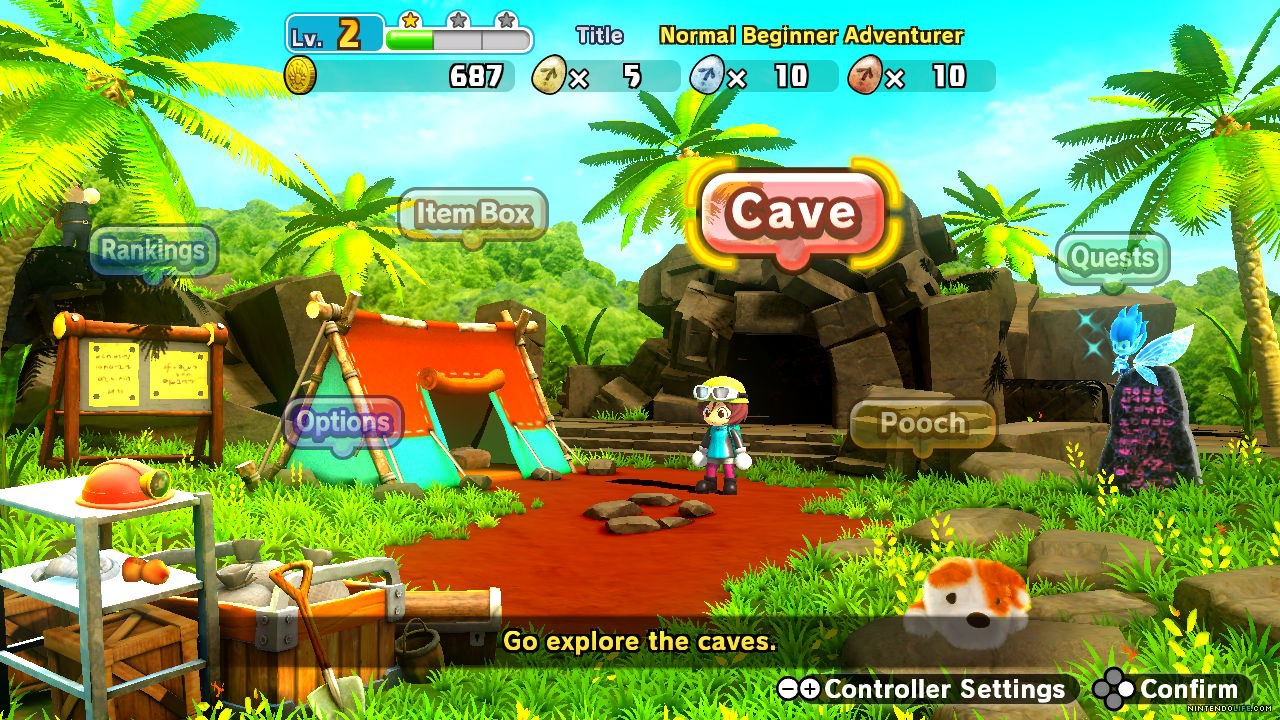 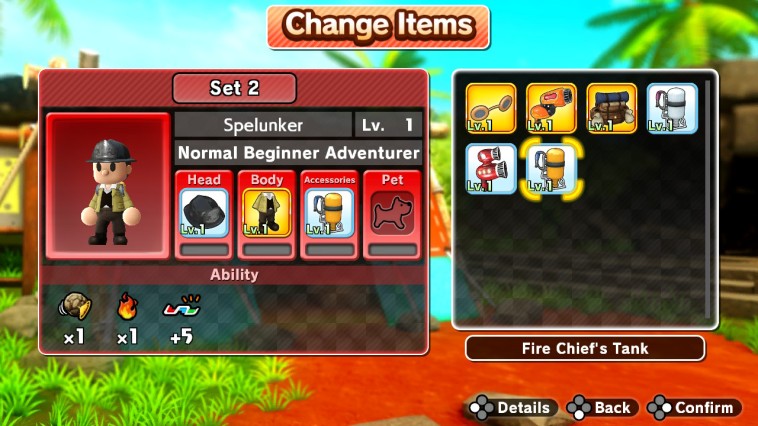 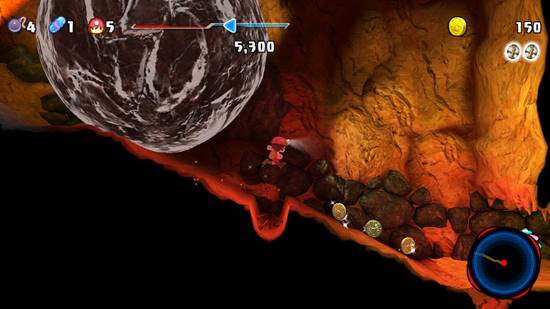 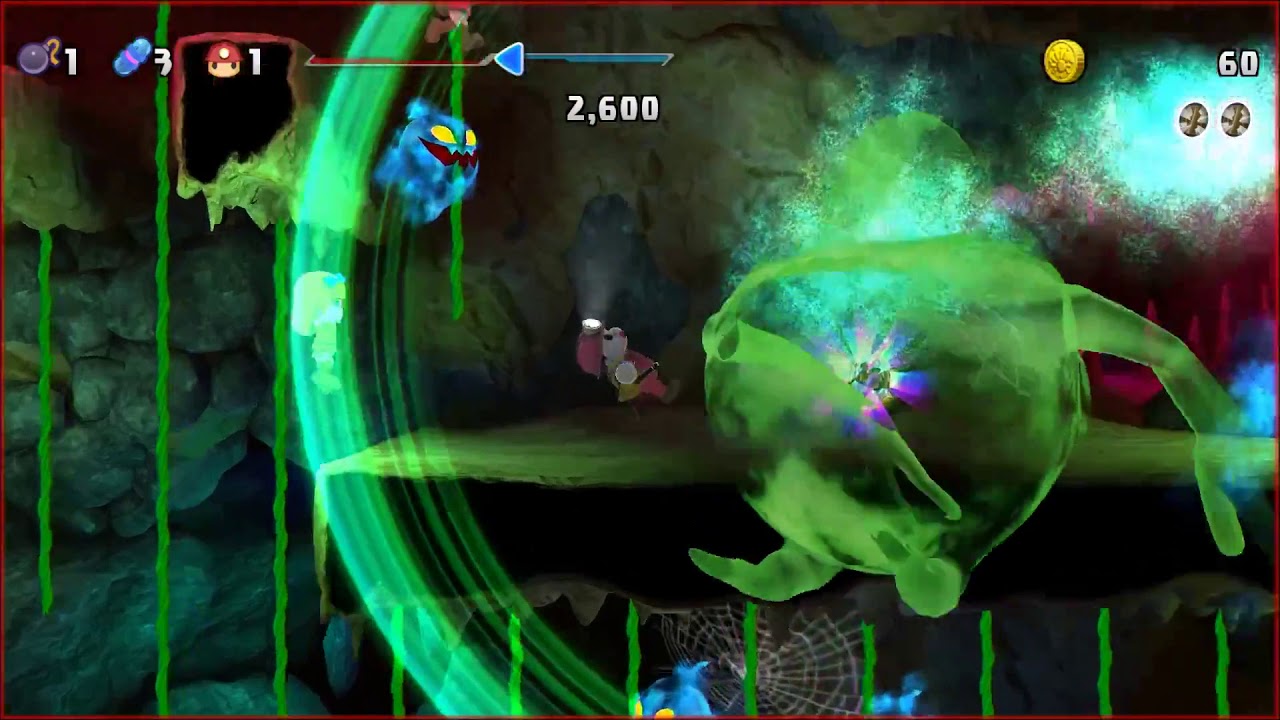 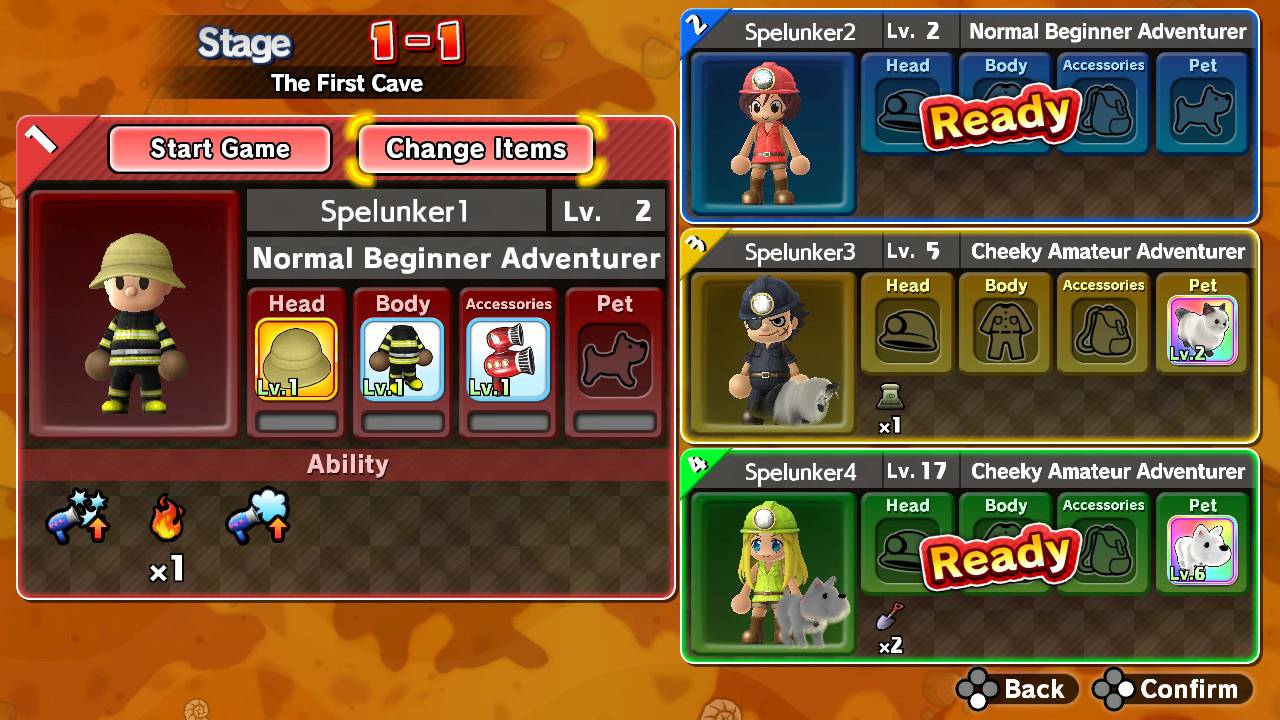 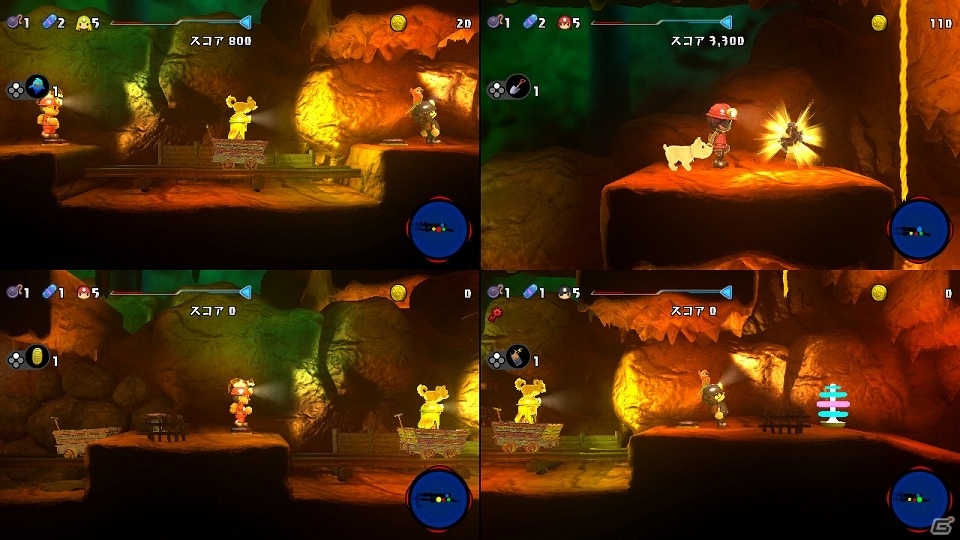 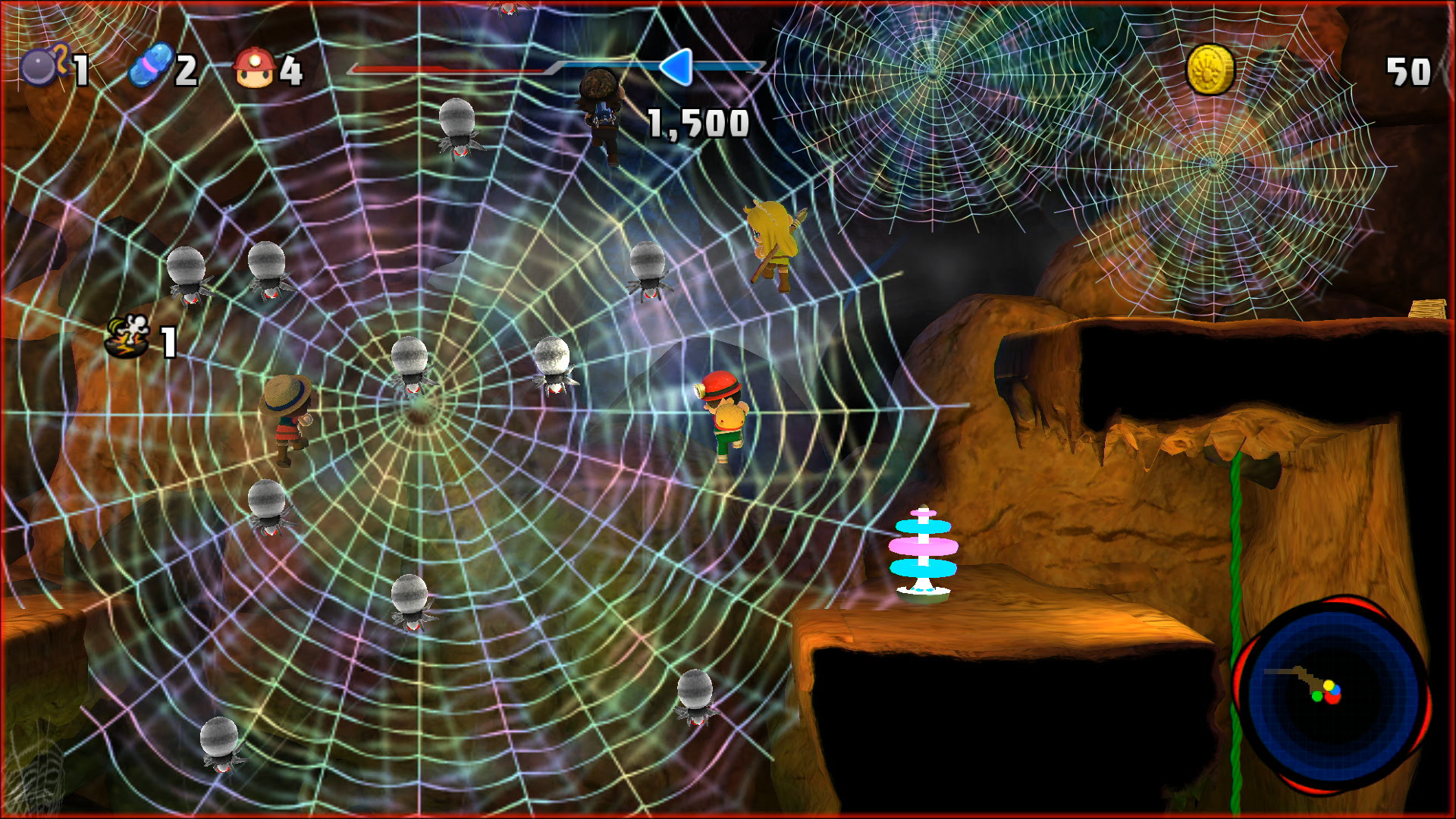 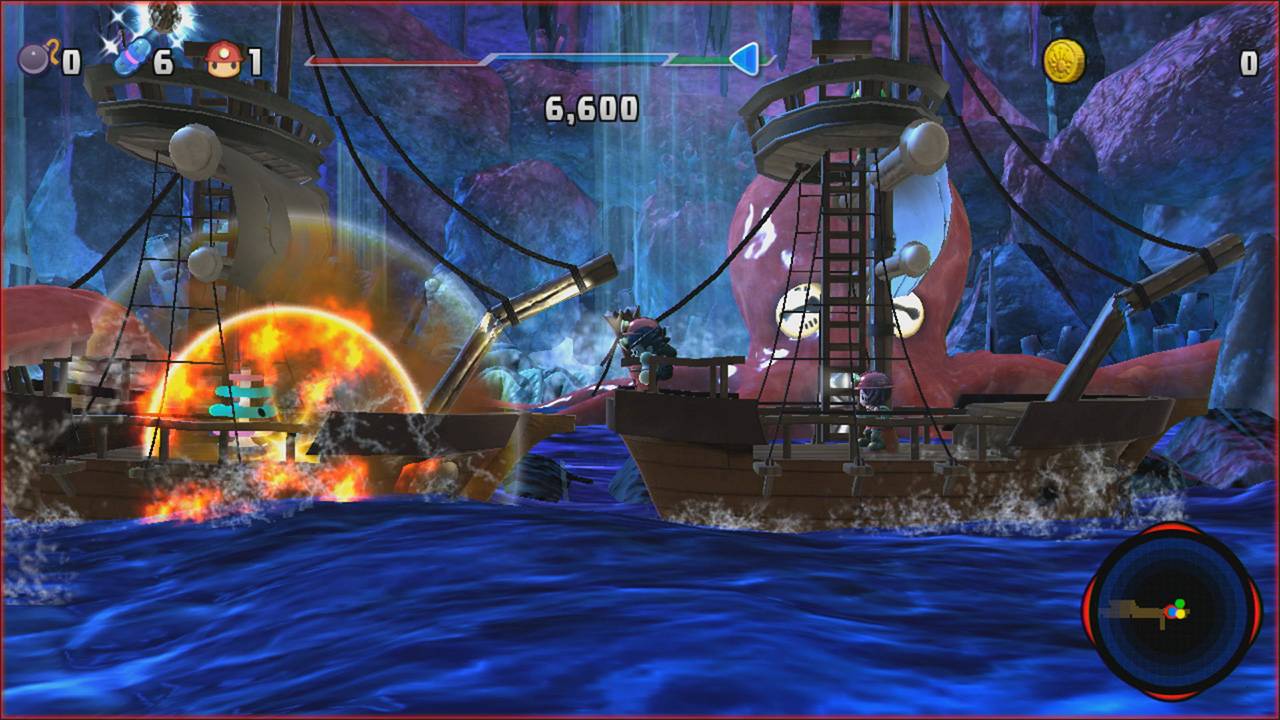 Multiplayer can be local upto 4 players or can also be taken online which is great if you’re after some help to finish the game, as it does become increasingly difficult as it progresses.

Before each trip into the cave you (and your team if playing with others) can choose which items your little Spelunker character will need for the journey or if you’re bad at making decisions or the pressure is all too much you can let the game choose for you. There are some minor quests and puzzles along the way to make things interesting for players but I found it helpful to be in the mindset of completing each cave in order to find more treasures and gold to unlock more items or pets to equip out my little Spelunkette.

In regards to graphics and audio if you’re after a masterpiece with Spelunker Party! then you’re out of luck. It’s most definitely pleasing enough and certainly adorable, but there’s no denying that it has that indie title feeling about it, and I kinda love that about it.

I’ve got to say I’m really enjoying my time with Spelunker Party! Even though at times its frustration reaches controller breaking levels when playing alone I always end up laughing and having such a blast whilst with friends. This really is the perfect introduction into the series for anyone who has never played Spelunker before and a great return to the series for those like me who remember the good old days of Atari.