The year is 2007.  I’ve just moved out of home into a cramped sharehouse and I’m working long hours in a local restaurant as a driver/pizza maker.  On one of my very few breaks I sit outside on a milk crate and begin playing my first ever Mario game on GameBoy Micro – a little title called Mario & Luigi: Superstar Saga.  I never grew up with Nintendo consoles and my first handheld wasn’t until I could afford to pay for my own.  I’ve never been big into side-scrolling platformers either which is why I never played previous Mario games. So why is Superstar Saga special?  It’s a turn-based RPG, and those are right up my alley!

Released for GameBoy Advance in 2003, Mario & Luigi: Superstar Saga begins in the Mushroom Kingdom, but progresses to the Beanbean Kingdom for the majority of the game. In the game, Mario and Luigi combat Cackletta, the primary antagonist. The quest begins when Cackletta, with the aid of her assistant Fawful, steals Princess Peach’s voice after adopting the guise of an ambassador from the Beanbean Kingdom.

“As a role-playing game, it features a battle system that bucks the norm compared to traditional games of the genre.”

Fast-forward ten years and what do I have in my hands?  My beloved 3DS and… Mario & Luigi: Superstar Saga + Bowser’s Minions.  I couldn’t be any happier, but can it live up to my expectations in 2017?  Ten years is a long time and my gaming habits have matured and changed.  This game may have been remastered, but at its core is it still the same RPG that had captured my attention for hours on end a decade ago?

As a role-playing game it features a battle system that bucks the norm compared to traditional games of the genre.  It has more of a focus on timing and elaborate attacks, almost like mini quick-time events.  In classic Mario style, it’s what I can only describe as whimsical in nature, including various jokes and references to older Mario games.

My memory of the original is a little hazy, but the mechanics of the game come back to me like riding a bicycle.  What really throws me off is that it doesn’t seem to look any different to the GBA game, but research online clearly shows otherwise.  The sprites are different and so much more detailed.  The lighting is improved, and everything is, to be frank, utterly beautiful on the 3DS.

I think the fact that I don’t notice a difference is a testament to the remaster doing its best to appeal to the current generation of gamers. Instead of playing on a little handheld the size of my hand, I’m playing on a dual-screen console with much larger screens and higher resolution.  It is an experience that is really hard to explain.  It’s like the game has upgraded itself along with my expectations as a gamer in 2017.

In a flash of irony, I have just purchased a GameBoy Micro to replace the one I had in 2007 that ended up getting stolen out of my car whilst I was in the kitchen working (whoever you are, I still hate you for that).  I still haven’t invested in replacing the game though and honestly, with the 3DS remaster, I don’t think I’m going to need to.  The original may have nostalgia on its side, but I don’t know if it can hold up when comparing it to the 2017 release.

I’ve got to be honest with you; I’m actually not a huge fan of Mario games.  I think I grew up in the wrong time to see the appeal of them.  I never had a Nintendo console as a kid because my parents couldn’t afford one, so the games were never part of my childhood.  For some childish reason, I viewed the whole series as a venture for kids and kids only.  I never realised that the series had grown as I had grown. But this game is living proof of that concept. Not to mention all the praise I’ve heard for Super Mario Galaxy and, more recently, Super Mario Odyssey on the Switch.

Mario & Luigi: Superstar Saga + Bowser’s Minions starts off easy and slowly introduces new mechanics to the game in a drip-fed manner so as to not overwhelm the player.  If anything it’s a little too slow for my liking, but that could be because I am older and more experienced with RPGs or because it’s intentionally easy for younger players.  Basically, you control both brothers at the same time, using different types of jumps in the overworld to make your way around.  One button will make both jump at the same time, one will make them jump on top of the other to perform a higher jump, and the third combination lets you hover between platforms.

Enemies are visible on the map and can be jumped on to initiate battle and gain an advantage.  However, you are not punished for getting ambushed like a lot of other RPGs that implement this system.  Once you’re in battle, you control the brothers with A & B buttons.  A for Mario, B for Luigi.  You start off with a basic attack of jumping on the enemy’s head, and if you time a second button press right, you can gain a damage buff for the attack.  The game continues to expand in combat moves throughout until you have a pretty well fleshed-out experience.

In traditional RPG fashion, it features a level-up system where your stats improve over time.  You get a chance to play a little roulette game where you can gain up to an extra 4 points in a selected stat. This feels overpowered if you can time it right, given that on level-up you generally receive only 1 – 2 points each level.  I boosted my attack stat primarily, turning the brothers into glass cannons that could finish off enemies in one or two turns but ended up quite fragile if I didn’t read the attack telegraphs properly and missed dodging an attack.  Yes, you read that right – this is a turn-based RPG where you can dodge most attacks with a well timed button-press. 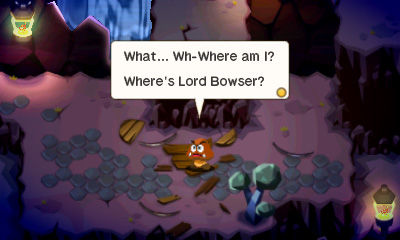 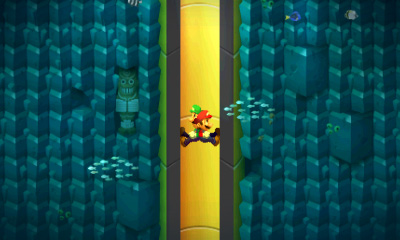 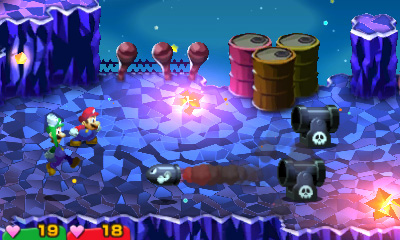 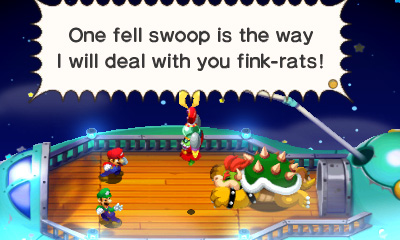 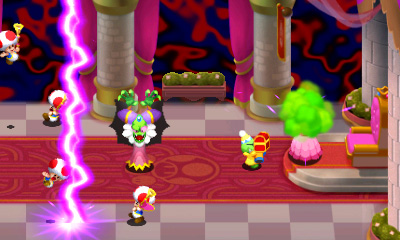 The story follows a Goomba separated from the rest of Bowser’s Koopa crew and his quest to assemble a group of classic Mario enemies such as Goombas, Shy Guys, and Koopas in order to find the missing Koopa King.  This is an exercise in utter tedium, and left me wishing I was playing Superstar Saga proper.

Bowser’s Minions is, at its core, a simple tactics RPG.  Each unit is one of three types – melee, ranged, or flying – with each type weak and strong against another, just like in Fire Emblem (or more simply, rock-paper-scissors).  You are required to put together the right mix of types to face the enemy’s squad and then let the battle play out.  It ends up being a grind of numbers with any failures accompanied by hints that sometimes bottle down to a “level up more” message.

So little action is required that I ended up watching TV with my 3DS next to me, muted, as the battles played out.  The best part about Bowser’s Minions?  It’s completely optional and can be ignored in order to play more Superstar Saga.

Superstar Saga is an excellent Mario game and RPG and really didn’t need the addition of Bowser’s Minions.  It’s a faithful recreation of the original game with polished graphics that is enjoyable and engaging, if a little too easy for my liking.

When not curled up binge-watching TV shows with her cat, Jen spends her time playing ridiculous online games with her friends and playing collect-'em-all with her Steam and PlayStation Vita libraries.