It’s been a long time since we’ve had a tennis game, with the last major one being Top Spin 4 back in 2011. I spent countless hours playing that game with my best mate, as we tried to topple Federer and Nadal in doubles on the hardest difficulty setting. When a tennis game is done well, it captures the feel of the sport, from the squeaking of shoes on the court to the elation of winning a long rally and the devastation of seeing a strong winner sail past from your opponent. AO Tennis claims to be the most in-depth tennis game ever created, but the reality is that this is a clumsy effort that shows promise but fails to succeed in any of the lofty expectations it sets itself.

It all started when the “Day One” Xbox One patch didn’t release until day four of the game being on shelves for sale, and I gave the benefit of the doubt that this patch would fix some of the issues I was experiencing. That’s why I delayed my review… honour and integrity and all that. But even after said patch, it’s clear that this release has been rushed out to capitalize on the real life Australian Open that is taking place as we speak. It’s a smart tie-in for sure, but the game only having a one month window from announcement to release doesn’t bode well, and neither does the fact that it is being held off from release to the rest of the world until later in the year.

What AO Tennis will look like in a few months time is a question I simply don’t have an answer for. What we have now is a tennis game that, at least at its core, has the right idea. Different buttons allocate to flat shots, spin, lobs. The length that you hold down the button ensures that you hit the sweet spot, the outcome ideally being a well placed tennis ball on the opposite end of the court. My issue with this is that you have to start holding down the button to choose your shot while the opponent is still making theirs. This means if you plan the wrong shot type or are positioned poorly, it’s almost impossible to change your mind mid-point.

Volleys are frustrating in this way as characters swing wildly at the net (not how a volley works) or at other times simply stop moving, like their feet are in quicksand, as a completely hittable ball flies right past them without even making so much as an attempt to hit it. Not even a swing and a miss – just frozen in time, unable to react. Gameplay feels unnatural and stilted in a sport that is built on the excitement of a long rally and clever shot selection, traded for robotic movements and strange directions shots end up in. Doubles is even worse, with the secondary player at the net often not moving at all during long points while the player on the baseline does all the work. 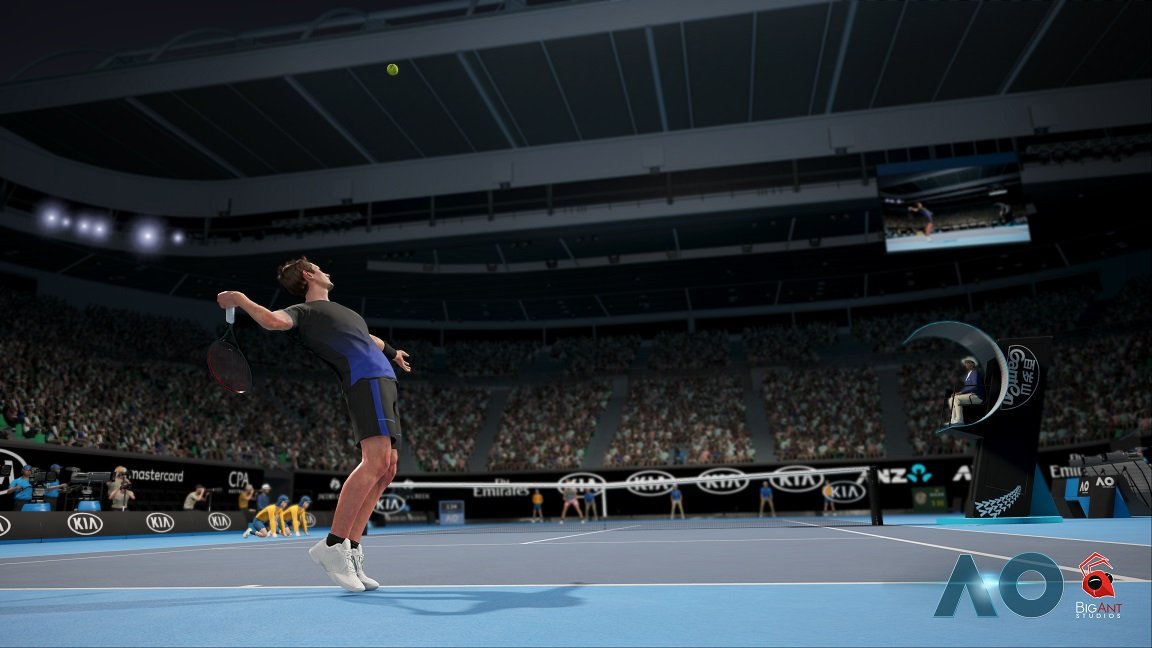 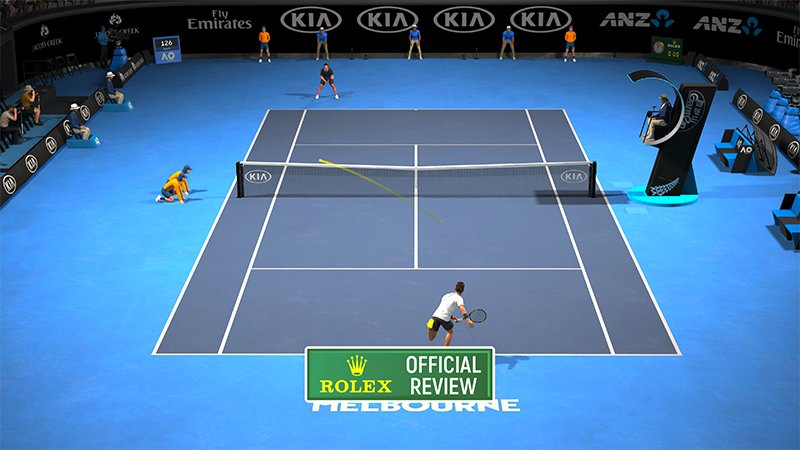 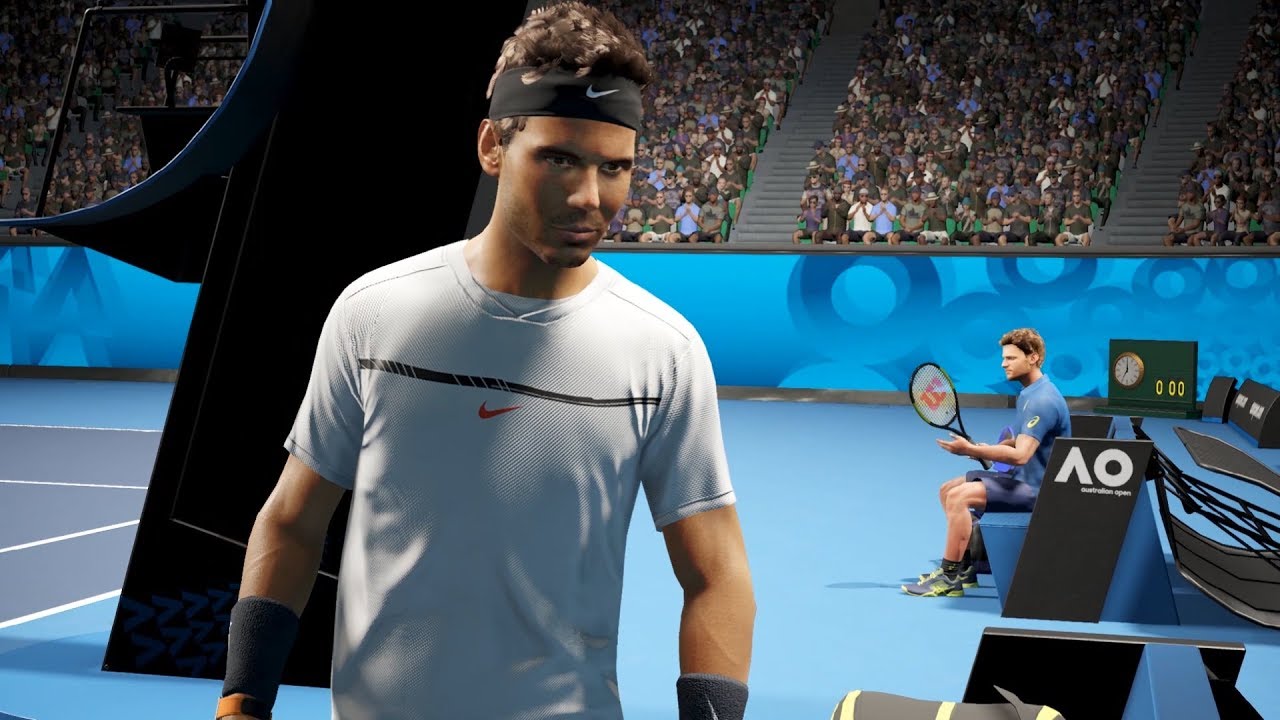 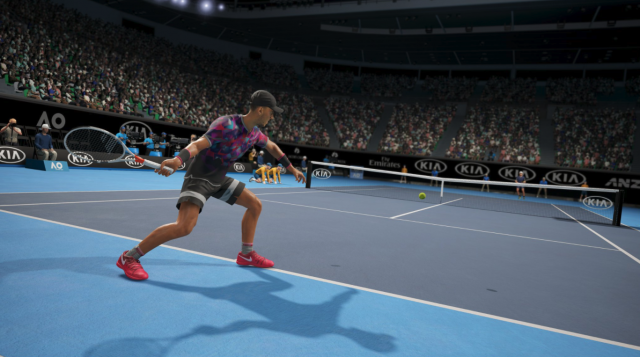 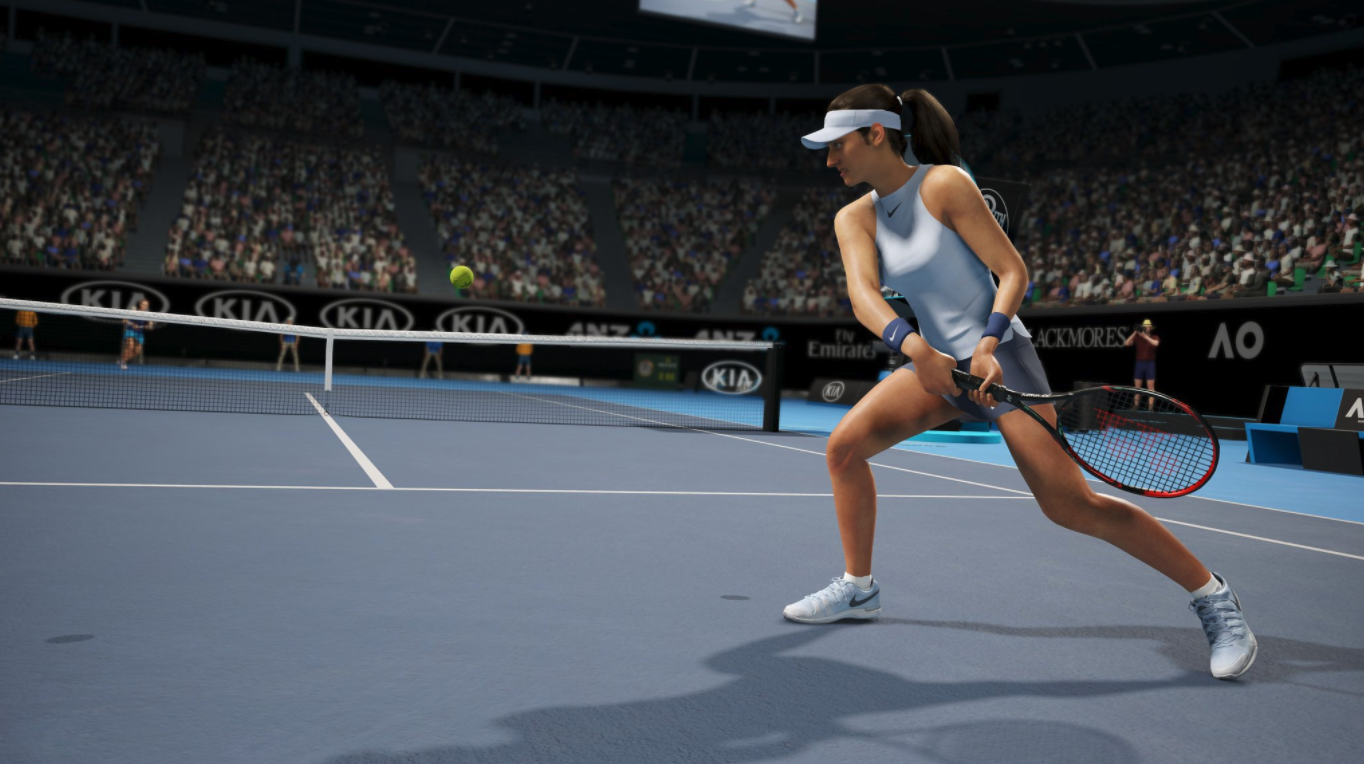 Worse, every now and then a player will miss so wildly that the ball flings full-pace off the court in a comical manner. In one doubles match, I actually watched as four points in a row, the net player swung huge and smashed the ball into the crowd. This just doesn’t happen in real tennis and it shouldn’t happen in AO Tennis. It was funny the first time, but when you’re trying to capture realism and simulate a sport, stuff like this just looks amateur.

There are presentation elements that are clearly missing from the experience too. This is actually heightened and made worse by the fact that all I’ve watched over the last week is the actual Australian Open, but AO tennis lacks commentary, the audio for the crowd sounds unfinished, they don’t get excited about rallies and even the players don’t react properly.

“…and it’s a culture shock to not find the same depth here, in this generation of video games.”

Every single point they win, they act like they’ve just won a huge moment in the match… even if the opponent has just double faulted. The Australian Open mode is a simple tournament, but winning it won’t see your player of choice celebrating or holding a trophy. They’ll put their racquet away and leave the court as if they’ve won a training game against a child. It’s just weird. The addition of hawk-eye sounds cool so that you can challenge line calls, but even these moments lack the tension and pizzazz of the tournaments on TV, with no build-up or crowd involvement.

Also lacking is the amount of licensed players and arenas in AO Tennis. There are 18 real-life players were available at launch, including cover boy Rafael Nadal and some Aussie representation in Ash Barty, Daria Gavrilova, Sam Stosur, Destanee Aiava and Thanasi Kokkinakis also playable. But where is Federer? Where are the Williams sisters? Djokovic? Kyrgios, even? Where are these amazing larger-than-life personalities that we love watching on the court every year?

Even the career mode is lacking finesse and detail. You play matches and tournaments, but there is no other element that reflects a real life tennis career. There are no mini games, no training to enhance your stats, no sponsorship deals, media interviews, finding new coaches… these are things that have been in tennis games for over a decade to add layers to the single player experience and it’s a culture shock to not find the same depth here, in this generation of video games.

Big Ant Studio’s promises that they will be updating AO Tennis in the months to come – and they’ll need to if they want to make any sort of impact in the international market. Fans have been so hungry for a tennis game in this console generation that they will pick this up just to take part in a loved genre, but there are so many issues with the game in its current state that it makes it difficult to recommend. Later in the year, this could be a solid experience, but in the meantime you’re better off watching the Australian Open on television instead.