Making things is hard, making things on your own is even harder—or at least that is what math has taught me. While I am not a game developer I would like to take a stab in the dark here and say that a game is one of the hardest things to make. So the mere fact that Iconoclasts has been an eight year long passion project of one developer, Joakim “Konjak” Sandberg, is both mathematically mind boggling but also a real curb stomp to my ego.

Starting life under the title ‘Ivory Springs’, the project was scrapped in the early days before being brought back under the title Iconoclasts. Carefully built pixel by pixel, Iconoclasts is a love letter to the iconic 2D side scrollers of my own childhood.

I’m sure we’ve all played a great classic pixel platformer. Some simple level design and maybe a quick hint taught us how to use that new power up we just learnt. Then before we started to feel like our hands were being held the game throws us back into the fast paced world to experiment and learn through trial and error how to overcome the increasingly overwhelming odds.

However the most important thing about a 2D platformer is a great character. They’ve got to pop on the screen, and balance the line of having enough character to root for but not so much that it distracts from the game. In Iconoclasts that part is being played by Robin, a plucky young woman going against societal norms and just trying to help people.

Set in a world where the sinister religious authority by the name of One Concern, ruled by a being known as “Mother”, has taken over the government. One Concern allows only licensed mechanics to handle the power source called “ivory” that powers almost all parts of their society. After Robin is discovered as a self taught mechanic who has been helping the lower class towns, One Concern comes for her. On the run, armed with her oversized wrench and stun gun, Robin join forces with a rebel pirate Mina and the fight against One Concern and their ominous and mystic Agents begins.

Going in to Iconoclasts I expected some basic world building and then a fairly thin plot with a focus on solid gameplay and puzzle solving. Let’s get this out of the way quickly though because you won’t here it often, I was wrong. At some point it creeps up on you and you begin to realise the story being woven is about corrupt leadership committing democide, genetic manipulation, resources depletion, PTSD – and this is all before you learn that the deity that the revered “Mother” communes with might be an eldritch horror, maybe?

The big thing about this world is that it is clearly built upon the husk of a previous society that has failed. The new civilisation treats machinery from the lost world with religious fervour and the mixed messages of the old and new leaves you almost constantly questioning what happened before, and where the story is going. More than once I was left baffled but intrigued and the further into the story you dive the more you need to know how this will all finish. 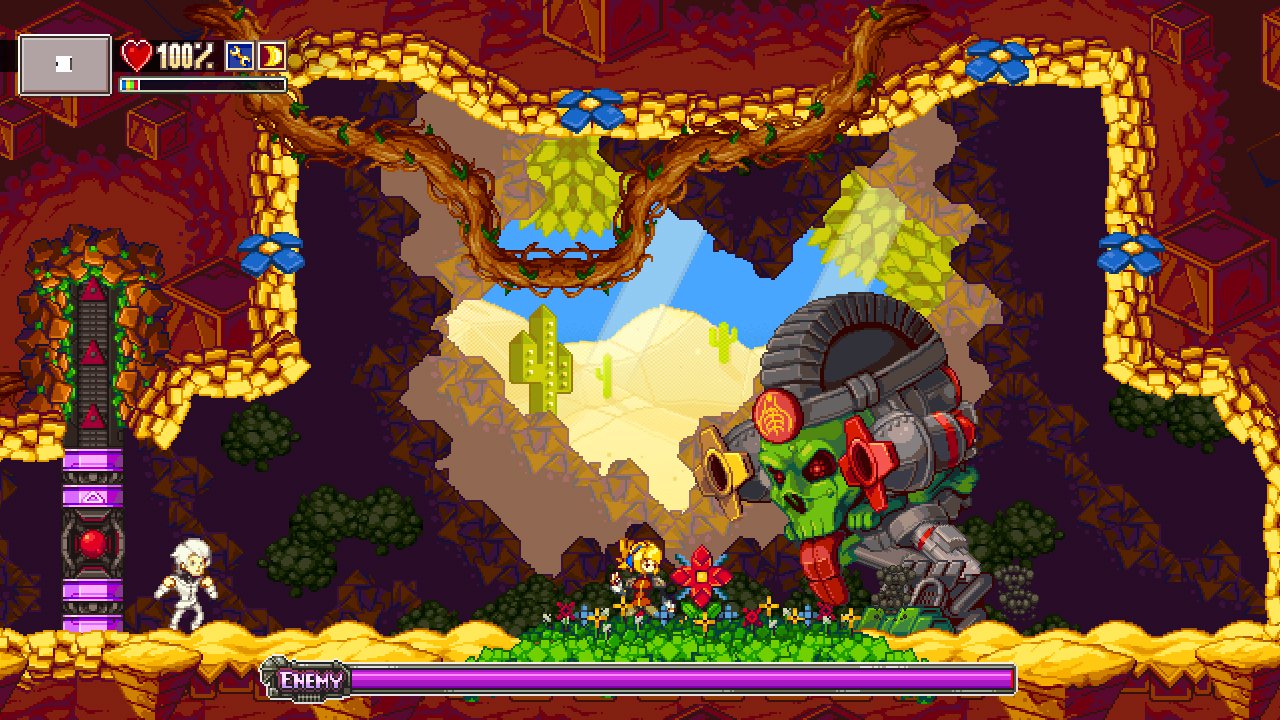 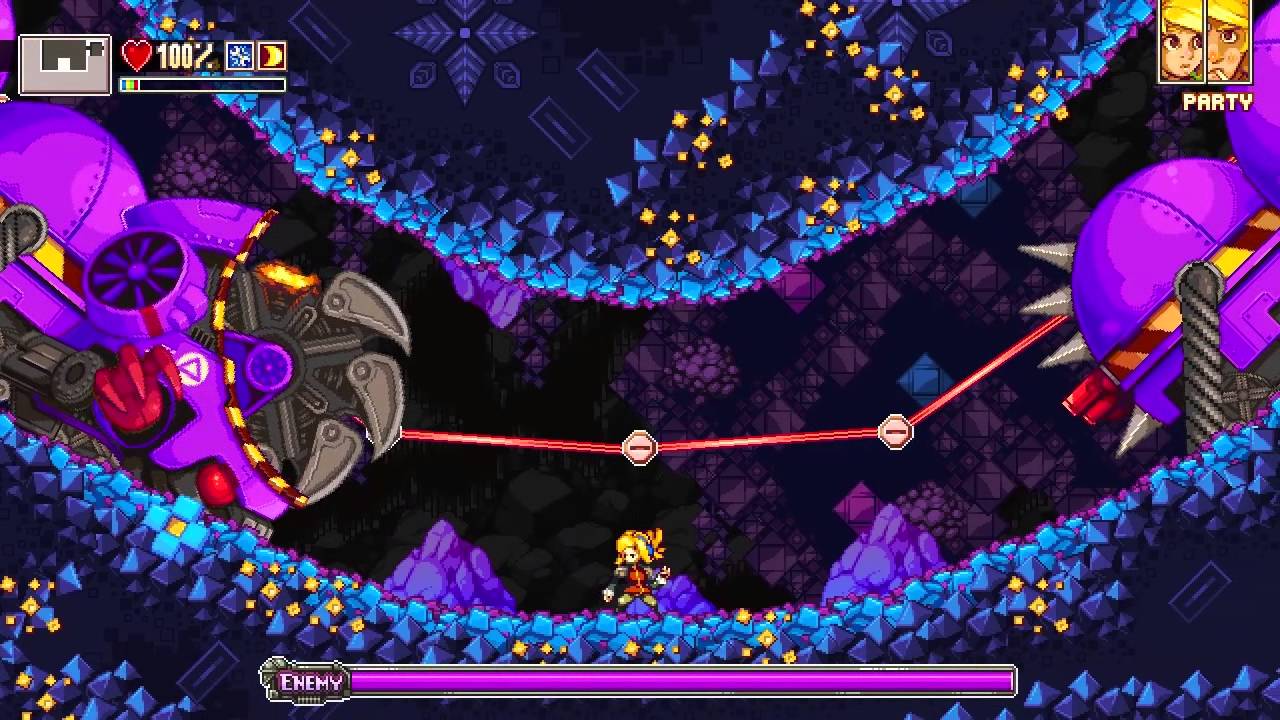 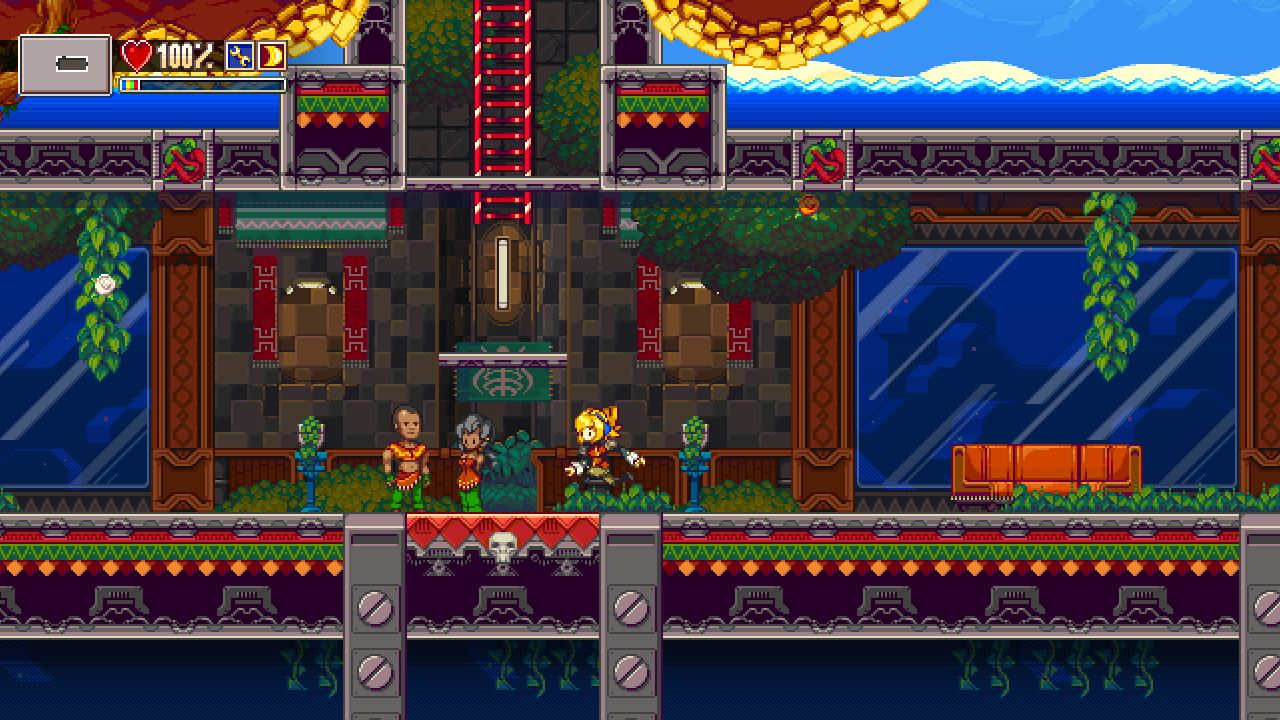 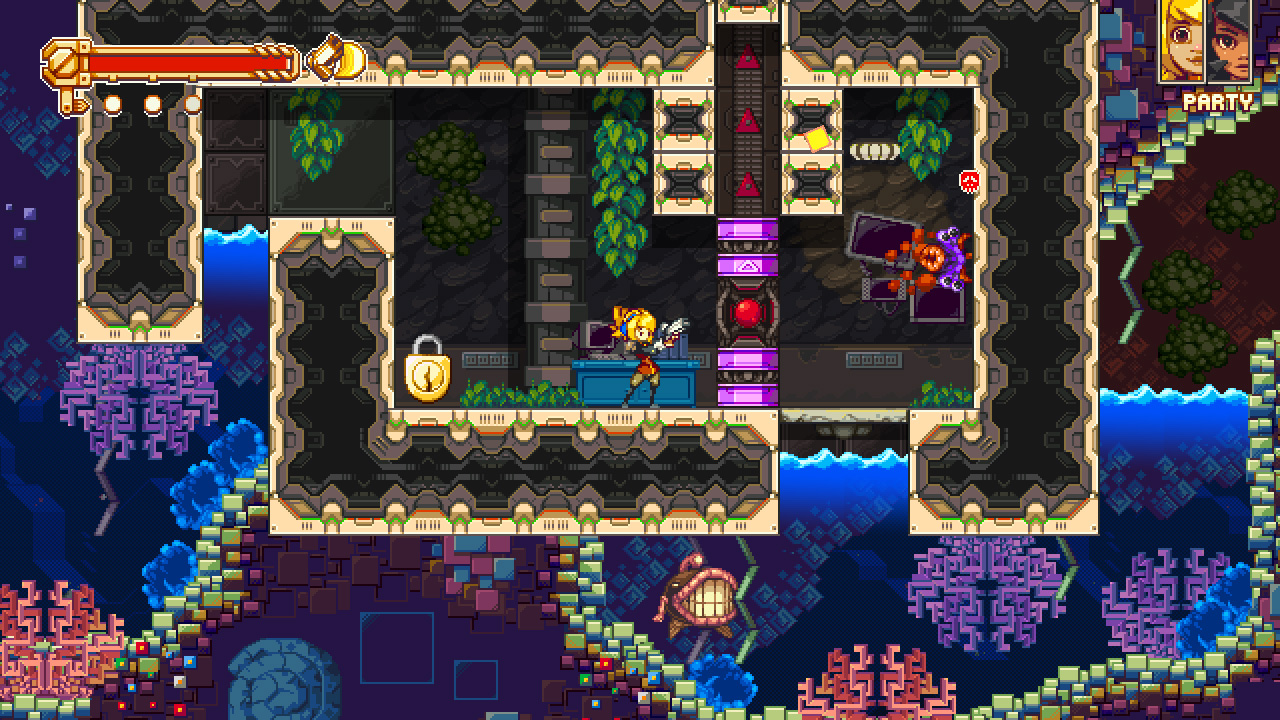 A great story is all well and good but without great gameplay the entire venture falls apart—thankfully Iconoclasts brings that to the table as well. The basic 2D platforming is as solid as you’d expect. You’ll be jumping and crawling around a world that can seem a little compact. You’ll start the game with your basic stun gun for ranged attacks and a massive wrench for getting up close and personal but also reflecting some enemy attacks.

You’ll slowly unlock new weapons that will begin to expand the nooks and crannies of the world as you head backwards and forwards. Thankfully the rate with which these are given to you is a little slower. Some games get too excited and before you’ve even made it halfway through you have 90% of the tools you’ll need. Instead Iconoclasts lets you fully experience the last weapon before you move on to the newer one.

Throw into this mix the fact that you will be able to unlock and craft “Tweaks”. These are small little mods that make minor changes to your abilities such as speed, wrench spinning and how long you can hold your breath. You make these by unlocking materials in hidden chests around the world. You can equip three different Tweaks and when you take damage they will shatter. Thankfully they aren’t gone for ever as they will come back as you kill enemies.

“How each companion will take part in the boss battles will also be different each time.”

Along your journey you’ll also begin to expand your party of misfits. Including the previously mentioned pirate, Mina, each new character will periodically enter and exit your team. Besides adding their voice to the sometimes lengthy and text heavy cutscenes, the companions find their time to shine in the great and varied boss battles.

How each companion takes part in boss battles will also be different each time. One battle sees you playing tag with Mina to operate different parts of a machine and using their specific weapons, while another forces you to position your enemy in the area of attack of your white haired zealot companion, Royal.

The game definitely takes everything about those older titles like Castlevania and Metroid and then injects a lot of things that we’ve learnt about gaming in the last few decades, especially about how to deftly weave a narrative. The most surprising thing you’ll find here is the length with the game coming in at around 14 hours of campaign.

I would say only twice did I find myself stuck, running back and forth, and boss battles usually take a maximum of two restarts to grasp the mechanics and start leaping around the screen like you own the place. This game oozes fun and you’ll not even notice the time burning away. Although at times that can grind to a halt to work through the text heavy dialogue of the plot. Thankfully the story is interesting enough to pull you along but boss checkpoints are usually before the cutscene introducing them. You need to know that pushing Start will let you skip these sections of dialogue—I learnt that way too late into the game.

Having lived through the golden era of side scrolling, I like to think I know what makes a good “metroidvania”, and in my opinion Iconoclasts captures the essence of these games. Its hands off approach to teaching you the ropes makes you feel like a 2D badass who is just too smart for the puzzles being thrown at you. It then swoops the plot for a gut punch that makes you feel like you’re watching a David Lynch movie on zero sleep. And lest we forget, made by one person—it is mind boggling.