The Red Strings Club: Weaving fate one drink at a time

Take some philosophy about human emotions and freewill, mix in some literal magic, some detective work, a mysterious bar and a little bit of pottery into one game. What you’re left with is a cocktail called The Red Strings Club.

From the team that brought you Gods Will Be Watching, The Red Strings Club is a new pixel point-and-click with an incredible amount of heart. If cyberpunk detective work is your kind of thing, this is not a game you will want to miss.

The Red Strings Club tells the tale of a small mysterious bar.  The bartender will mix you drinks that literally speak to your soul. His boyfriend (oh yes, there’s queer representation), an expert freelance hacker, is trying to stop a corporate threat called Social Psyche Welfare. This threat will remove anger and fear from society, without asking permission before installation.

There’s also a robot that’s designed to be the ultimate empathy machine, programmed to do what’s best for humanity. And you, as a player, will assume the role of all three characters. Try to take down a mega corp. Try to do the right thing. Try to get the best information.

Sounds stressful? It is. The Red Strings Club somehow manages to mix stress with little moments of calm relaxation.

There’s a lot packed into this game. It is dense. I ended up pulling out a notebook to start writing things down just to make sure I didn’t miss any little points and drawing my own links for subsequent play-throughs.

“It’s rich with philosophy, emotions and honesty, which lends to your interactions feeling very genuine.”

The narrative is, hands down, the best part of the game. It’s rich with philosophy, emotions and honesty, which lends to your interactions feeling very genuine.

The characters each have a distinct personality to them, and the world feels tense and dangerous, with little pockets of love hidden within.

There are mysteries, character backstories and hidden conversations all throughout the game. Even after a few play-throughs, I doubt I found them all.

What The Red Strings Club achieves with its narrative is a real sense of immersion in it’s world. It also has a great grasp on pacing which means that for a short game, it feels like there’s a lot in there.

There are 3 acts in total, with each act focusing on a different character completing a goal. For each character there’s a completely different way of interaction with the world. You’ll change people through pottery, bartending, quizzes and phone investigation. 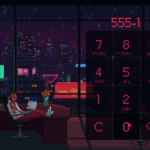 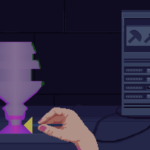 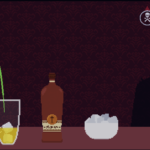 The mechanics seem simple in themselves, but it’s what you do with them that matters.

The different methods of interactions are structured in such a way that there’s no clear correct path through the game.  Are you going to give people what they need, or what they want? Do you know what they want? Are you qualified to make that call?

Never did I feel like I was making the right or wrong choice with an interaction.  The game values player intuition and problem solving over giving you hints of the way forward. It felt like it constantly nailed what David Cage has been trying to achieve for years – that moment.

That moment in a game where you have two or three options, and all of them tug your heart in a different direction. I had to spend a large amount of time debating for a lot of choices.

Rather than just doing what I figured the writers did (or didn’t) want me to do, I felt like the game really took into consideration proper balancing techniques with every choice. It never held my hand on what I should be doing, and trusted that I’d find my way around myself, either through trial and error or careful consideration.

It is a very short game, so it is worth your time replaying. My first play-through took about 3 hours but I completed four play-throughs total. Replays meant that I was able to try new ways of talking to people, different consequences and more space to trial detective work.

The music was great as well, so I never found myself getting sick of any of it through the replays. The music held up on replays, the dialog, the mechanics – everything was just as good the second, third and fourth time around.

Once the initial mechanic learning curve was gone, these play-throughs got shorter and shorter. Replays don’t hold you back either. If you’ve memorised bits of information from previous runs you can use them in your next go. This is honestly a relief, although a callout of this feature might be nice for a game that wanders into the meta occasionally.

The only thing that stood out to me in a negative light was a serious overstep in regards to a transgender character.

It will have you digging through their personal files and medical records. You’re also calling people they’d had intercourse with to talk about them or even pretend to be them.

At best, this felt invasive and uncomfortable. At worst, it was gross, confronting, insensitive, and more than a little offensive.

“At best, this felt invasive and uncomfortable. At worst, it was gross, confronting, insensitive, and more than a little offensive.”

The problem is the game doesn’t follow through with any of these ‘Maybes’. The game puts noting else into this aspect of the character and it feels empty and hollow to throw this representation in, only to make you deadname the character (something that is a really awful thing  to do to a trans person).

As a trans person myself I just felt disappointed and disgusted that I had to do that. It’s not avoidable either – It’s a mandatory puzzle to proceed. Which was  baffling in itself, since up until then I felt like I could solve puzzles my own way, or find a way around them.

Thankfully characters never refer to the character by her deadname, but the damage was already done for me by then. But having that as a narrative puzzle was not only insensitive but confusing in an otherwise progressive and thoughtful game.

There is also the the ‘sad queer’ trope present. That, however, I believe is unavoidable in a game about trying to overthrow a corporate government with major characters being queer. It provides at least a bit of context with the game asking you questions about homophobia and hate a few times.

Having queer people being fundamentally oppressed by a large faceless government is a reflection on reality currently, but it was difficult to face.

If you’re looking for delightful queer romance, this is not the game for you. Sure, there are nice moments of love and intimacy, but ultimately prepare yourself for some hard realities.

The Red Strings Club was beautifully crafted. It was self contained with 3 acts coming in at about an hour or so each. It remained mysterious even through replays and had solid writing. The game also never held your hand or steered you a particular direction. Instead it let you feel things out your own way, and that’s the kind of thing I really like in a game – especially one about freewill.

I would definitely recommend stopping in for a drink.