Shadow of the Colossus Review – A monumental remake

In 2006 I had a fairly good idea what I thought a video game should be. I’m sure we all did when we were teenagers. At the time I was living away from home and studying in another city, on weekends I would visit my mum and we would play video games, either together or she we would watch me play. My game library included Tekken, SSX, Metal Gear Solid and Dynasty Warriors. Games had always been about exhilaration for me and were fairly shallow experiences. One weekend at Blockbuster my mum picked up a copy of a game she thought I’d like, Shadow of the Colossus. In one sitting we played through the entire game together and for the first time in my life a game resonated with me, I saw games for so much more than I ever had previously.

It has been 12 years since that experience and I have replayed Shadow of the Colossus more times than I can count. The game resonated with me so much that it literally became my favourite game I’ve ever played—still to this day. So while watching the 2017 E3 press conferences with the Checkpoint team I got choked up with emotion at the announcement of a complete remake coming to the PS4.

If you haven’t played Shadow of the Colossus before, it’s completely understandable. When first released the game didn’t have a long shelf life due to an extremely unbalanced supply to the overwhelming demand. By the time Sony realised how popular the title was they were full steam ahead into the PS3 and it was too late to redistribute. A PS3 upscale was released and while fun and a great entry point for those that initially missed it, it felt a little underwhelming. Thankfully though that is where this remake sets itself apart.

The premise of Shadow of the Colossus is actually very simple. You are Wander and you have entered into the Forbidden Land on the back of the best horse in gaming, Agro. Wander has brought with him only a bow, a blessed sword, and the body of his beloved Mono. In the Forbidden Land Wander hopes to find aid from the entity Dormin who has been locked away and whose legend speaks of their ability to return the souls of the dead. Dormin welcomes you into the land and offers their aid, however before they can Wander must use the blessed sword he carries with him to strike down 16 colossi in Dormin’s domain.

So your mission is clear. You have 16 enemies ahead of you, that’s it. The colossi do not command forces you will fight your way through and the wildlife or the Forbidden Land are no threat so surely this will be easy. You take your sword, which when held skyward in sunlight will direct you towards your first enemy, and rush off to face them. After some quick platforming you come to a clearing where you’ll make your stand and then the beast shows itself. The ground shakes as the camera pans out to show the first colossi, you are about as big as his finger and the challenge suddenly becomes a bit more daunting.

The reality is that Shadow of the Colossus is essentially 16 boss battles, each separated by some light exploration. A good boss battle however is more than just a fight, it’s a puzzle. So when your enemy is the size of a building that puzzle turns into a platforming puzzle. The 16 colossi all represent a different type of puzzle for you to solve. Each one will feature one, sometimes more, weak points that you must reach and plunge your blade into.

This is achieved through a variety of methods that include climbing exposed fur, using weaknesses to stun your gigantic foe or lower their defences, using the environment, or leaping from the back of Agro as you race alongside them. Each colossi is going to present you with a different approach and each colossi will be trickier than the last. With perseverance you will expose their weaknesses, you will climb along them as they desperately try to fling you off and then you will get your killing blow, which you immediately regret.

Here lies one of the game’s biggest strengths, no matter how often I play this game I still feel awful killing these stunning giants. Black blood sprays from their wounds, the camera zooms out to show their gargantuan collapse to the earth as the life drains from them and they let out a cry of deep desperation in their last moments. The camera returns to Wander and you’re left looking at the motionless body of what was a magnificent creature, the music becomes sombre as you are given a few moments to move freely before you are knocked unconscious by the energy rushing from the body of the colossi.

Waking up back in Dormin’s temple there is no fanfare, you are not praised for the murder you just committed. Instead Dormin simply gives you the next creature on his hit list, not even giving them the agency of a name. Here lies the heart of this game, these amazing creatures and the hero cutting them down. The stunning art, the emotive soundtrack and the simplicity of the game all play into creating real raw emotion about your actions and slowly paints a very murky picture of who Wander is and what lengths he will go to for the deceased Mono.

“…there is no fanfare, you are not praised for the murder you just committed.”

The simplicity travels through to the gameplay. With a wonderfully scaled down HUD this could be one of the earliest examples of stamina management. Stamina is used for climbing, holding on, and using your bow or sword. It will only refill when you are standing without gripping to anything. Finding special white tailed geckos wandering around the world and detaching their tails and consuming them will increase your stamina while fruit will do the same for your health after being shot out of trees.

To traverse the world you’ll be running, climbing, rolling, jumping and most importantly using Agro. With a simple button push you’ll call for the trusty steed to be by your side and can leap onto her back, although once or twice she might find herself wedged into a tree. Whether on foot or horseback you’ll have your two weapons, sword and bow. Each with a simple attack, nothing fancy, because you don’t need fancy to get the job done.

Outside of the main campaign Shadow of the Colossus does also come with added challenges for those invested. A Time Trial option in both Normal and Hard Mode looks to see how quickly you can bring down the colossi and as you successfully take down more you’ll unlock some special items to make your life just that little bit easier. This does add to the game’s length but most players will be done with the main campaign within around 7-9 hours. While short in comparison to a lot of modern games its succinct story means that you never feel bogged down or drawn out for the sake of artificially extending the game’s lifespan. Call me old fashioned but I’d rather a few hours of a well crafted experience than several hours of fetch quests. 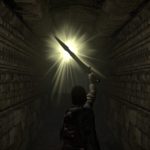 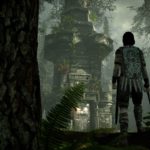 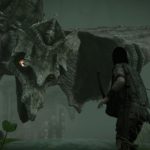 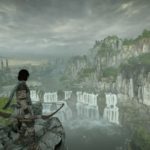 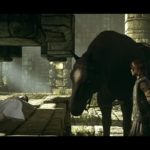 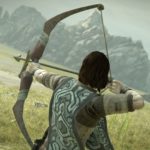 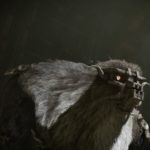 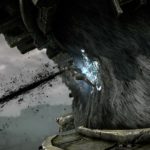 Bluepoint Games were the development team behind this remake and they have brought their very best work to this edition. A game that once had ambition beyond the capabilities of the hardware it ran on can now finally spread its wings with graphical advancements. The once always present fog no longer exists and environments that were a little bland are lush with jaw dropping detail.

Thankfully the team also took it upon themselves to bring us a photo mode and for the first time in a game I actually used it. The artistry of this game from character and colossi design to environments deserves to be captured, every image in this review is from the photo mode and this is a tenth of the photos I took. The atmosphere of this world is one of wonder but also loneliness. Bluepoint Games have raised the bar on what a remake should be in this modern gaming era. One that elevates without sacrificing the original experience in any way.

Shadow of the Colossus

The original Shadow of the Colossus is a game that has defined me as a gamer. For 12 years now I’ve never hesitated to tell people that Shadow of the Colossus is my favourite game of all time. Not only did it begin the dialogue of games as art within me but was also a moment I will always share with my mum, bleary eyed as the final cutscene played out to our utter disbelief. Does this then make me biased in this review? Possibly, but aren’t fans the hardest people to impress?

I have never had to defend my love for this title to anyone. When I mention it to people who have played it they light up with enthusiasm. This remake takes the vision the team originally had with its 2005 release and breathes new and reinvigorating life into it. It is a love letter to all those enthusiastic players and a game that was ahead of its time.