Originally released as a Wii U exclusive, it’s reasonable that you may have missed Bayonetta 2 the first time around. The sequel to one of the most critically acclaimed and stylish action games of all time quietly stunned audiences on Nintendo’s less-than-successful console, taking the over-the-top battles from the first game and kicking it into overdrive with jaw-dropping set pieces, memorable enemies and a heroine that is as exciting and inspiring as she is overtly sexual and cheeky. She’s one of my most loved characters in video games from attitude to her brutal execution of enemies, and I’m stoked to relive this polished affair on the Nintendo Switch.

“…dropping you into a thrilling prologue and always throwing you deep into the action without apology.”

The story of Bayonetta 2… well, it’s nuts. The good kind of nuts. The kind of nuts where Bayonetta herself would definitely make a comment about while she flips through the sky, moaning as her outfit is slashed off of her and her hair covers her exterior. Where the first game introduced us to a world of angels and demons with one kick-ass woman planted squarely in the middle, this sequel takes things to another level, dropping you into a thrilling prologue and always throwing you deep into the action without apology.

With their history in the Devil May Cry franchise and the first Bayonetta, PlatinumGames have more than enough experience to truly make this sequel pop, with fast-paced action seamlessly blending memorable cut-scenes with ridiculous chained combos, expertly designed enemies with a variety of attacks and chapters that have you battling while riding a jet, falling fast through a gigantic tower or changing into a huge underwater snake/dragon or sprinting through scenes as a panther. It’s the kind of experience that had me smiling at regular intervals, guffawing at how silly it was and smirking during most of the dialogue. The fact that you can experience portions of this sweet game in co-op makes it even sweeter. 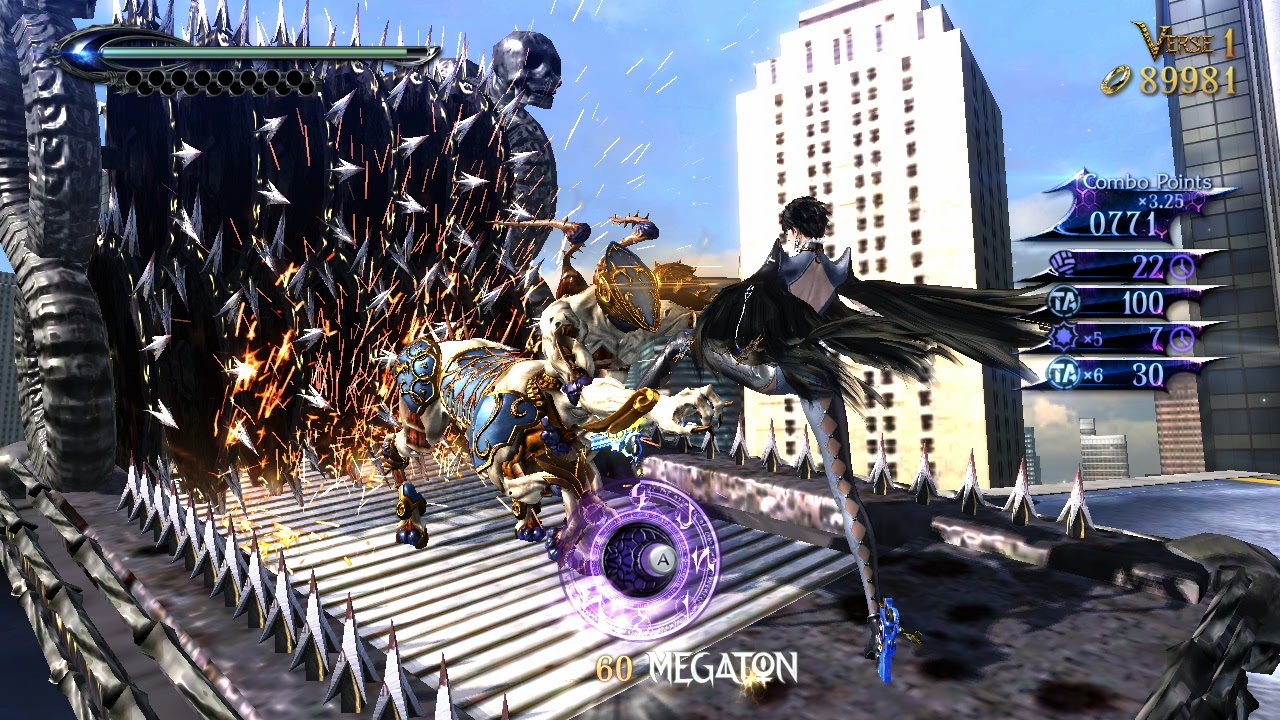 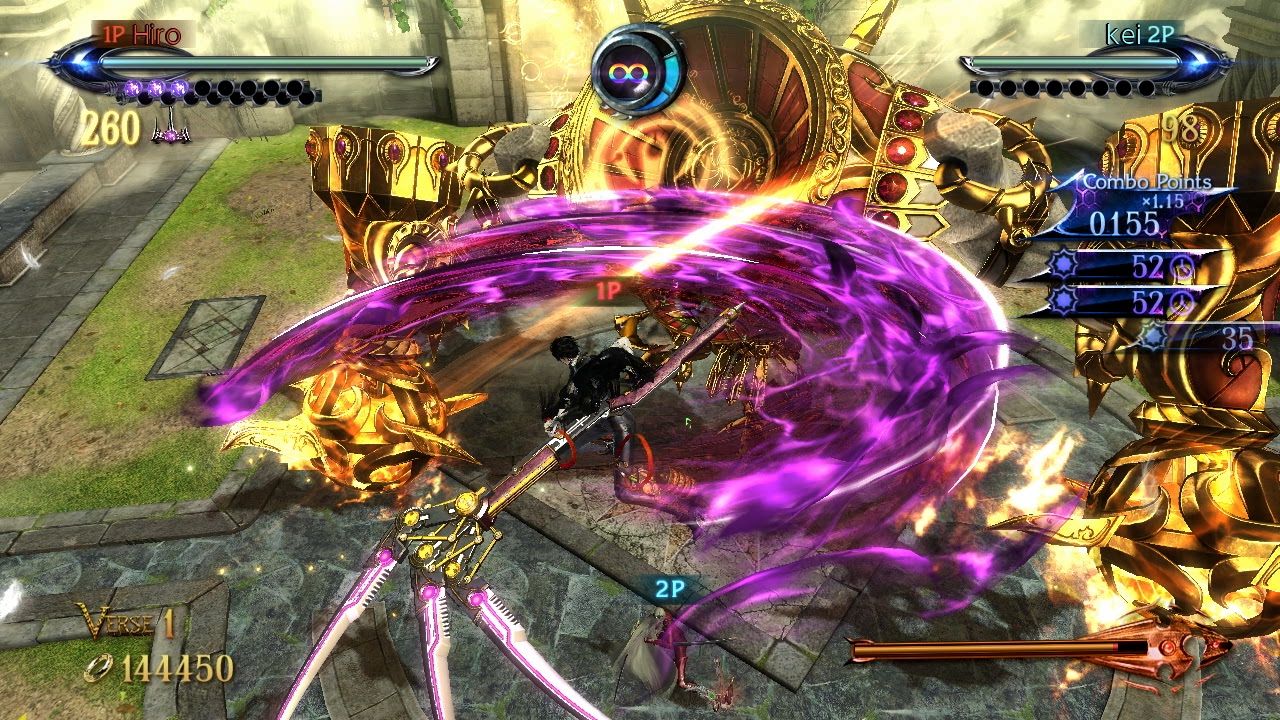 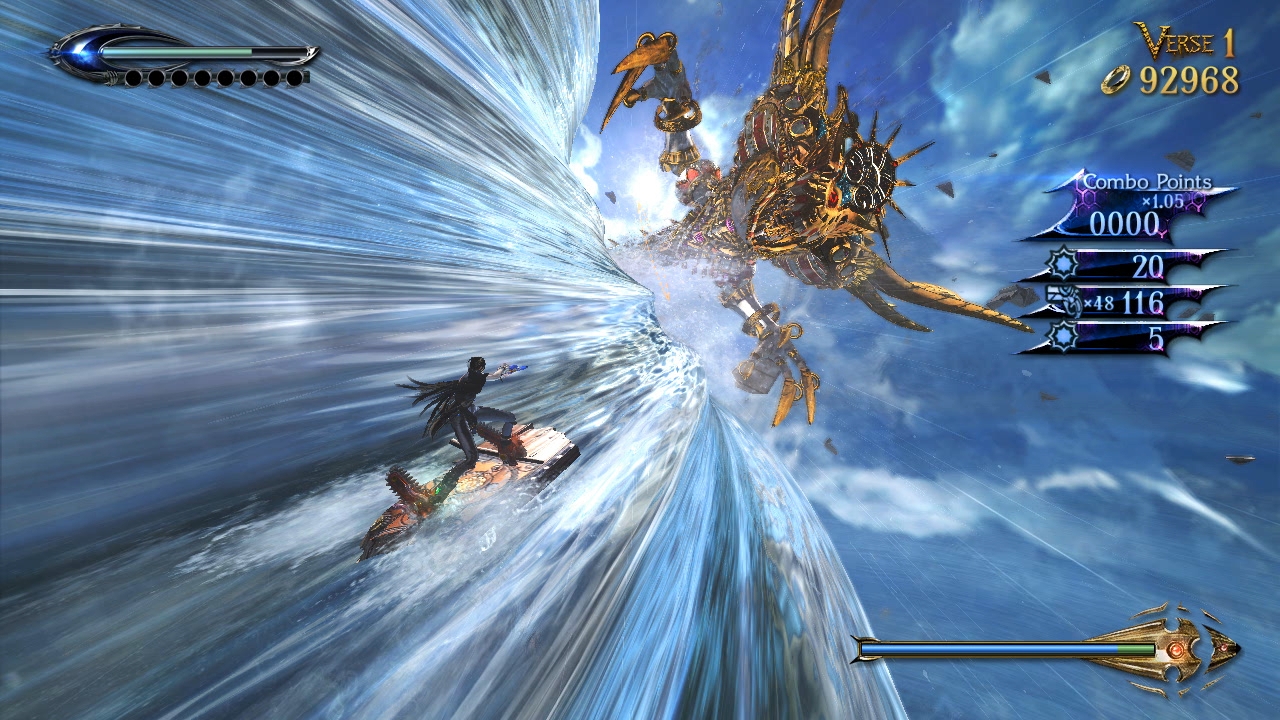 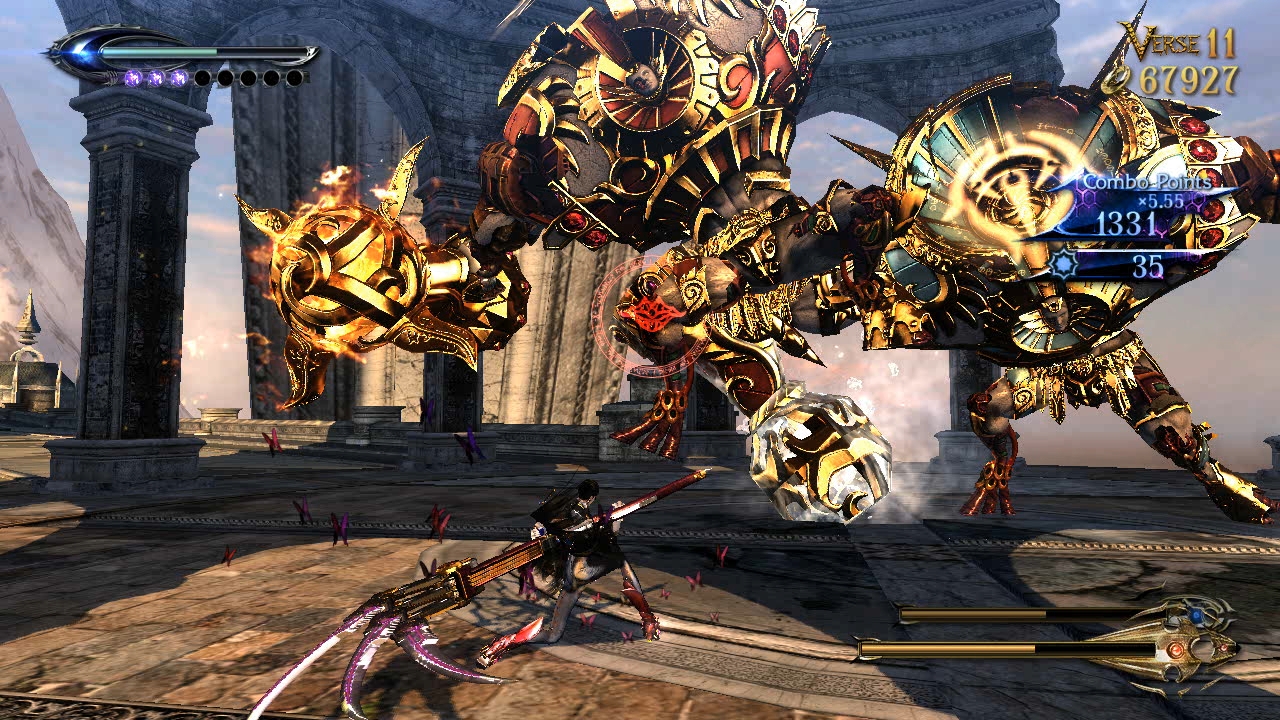 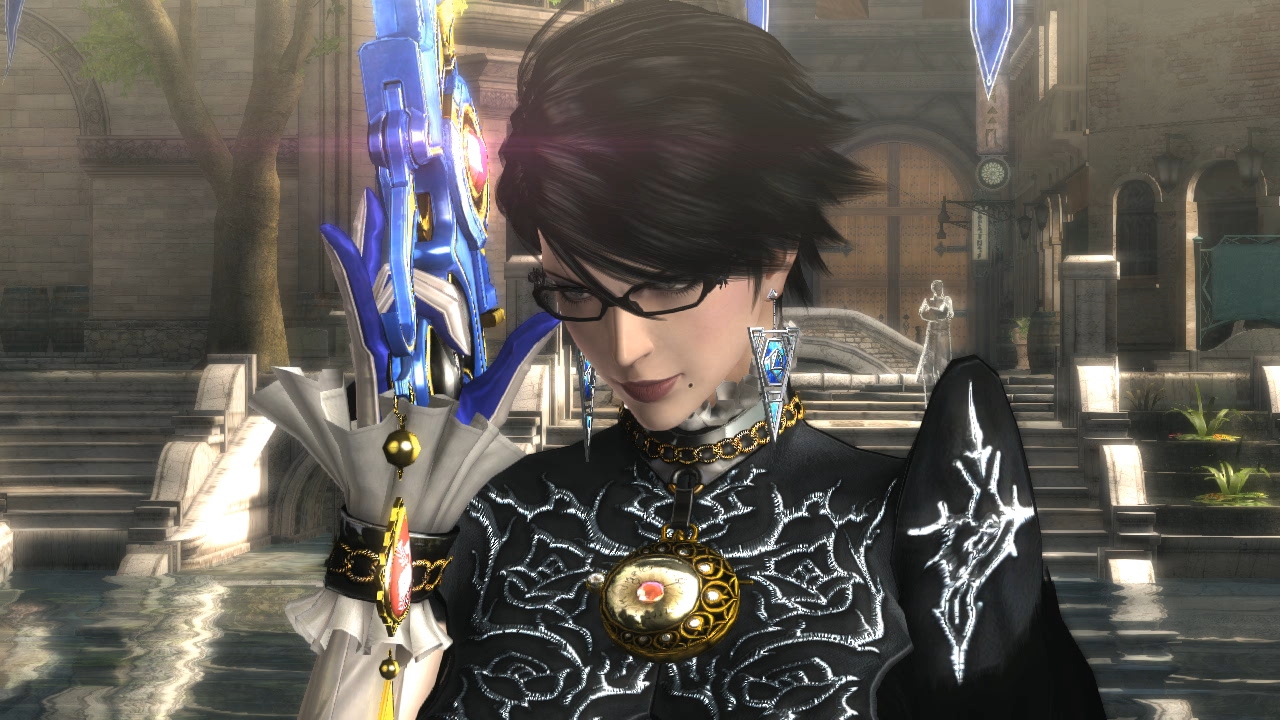 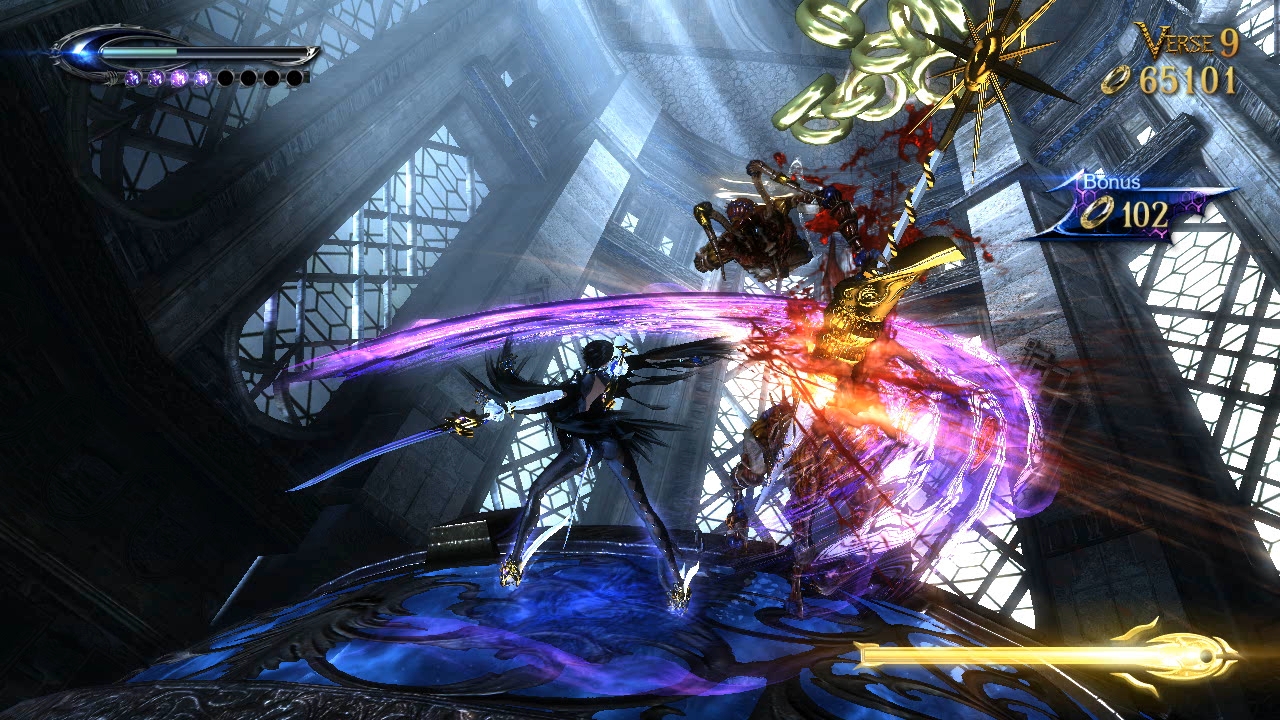 Playing it again on the Switch, I was reminded how good Bayonetta 2 handles. I prefer the Pro controller when it comes to dodging effectively but the Joy-Cons do an adequate job, and while the touch screen might have been a good idea in theory, I much prefer using the other control methods when the battles are so fast and furious.

It runs perfectly find in handheld mode as well as docked with a locked 60fps, something that the Wii U version was unable to accomplish. It runs at a native 720p which is more than enough to appreciate the gigantic boss battles and elaborate set-pieces, but they’re far easier to appreciate when on my TV than they are in the obviously smaller handheld mode.

Fans will get a kick out of cosplaying as characters like Samus, but overall the main game is essentially the same game that was available on the Wii U – except now it runs faster and looks prettier, making for a much smoother experience. I could spend a lot of time talking to you about what makes Bayonetta 2 so fantastic, from the enjoyable Muspelheim challenges hidden around the map, the satisfying success of nailing a combo that never breaks or the sweet moment-to-moment action packed gameplay that keeps you on the edge of your seat during some intense moments. If you missed this on the Wii U – hell, even if you didn’t – pick it up now and get your Witch on.