The Goonies, Losers’ Club and the kids from Stranger Things; media from or set in the 80’s certainly has an obsession with youth setting out on high adventure. Something about these misfit groups coming together to battle the authorities or the unknown while also coming of age is a narrative goldmine—which leaves me perplexed why we’ve barely seen games touch on this recently. Crossing Souls however is here to rectify this.

Crossing Souls comes to us from the oddballs over at Developer Digital and is brimming with 80’s vibes. Chris awakens after a freak storm has struck his small Californian town overnight. Chris’ brother, Kevin, is on the walkie talkie telling him to gather the group and join him by the lake, he has something to show you.

It turns out that Kevin stumbled on a dead body but the body is carrying something in its hand—a stone that lets you experience Duat, the realm of the dead from Egyptian legend. Unfortunately a shady military group have their eyes on the stone and so the gang are up against not only the spooky denizens of the dead but also the authorities, and all of that before you take into account the local gang of bullies, The Purple Skulls.

Balancing combat with exploration you will be platforming around the town while swapping between the five members of the group. Chris is an expert in climbing and has a nasty swing with his Dad’s baseball bat, which he can use to hit back projectiles. The rest of the group brings an array of skills from a gamma ray gun, hover boots, brute strength and aggressive skipping rope. One of the members at first appears to have no discernible talent but as the story goes on their worth will be revealed.

Putting together these skills and the ability to travel between both our world and Duat to solve puzzles will be the core mechanic of your progression. Unfortunately though a couple of the skills are used only a handful of times and they end up feeling useless in the team outside of these particular moments. This isn’t helped by two characters not even having a jump capability meaning they can’t be used in the most standard platforming if you felt like it. 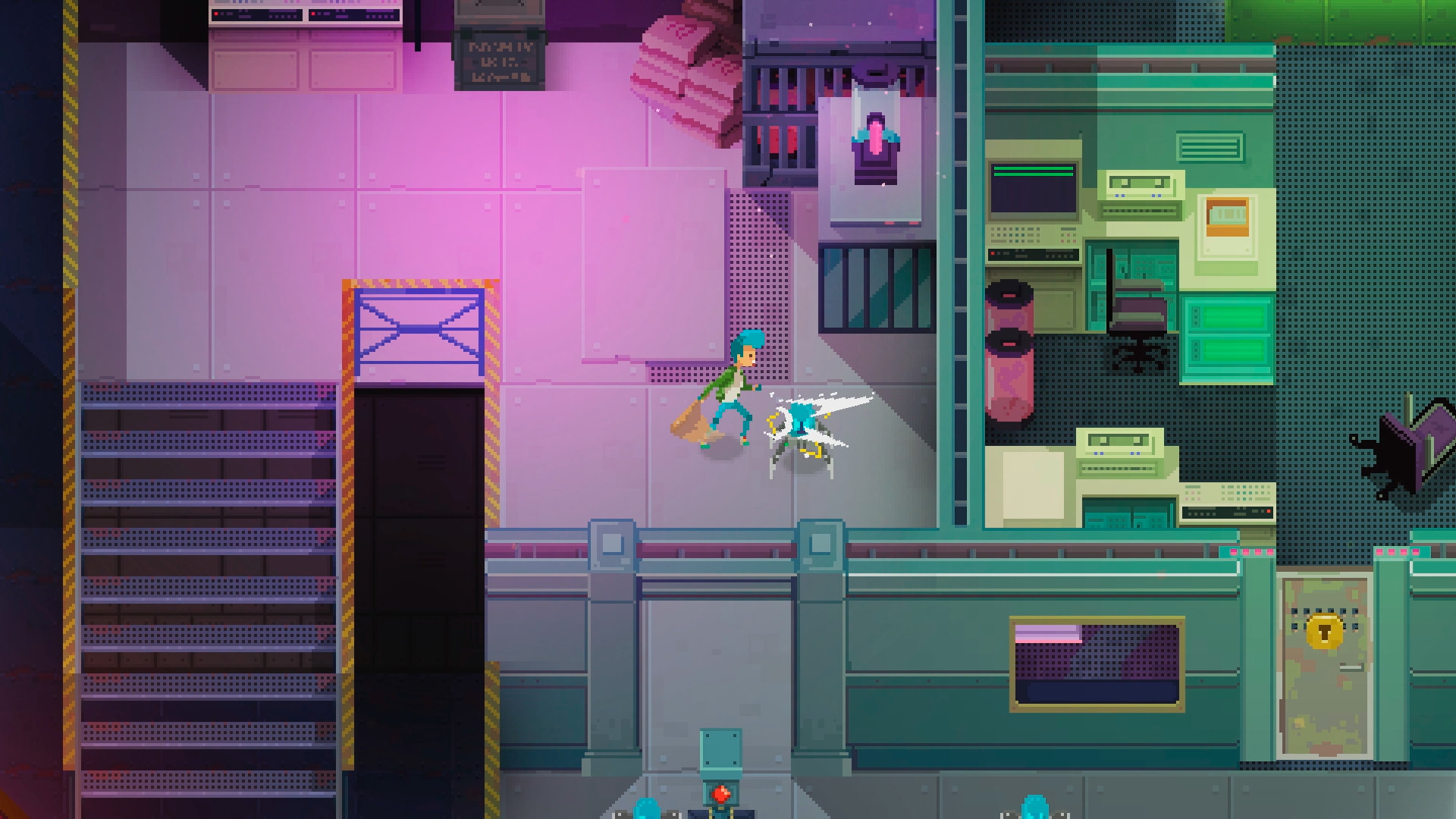 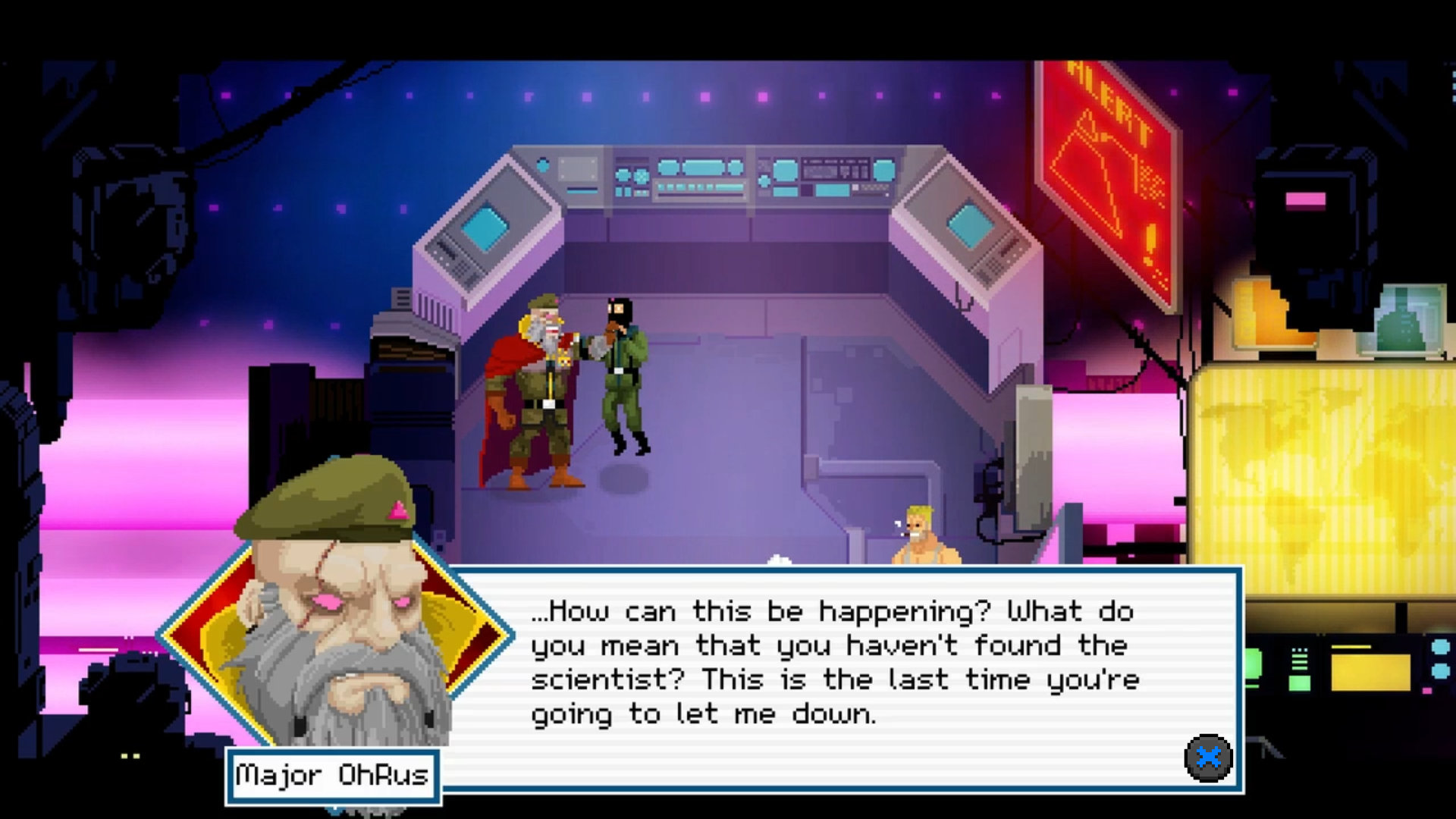 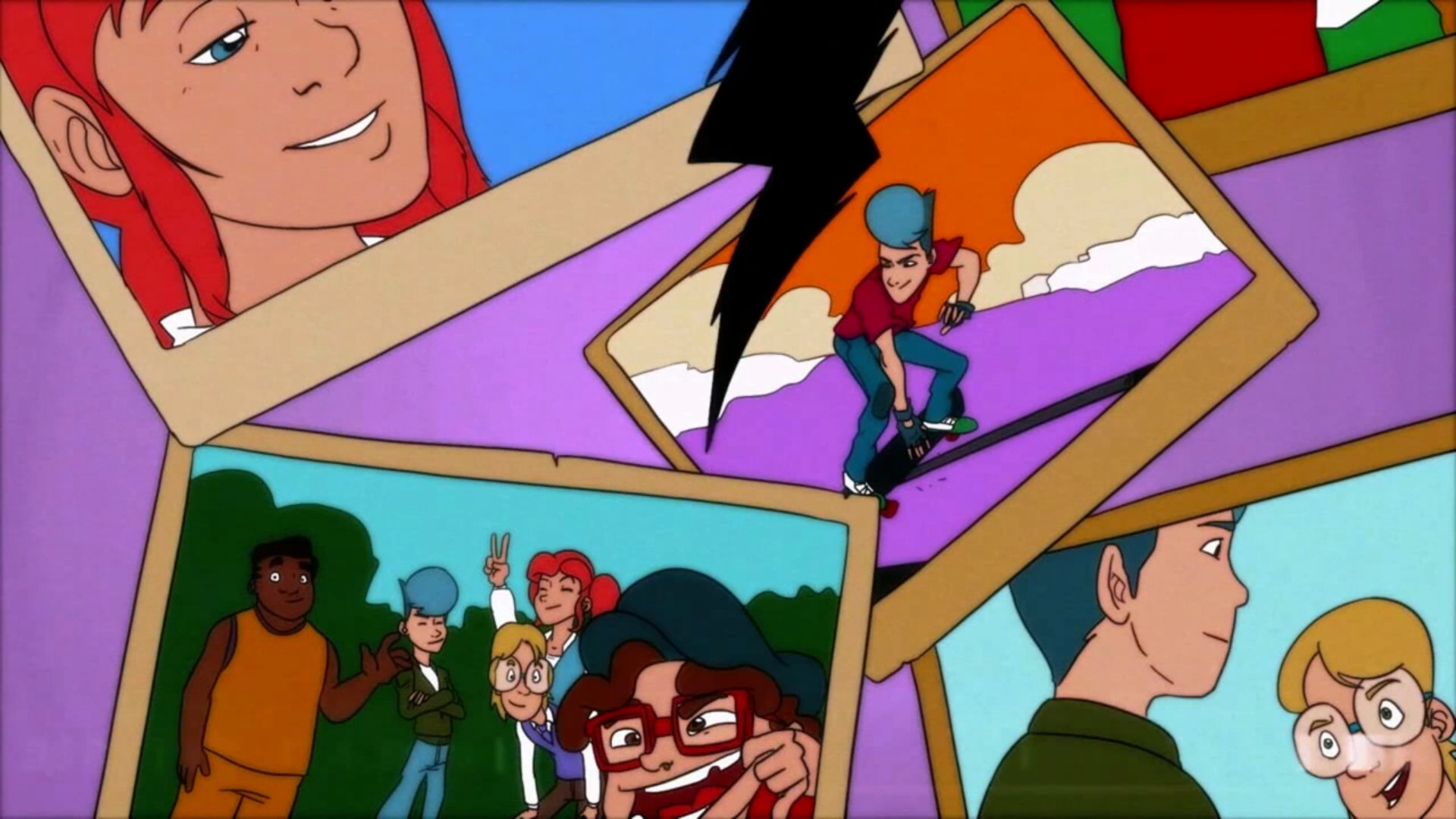 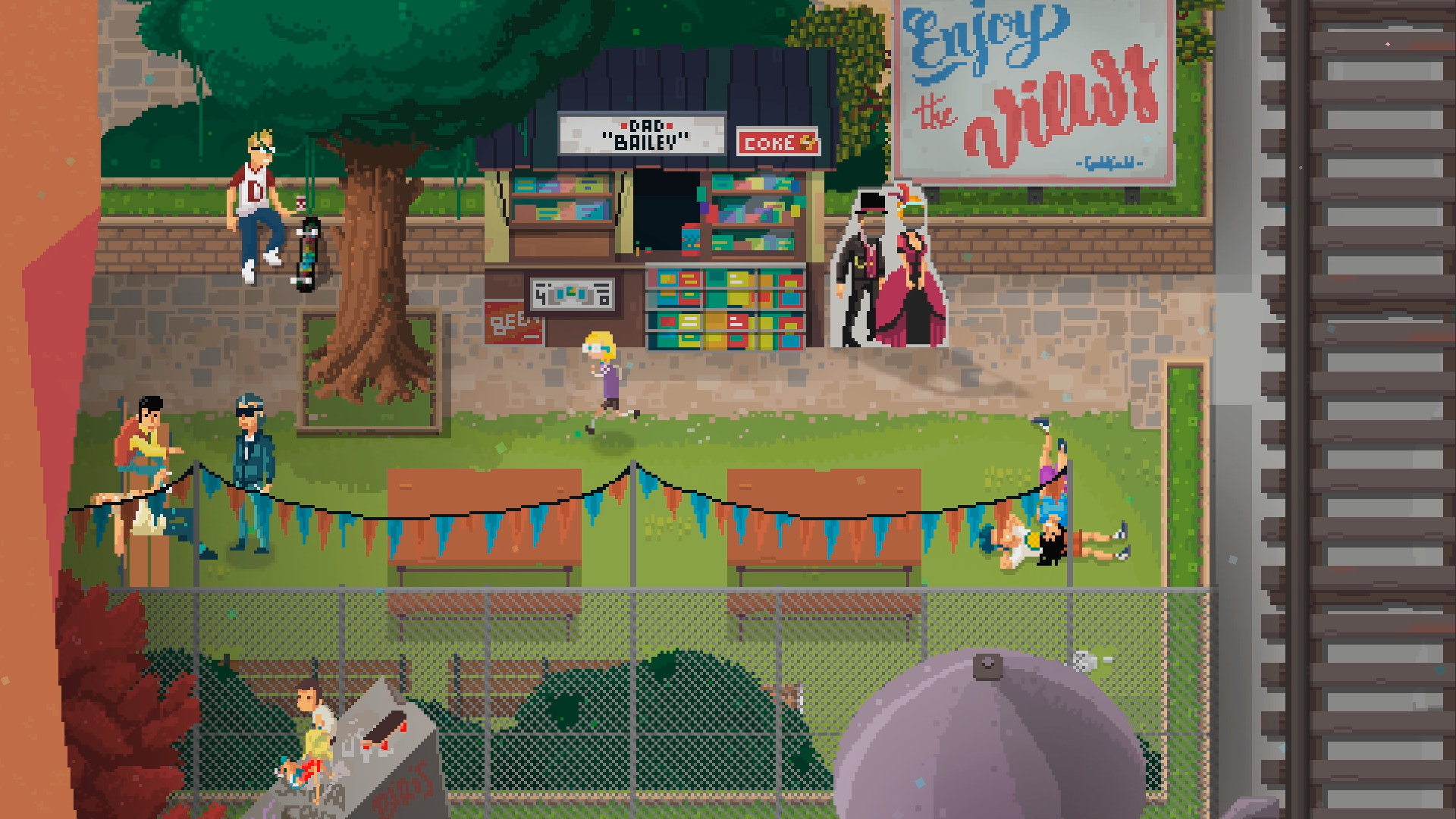 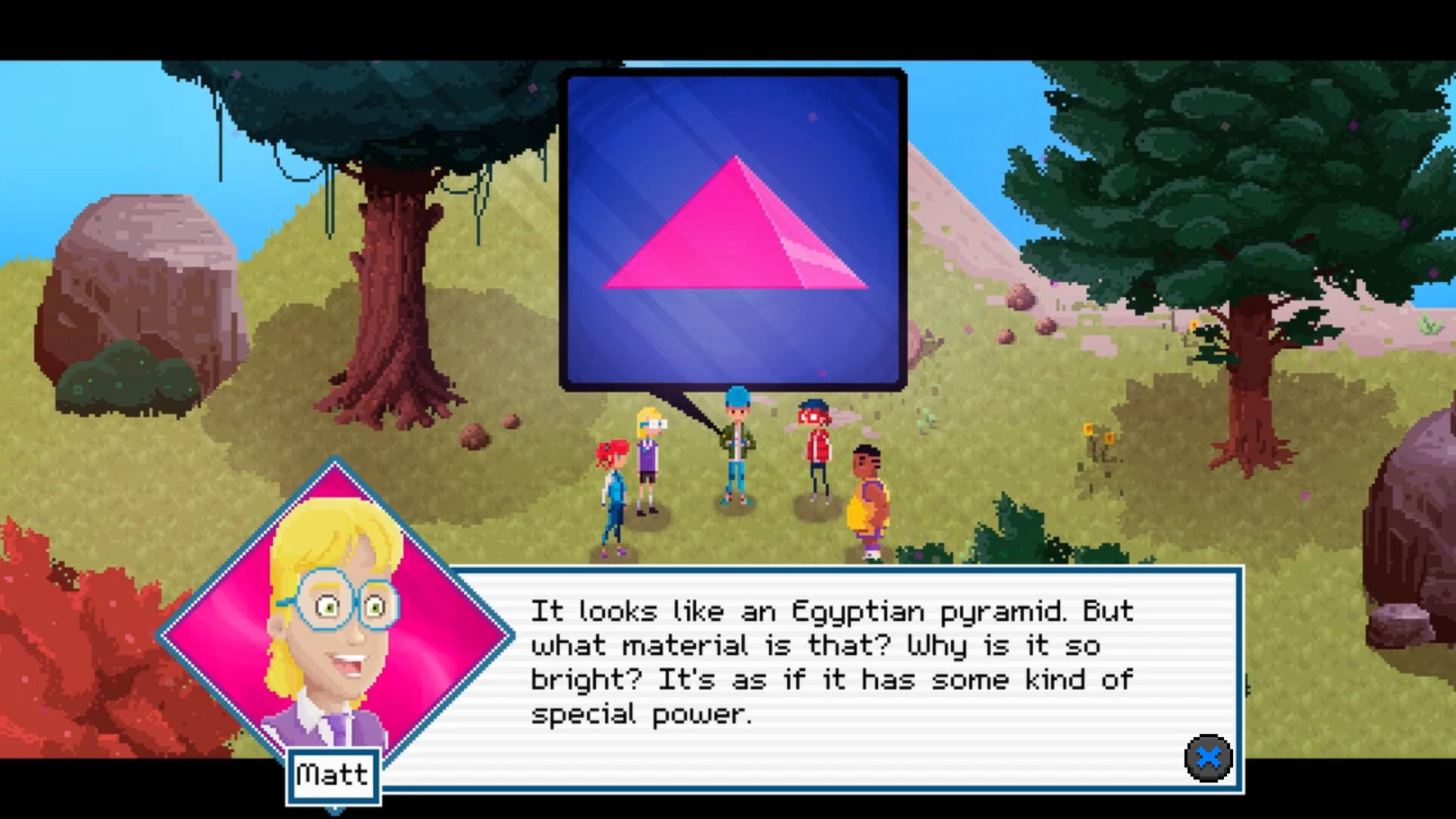 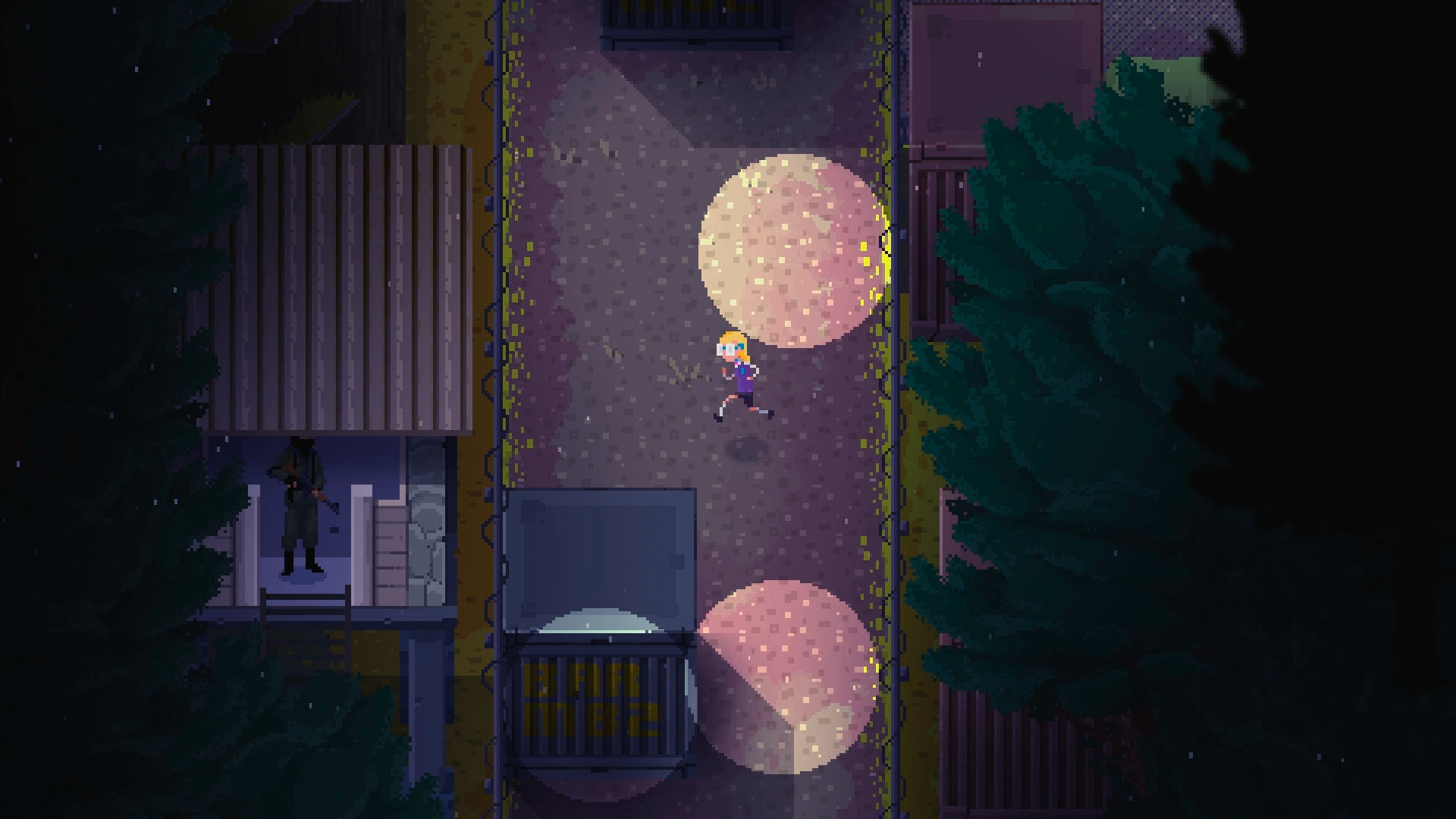 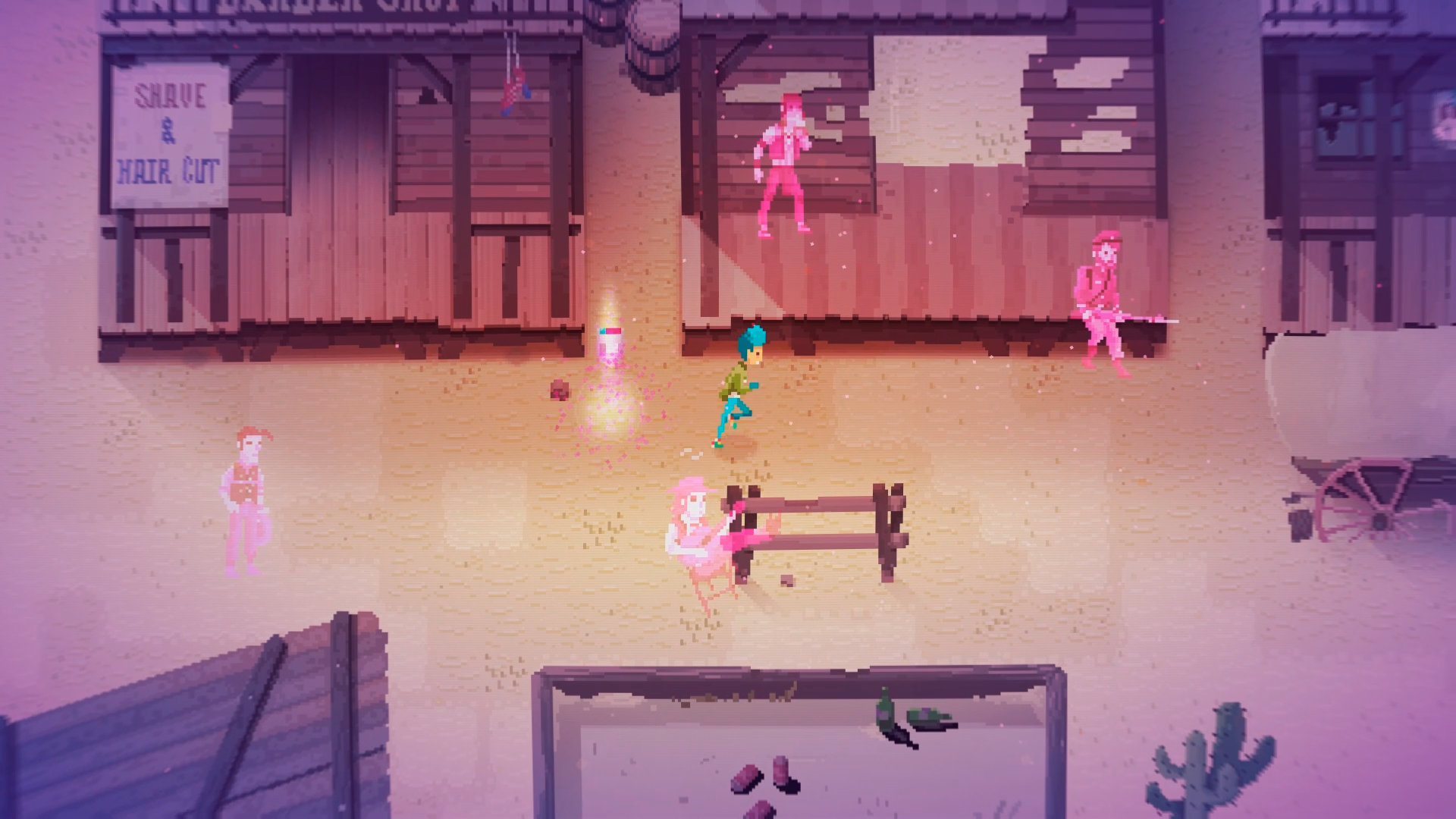 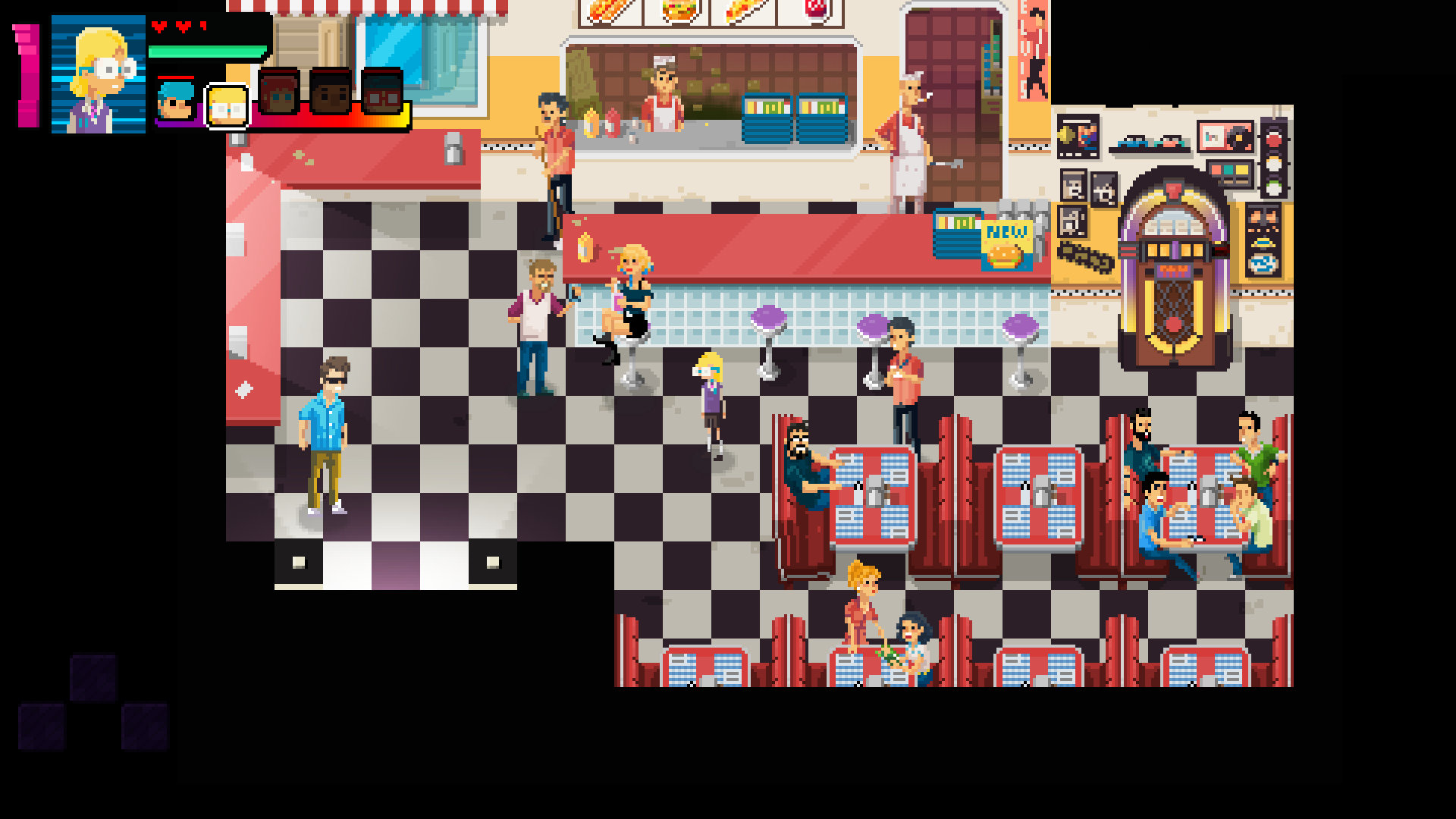 You’ll spend the game swapping between your roster on the fly, each with their own health bars and uses. Combat and platforming skills will use up your stamina bar so you’ll need to make sure that you’re keeping an eye on that. Should the health reach zero on any of your party members it is game over, this can be frustrating in an area that demands you use the characters with the lowest health pool. Apart from that though gameplay is fairly standard with a few mini games to break up the flow. For the most part you won’t feel overly challenged until the final act where there appears to be a sudden spike in difficulty.

Visually Crossing Souls is a treat, a classic pixelated style with a bright colour palette and eye for the small details means that each location feels full and lived in. Swapping between the pixelated gameplay and the hand drawn cutscenes makes the endeavour ultimately feel like a Saturday morning cartoon. This is helped along by an enjoyable soundtrack and a bizarre plot held up by strong script writing. Riddled with pop culture references around the town you quickly get a feel for your rag tag bunch and the little town they want to protect.

While bringing some of the great aspects from the 80’s Crossing Souls certainly has brought a couple of qualities that could have stayed in the past. The rigid manual save point system means that an accident from the sometimes fiddly gameplay can send you back a fair way. Then on top of that you have some fairly unfortunate tone deaf moments creeping through. The token black and female characters of the group fall under very typical stereotypes, the villainous leader of the Purple Skulls has some fairly unsubtle queer coding and one Chinese shop owner selling exotic items probably could have stayed in the film Gremlins. These moments are frustrating because they pop up in a game that is otherwise charismatic and charming.

Crossing Souls wears its influences on it’s sleeve and isn’t ashamed of them. It  is a love letter to an era that was a wealth of inspiration for the imagination. With Stranger Things being such a massive hit as well as the return of “It” to the silver screen it is a genuine surprise we’ve not been inundated with this setting by now. While Crossing Souls isn’t about to win any awards for reinventing gameplay it offers a bit of fun and looks good while it’s doing it.