We’ve all probably flung a frisbee at some point in our lives. Most likely at least one person reading this review right now will be claiming they’ve totally gone pro whilst at a picnic one day. But thanks to High Horse Entertainment we can all now be ultimate frisbee champions with Disc Jam, the latest addition to the Nintendo Switch’s online store.

Originally launched back in March 2017 for Playstation 4 and PC, it recently just released this year for the Nintendo Switch, coinciding with the game’s biggest update since its initial release. In this update were a bunch of new features specifically designed for the game’s port to the Nintendo Switch. Key amongst these were a cross-platform update, two new play modes and a new character called Lannie, a South American volleyball player who is a welcome addition to the obviously small Disc Jam roster.

“In Disc Jam the core concept for gameplay is pretty simple, think of it like tennis with lasers and a frisbee.”

In Disc Jam the core concept for gameplay is pretty simple, think of it like tennis with lasers and a frisbee. Players throw the giant disc back and forth over a net with the objective of protecting their end zone and scoring against the other team. All the while performing a sling of acrobatic moves and extreme disc catching. You’re also able to execute special moves to make it harder for your opponents to return the disc and for you to score those precious game winning points.

Before you step into the main game to test your frisbee flinging skills I highly suggest you take the time to play through the game’s tutorial modes. They wont take you very long  with only a basic and advance training option available but they will give you all the skills you need to start doing some serious Disc Jam damage!

Before you dive in you should also take the time to customise your character as it won’t be an option given to you upon entering a match. Choose your character wisely as each one has their own unique stats and abilities such as running speed and disc throwing strength that they’ll bring to the match. Also in regards to character customisation you won’t find a lot of options available to you from the get go. Instead you will need to play through matches to earn a form of in-game currency which will then allow you to use a spin to win style device that unlocks customisation.

This increasing trend of spin to win and loot box unlocks in gaming is one I’m becoming less and less fond of and with Disc Jam’s already small roster I feel this is a poor choice and could have been left out.

Moving onto the core gameplay you’ll have a few modes to choose from when you start playing. For the most part Disc Jam is aimed at being an online competitive multiplayer, so it’s no shock that the majority of main game options for Disc Jam are for online play. Comprising of singles and doubles tournaments, you’ll pit yourself against players from your region (Oceania for us here in Australia) working your way up the ranks.You’ll also be playing against a mix of Switch players and PC players with cross-play being incorporated here. So it’s worth keeping this in mind when you’re playing that not everyone will be using the same controls as you.

But it’s not all online play. You can also take on players in the game’s offline mode called Ghost Arcade which is made up of AI players based off real world opponents. Matches here are also either singles or doubles and as above are scored by first to 50 points, with the winner being victorious in two-out-of-three rounds. Exploding your opponents with a laser whilst scoring will get you extra style points on top of your goal points so always keep that in mind for offence and defence. 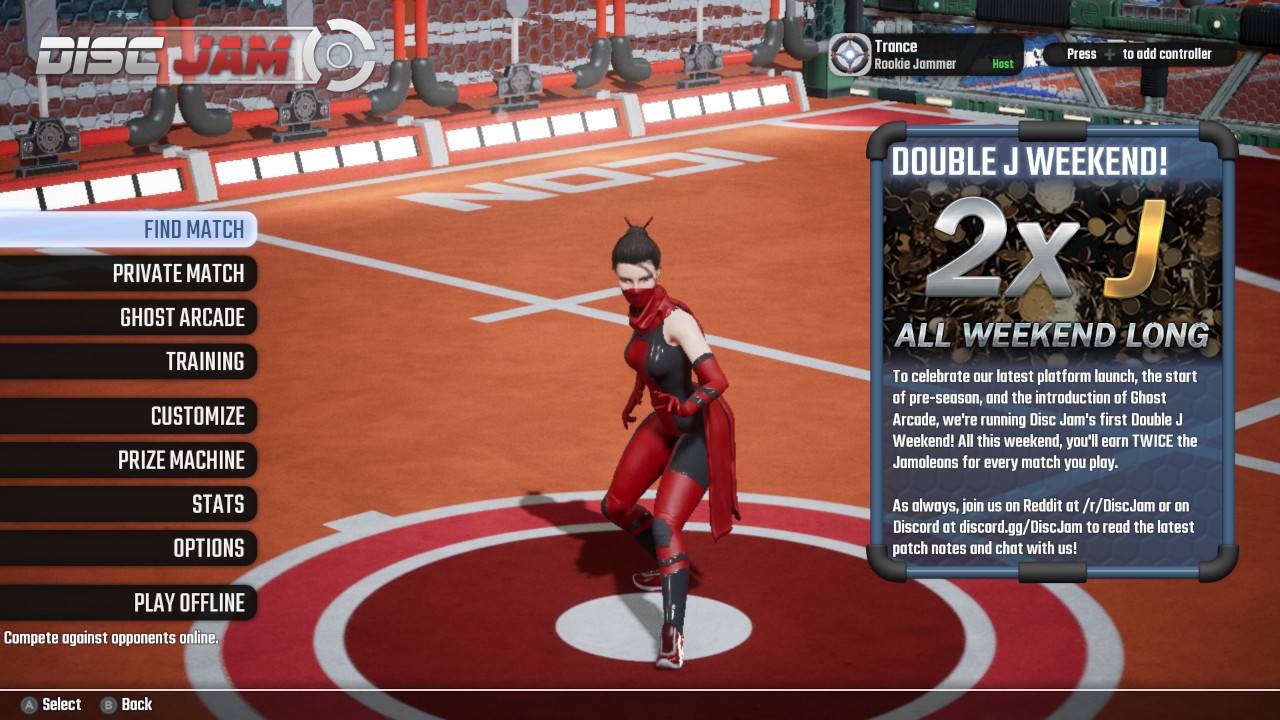 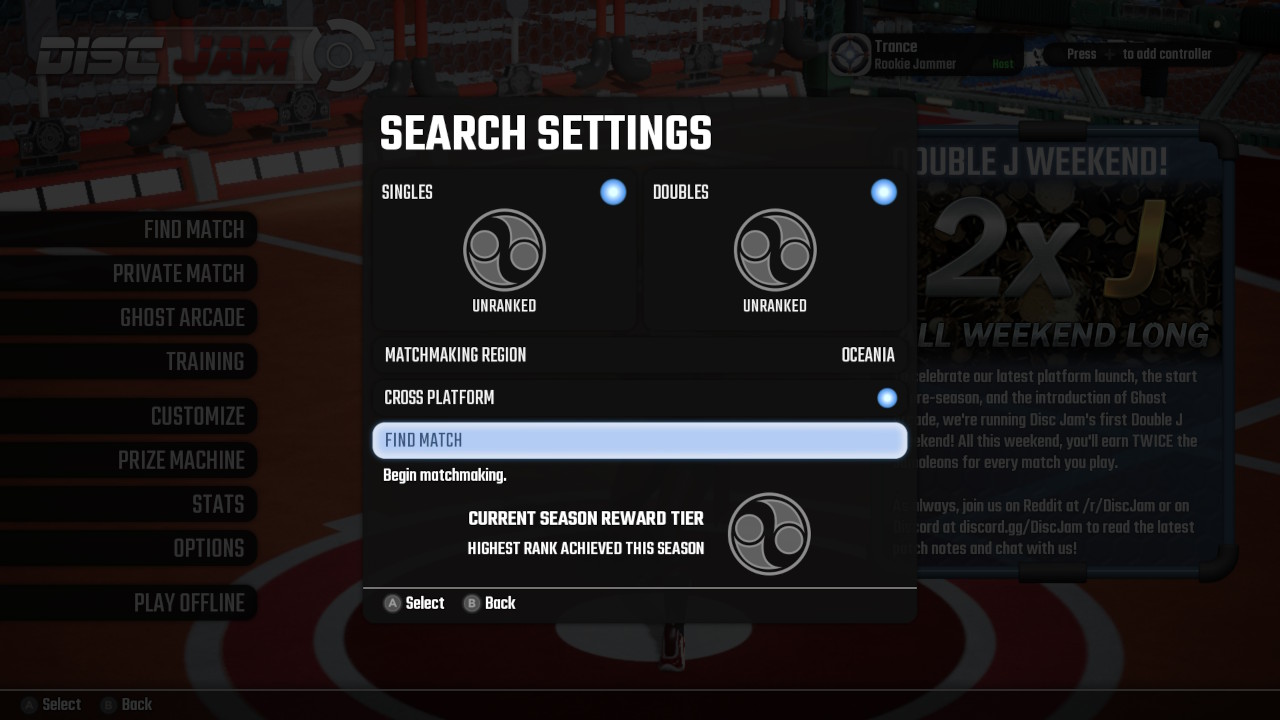 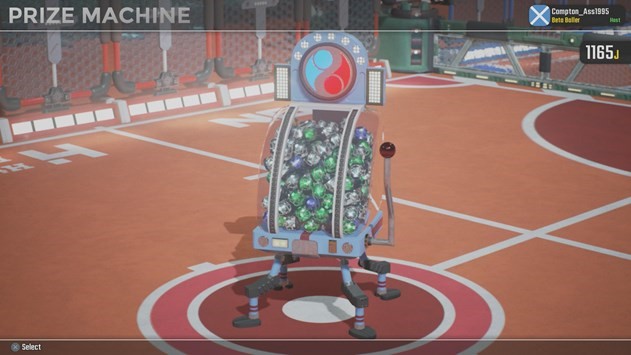 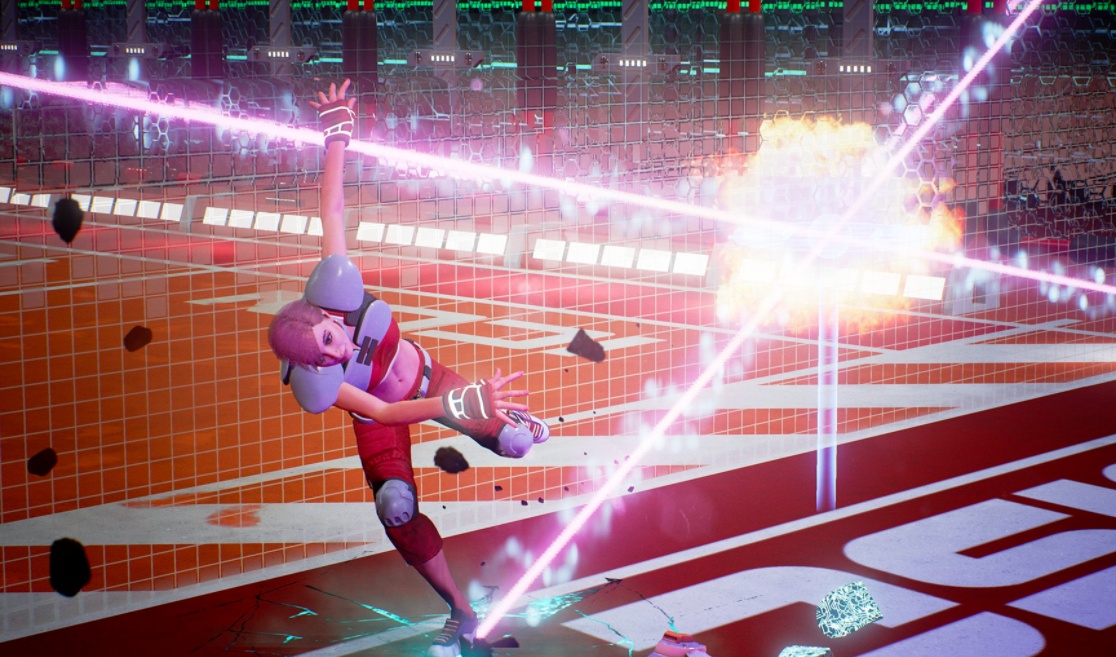 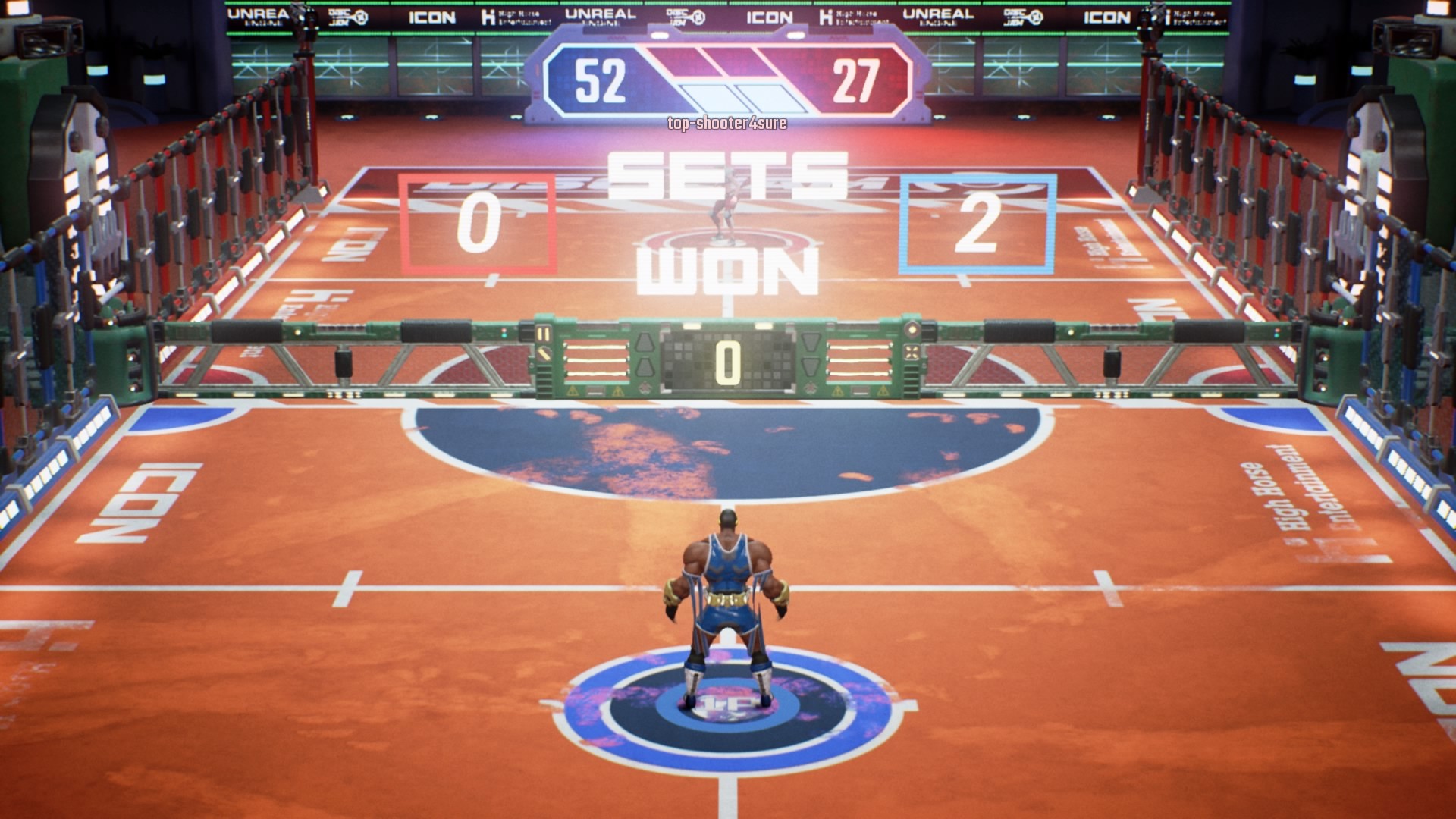 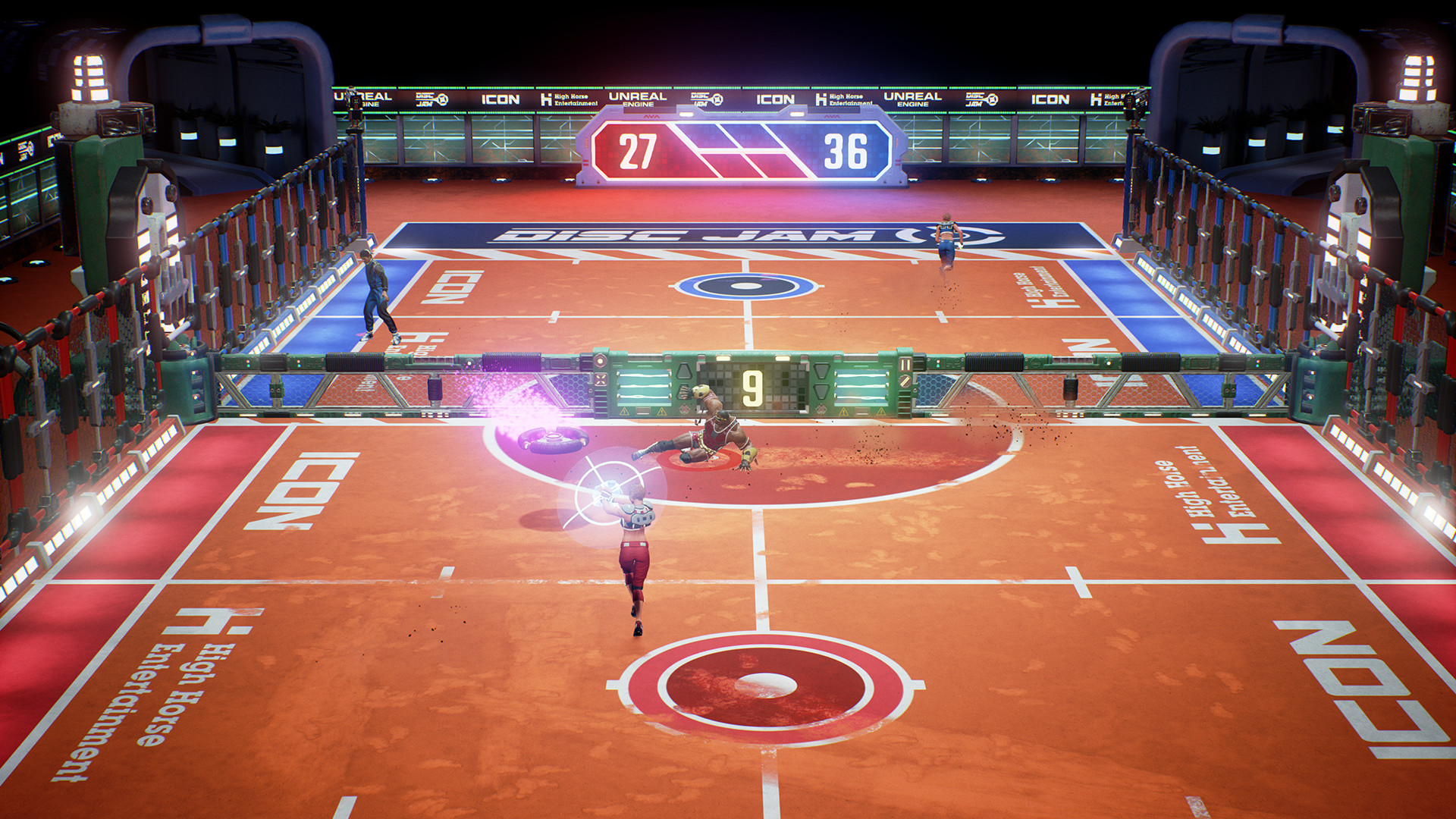 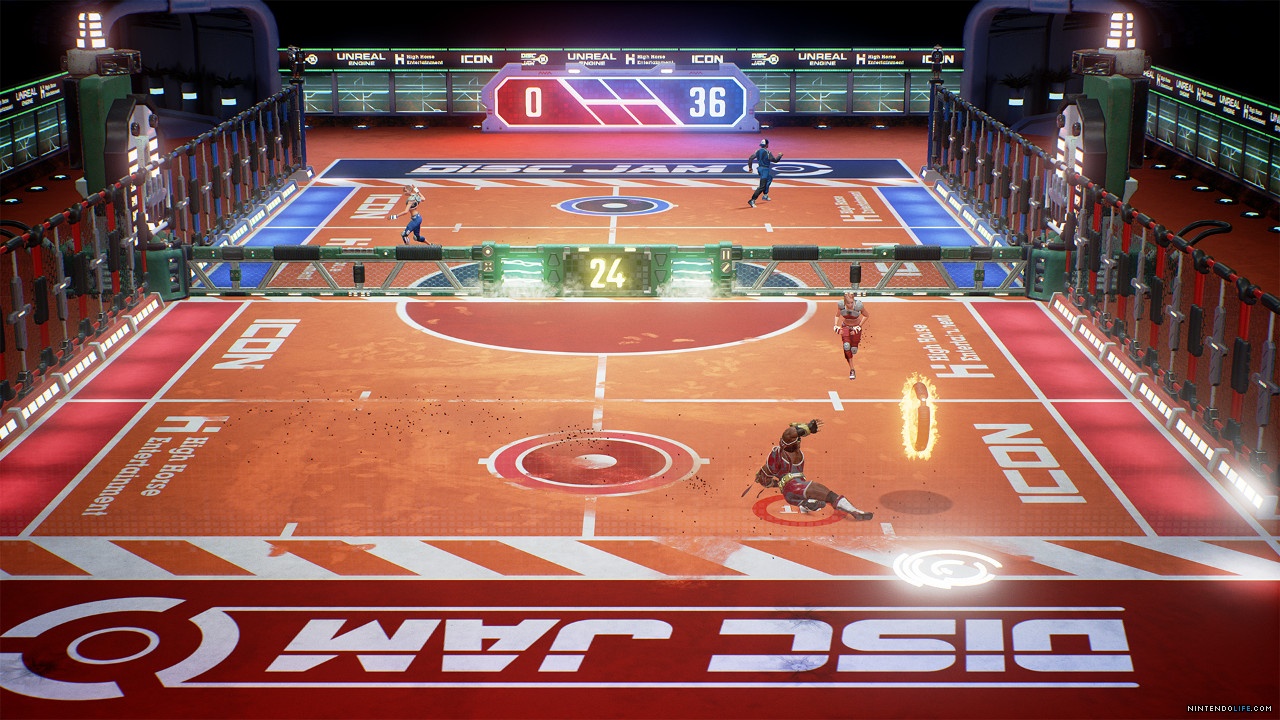 For those looking to take advantage of the Swtich’s unique party game capabilities, you can play split-screen with up to 2-4 players or even host a local wireless LAN party with up to three other Switches. Disc Jam is definitely cementing itself as the new way to play frisbee at your next picnic.

For the most part a match will generally last around 5 minutes so it’s nice to know that you won’t be spending forever in each game and personally I think this quick turn around seems to help keep the online community for Disc Jam active. However don’t be surprised when you start getting your butt spanked with the frisbee rather than throwing it! It’s worth noting that the skill level of some of the online players you will come across is completely overwhelming at first. I personally spent most of my time just shouting “witchcraft!” at first more than anything else. There are no small number of deviously-angled trick-shots to powered up super throws for you to look out for when playing. So like always, practice really does make perfect.

Disc Jam on the Switch isn’t going to be blowing any minds for its outstanding graphics and varied environments or character skins. But where it is making leaps and bounds is by supporting cross-play. Honestly I think it’s this feature alone that will see the game have some sense of longevity well past its prime. This is also why it’s equally as sad that this cross-play feature doesn’t extend past the Switch and PC to include Disc Jam on the PlayStation 4. It’s becoming an unfortunate trend these days and one that’s only hurting the online communities, I hope to see this resolved sooner rather than later.