EA Sports UFC 3 Review – Not quite a TKO

EA Sports UFC 3 quickly sets the tone as soon as you load it up for the first time with its cover star Conor McGregor, introducing you to the games tough striking mechanics and splicing together real world footage with visuals from the game itself to stylish effect. EA has never pulled any punches (sorry) when it comes to its presentation, and UFC 3 is certainly no exception. Fans will appreciate the initial fantasy match-up of McGregor versus Tony Ferguson that allows you to get gritty in a fight before you’ve even seen a menu, and it’s a smart way to get the adrenaline going straight away. Despite being a solid striker however, there are still some elements that need tweaking in the franchise to truly make it a championship contender.

The world of MMA is exciting for a number of reasons, and the presentation of UFC 3 follows up on its intro sequence with a game that absolutely looks and sounds the part. Sweat flies off of fighters with every punch, blood stains the canvas and faces bruise and swell with a nasty realism. Crowds cheer when a chain of attacks hits effectively and the commentary backs up this excitement; it gets the heart pumping and does a brilliant job of recreating its real-life counterpart.

With the presentation at its best, it’s good that the gameplay has also been modified since the last iteration of the series, specifically when it comes to the striking component. Small changes have been made that make a world of difference, including the ability to land blows while your character is moving and move the right stick to be able to adjust your body and head positioning to avoid incoming attacks. This may not sound like much but it impacts the way a match flows quite heavily, as you can now balance timing, distance and your choice of punch or kick with a stamina bar that penalizes you for bad decisions.

Button masher this is definitely not. You need to keep an eye on your stamina, constantly blocking and trying to keep an eye on what moves your opponent is making so you can take advantage of them where possible with a well placed kick to the face. A new control scheme makes things tricky at first with a variety of moves that require pressing multiple buttons at once, but once you find a rhythm to ducking, weaving, jabbing, uppercuts and large strikes, it starts to feel like a hyper-violent choreographed dance between you and your foe. 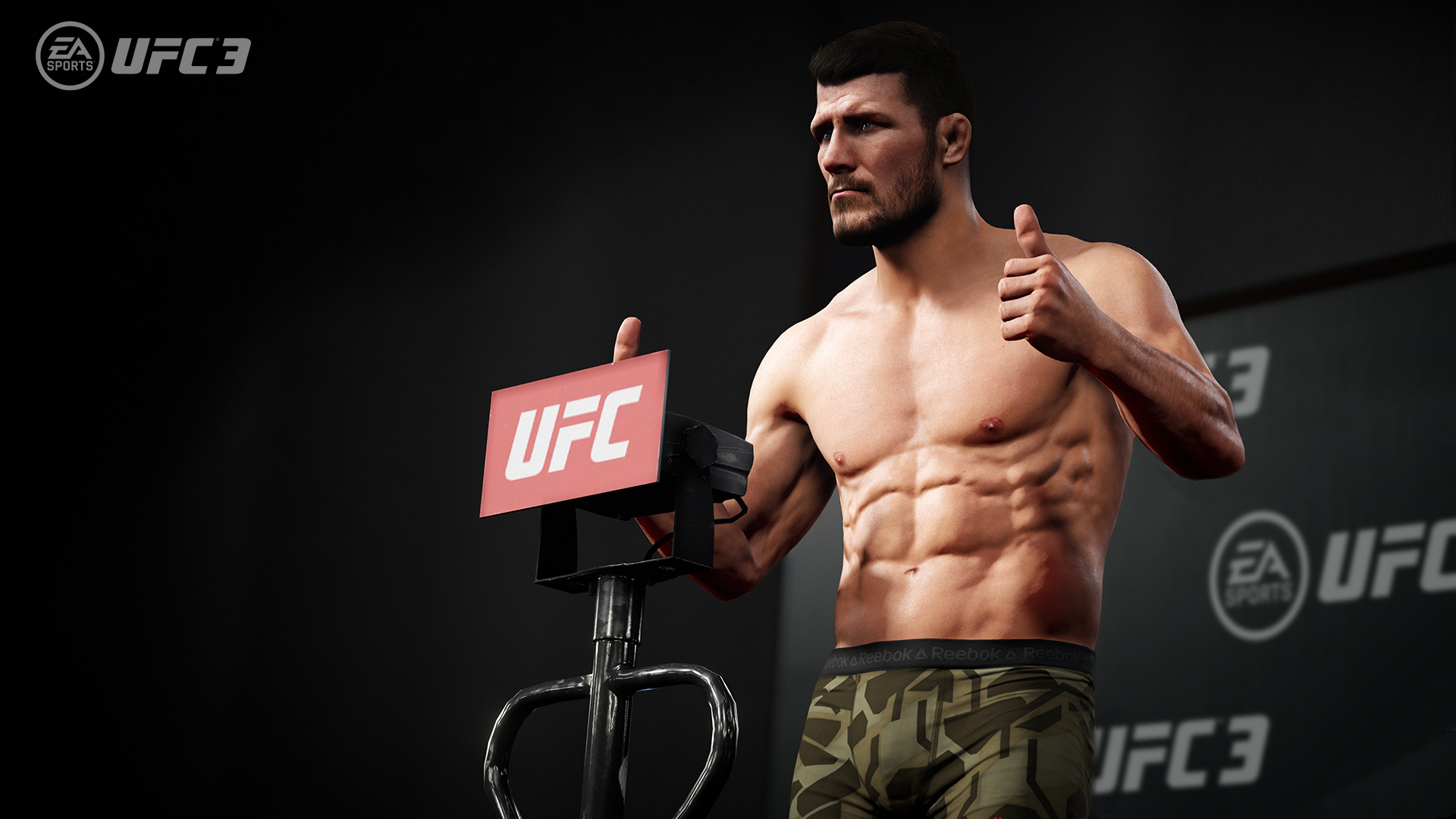 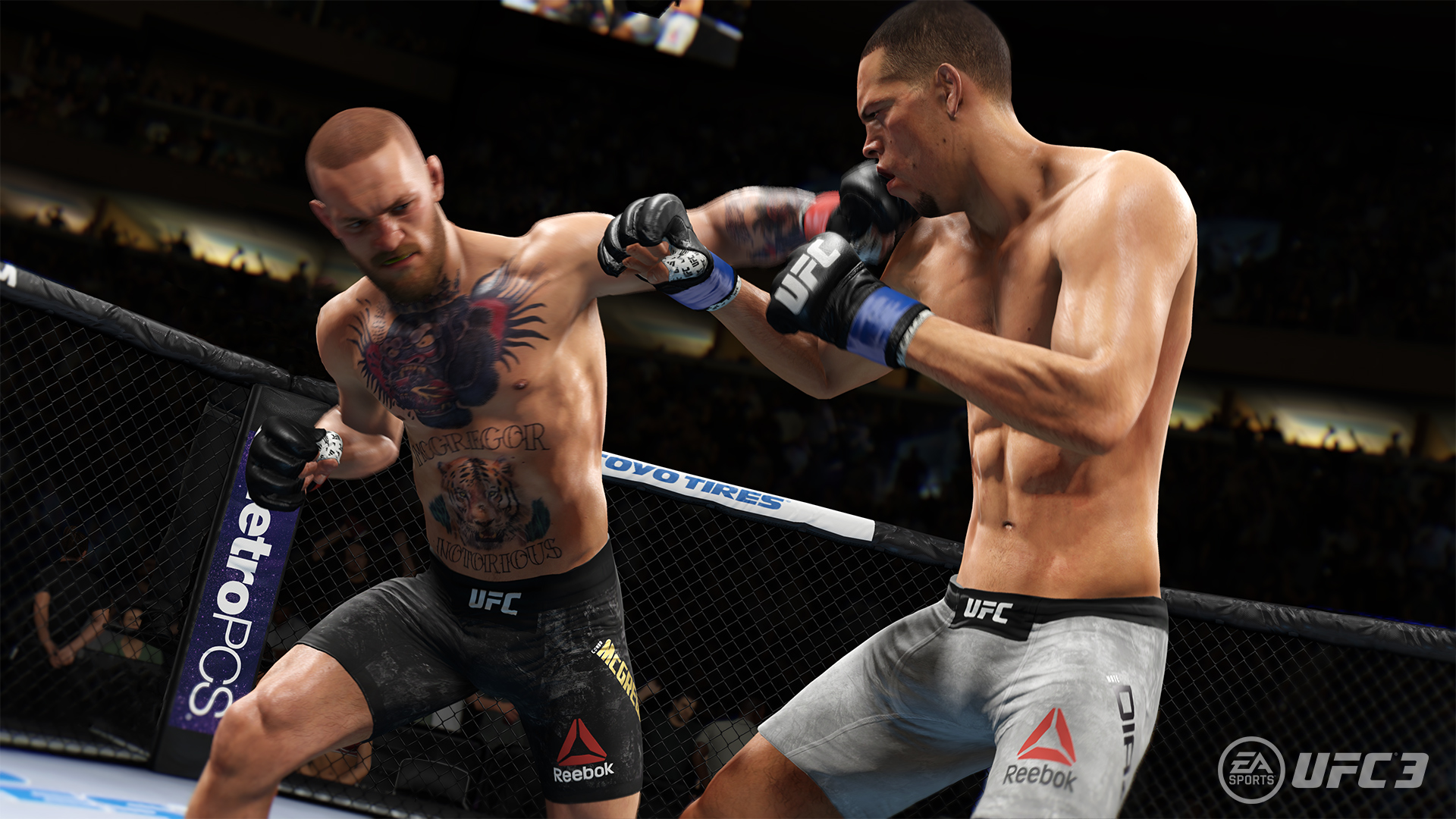 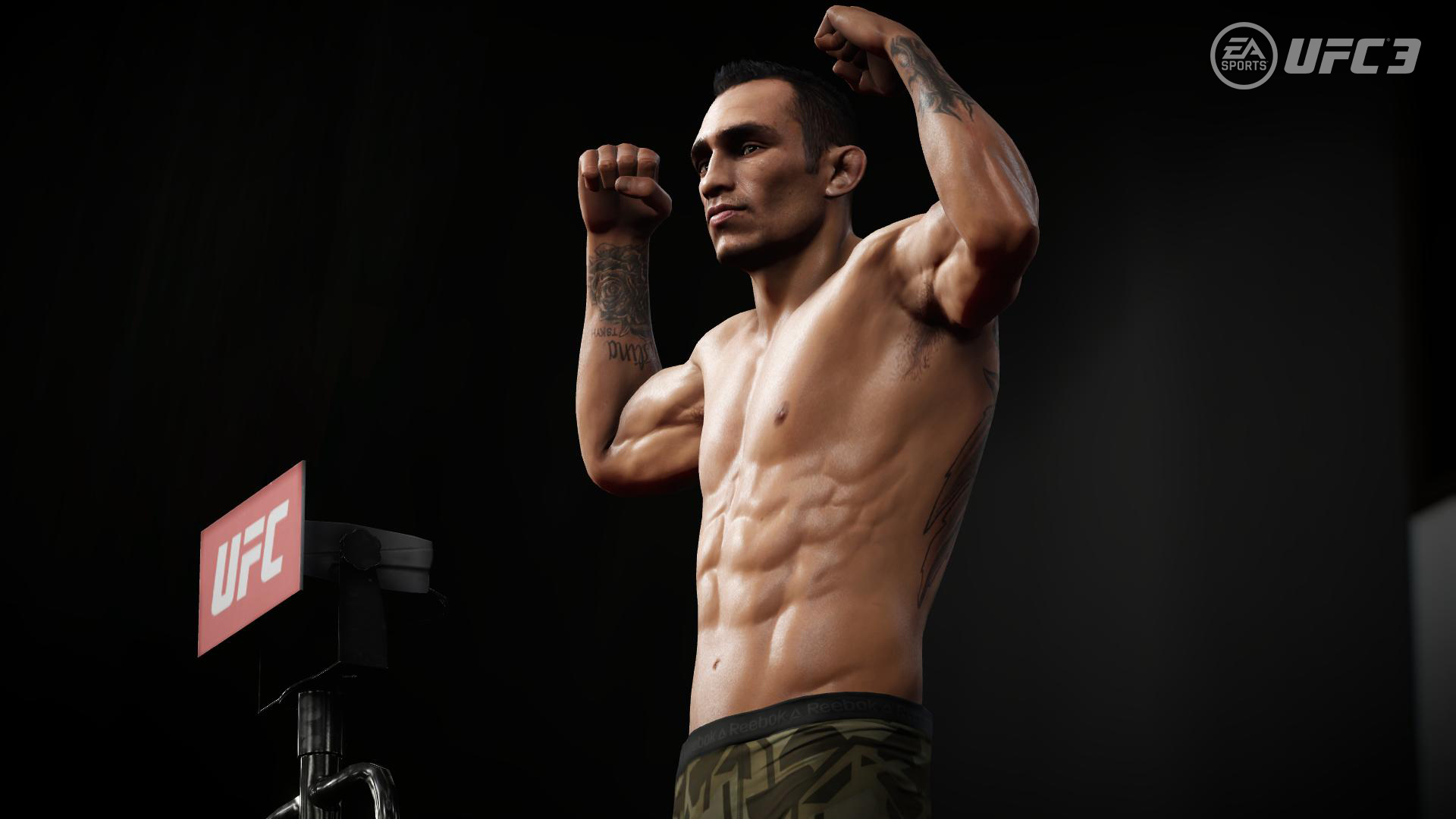 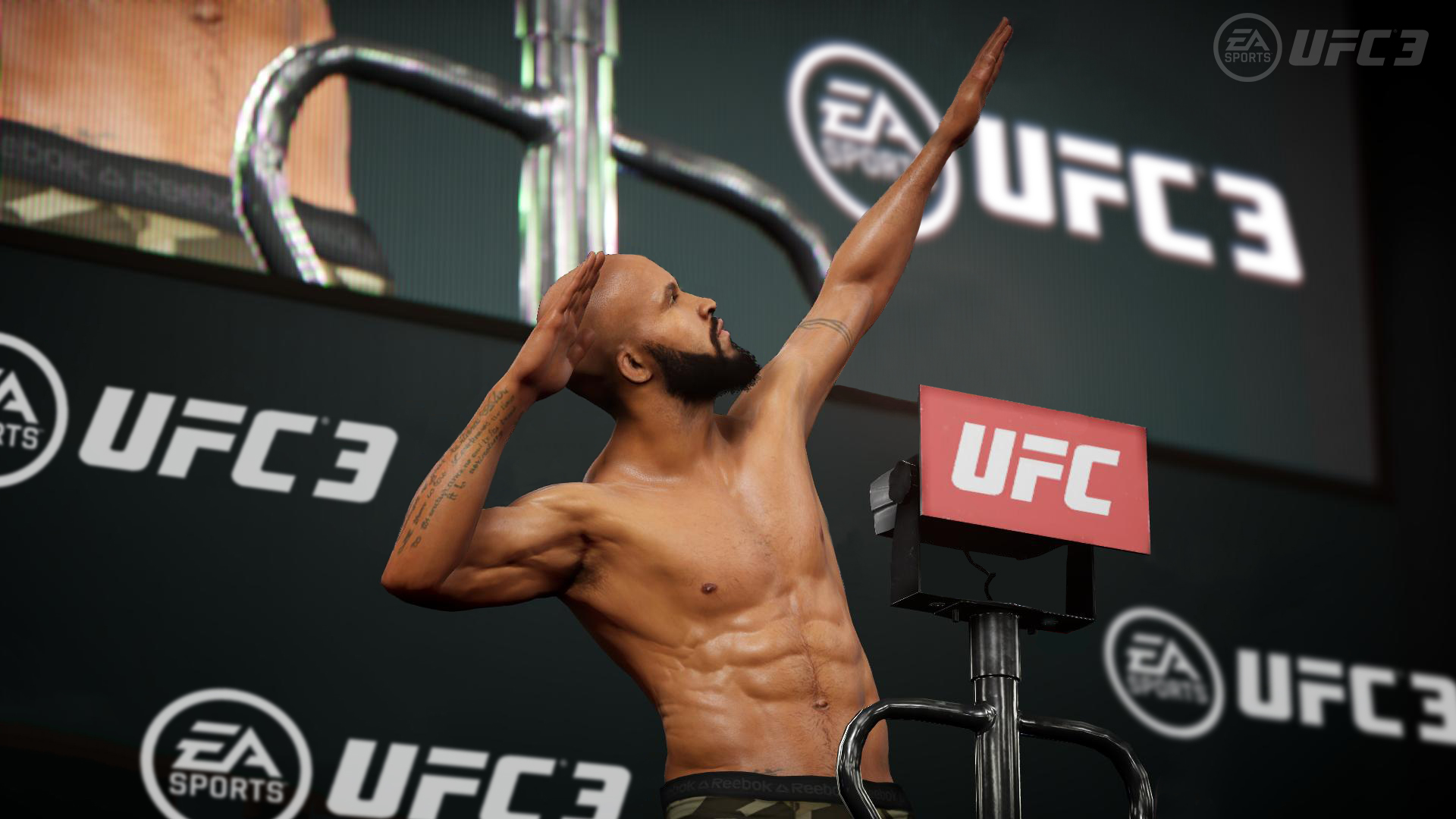 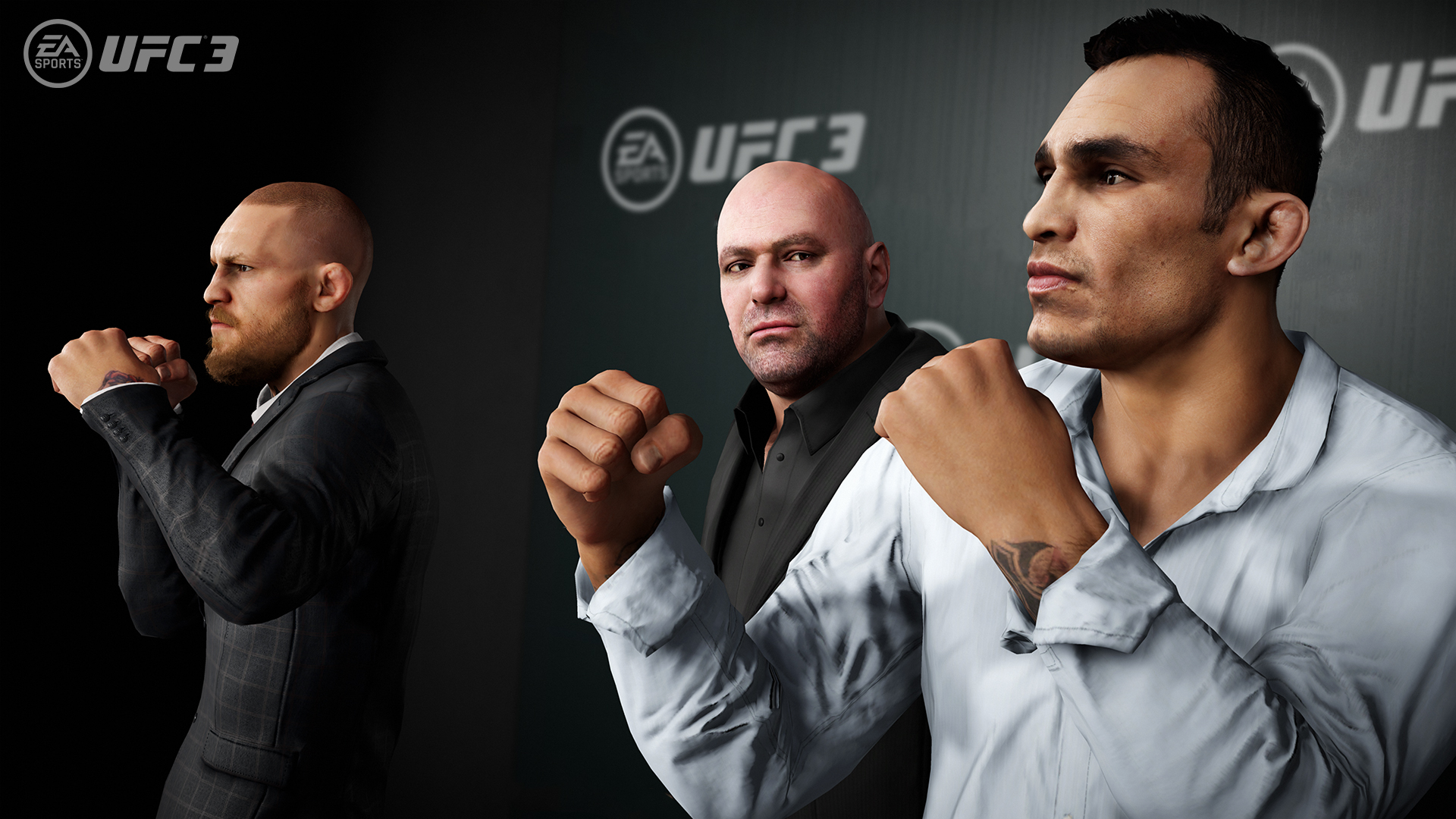 While the revamp in the striking is definitely a step-up, the grappling portion of UFC 3 still feels like a repetitive and boring mini-game that is more reliant on watching the on-screen indicators rather than the action on the mat. When you initiate a grapple or takedown, it flicks to a game of  “who can press the right stick in the right direction the quickest?” as you jostle between a range of different positions, trying to gain the advantage. I know some of the terminology which gave me a vague understanding of transitioning from hold to hold, but for amateur fans this could take some time to get used to.

I found myself trying to revert to one of my go-to moves of trying to get on top of my opponent and punching down to try and get a quick knockout, as I never found it enjoyable trying to move into an actual submission attempt to make my opponent tap out. Once you’ve locked in a submission like an armbar, another mini-game triggers, where you must move the right stick in a direction of your choosing, while your opponent has to move it in the same direction to try and counter you. This happens for a few stages (unless your opponent is very worn down) until they tap, or the hold gets broken. To put it bluntly, it’s not fun, and is the same complaint I had with UFC 2. Given how much fun these moments can be to watch live, it’s a shame that it’s been reduced to such a boring, repetitive mechanic.

“You never feel too bogged down in menus, which keeps things moving at an enjoyable pace with relevant rewards”

There are several game modes available once you’ve gotten used to the controls, with the G.O.A.T. Career Mode likely being where you’ll spend the majority of your time. You must upgrade your stats and win fights as a newbie in the regional circuit before Dana White offers you a UFC contract so that you can work on your path to championship glory. In-between bouts you can train at the gym, whether via simulated skill point allocation, sparring with an opponent or other challenges, along with juggling your social media to build fight hype and get more fans. You never feel too bogged down in menus and the gaps between fights are pretty short (as they should be), which keeps things moving at an enjoyable pace with relevant rewards.

Ultimate Team makes its return, featuring a combination of fighting and… booster packs with cards representing fighters and moves. There are micro-transactions to purchase card packs with real world money, but before you get your pitchforks out it should be noted that you can earn these with in-game currency as well. I spent plenty of time in Ultimate Team without spending a dollar. Assigning blank fighters a range of moves and perks based on the luck of the draw is fun at first but I didn’t find it anywhere near as captivating as the career mode, with the randomness of the card packs rendering most of them to have little meaning.

There’s a range of multiplayer modes as well as offline modes that test you on specific disciplines such as Stand and Bang (yep) that allows you to focus entirely on striking, with Submission Showdown aiming at the ground game (but I’m not sure I’d want to spend much time there unless practicing). Knockout Mode has you trying to KO opponents with a certain number of strikes and includes commentary from Snoop Dogg for some reason, which I guess is cool if you like him but wasn’t a selling point for me personally.

EA Sports UFC 3 takes some steps in the right direction with an enjoyable career mode a revamped striking game that feels fluid and exciting with momentum that builds as you look for that sweet combination that will have your opponents seeing stars. The flip-side is that the submission game is stale and frustrating, almost to the point that I wish it wasn’t there; it’s a huge part of UFC and MMA in general, so I’d love it if the same attention was paid to revamping that system in the inevitable sequel.  Even with its flaws, there’s no denying the high presentation quality is going to put a smile on fans faces. Overall, EA Sports UFC 3 just isn’t quite the knockout that it could have been.