Attack on Titan 2 is a third-person action game with slight RPG elements by Koei Tecmo, the long awaited sequel to Attack on Titan: Wings of Freedom and an extension to the amazing animated world that is Attack on Titan.

For some, the sequel to 2016’s Attack on Titan: Wings of Freedom has been a long time coming, but that wait is over and I’m here to tell you it was most definitely worth it! Attack on Titan 2 isn’t quite the follow on sequel most people are accustomed to, instead of picking up at the end of the first game (which covered most of season one of the anime), Attack on Titan 2 essentially starts you all over again. Where in Wings of Freedom players were able to play as Eren or Mikasa, in the sequel you’ll play as a custom scout, experiencing the story of the Attack on Titan series 1 and 2 as you play.

Having the ability to be a custom character is a wonderful idea as it allows you to see the story unfold from a whole different perspective, even if the custom character’s path in the game basically mirrors that taken of Eren, Armin and Mikasa.

Before we jump too far into it I feel I should mention that just because Attack on Titan 2 crosses back over into the story of the first game doesn’t mean it’s not a totally different game and worthy of your attention. Titans are vastly different beasts in this game than the first and will require a lot more of your attention to kill, not to mention it’s far more satisfying and fun to kill them here than in the first. There is also now a lot more to do outside of battle with the new “Daily Life”  feature. Here is where the game becomes more of an RPGin some aspects and we will touch more on this later in the review.

For now however lets start at the beginning. If you’ve watched the Attack on Titan series at all then you’ll have some idea on what to expect from the opening sequence, if not then be prepared to have your mind messed with and blown away at the same time as you become one of the members of the 104th Cadet Corps.

“…take on Titans, hacking and slashing your way to victory all whilst boosting in the air and throwing zip-lines against various structures with your ODM Gear to propel yourself onwards.”

Stepping into Attack on Titan 2 you’re going to be given the basic character choices. Essentially the first few chapters here are a tutorial mode and once completed you’ll be allowed to change your character with much greater detail in your private room so don’t stress too much on this decision. Moving onto combat, whilst the controls are simple enough you’re going to have to learn to multi-task. The game will require you to take on Titans, hacking and slashing your way to victory all whilst boosting in the air and throwing zip-lines against various structures with your ODM Gear (Omni-Directional Mobility Gear) to propel yourself onwards.

Sounds simple enough? Now add to that trying to read a mini map and additional mission objectives via subtitles at the same time and this is where things start to ramp up. It was a problem a lot of western players experienced during the first game and one I see popping up again now. I personally often found myself being forced to either miss dialogue, or stop playing altogether just to read the subtitles. 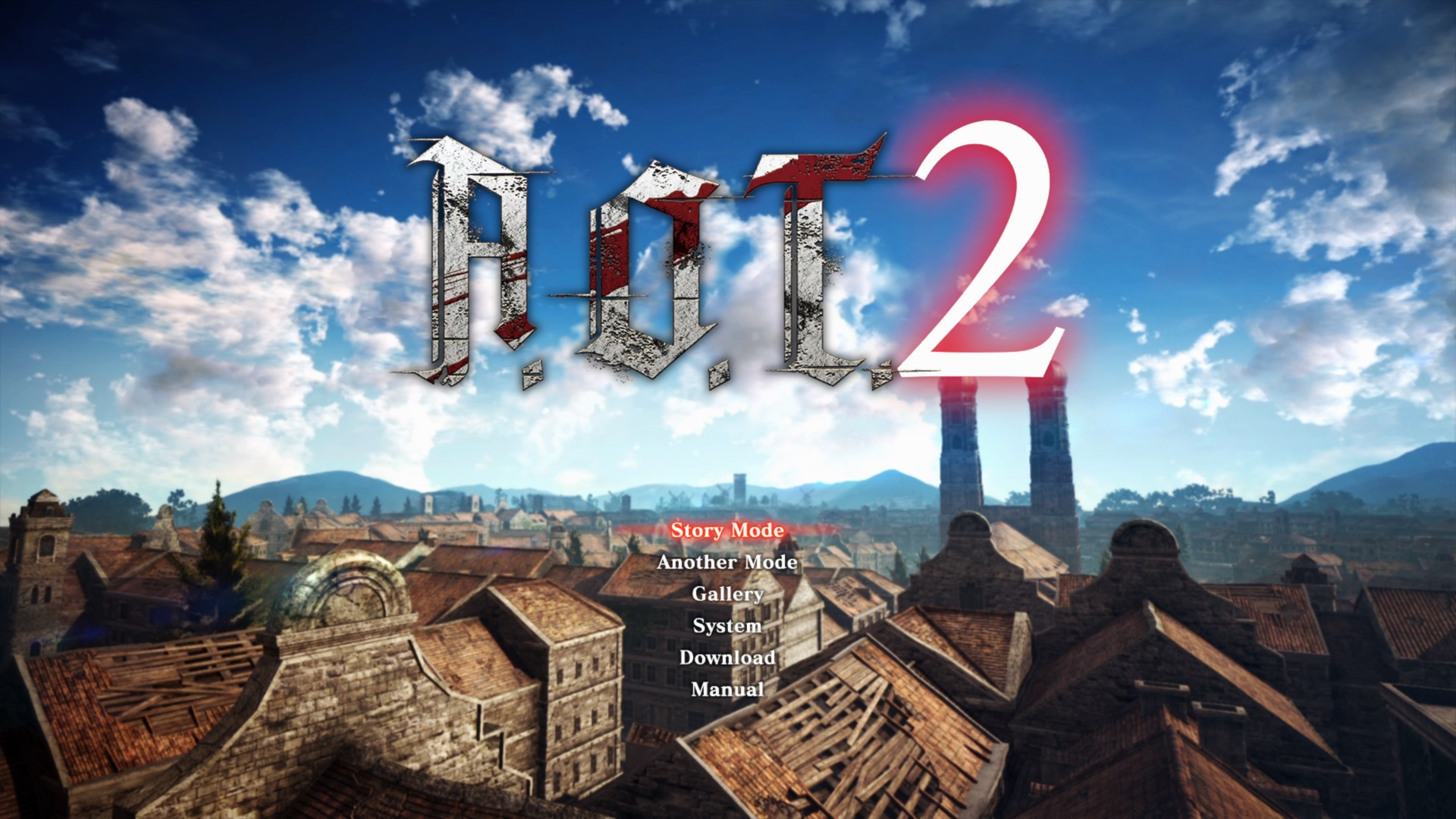 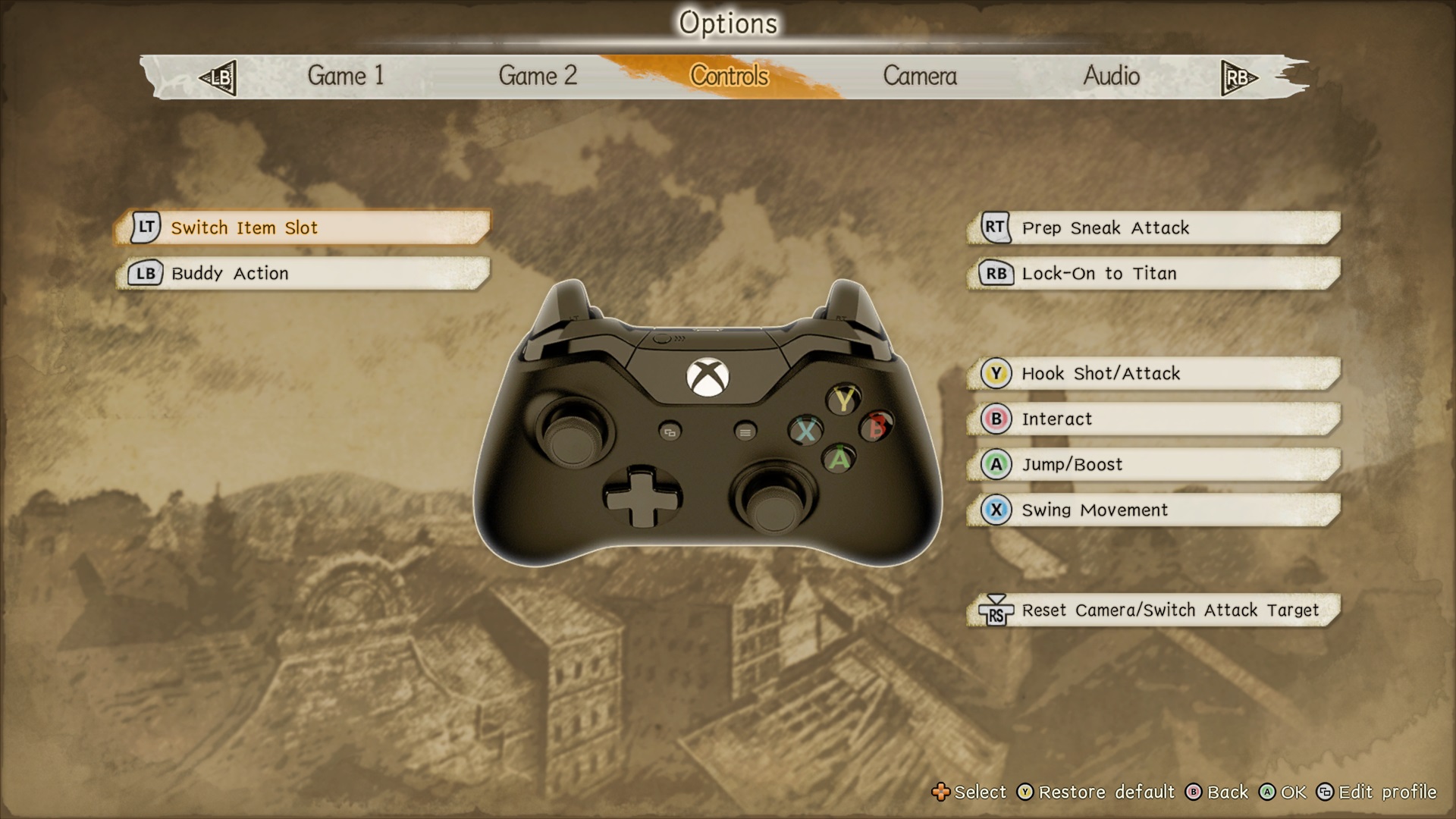 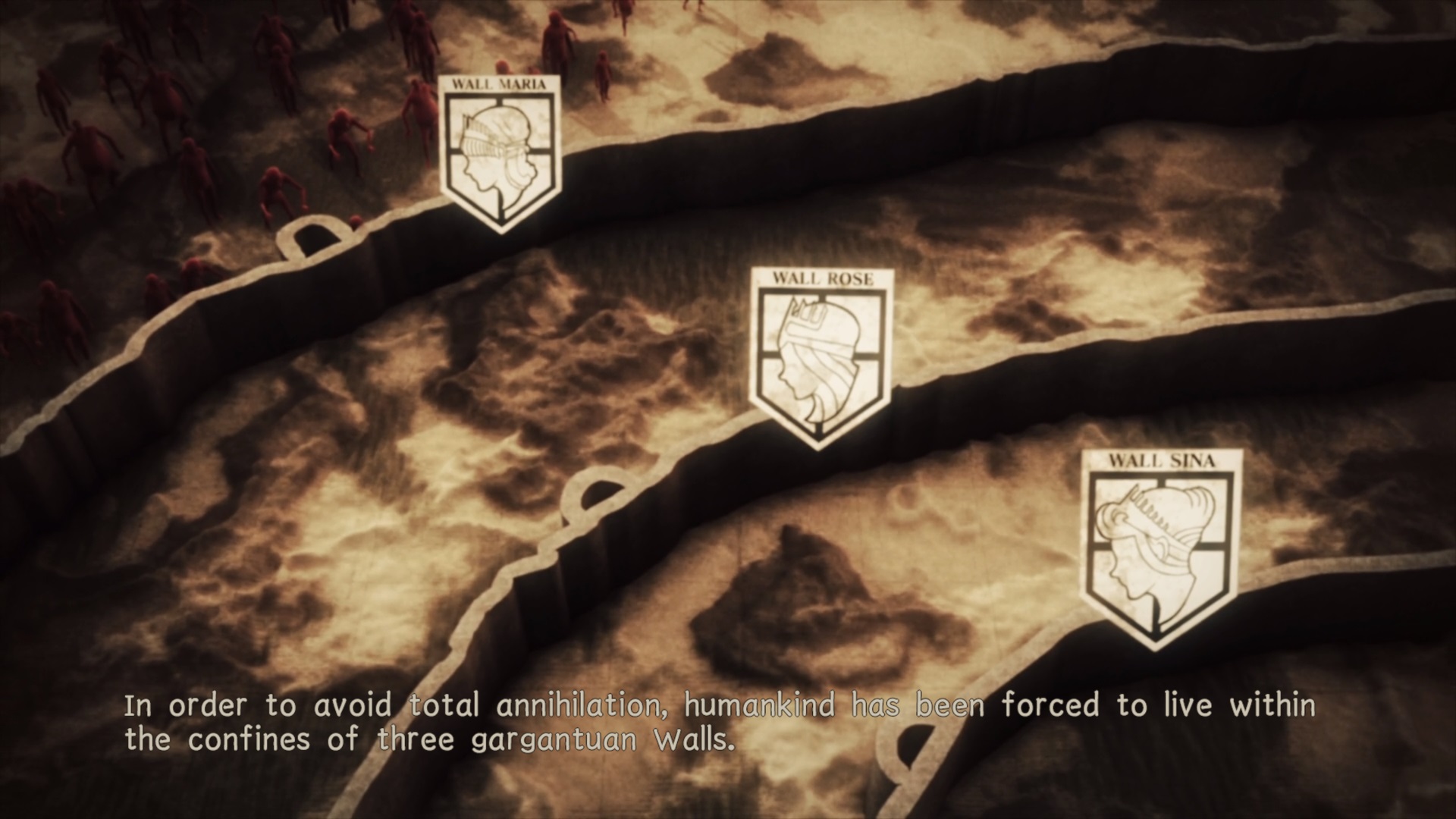 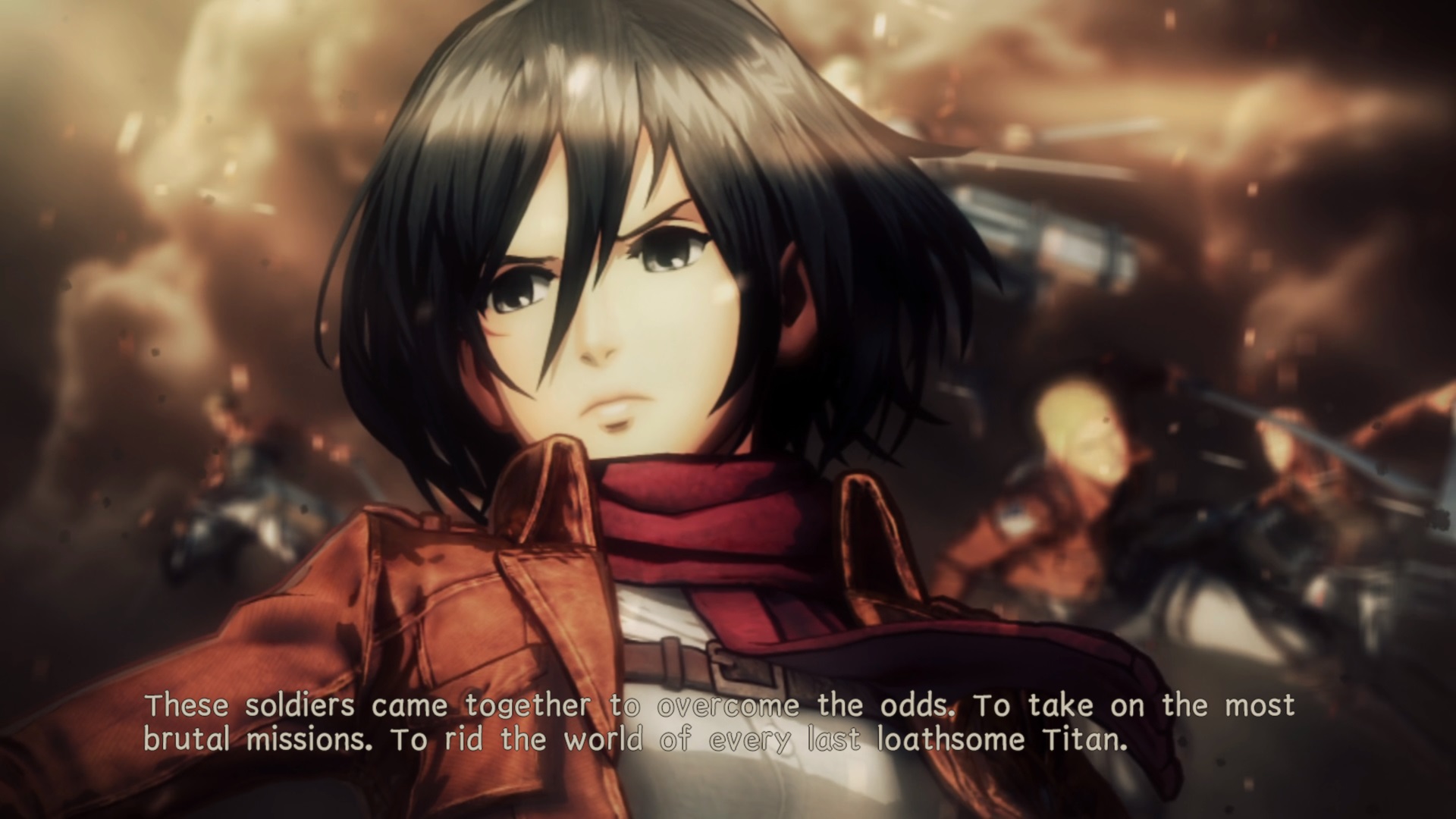 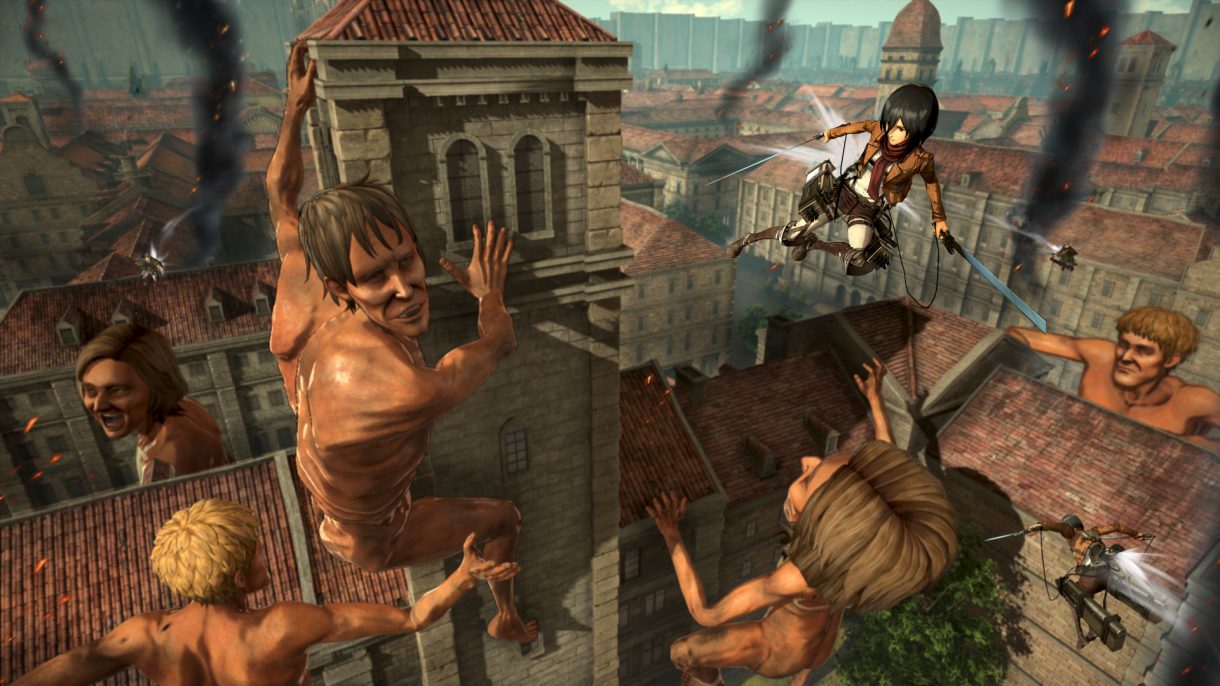 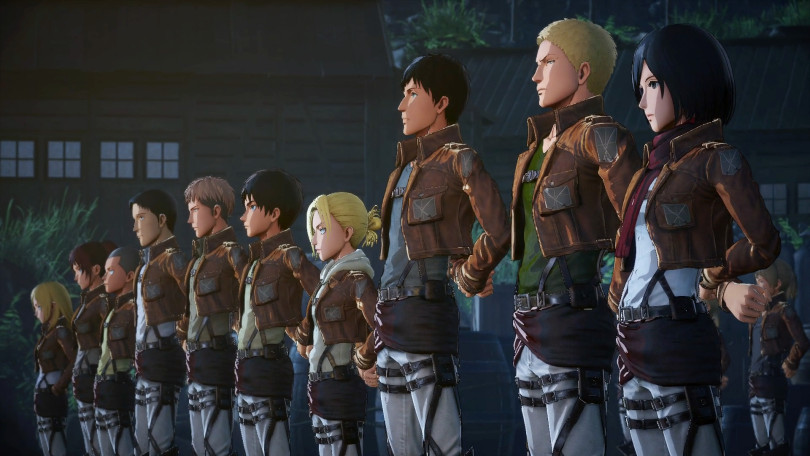 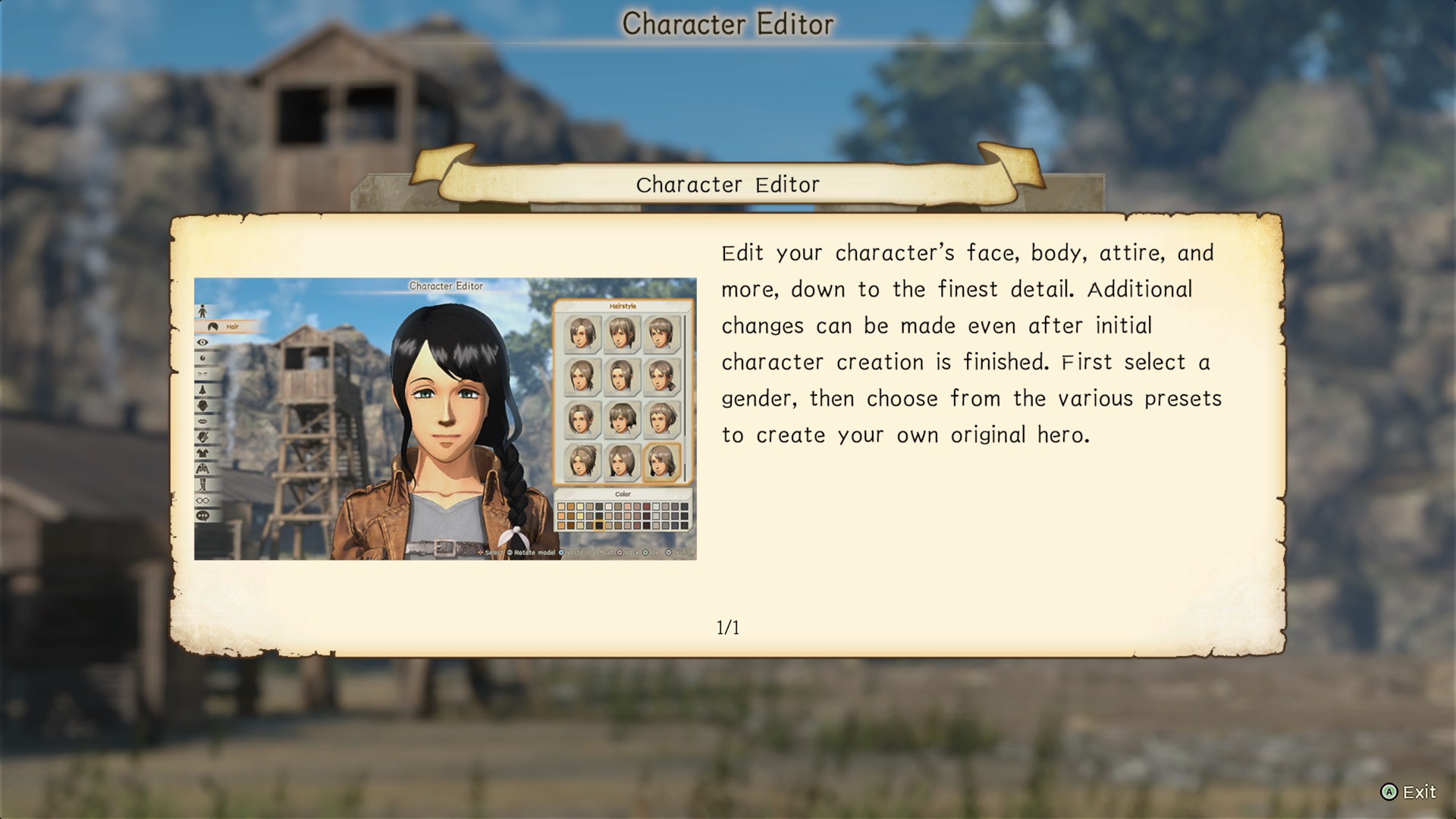 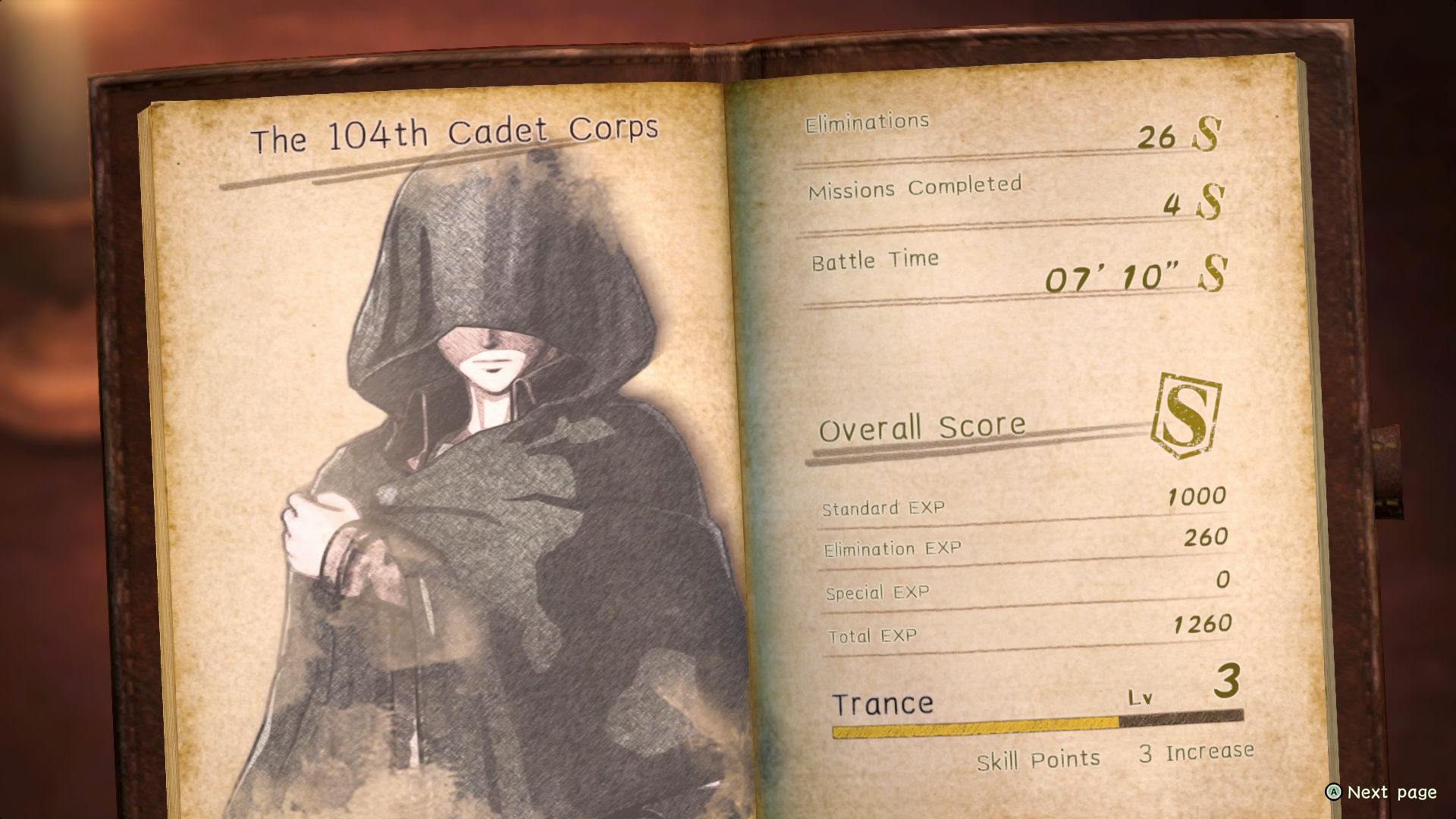 I touched on this earlier but in Attack on Titan 2 the Titans you’re facing are a very different beast compared to the first game. Titans here are far more aggressive – and you’re on the dinner menu. Bigger, meaner and hungrier than before, there are a broader variety of Titan types which means different challenges for you to deal with. Most will be the standard Titan of nightmares you’re used to but some will scuttle quickly along on all fours whilst more larger muscular ones will take more effort and the removal of limbs to kill.

Titans now also have a focus meter and once they notice you, start hoping it’s not dinner time! You’ll have your attention shift from battle to survival and I found this addition to be one I thoroughly enjoyed. You will also need to pay attention on the battlefield for other people becoming Titan snacks doing your best to save them amongst the hectic pace. Taking on Titans is hard work and one that will leave you low on supplies, as before you will be able to make bases to restock on the battlefield. However this time around you will be able to create bases for more than just restocking supplies, such as minerals and canons as well. It’s all designed to give you an edge in battle against these new and nasty Titans.

Hacking and slashing is fun but its not everything, which is why you can now capture Titans for the Titan Research Facility. Using a gun that fires off a net, you are able to capture the creepy smaller Titans without much hassle, whilst medium to large sized Titans will need a bit more effort. I found that taking off their legs first seemed to work in most cases however some special Titans like the Abnormals will require you to take off all of their limbs before you attempt netting them. But why are you doing this? Well, capturing Titans will level up your Titan Research Facility, which gives you skills that increase your damage dealt to them in combat. 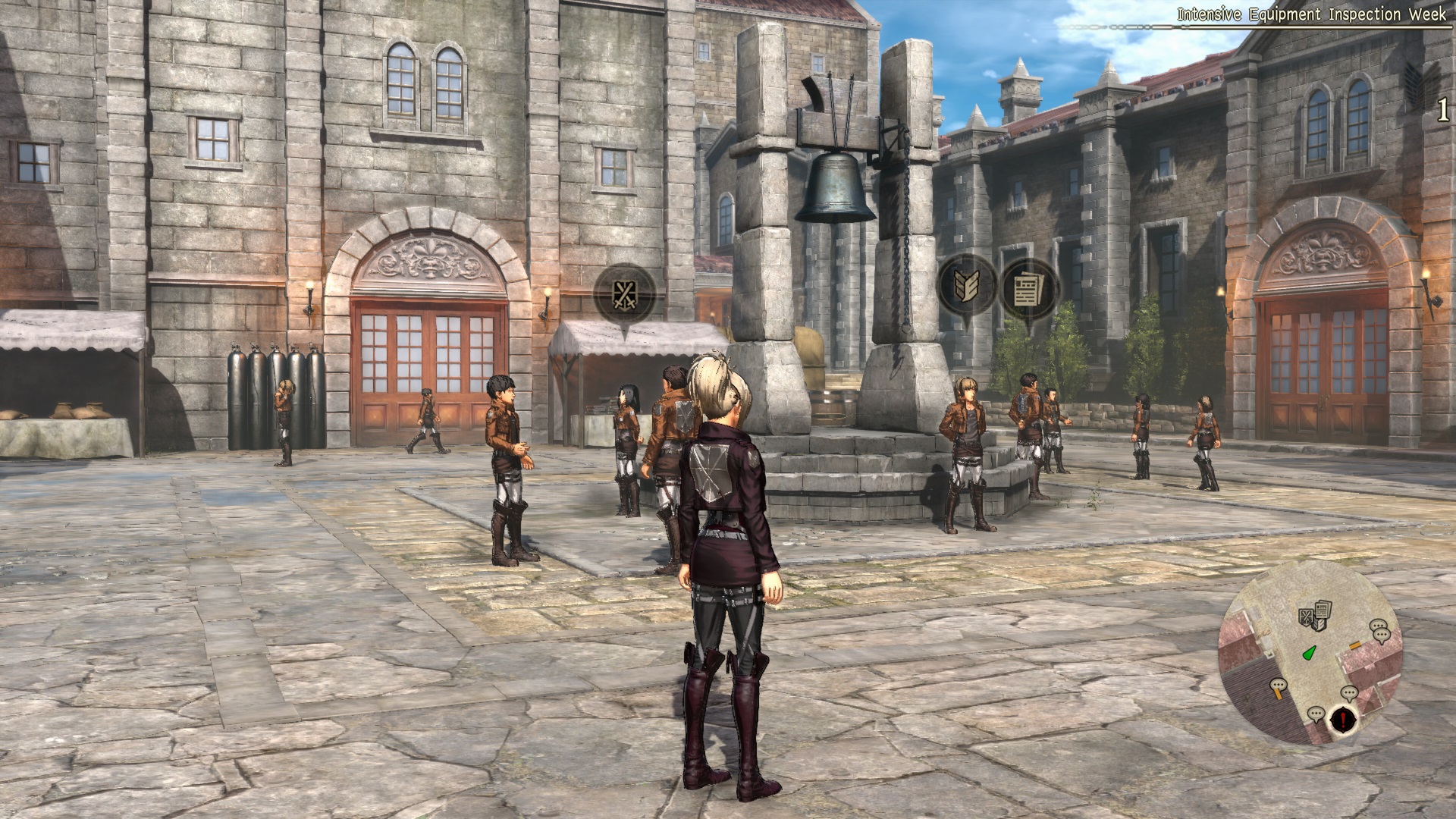 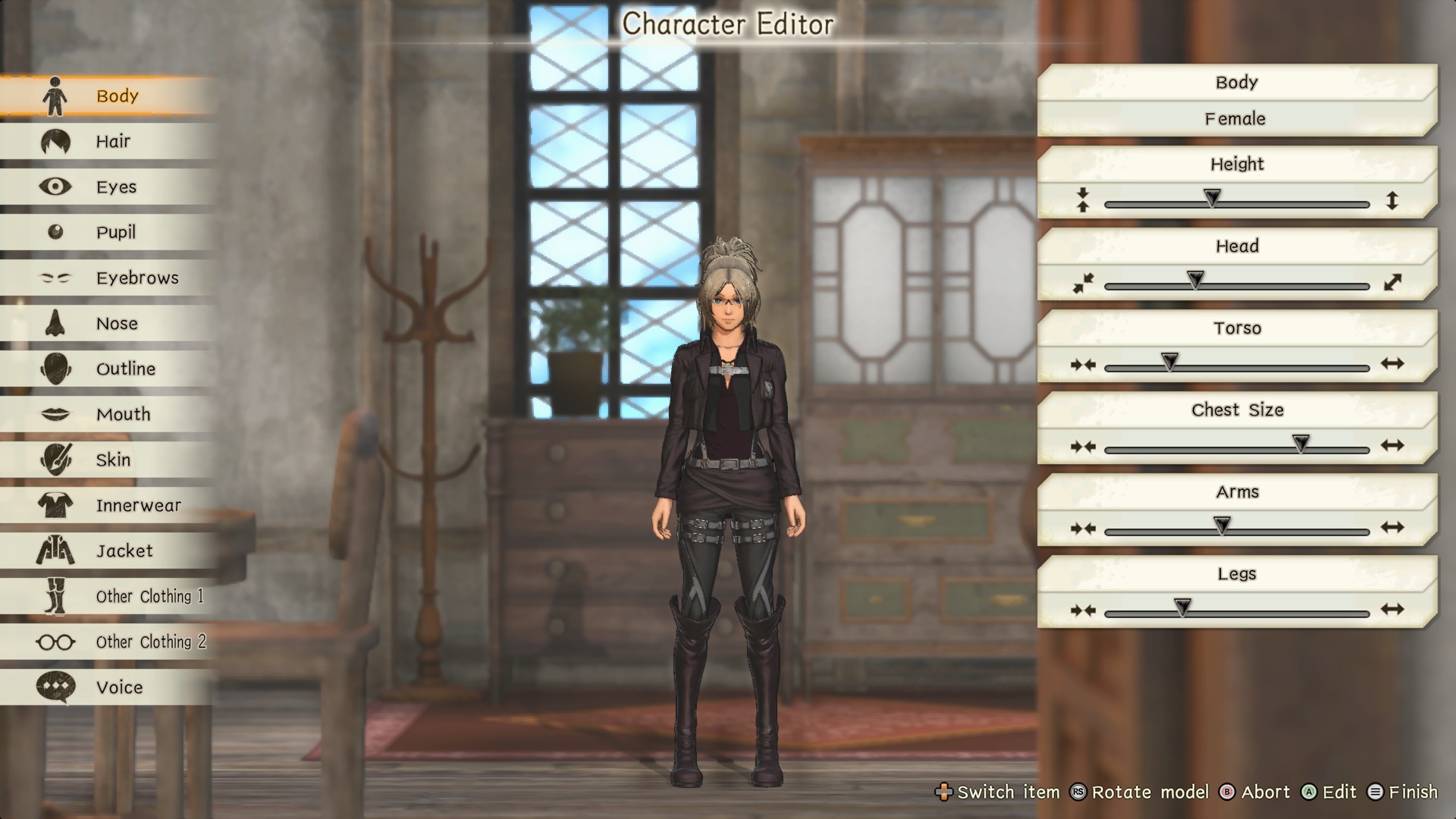 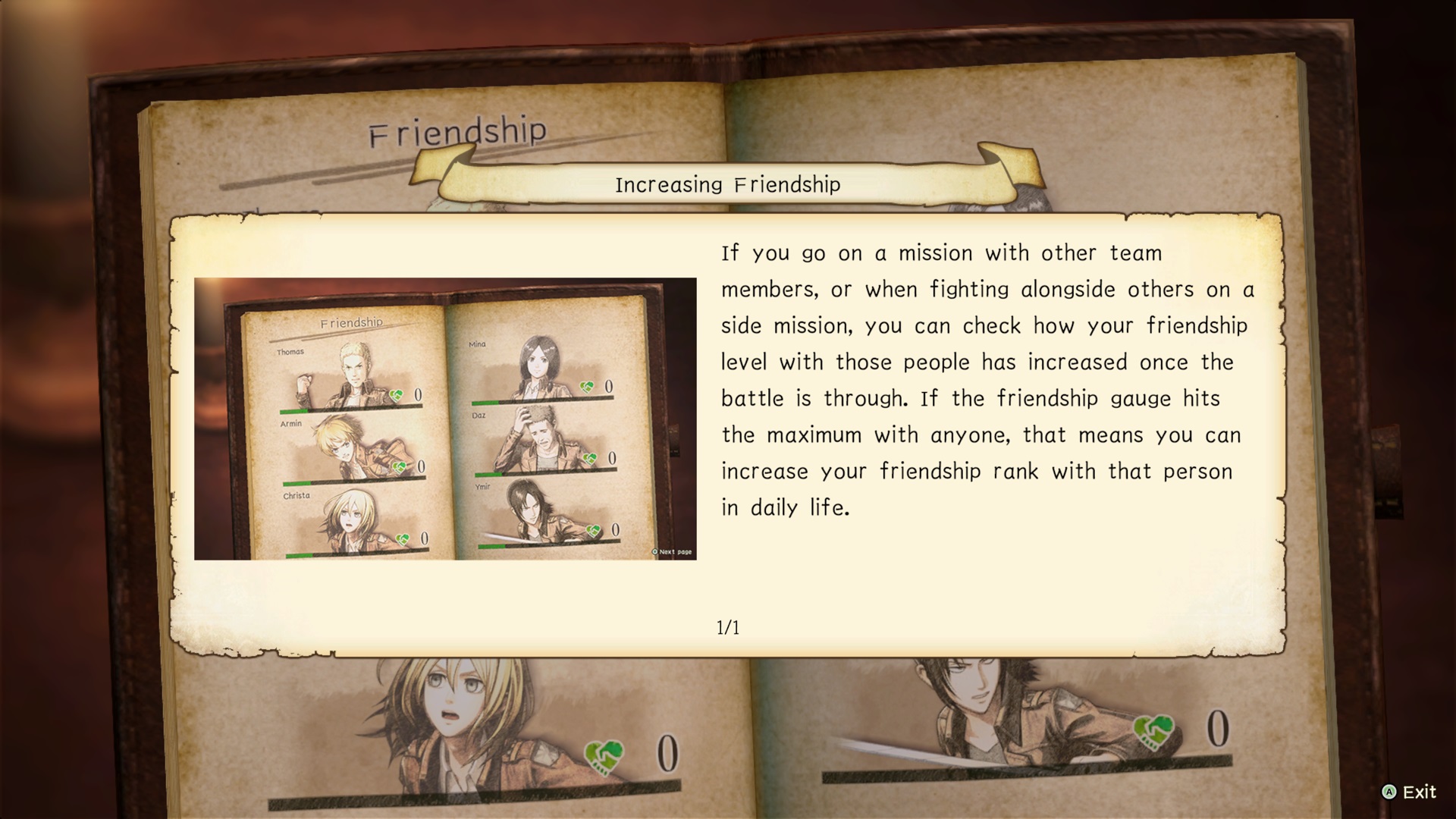 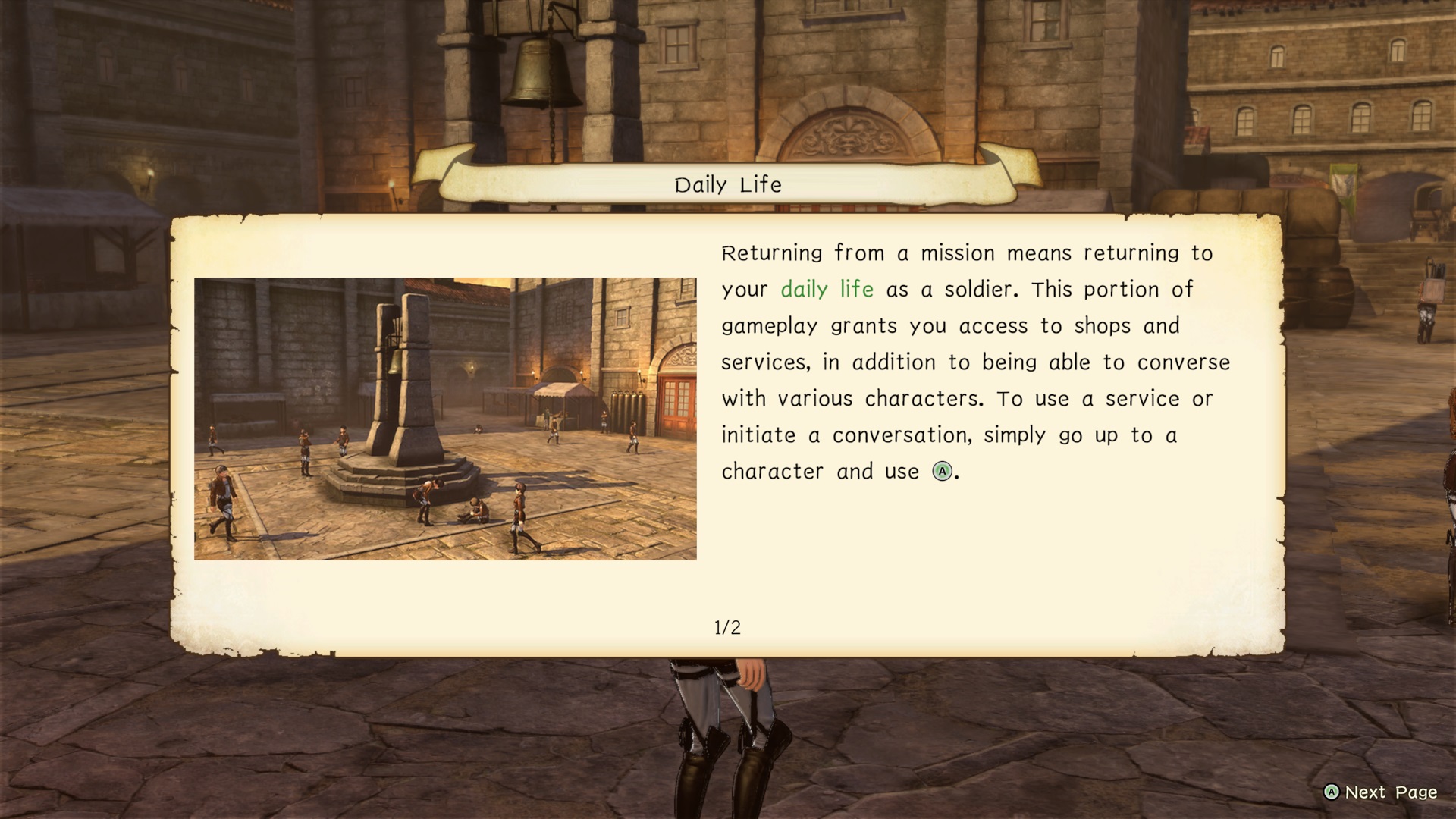 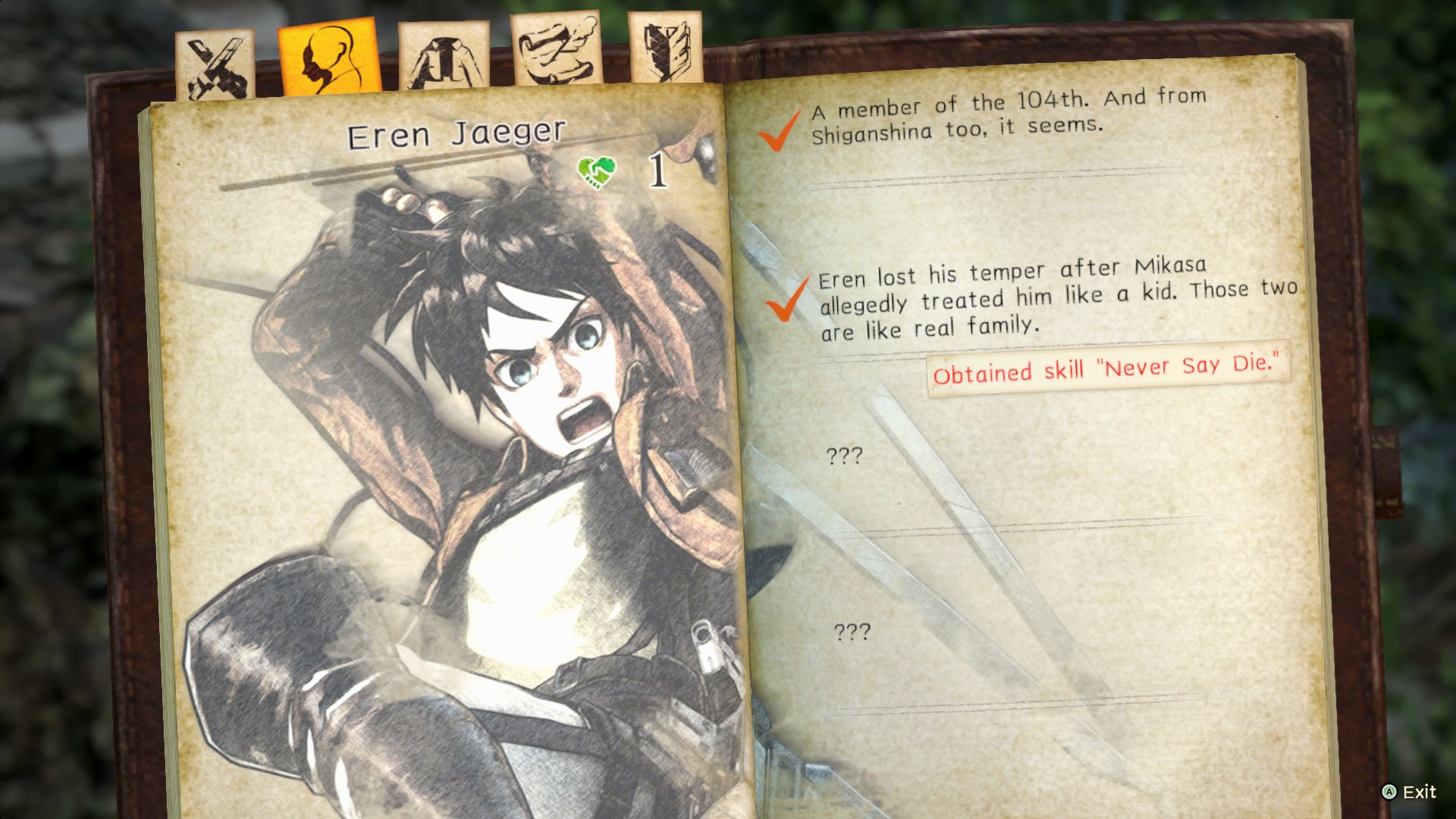 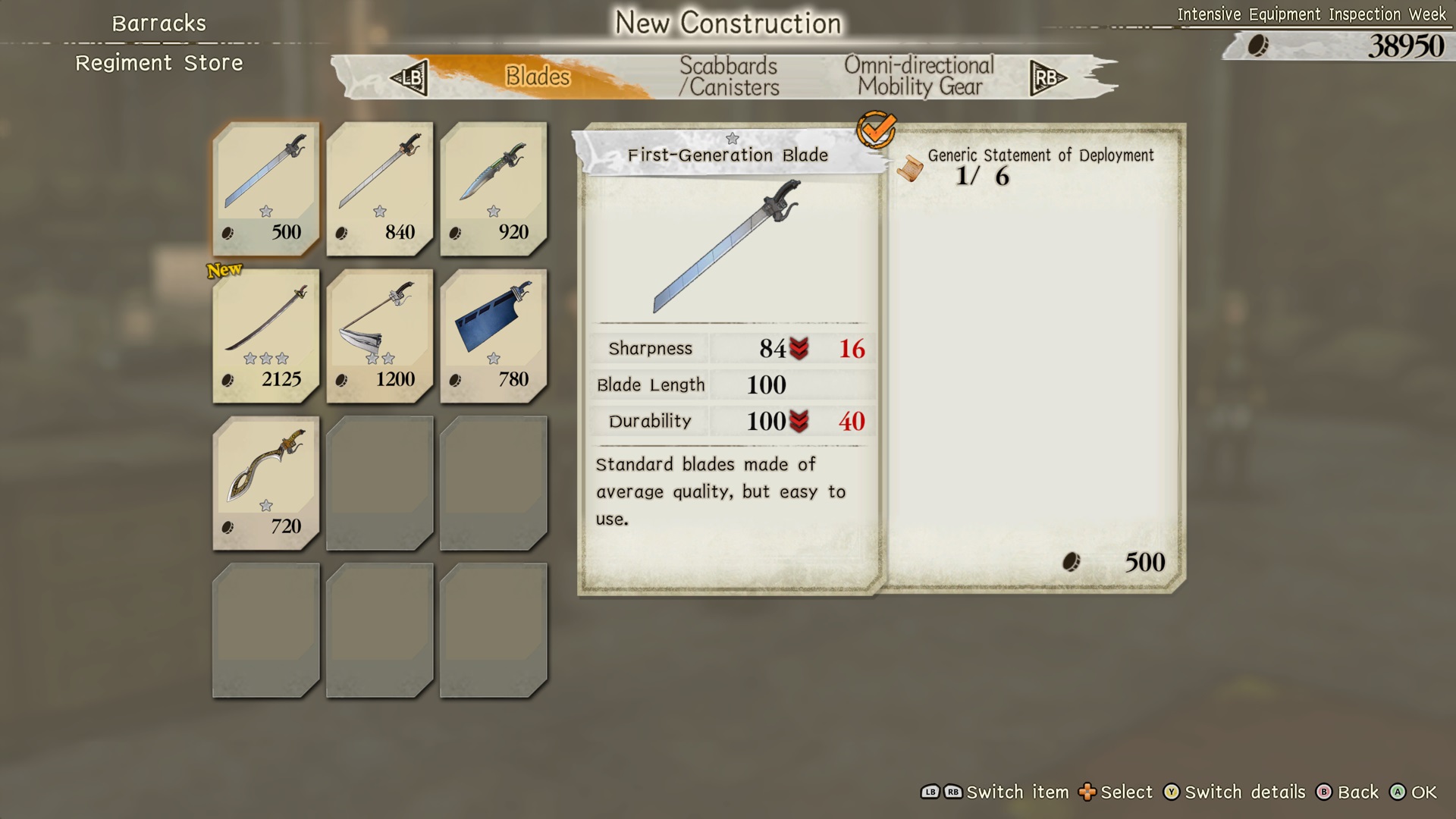 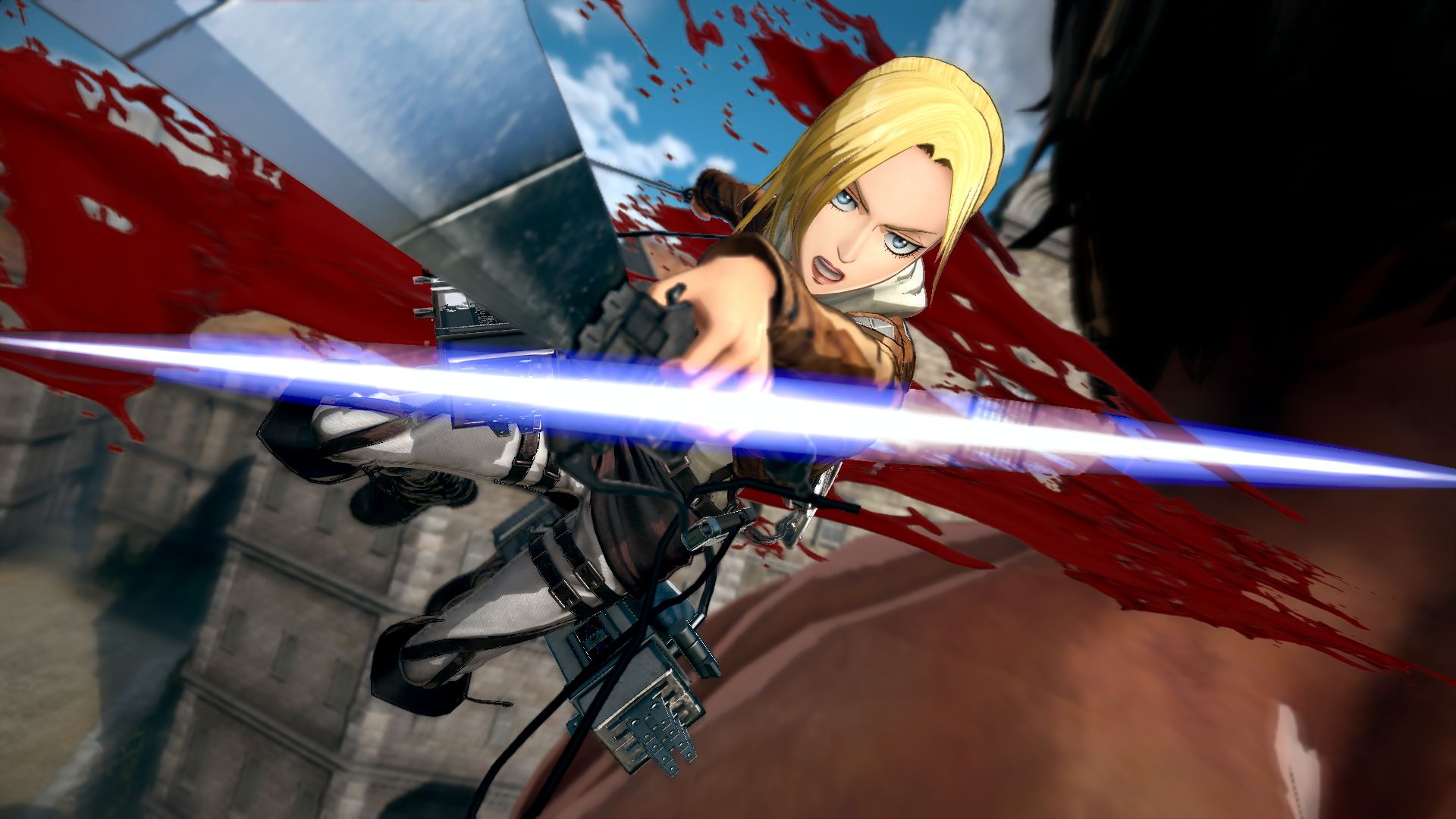 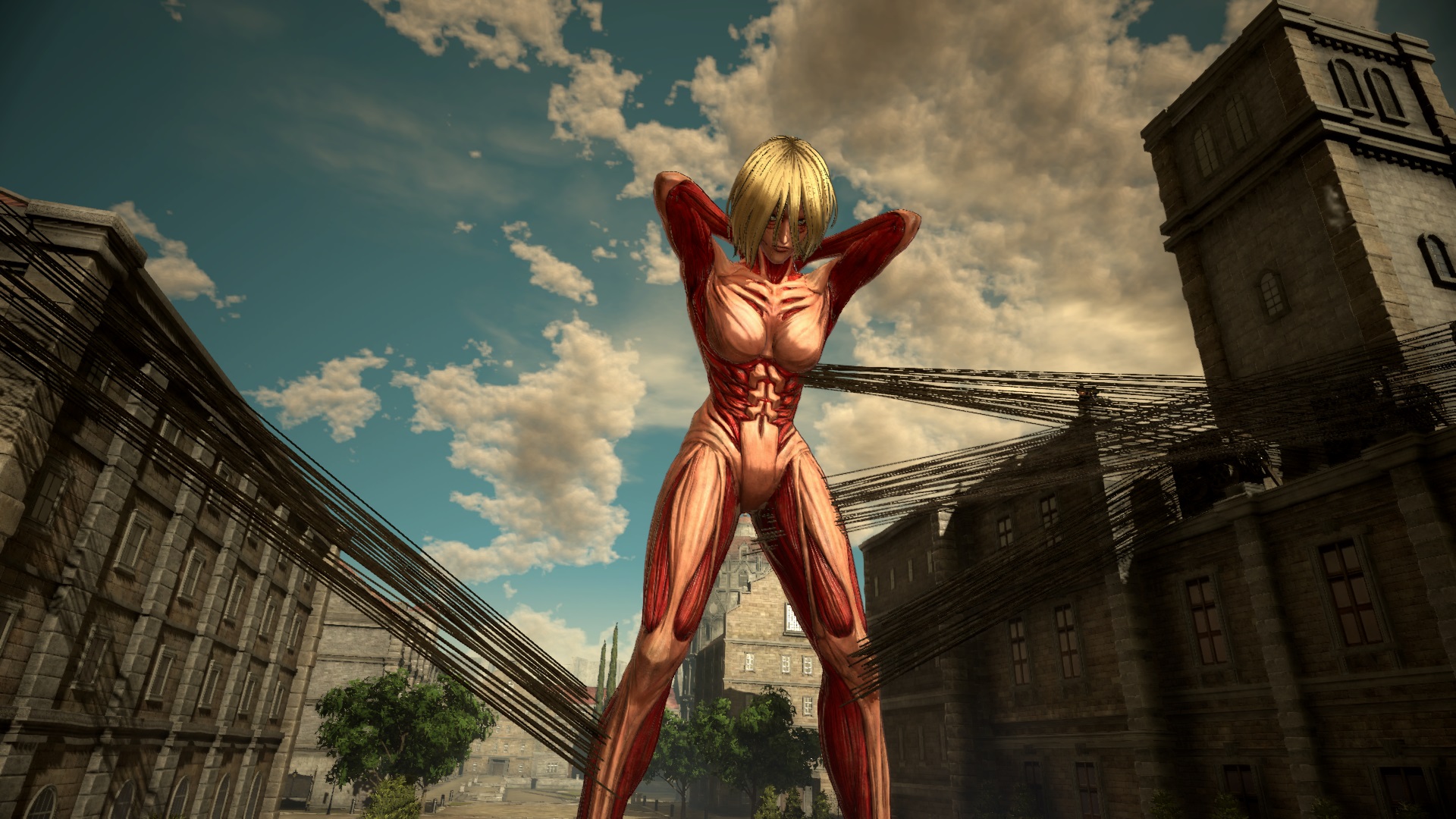 Another addition to the game is the new “Daily Life” feature. Like I mentioned earlier this is where the game takes on a bit of an RPG feel and I actually think that Attack on Titan 2 greatly benefits with its inclusion. In Daily life you feel like your custom character has more of a purpose and role to play in the AOT story which is important for this game. It also allows you converse with the various characters, building upon your friendships, access shops to upgrade your ODM Gear, train and complete different tasks and customise your character.

There is also your scout journal, this is an important feature of the game and is where the narrated story is around to some degree. It also functions both as a codex allowing you to upgrade you character and a means to keep track of the friendship levels you’ve built with the characters you interact with throughout. Friendship is important as it will unlock character specific rewards such as skill bonuses that will go a long way to helping you in battle.

Lastly, the game also features an additional play mode which allows you to play as your custom character or one of the numerous other characters which you will unlock throughout the story mode. There are extra scouting missions which can be taken on solo or with friends, a new competitive mode that pairs off teams of fighters against one another seeing who can take down more Titans, and Inferno Mode which is available only once the main story has been completed. For those curious to try it, Inferno Mode is the story mode on a crazy high difficulty so its really up to you if you want to become Titan food or not.

I thoroughly enjoyed my time spent with Attack on Titan 2. There’s definitely some replay value to be had here and it more than managed to make me feel like I always had options left. Plenty of unexpected moments of difficulty crept up on me whenever I was overwhelmed by Titans or I allowed them to gain too much ground. This made each scenario unique and instead of the relatively straightforward gameplay found in the first game I found myself utilising the many skills and tools at my disposal. There’s just something deeply intriguing about the world of Attack on Titan and I highly recommend you let yourself be drawn into it here.