BOOM! On my command my first mate fires me from our port-side cannons towards Snake Island. Sailing gracefully through the air like an albatross on the currents of the wind I take stock of the situation ahead of me and my men. We would face an army of skeletons and a jungle of snakes. Taking the head of the skeleton captain for the Order of Souls wouldn’t be easy…  As I continued my flight towards and soon over the island it soon became clear that my first mate’s aim had been far less than perfect. I took note to throw the scurvy dog into the brig when all this was over. His failings were short lived however as it had allowed me to see the two galleons docked on the opposite side of the island. Things had just gotten a lot more interesting for the crew of the mighty Swiss Cheese and I, the dread Pirate Gemini Lexx… We truly had just discovered that this is a Sea of Thieves!

Sea of Thieves has certainly come a long way since we first got a look at it back at PAX Aus 2017. But if you weren’t amongst the lucky group to play the game pre-release and you’re looking for some backstory, then here’s the quick low down. Sea of Thieves is a Shared World Adventure Game (or your basic MMO) otherwise known as a SWAG that focuses on swashbuckling pirates, but without a set storyline. It’s certainly bold, because the tough sea life is not for everyone, but if you’re daring enough then there’s a whole social world ready and waiting for you to say “Arrr”.

To summarise the essence of Sea of ​​Thieves, I’d suggest you see the game as a big sandbox paradise full of islands. You’re job is to take all the buckets, spades, and play equipment with you to make something of that sandbox. The game gives you the opportunity to complete your objectives any way you choose (if at all) and it leaves the adventuring entirely up to you. This is what makes it special.

Before you hop into the world of pirating adventure you will be given your first unique decision within the “Pirate Generator”. What sounds like a fun idea sadly has very few character base models to be found and unfortunately you’ll find at best only a few slight variations from one to the other. Add to this the fact that there’s little to no additional customisation options which means once you’re in game you’re going to see a doppelganger or two more often than not. This seems like a bit of a key failing in such a vital component of a multiplayer experience and sets a poor starting tone for Sea of Thieves. It’s a tone that persists throughout this content-sparse and BYO imagination game unfortunately.

Sea of Thieves has no miraculous storyline which may be an oversight here by developer Rare as the rinse and repeat quests can grow stale all too quickly. With no obligations and above all no time pressure I feel Sea of Thieves can quickly find itself lacking any sort of clear direction for today’s more focused gamer.

While you won’t find any core storyline in the game, what you will find is a bunch of missions or quests that you can do to earn yourself gold and pirate reputation. This can then be used to purchase the few character and ship upgrades and modifications currently available in the game. To partake in these missions you’ll need to find yourself one of the friendly ports. There you will find the three factions in the game otherwise known as trading companies. These companies are the Gold Hoarders, Order Of Souls, and the Merchant Alliance. There you can pick up three types of quests.

All of them have a different backstory to them, a different look and feel, and offer up different quests. Completing these builds up your reputation and opens additional rewards within each faction. But in the end you will always find yourself either travelling to an island to kill skeletons, find chickens and pigs, or looking at your map to find an island you know you’ve already visited only to follow some ridiculously simple treasure map to dig up some chest that’s always in the same places on the same islands every time. 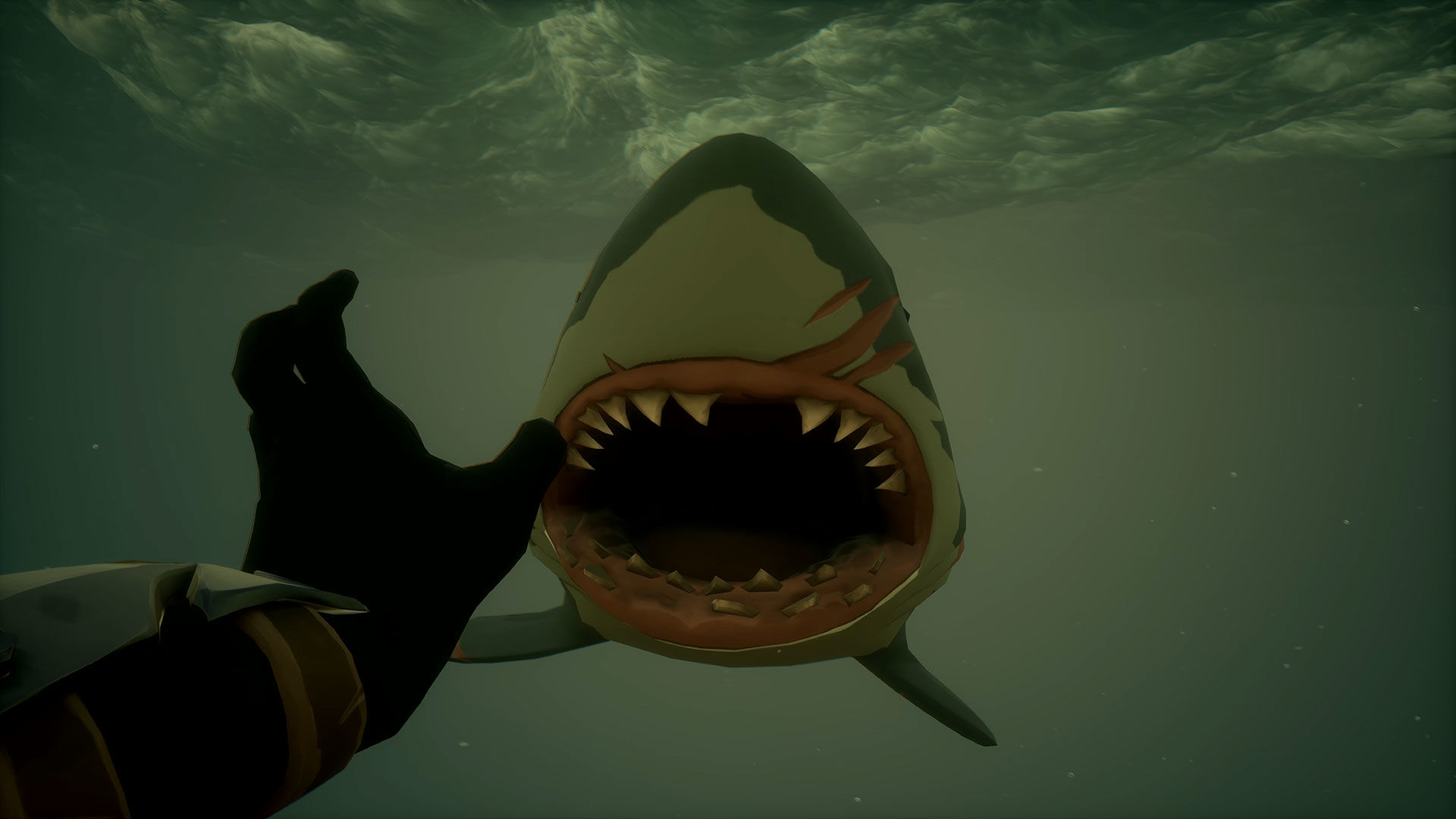 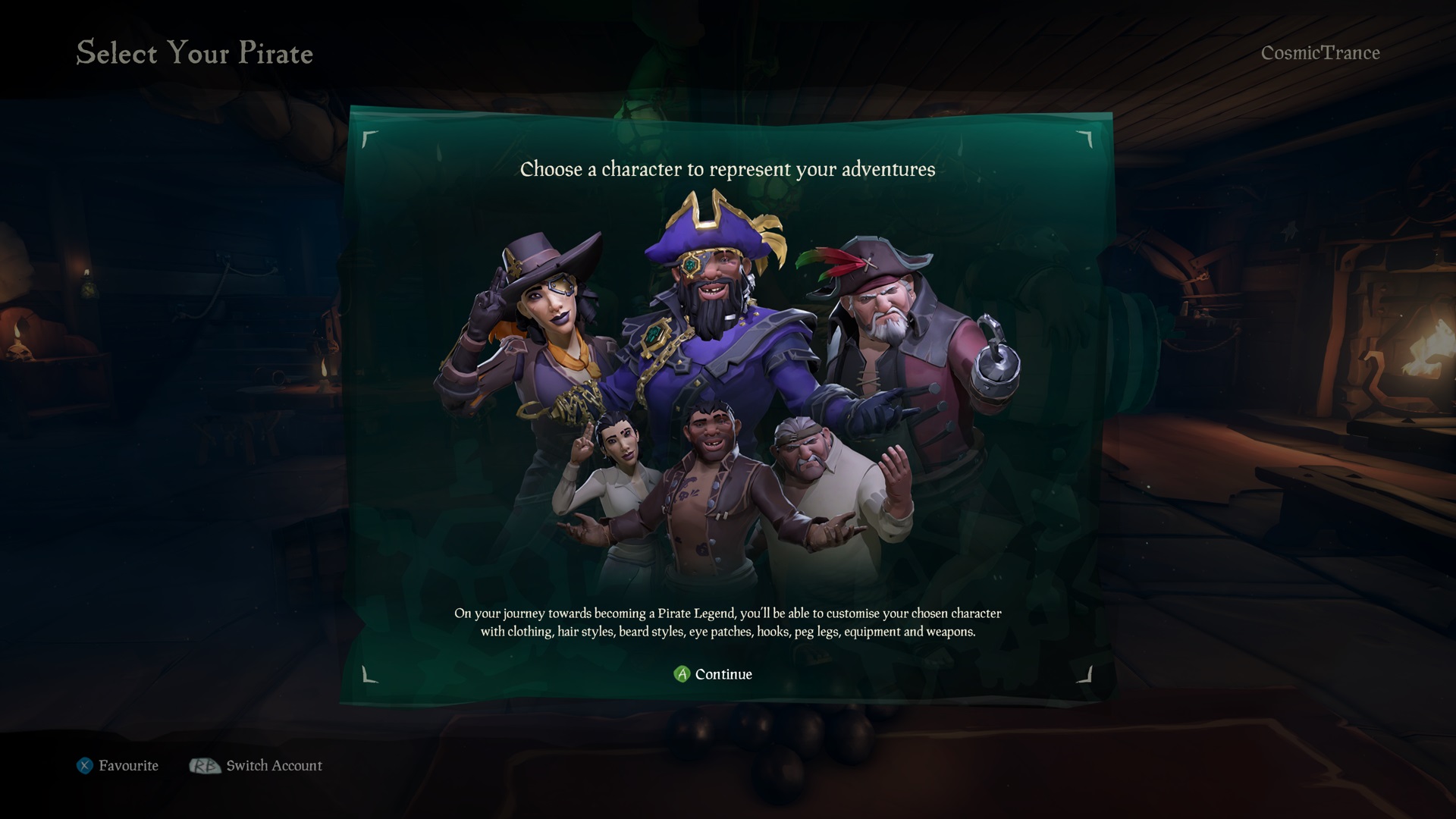 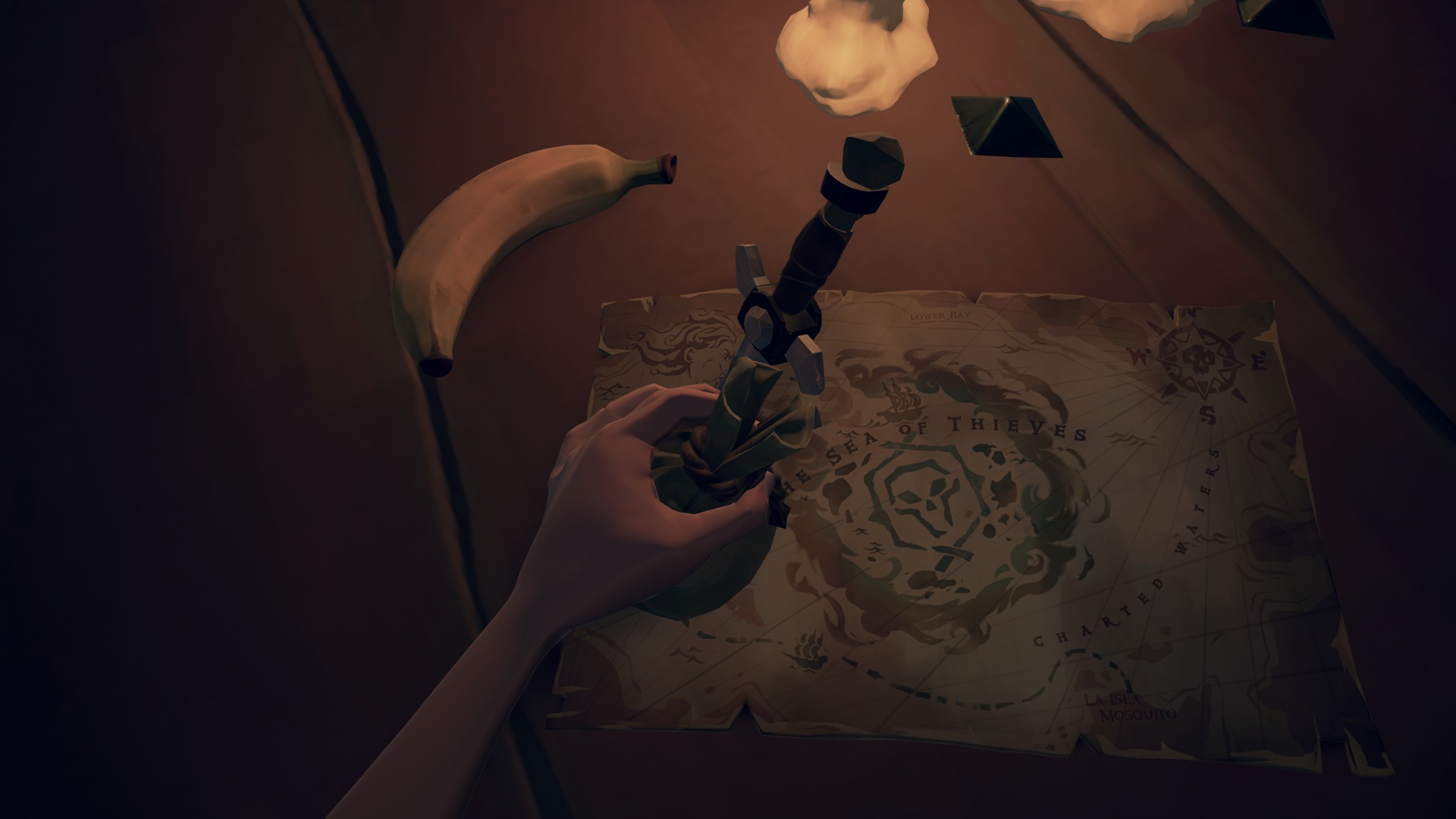 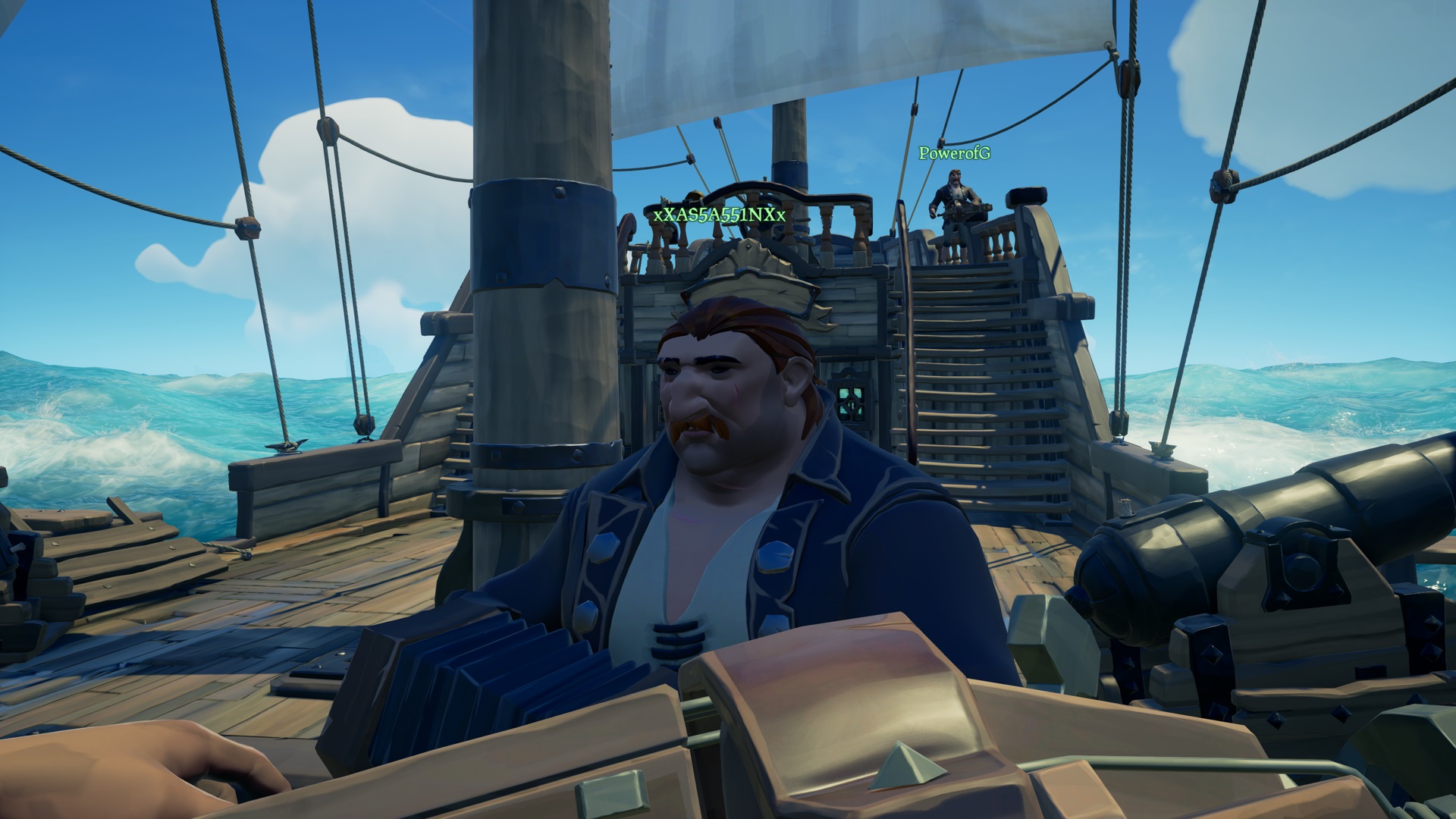 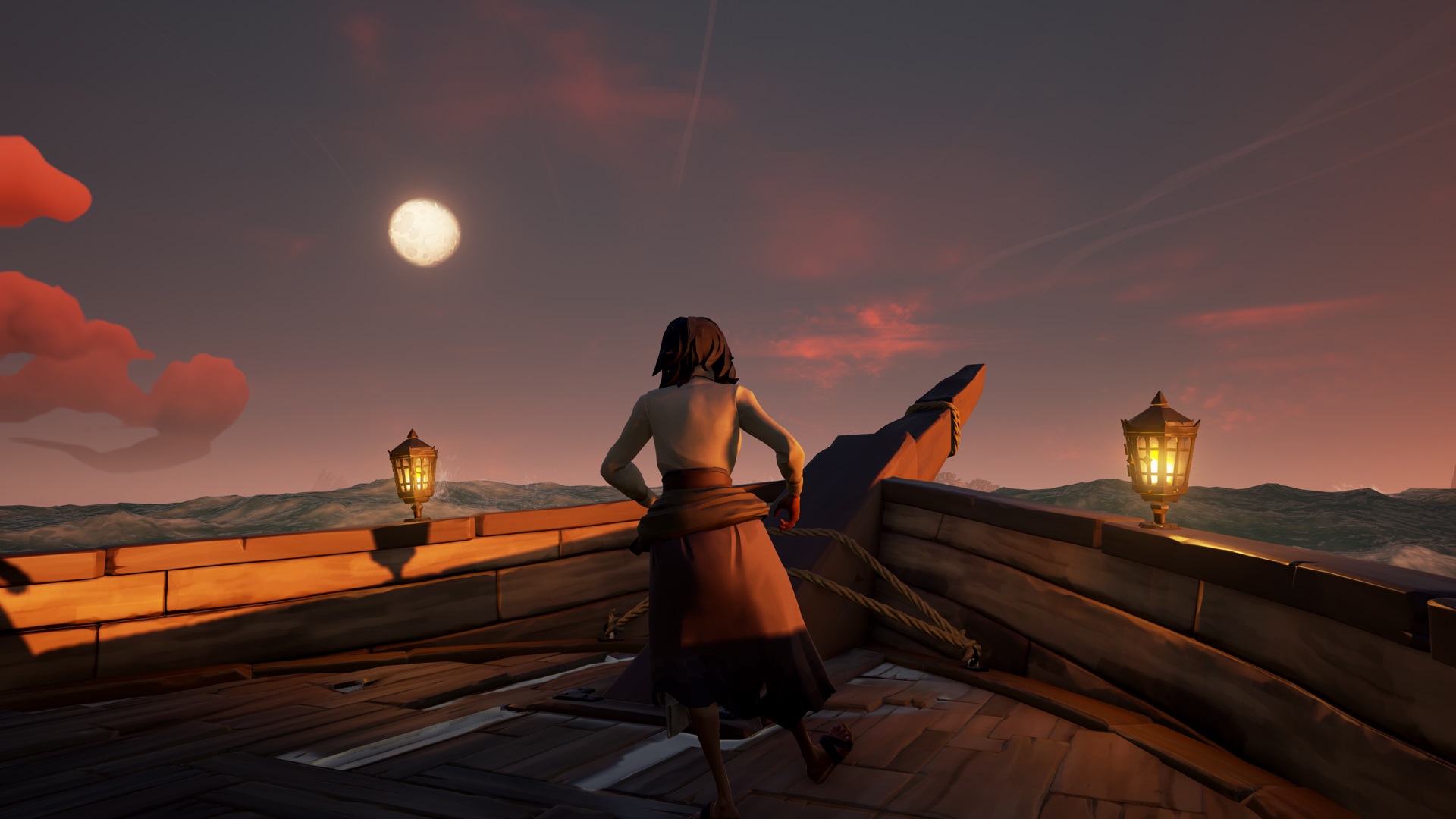 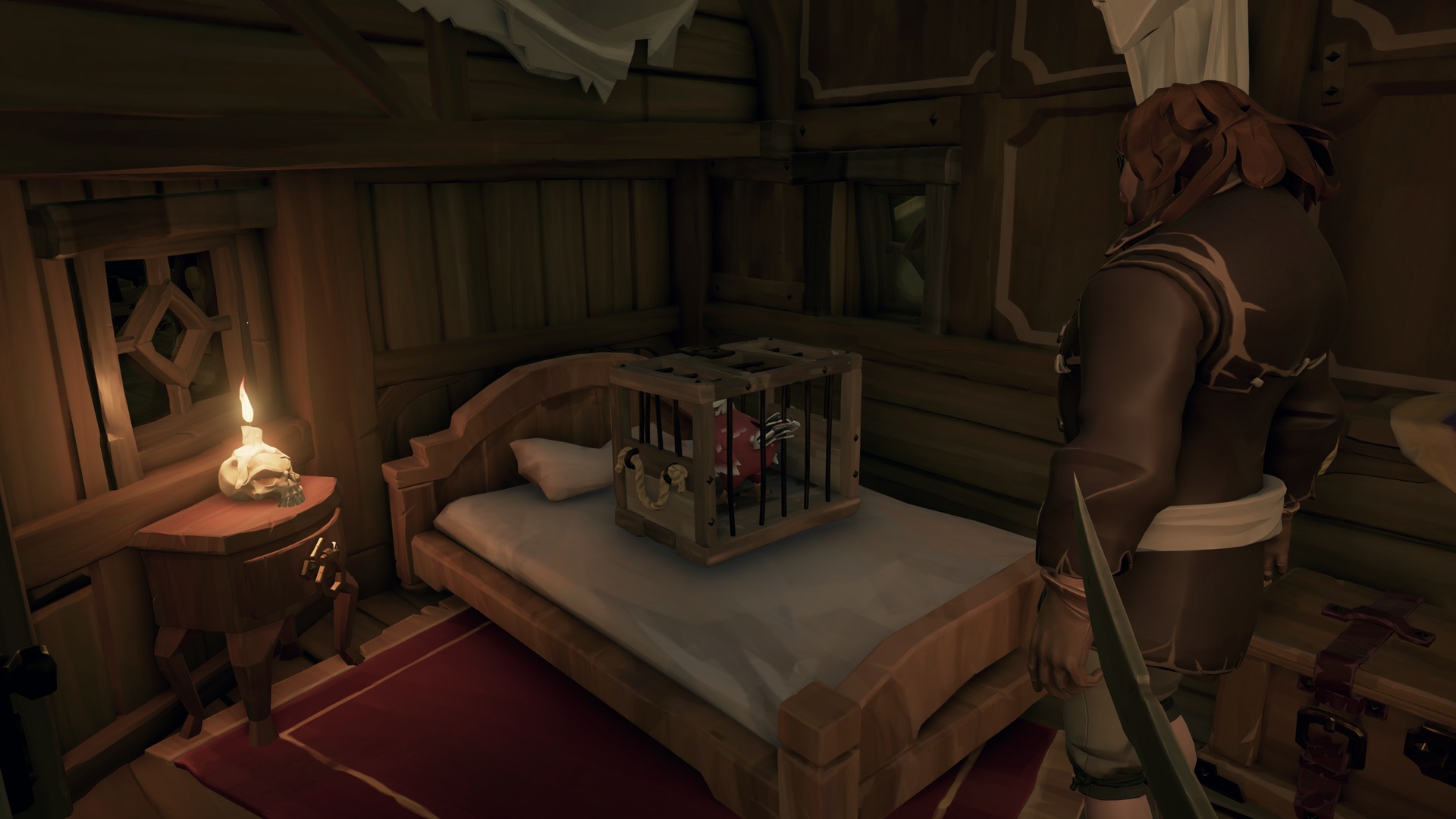 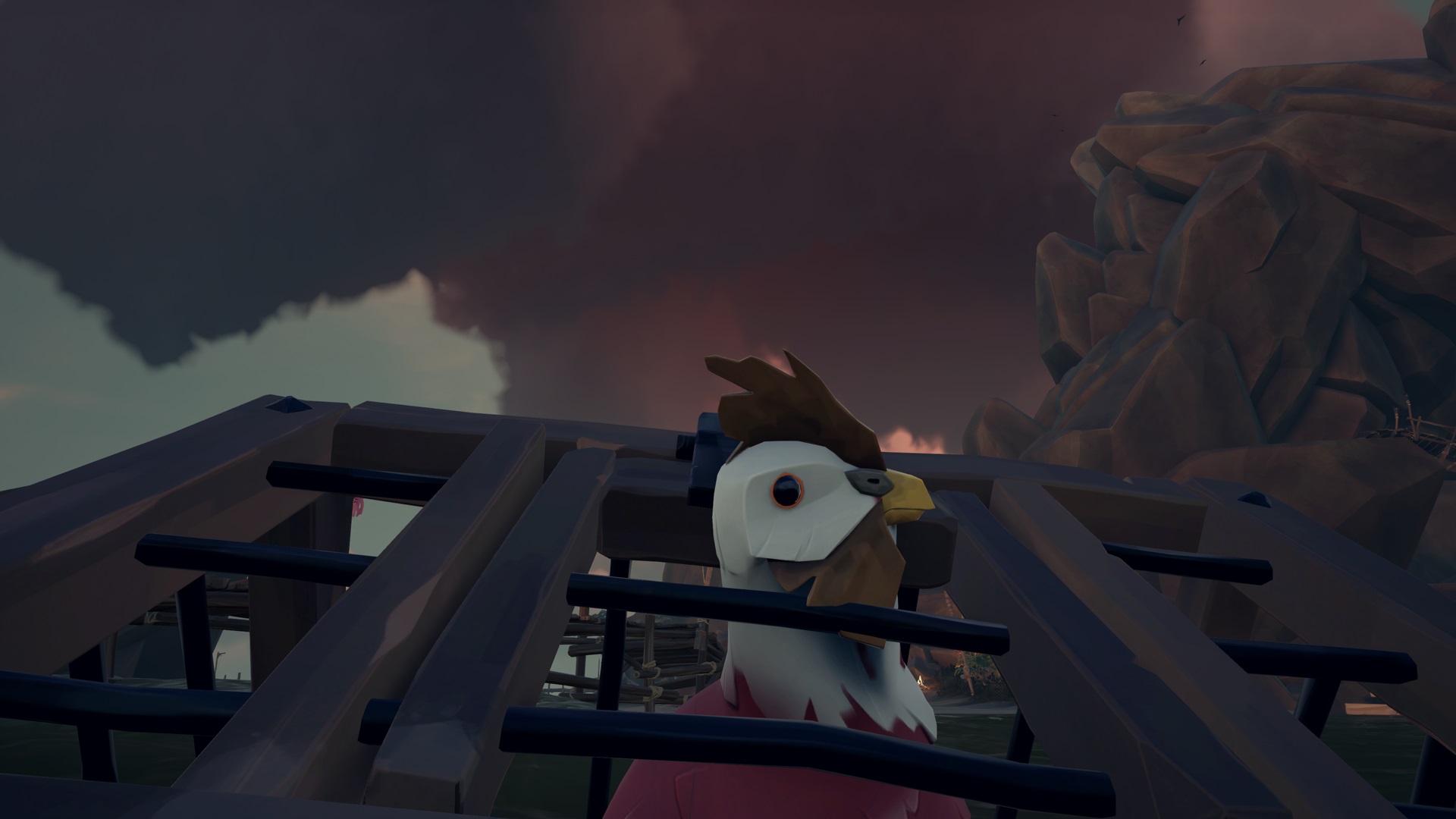 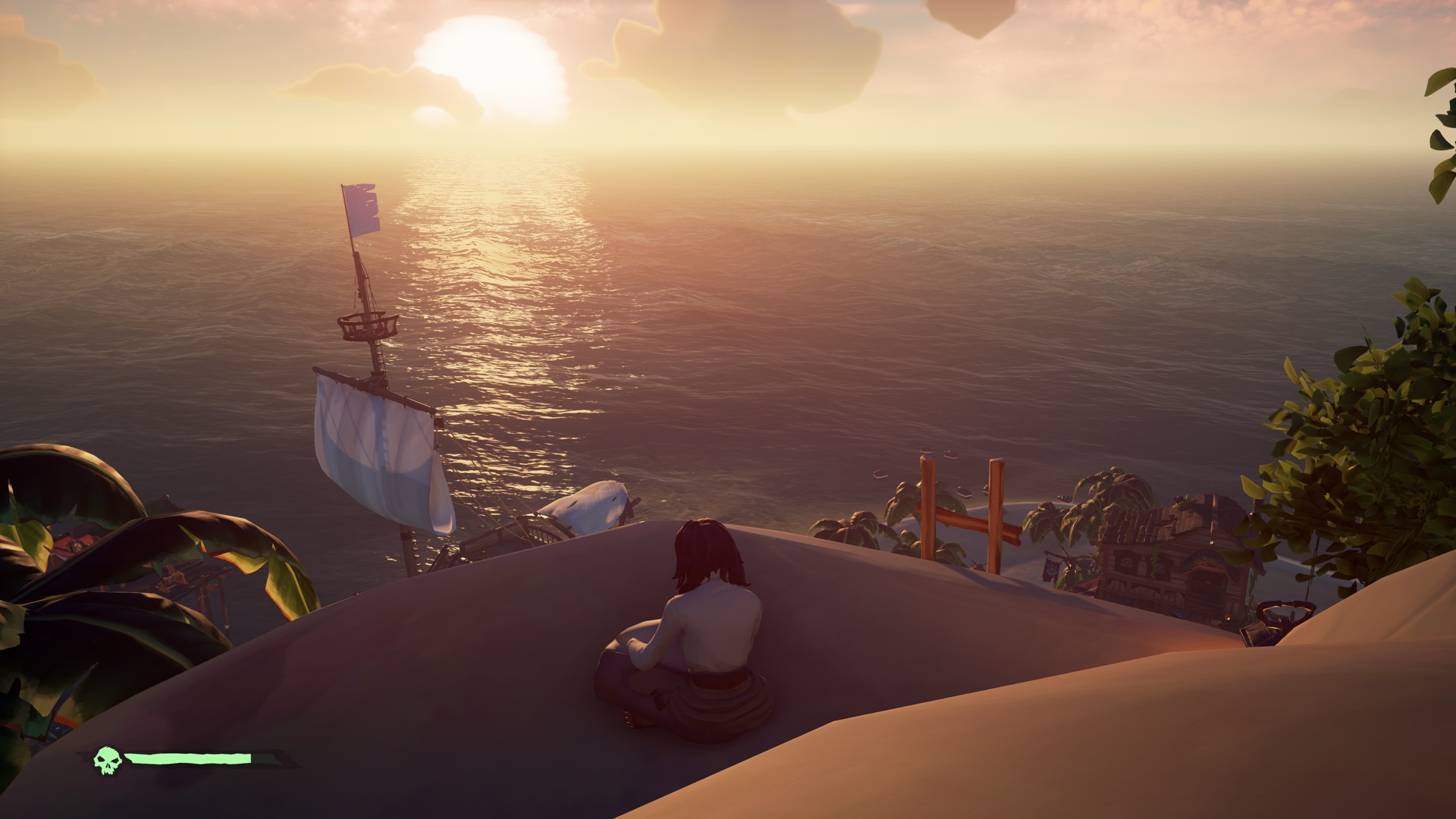 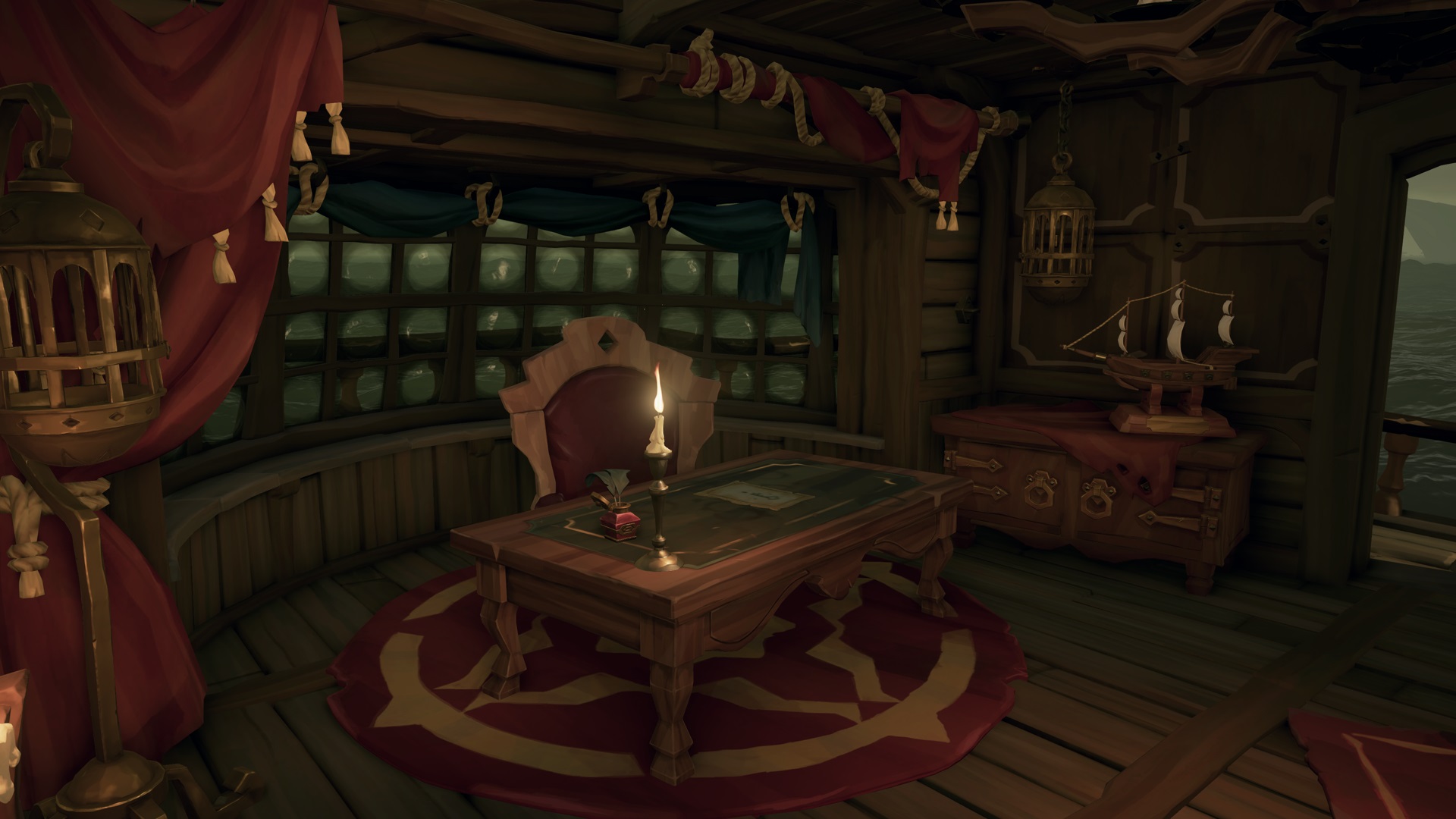 A slight saving grace is that in addition to the regular missions you pick up from the trading companies which yield more and more as you go up in levels, there are also random activities that can be picked up. A washed-up message in a bottle including treasure maps or a skeleton fort that can be attacked to get a large amount of loot will occur occasionally. Unfortunately these activities are still few and far between and suffer from the same lack of variation.

Behind the wheel of the mighty Swiss Cheese I could hear my crew playing me a sea shanty to keep spirits high as we sailed into the eye of the oncoming storm… She was a beauty, the seas were rough for sure but my quarters were full with loot to be sold at port and it was too late to turn back now the storm was upon us. Suddenly the compass began to swirl and an ominous roar echoed forth from the swirling sea. The call went out on the ship and my first mate rang the bell… KRAKEN!

The Kraken is something that should be a formidable and a scary moment when first encountered in the game, and for the most part it is…

That’s right up until you realise it’s simply a bunch of slow moving tentacles that are easily deflected and escaped if needed. But the Kraken encounter much like the rest of Sea of Thieves is made much better by a good crew and a little imagination.

I won’t lie – I had a tremendous amount of fun during most of my play time with Sea of Thieves. I found a crew, we role-played to some degree, and using our imaginations to make the most of every aspect of the game we lived our best pirate lives. We may have been the worst pirates known to man but we lived a pirate’s life nonetheless. The snippets you’ve read throughout this review are first hand accounts of that play session and of the fun that can be had with the right crew and a little imagination.

Sadly that snippet, as fun as it sounds, can be offset by my first experience in the game which was a much lonelier, frustrating and repetitive one. I feel it’s important to get this clear that in Sea of Thieves teamwork and companionship is everything. The game does offer a single player component for those looking to go it alone, but I would highly advise against being a lone pirate. Without a crew to bounce off of and make your own fun with, the game is painful, repetitive, shallow, and one that most definitely shows its shortcomings.

I was soon approaching my destination when a galleon appeared on the bow of my sloop, she was a large vessel and had the wind in her sails, it was clear she had spotted me and was on the hunt, I needed to run. On me in a matter of minutes, I was being fired upon. My little sloop was hit and I was sinking… On my own I feared for my life, I had but one option, aim for the island and make a run for land or I would be going down with my ship. With the wind in my sails and my ship sinking fast I took the opportunity to make for land whilst the galleon turned around.

Making repairs as I sailed and bailing out water from my sinking ship I had a cunning plan, set the ship to sail on and abandon it for land in hopes to fool them. I jumped overboard hoping for the best as cannon balls whisked past me, damn it they saw me! Quickly I jumped into the island’s few scattered bushes hopping for cover from the onslaught of cannon fire. Eventually my ship was sunk and the galleon sailed on, either believing me to be dead or no longer worth the effort. Either way I was thankful and very much over this pirates life…

For the most part Sea of Thieves is a game of endless freedoms, there is nothing more fun than finding the right group of people and just messing around. Grabbing an instrument to play some pirate tunes or perhaps drink yourself silly till the world begins to spin after completing a long journey. It’s really up to you to decide what kind of pirate you’ll be but in the end the best part is the new friends you’ll make along the way. I think this is exactly what Sea of Thieves is about essentially and what the team at Rare were hoping for when they came up with the concept. But it’s precisely this freedom to allow players to create their own stories and legends within the game that is both its saving grace and its downfall.

In the end though, hoist the anchor and let the wind catch in the sails… mutiny will not be tolerated! Become the pirate captain of legends or just become the worst pirate ever like I did, either way prepare to set sail if you dare on the Sea of ​​Thieves!