I don’t think I remember a time before Warhammer. Starting life as a table top strategy game with an array of miniatures that you could purchase at any of the million Games Workshops found in literally every shopping centre. Making the move to digital the Warhammer franchise has tackled sports, turn based strategy, role-playing, card games and with the first instalment of Vermintide cooperative FPM, first person melee. While it had a solid fan following the first game didn’t blow up the internet, which is why I was pleasantly shocked at the announcement of Warhammer: Vermintide 2 in late 2017.

Warhammer: Vermintide 2 is set in a fantasy landscape in a time called The End Times. As you can tell from this cherry title things are going swimmingly for the kingdom as they literally countdown to their own apocalypse. Like this is lore folks, the world is going to end. To make matters worse the Skaven, an awful bipedal rat race, don’t plan on sitting on the backbench during the armageddon.

Enter the Heroes of Ubersreik, a quintet as diverse as they come. Following from the first game you find yourself captured by the Skaven and due to be sacrificed to help charge the Skittergate, a portal to transport their new allies the Rotbloods. Thankfully an explosion following a failed attempt to stabilise the gate frees the heroes and they make their escape with the help of their allies to  a hidden keep in the mountains.

It is from this derelict abode that you and three companions will set off on missions to disrupt the armies of your rodent enemies and their new playmates. Out in the field you’ll pick from one of the five Heroes of Ubersreik. Markus a sturdy warrior, Bardin the skilled dwarf, Sienna the blunt pyromancer, Viktor a no nonsense witch hunter and Kerllian a wood elf with an attitude as sharp as her aim. With five heroes you’ll need to leave one character behind as four of you leap into the fray applying your varied skill sets in the battlefield. Whether that be with AI or other players is up to you, however you can usually count on other players in the heat of the moment more than bots. 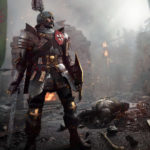 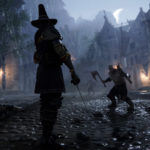 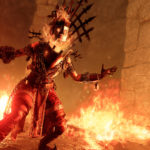 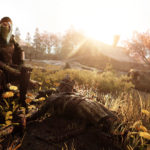 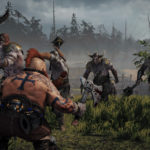 Completing missions with your specific character will let you level them up and unlock more skills making you more and more powerful as well as collecting an array of loot. Loot is important as each hero will have an arsenal specific to them that will play completely differently meaning that each hero has a weapon that will work for you. Warhammer: Vermintide 2 has completely reworked its loot and levelling up system from the original to be much more rewarding. Figuring out the hero and weapon set for you is key because gosh, levels are tough.

“Many times I shouted to Checkpoint’s own Elliot that we needed to get out of the open, head for higher ground to defend ourselves. Blood pumping we frantically fought to stay back to back so we could get the other on their feet should they fall.”

Levels will randomly drop enemies, with one or two having a higher chance of appearing in the same spot each time. These range from run of the mill infantry up to special units that will do things like violently leap on you, drag you away from your team, or summon a mystical tornado, great when you’re in a choke point. You’ll need to coordinate with your teammates to cut these special units off at the pass or desperately shout for help when you’ve been cornered by one of them.

Warhammer: Vermintide 2 ups the stress though by sounding the horns of oncoming enemies at random intervals. You’ll have a moment to spin on your heel to see a pack of Skaven or Rotbloods flooding over the scenery as they rush to introduce you to the pointy ends of their swords. Many times I shouted to Checkpoint’s own Elliot that we needed to get out of the open, head for higher ground to defend ourselves. Blood pumping we frantically fought to stay back to back so we could get the other on their feet should they fall. Unfortunately getting overwhelmed is inevitable and you’ll either get your team mate up or let them be dragged off to rescue further into the level.

All of this is helped by some great level design that moves you forward naturally while still leaving lots of nooks and crannies for you to look around and discover secrets, some of which will give you an advantage in the long run but at a price you may not be willing to pay. Unlike the original this time the world opens up to a great variety of locations, each with a wonderful amount of detail and attention. One moment you’re storming a city under siege, the next you’re hiking through the woods looking for elven ruins or stalking through desolate farms where the stink of death still lingers. Characters are easily recognisable as are the varieties of enemies and only once did I come across a slightly wonky animation. The work the art team have put into this is wonderful and matches perfectly with the soundtrack. The musical score does a great job of setting the scene and getting you ready for a big fight and while the voice acting from your characters can be a little much it is endearing after a while and you’ll enjoy the back and forth of this rag tag team of rat exterminators.

Probably the most impressive thing I found with Warhammer: Vermintide 2 was the connection and the load times. Only once did I have a problem with lag and getting booted and it happened at the very beginning of the level so it was obvious the connection wasn’t great from the beginning. Lag was unnoticeable on my connection while my kinder half played Overwatch on the same connection just one room over, that is impressive because lag would make or break a game that requires such precise timing to block, dodge and parry the advancing vermin.

This is made even crazier after the recent announcement that the game is not running off dedicated servers but will be by the end of May. Along with this is the first DLC which brings more maps as well as mod support that is being developed alongside the modding community. All of this points to dedication from Fatshark to keep the game feeling fresh and fun for players. While currently only available on PC the game is due for a later release on PS4 and Xbox One just like the original and a beta for those should be available in the coming months.

Warhammer: Vermintide 2 is frantic fun. It has taken the strong style of the original which was clearly inspired by Left 4 Dead and expanded on it in just the right way. Nothing feels unnecessary and every player feels like they are helping. These kinds of cooperative games create a fantastic camaraderie between friends and even strangers as the going gets tough. Don’t sleep on this indie hit like you might have the first.The best recommendation I can give this game is that when I’m not playing it, I’m thinking about it—a lot.