Extinction had so much potential. The concept of bouncing swiftly from tree to tree, scaling walls with intense speed and using your grappling hook to swing your way into a decapitating blow on a 150 foot ogre trying to destroy a city you’re desperate to protect sounds so good on paper. It sounds like it’s heavily inspired by some source material such as Attack on Titan and Shadow of the Colossus with its focus on taking down such gigantic beasts, but if done properly could have resulted in a violent hack ‘n’ slashing good time. It’s a shame then that the core gameplay is watered down into a repetitive, reductive mission structure that wears its welcome after only a couple of hours playtime.

The core concept, as I said, is strong. When you first start Extinction, it’s enjoyable learning how to take down the giant ogres (called Ravenii), by slicing their limbs one at a time, knocking them down (a bit at least), scaling their hulking bodies and chopping off their heads with violent abandon. It’s satisfying, and different varieties of Ravenii have different types of armor with some more penetrable than others. As you learn strategic ways to tackle these differences, it’s fun for the first few times until you realise there’s not much more else to it.

There are side missions involved killing the smaller monsters on ground level, but the combos amount to just one button press for the most part, making it feel incredibly button-mashy and more of an annoyance when they get in the way more than anything else. Rescuing civilians is also irritating, as they die quickly and require you to clear the smaller pleb monsters in the area before you can save them. These side missions of killing minions and saving innocents aren’t exactly avoidable either, as you’ll need the power you acquire from doing them (along with lopping off limbs) to charge up a killing blow on the Ravenii.

Every mission, then, despite modifiers that are randomly added into the mix half the time, has a habit of feeling incredibly samey. Save some people, kill some little annoying monsters, hack off limbs, decapitate. Then rinse and repeat. Sometimes there are multiple Ravenii attacking at once, and if they manage to destroy the town before you take them out, you fail the mission and have to do the whole mission again. Cue the image of Meryl Streep from The Devil Wears Prada sarcastically saying: “Groundbreaking.” 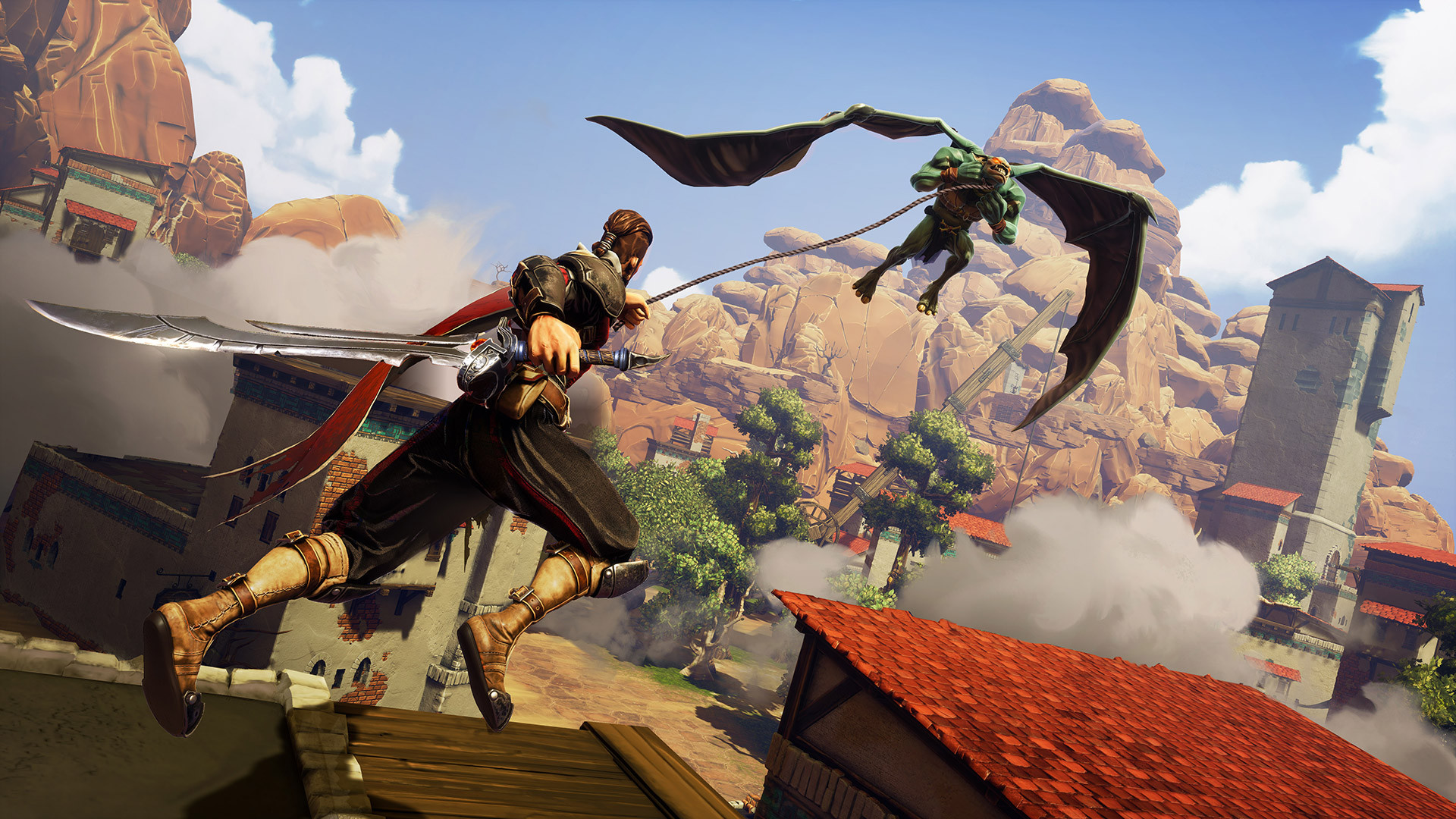 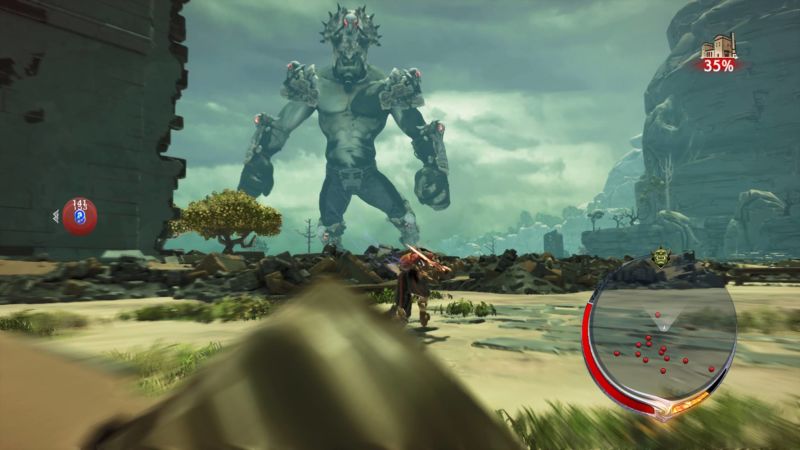 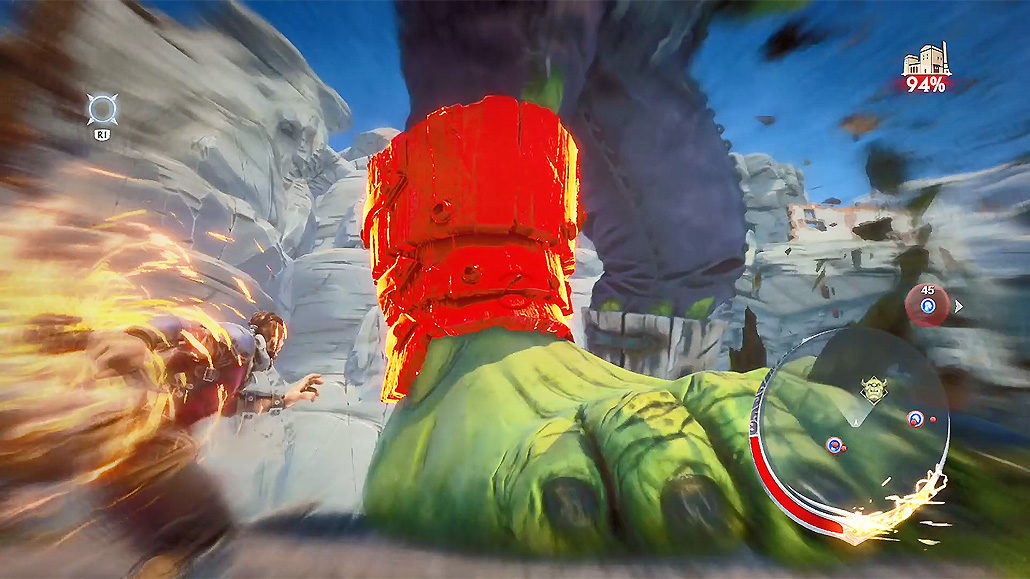 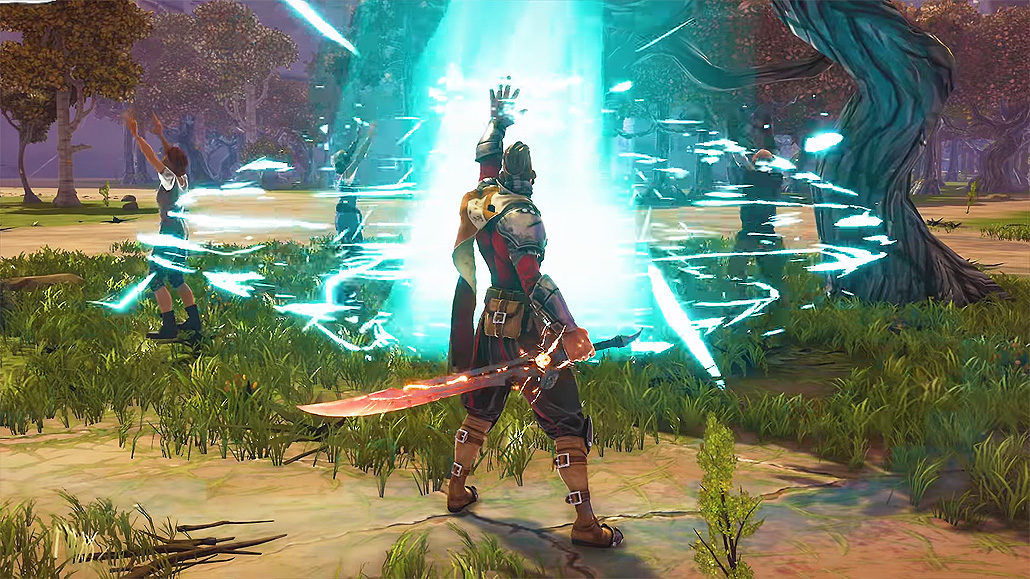 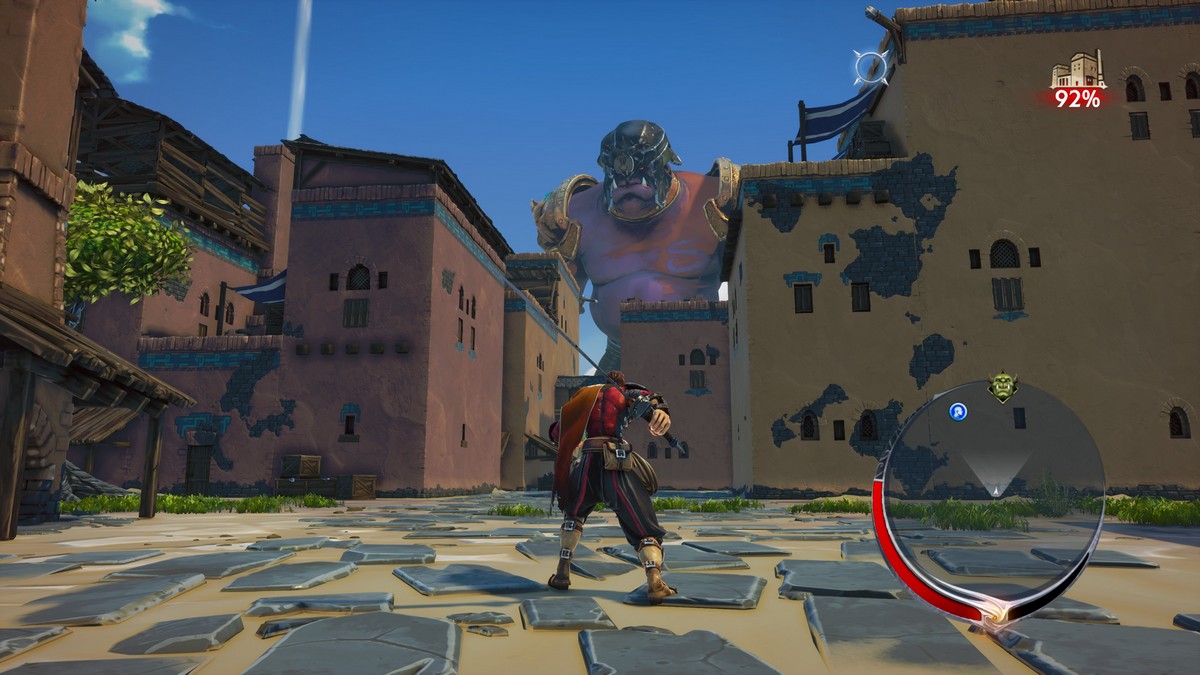 Flying around at breakneck speed trying to kill Ravenii is made all the more frustrating and difficult by a camera that often feels like it can’t keep up with you. Trying to position it just right to make sure you can slice off each limb with precision is finicky and doesn’t feel natural, and the grappling hook often doesn’t cooperate and go where you want it to. I lost track of the number of times I was aiming to climb a creature, only to be flung in the opposite direction as my hook auto-targeted a nearby tree.

More frustrating is that Ravenii are big and powerful enough to kill you with just one hit. Swatting you like an annoying bug. The camera doesn’t allow for enough vision around you to see when they are taking a proper swipe at you half the time, and Extinction doesn’t do a good enough job to alert you that a hit is coming, or provide you an option to counter. You just get squished and respawn promptly to try it again. At first I thought a quick respawn was pointless and not too problematic, but as the maps get bigger and enemies higher in volume, you start to respawn from death further and further away, forcing you to spend 20-30 seconds running back to your objective.

“I lost count of the number of times I ran back, only to be instantly flattened and sent back to do it all over again.”

So while you’re running back to the fight, the city is being destroyed piece by piece. I lost count of the number of times I ran back as quickly as possible, only to be instantly flattened and sent back to do it all over again. One hit kills have never been a favourite of mine in any context, and Extinction didn’t help change my point of view. When you do manage to chain together a variety of attacks successfully and take down a Ravenii piece by piece, it flows nicely and feels good, but these moments are not consistent.

Production values just aren’t up to scratch when compared with other games at the same price-point, and it will leave you wanting more quite quickly. Cut-scenes are rare, and even then they are animated differently in a stop motion style. Most of the story is told through dialogue between the characters that scrolls slowly through a (too small) text box on screen, while voice actors read it out. The decent performances here balance the boring presentation, but it still makes you want to skip most of it.

Variety is also lacking across the board. Ravenii might escalate and have different types of armour, but they all wind up feeling the same. Levels are procedurally generated, but they don’t look or feel particularly unique anyway. Even the other goals and objectives that are randomised are all essentially the same. Taking down these giants should feel like a thrilling, exciting accomplishment, but after only a short while the initial excitement fades, leaving a repetitive slog that is not as strong as its initial concept.

Extinction is one great idea, executed adequately, surrounded by a bunch of frustrating and repetitive distractions. I’d say that it’s style over substance in a sense, as the combat looks and feels slick during its initial moments, with the slicing and dicing of Ravenii a solid exclamation point to a hard fought mission. But the overall presentation of the weak story, the hollow combat and annoying decisions are almost self-sabotaging for Extinction, stopping it from being successful at every turn. Fun for a couple of hours at most, this could be worth grabbing from the bargain bin next month.