Far Cry 5 wastes no time in showing you the horrific conditions of Hope County. After a brief helicopter ride, you are led into a church filled with armed psychopaths, and bear witness to The Father, Joseph Seed, and his fiery, doomsday-laden preaching. “We will not let them take out guns, take our freedom, take our faith”, he declares to his crowd, as you and your team of law enforcement approaches. You place Joseph Seed under arrest, and he ominously states, “God will not let them take me”, before you escort him out to your helicopter evac. Without spoiling anymore, rest assured that God did not let you take him.

The opening scene of Far Cry 5 is among the most intense, harrowing, and enticing opening scenes I’ve played in a long time, and sets the scene for the next 30 odd hours perfectly. You meet Joseph Seed and his family of “gatekeepers”, lieutenants who each control a section of Hope County. You hear testimony from civilians in Hope County, all of which you will meet and help on your journey. You witness the true savagery of Eden’s Gate, the cult that’s put down roots in Hope County, by seeing Joseph gouge another man’s eyes out in front of his congregation.

As mentioned, the game takes place in Hope County, a fictional area of Montana, and the focuses on a cult of religious nut-jobs called Eden’s Gate. Led by Joseph Seed and his “siblings” Jacob, John, and Faith, Eden’s Gate have taken over Hope County and turned it into a weaponised, drug-fuelled haven of madness. You, the player, are a rookie deputy sheriff, and in the process of arresting Joseph Seed in the game’s opening minutes you and your squad are attacked and scattered across Hope County, becoming the prey of the sadistic members of Eden’s Gate.

It is here where you begin building the resistance, the main crux of the first two-thirds of the game, by destroying cult property, completing missions for the Hope Country populace, and gradually taking out the leaders of each area. Destroying cult property (trucks, drugs, landmarks), rescuing civilians, and liberating outposts earns you RP, Resistance Points, and once enough damage is done you will be hunted by each of the lieutenants. Once each zone of Hope County has been liberated you will face off against Seed siblings in intense visual and gameplay experiences. These “boss fights” are a highlight of the main story, and stand out against some of the more rinse-and-repeat missions you’ll go through.

The members of  Far Cry 5’s Seed family each have their own unique traits, and the land they control reflects these traits. John is a powerful persuasive speaker, brainwashing new cult members into his “YES” movement, who controls the Holland Valley region. Faith, the adopted sister, is a frightening ethereal presence who manufactures a drug called “The Bliss”, turning the cult members into zombie-like killing machines. She controls the Henbane River region. Jacob Seed, my personal favourite of the siblings, is a sadistic and psychotic ex-military beefcake who runs the Eden’s Gate militia. He controls the Whitetail Mountains, and leads his army under his violent mantra: “Cull the herd, sacrifice the weak“.

While the premise and initial thrust into the narrative is exciting and tense, mainlining the story missions becomes a bit monotonous. I’d highly recommend taking in the sights and side content to let the narrative breathe, and engage with the many weird and wonderful characters in Hope County. 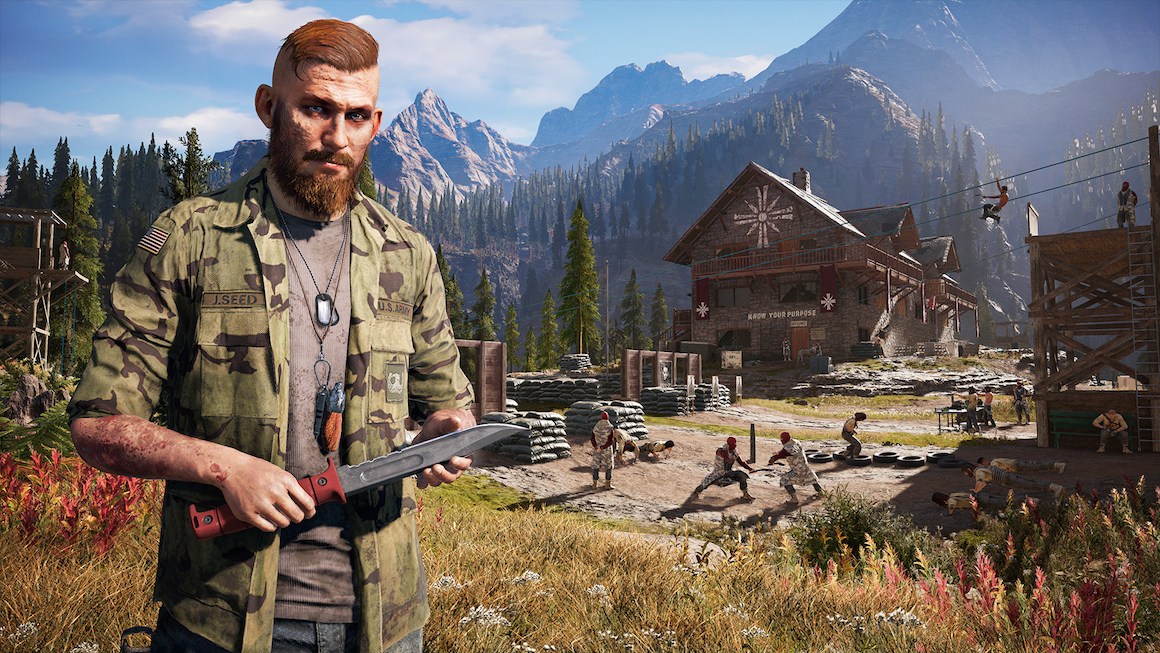 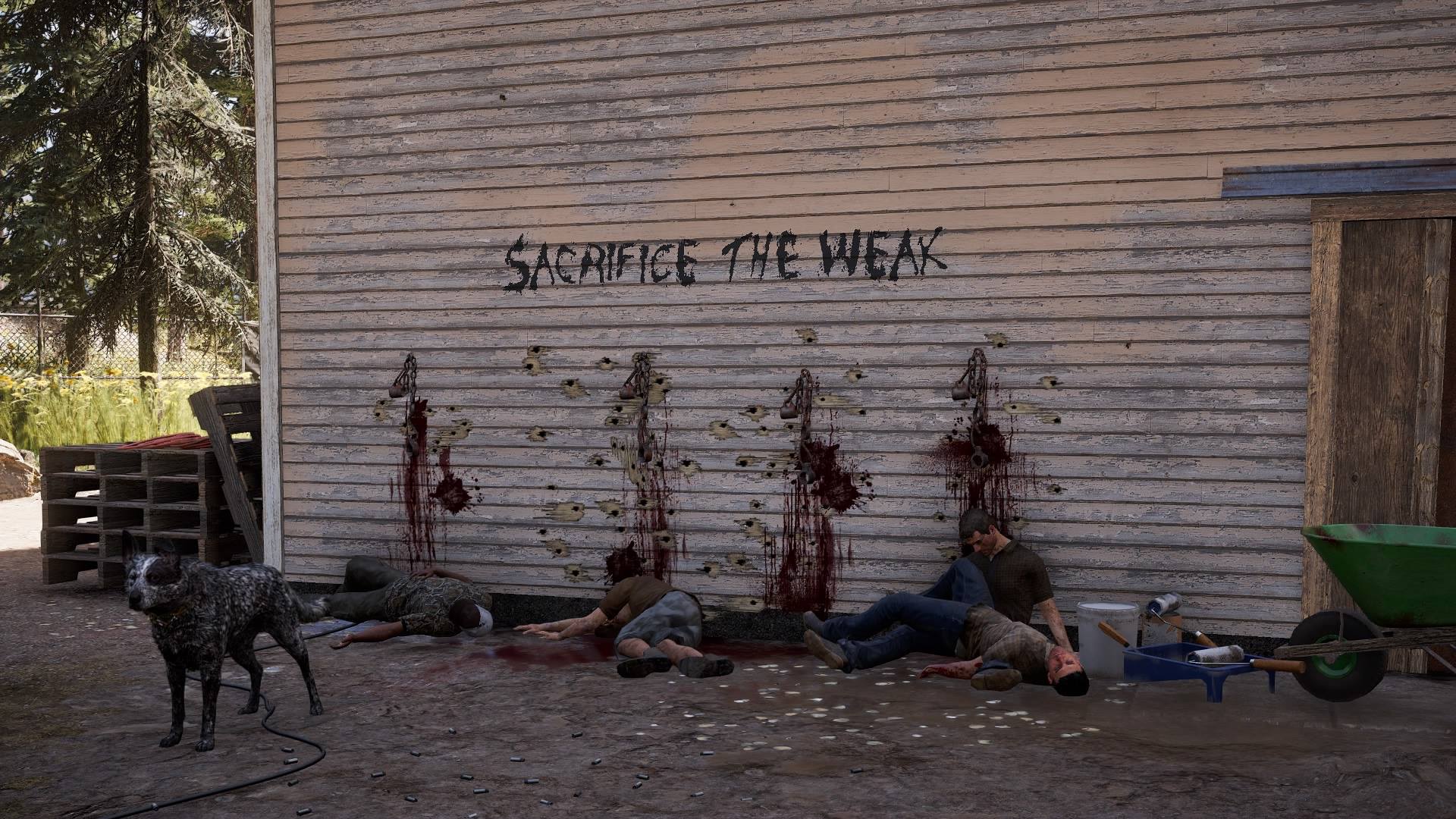 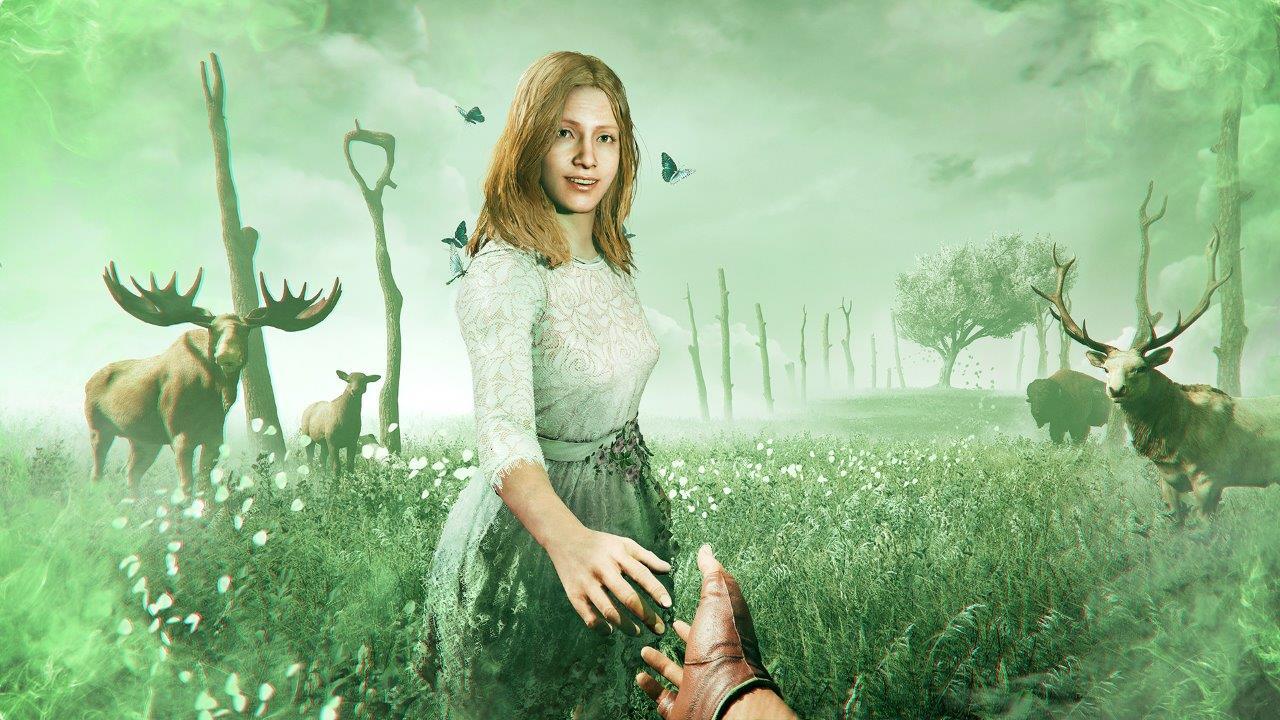 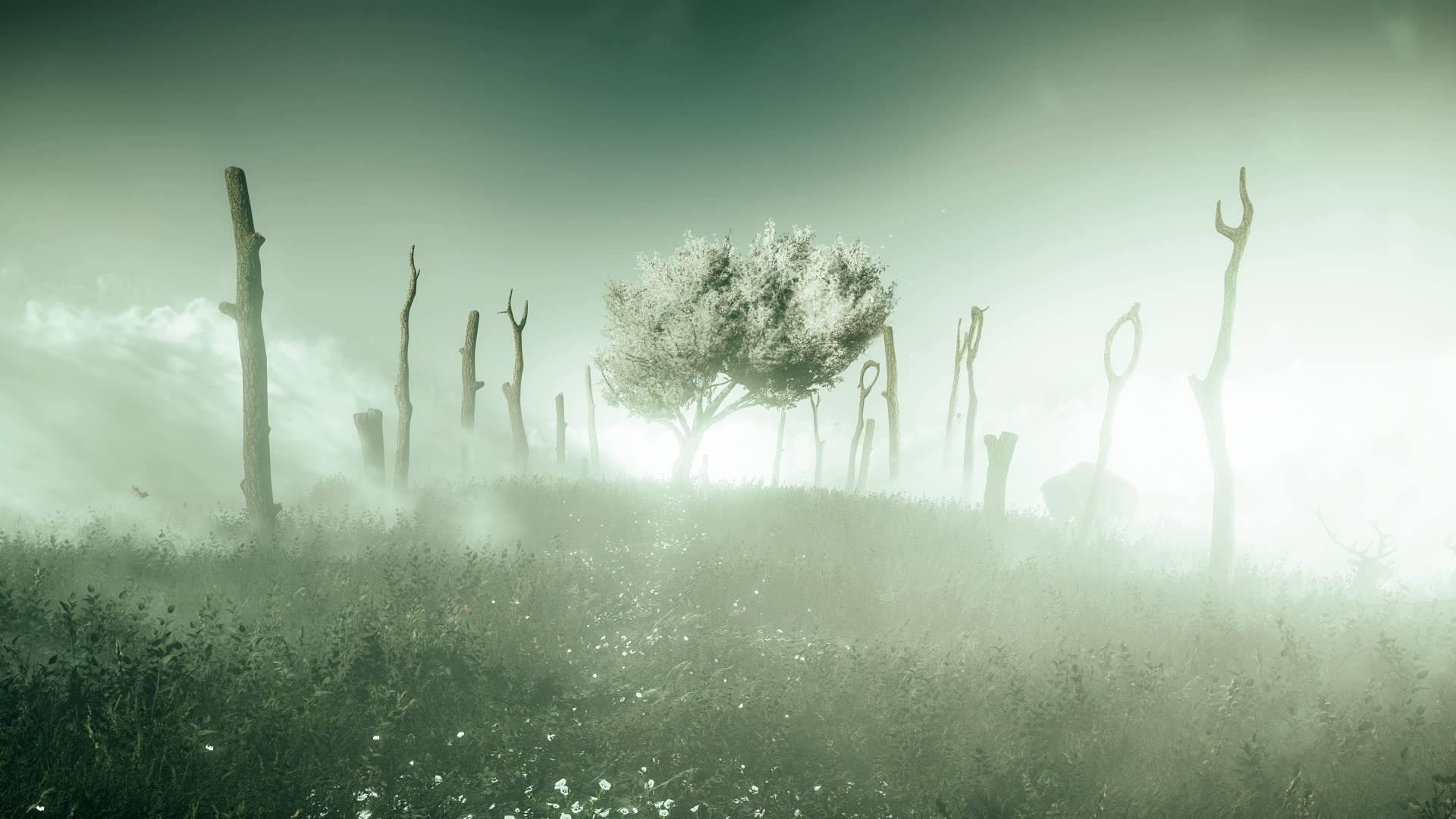 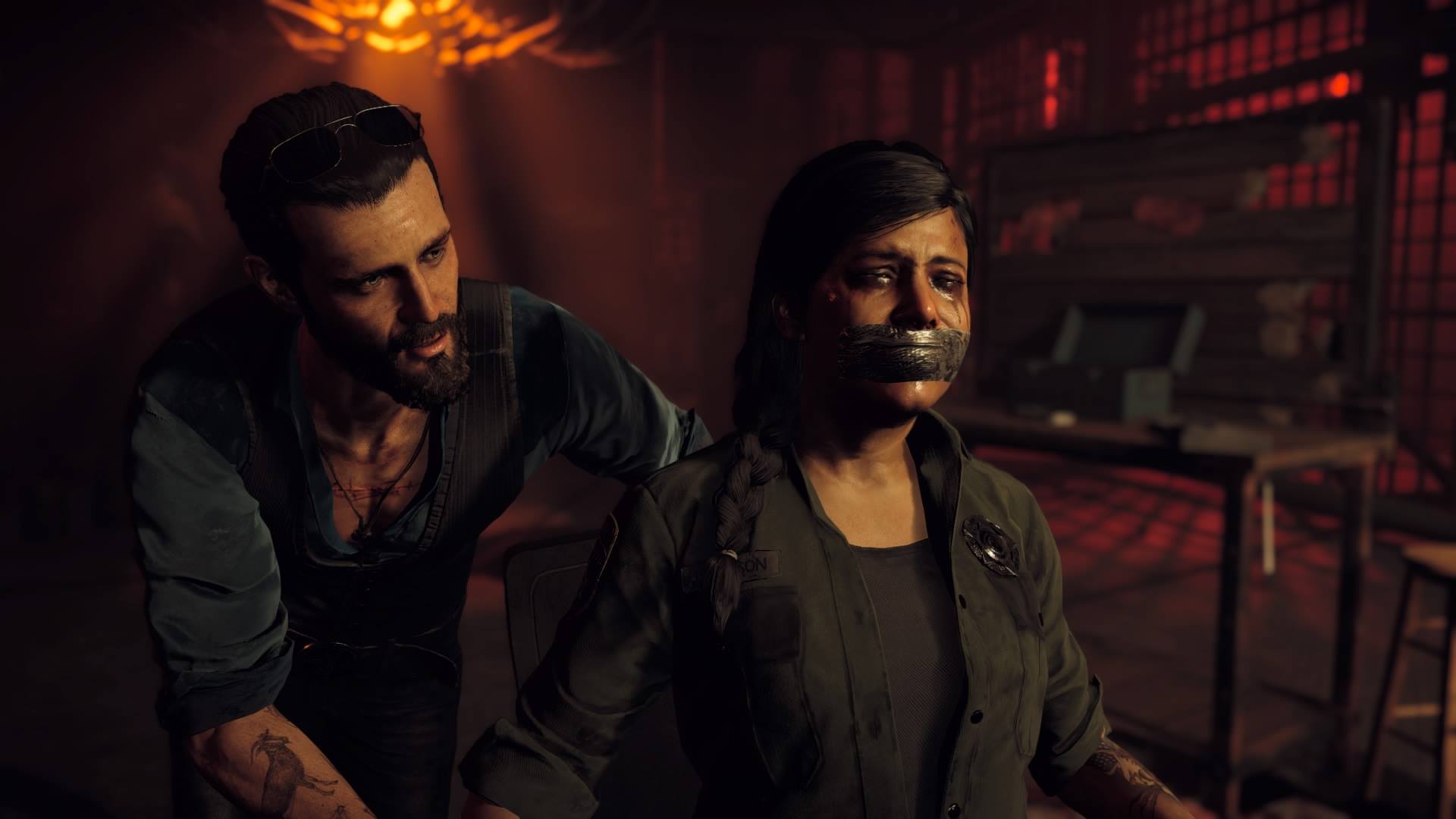 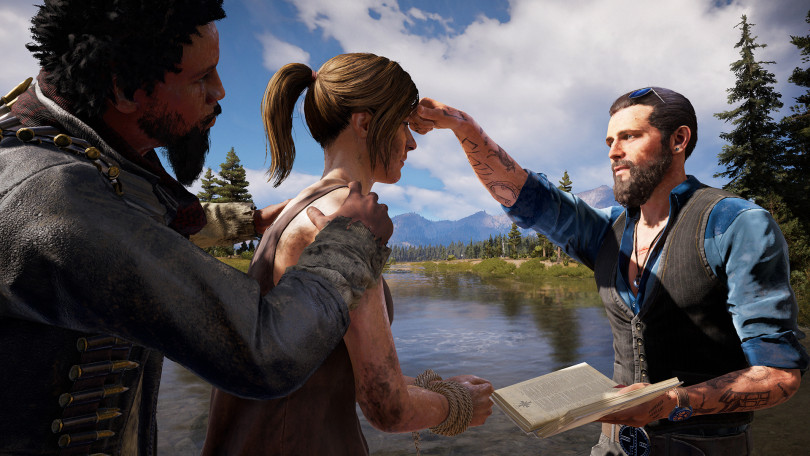 Far Cry 5 goes above and beyond to give players the ultimate playground to let loose in. Sure, there is a compelling narrative to experience, but what this series does best is provide a first-person sandbox filled to the brim with explosive goodies to detonate, ferocious wildlife to hunt, and an assortment of vehicles to tear around in. It isn’t rare to hear fans of Far Cry praise the side quests and distractions over the actual campaign, and at times I definitely agree with the statement.

Some of the better side quests include securing the safety of a film crew shooting a movie, burning drug fields (a Far Cry staple at this point), collecting bull testicles for the “Testy Festy”, and the daredevil “Clutch Nixon” quests. The Clutch Nixon quests are based on the legends of an old-time stuntman who was an expert with any type of vehicle, and completing these sees you flying planes, driving ATV’s, and sailing in a wing-suit through a gauntlet of death-defying checkpoints. These missions also have the best soundtrack in the game: a heavy metal anthem that screams “CLUTCH NIXON, IN HELL YOU WERE BORN”. As a metal head, this pleased me greatly. All this considered, as I chopped my way through my side quest log, I did feel bogged down in a few too many “fetch this, repair that” quests, which really only serve to pad the game out.

“Tired of hunting? Grab your fishing rod and hook some salmon, rainbow trout, or rock bass.”

Going between missions can often take hours due to the vast number of distractions around every corner; you could take the road and get to your next destination quickly… or you can bypass through a forest to hunt cougars, wolverines, and grizzly bears instead. Tired of hunting? Grab your fishing rod and hook some salmon, rainbow trout, or Rock bass. While you’re there, why not look out for the Doomsday Prepper stashes hidden in the world, or pick up some collectible comic books? By the time you’ll reach your mission, you’ll have a bag full of pelts, an armoury of new weapons, and a fresh batch of “perk points” to spend in the skill tree.

All of this chaos, bloodshed, hunting, and stunt driving is presented on one of the most gorgeous canvases in recent memory. Far Cry has always set itself among scenic beauty, but Montana’s Hope County is a cut above the others, and a cut above many other AAA games out today. Every where you look, there is picturesque wonder to behold; winding rivers, lush woodland forests, soaring mountain peaks, and rural farmland. The draw distance is astonishing, with landscapes many thousands of meters away rendering in high quality well before you get there, and up close everything is meticulously realised and has an incredible HD polish.

That sentiment, ‘meticulously realised’, does not just apply to the visuals. The people, places, and culture of Hope County has been meticulously realised as well, with the homes feeling lived in, the communities appear to operate autonomously, and the people inhabiting the communities actually live there. Many open world games have static NPCs, but Far Cry 5 has a dynamic and fluid culture that makes Hope County feel alive. 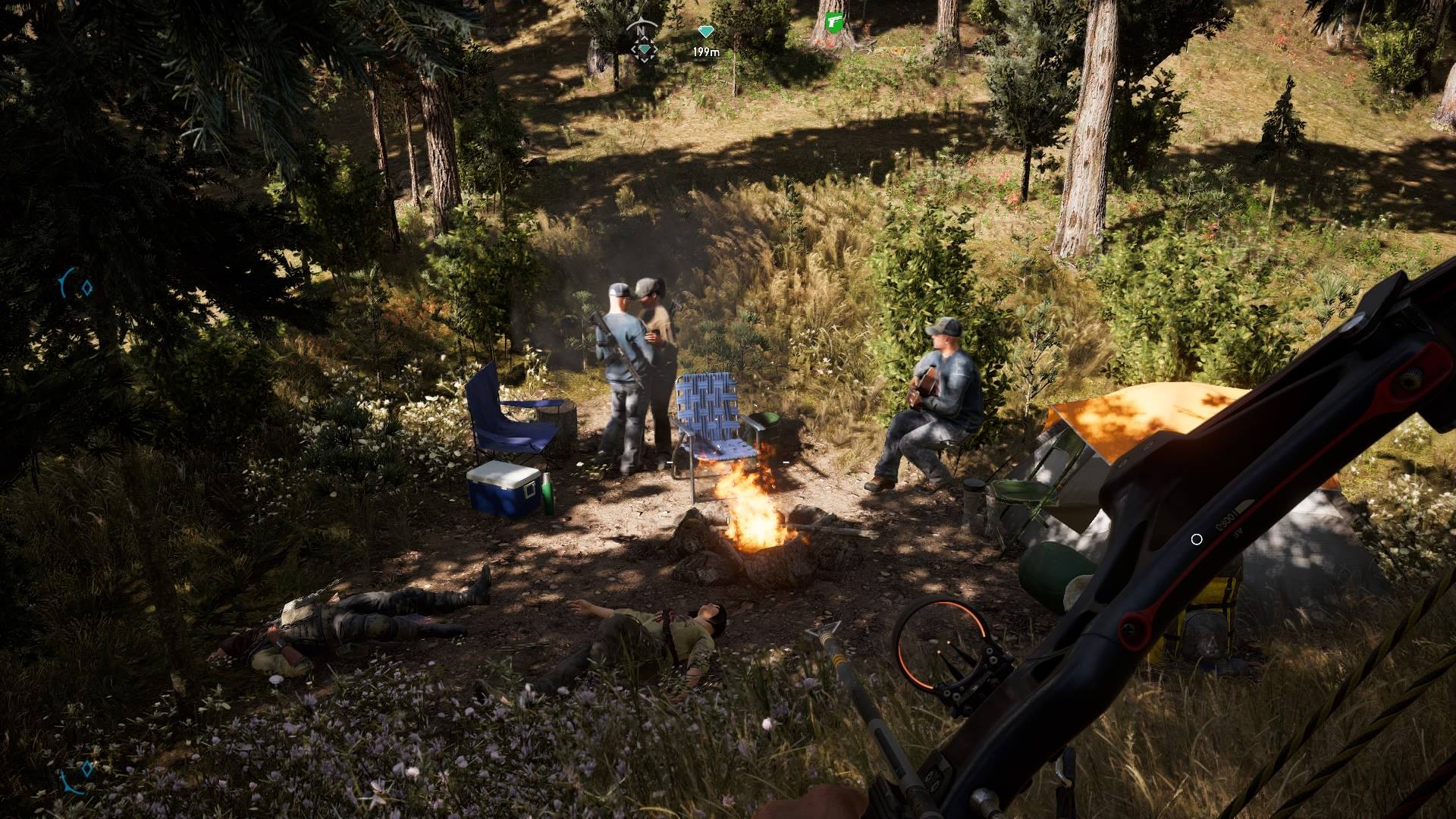 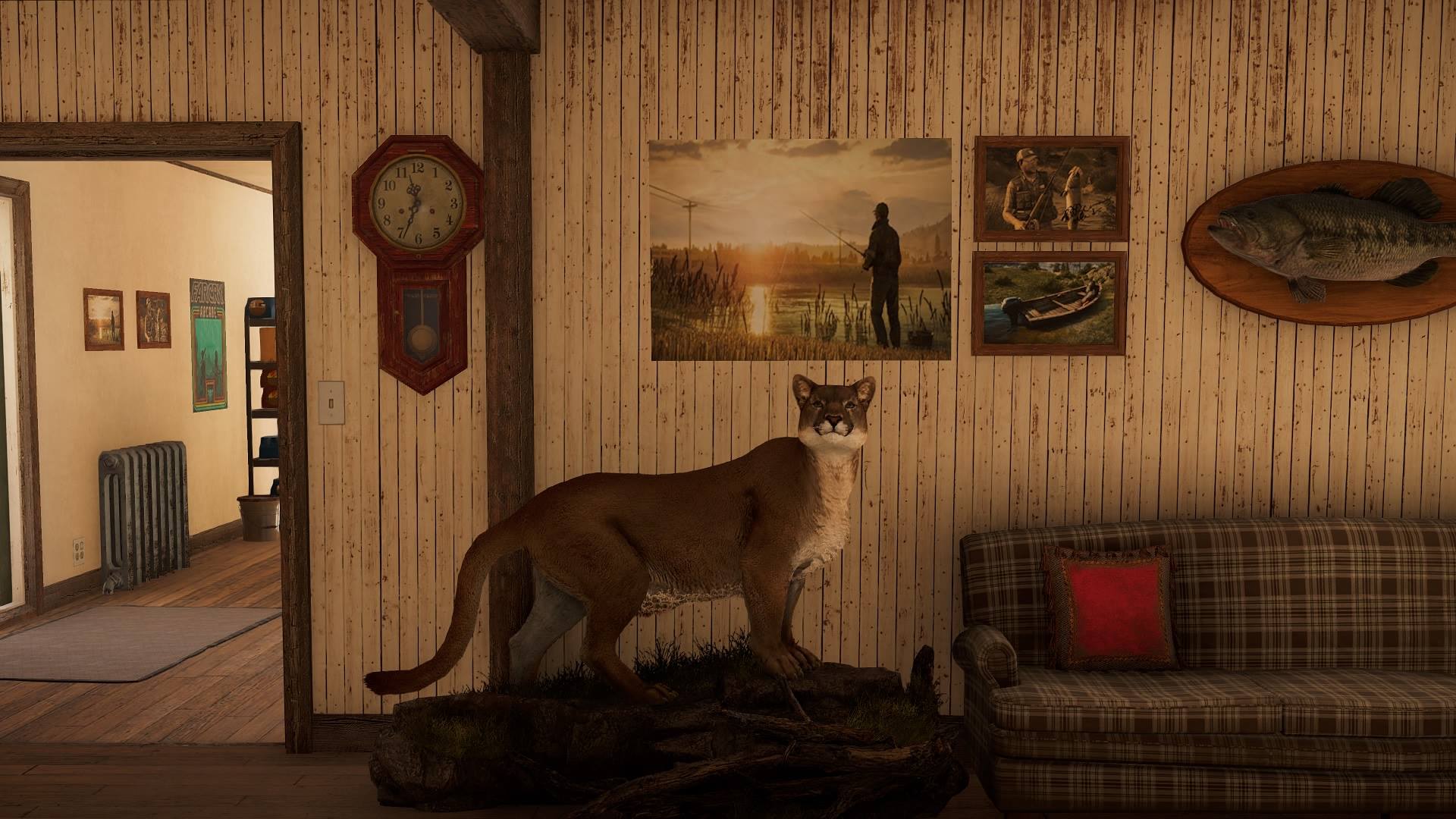 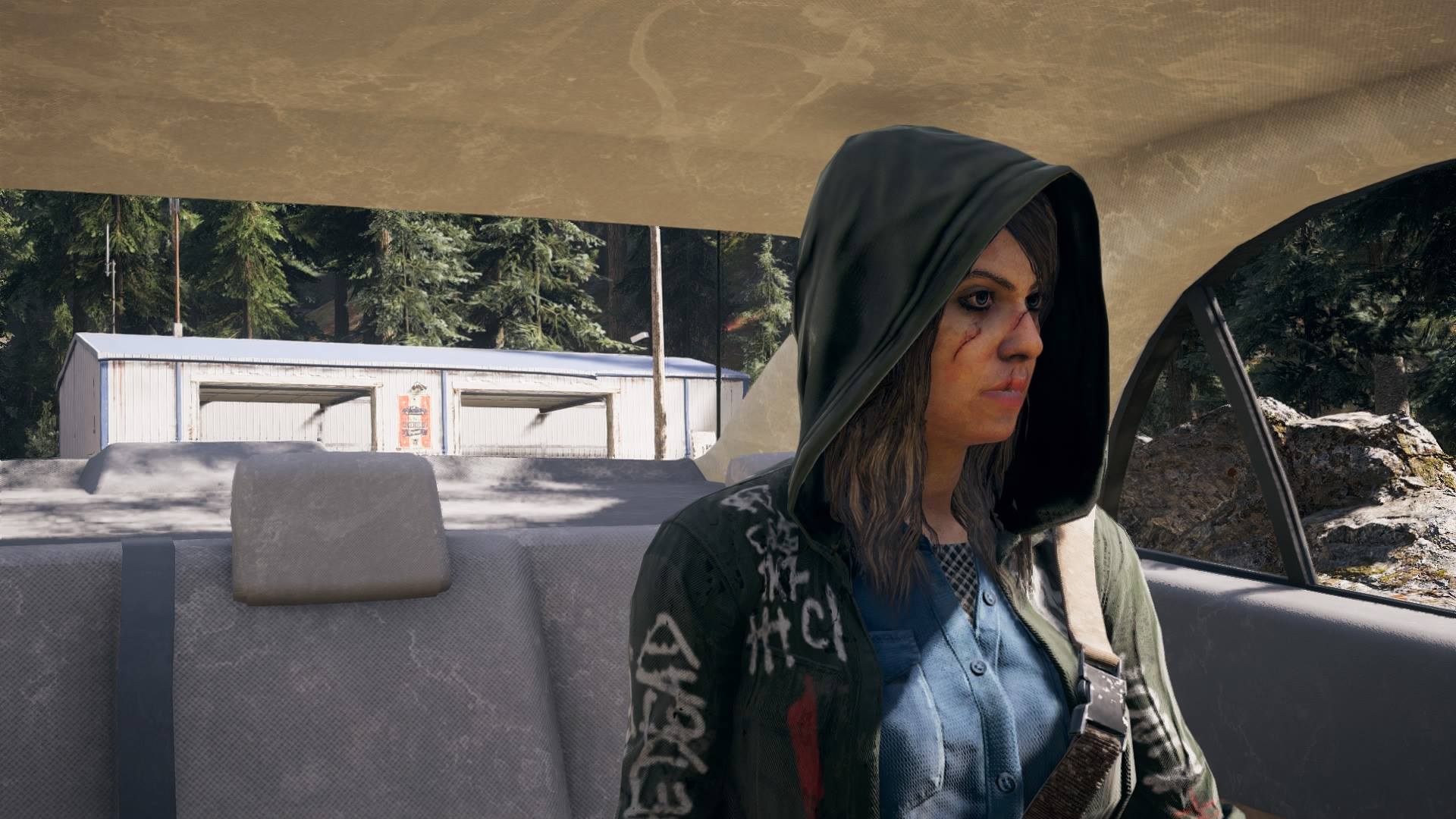 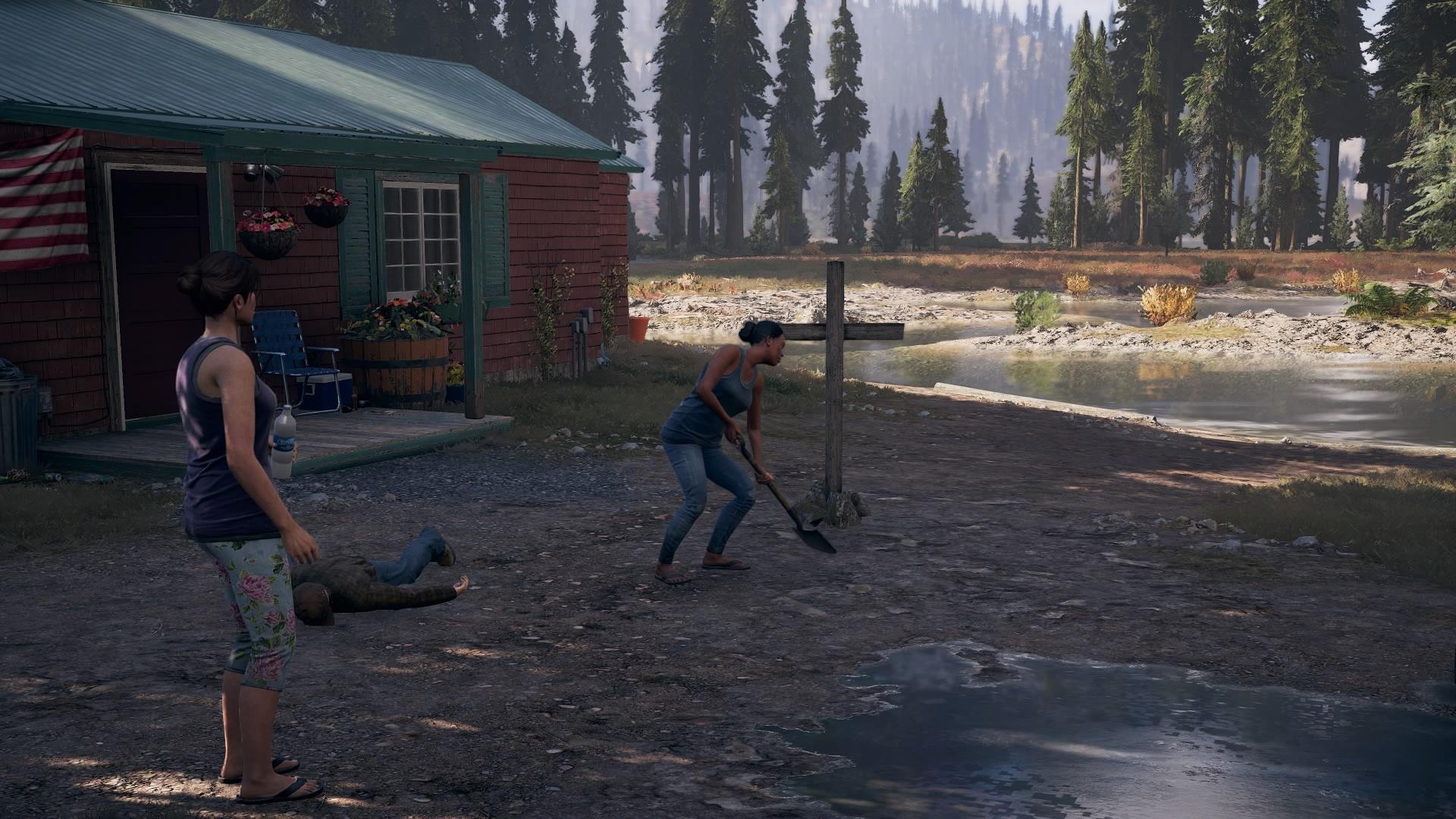 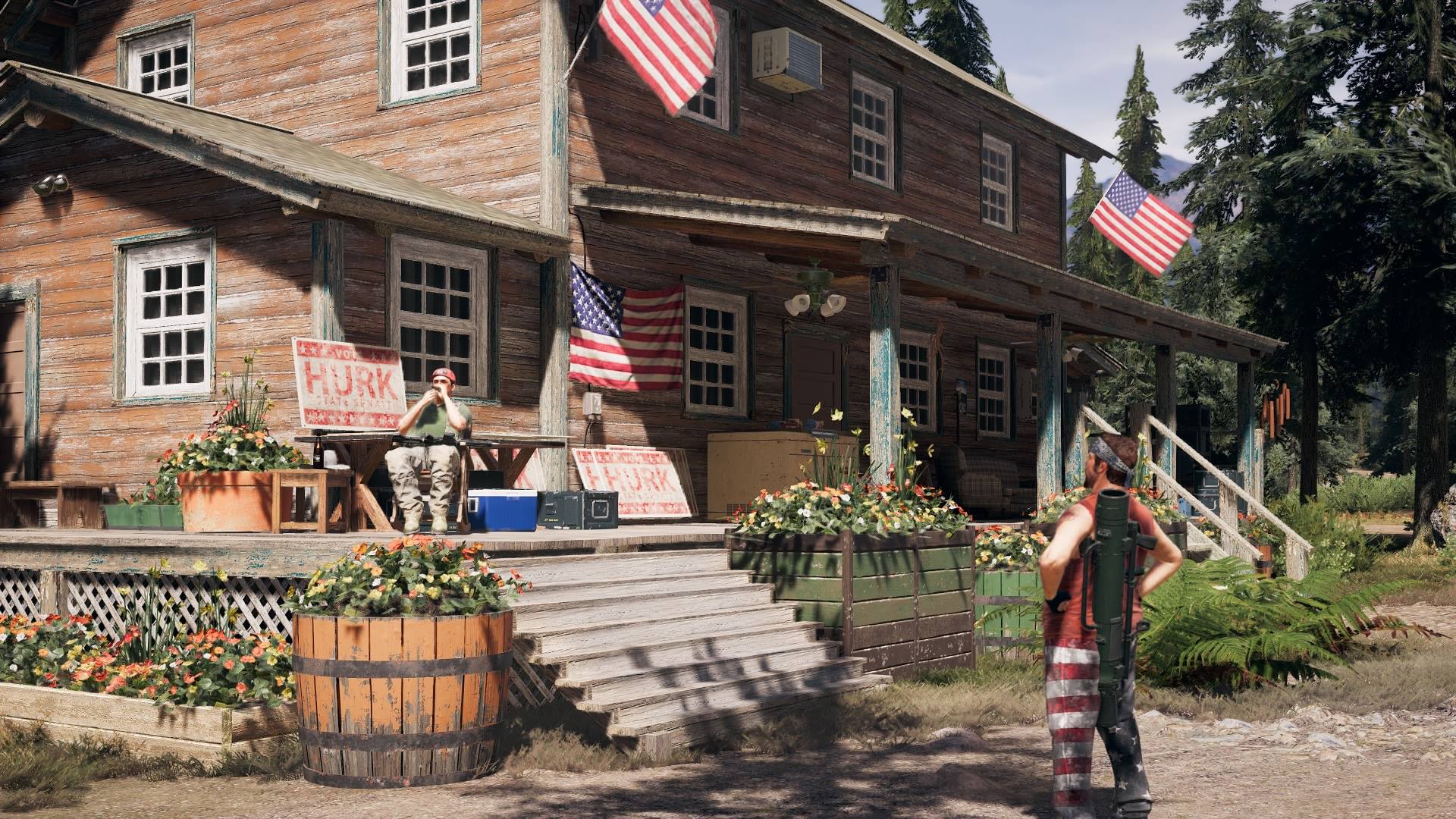 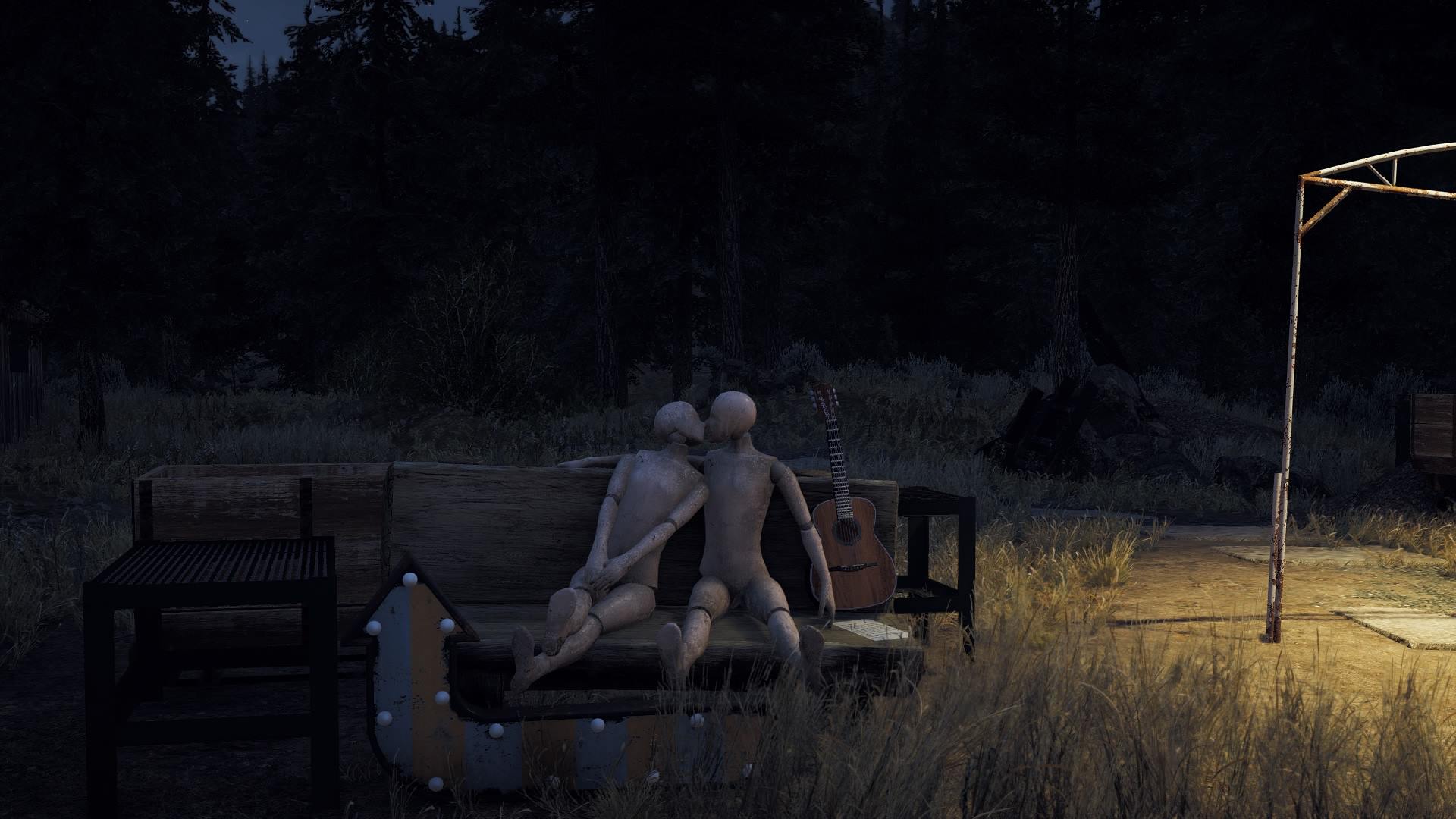 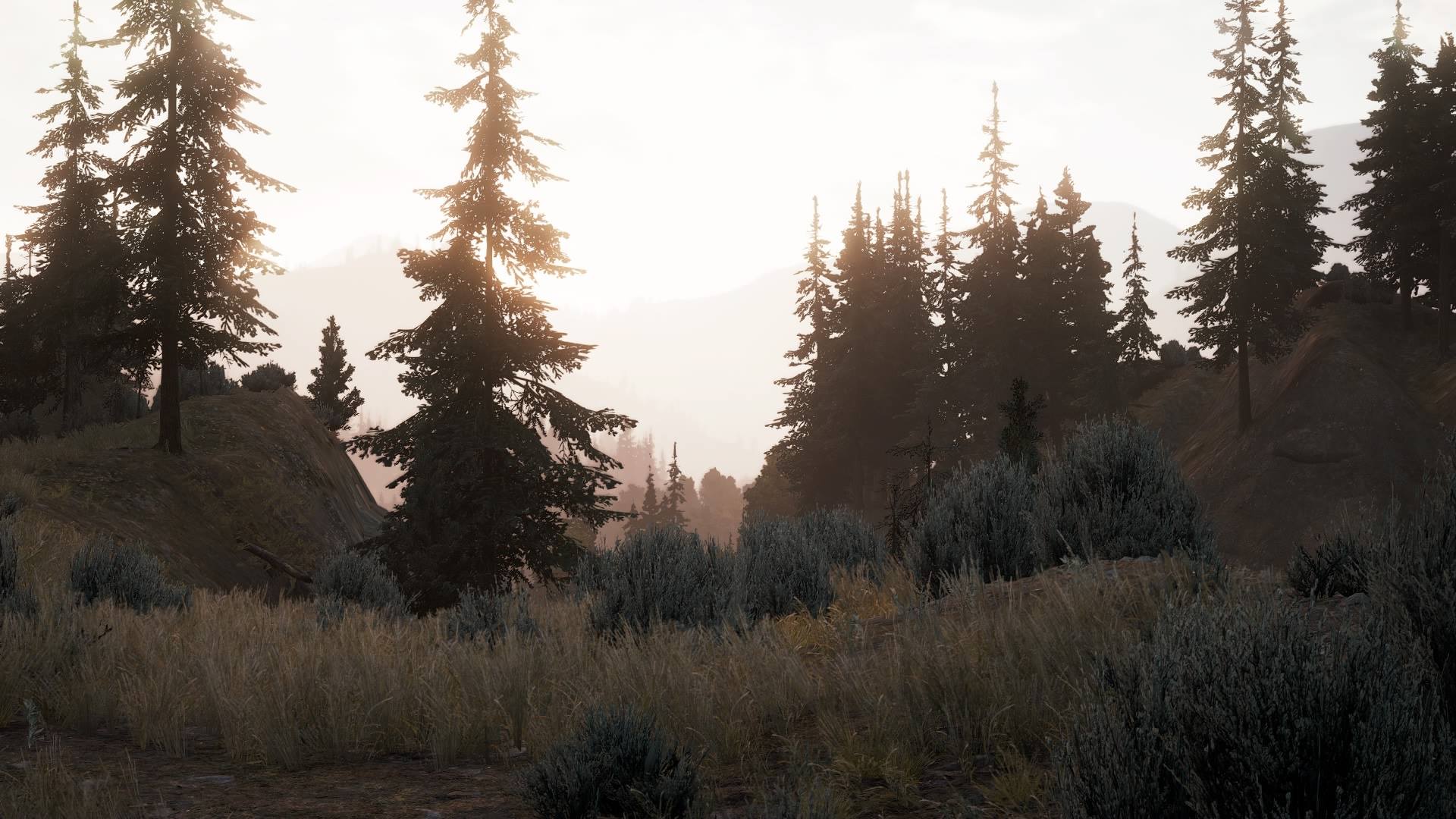 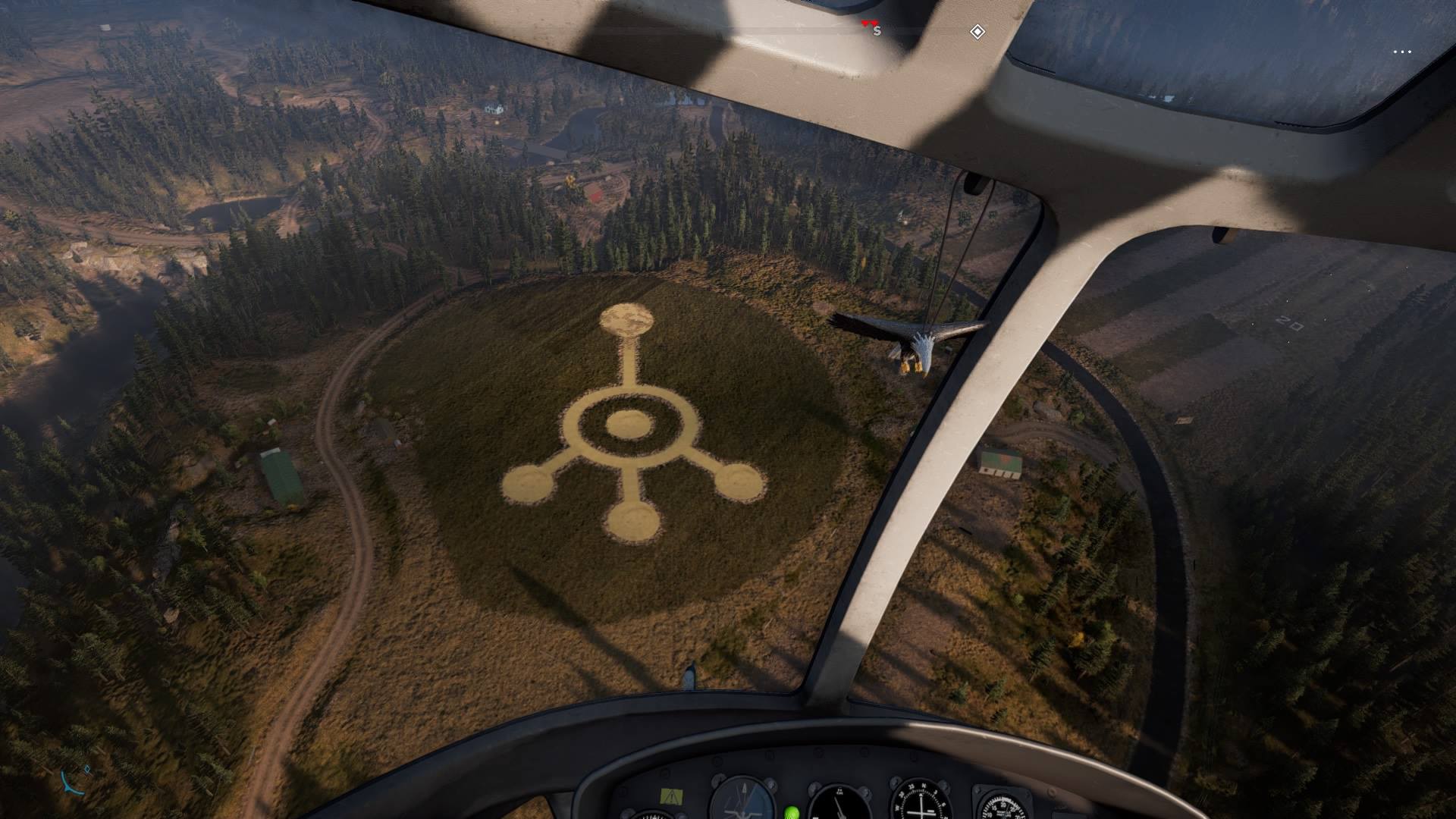 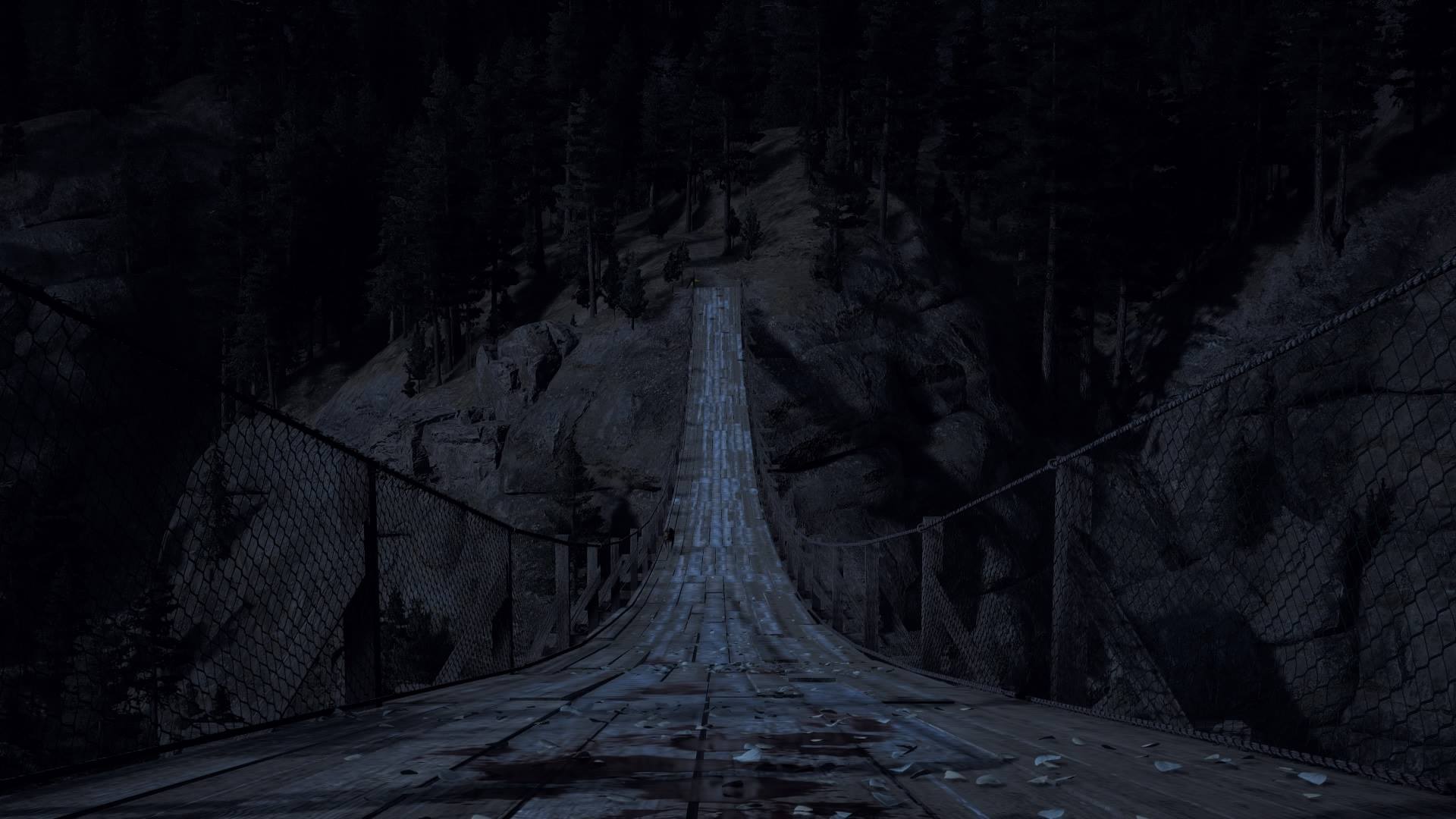 One of my favourite additions to Far Cry in this entry is the Gun For Hire/Fangs For Hire system. By completing certain missions around the world, you will unlock unique characters to aid you in your fight against Eden’s Gate. These include, but are not limited to, a hyper-sexual helicopter pilot, an insane flamethrower-toting hillbilly, a reclusive hunter with a compound bow, and a bear named Cheeseburger (I’m not joking). My absolute favourite has to be Cheeseburger, with his unique ability aptly named ‘Bear Arms”, where he exercises his right to bear arms (I found this way too funny). The other standout is Boomer the dog, who operates in a way similar to how D-Dog worked in Metal Gear Solid V; he’ll sniff out enemies, bring you weapons, and rip the throats out of anyone who dares attack his master. A bonafide good boy.

“Far Cry 5’s melodies have been wriggling their way through my brain since I first booted up the title screen.”

If you’ve read anything by me before, you may have noticed that I value music in games just as much as graphical fidelity. I’m so, so happy that Far Cry 5 has a great soundtrack. In the past, I wouldn’t be able to hum a single tune from a Far Cry title, but Far Cry 5’s melodies have been wriggling their way through my brain since I first booted up the title screen. Bluesy, swampy acoustic plucking punctuates the sweeping landscapes, causing you to take stock of the beauty around you. Enter a cult hideout and start shooting and the music rises with thundering drums and horns while the action picks up. This kind of dynamic sound design is so effective in games like this, and goes a long way in aiding the immersion, intensity, and thrill of combat.

Where the ball is inevitably dropped is in Far Cry Arcade mode. Unfortunately, none of the polish has made its way from the main game into Arcade, which is a janky and, frankly, boring mess. Arcade offers users the opportunity to build their own maps, and then play them against people in a multiplayer matchmaking mode. Ubisoft have crafted a few decent maps to start with, but it hasn’t taken long for users to fill the playlists with downright horrid maps. Now, due to this, the curated developer-made maps are buried under landslide of rushed, lazy maps that are frustratingly unbalanced and broken.

I spent 4 hours in Arcade, trying to find the diamond in the rough, but bad map after bad map and countless host migration and player drop-outs, I couldn’t continue. Things may improve over the coming months, and with the live events starting April 3rd, the multiplayer suite may get the quality boost it needs, but right now I am avoiding it like the plague. 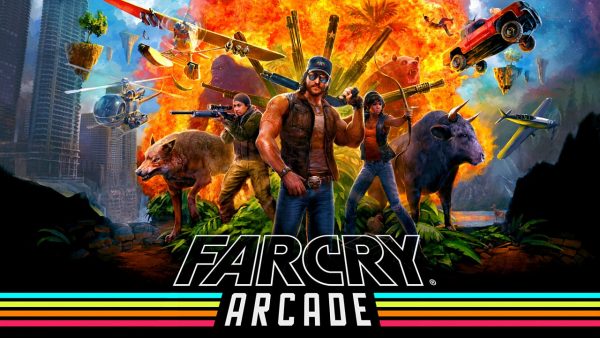 All this said, in the main game I barely encountered any issues, bugs, or frame drops. Massive open world games like this are usually riddled with bugs, but my experience was smoother than expected, with the worst of issues being the occasional dancing corpse or vanishing waypoint (nothing that slipping back into the map to reset won’t fix). The game runs smooth as can be, and even with explosives going off, cultists running every which way, and a helicopter on my tail, the frame rate stayed steady. Bravo, Ubisoft, bravo.

Far Cry 5 succeeds in bringing the series into the modern era by bumping up the visual quality, soundtrack, and providing a solid narrative baseline. The Seed family are among the best villains in the series, and conquering them and their regions on the map feels rewarding. The side quests, hunting and fishing challenges, and collectibles provide a plethora of activities to sink your teeth into, and at times trump the main story in terms of sheer fun. While Arcade mode is, in its current state, a disappointment, things could get better. Far Cry 5 is absolutely worth your time, and already sits high in my Game of the Year consideration.