Part metroidvania, part brawler, and part side-scrolling RPG, Super Daryl Deluxe is a funny, over-the-top, and challenging indie that doesn’t shy away from its influences. No where else, to my knowledge, can you travel from the pyramids of Giza, the great wall of China, & Ebenezer Scrooge’s mansion to the streets of Vienna, the musical halls of Beethoven and Mozart, and The Shire from Lord of the Rings. This game is jam packed full of pop culture references, twisted historical events, and an absolutely off-the-wall plot that will keep you shaking your head and muttering, “video games, man…” under your breath.

Super Daryl Deluxe is one of the most unique games I’ve played in years, but it is also one of the most flawed. Where the combat shines, the dialogue takes a crippling hit. With great RPG systems comes a frustrating control scheme. A snazzy comic-book art-style is unfortunately hindered with nary a likeable character in sight. Add to this a severely stretched out playtime, and pages upon pages of dialogue fluff, and it makes it hard to give Daryl the A+ he might have otherwise deserved.

You play as Daryl, the new kid on the block at Water Falls High School, where strange things are certainly afoot. After meeting with the strangely robotic principal, you find yourself entangled with a crew of textbook-hocking scumbags who order you to scour the school in search of the textbooks to sell. These textbooks become the premium currency in the game, but more on that later. As Daryl ventures through the halls of Water Falls high, the classrooms give way to other dimensions where characters, both historical and fictional, exist. The game developers have flexed their creative muscles to mash up every imaginable reference to popular franchises, fairy tales, classic literature, and historical fables as inhabitants of these classrooms. This is where Daryl spends the bulk of the game, traversing these rooms in search of textbooks and completing quests for those he meets.

Super Daryl Deluxe’s greatest strength lies in the wonderful marriage of side-scrolling brawler action and a deep metroidvania/RPG crossover. The combat is smooth and intuitive, the platforming solid, and the RPG mechanics are implemented perfectly. When you level up, you feel more powerful, and when you equip better gear you can definitely see a boost in your stats. Spending textbooks allows your to unlock more skills, such as swinging a rhinoceros around or riding a great white shark into your enemies. The skills and abilities are varied and allow for all sort of play-styles, and I found myself experimenting again and again with different combinations. Initially the control mapping for the skills is clunky and obtuse, but with a little time I found I got used to it.

“Super Daryl Deluxe spends so much time cramming puns and punchlines into its dialogue, the task at hand is more-often-than-not left forgotten.”

The story and side quests of Super Daryl Deluxe are so intertwined, it’s almost redundant to have them called side quests at all. Most story quests require items collected from, or tasks completed that are directly tied to, side quests, which then leads down the rabbit hole of more side quests. I’m not saying that these distractions are a bad thing, but when the game gets tangled up in its own clever web its trying to weave, it can leave the player feeling fatigued. There is only so many walls of “clever” and “witty” prose I can take during one side quest, let alone 10.

Indeed, Super Daryl Deluxe spends so much time cramming puns and punchlines into its dialogue, the task at hand is more-often-than-not left forgotten. Yes, some of it hits the mark and got a few laughs out of me, but there’s a line and the game certainly leaps over it.

Where the prose and excessive dialogue is a let down, high praise can be given to the variety of locations you visit during the game. An early-game highlight is the “Music & Art Classrooms”, where you find yourself completing quests for Beethoven, and duking it out against Skrillex and his army of boombox-wielding saxophone men. Roaming the streets of Vienna, you’ll find sculptors and painters, and even do fetch quests for the great Andy Warhol. Traverse the top floor of the theater hall and you’ll meet Mozart experimenting with dub-step, while a wannabee Ghost Busters crew attempt to capture and remove trombone-toting ghosts. Does this all sound ridiculous? Wait until you help Ghengis Khan build a trojan horse while picking flowers for Cleopatra in the history class.

The enemies inhabiting these worlds are as varied and interesting as the locations themselves. Flexing cactus, glass beakers with bulging biceps, cursed nutcrackers, flesh-eating meatballs, a schoolboy that transforms into Donkey Kong… I could go on. The whimsical and absurd nature of the character design certainly adds flair to the already out-of-this-world scenario, and is perhaps the closest the game comes to achieving its potential. The comic-book style of the drawings and the disparity between monochromatic and full colour palettes goes the extra mile to highlight these visual wins, often making me feel like I was indeed playing through a comic book.

“Daryl makes sure you have worked your way through every nook and cranny to get enough XP to hold your head above water.”

It would be neglectful of me to not mention the difficulty; Super Daryl Deluxe is no pushover. Amidst the endless dive through side-quests comes the need to grind, as each new area means a big jump in enemy strength. In other RPGs, simply playing through the story thoroughly nets you enough XP to stay at the appropriate level, but Daryl makes sure you have worked your way through every nook and cranny to get enough XP to hold your head above water. There are several difficulty spikes early on in the game which required me to go away and grind, adding about 5 – 7 hours of playtime to the already stretched game. I don’t mind hard games, but I do mind forced grinding. 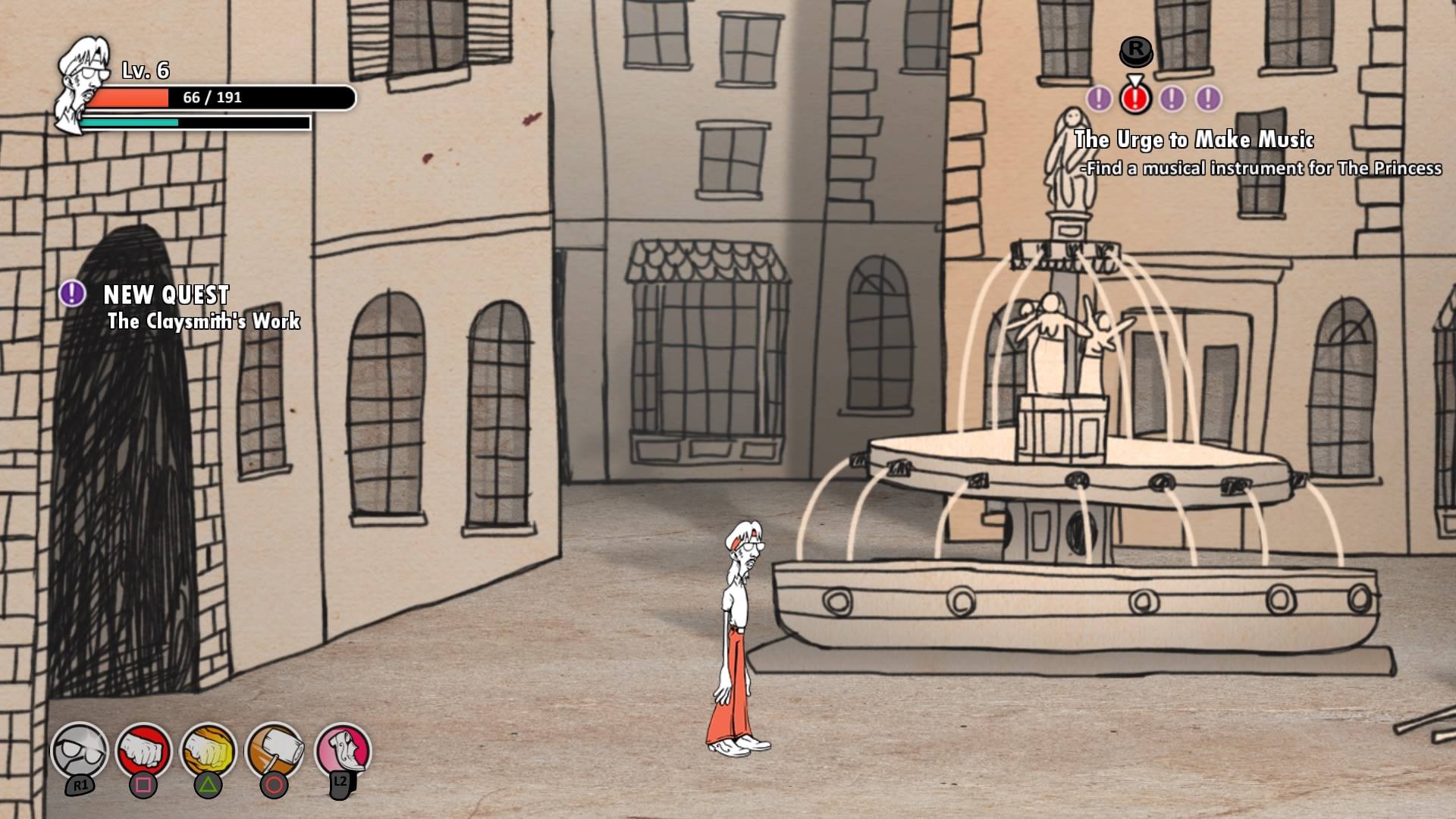 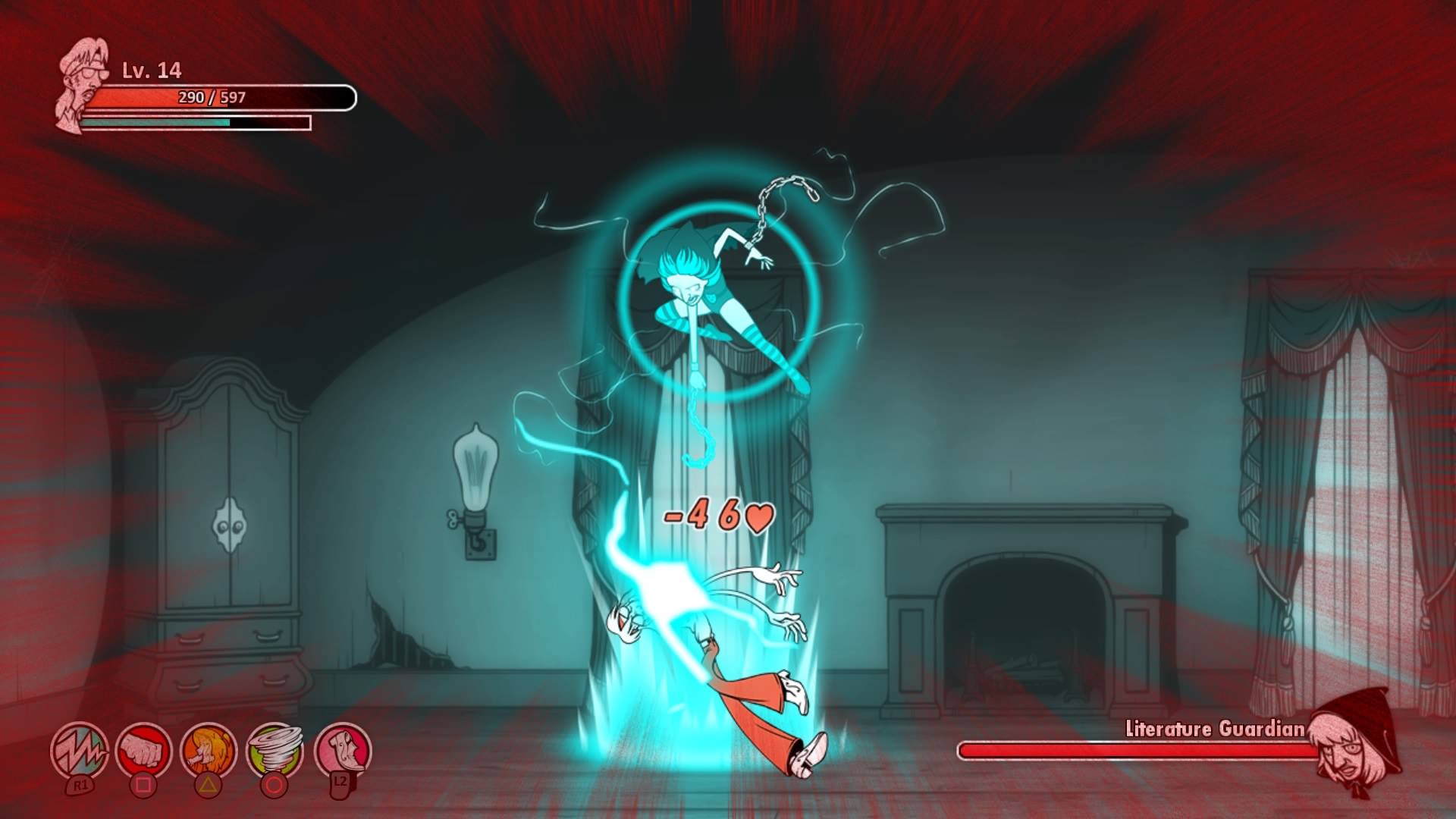 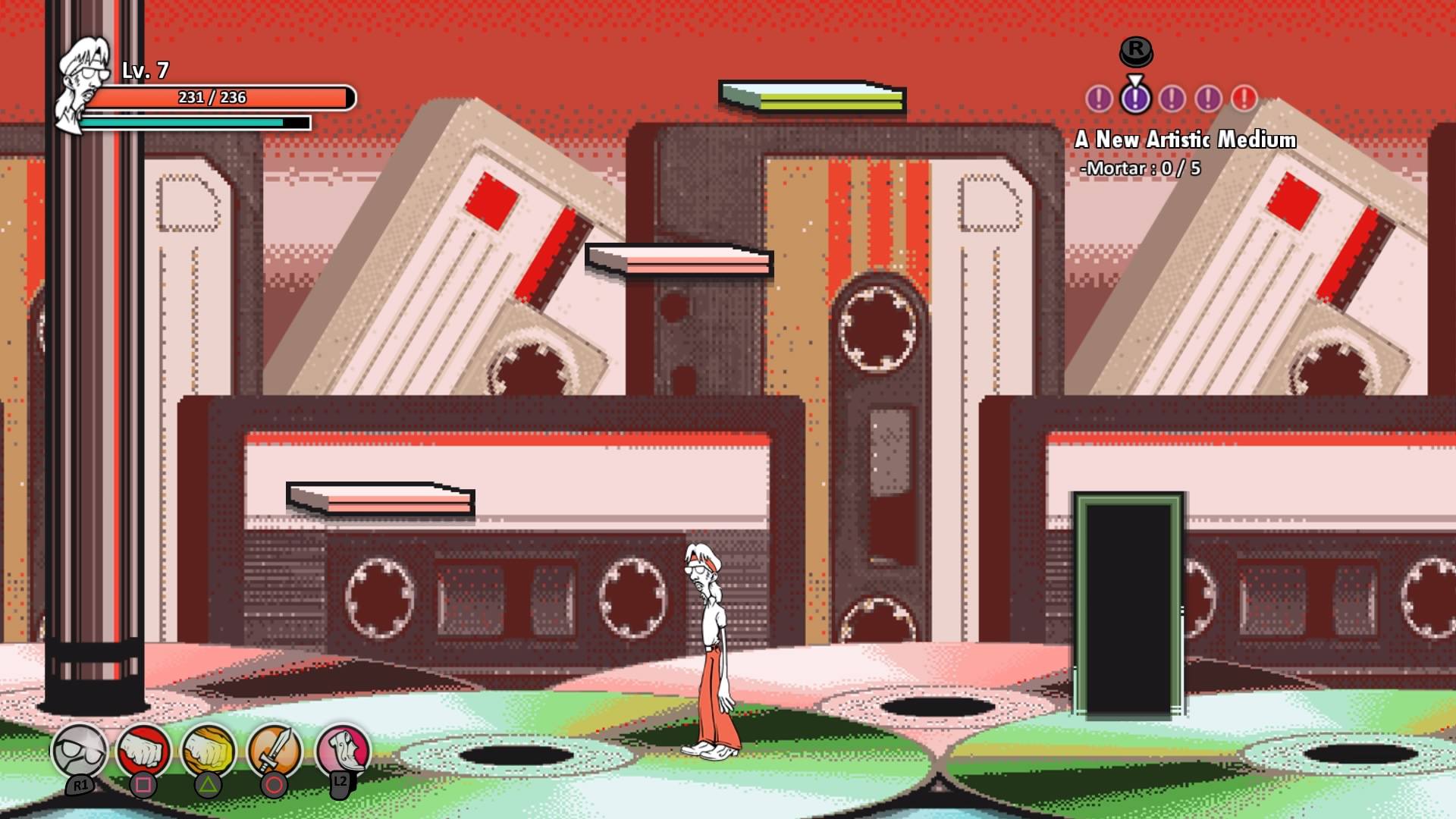 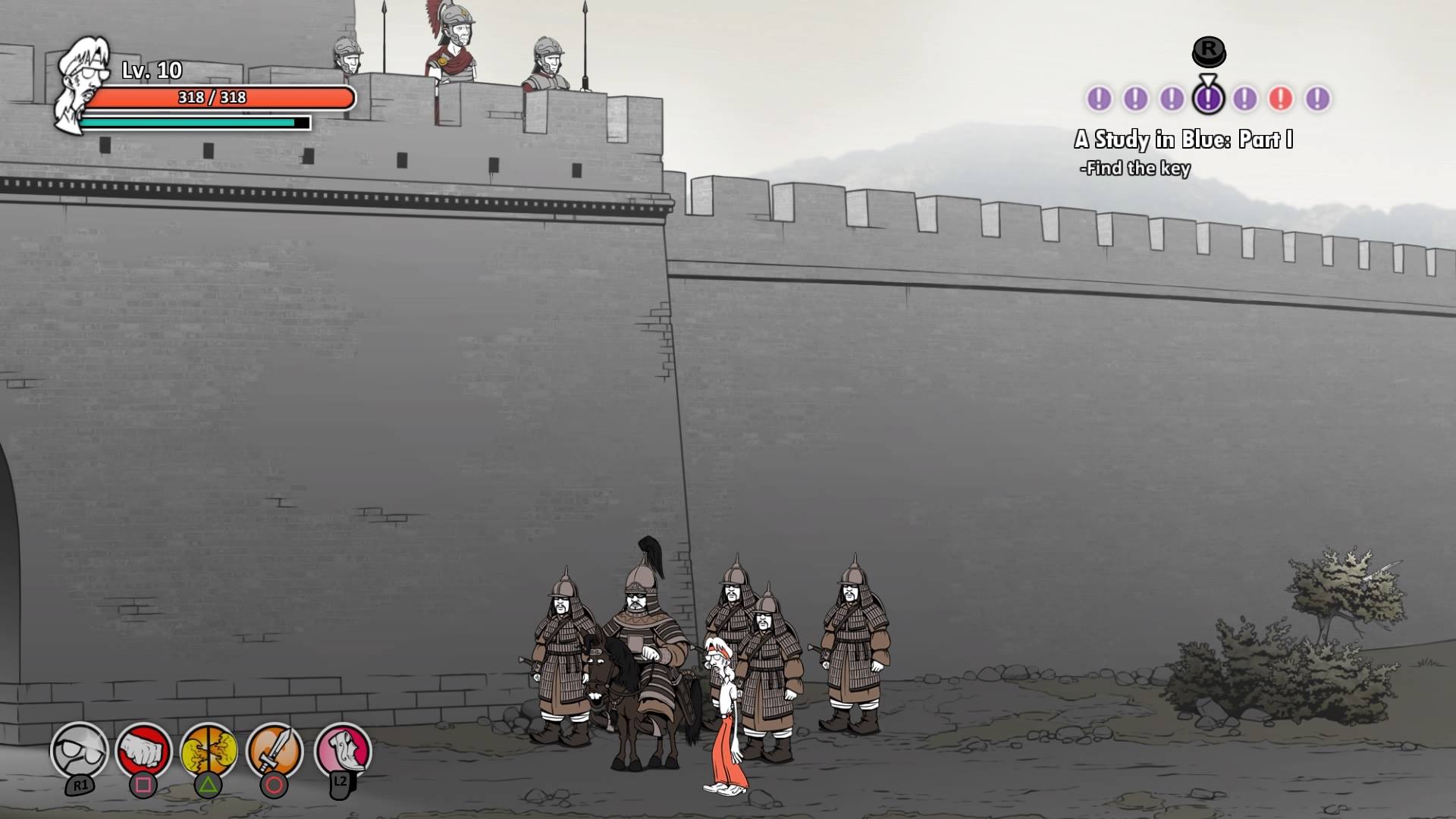 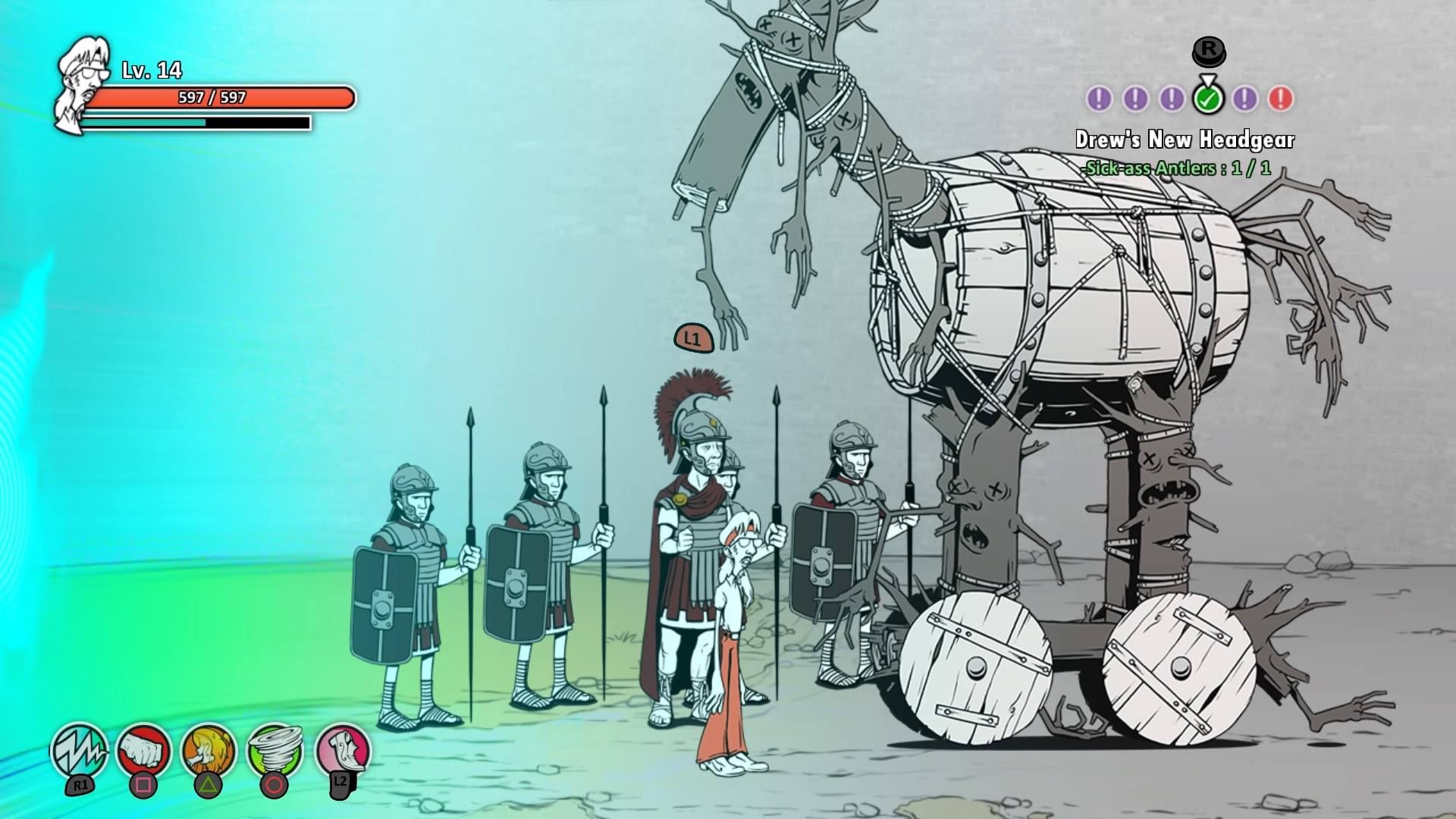 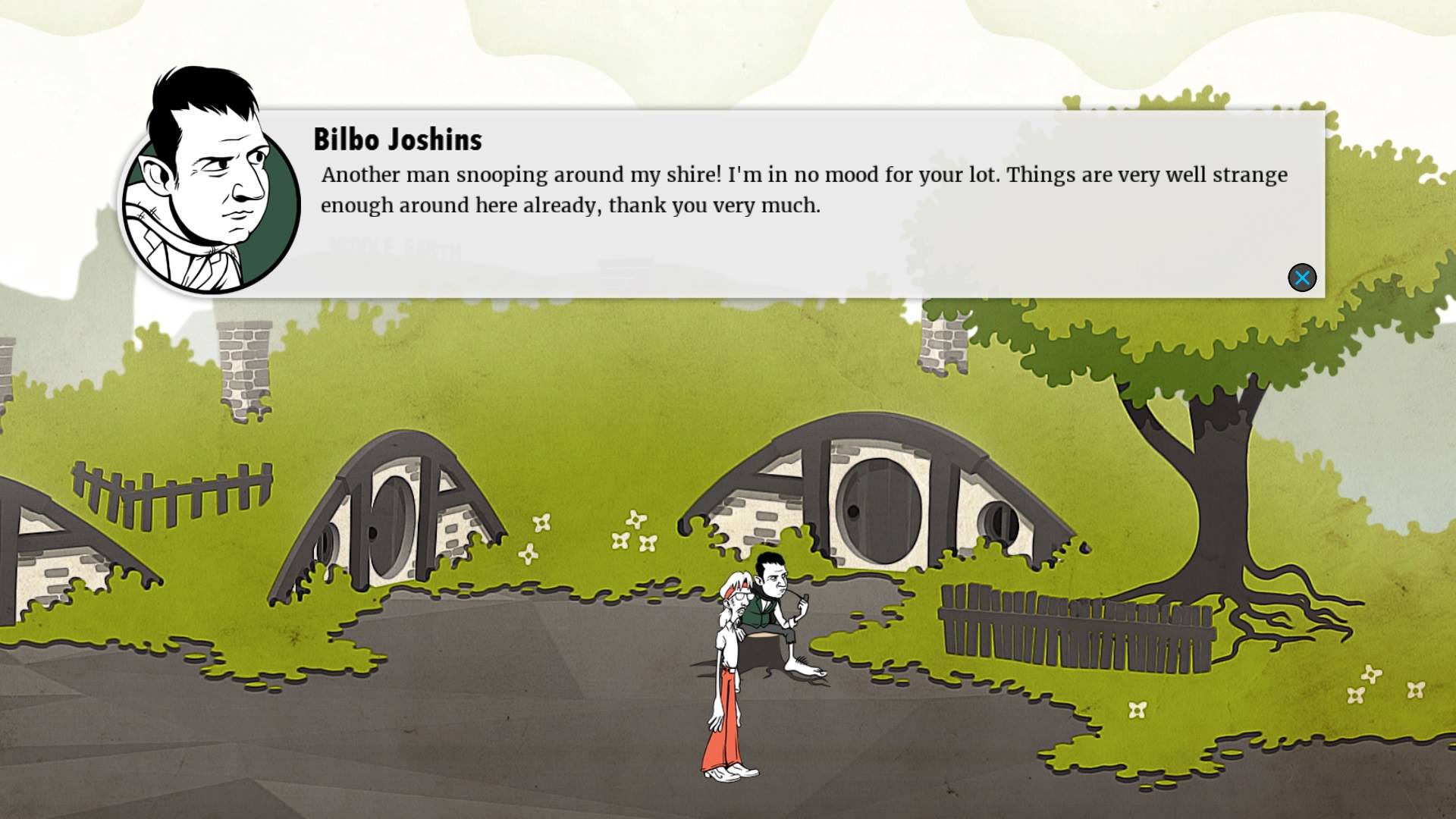 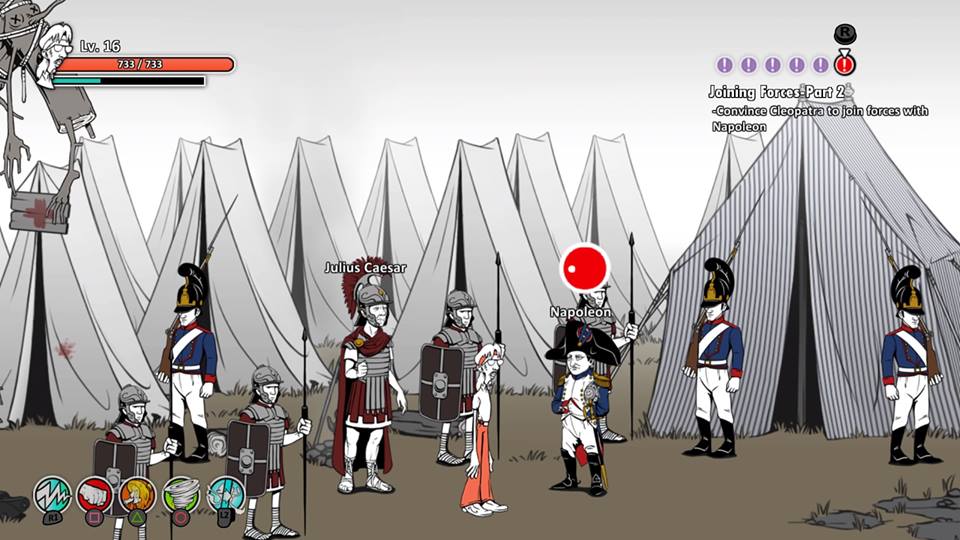 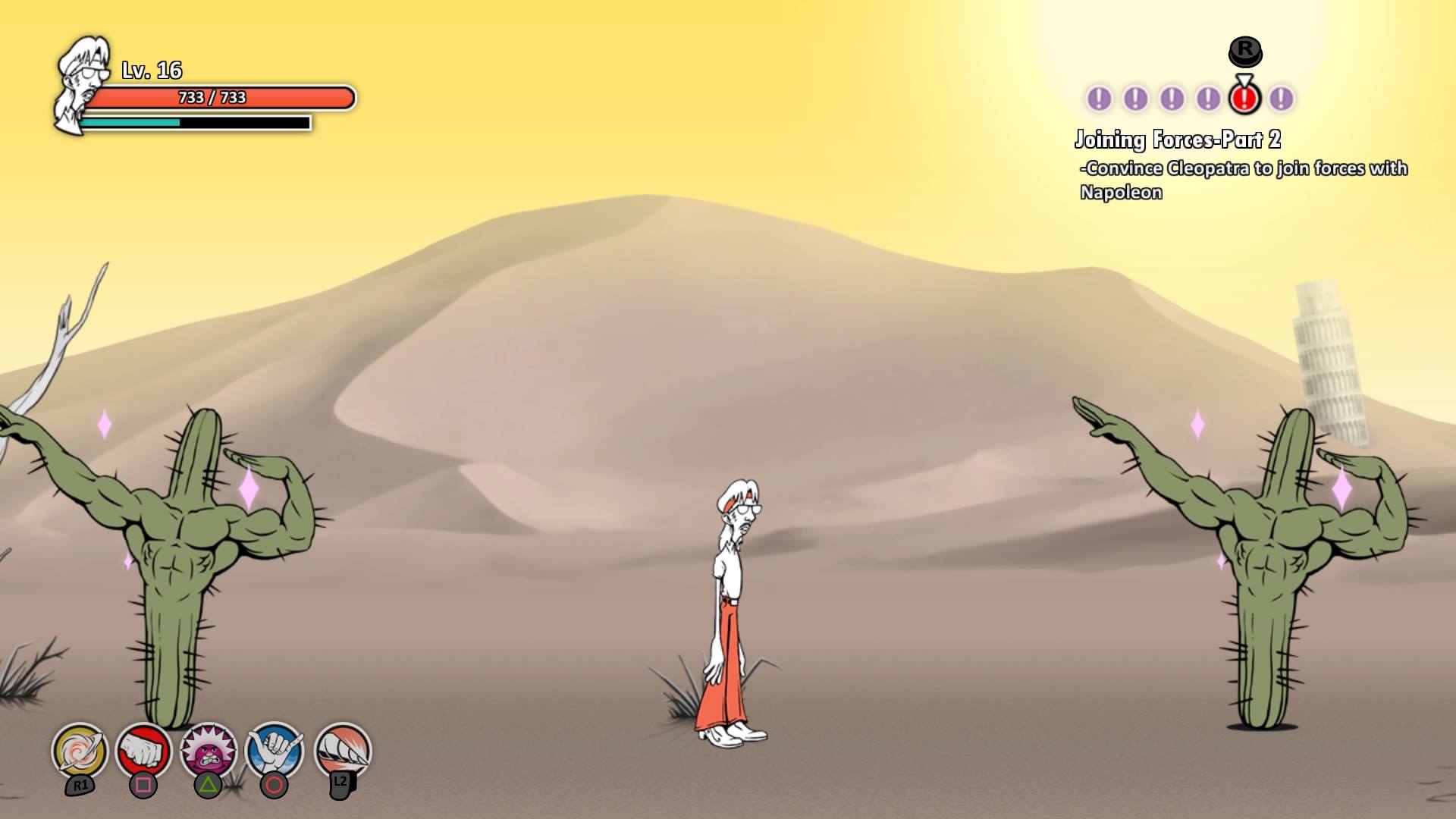 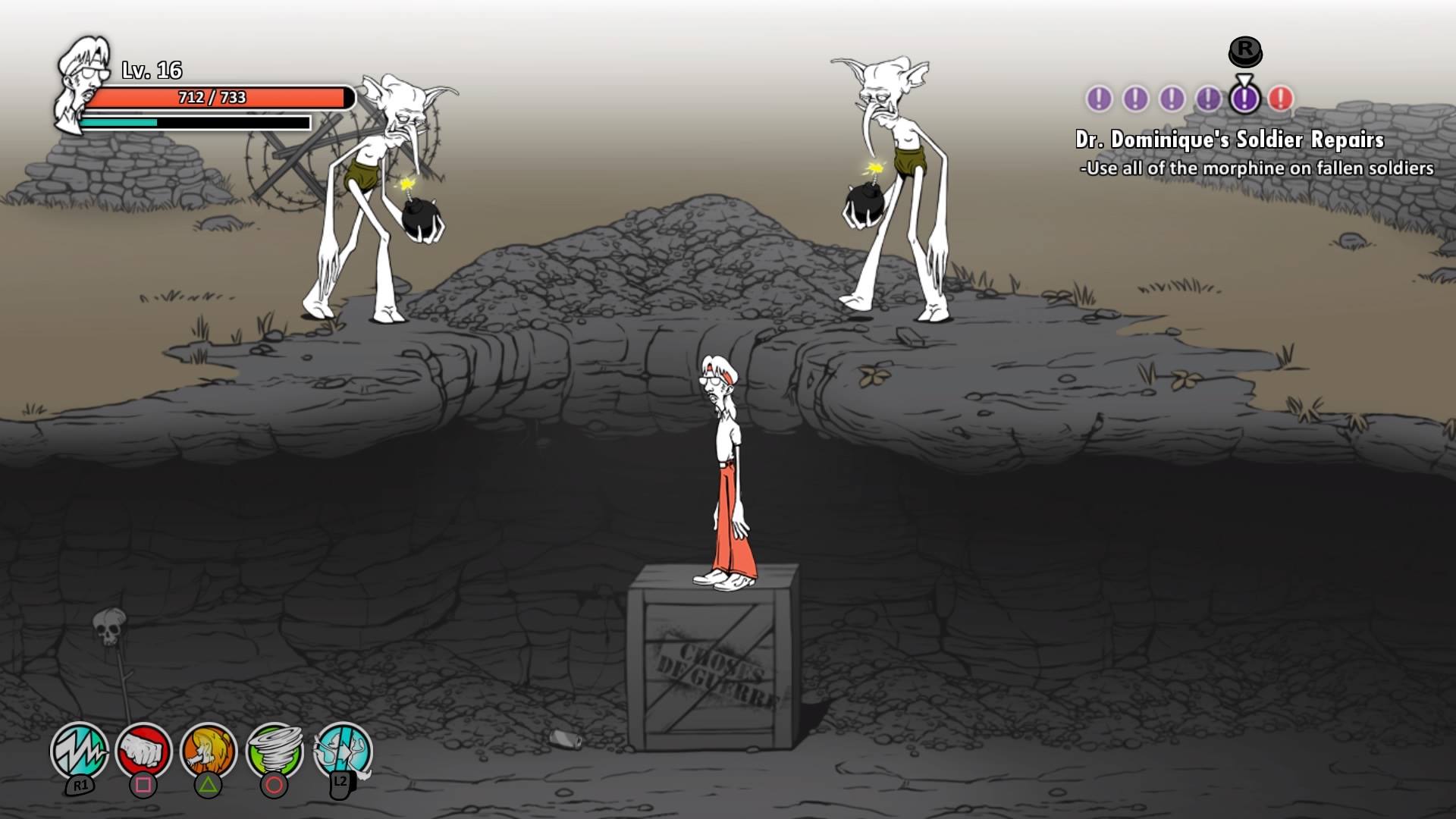 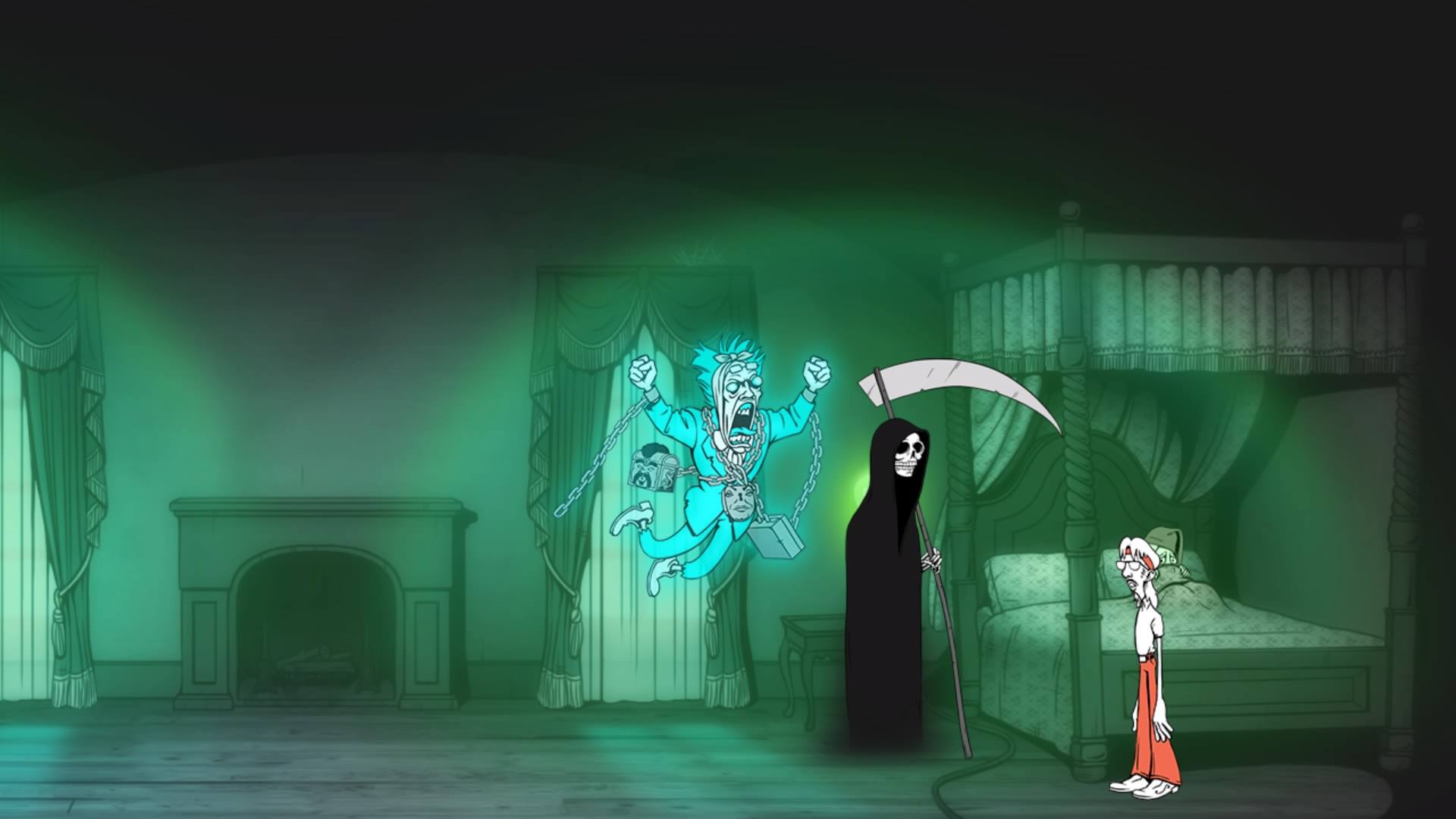 The music is, unfortunately, one of the most bland elements of the game. Dull, repetitive tones fail to complement the visual feast on display in Super Daryl Deluxe, and for me that is a big disappointment. Clearly the game takes influence from Bill & Ted’s Excellent Adventure (visiting and interacting with different characters throughout history), and even takes the time to reference the titular characters themselves, so it is a real shame the game doesn’t echo the one-two punch of tight visuals and a solid soundtrack.

While 70% of the game’s dialogue is text-only, there are the occasional cut-scene with voice acting. The voice work is reminiscent of 90s cartoons, with over-the-top villain voices and goofy, gawking sidekicks. Perhaps if there were more instances of this it wouldn’t come off as on-the-nose as it does, but at the same time I can appreciate what the creators were going for.

Finally, the game’s performance. Super Daryl Deluxe runs perfectly; not once did I experience any hiccups in the game’s frame-rate or visual fidelity. The one glaring issue I encountered came in the form of quest bugs. On several occasions, there were quests that failed to track my progress correctly, and even one that left me trapped in a side portal with a countdown clock that never ran out. Resetting the game fixed it, but it certainly hindered the flow of the game and, as there is no auto-save, resulted in over an hour of lost progress.

Super Daryl Deluxe is not a bad game, but it is also not a great one. The combat and RPG mechanics are near perfect, with every encounter with enemies feeling satisfying and exciting. Leveling up, experimenting with your skills, and finding and equipping new gear is among some of the richest side-scrolling RPG experiences in recent memory. Unfortunately, the game stumbles over itself in nearly every other way.

It puts its best foot forward to throw absolutely everything you can think of into the melting pot, and what comes out is a visual treat overflowing with needless prose. I absolutely love the inclusion of historical battles, classic literature, and musical pioneers, but reducing each character to a punchline chasing gasbag sours the experience. For those who miss the 90’s-era crazy platformers like Earthworm Jim, Jazz Jack Rabbit, and Dangerous Dave, I encourage you to give Daryl a spin. For everyone else, maybe there’s another indie darling out there for you.