The sword falls and the lands are cursed with another 100 years under the tyranny of Mormo’s reign. It’s your turn to pick up the sword and fight back against the never ending curse.

The Swords of Ditto by developer onebitbeyond and publisher Devolver Digital has landed and with it comes 100 years of destruction and chaos. That is, unless you’re able to fulfil your legend and defeat the evil. A cute action RPG / rogue-like, The Swords of Ditto will push players to race the clock, gather equipment, explore your surroundings and ultimately defeat Mormo. If you succeed the world around you will thrive for the next 100 years, if you fail… well, maybe just try not to fail.

The premise of the game is quite simple. You have 4 in-game days to explore a procedurally generated map full of friends and foes. Within these 4 days you need to achieve as much as you possibly can before you are thrust into a fight with the game’s big bad – Mormo. Finding and destroying her anchors will make her weaker once you finally come up against her and completing dungeons, trials and quests will grant you with equipment, upgrades and stickers that will strengthen you up for the big fight.

The game is a rogue-like. This means that once you’re dead your journey begins back from the start and you never really know what you’re going to be coming up against next thanks to the procedural generation. The game does have some permanence however, so even if you make it all the way to the end and die it wasn’t all for naught. The money you accumulate will stick with you for your next attempt and the amount of stickers (bonuses) you can carry at any given time will also continue to increase, amongst other things.

“Not only is the art and music adorably quirky and captivating, but there’s an actual narrative thread that binds the game together and keeps you absorbed within the world.”

What the game does best is create an endearing world for you to engross yourself within. Not only is the art and music adorably quirky and captivating, but there’s an actual narrative thread that binds the game together and keeps you absorbed within the world. If you are defeated on any given attempt, the next time you try you will see destruction and misery all around you. If you are successful, the world is much cheerier and you may even find a statue or two commemorating the previous victor. It’s simple but it’s an extra step that many other rogue-likes wouldn’t take and it works wonderfully in the game’s favour. There’s also a whole range of amazing characters you can come across that inject so much fun energy into the experience. From your Dung Beetle guide, to the crazy Mormo worshipping cultist, to the pompous sticker collecting octopus, to the mystical time-altering space whale – The Swords of Ditto doesn’t hold back on its quirkiness. 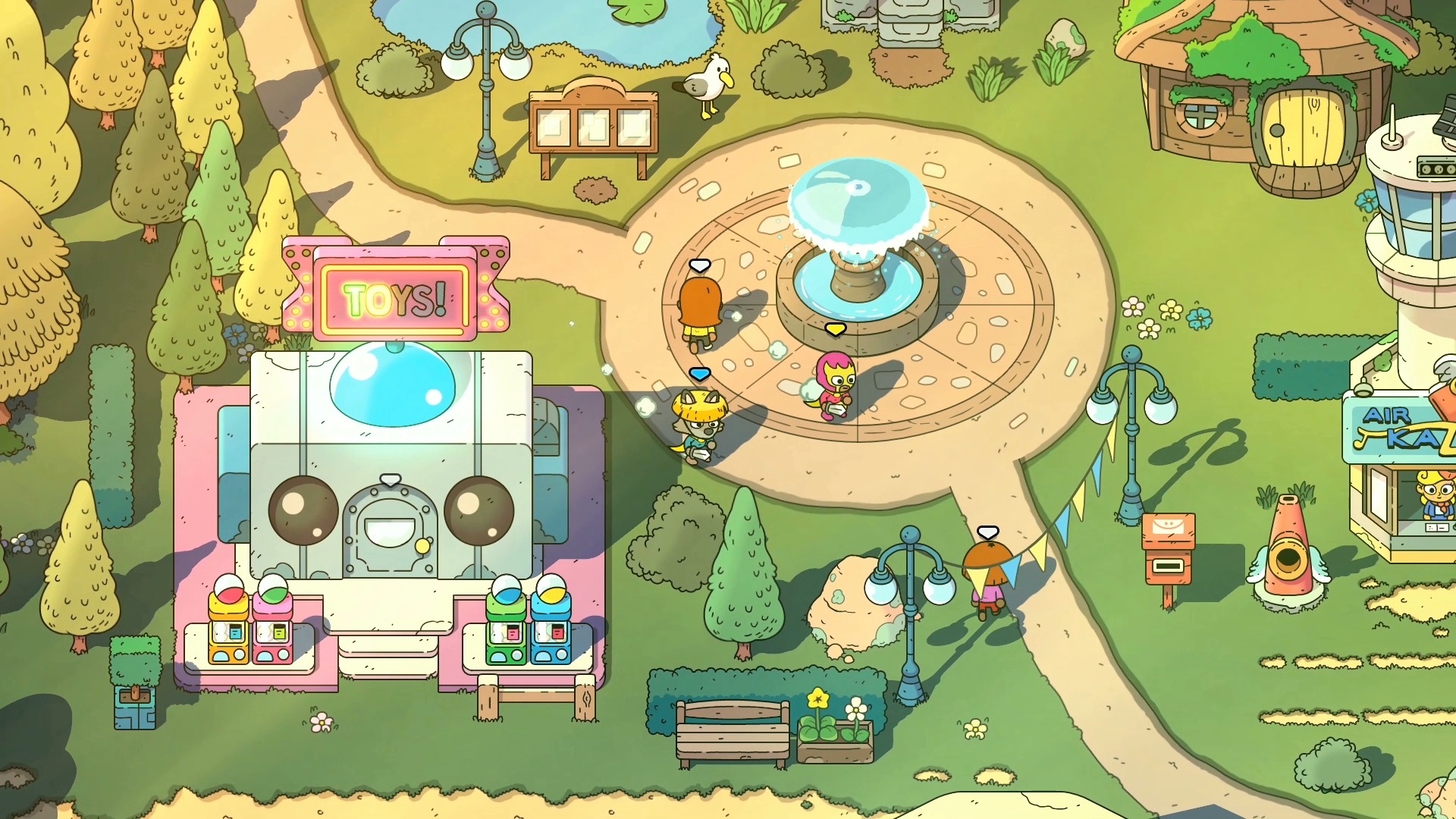 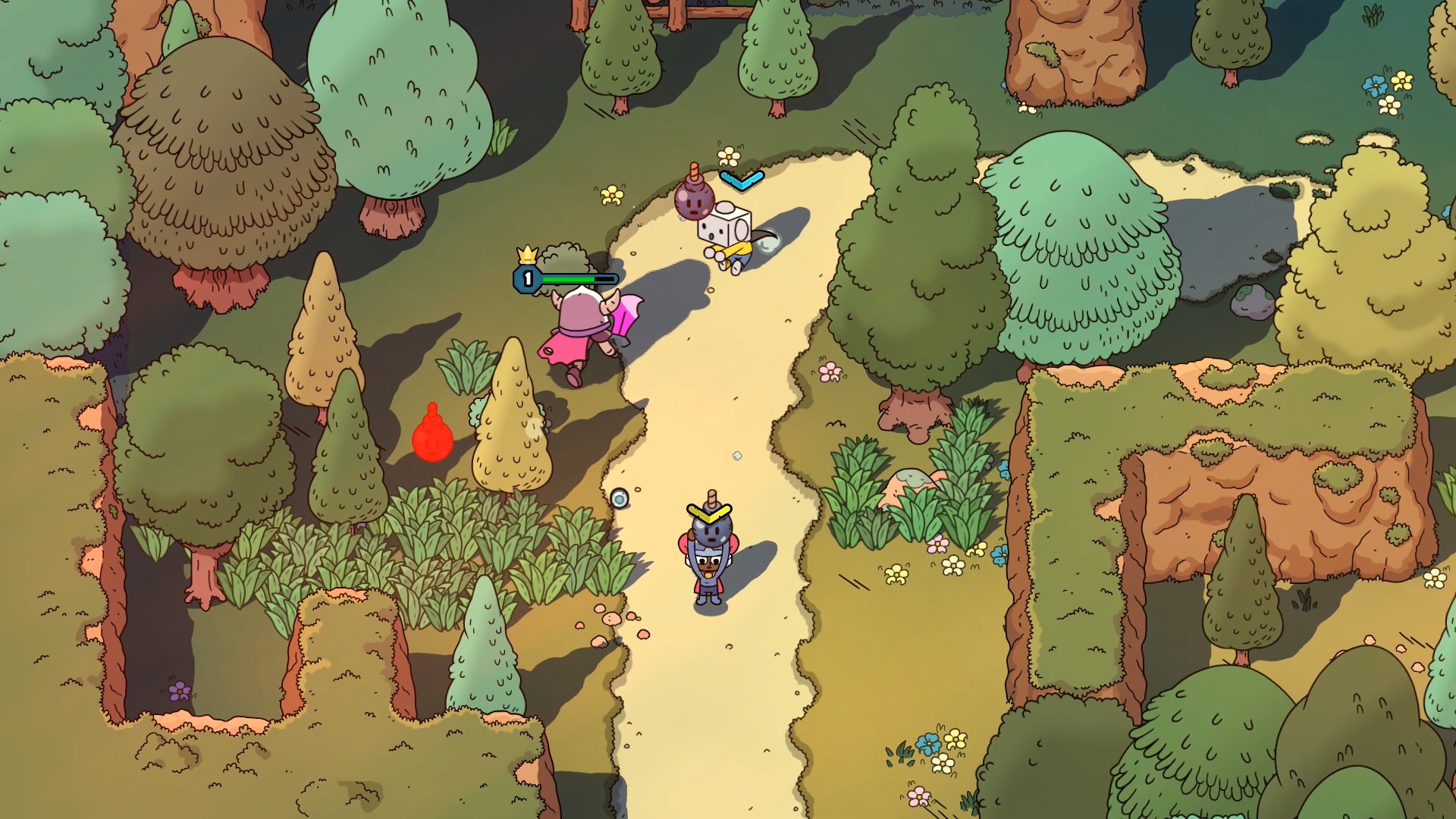 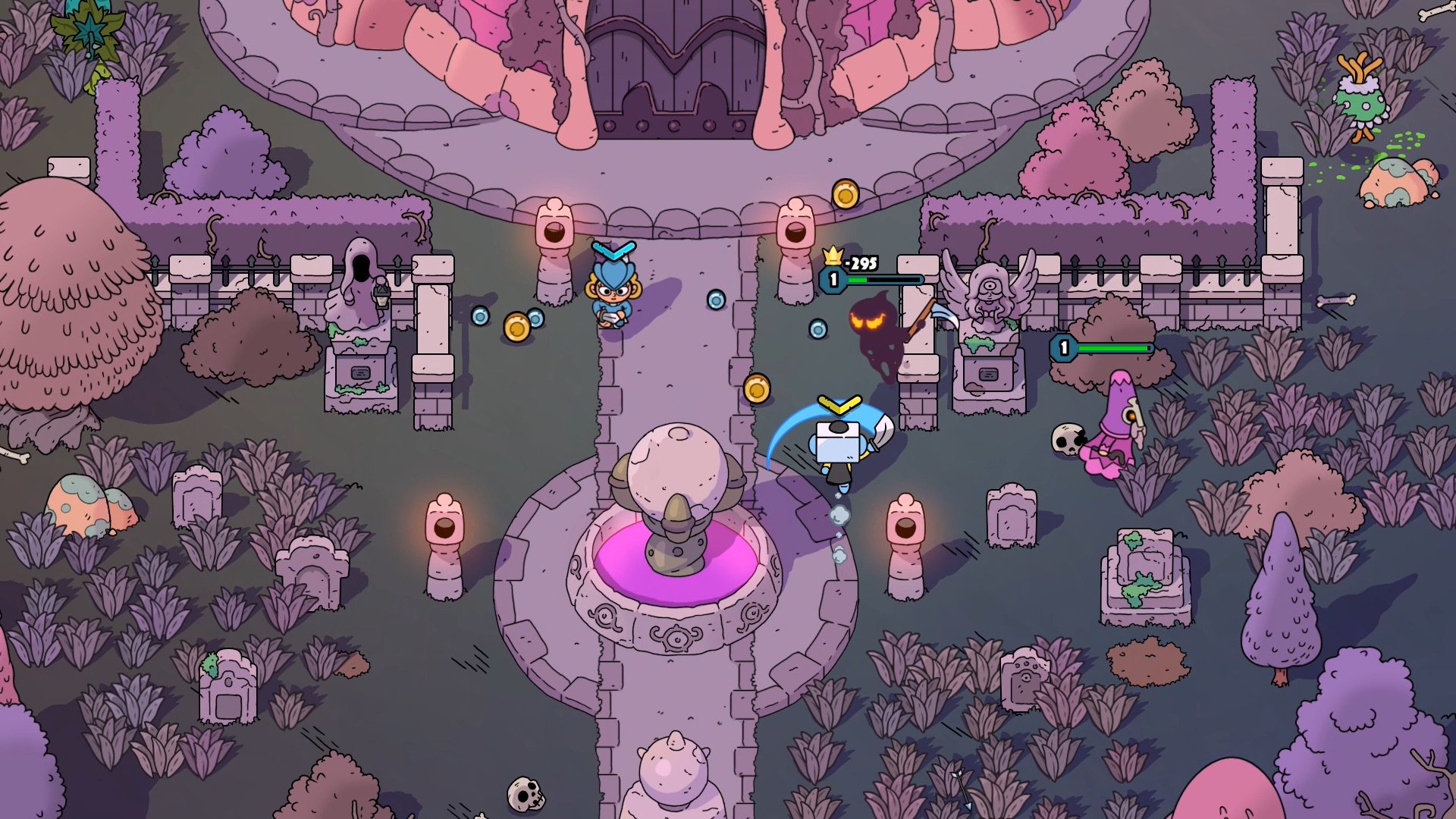 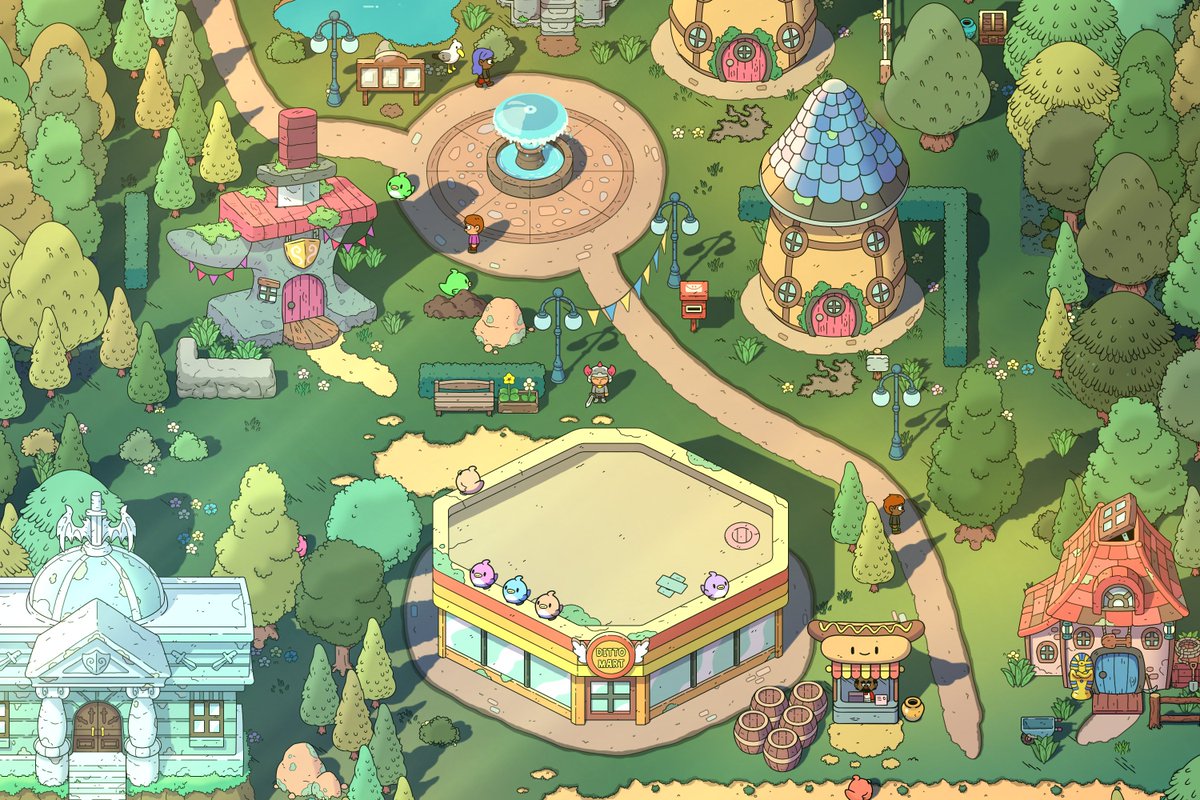 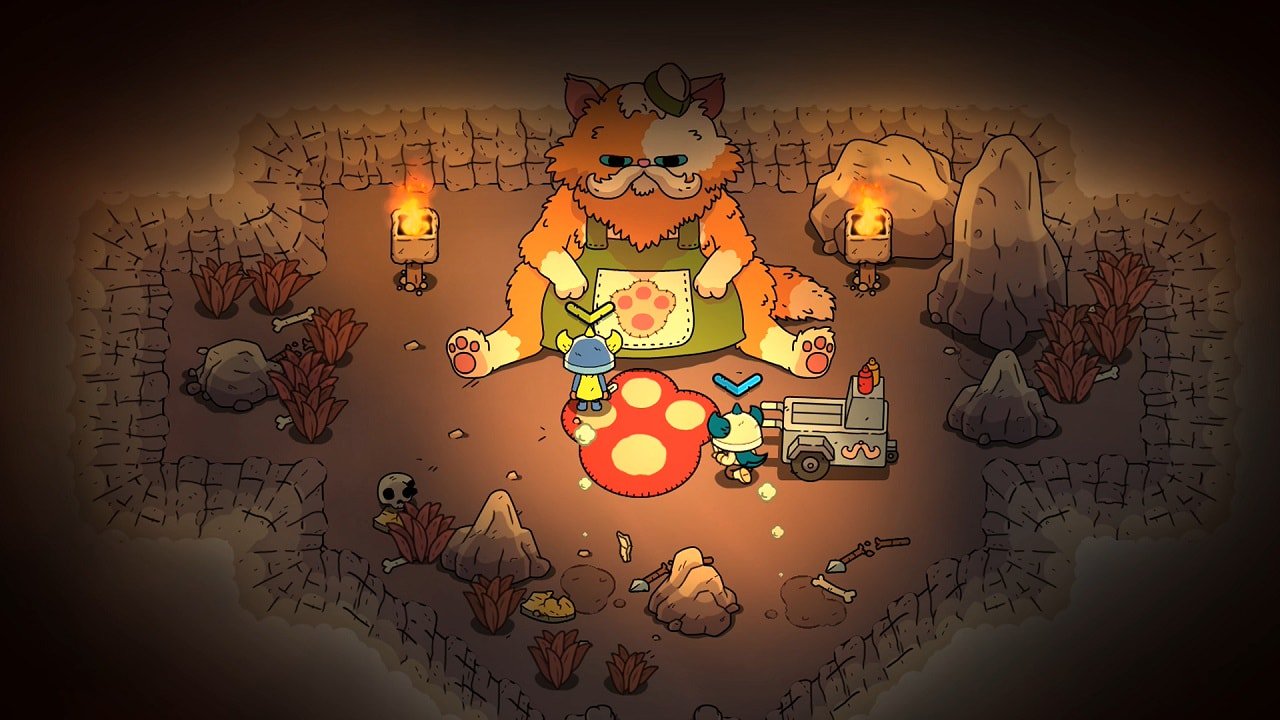 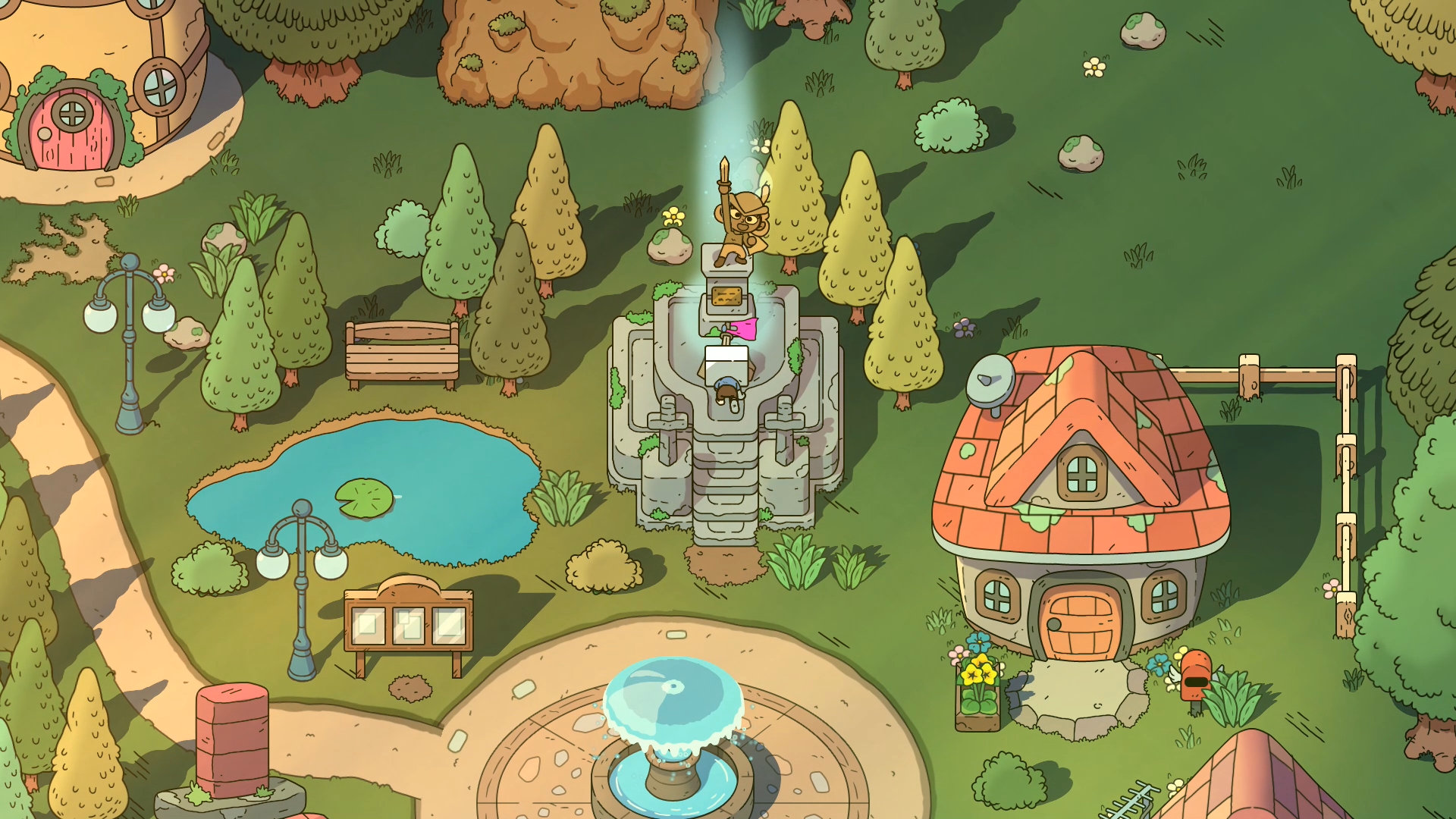 The game’s combat is simplistic but it works perfectly. A few sword swings followed by a dodge roll will be your basic combat manoeuvre, but as you unlock new toys (weaponry) and upgrades, your options in combat begin to open up. I would appreciate a larger range of weaponry and it’s certainly something that could easily be added in the future to further diversify every new attempt. Although of the toys that are available, each does have its uses (sometimes in combat, sometimes outside of it) and I would recommended playing around and diversify each attempt, because playstyles can vary fairly significantly and variety is the spice of life, even in Dittoville.

On your journey you can come across a variety of different NPCs which will help you in various ways. These characters are all really funky and fun in their own right and can change the course of your game significantly. It’s the giant space whale who takes the cake for the most useful NPC and you should certainly hunt them down with fervour if you need extra help. The whale opens up the opportunity to not only give yourself an extra life but also to extend the amount of time you have before the big fight. This can be super crucial. All NPCs are worth finding though so quick exploration is key.

The game’s time limit is an interesting mechanic and one that works in its favour… sometimes. The time pressure is nice, personally. I like that the threat of Mormo feels all the more real by an actual impending deadline to her destruction. The problem is that it also encourages a slightly unfun style of gameplay. I realised after a few unsuccessful playthroughs that the most beneficial way to play the game is to actually ignore huge chunks of the overworld and essentially sprint your way through, looking for more crucial areas. Defeating enemies in the overworld seems like the appropriate way to progress but in reality that just takes up too much of your precious time. Instead, looking for caves or dungeons is much more beneficial because within them time stops. You can then take all the time you need inside the cave to kill foes, break environmental objects and gain loot / experience. Going from map to map already takes a lot of time but it would take far too much time if you killed everything you came across and explored with any level of thoroughness. Instead run through, see if anything stands out (such as a cave entry, NPC, or environmental puzzle), and then move on.

This method of playstyle becomes all the more beneficial when you realise that the kind of upgrades and gear that will reallyhelp you all comes from the big set pieces in the game such as dungeons and NPCS, and from fulfilling quests. All of which is done by exploring the entirety of the map quickly, not thoroughly. It’s a bit of a shame that the game so heavily encourages you to move through its content as fast as you possibly can, rather than appreciate it for what it is.

The Swords of Ditto is a genuinely delightful experience, whether you decide to play it cooperatively or solo. With so much liveliness and character jammed into such a clean and tidy box, it becomes difficult not to become enamoured. The game’s time limit does create some issues for its pacing although it certainly doesn’t ruin the experience as a whole. I can see myself continuing to jump back into The Swords of Ditto time and time again, because the legend of the sword will not die, and I will always be ready to take on that challenge.