Aura of Worlds Review – A world of endless possibilities

After experiencing the pleasure of trying my hand at Aura of Worlds last year at Cognitive Forge’s Australia PAX Rising booth, I couldn’t wait for the finished product. It has been a few months since October and all I can say is the wait was certainly worth it. The retro pixel art-style, alongside a bountiful arsenal of weapons, and relentless foes and stage hazards made this indie platformer an enjoyable experience. Its rogue-like gameplay style is also very addictive; to the point where it becomes a personal vendetta to grasp victory and proclaim it to the high heavens.

In Aura of Worlds the worlds are quaint and cute, with the Grotto of Guidance and the Celestial Temple being two of my favorites, but don’t let their look fool you, as all around you death awaits. Each world requires players to explore their surroundings to reach a door to the next level, all while either attacking or sneaking past your enemies depending on your play style. Being more of an active explorer, I chose fight over flight, which probably wasn’t always the best choice, considering the permadeath mechanic, and my limited health.

Even when I felt like I was in the clear and had no enemies to conquer I still had to contend with the sentient chests who wouldn’t give up their treasures without a fight. On top of this I was almost constantly performing death-defying acrobatics to avoid carnivorous plants, and undead skeleton warriors that would attack me on sight. The difficulty of Aura of Worlds was certainly nothing to joke about, as there was there almost always something trying to kill me – suffice it to say I died a lot. On top of the enemies that pursued me, certain levels had me fleeing for my life as rising lava threatened to roast me, and noxious gas aimed to suffocate me. Sometimes I had to cut my losses and just head for the next stage level. 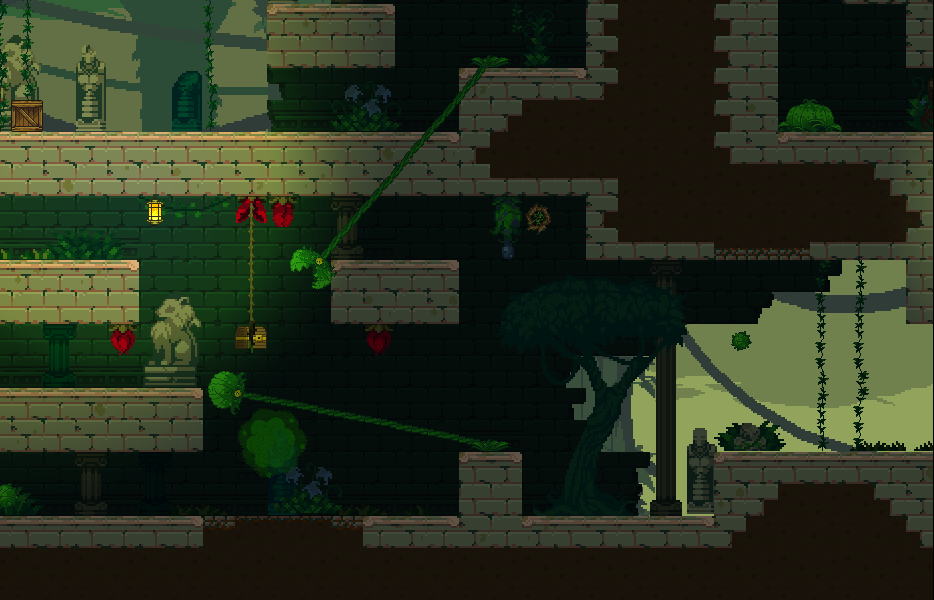 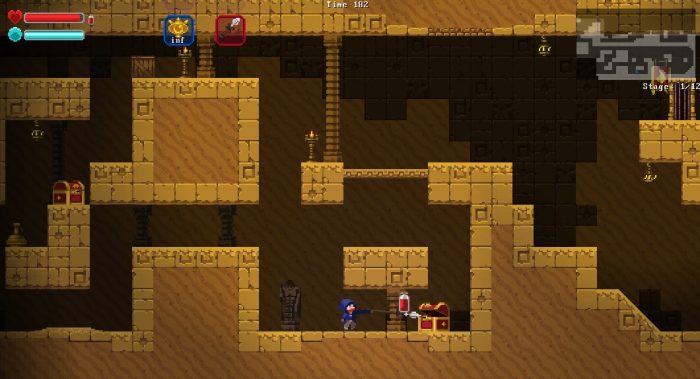 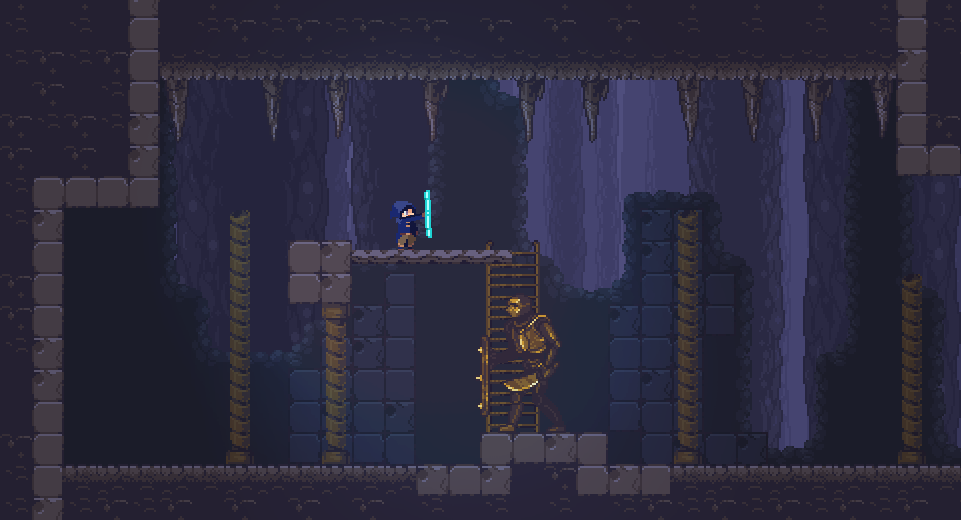 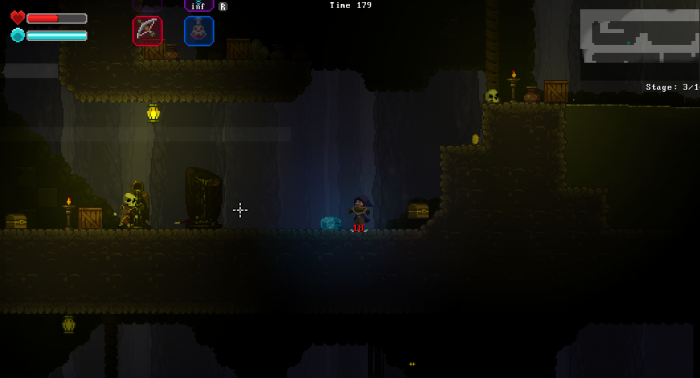 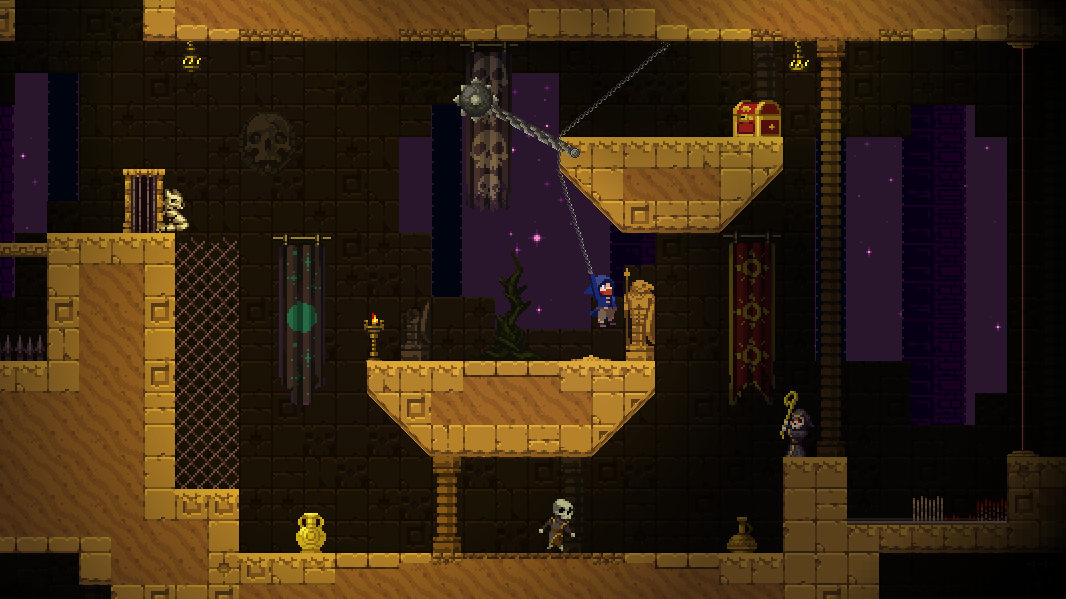 “…each play through is unique, unpredictable, and always feels ‘new’.'”

The fact that Aura of Worlds layout is procedurally generated meant that each play through is unique, unpredictable and always feels ‘new’. Granted this meant finding the exit was harder but with the right amount of moxie and daring I was able to find my way relatively quickly. It would be well advised not to dilly-dally when completing a level, as the timer waits for no one and once it does reach zero, you won’t instantly die, but the ‘surprise arrival’ at “0.00” ensures you won’t waste your time once again.

The choice to reach the next level swiftly or explore the dungeon fully was always a constant factor while playing Aura of Worlds. This was because every few levels a pop-up shop would appear and grant you the opportunity to purchase items with the loot you found while exploring. The coin you had collected would give you beneficial items such as extra health potions, and vampiric tonics that would prove invaluable when your back was against the wall. Each stage had a final dungeon boss that needed to be defeated to progress, and I’m not exaggerating when I say they were some of the hardest bosses I’ve ever had the misfortune of facing. Thankfully the bosses were at least easier to deal with after several attempts as they seemed to be the only part of the game that wasn’t randomly generated.

Artistically speaking, Aura of Worlds was certainly one of those quaint indie games where I learnt to appreciate its pixelated world. The fact that it was all made with a retro spin did not detract from the amount of work that would have had to go into making such a detailed game. Considering that each world is still randomly generated, the backgrounds of the levels are still highly detailed and always feel fresh and vibrant. The soundtrack, while not revolutionary, is still a delight to experience. It has that fantasy role-playing feel that helps draw you into the game and had me humming along, well, at least until I was bobbing and weaving for my life.

Being more of a console gamer myself, I will admit I found Aura of Worlds to be a bit difficult to play as I’m not the best versed in keyboard controls. Thankfully, however, it only took a few missteps and deaths to find my groove while playing, and I had a relatively easy run. That being said I would certainly recommend gamers who are more used to playing with a controller to play with one, as it does offer that function. You’ll already be challenged by the game enough, there’s no reason to add more difficulty to this game.

Aura of Worlds offered up an indie delight that I simply couldn’t put down. The randomly generated worlds kept gameplay fresh and had me always trying my best to explore as much of the level before racing to the “next level” door. Its difficulty, while particularly tough, doesn’t detract from the experience due to the addictive nature of its level progression and the fact that with a little practice there isn’t a single obstacle you can’t overcome. It’s a solid platformer that any PC gamer would enjoy playing in their downtime.